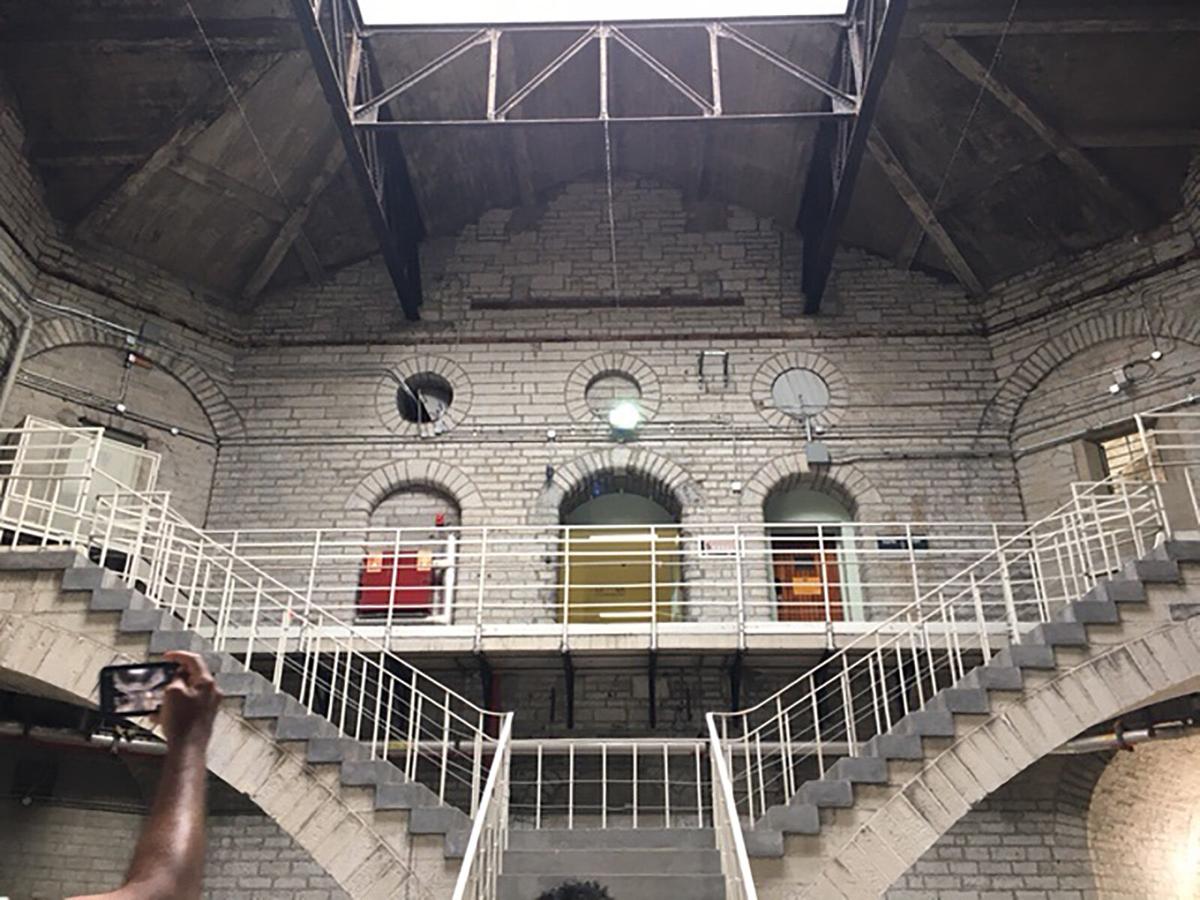 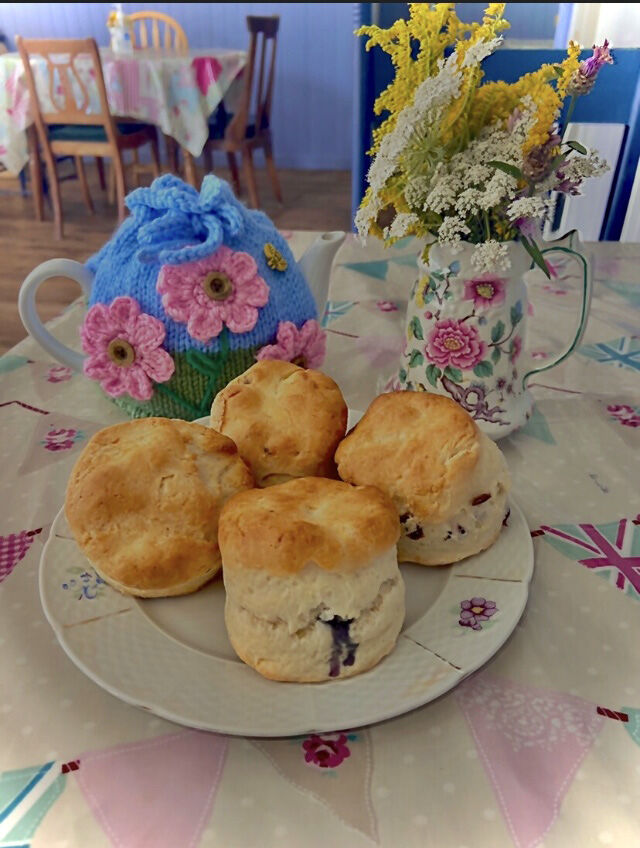 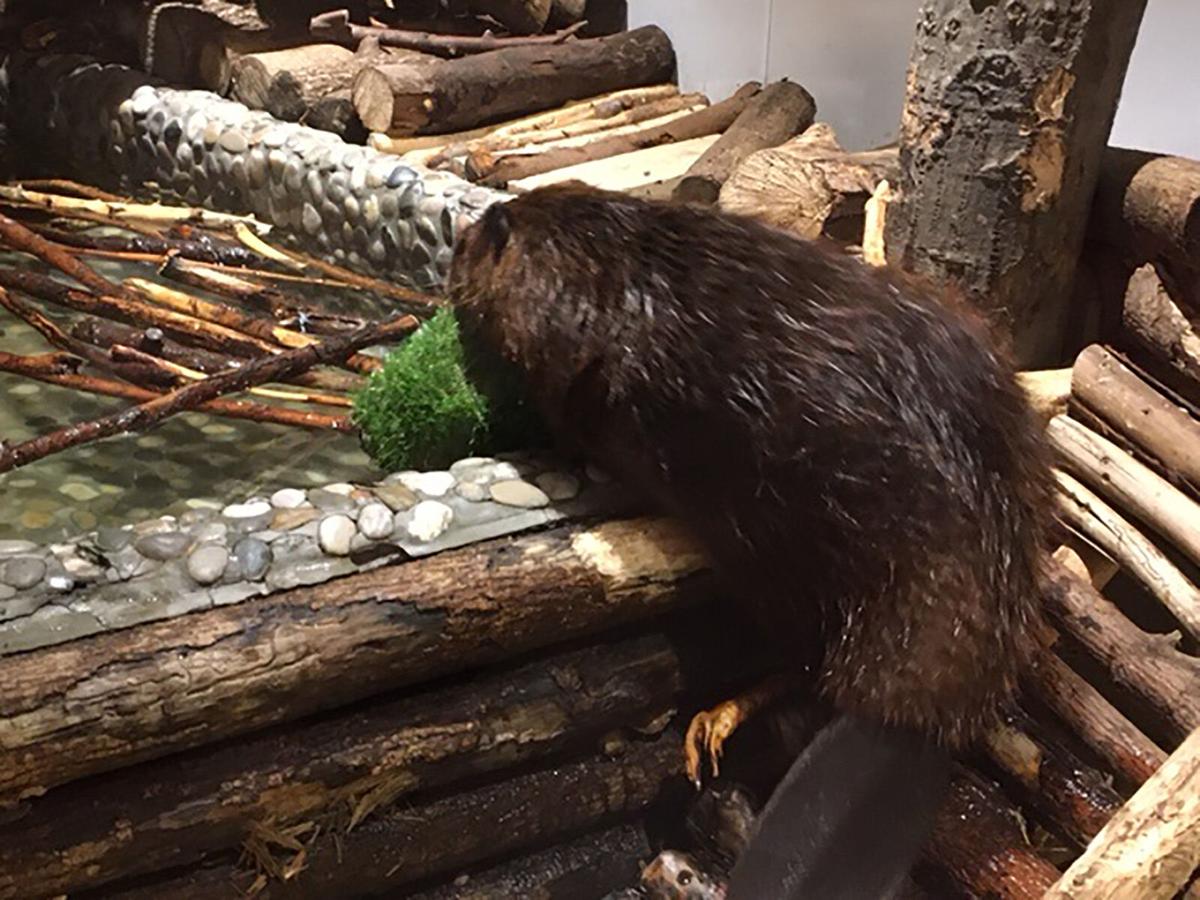 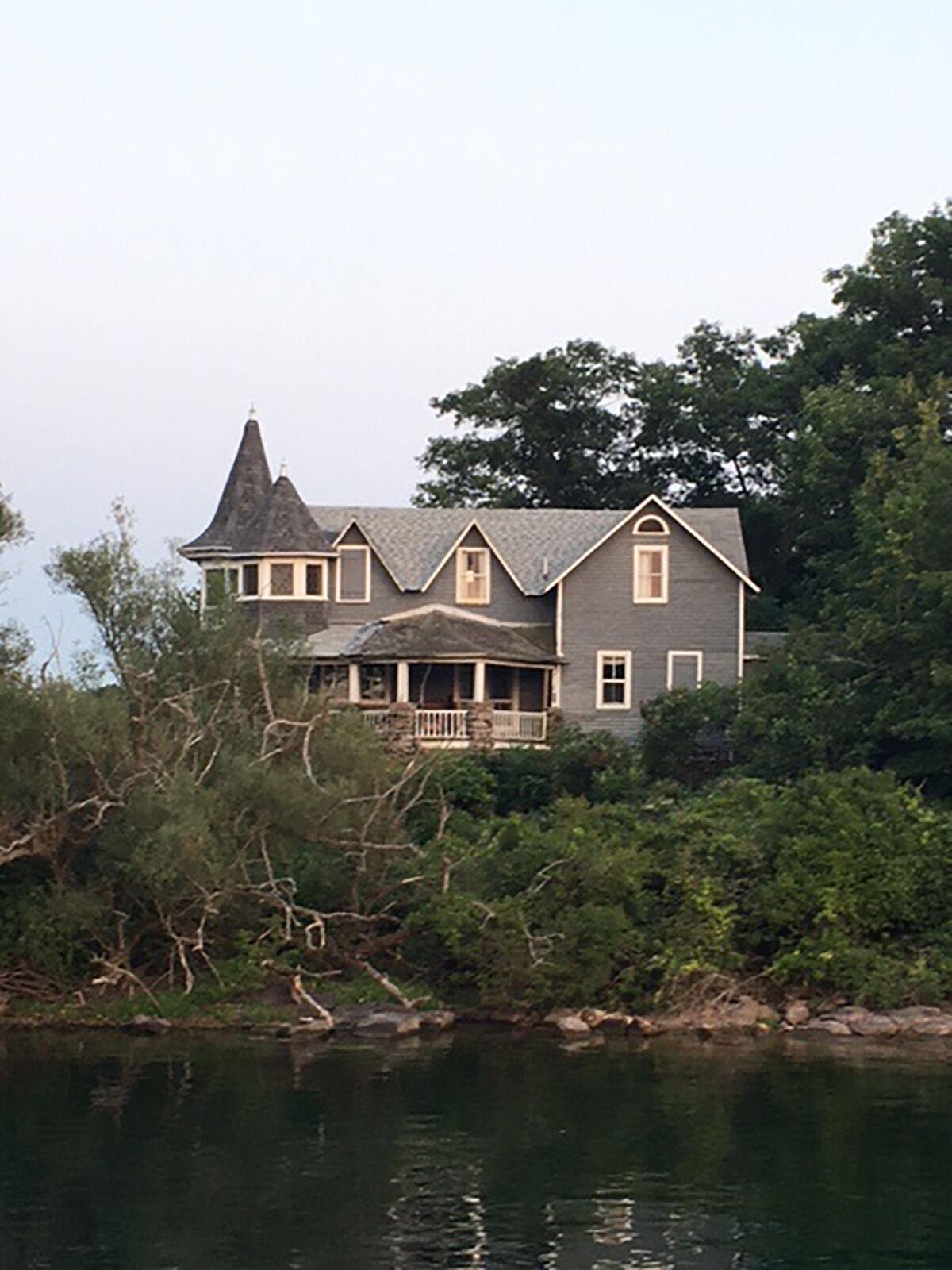 Victorian mansion on one of the Thousand Islands. Carol Ann Davidson/TNS 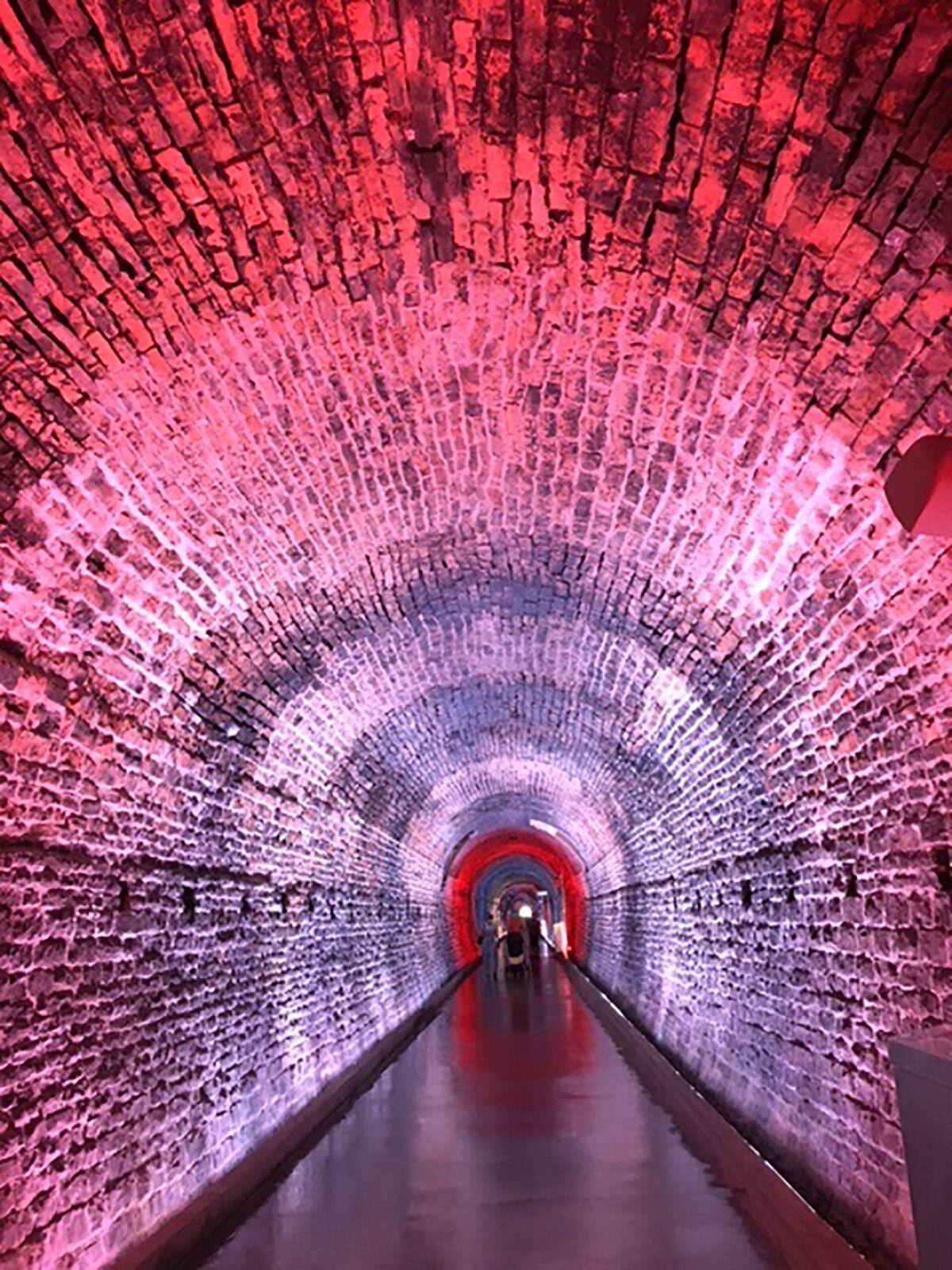 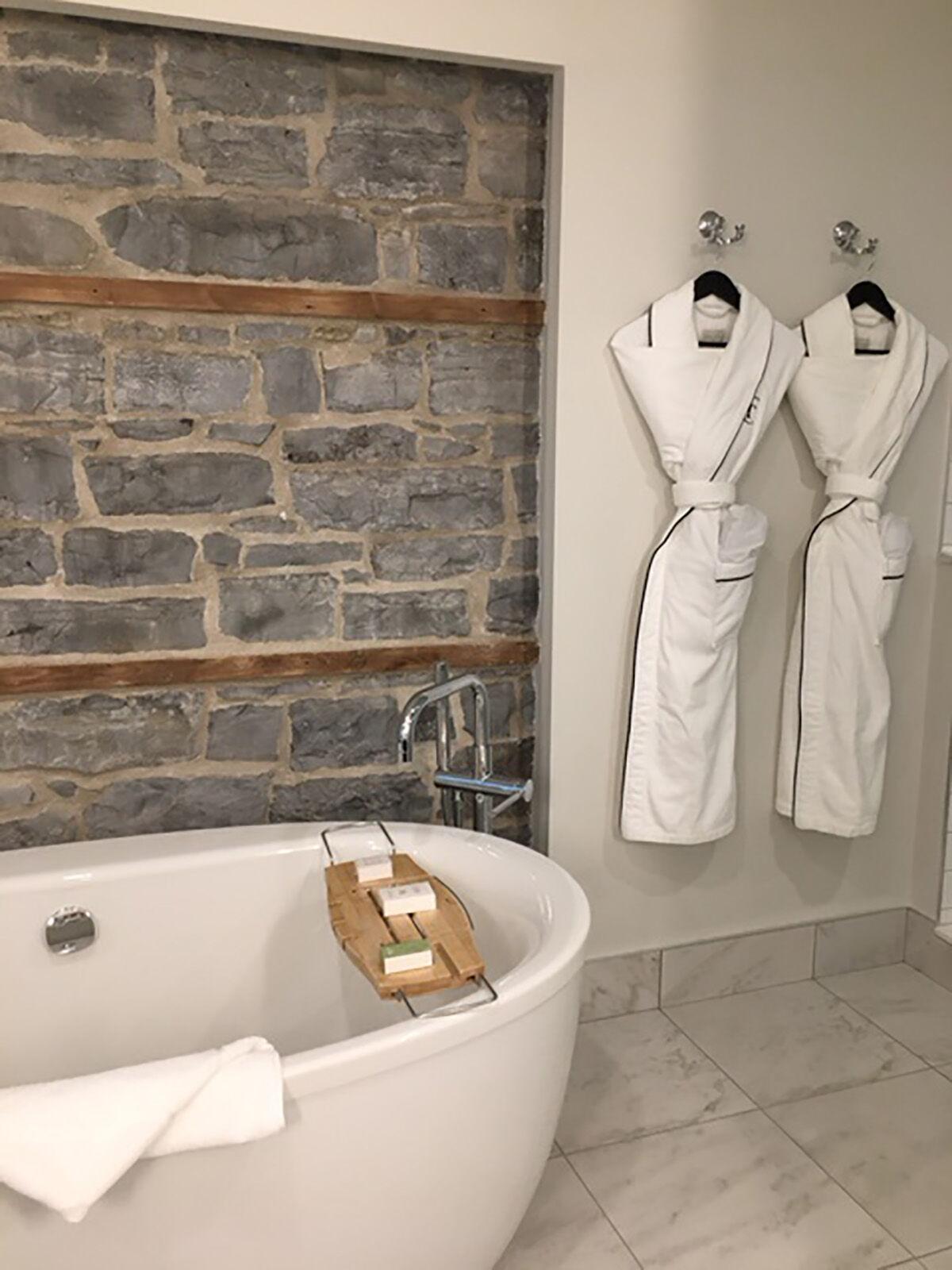 Frontenac Club bath suite in Kingston, Ontario. Guests of Travellers Choice have already anointed it in the top 1% of hotels in the world. Carol Ann Davidson/TNS

Victorian mansion on one of the Thousand Islands. Carol Ann Davidson/TNS

Frontenac Club bath suite in Kingston, Ontario. Guests of Travellers Choice have already anointed it in the top 1% of hotels in the world. Carol Ann Davidson/TNS

BROCKVILLE, Ontario — Justin the beaver is busy. When I visited him at the Aquatarium in Brockville, Ontario, he was employing his oversized front teeth in the act of moving sticks and other bits of material from one spot to the next in his watery lodge.

The emblematic Canadian was rescued from a bathtub in a Quebec home, and through the caring ministrations of the staff at the Aquatarium, led by the passionate and knowledgeable executive director, Tom Harder, Justin and his fellow creatures are thriving in the remarkably inventive and creative science center. Children and their parents thrilled to the antics of otters Oliver and Brock, Tina Turner the turtle, and Jeff the snake, who slithered around my arms and hands as, well, snakes do.

What I found absolutely brilliant were the playful interactive activity centers demonstrating the lock system of the St. Lawrence River; the key to unlocking secret doors in recreations of historic homes that dot the island; kids exploring replicas of antique boats that plied this fabled waterway and an intricate web of rope climbing for nautical minded aerialists.

Brockville was one of the three cities I visited during my weeklong stay along the Canadian side of the Thousand Islands anchored in the St. Lawrence River. Gananogue and Kingston completed the trio. There are actually 1,864 islands in the archipelago flowing between Ontario and New York state. Cottages, some dating to the Victorian era, are within sight of both countries. I noticed a flag (half American and half Canadian) waving in front of a cottage on a small island as I cruised by on one lazy afternoon.

This idyllic coexistence was not always the case. During the war of 1812, battleships from both countries exacted lamentable loses.

Today, the sheer beauty of the place seduces boaters of a different breed: sail boats, canoes, personal watercraft, motorboats, commercial barges, kayaks and river cruisers that ferry tourists along, while narrators entertain them with true but seemingly fabulous tales.

Allow me, but a few.

George Boldt, who owned the Waldorf Astoria hotel in New York City, also built the Boldt Castle on one of the islands (the castle is open for tours). He urged his chef to come up with a more savory salad dressing. The innovative chef added a few chopped pickles, representing the green of the islands. The result: Thousand Island dressing as we know it today.

Then there’s the Prohibition story of the ‘20s, when an heiress on one of the U.S. islands paid Canadian booze runners to supply her guests with the inebriating elixir.

Back on land in Brockville, I walked the 1,721-foot-long Brockville Railway Tunnel, built between 1854 and 1860. It is one of the first of its kind in North America. Walking the distance is a wondrous experience: A kaleidoscope of changing colors infuses the vaulted tunnel with dazzling light and highlights the feat of engineering magic.

Noble Suites was my home for two nights. Mr. Noble has a keen eye for history as evidenced in the individually-themed accommodations. Mine was the Caesar and Cleopatra Suite. The spacious suite is endowed with a well-equipped kitchen and overlooks the St. Lawrence, not the Nile nor the Tiber as the name might suggest. Despite its alluring charms, it could use a bit of a refresh.

West of Brockville lies Gananoque, a city of 5,000 with an indigenous name meaning “a gathering place.” I gathered with a boatload of tourists for an hourlong tour of nearby islands on the Hornblower Cruise. A professionally produced narrative, timed in perfect synchronicity with the islands we were passing: Stone’s Throw, Rent Me Out, Polaris Island (a floating mansion) and the 1913 Napoleon’s Hat Cottage built with no right angles-rounded like a hat, to mention but a few.

At 8:30 one morning I and two others joined an expert guide of the 1000 Island Kayaking company for a 3 1/2 hour wondrous paddle. The haunting notes of a single loon echoed as we entered the incredibly beautiful Half Moon Bay while our guide relayed the following story. It was privately owned by a wealthy and generous Canadian who bequeathed it and his island to the community with the stipulation that his tradition of ecumenical services be held every Sunday. Boats still congregate there while the service is serenaded by an organ installed in its own little wooden house by the shore.

Not surprisingly, Gananoque is a major boating hub, and the impressive Thousand Islands Antique Boat Museum is a testament to its long history. Antique boats are showcased in a massive house suspended over the water. Some are owned outright, others are on loan from private individuals. The museum uniquely offers classes in boat making, provides kids with sailing lessons, and offers couples rentals of traditional St. Lawrence Skiffs for romantic evenings among the waves.

That same night I took in “Sexy Laundry,” the featured play at the Thousand Islands Playhouse. With two theaters, the Playhouse is considered one of the five top live theater experiences in Ontario, not only for its idyllic spot on the banks of the St. Lawrence but also for the quality of its productions. “Sexy Laundry” turned out to be a turn on, as evidenced by the audience applause. Three more plays continue into the season, which ends in late November.

My corner room, at ground level of the historic Ganagoque Inn and Spa, featured a hot tub inside and two white Adirondack chairs on the outside patio overlooking the well-cared-for gardens and the soothing activity on the river. Serenity with a view.

The city of Kingston on the St. Lawrence is a portrait in contrasts. Of the approximately 125,000 residents, the vast majority being Caucasian, it is also the home of the Queen’s University, attracting multicultural students from around the world. Kingston homes are constructed from quarried limestone creating a light, welcoming facade, and yet in their midst stands the most notorious and massive Federal Penitentiary in Canada (a former maximum security prison that opened in 1835). Now referred to as The Pen, it is a much-visited tourist site. In 1841 Kingston was anointed Canada’s first capital, which lasted a mere three years. Today it is a beautiful city by the water with Ontario’s oldest public market and a new, hip feel fathered by a happening music scene and the most restaurants per capita in Canada and second only to New Orleans in the U.S.

I recommend The Kingston Trolley Tour, which wends its way around the downtown core and crosses over a bridge to Fort Henry to the Canadian Forces Base with its scattered reminders of the role Kingston played in the the War of 1812. Further afield, we passed a stone building, now moribund but which once housed the criminally insane. It is rumored that ghosts still haunt it.

We stopped in front of a castle that was built for a wife who died before she crossed the Atlantic to join her husband there. We rolled down Downie Way, a memorial to Gordon Downie, the deceased lead for the Tragically Hip, who had lived in Kingston.

The penitentiary tours are a must: history, art, architecture and film. I chose the film which actually included snippets of the other three. With dramatic flair, our guide, Mike Bullet, created a picture of what it was like to be imprisoned there, leading our tour from tiny cells to the grand central staircase, barbed wire fences to the vaulted workrooms where inmates were taught useful skills. All served as backdrops for dozens of films shot. Here’s a case in point: Netflix series Alias Grace, based on Margaret Atwood’s novel about the incarceration of Grace Marks who was convicted, along with James McDermott, of murder.

Moving from the past to the near future, “Humour Me” and “With Open Mouths” greeted me at the Agnes Etherington Art Center on the Queen’s University Campus. So, too, did its dynamic and visionary director and curator, Emelie Chhangur. The two installations, plus the “sacred room with the Rembrandts (Agnes has four, more than any other art gallery in Canada), contrast the scope and significance of the kind of art and curation that makes this venue one of the most progressive and inclusive in Canada. From the old world view of how to display art and to the new, interactive concepts, this impressive gallery honors the forward looking patron, Agnes Etherington, who was a force is championing the arts scene in Kingston and whose home she willed to Queen’s University to be used as a community art center.

Frontenac Club: One of the best boutique hotels I have ever had the pleasure of staying in resides on King Street in central downtown Kingston. Though the hotel opened mid-pandemic, guests of Travellers Choice have already anointed it in the top 1% of hotels in the world. The elegant building was originally a bank, dating to 1845. It then morphed into a club, inhabited by the likes of Alexander Graham Bell, Carl Sandburg, Muhammad Ali Jinnah and, far more recently, Michael Ondaatje. There is such a rich history that the hotel has a resident historian and raconteur, Arthur Milnes.

In 2017, Sean Billing and partners transformed it yet again, into a sleekly modern and welcoming environment. Stepping from the stone exterior into an interior crisp of whites, blacks and grays gives a preview of the 20 rooms’ refreshingly modern designs. In my spacious Locomotive Suite, a state-of-the-art electrical system allowed for drapes to open and close over the floor to ceiling windows, ‘ignite’ the fireplace and control the lighting design. The bed was a marvel, with its Frette sheets and a mattress I wanted to take home. A soaking tub in the bathroom soothed the soul after a long day of touring.

Because there was so much to see and do, and many more delightful experiences that I could not possibly include here, or no one would continue to read to the end, I leave it to you, dear readers, to visit and explore the Canadian shores of the Thousand Islands.