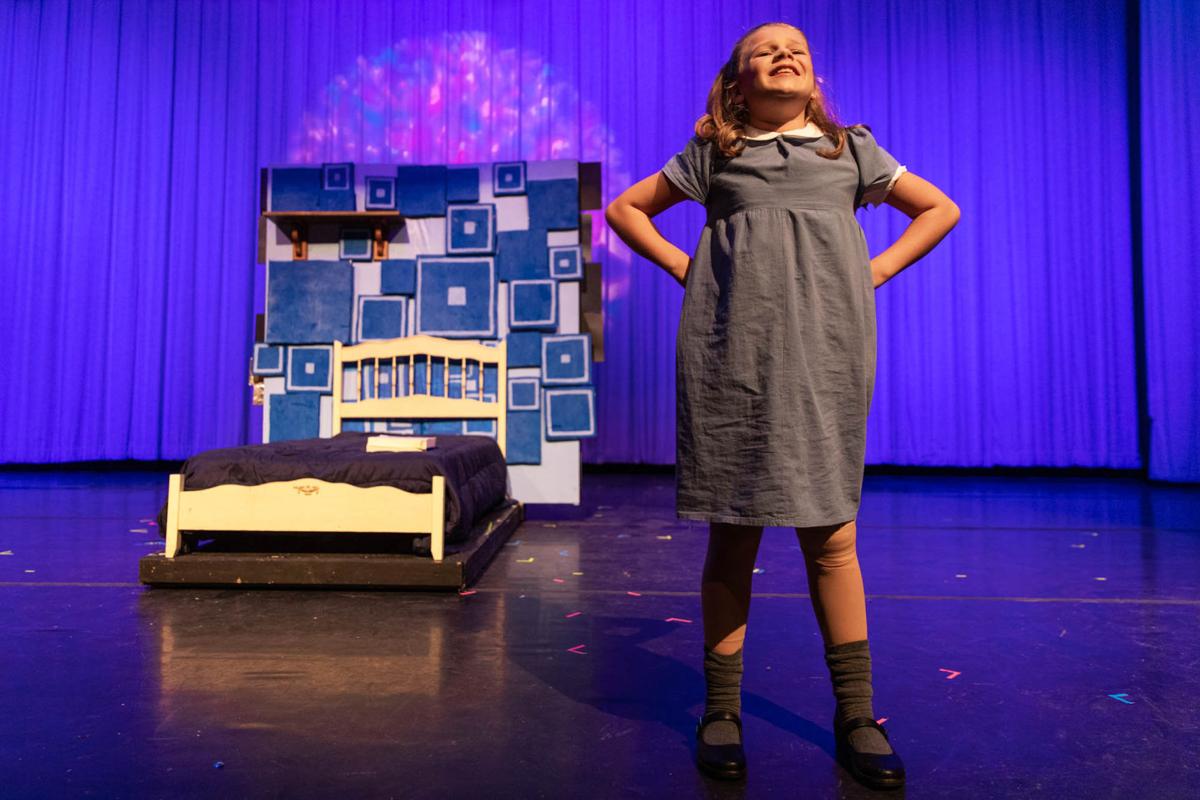 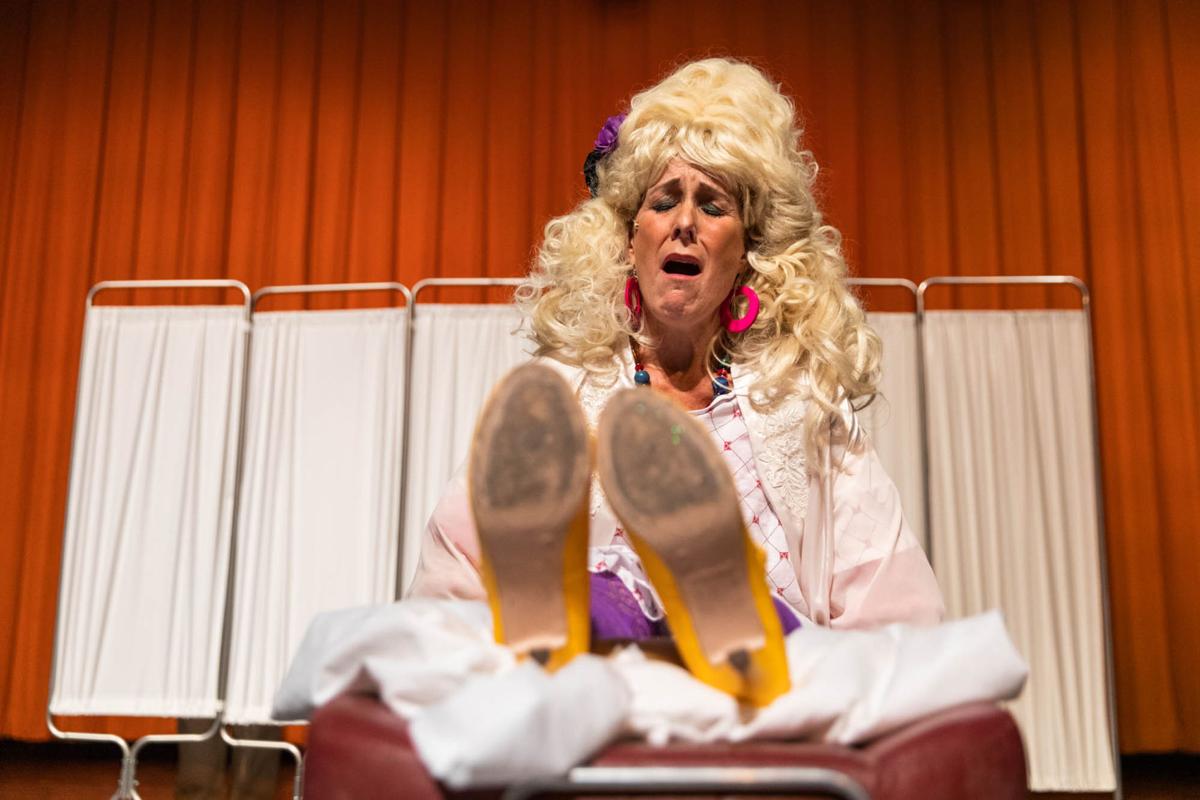 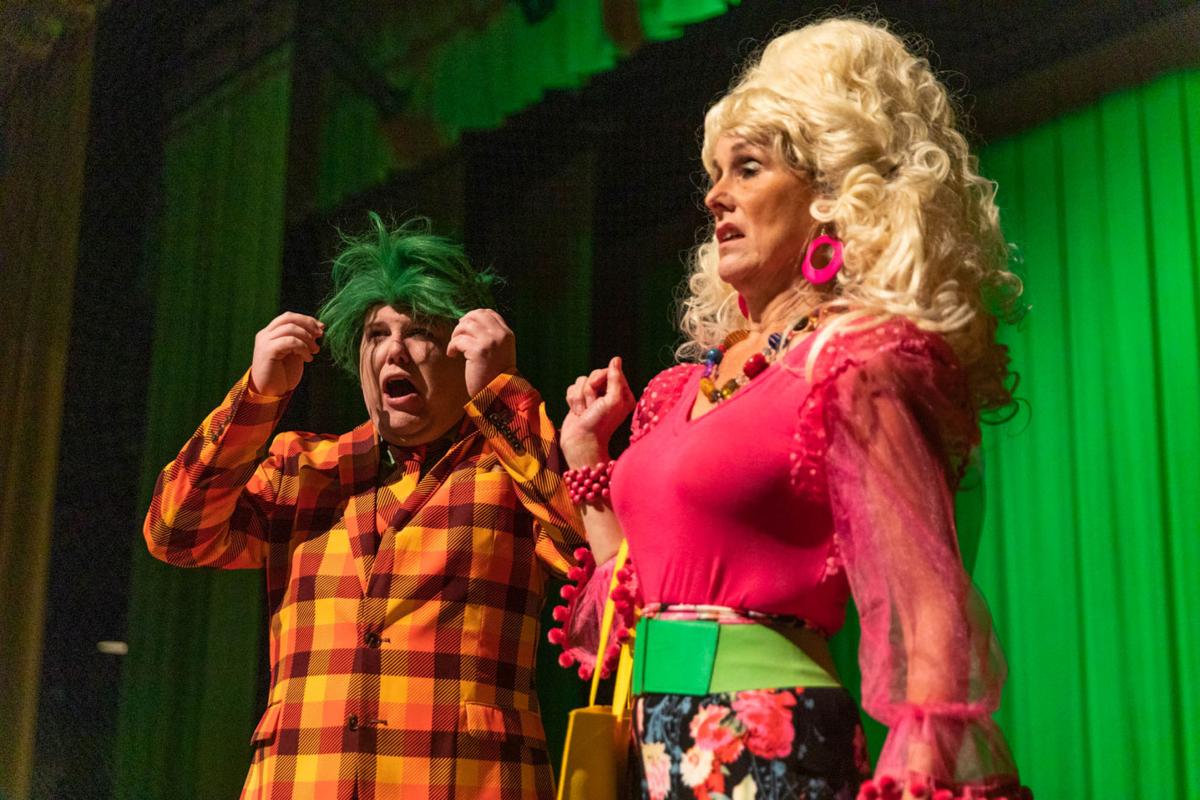 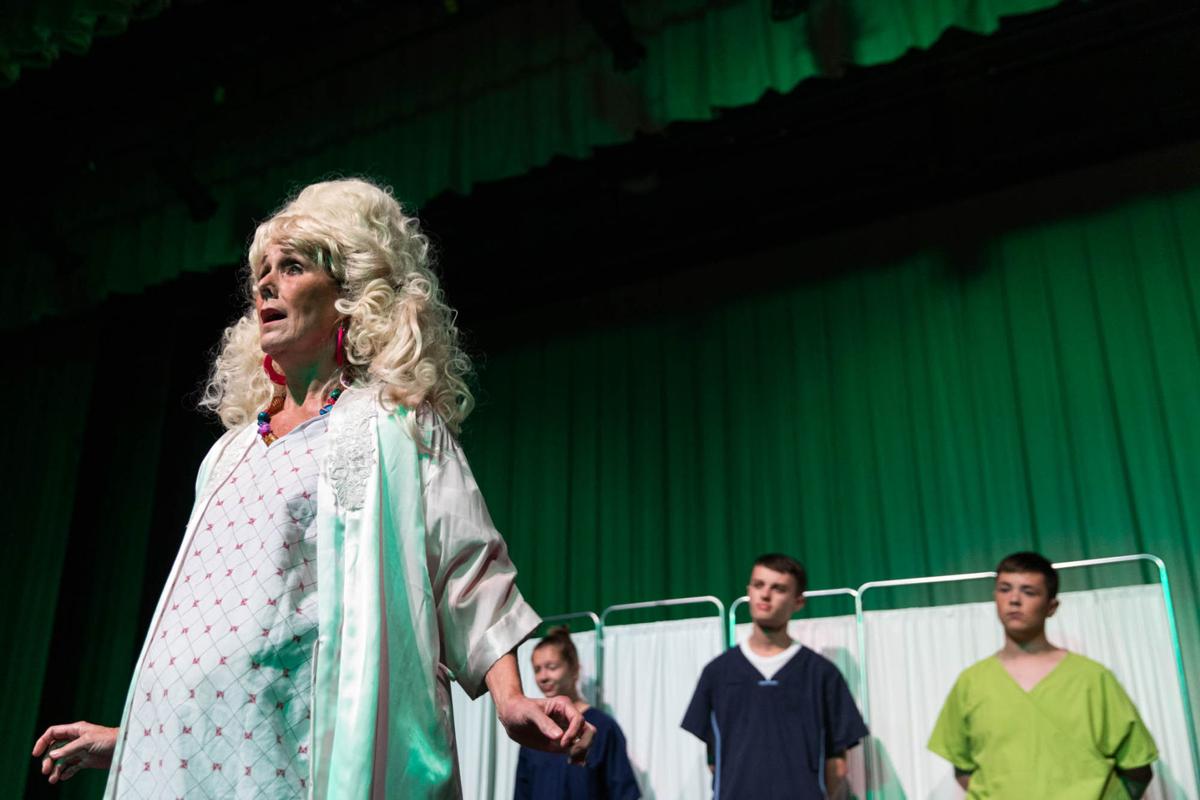 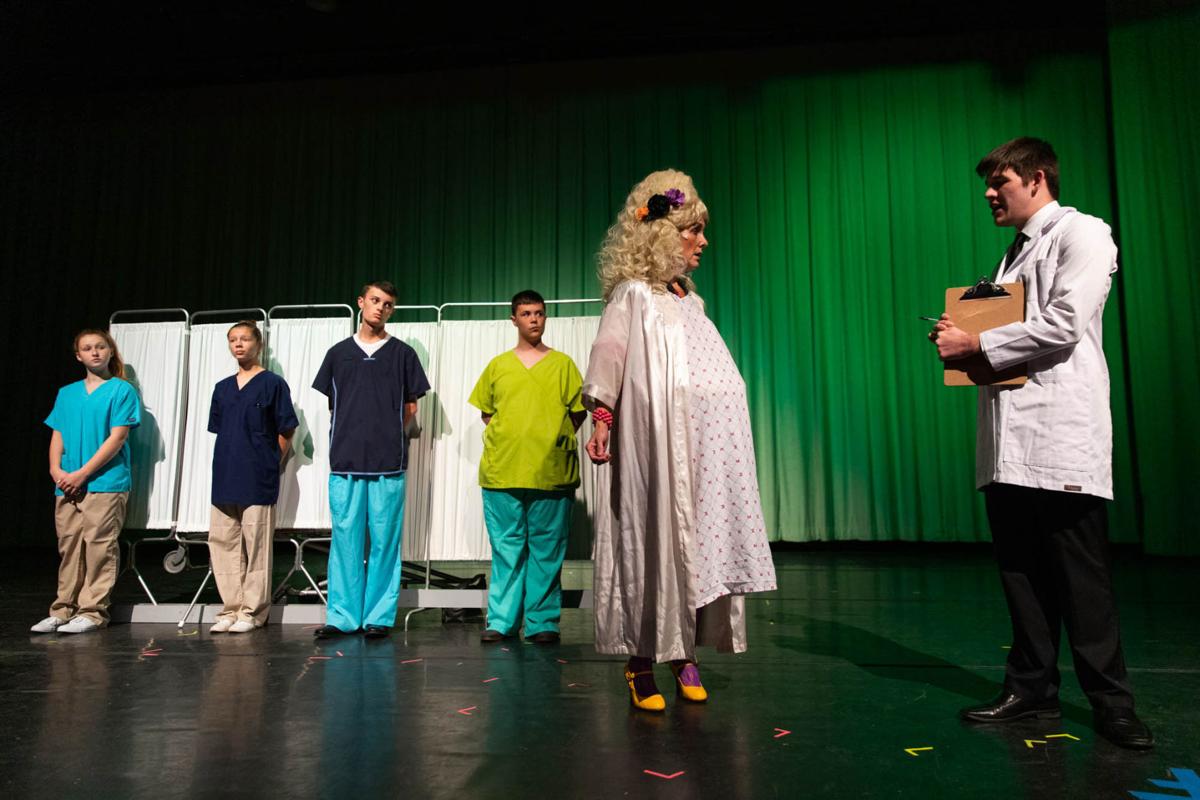 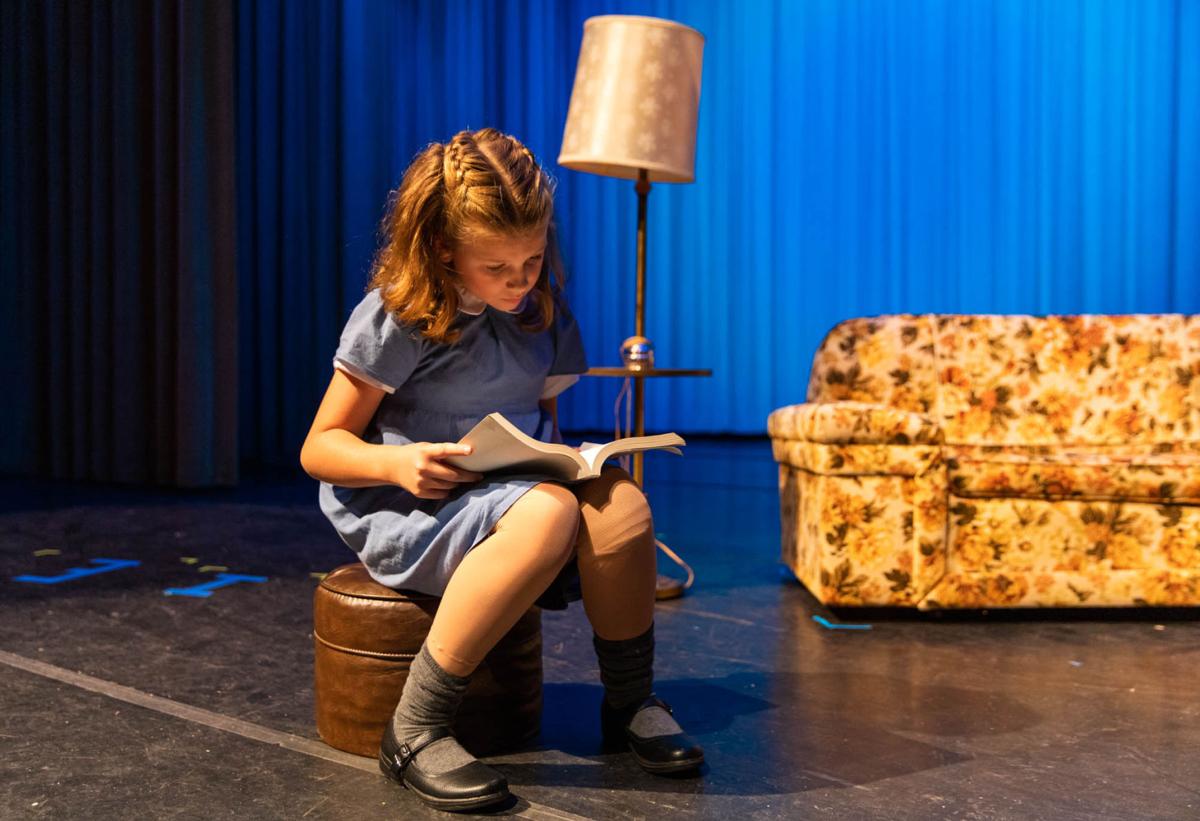 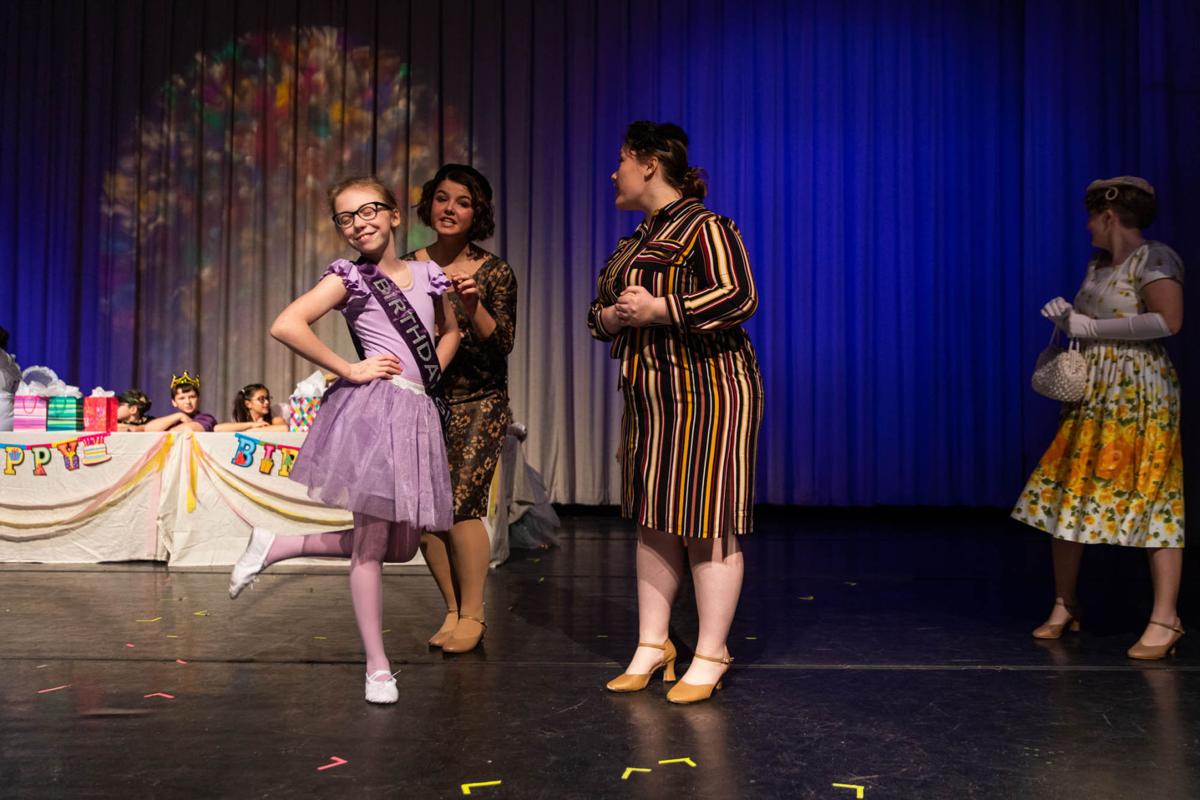 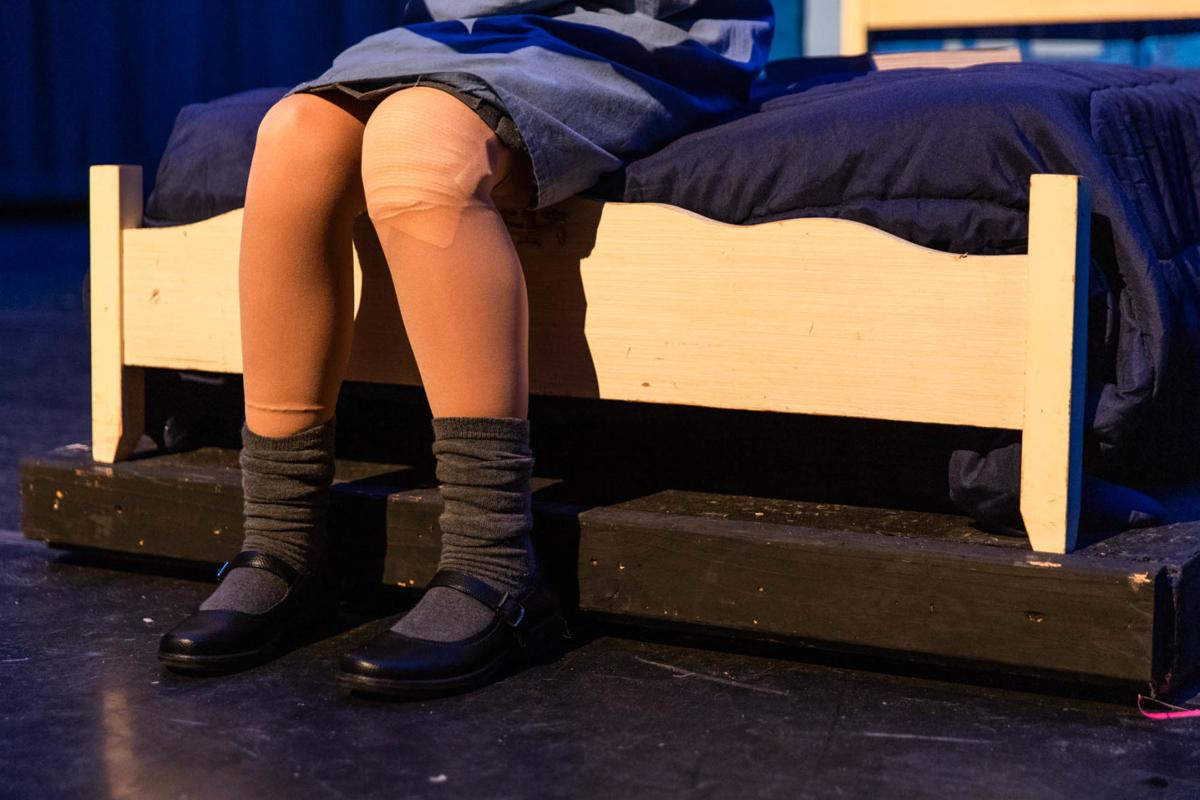 Lexi Zehr, playing the part of Matilda Wormwood, sits on a bed while performing on stage Monday evening at the Dulles State Office Building in Watertown during rehearsal for Watertown Lyric Theater's production of “Matilda: The Musical.” Sydney Schaefer/Watertown Daily Times 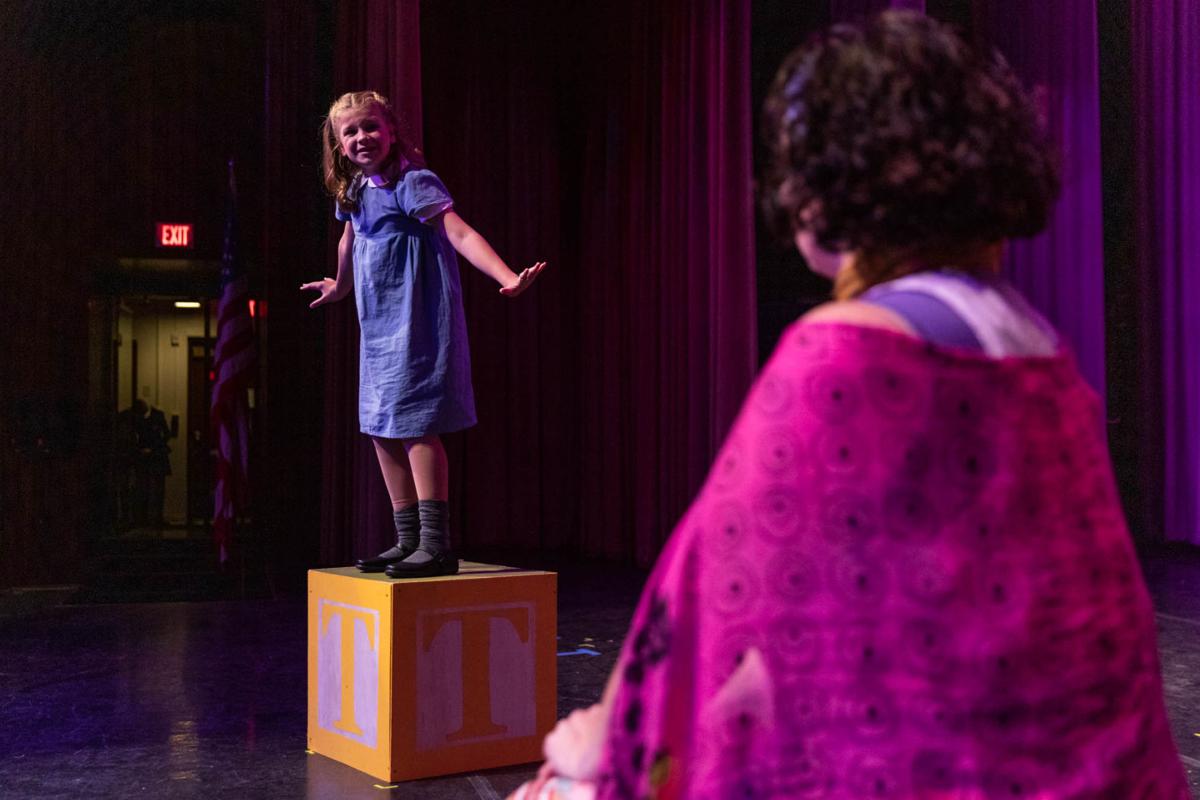 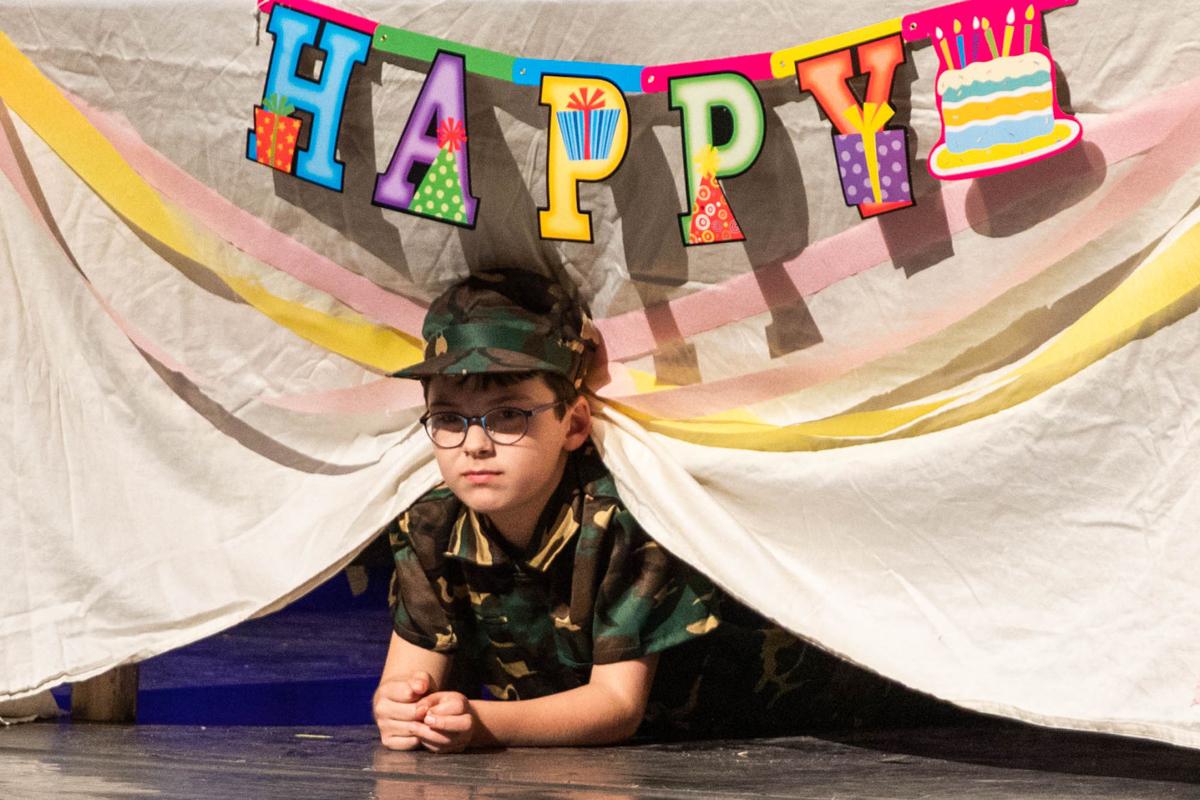 Actor Aidan Cain peaks out from under a table while performing on stage Monday evening at the Dulles State Office Building in Watertown during rehearsal for Watertown Lyric Theater's production of “Matilda: The Musical.” Sydney Schaefer/Watertown Daily Times

Lexi Zehr, playing the part of Matilda Wormwood, sits on a bed while performing on stage Monday evening at the Dulles State Office Building in Watertown during rehearsal for Watertown Lyric Theater's production of “Matilda: The Musical.” Sydney Schaefer/Watertown Daily Times

Actor Aidan Cain peaks out from under a table while performing on stage Monday evening at the Dulles State Office Building in Watertown during rehearsal for Watertown Lyric Theater's production of “Matilda: The Musical.” Sydney Schaefer/Watertown Daily Times

WATERTOWN — “Matilda,” whose story has had an amazing run through book, stage and screen, will share her tale of empowerment beginning tonight for four shows at the Dulles State Office Building.

“Matilda: The Musical” has won a slew of Tony and Olivier awards and the 1996 film maintains a 90% approval rating on review-aggregation website Rotten Tomatoes. The stage show and film were based on the 1988 novel by British author Roald Dahl, who also helped bring to stage and screen such quirky productions as “James and the Giant Peach,” based on his book.

Dennis Kelly wrote the book for “Matilda: The Musical” and its music and lyrics are by Tim Minchin.

Mr. Dahl, who died in 1990, also wrote the classic “Charlie and the Chocolate Factory,” which was turned into a film and ‘co-wrote the film “Chitty Chitty Bang Bang.”

“Roald Dahl’s stories are interesting dark, and complex,” said Ticia Aumell, musical director for Lyric Theater’s production. “People like that. And you can’t lose when you’ve got an adorable girl in the leading role.”

“Matilda” is the story of a 5-year-old girl with a vivid imagination. Combined with a love of reading, it puts her at odds with her family and the diabolical Miss Trunchball, the headmistress of the school where Matilda is sent. But at the school, Matilda discovers she has secret powers. With teacher Miss Honey, Matilda restores a sense of justice to her world.

“A lot of kids have read the book,” said director Daniel R. Davis. “I think it’ll be great fun for the whole family.”

The lead role is played by Lexi Zehr, 11, a sixth-grader at Brownville-Glen Park Elementary School.

Lexi, the daughter of Mark and Tina Zehr, Dexter, said she enjoys the message of the show.

“You can be yourself and not be afraid of who you are,” she said before a rehearsal last week.

“She was one of my ‘rotten orphans’ that I picked on last year,” Mrs. Aumell said. “She stood out last year, so I’m not surprised that she’s come in this year and taken the show away. She’s adorable and very talented.”

“It’s one of those roles that’s more often than not gender-bended,” Mr. Baughn said, adding that his character is a former Olympic hammer thrower. “It adds that extra comedy to have a man portray this beast of a woman.”

Mr. Baughn said there are good reasons why the stage show has won so many awards.

“The music is beautiful and there’s so much depth to the show,” he said. “It’s not just about Matilda and her story through this crazy school. It’s Matilda telling the story of Miss Honey and Miss Honey’s understanding of her life and what can become of it.”

Caitrin McPherson, who plays Miss Honey, said her character embodies some of the struggles of Matilda. Over the course of her first term at school, Matilda and Miss Honey have a profound effect on each other’s lives, as Miss Honey begins to not only recognize but also appreciate Matilda’s extraordinary personality.

“She’s been through a lot and tries to bring hope to the children that she teaches,” Ms. McPherson said. “She tries to lift Matilda up as much as she can.”

On the opposite end of the spectrum is Lyric Theater veteran Tina Thompson, who plays Matilda’s mother.

“She’s full of herself and is addicted to ballroom dancing,” Ms. Thompson said. “Matilda is more of a bother, a nuisance. Unfortunately for my character, that’s how it goes for the whole show.”

But Ms. Thompson says that overall, the show has a positive message.

“It’s OK to be different and have struggles,” she said. “You can succeed and manage through them and become triumphant.”

The music, Mr. Davis said, is equally uplifting. The tunes are a wide mix, from a Latin-inspired tune to the rock ’n’ roll like, “Revolting Children.”

“The lyrics are very smart,” Mrs. Aumell said. “They go well with the music. (Tim Minchin) definitely took ideas from other composers and incorporated those ideas in his music. It’s interesting and intricate.”

Mr. Davis said the show’s special effects were a challenge, especially in one scene involving the mean Miss Trunchbull and the Bruce character who steals a piece of cake.

“So she makes him eat the entire cake,” Mr. Davis said. “We have to make this whole cake disappear — to make like he’s eating it.”

Another challenge was a chalk board scene, where it appears the chalk is writing on its own.

The main cast of “Matilda: The Musical” presented by Watertown Lyric Theater: