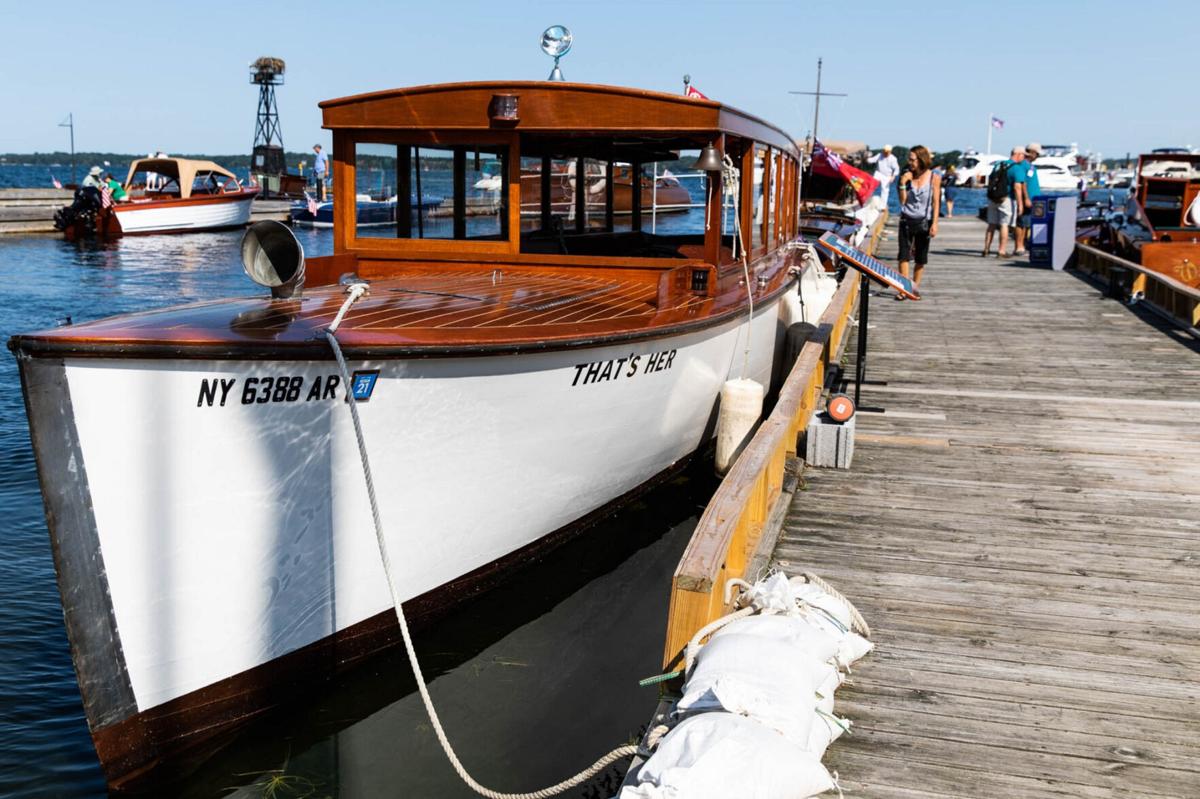 The 1933 ferry boat named “That’s Her” sits on display on Aug. 3, 2019 during the 55th annual Antique Boat Show at the Antique Boat Museum in Clayton. Sydney Schaefer/Watertown Daily Times 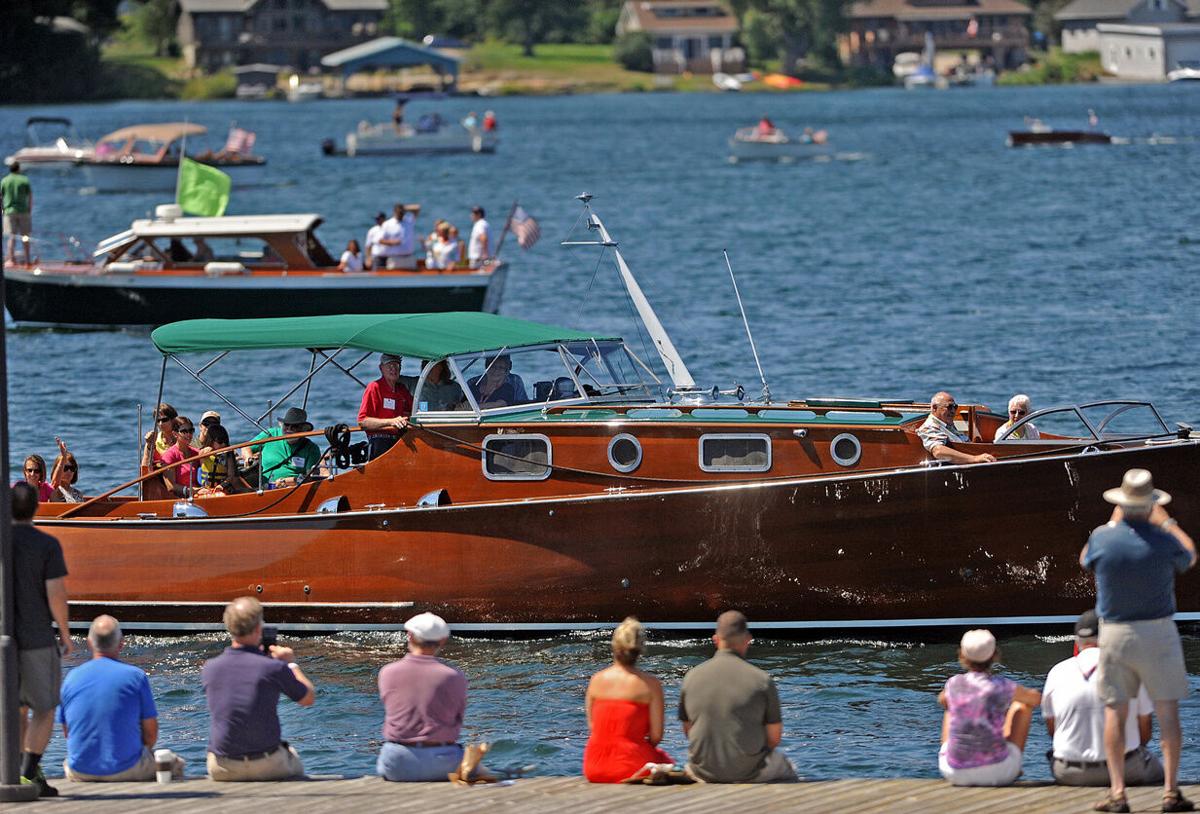 People gather at the St. Lawrence River for the annual boat parade at the Antique Boat Museum in Clayton in 2015. Watertown Daily Times 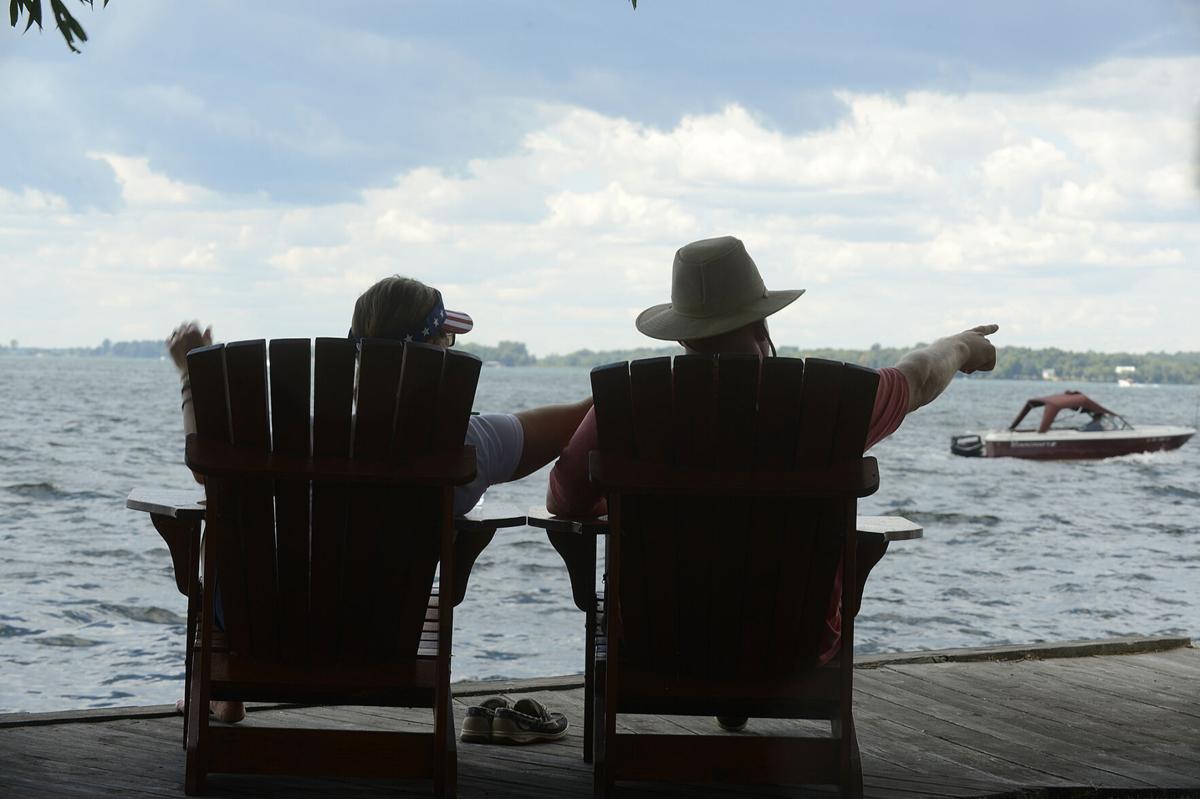 Charity and Jeff Senecal watch boats pass by during the Antique Boat Show in Clayton in 2016. Watertown Daily Times

The 1933 ferry boat named “That’s Her” sits on display on Aug. 3, 2019 during the 55th annual Antique Boat Show at the Antique Boat Museum in Clayton. Sydney Schaefer/Watertown Daily Times

People gather at the St. Lawrence River for the annual boat parade at the Antique Boat Museum in Clayton in 2015. Watertown Daily Times

Charity and Jeff Senecal watch boats pass by during the Antique Boat Show in Clayton in 2016. Watertown Daily Times

CLAYTON — The Antique Boat Museum’s 57th annual boat show returns this weekend, featuring the Boating Legacy of the Thousand Islands and including a show of boats on parade, a marketplace and virtual auction.

The event begins Friday morning and continues through Sunday. The museum, 750 Mary St., was able to host a reimagined show last year, stripped back to its origins.

According to Caitlin M. Playle, events and communications coordinator for the museum, the first couple boat shows were really just parades back in the late ‘60s, so that’s what the museum did last year; two parades around the islands for local antique boats that wanted to join as well as the few who dared to travel and take part.

Because of this reimagining, the show was able to retain its title of oldest continuously running boat show in North America, Ms. Playle said.

“We’ve made it work with high water, we’re making it work this year with low water; we pretty much reimagined it so we could still celebrate antique boats last year,” she said. “It’s a very busy weekend in Clayton between the boat show and my understanding is there’s a state wrestling tournament at the arena this weekend as well, so it brings a lot of people to Clayton.”

In a normal year, the show would see around 3,000 people, but Ms. Playle said she’s not sure how that’s going to vary this year.

According to Ms. Playle, the weekend has started off on a good note, and all the boats scheduled showed up. In total, the show has 80 entries of boats and antique motors in addition to museum collections, and guests are encouraged to visit and see Miss Algonac, a new guest this year and the oldest known surviving Chris-Craft boat.

While this year’s event is a lot closer to normal than last year, there are still some modifications that were done, so there will be a virtual auction rather than a live one and the marketplace is a bit smaller than it has been in past years.

The marketplace, according to Ms. Playle, is a mix of local vendors, as well as those who travel across the state or visit from out of state, offering things from various crafts to used or antique boat parts.

“We officially called it the Show of Boats on Parade Marketplace and Virtual Auction,” Ms. Playle said of the event. “While it’s close to normal, it’s still not completely there yet, we’ve gotten a lot closer than we were even thinking we were able to get back in March.”

The weekend of fun will feature a boat show open to the public Friday and Saturday, as well as river rides, walk-through tours of La Duchesse, children’s crafts and activities, and more.

An awards ceremony will be held at 9 a.m. Sunday, followed by the boat show’s finale cruise to Heart Island. The show concludes at the end of the cruise, and exhibitors and vendors are welcome to pack up and depart, but the museum will remain open until 5 p.m.

A full schedule of events for the weekend can be found on the museum’s website: https://www.abm.org/index.php/events/antique-boat-show-and-auction/.

“In a normal year we go down along the Clayton waterfront and we come back to the museum and that kind of signals the end of the show, but this year we extended it for a longer cruise,” Ms. Playle said. “We normally have an awards brunch and we’re not doing the brunch this year for several different reasons, so we thought instead of just having a five to 10 minute trip down the waterfront and back, we’ll pass by all these places where people can see us where we don’t normally go.”

Some activities for the event require pre-registration and/or the purchase of tickets, and last minute changes to the schedule are possible.

Virtual bidding closes Saturday at 1 p.m. Items will be available for viewing on campus for the duration of the auction. Museum admission is required to view the items in person.

Parking is available at Guardino Elementary, Lions Field, and any available village street parking. The museum’s Community Parking Lot, located at Riverside Dr. and Jane St. behind Watertown Savings Bank, is open to current Friends of the Museum through Sunday. Limited handicap parking is available in front of the museum.

A free shuttle runs during the show from 8:30 a.m. to 5:30 p.m. Friday and Saturday, and 8:30 a.m. until 1 p.m. Sunday between the Guardino Elementary parking lot, the museum, Frink Park, the Lions Field parking lot, and the Don Doebler Collections Storage Facility.

Visitor docking is not available at the museum’s docks during the show. Limited docking is available at the village’s docks at Mary Street Municipal Dock next to the museum, the Rotary Park Docks on Riverside Drive, and the Clayton Harbor Municipal Marina. All boaters must purchase admission to the show in the Mary Street Boat Shop before proceeding into the show unless they are only visiting the marketplace, which is free.

For vehicle and pedestrian safety, Mary Street from Alexandria to Theresa streets will be closed to traffic through Sunday. The Clayton Public Boat Ramp remains accessible via Theresa Street throughout the weekend.