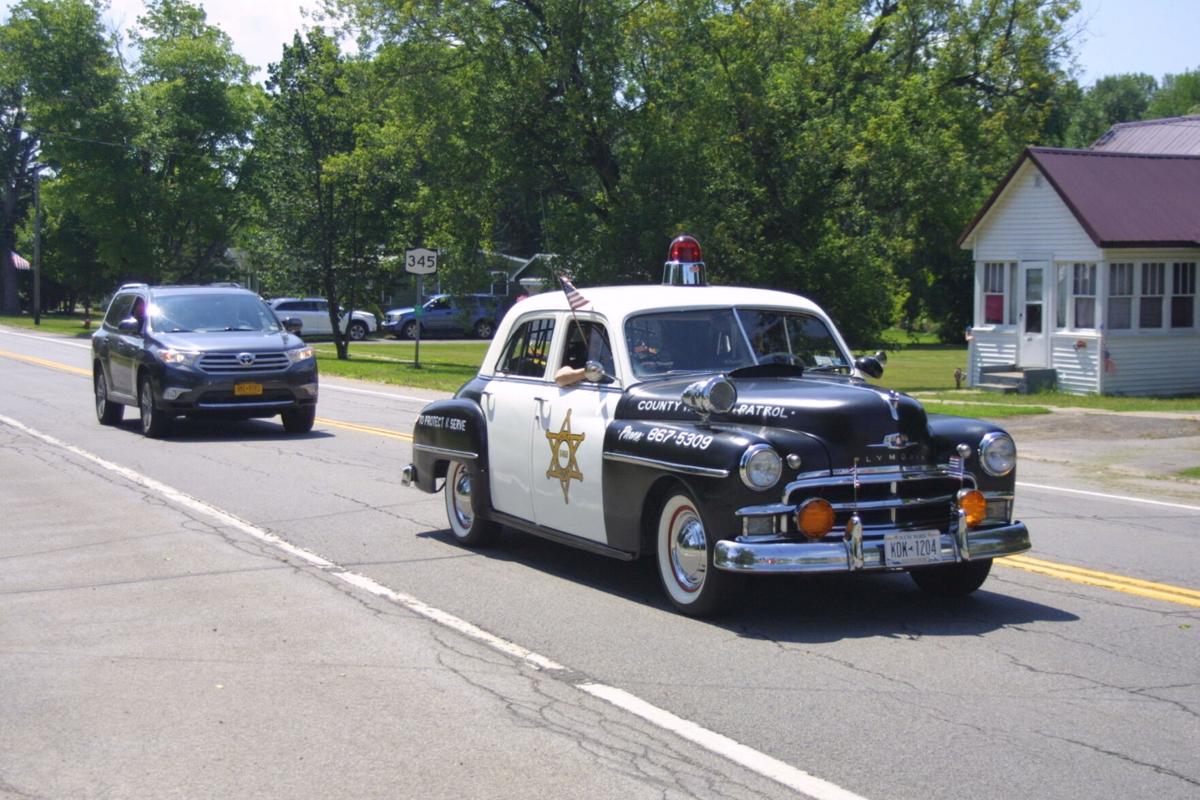 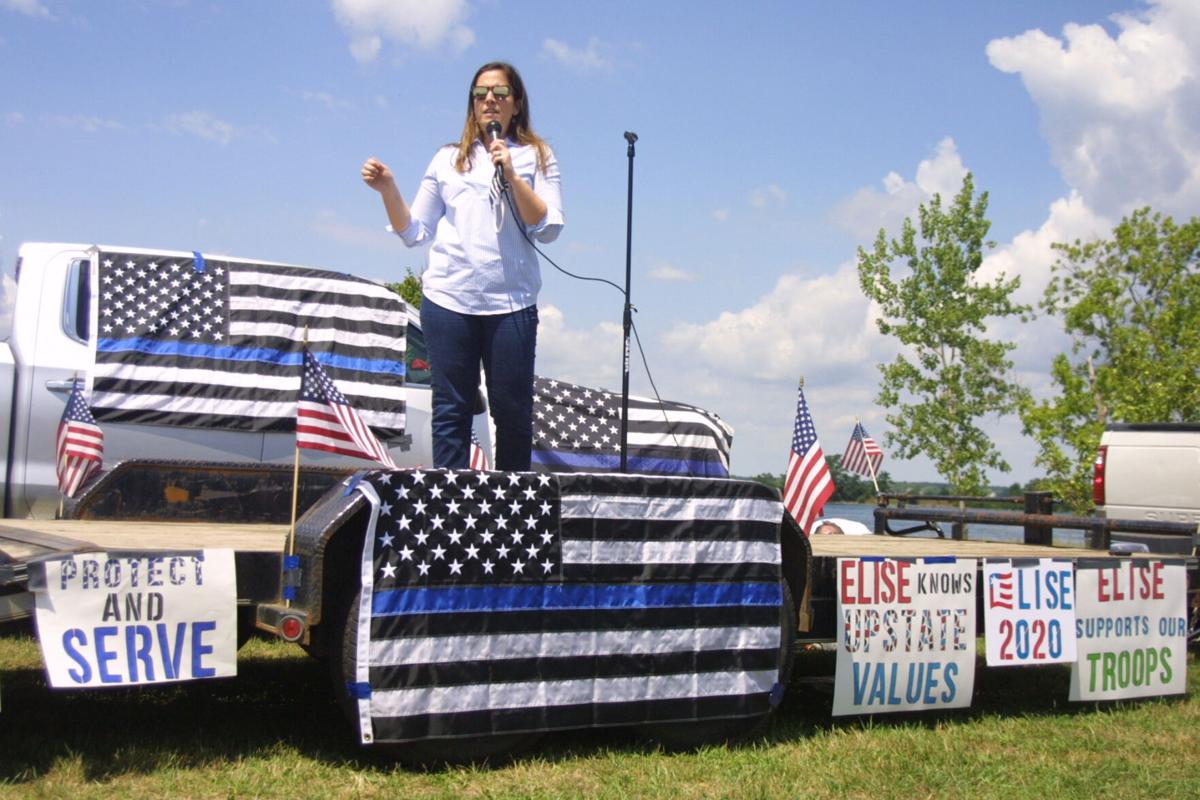 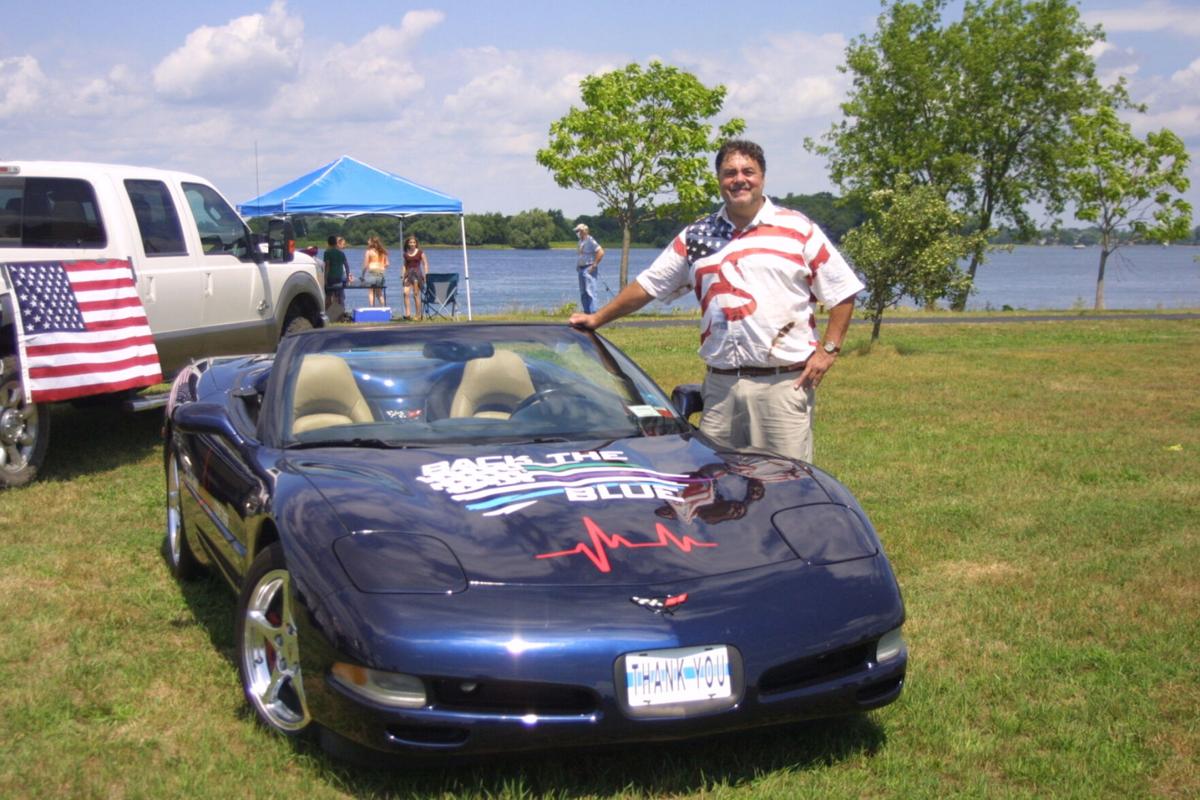 Dr. William Orlando displays his Corvette that has a special message on the front hood: Back the Blue. Dr. Orlando was one of the many participants in Saturday’s “Back the Blue” parade in Waddington. Bob Beckstead/Watertown Daily Times 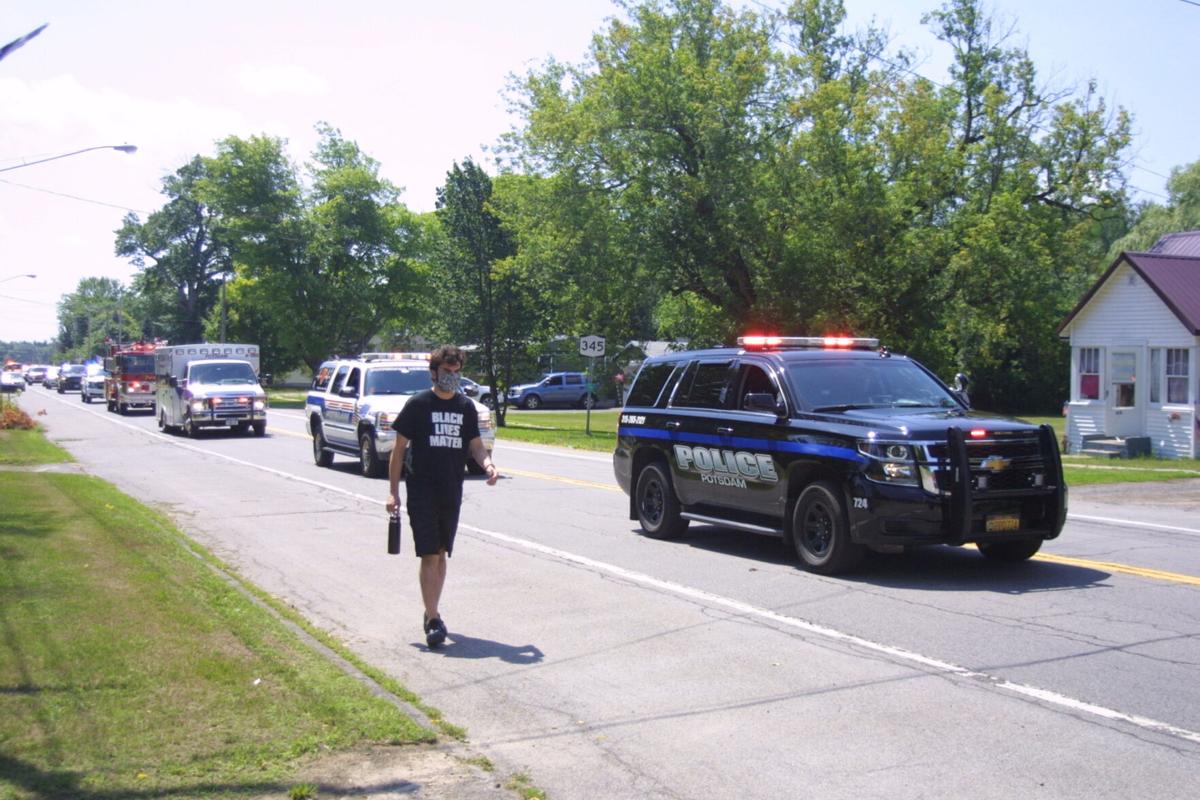 A walker with a shirt that read “Black Lives Matter” walks along the “Back the Blue” parade route in Waddington last month. Bob Beckstead/Watertown Daily Times 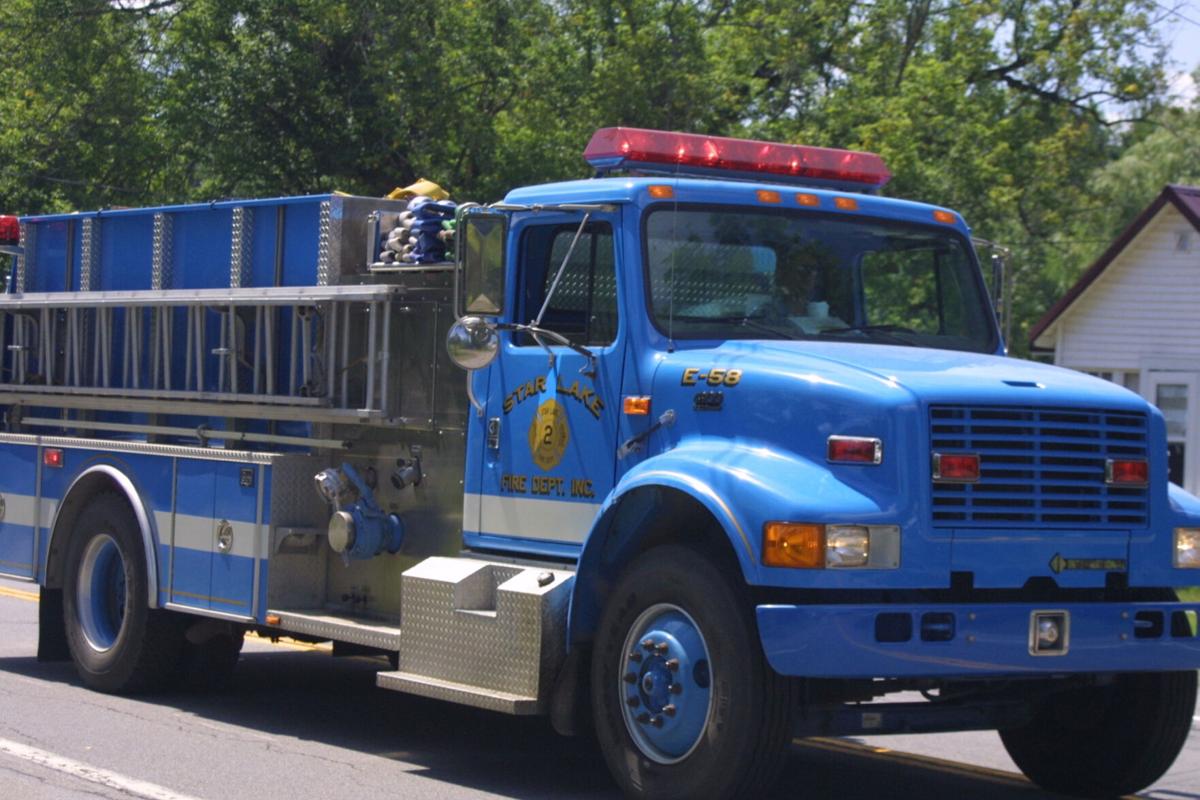 Vehicles from as far away as Star Lake took part in Saturday’s “Back the Blue” parade in Waddington. Bob Beckstead/Watertown Daily Times 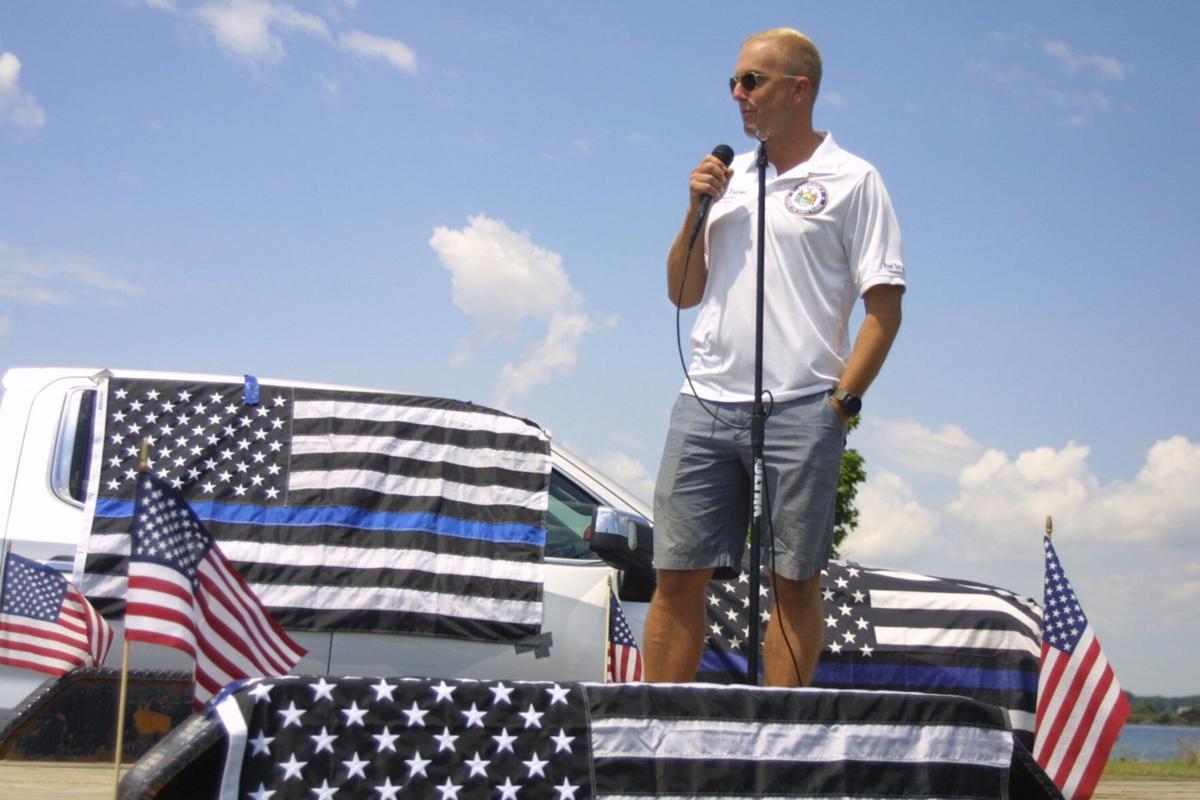 Assemblyman Mark Walczyk was one of the elected officials on hand for Saturday’s “Back the Blue” parade in Waddington. Bob Beckstead/Watertown Daily Times 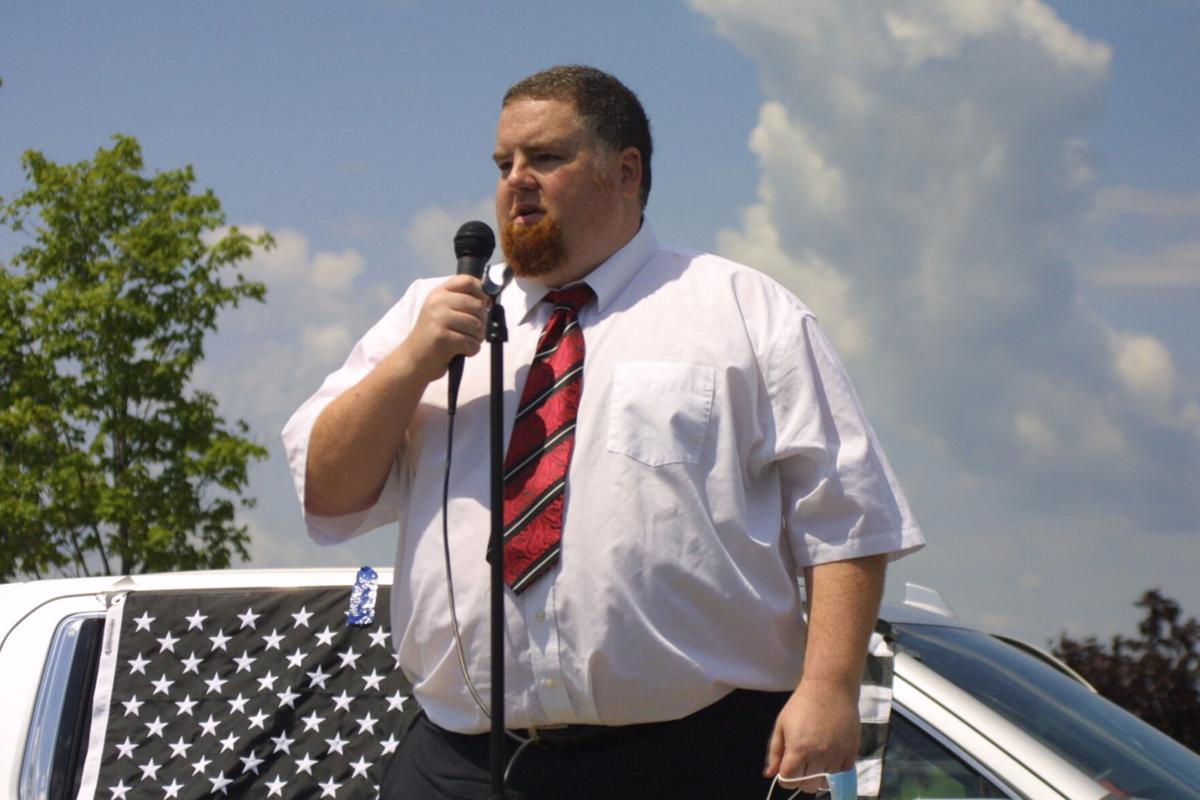 Dr. William Orlando displays his Corvette that has a special message on the front hood: Back the Blue. Dr. Orlando was one of the many participants in Saturday’s “Back the Blue” parade in Waddington. Bob Beckstead/Watertown Daily Times

A walker with a shirt that read “Black Lives Matter” walks along the “Back the Blue” parade route in Waddington last month. Bob Beckstead/Watertown Daily Times

Vehicles from as far away as Star Lake took part in Saturday’s “Back the Blue” parade in Waddington. Bob Beckstead/Watertown Daily Times

Assemblyman Mark Walczyk was one of the elected officials on hand for Saturday’s “Back the Blue” parade in Waddington. Bob Beckstead/Watertown Daily Times

WADDINGTON — The flashing lights and sound of sirens Saturday in Waddington weren’t in response to an emergency.

Law enforcement agencies, first responders, elected officials and others converged on the village for a “Back the Blue” parade.

Police cars, fire trucks, ambulances and other vehicles took part in the parade, which traveled about one mile from Linden Street to JC’s River Run.

More than 30 organizations and individuals from throughout St. Lawrence, Jefferson, Lewis and Franklin counties had been invited to participate in the event that was organized to show support for all law enforcement, fire department and emergency medical service agencies. However, the number of participants was much higher. The parade was announced publicly Friday evening, and others were welcome to join in the convoy, according to Massena chiropractor, Dr. William Orlando, one of the organizers.

“I was asked to help with some organization of this parade. I treated many of the law enforcement officials out here and their friends. So it was easy for me to get to the head of the agencies with a phone call,” he said.

His Corvette was among the vehicles in the parade, and it had a special message on the front hood — “Back the Blue” painted in gray for the Border Patrol, purple for New York State Police and blue for local departments.

“On behalf of the north country, we changed the emblem to three colors of stripes,” Dr. Orlando said.

As vehicles traveled the route, several individuals stood on the sidelines with signs supporting their efforts. They included messages like “Back the Blue” and “Our Police Matter To Us.” No walkers participated in the parade because of COVID-19.

Among those who participated and later spoke to the crowd were three candidates in this year’s election — Rep. Elise M. Stefanik, R-Schuylerville, Assemblyman Mark C. Walczyk, R-Watertown, and Greg Storie, who is running for St. Lawrence County court judge.

“In the north country, law enforcement is part of the fabric and really the strength of our community. When you consider the troopers, the county sheriff’s office, our local police departments, our CBP (Customs and Border Protection) officers, this is a region that supports and embraces our law enforcement. We should be very, very proud of that here in the north country. They do incredible work for this community,” Ms. Stefanik said.

She said hundreds of people turned out in Plattsburgh last weekend “to show their support for their friends, their family, their neighbors that are part of our law enforcement community.”

“I also want to thank the spouses and the children and the parents of our law enforcement officers. As I talked to parents of state troopers, I had a conversation with a gentleman who said he worries about going to sleep every night because he fears for his child’s life. They put their lives on the line, at risk every single day and we owe them a debt of gratitude,” she said.

Ms. Stefanik said she had the support of law enforcement in this year’s campaign.

“I am the only candidate in this race who stands up for our law enforcement. I have an opponent who supports defunding the police. We don’t need to defund the police, we need to defend the police. This is about standing up for our values... which is why I am so excited to announce that I have been endorsed by the Police Conference of New York state. I am the first member of the New York Congressional delegation to earn that endorsement. I have also been endorsed by our Border Patrol,” she said.

Mr. Walczyk said he was proud to support law enforcement in Albany.

“I’m proud that I’ve been able to thread the needle in Albany to stand up and support our police officers, men and women. Frankly, I’m preaching to the choir. This crowd knows that,” he said.

“I think it’s important to state anyway, every single day when they get up and they do their job, they need to be on their A game. Every single day that they put on their uniform, there is a really good chance they’re going to meet somebody on the worst day of their life. They’re definitely going to meet somebody that’s had the worst day that week, certainly that year plenty of times,” Mr. Walczyk said.

He said he talked with some officers before the parade and heard about issues they’ve faced.

“Just domestic disputes alone would make me never want to do their jobs. A huge thank you to the men and women who put on the uniform, put themselves in dangerous situations and, frankly, people who are criticizing them the most would have no courage to do so whatsoever,” he said.

“Another word that comes to mind personally is family. I have a cousin. He’s a retired state trooper. During a routine traffic stop, a man tried to stab him in the chest. Middle of the day, routine traffic stop, he was not expecting this. So I understand that when law enforcement officers go to work every day, they don’t know what’s going to happen. They don’t know if they’re coming home,” he said.

“Our law enforcement officers, whether it’s an accident, a violent crime, even sometimes a fire, they’re going to help. So there’s a great personal cost to themselves,” Mr. Storie said.

Wonderful day of patriotism today. Your vote is very clear.

Ogdensburg is a meth-smoking welfare town. Nobody is surprised a loser town backs Trump.

Many people have asked about the “Back the Blue” parade on Saturday, and many have opinions on the parade. This is not a partisan forum, so here are the facts:

1. I learned of the existence of the parade on Friday afternoon when someone sent me a screenshot of a text they had received seeking participants.

2. The Village was not consulted regarding the parade details or speakers.

3. On Friday afternoon, SLC Undersheriff O’Brien sent me a copy of an email sent by the parade organizers from Dr. Bill Orlando dated Thursday July 16.

4. The organizers contacted a member of the Waddington Fire Department prior to Friday requesting traffic control.

5. I was assured by organizers that everyone would remain in cars.

6. Members of Elise Stefanik’s campaign team set up a distribution table at the Civic Center without a permit to use the facility. When asked to leave or relocate, they refused.

7.Someone drove a truck and trailer into Whitaker Park, and members of Stefanik's team set up for speakers. They did not have a permit for use of the park. They also refused to leave or relocate when asked by me and a NYPA official.

8. I asked Undersheriff O’Brien, who was in attendance at the parade, to ensure that the Governor’s Executive order regarding gatherings and proper social distancing was adhered to at the speaking engagement.

It is my sincere hope that none of the participants or our community members are diagnosed with COVID 19 as a result of the influx of new people to the village from all over the region including Jefferson County and Plattsburgh. I will ask the SLC Department of Health to inform Village residents if any contact tracing stems from Saturday's events.

At "Back the Blue" Stefanik folks took control, infringed on local authority and laws, defied law enforcement orders, and boldly proceeded with their re-election campaign agenda. Nothing like putting the middle finger up to the Blue.

Thank you for your responsible reporting, Mayor Zagrobelny.

You liberals are insane and shows how pathetic you all are. This was to bring pride back to our communities and show support for law enforcement. Liberal democrats want to change america people. This election has never been more important. Trump 2020 to save our country.

DJT, are you disputing the details reported by Waddington's mayor?

A middle finger to the blue is what you leftist anarchists are doing in Portland, NYC, etc. Wake up and right your ship while you can.

One question Mayor: Would you vociferously also oppose a BLM protest that didnt go through the process to your satisfaction or would you exempt gatherings that are progressive from criticism like America's joke mayor deBlasio? I want to know if you are consistent.

I just looked this mayor up. Google him. Beware "facts" from a super partisan!

BLM would be welcomed with open arms as would antifi . This is the democrats make no mistake. VOTE

Democrats are Antifi and BLM members. We are for law and order. We know where you stand. You hate America because of Trump!! Go Ogdensburg Police.