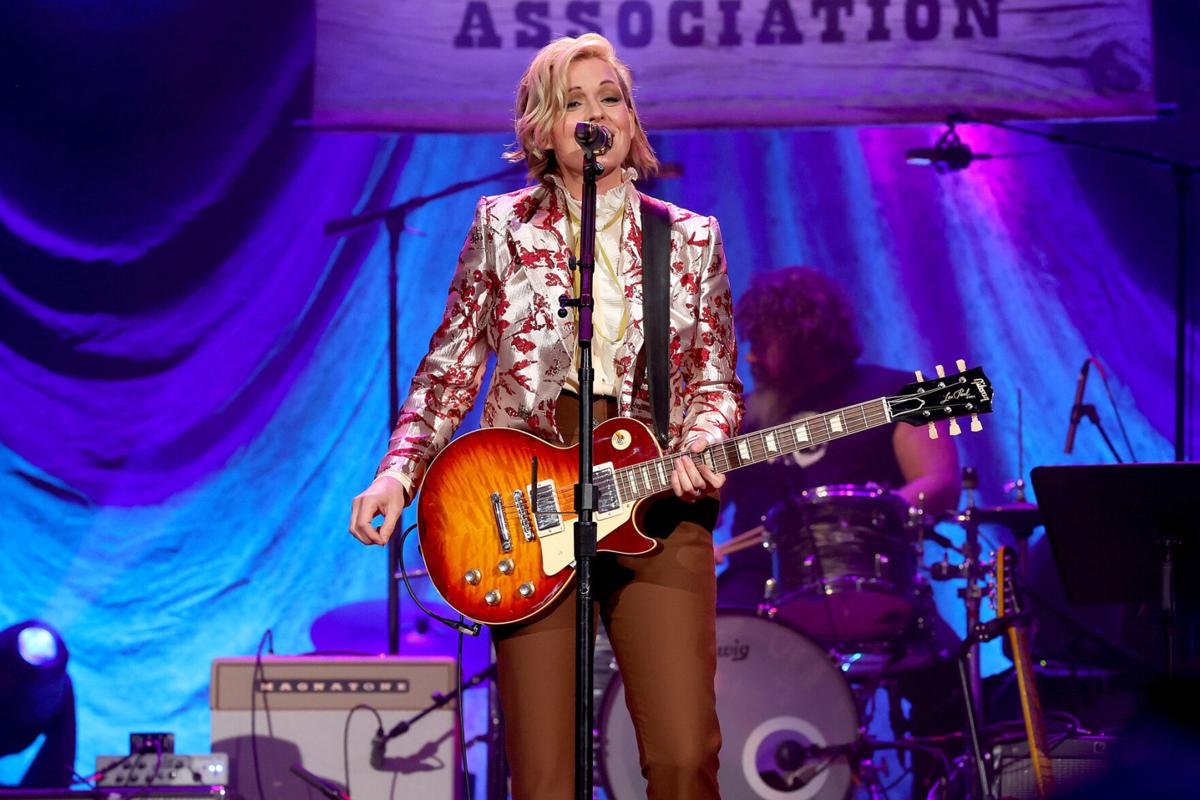 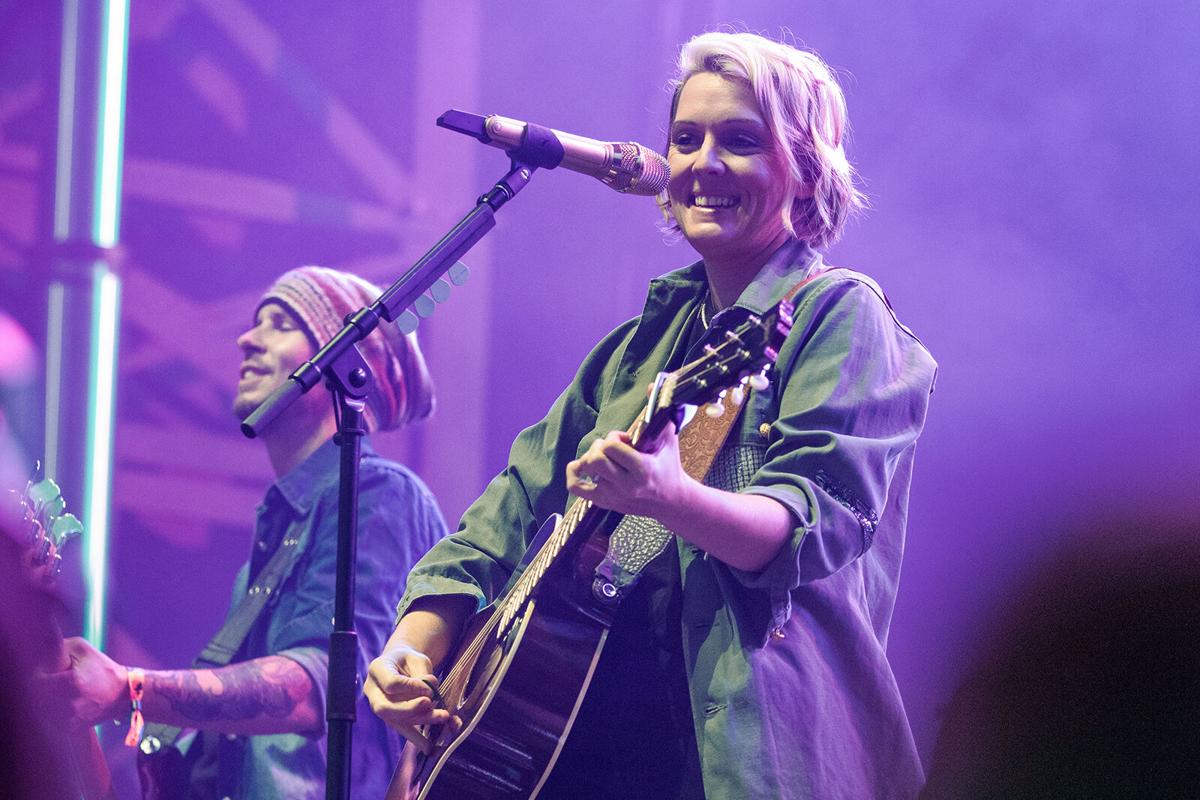 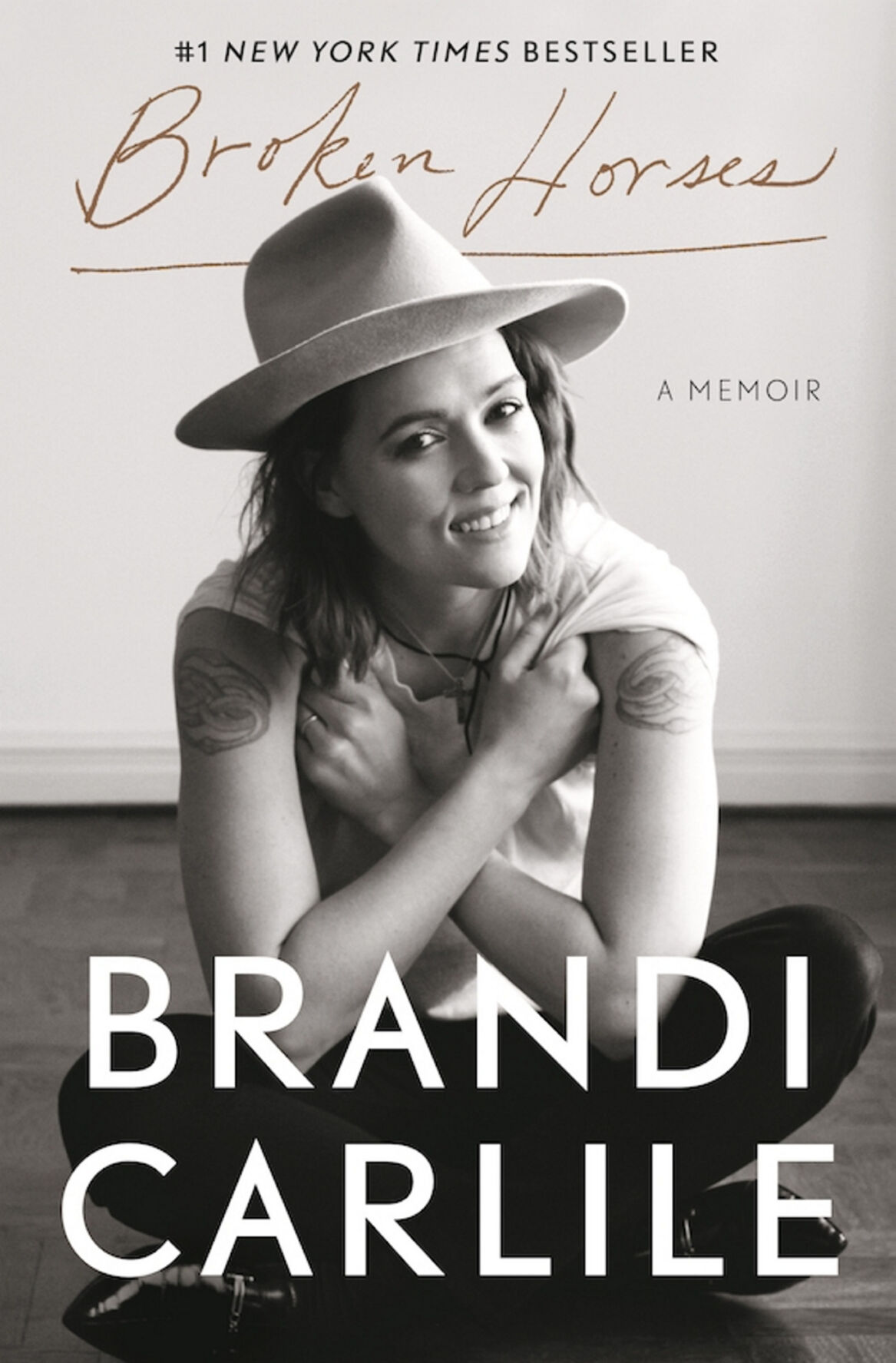 Carlile’s memoir, “Broken Horses,” was published earlier this year and is a best seller. Crown 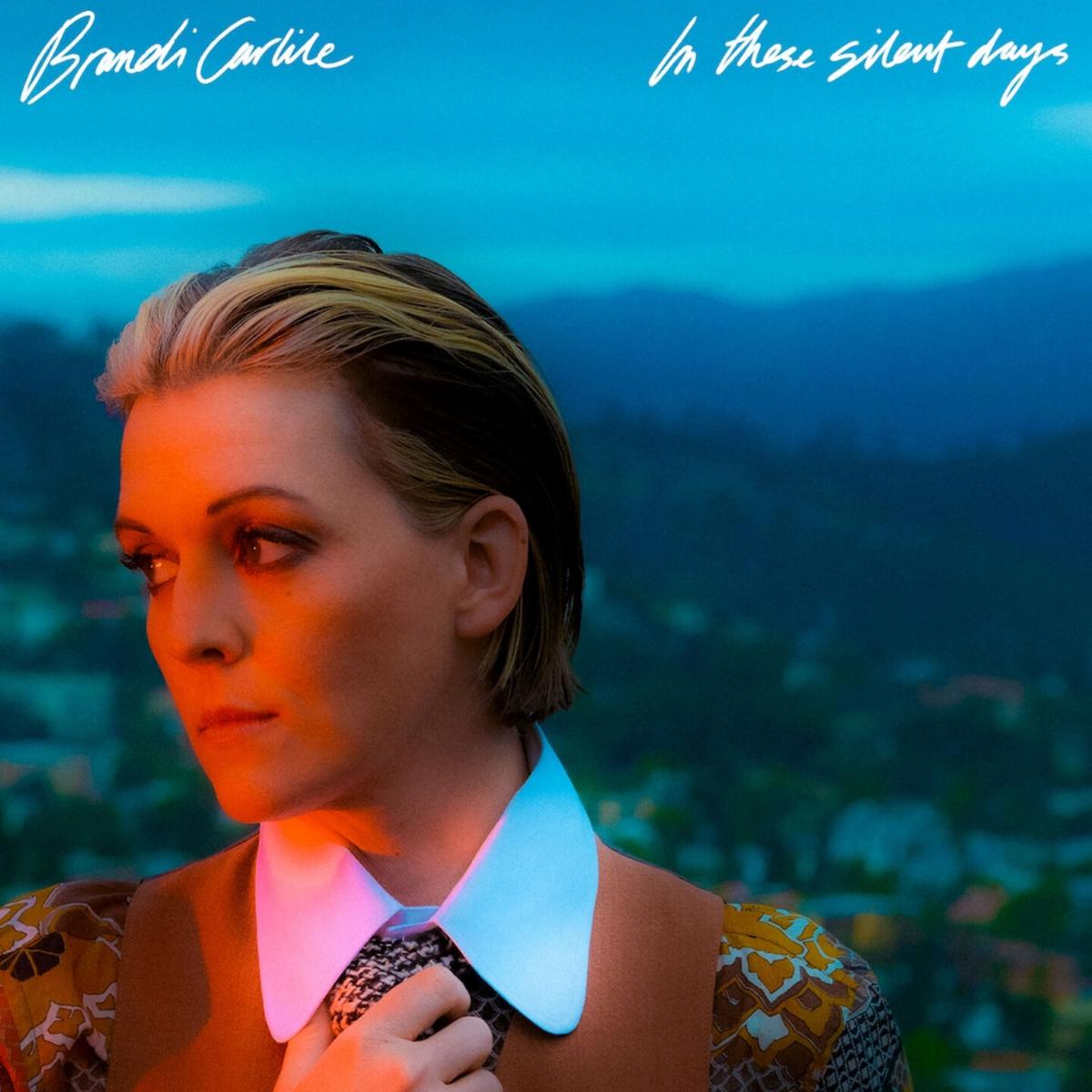 Carlile’s seventh album is “In These Silent Days.” New Elektra 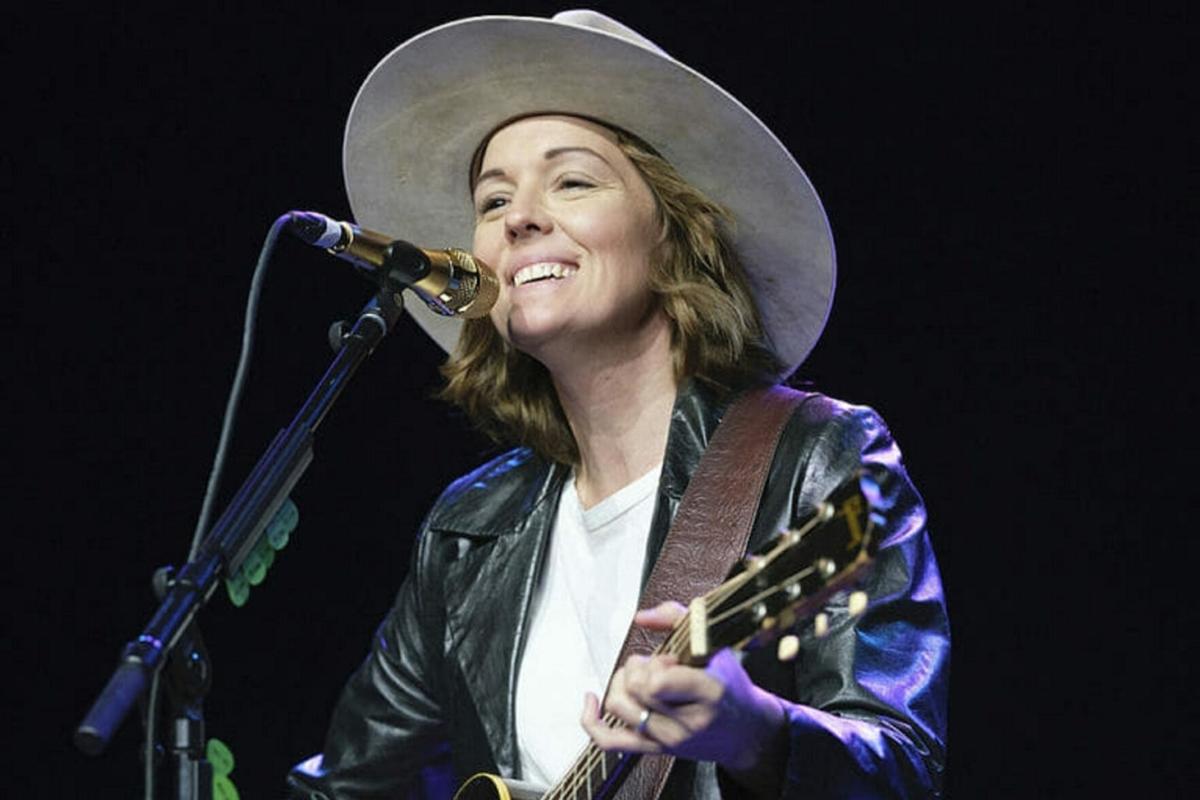 Carlile’s memoir, “Broken Horses,” was published earlier this year and is a best seller. Crown

Carlile’s seventh album is “In These Silent Days.” New Elektra

LOS ANGELES — Brandi Carlile’s wife calls it “making a rod for your own back.”

That’s when the acclaimed folk-rock singer writes a song with a big, showy vocal turn built into it — an everybody-look-at-me moment when her accompaniment drops away and she lets her voice rip in all its husky, quavering, scratchy-edged glory.

“She’s like, ‘You know you just created a problem for yourself,’” Carlile says, translating for the British-born Catherine Shepherd, whom she married in 2012 and with whom she shares two daughters ages 7 and 3. “And of course she’s right. It’s not a great habit to get into.”

To be clear, Carlile, 40, loves these moments in her music; she’s all about the theatrics and the “athleticism,” as she puts it, of a tune like “The Story,” her breakout single from 2007 that gathers to a shattering grunge-soul climax. But she realizes that such a display establishes an expectation among audiences that she’ll be able to do it live — to deliver the type of fireworks she grew up expecting from Celine Dion and Whitney Houston, whose florid vocal run from an awards-show rendition of “I Have Nothing” she can still quote note for note.

“It’s my Achilles’ heel,” she says of her voice. “If anything’s wrong with it, I feel so emotionally unstable. And I’m well aware of the fact that I’m getting older.” She laughs. “But I just keep creating these problems.”

Indeed she does. In 2019, Carlile brought her song “The Joke” to the Grammys for a show-stopping performance that seemed to transform her instantly — after nearly two decades of practice — into a star. (She remembers Post Malone high-fiving her backstage.) Soon she was palling around with the likes of Elton John and Joni Mitchell, whose album “Blue” she covered in its entirety at Walt Disney Concert Hall; she formed a country supergroup, the Highwomen, and wrote a bestselling memoir, “Broken Horses,” tracing her sometimes-painful journey as a churchgoing gay kid out of the wilds of rural Washington state.

Now she’s back with a new album, “In These Silent Days,” that opens with yet another stunner: a sweeping piano ballad called “Right on Time,” in which she reaches for a high note, seizes it, then climbs up a few more steps just to ensure she’s tingled every spine in the room. Other cuts ponder marriage, loyalty and religious hypocrisy — the blistering “Sinners, Saints and Fools” was “completely influenced by Black Sabbath,” she says — and offer hard-won parental guidance to her children, as in the harmony-drenched “Stay Gentle.”

“I’m so drawn to the drama within domesticity and motherhood — the juxtaposition of being so free and so confined at the same time,” she says. Carlile recorded the LP, her seventh, with Dave Cobb and Shooter Jennings, the same team that produced 2018’s “By the Way, I Forgive You,” which earned six Grammy nominations (including album, record and song of the year) and won three.

Heartfelt and intimate even when Carlile is aiming her songs toward the rafters, “In These Silent Days” is sure to please the longtime fans who’ve followed the singer since she and her stalwart bandmates, twin brothers Tim and Phil Hanseroth, began working the Seattle club scene in the early 2000s.

Yet it’s also the first album Carlile has made since she attained the mainstream celebrity she regards with a kind of moral weight. “I see what’s happened to me in my career and in my life as an opportunity for other queer people,” she says over breakfast in West Hollywood. Dressed in jeans and a black T-shirt, she’d rolled downstairs to the restaurant at the Sunset Marquis after a late night at Eddie Vedder’s Ohana Festival in Dana Point, where she’d performed her own set then dropped in to do “Better Man” with Pearl Jam.

“It’s important to me to make sure that the door stays open for other people like me to get through it.”

Carlile, who says she began writing the album immediately after finishing her book — “I literally got up from the desk and walked to the piano” — is still getting accustomed to the reality of stardom. The other day she was driving from her home outside Seattle to Mount Vernon, Wash., where she keeps her boat, when “somebody drove by me frantically waving.” At first she thought she had a flat tire. “Then somebody else did it, and it dawned on me: Oh, they recognize me.”

Part of what makes that feel strange is that, thanks to the COVID-19 pandemic, Carlile spent much of the past year and a half sequestered at the sprawling forest compound where she, her wife and their kids live along with Tim and Phil (who’s married to Carlile’s younger sister) and several other “chosen family” members, as she describes them. “For a long time, I wasn’t on,” she says.

Also: 40 is an unusual age to become a pop star. Carlile says she’s talked about this with Bonnie Raitt, who underwent something similar when her 1989 album “Nick of Time” won an armful of Grammys after she’d been toiling for years. “The kind of acknowledgment she was finally getting was the kind she wanted, and that’s how I feel too,” Carlile says. “When I was 22, 23, a moment like the Grammys would’ve come at me and I wouldn’t have known what to do. I would’ve played to tracks and maybe fake-played guitar,” she says, instead of putting on the raw real-time performance that turned so many heads.

To be celebrated for the thing she’s always done — “I don’t want to say it makes me feel vindicated,” Carlile says. “But it makes me feel at peace with some of the rejection I’ve experienced throughout my life, early on, coming out of the closet as a teenager.”

Those around her say fame hasn’t changed Carlile. “Still nothing makes her happier than turning on the grill,” says Tim Hanseroth. Courteney Cox, the actor and former “Friends” star who directed the music video for “Right on Time,” was a fan of Carlile’s music before they struck up a friendship and says the “honesty and authenticity” in her songs is true to life.

“The person I was drawn to is the exact same person that I know now,” Cox says.

What’s interesting about Carlile, who will perform Mitchell’s “Blue” again at New York’s Carnegie Hall on Nov. 6, is how she squares that humility with her natural entertainer’s flair. According to Tim, Carlile has a “light switch” that she flips onstage to access her inner vocal diva. “It’s almost like Dr. Jekyll and Mrs. Hyde,” he says. “Even when we were playing these tiny little clubs, she was always huge in her mind.”

Carlile agrees. “When I was 14,” she says, “I was like, ‘There’s no way this won’t happen if I just keep going.’” And now that it has, she’s determined to maintain her position. For a while after the Grammys, Carlile seemed to turn up at every record-industry charity gala or on every music-related TV special you could imagine — singing songs, sure, but shaking hands too.

She wants to understand “being inside the mechanism, seeing how the machine works,” she says. “If I’ve been given a platform, the least I can do is operate functionally within that machine.” It’s an attitude that contrasts with the more hands-off approach taken by peers like Vedder and Sturgill Simpson, who interact with the machine as little as possible.

Carlile says that she and Simpson, who’ve performed together, have “a crazy amount of respect” for each other. “But this is the place where we diverge, and it’s because I’m not coming from a place of the privilege of being (accepted) by the biz.” When Simpson, like Vedder, a straight White man, “does that anti-establishment bit, I’m like, ‘Congratulations — the establishment embraces you whether you embrace them or not.’

“When I have those tendencies, I have to ignore them. I don’t get to indulge them. If I take my hands off the wheel for one f— minute, this thing all goes away. If they take their hands off the wheel, they’re on the cover of Rolling Stone.”

For Carlile, the point of her success — beyond the clear enjoyment she takes in standing before a cheering crowd as she nails some flamboyant vocal maneuver — is expanding the idea of what type of person can expect to win. There’s a purity to her ambition that’s only deepened as her horizons have broadened.

“I am pure,” she says, smiling. “And conniving. And agenda-ridden. And totally innocent.”