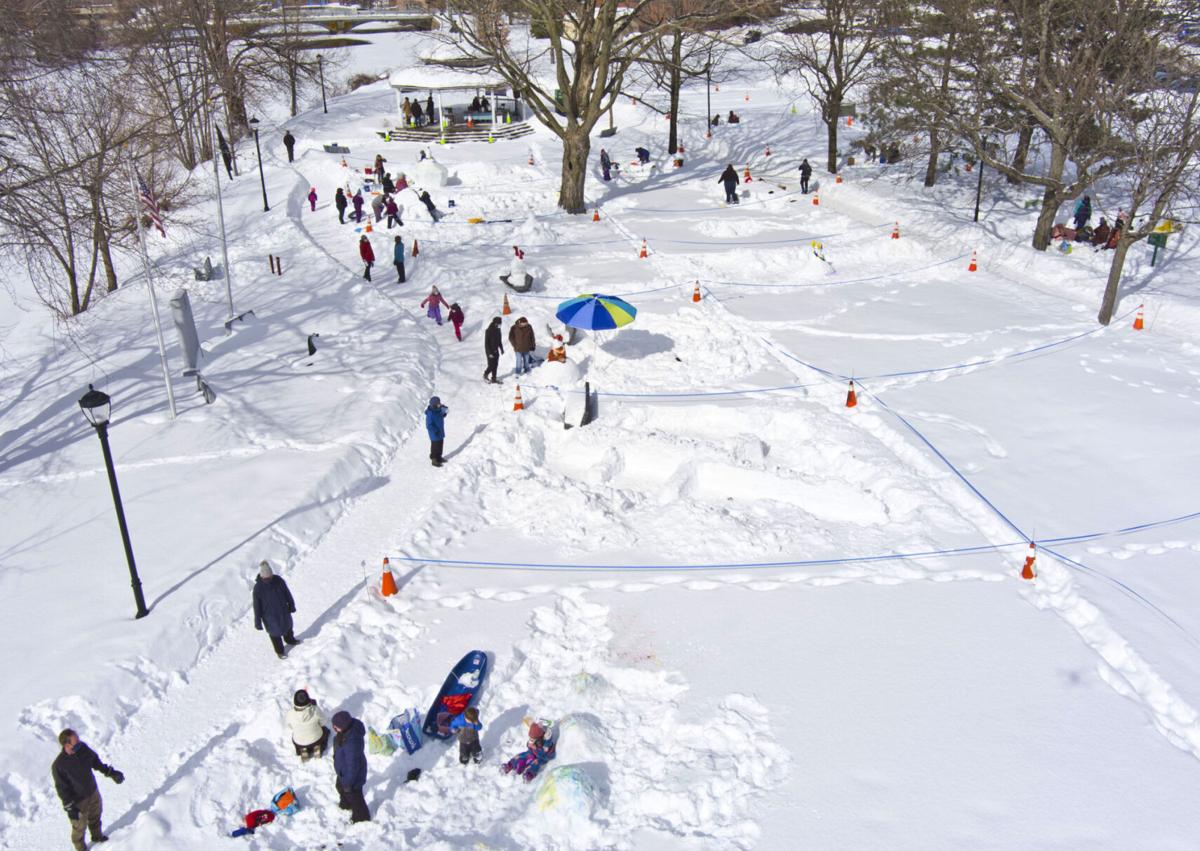 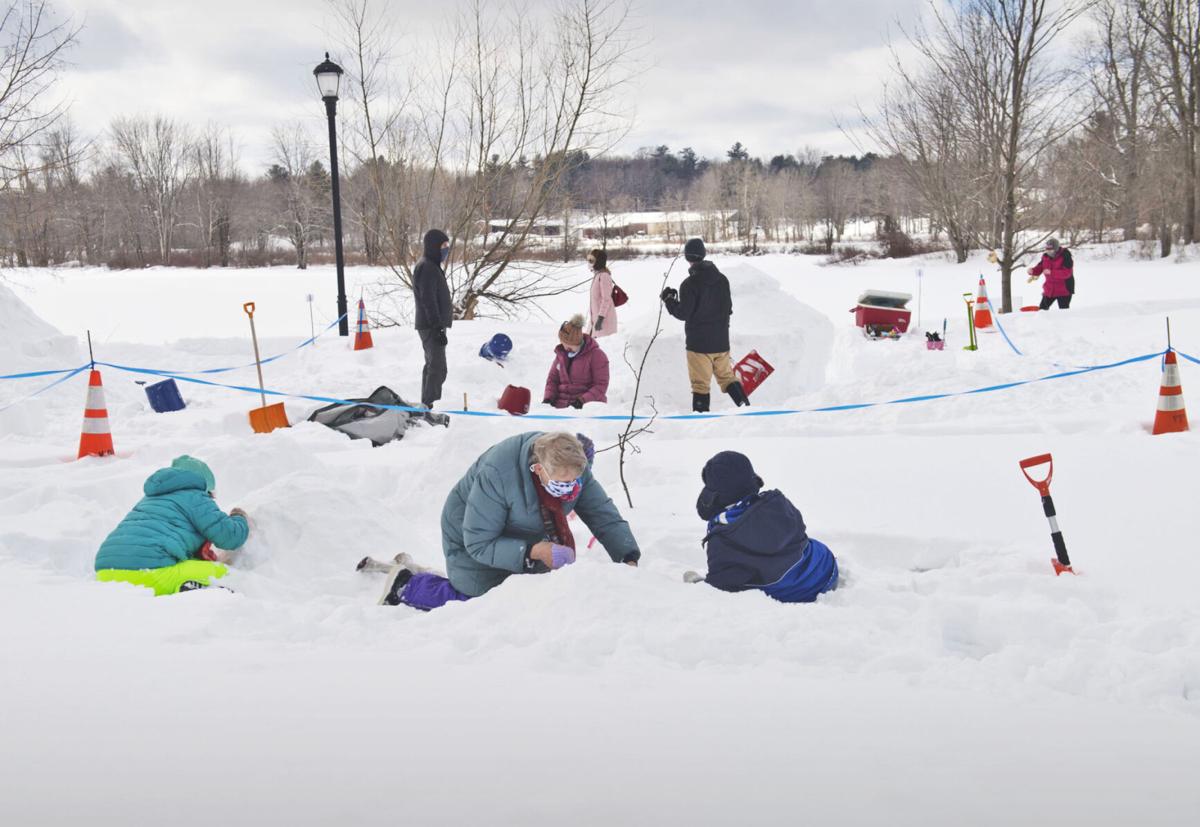 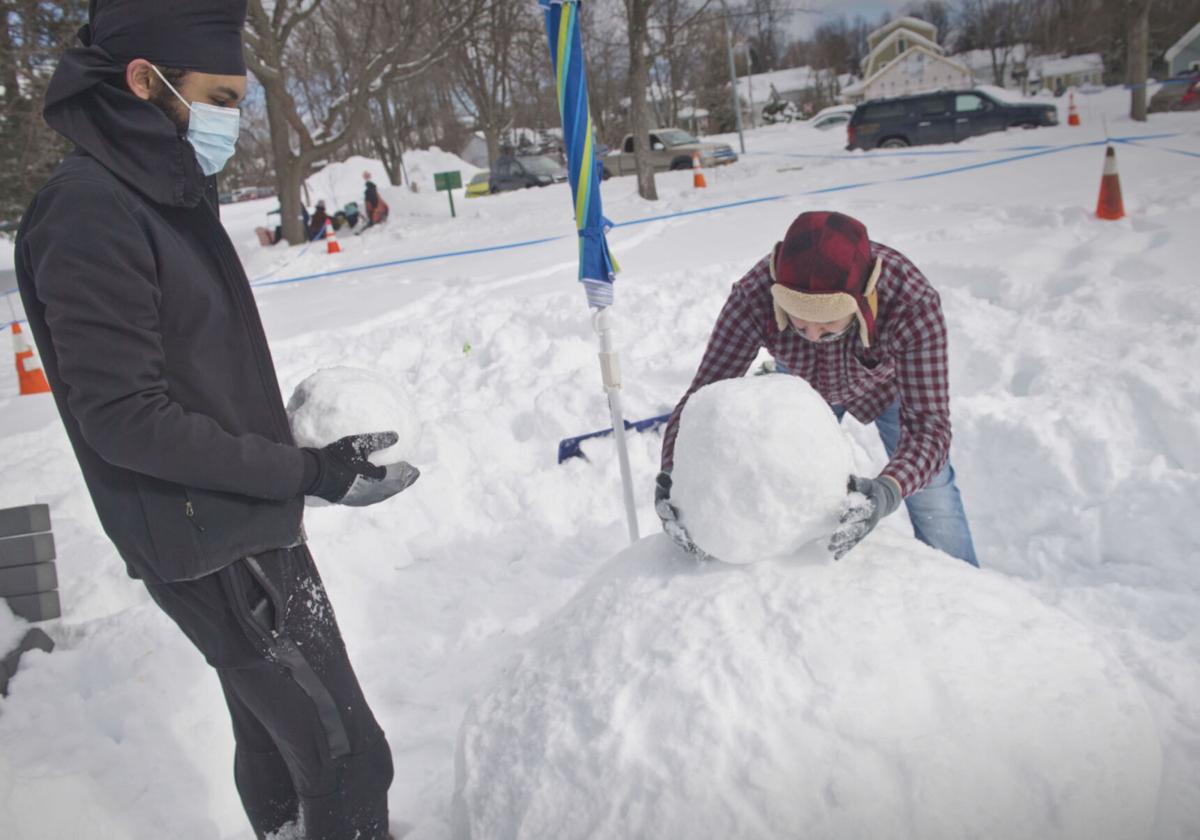 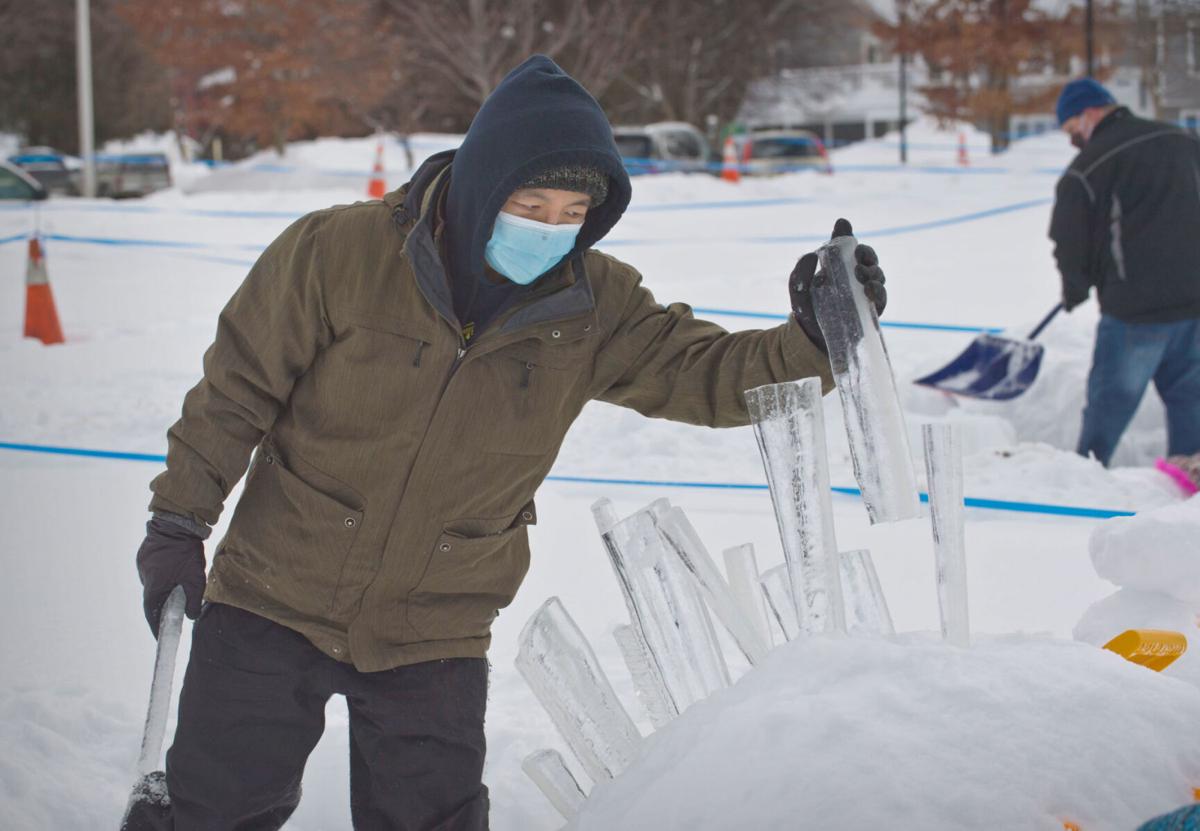 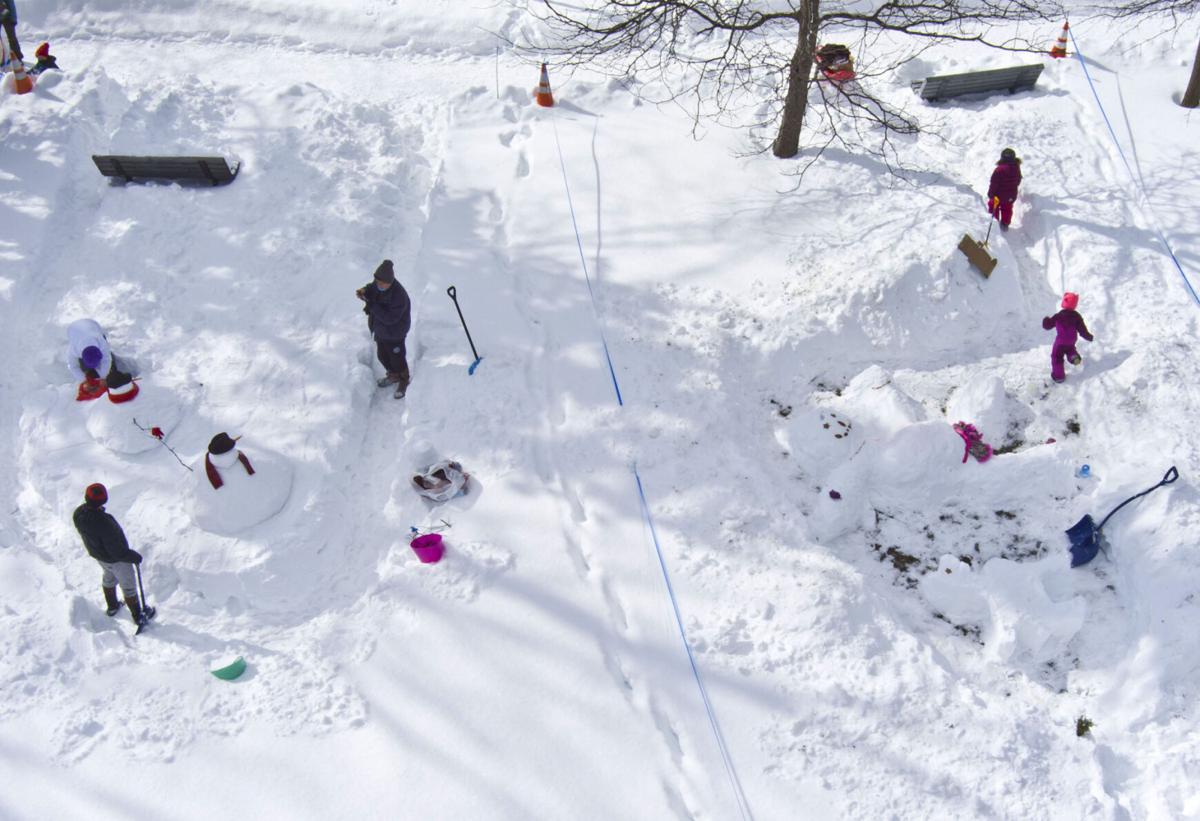 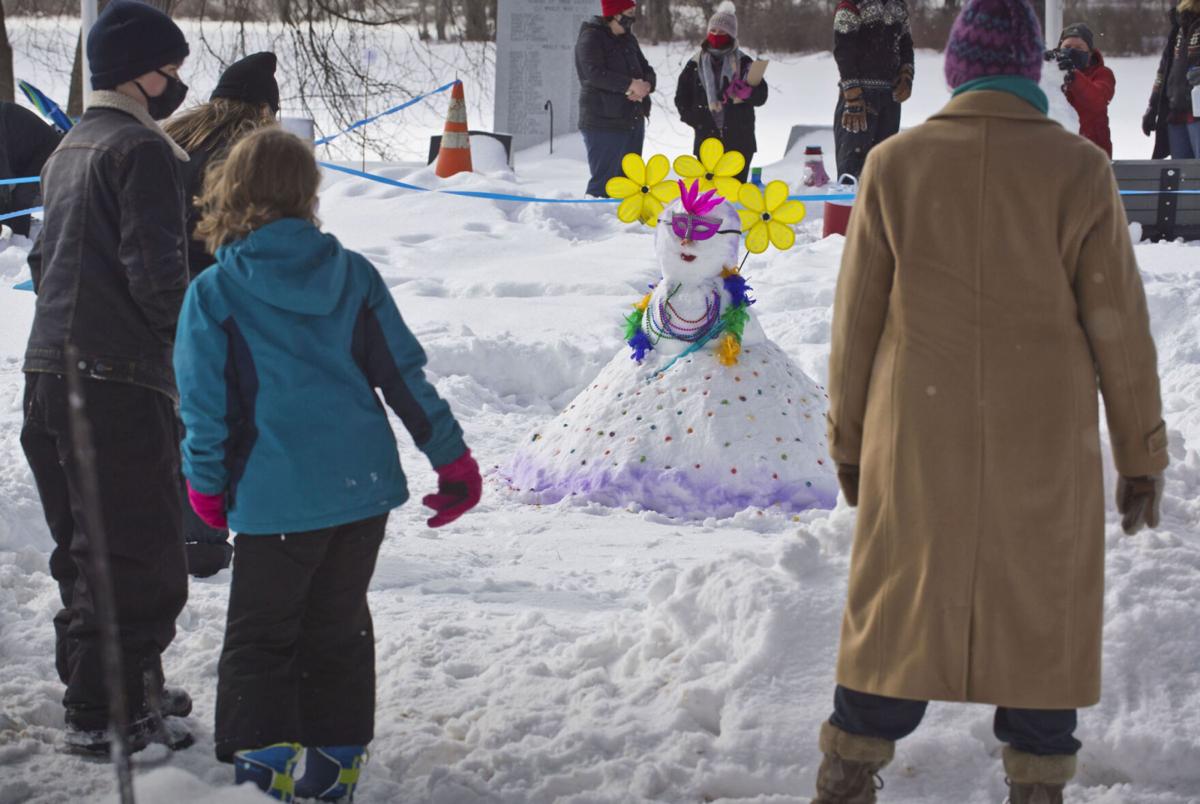 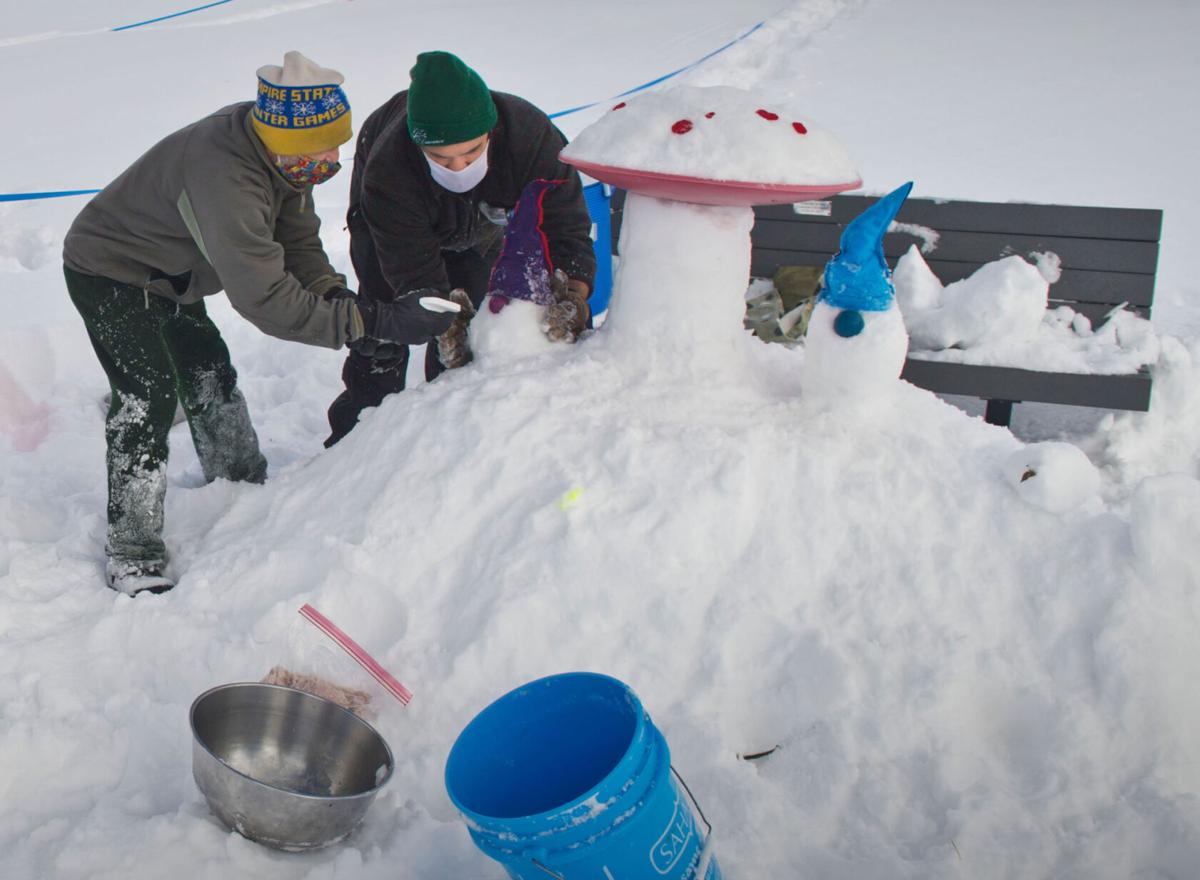 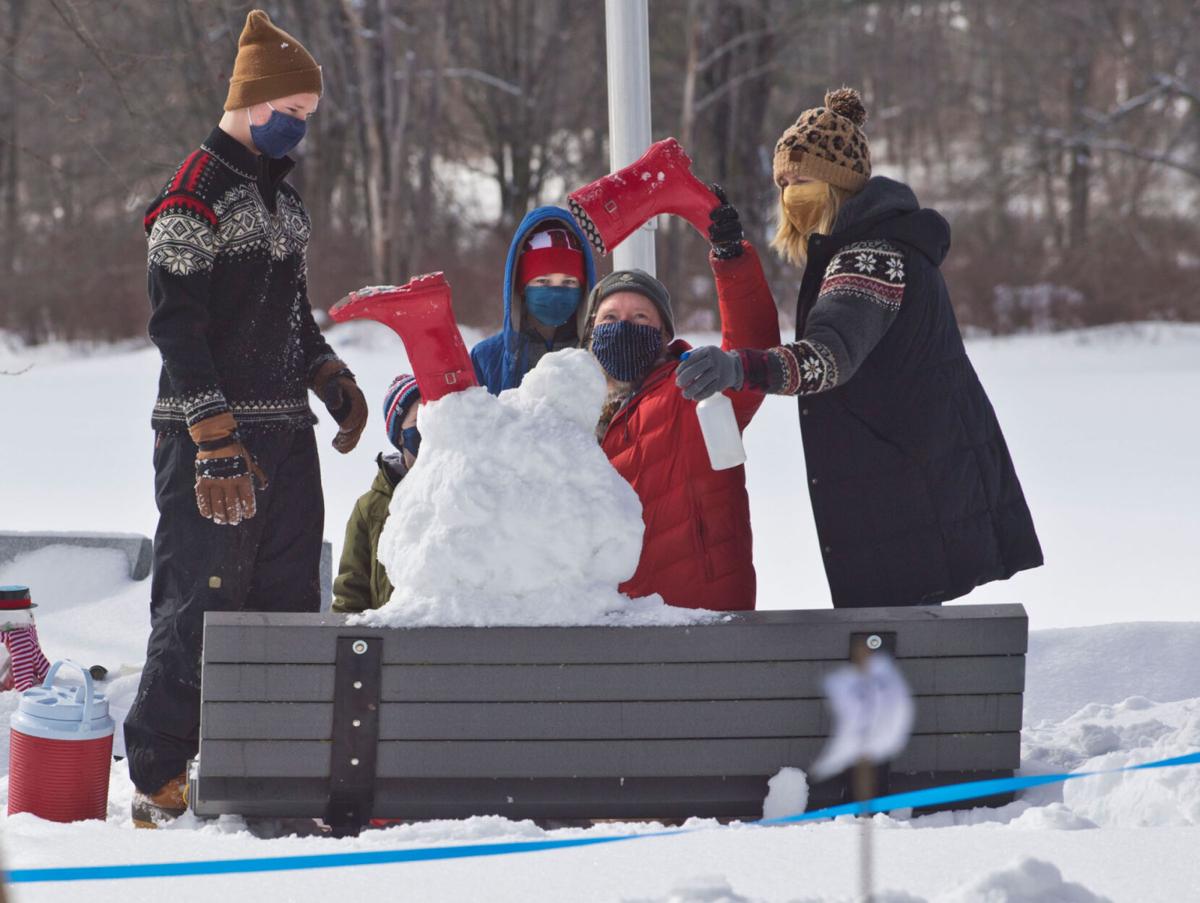 A team carefully adds a boot to its inverted snowman Saturday at the Potsdam Snowman Festival in Ives Park. Christopher Lenney/Watertown Daily Times 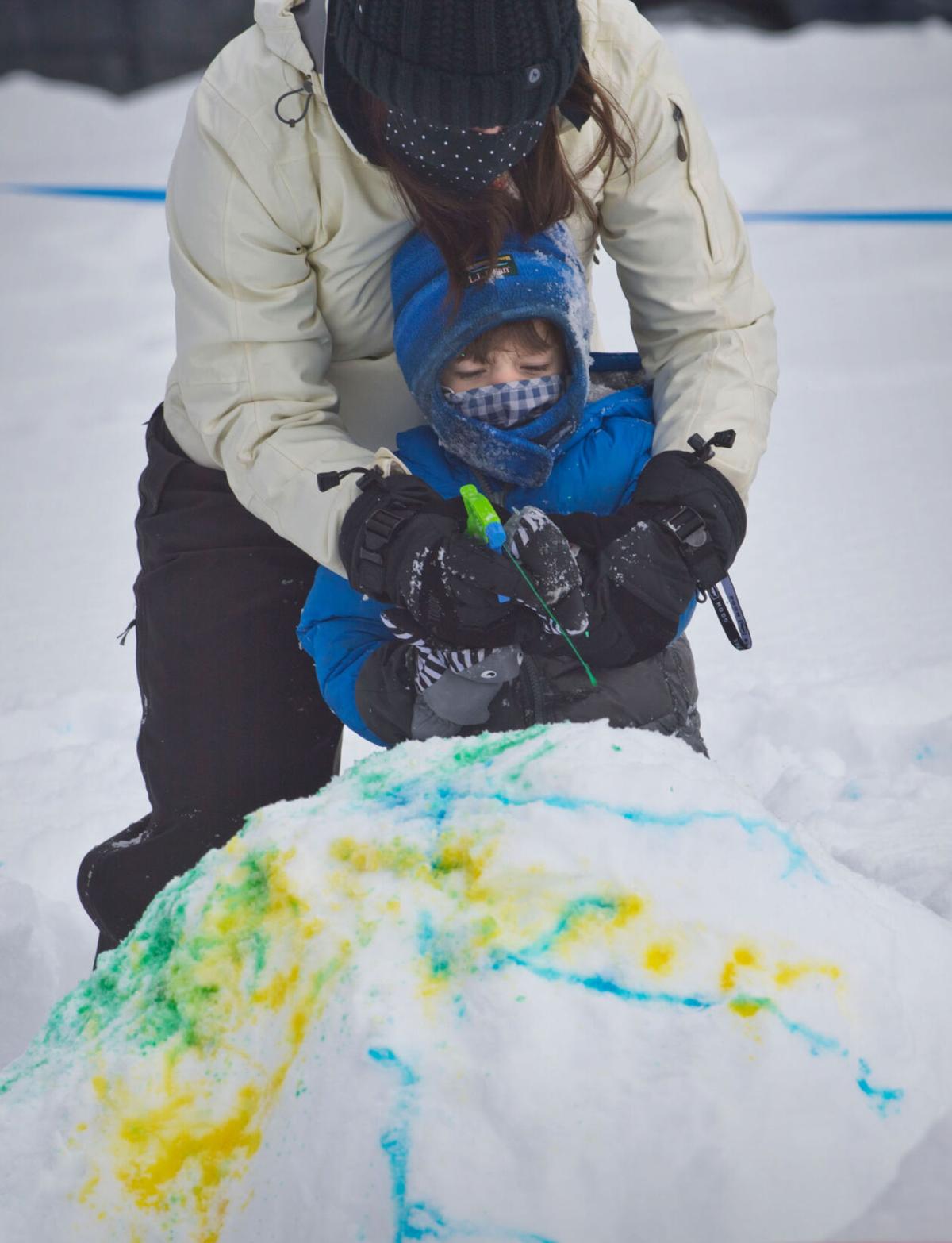 A young artist has help applying color to a sculpture Saturday at the Potsdam Snowman Festival in Ives Park. Christopher Lenney/Watertown Daily Times

A team carefully adds a boot to its inverted snowman Saturday at the Potsdam Snowman Festival in Ives Park. Christopher Lenney/Watertown Daily Times

A young artist has help applying color to a sculpture Saturday at the Potsdam Snowman Festival in Ives Park. Christopher Lenney/Watertown Daily Times

POTSDAM — A rhinoceros, a scaled dragon and a trail of ducklings visited Ives Park on Saturday afternoon.

Potsdam’s inaugural Snowman Festival brought about 50 people to the frozen shore of the Raquette River, where snow whimsy emerged from north country kids, parents, college students and teachers — all artists for the day.

Organized by the North Country Children’s Museum, the St. Lawrence County Arts Council, Big Spoon Kitchen, SUNY Potsdam and the village Chamber of Commerce, the festival and competition was staged near the Ives Park gazebo, with building stations cordoned off to keep teams distanced.

The weekend’s snow was not ideal for packing, but teams made the most of icy flakes, using kitchen utensils, warm water, molds, dye and accessories to breathe life into the heavy white blanket covering the park.

Honors for most artistic, most unique, most comedic and most north country were also announced, with the Maggie and Matt McKenna family recognized as Most North Country for their multicolored replica of the Ives Park gazebo surrounded by sculpted musicians playing a traditional park concert.

Team rosters were restricted to those living in the same household, and masks were required. With blushed cheeks and snowy eyelashes, kids trudged through snow at depths half their height, breaking for hot chocolate and cookies at their stations.

Jeanna Matthews, a Clarkson University computer science professor, spent the day crafting a mother duck and ducklings with her daughter Abigail, a 2019 Clarkson graduate. The pair traveled from their Massena home, where similar molded ducklings line the porch.

Xiaoli Wang, an analyst for Clarkson’s information technology department, said her vision was a father and son celebrating the Lunar New Year. The snow duo held branches as hands and were clad in red for good fortune.

Cynthia Mondesir, a pediatrician for St. Lawrence Health System in Potsdam, formed a dancing snow girl with her husband Justin Doyle and 5-year-old daughter Katherine Doyle. The dancing snow girl was complete with a tutu and recital flowers and stood next to her dog Biscuit, modeled after the family’s own puppy.

The dancing snow girl received an honorable mention, along with a bearded dragon, a family of gnomes housed beneath a mushroom and a classically styled snowman named Pop Pop.

Ms. Mondesir, who moved with her family to the north country from Alberta, Canada, last June, said the community gathering sparked needed mid-winter joy. Next month, the COVID-19 health crisis will enter its second year in New York.

“These opportunities help teach my daughter that we’re still OK,” she said. “That even in a pandemic, we can be OK.”