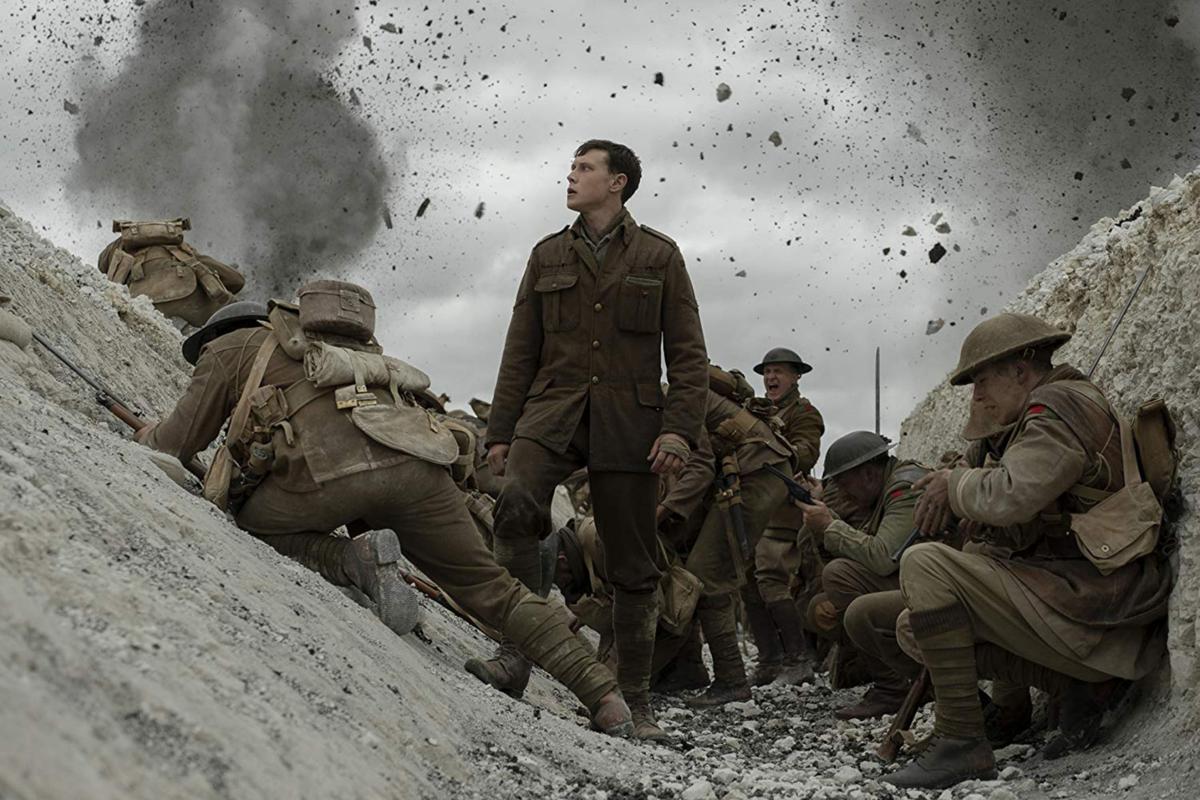 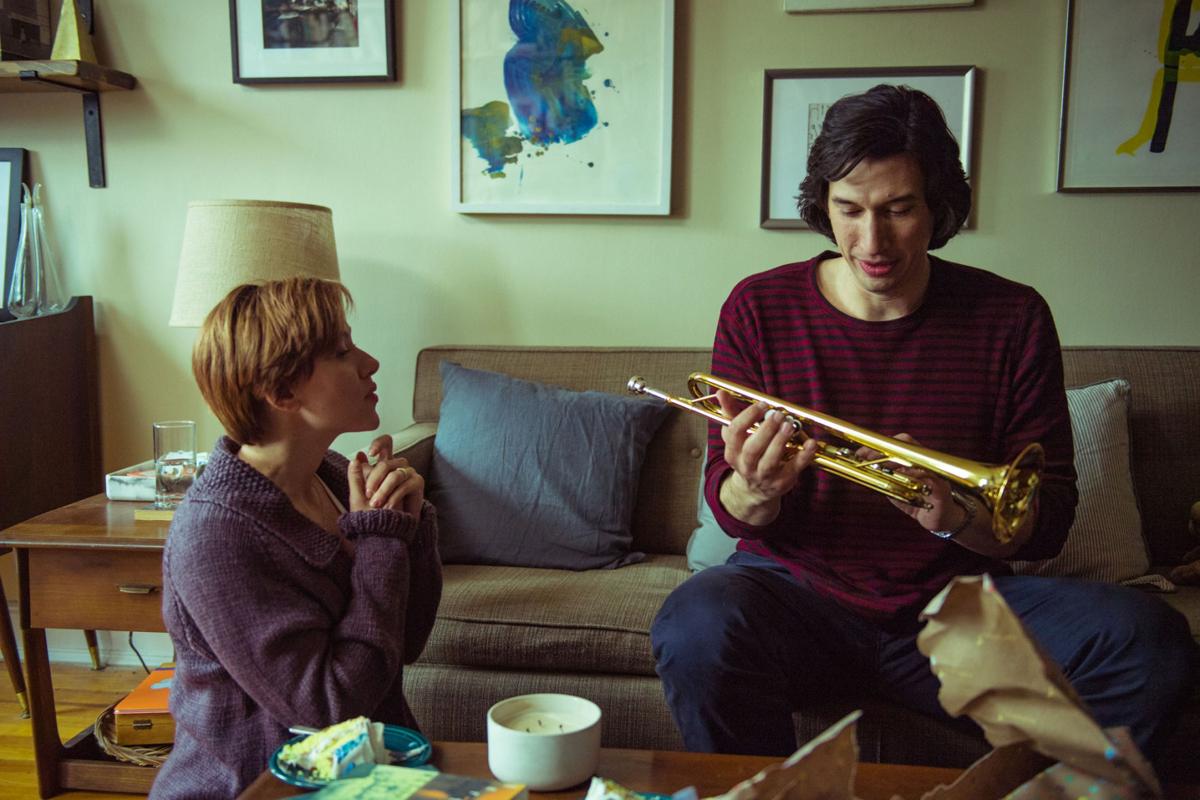 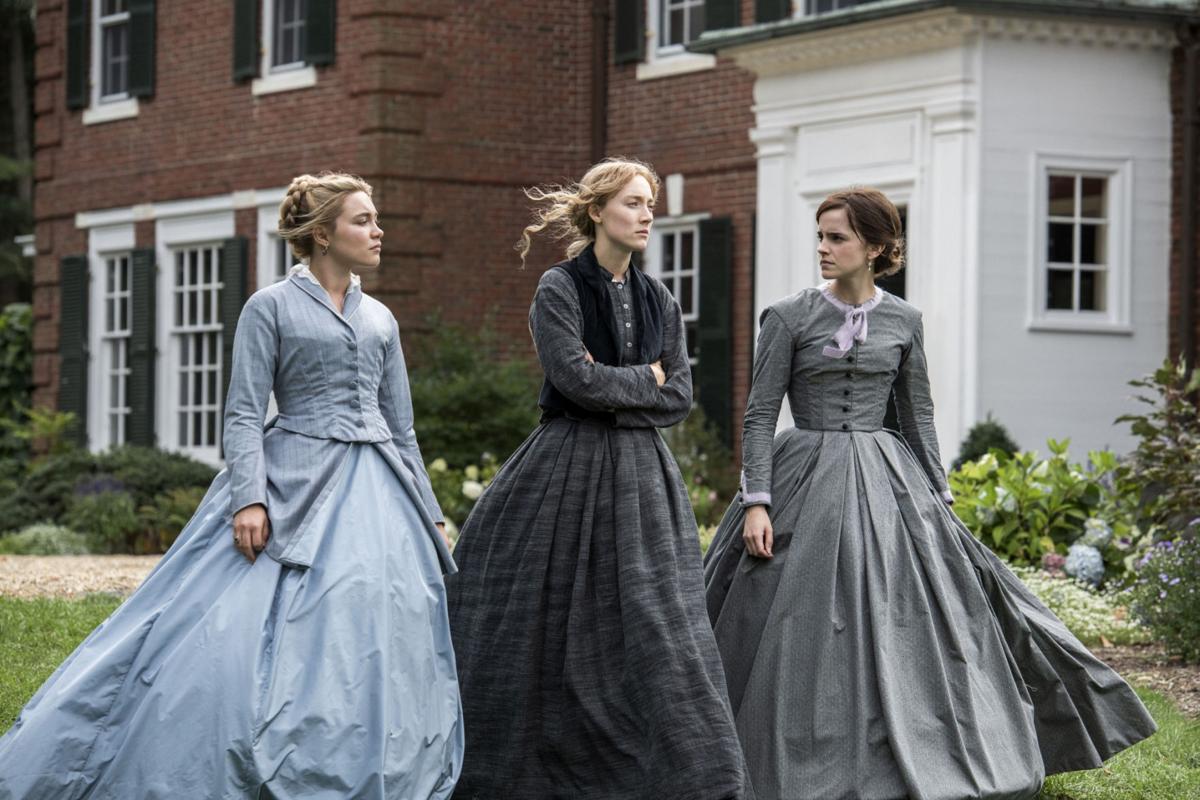 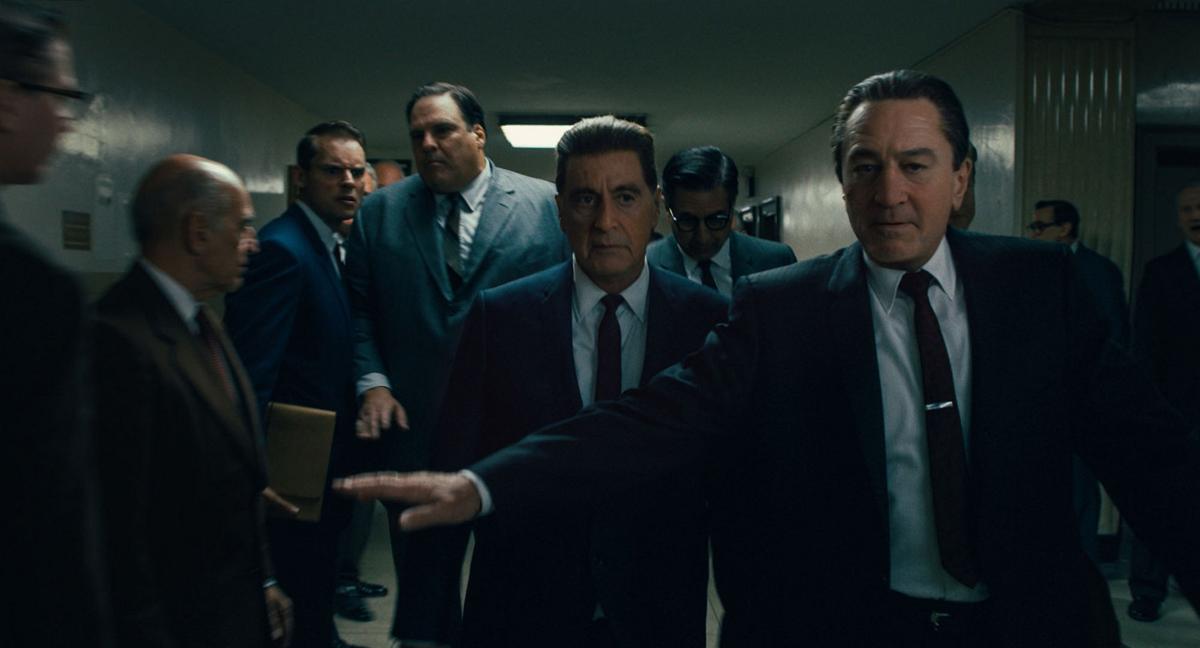 Frank Sheeran (Robert De Niro) is both defender and confidante to Jimmy Hoffa (Al Pacino) in "The Irishman." (Netflix/TNS) 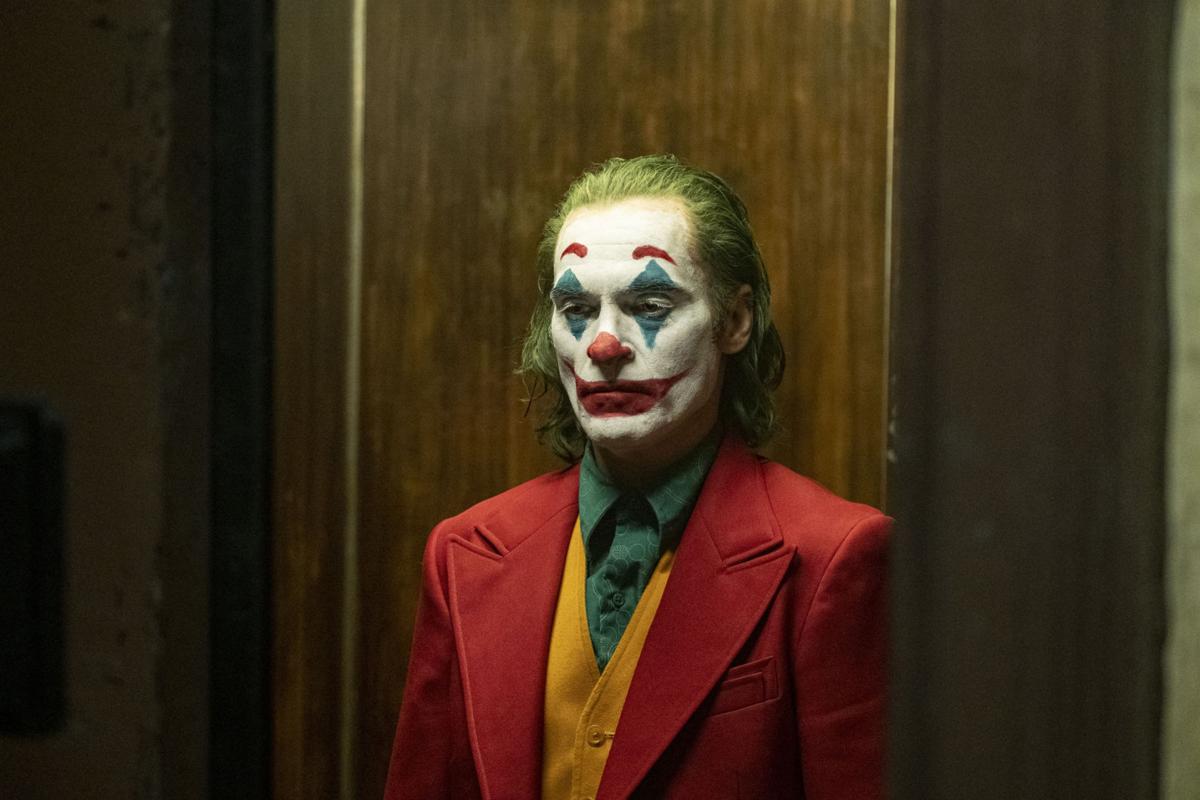 Frank Sheeran (Robert De Niro) is both defender and confidante to Jimmy Hoffa (Al Pacino) in "The Irishman." (Netflix/TNS)

No, it wasn’t just your imagination. This actually was the shortest Oscar season ever. The nominations were revealed on Jan. 13, and the awards will be handed out Sunday.

Times critics Kenneth Turan and Justin Chang weigh in with their predictions of who and what will win in 11 key races this year. And, because they’ve put in the work of seeing these films all year long, who and what should win too.

Though “1917” is on an awards roll and has to be considered the favorite, my own choice, an admitted passion for “Ford v Ferrari,” notwithstanding, would be a victory for “Little Women,” an exceptional film that emphasizes what should be obvious: that stories about woman can involve us as fully and deeply, if not more so, than stories about men.

I know, I know: a foolhardy prediction buoyed by wishful thinking. With awards from numerous precursor groups including the Producers Guild of America (which, like the motion picture academy, uses a preferential ballot), “1917” is clearly the statistical favorite. But the stats have mattered less and less in recent years, and this year, “Parasite,” a movie with no small amount of guild support itself, has become the darkest of horses, the wildest of cards. Far more than last year’s “Roma,” Bong Joon Ho’s movie seems poised to become the first non-English-language film ever to win best picture — and what’s more, it deserves to be.

Quentin Tarantino (“Once Upon a Time ... in Hollywood”)

Mendes, like his film, has been winning consistently, but the low key but dazzling way Scorsese combines his innate skill with a lifetime’s worth of filmmaking experience in “The Irishman” makes this as impeccably directed a movie as I saw all year.

At the risk of contradicting myself, you can’t throw stats entirely out the window, and the Directors Guild of America, which gave Mendes its top prize, has as solid an Oscar-predictive track record as any organization out there. “1917” also seems likely to benefit from the academy’s penchant for long-take cinematography, as evidenced by recent double wins for Alfonso Cuaron (“Gravity,” “Roma”) and Alejandro G. Inarritu (“Birdman,” “The Revenant”). Mendes will likely join them in the two-time winners’ circle, though my vote would go to Bong for pulling off the year’s most fluidly virtuosic filmmaking without relying on an overweening formal conceit.

Leonardo DiCaprio (“Once Upon a Time ... in Hollywood”)

Phoenix’s work is the consensus choice of Oscar watchers, but I gravitated toward the performance Banderas gave in Pedro Almodovar’s “Pain and Glory,” a departure in tone from much of what he’s done before and a moving depiction of despair and salvation.

“Joker” isn’t the movie I’d give Phoenix an Oscar for, but I can hardly begrudge him his all-but-assured victory: From “The Master” to “You Were Never Really Here,” he’s been doing brilliant, under-recognized, under-the-skin work for years. (You almost want to give him an Oscar just to see another of those eloquently self-effacing speeches he delivered at the SAG and BAFTA ceremonies.) As for the actual best performance in this ridiculously strong category, I’d give Banderas’ exquisite melancholy and sardonic grace in “Pain and Glory” a narrow edge over Driver’s wrenching work in “Marriage Story.”

In all honesty, Zellweger was so strong in her depiction of Judy Garland’s travails that I will be fine if she wins, but the way Erivo as Harriet Tubman turned a historical icon into a completely convincing heroic human being was breathtaking.

Johansson has the trickiest assignment in “Marriage Story”: Given less screen time than Driver, she has to keep a grip on your sympathies as the partner who has already done her anguished soul searching before the movie even opens. And she aces that task with cool understatement, pinpoint technique (that monologue) and a quiet vulnerability that keeps poking through the character’s guarded surface. Still, everyone knows this Oscar has long been Zellweger’s to lose, and to her credit, her daringly counterintuitive performance as Garland isn’t your run-of-the-mill celebrity impersonation: She wears the late Hollywood legend with artful, almost deliberate unease, like a mask that keeps slipping.

Tom Hanks (“A Beautiful Day in the Neighborhood”)

It would be hard to find anyone who doesn’t think Pitt’s supremely natural performance as stuntman Cliff Booth doesn’t deserve every honor it’s getting, and I am in complete agreement.

To be sure, Pitt is as much a lead as DiCaprio is, maybe even more so. If “Once Upon a Time ... in Hollywood” is Tarantino’s tribute to old-school movie magic, then stuntmen like Cliff Booth may be the greatest of magicians and, as the ending makes clear, the most unsung of heroes. And the actor’s performance is a thing of beauty, of stillness incarnate; from that instantly iconic shot of him stripping off his shirt on a rooftop or the seductive restraint (up to a point, at least) with which he wields the threat of physical violence, few movies have seized upon his movie-star magnetism more brilliantly or intuitively. He’d be winning handily even if he weren’t the only contender in this category without an Oscar for acting.

Nothing against Dern’s magnificently showy performance in “Marriage Story,” but I was much more drawn to the way Robbie in “Bombshell” took the standard role of the naive ingenue and deftly underlined its pathos and vulnerability.

Like Phoenix, Zellweger and Pitt, Dern has won every significant precursor award, and she may outrank them all in terms of how much sheer industry goodwill she has on her side. She’s also nominated for a terrifically entertaining supporting turn that steals scenes in the grand Hollywood tradition. In the absence of Jennifer Lopez (“Hustlers”), my own pick would be Pugh for her supremely intelligent reclamation of Amy March in “Little Women,” incidentally one of three sterling performances she gave this season (see “Fighting With My Family” and “Midsommar” if you haven’t yet).

Tarantino’s Tarantino-esque adventures feels like the favorite, but I want to speak up for the art and sensitivity Noah Baumbach brought to taking on both sides of a relationship falling apart in “Marriage Story.”

Brilliantly constructed by writers Bong Joon Ho and Han Jin Won, “Parasite” has emerged as the unexpected favorite here, thanks to its wins with the WGA (where, it should be noted, “Once Upon a Time ... in Hollywood” wasn’t eligible) and the BAFTAs (where it was — and lost). While I’m also fond of the blistering, bittersweet comedy of Baumbach’s “Marriage Story” and the airtight whodunit plotting of Rian Johnson’s “Knives Out,” it’s been far too long since Almodovar’s “Talk to Her” (2002) that a film not in the English language has been recognized for its words. (And speaking of Almodovar, his “Pain and Glory” would have been quite a boon to this category this year.)

Sometimes the support for a film with multiple nominations coalesces in one category, and given its WGA victory, it looks this will be that category for “JoJo.” But I’m more impressed with the deft way Greta Gerwig honored the spirit of Louisa May Alcott’s classic novel while simultaneously personalizing and modernizing the material.

Gerwig’s ebullient and inventive script for “Little Women” is exactly the kind of literary adaptation we should want more of from Hollywood: not reverent but deeply respectful, with a personal signature that dovetails beautifully with long-codified material. That the academy would toss such an impressive accomplishment aside in favor of Taika Waititi’s “Jojo Rabbit,” with its ghastly Hitler-BFF shenanigans and aggressive cutesification of Christine Leunens’ novel “Caging Skies,” is simply unconscionable. And given that Waititi has already won WGA and BAFTA prizes for adapted screenplay, increasingly likely.

“The Edge of Democracy”

Should win: All of the above

Having also secured a nomination in the international feature category makes “Honeyland” the favorite, but the truth is each of the five nominated docs is so strong I have to say they all are equally worthy of the prize. And that doesn’t happen every day.

An award that many were once expecting to go to the transporting “Apollo 11” (which ultimately missed out on a nomination) will instead go to one of five strong films that focused on grim injustices and power struggles around the world. No easy predictions here; I suspect the excellent (and Obamas-produced) “American Factory” has the momentum, though “Honeyland,” which received unprecedented double nominations for documentary feature and foreign-language film, clearly has strong support as well. Neither outcome — in fact, no outcome in this category — would be undeserved.

Should win: “Pain and Glory”

The victory of Bong’s expertly crafted film is one the evening’s foregone conclusions, but there was something completely magical for me in how the veteran Almodovar pulled wildly disparate elements together to create a film so unexpectedly and inexpressibly moving.

This is the one “Parasite” victory you can bet the farm on. I almost wish Bong’s movie was not even nominated for this award, which too many voters will treat as a consolation prize. I also wish that the academy’s arcane submission rules (only one title per country can be considered) weren’t in effect so that — with no offense to a strong field of nominees — great movies like Nadav Lapid’s “Synonyms” and Celine Sciamma’s “Portrait of a Lady on Fire” could have had at least a shot at getting nominated.

“How to Train Your Dragon: The Hidden World”

Should win: “I Lost My Body”

Betting against Pixar in this category is not recommended, but France’s dark, strange and altogether wonderful “I Lost My Body” has not been the talk of the animation world for nothing.

Should win: “I Lost My Body”

In a solid if not overwhelmingly inspired field, you have to hand it (ahem) to the French director Jeremy Clapin for a moving and suspenseful film about a severed appendage skittering about Paris in search of its owner. I wouldn’t mind seeing it tie with the likely winner, “Toy Story 4,” which would make for a fittingly poetic hand-and-Forky combination.