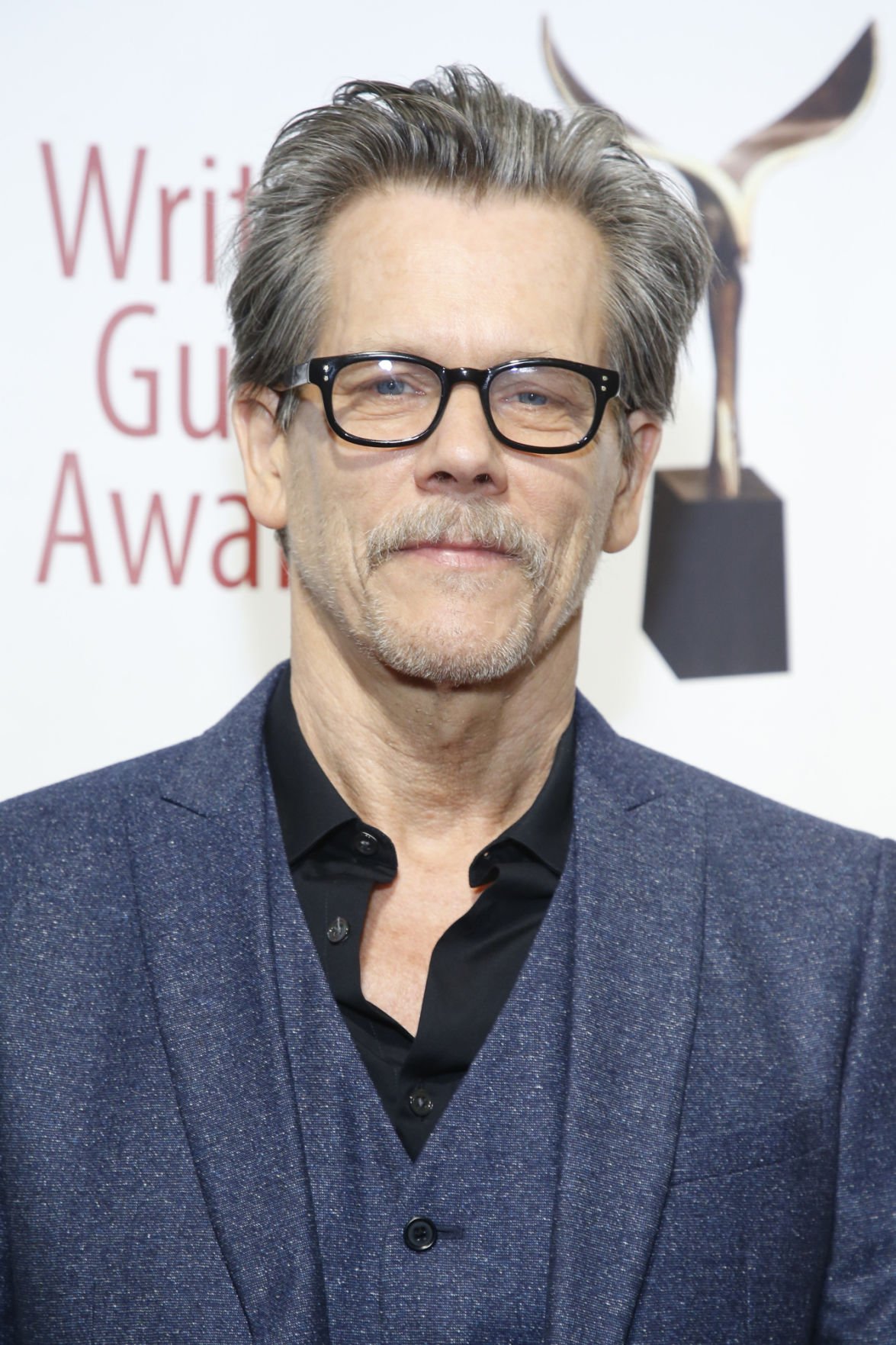 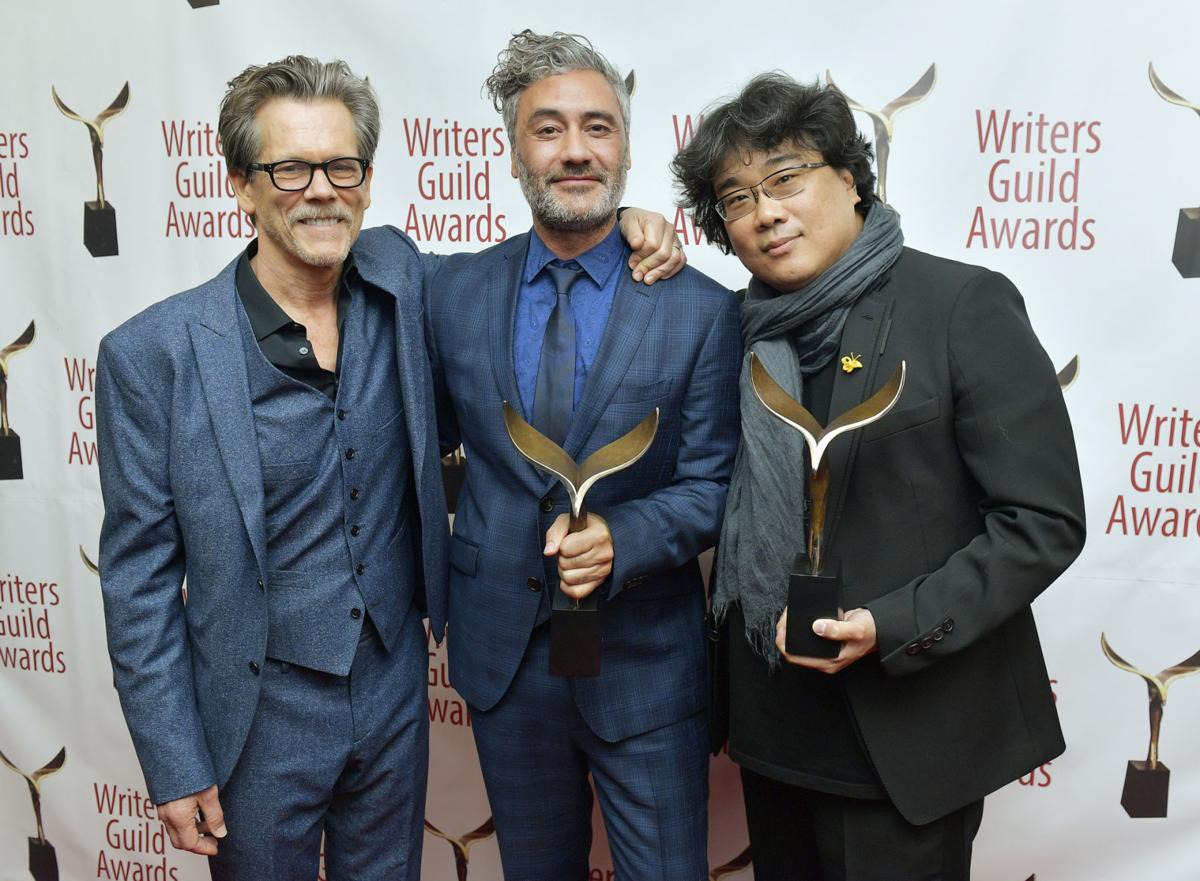 Kevin Bacon, Taika Waititi, and Bong Joon Ho pose backstage at the 72nd Writers Guild Awards at Edison Ballroom on February 01, 2020 in New York City. In Bacon's new movie, 'You Should Have Left,' he stayed in isolation in a cabin and got a little spooked. (Roy Rochlin/Getty Images for Writers Guild of America, East/TNS)

Kevin Bacon, Taika Waititi, and Bong Joon Ho pose backstage at the 72nd Writers Guild Awards at Edison Ballroom on February 01, 2020 in New York City. In Bacon's new movie, 'You Should Have Left,' he stayed in isolation in a cabin and got a little spooked. (Roy Rochlin/Getty Images for Writers Guild of America, East/TNS)

The 61-year-old actor stars in the psychological horror movie “You Should Have Left” as a paranoid husband tormented by supernatural terrors while staying in a secluded house in the Welsh countryside.

During production, when the cast and crew packed up and returned to a nearby village for the night, Bacon bunked by himself in a cabin used as a dressing room.

The isolation left him feeling more than a little unsettled — though it did help him develop his character.

“I stayed in this little cabin in the middle of nowhere in Wales, and I can tell you that everyone would leave, and the trucks would roll away and the sun would set, and there was a kind of darkness and stillness and quiet,” Bacon told the Daily News.

“Honestly, I’ve been to a lot of places, and I’ve never experienced it quite like that. Sometimes after a day ... of working on that kind of stuff, my mind would get a little weird being alone, but I kind of liked it. It was good for the work.”

The movie, which debuted Thursday via video on demand, serves as a reunion for Bacon and director David Koepp, who worked together on the 1999 haunted-house film “Stir of Echoes.”

Bacon also produced “You Should Have Left,” which is an adaptation of a 2017 book by German author Daniel Kehlmann.

For years, Bacon wanted to explore the horror genre again with Koepp. It was the “Footloose” star’s wife, actress Kyra Sedgwick, who suggested they look into making a scary movie about a marriage.

Bacon and Koepp began discussing ideas, and when the actor came across Kehlmann’s novella, he realized the story aligned with the ideas he and the director were envisioning.

“You Should Have Left” sees Bacon’s character battle dark thoughts and grapple with his checkered past amid concerns that his younger wife, an actress played by Amanda Seyfried, is cheating on him.

“It was very specific that David and I wanted to make her an actress,” Bacon explained.

“When you go off and make a movie ... and one person is with an actor, it’s sometimes really tough to understand the level of intimacy that you get with a crew and with a cast. ... We’re called upon to be extremely emotional and extremely vulnerable really, really quickly. That can create a deep connection to people, and if you’re not somebody who’s in the industry especially, that can just lead to paranoia.”

The film marks the latest thriller for Bacon, who also starred in “Flatliners” and “The Darkness.”

“I like films that have to do with life or death,” Bacon said. “I’ll watch a romantic comedy like the best of them, but even in a romantic comedy or a straight-up romance, there’s kind of this idea that if I don’t end up with this person, it’s just going to kill me. It turns into a life or death situation. High stakes.”

At their best, Bacon said, horror movies “become real great acting challenges, because you can’t just make one choice: ‘Ah, I’m scared, I’ve got my scared face. I’m going to wear that for an hour and 45 minutes.’ That really becomes kind of boring.

“To dive into deeper character stuff and to really try to create good, well-rounded characters and very emotional scenes, I think there’s a lot of opportunity for that in the genre.”

Bacon’s success has long transcended any particular genre, with the feel-good “Footloose” and the legal drama “A Few Good Men” among his most celebrated works. He’s also at the center of the game known as “Six Degrees of Kevin Bacon” that suggests any actor can be connected back to Bacon by six or fewer movies.

More than anything, Bacon looks for strong roles that are different from his last ones. He says “You Should Have Left” is no exception.

“That’s one of the great things about being an actor,” Bacon said. “As you grow and you age, you have these life experiences and they change you, and then the roles change along with them. I feel so grateful that I have this gig for that very reason, and I have no intention of slowing down.”