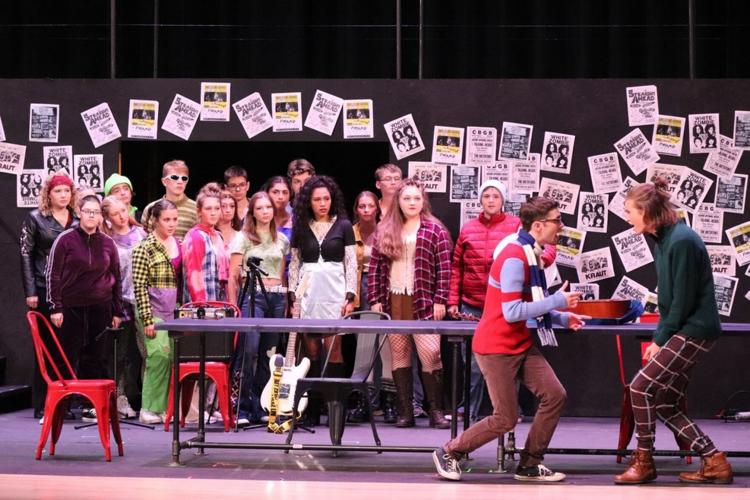 In foreground, with the cast of “Rent: School Edition,” Joshua Marra and Jared Bast rehearse a scene for the Stage Notes musical, which opens tonight at the Dulles State Office Building. / Photos courtesy of Tina Morrison and Amy Stone 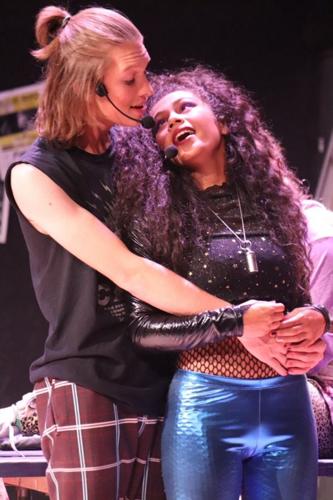 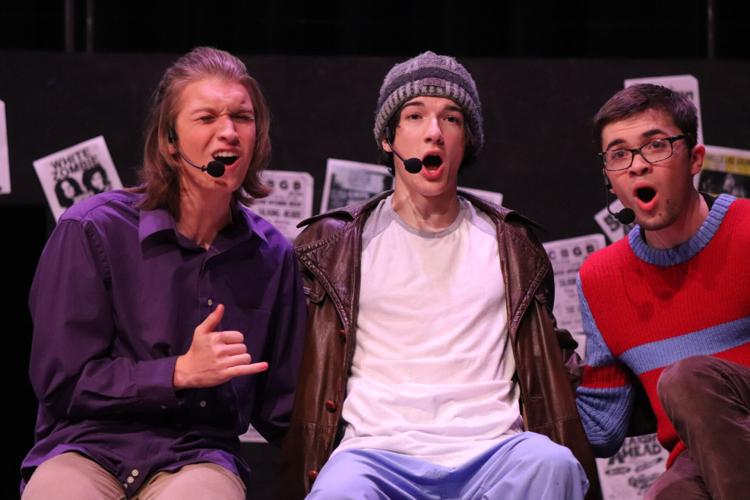 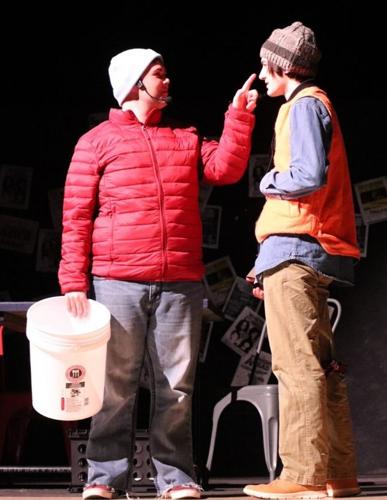 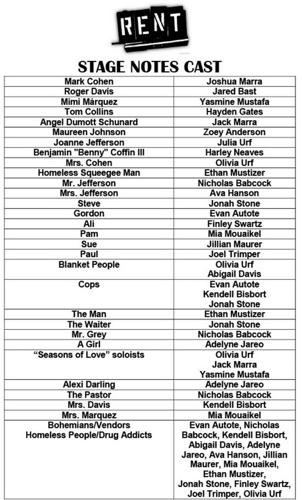 In foreground, with the cast of “Rent: School Edition,” Joshua Marra and Jared Bast rehearse a scene for the Stage Notes musical, which opens tonight at the Dulles State Office Building. / Photos courtesy of Tina Morrison and Amy Stone

WATERTOWN — The nonprofit youth theater group Stage Notes, which has a foundation of giving back to the community and has had its “Performance With a Purpose” motto hampered the past two years due to the pandemic, is ready to take the stage again.

Stage Notes, the group for exceptional theater students founded by Ticia K. Aumell in 2009, will present a challenging musical that hasn’t been seen on local stages and one that is an unusual selection for such a young cast.

“I’ve never considered doing it either,” said Mrs. Aumell, artistic director. “There have been other years when we looked at it for a minute and then said, ‘Nah — I don’t think so.’ But every year, we say the show picks us, and it happened again this year. We looked at it again and said, ‘This is it. It’s the year to tell the story and these are the kids to tell the story.’ It just feels right.”

Stage Notes will present “Rent: School Edition,” at 7 tonight and at 7 p.m. Friday and Saturday at Dulles State Office Building.

“Rent,” which ran on Broadway for 5,123 performances from 1996 to 2008, is a rock opera about young artists struggling to survive in the shadow of HIV/AIDS in the East Village of New York City from 1989-90. It won a Tony Award for Best Musical and the Pulitzer Prize for Drama. Its music, lyrics and book is by Jonathan Larson, who died in 1996 at the age of 35 due to an aortic aneurysm.

The license holder for “Rent,” Musical Theater International, says its “Rent” adaptation has been carefully done, working with the Larson estate to retain its dramatic intent with minimal changes to language and the removal of one song, “Contact.”

“This isn’t an easy show,” said Mrs. Aumell. “It’s vocally hard, the material is hard. We could have picked a score we knew we could sing and a story we know we could tell. Instead, we said to the students, ‘We believe in you. Let’s do this.’ They rose to the occasion.”

Last summer, the theater group staged “The Theory of Relativity” as its first virtual production, recorded at Case Middle School. Michael Schanely, Watertown City School District audio/video technician, did the recording and editing for the production. No Stage Notes musical was produced in 2020 due to the pandemic.

The theme of “Rent” also played a role in Mrs. Aumell selecting it for this summer’s production.

“It was all of the themes — struggling to create art, fighting a disease, surviving with your circle of friends, learning how to measure you life in love — all of those themes just resonated so strongly with us, that we thought now’s the time to tell the story,” she said.

The fact that the pandemic also sidelined high school musicals brought on a challenge for Mrs. Aumell and her co-directors. Among the 21 students in Stage Notes are six seniors — four who were freshmen in 2019.

“That’s hard for us because part of our program is the students teaching the next group of students what it’s like to be in Stage Notes and what’s expected to work at this level,” Mrs. Aumell said. “That’s been missing and we’re really like starting over, re-teaching all of our expectations, and working at the level that we want these students to work. Coming from their high schools, they haven’t had the same sort of education because they missed out on a year or two of their own theater programs. But with that, the students who we have in Stage Notes came in with great attitude. They want to be pushed and challenged.”

Yasmine G. Mustafa, who plays Mimi Márquez, the lead female in “Rent,” graduated in June from Watertown High School. Mimi is an exotic dancer, is HIV positive and a drug addict. The character is a good friend of Angel, played in the Stage Notes production by Jack Marra.

“Through both of their journeys and illnesses, you can see how it has brought people together, how it’s torn people apart and how it affected people at the time, similar to how COVID did,” Miss Mustafa said.

“That’s one of the main reasons why we wanted to tell this story. ‘Rent’ is about this community of struggling artists. Some of them are struggling financially, mentally and they’re just trying to get together and not just survive, but live.”

Miss Mustafa, who will attend the University at Buffalo in the fall to study biomedical sciences, added, “It’s all of these people just trying to survive and they learn how to live and create things in that time. They’re pushing through it and staying together. I think that’s what will really resonate with people.”

“It’s a real powerful show,” he said. “You can relate to at least one character, but comparing it to now, it’s a story about people living with disease in the height of the AIDS epidemic. It’s easy to relate to COVID and trying to find a reason to keep going and how they are living for today.”

Mr. Marra, who plans to attend Jefferson Community College in the fall, added, “I hope the audience is able to escape from the world a little bit and leave a little more hopeful for the future and what they can do in a day.”

Like the other Stage Notes performers, he’s happy to be back on stage in front of a live audience.

“It’s been difficult,” he said. “It’s something you kind of relied on every year and took for granted that it was always going to be there. And then, it got taken away, and it felt like a community had dispersed and wasn’t together anymore. It’s been good, rebuilding it.”

The Stage Notes Foundation over the years has donated more than $50,000 to local organizations.

In a letter to Stage Notes supporters, Mrs. Aumell wrote, “In the past two years, technology has afforded the theater world the option of crafting performance and events solely for an online audience, but even these innovative performances can’t substitute for the power of a stage performance. Physical presence is part of the essence of theater, as is occupying a common space.”

n TICKETS: $15 general admission and $12 for students and senior citizens. They are available at the door, or in advance at Kinney Drugs stores on Coffeen and Washington streets.

n OF NOTE: School supplies will be collected at all performances for Watertown Urban Mission’s Backpack Program. The musical is made possible by a grant from the LEAD Council of the Northern New York Community Foundation.