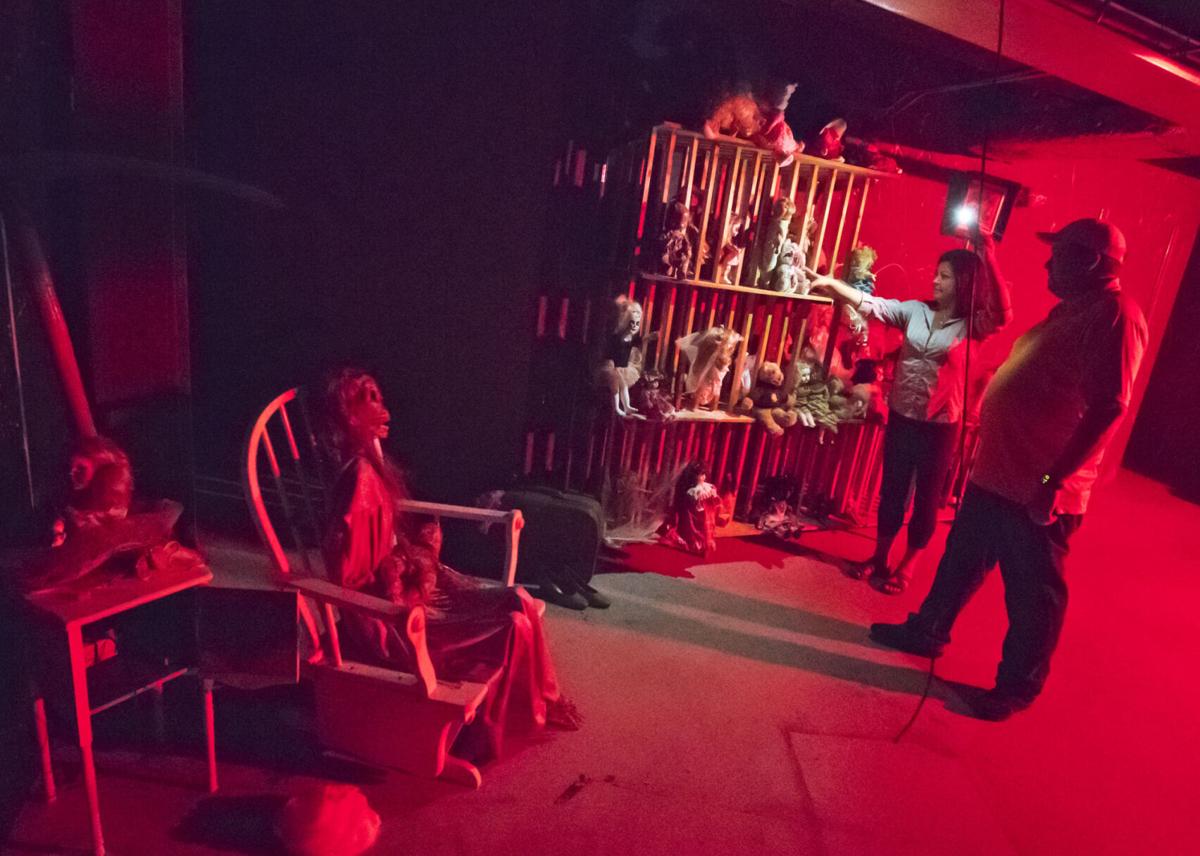 Jessica Diamond arranges a display of dolls, while Justin Blanchard watches at the Highway To Horror space at the St. Lawrence Centre mall in Massena. Christopher Lenney/Watertown Daily Times 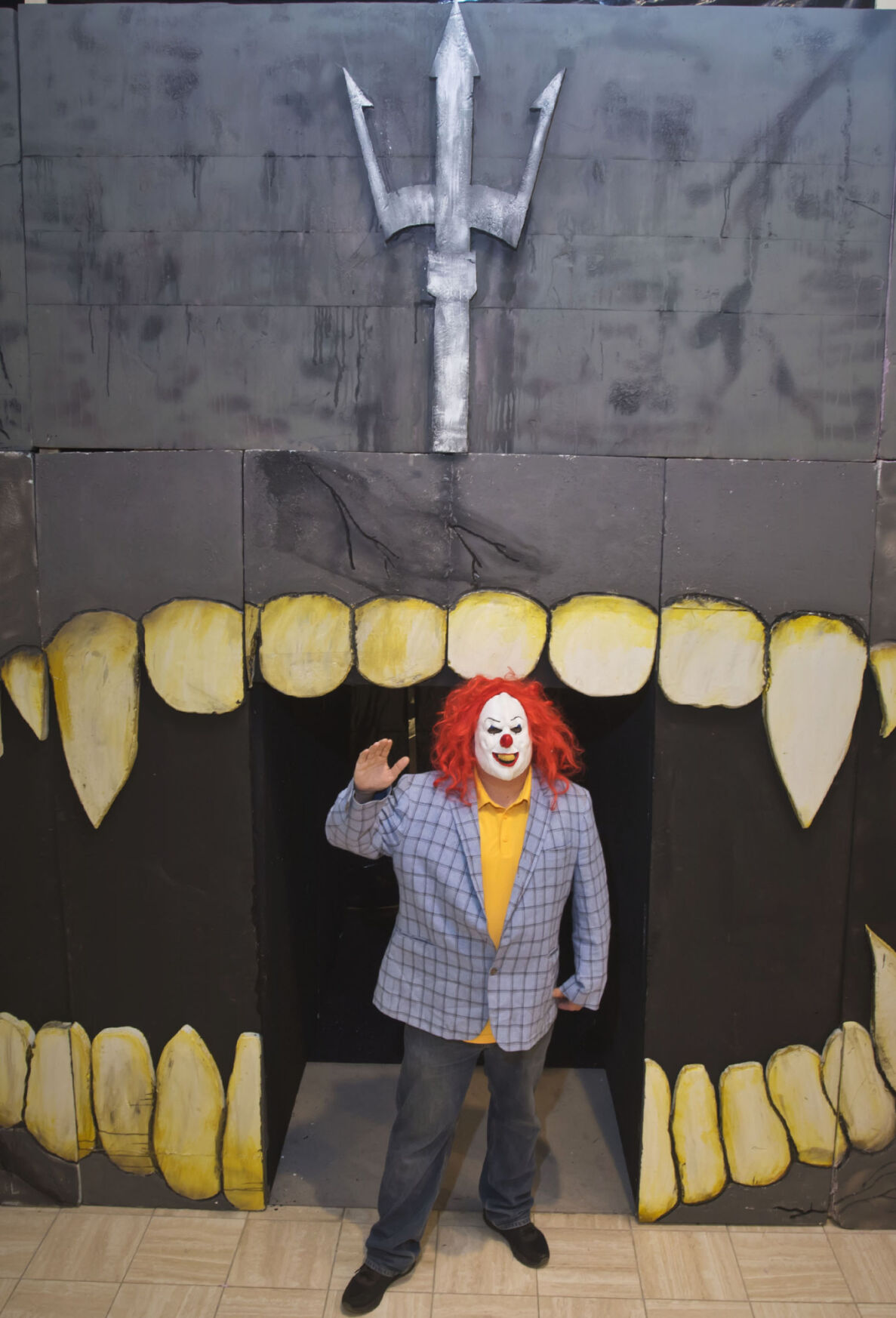 A creepy clown welcomes visitors to the Highway To Horror entrance, which features a trident similar to the one over the Dwight D. Eisenhower Lock tunnel in Massena. Christopher Lenney/Watertown Daily Times 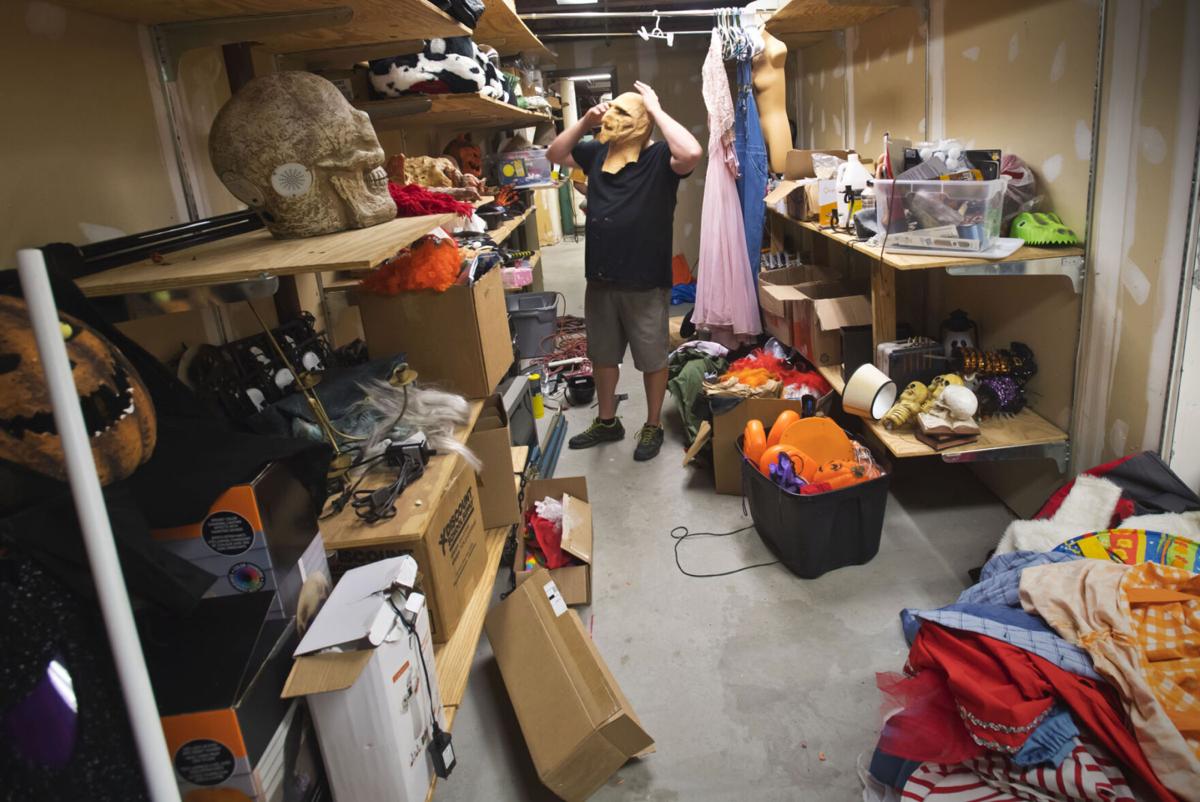 Wearing a mask, Cory Blanchard goes through the prop room at the Highway To Horror space at the St. Lawrence Centre mall. Christopher Lenney/Watertown Daily Times 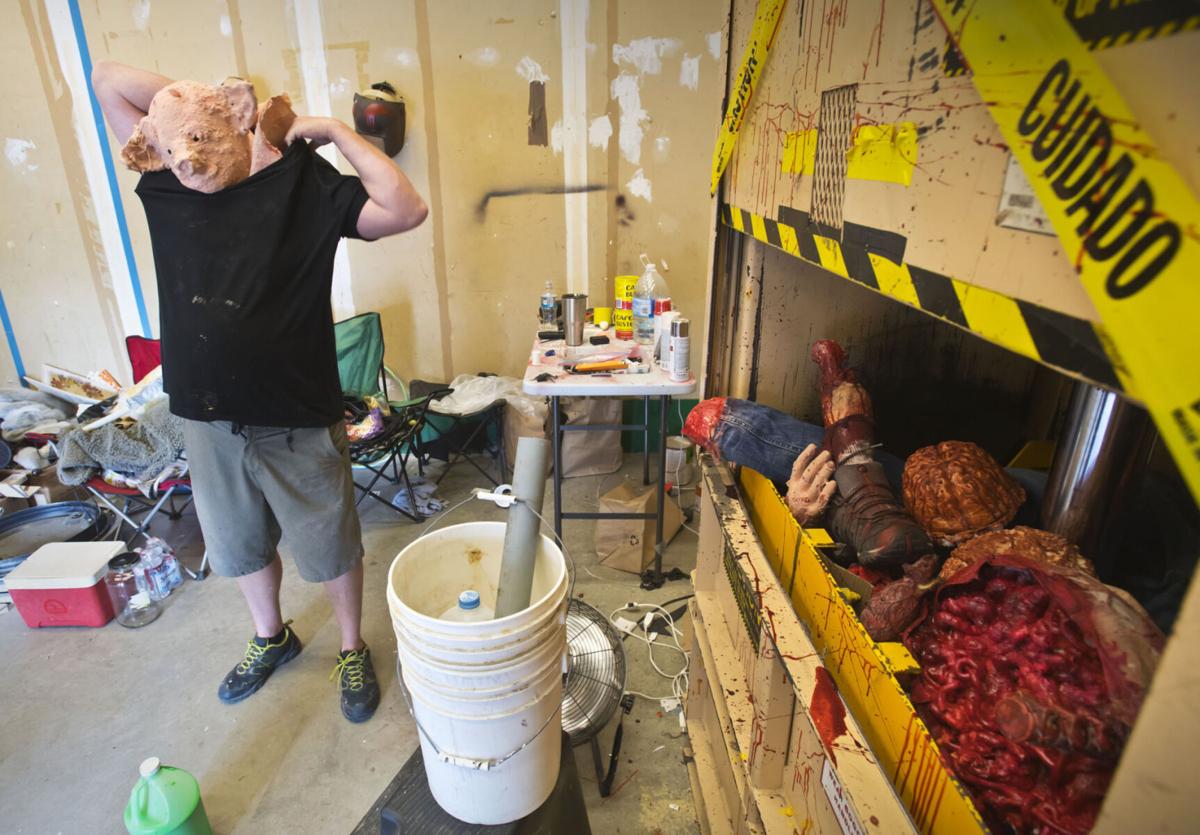 Cory Blanchard tries on a mask in his Highway to Horror workshop area at the St. Lawrence Centre mall. Christopher Lenney/Watertown Daily Times 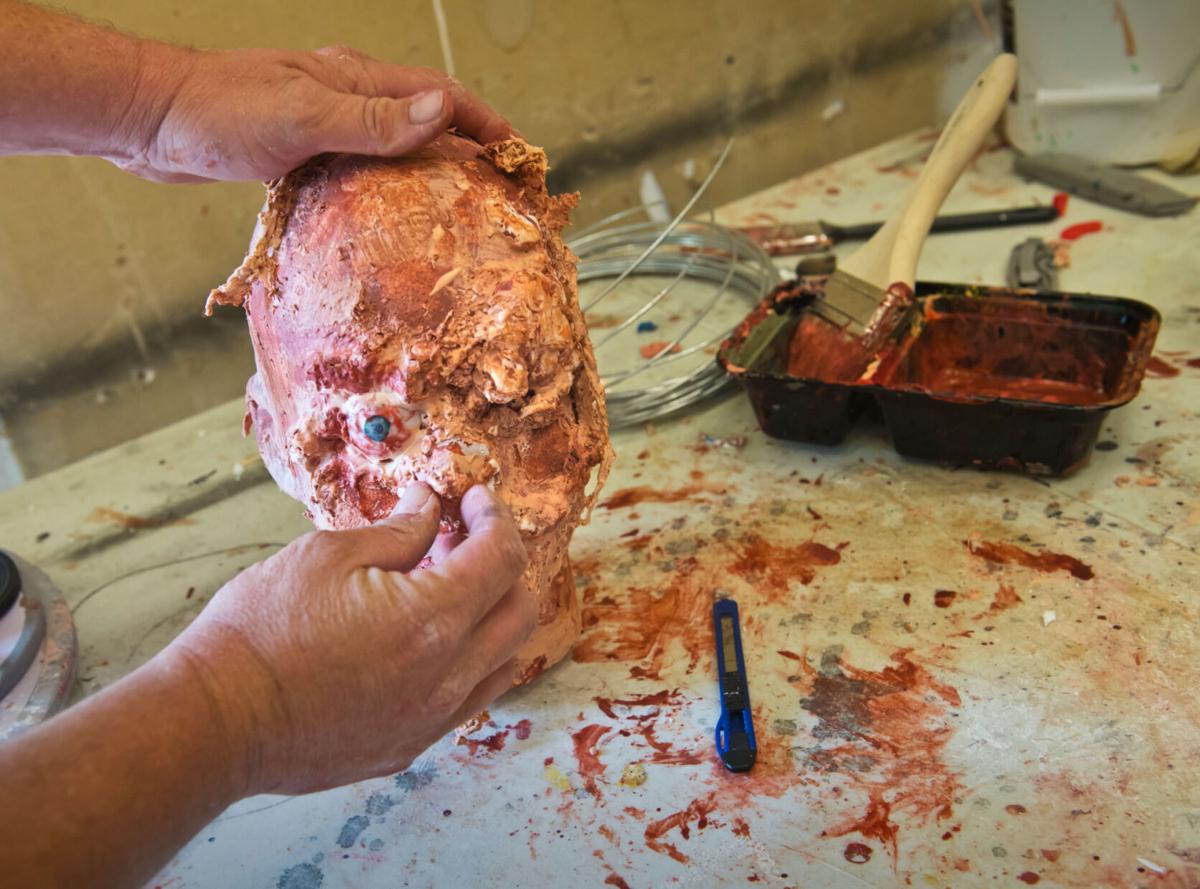 Cory Blanchard adjusts the nose on a creepy creation in the Highway To Horror workshop. Christopher Lenney/Watertown Daily Times 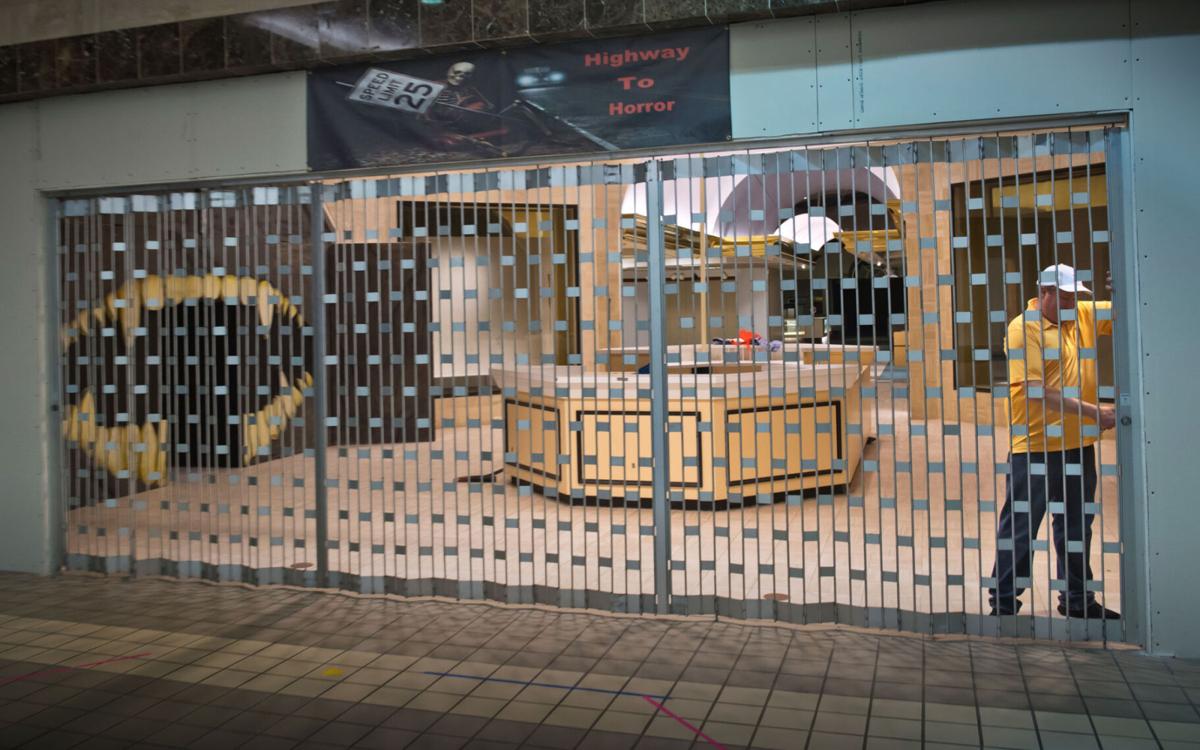 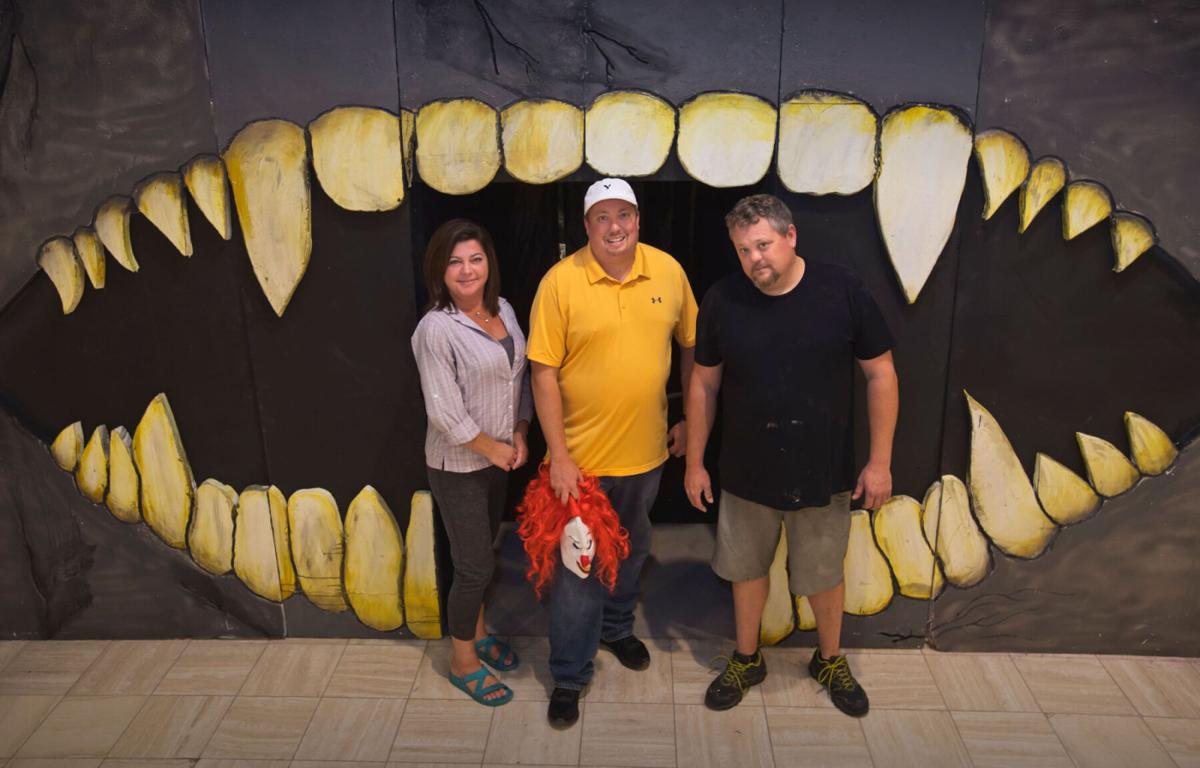 Jessica Diamond arranges a display of dolls, while Justin Blanchard watches at the Highway To Horror space at the St. Lawrence Centre mall in Massena. Christopher Lenney/Watertown Daily Times

Wearing a mask, Cory Blanchard goes through the prop room at the Highway To Horror space at the St. Lawrence Centre mall. Christopher Lenney/Watertown Daily Times

Cory Blanchard adjusts the nose on a creepy creation in the Highway To Horror workshop. Christopher Lenney/Watertown Daily Times

MASSENA — The next chapter of last year’s Highway To Horror has arrived at the St. Lawrence Centre mall, but unlike last year’s drive-through event, all the scares are now inside at the former Bon-Ton store.

“The first year we did a drive-through, it went all the way around the back end of the building and finished up at the old Sears. It had different stops along the way,” organizer Justin Blanchard said.

The highway included stops at a movie theater scene, clown town and more.

COVID-19 was part of the picture last year. So was not-so-friendly weather.

“We made the best of the situation,” he said. “There was a lot of good feedback. We actually had a lot of people that have asked why we didn’t do the drive-through and a lot of it is the weather. I mean, it’s tough. It was weather-dependent.”

That, he said, made it difficult for the actors in the cold weather. But they’ll be warm this year inside the mall.

The haunt stretches for about a half-mile through a maze of sights, sounds and creatures, some of them alive, others not so much. The store is 57,000 square feet, and the haunt takes up about 10,000 square feet. The walk-through starts on the left hand side and snakes around to some stairs, where visitors head up, are greeted by more haunts and then make their way back down.

“You stop, then go. There are 10 different scenes,” said Cory Blanchard, Justin’s brother, who assists with setting up the haunt.

Justin estimated it will take about 12 to 15 minutes to make it all the way through because there’s a lot of detail.

“The actors control the pace,” he said.

Anyone who went through last year’s highway will find things are different this year.

“You can’t be the same. You have to change it up a little bit this year,” Justin said. “Last year they drove the highway to horror. I’m not going to do any spoilers, but we have some plans coming up in the next phase of the highway.”

It’s been a labor of love for the brothers. Visitors enter through a mouth with sharp teeth, created by Cory.

“He did all that by hand,” Justin said. “Everything you see here is hand-made or purchased. It was all out of our pockets.”

They started to assemble the haunt around March or April.

“We started to get stuff together,” Cory said.

“I would say at least three to four months straight,” Justin said.

It runs from 6 to 10 p.m. every Friday and Saturday in October. Tickets, which are being handled by Justin’s girlfriend, Heather Smith, are $15.

“We don’t get any donations, we are operating as a business,” Justin said. “We still try to donate back. Those donations come back to the community during Trunk or Treat. Phillips Memorial purchased 20 tickets to be given back out to the winner of Trunk or Treat.”

For more information or to purchase tickets, visit the Highway to Horror Facebook page, wdt.me/horrorFB.