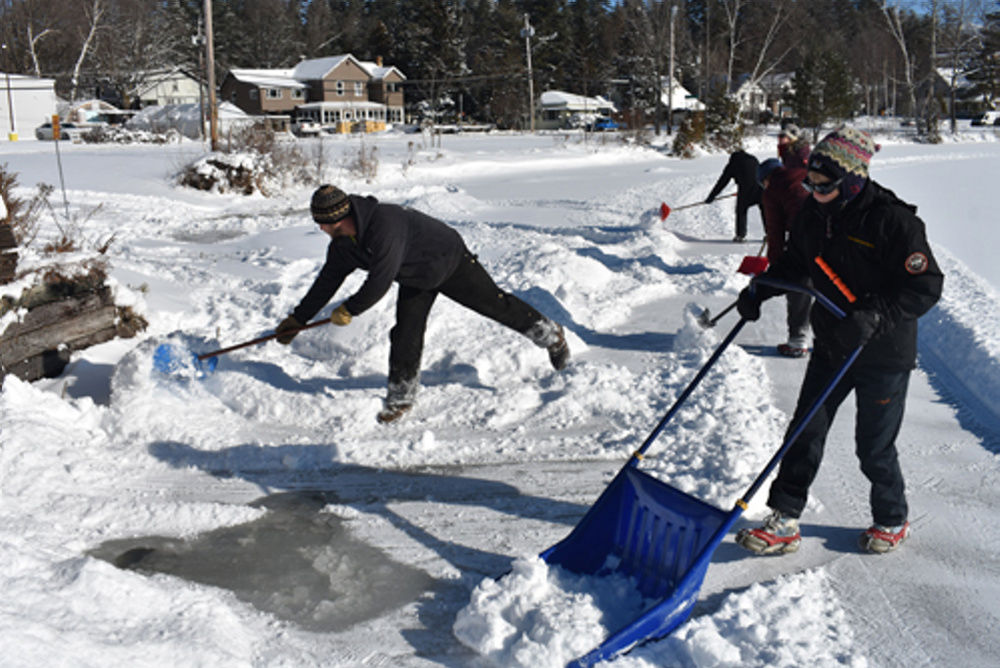 Ice Palace workers shovel snow off Lake Flower in Saranac Lake on Friday. Some of the ice was still slushy and not ready for building the Winter Carnival Ice Palace. Griffin Kelly/Adirondack Daily Enterprise 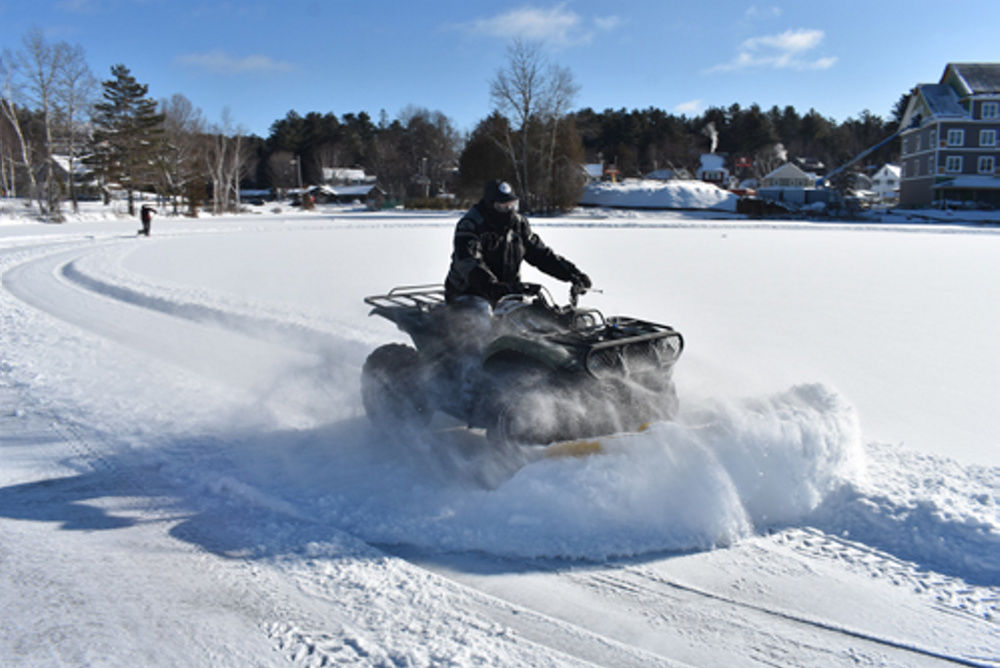 Ice Palace workers shovel snow off Lake Flower in Saranac Lake on Friday. Some of the ice was still slushy and not ready for building the Winter Carnival Ice Palace. Griffin Kelly/Adirondack Daily Enterprise

SARANAC LAKE — As volunteers in the Ice Palace Workers 101 shoveled snow off frozen Pontiac Bay on Friday afternoon, Director Dean Baker drove a four-wheeler plow in circles. Every circle got smaller with each loop.

Some of the ice was still slushy, and Lake Flower water leaked through. Caper Tissot came prepared with a pair of ice escape picks hung around her neck.

The build for this year’s Winter Carnival Ice Palace has been delayed a few times. December and January have been unseasonably warm.

In a phone interview Friday, Baker said with today’s technology, it’s easy to get a palace built in about a week, but Mother Nature has to cooperate. He said he’s not feeling very good about this year’s, despite subzero temperatures Friday morning.

“There’s so much slush and a crust of ice above the good ice with water between them, and you can’t really do anything yet,” he said. “You have to clear the snow off, and I hear we have more snow coming tomorrow.”

Baker has worked with the IPW for 38 years, 14 as the director. He said a lot has changed since he first started. Back then, the crew had only one crane and no tractors, and workers had to haul ice by hand to the shore. It was a more arduous and physical process.

“In the old days, and I’m talking back when I started in the (19)80s, we would build for two or three weeks and continuously build,” he said. “We had much less equipment and fewer volunteers back then. Nowadays, we can build one in six or eight days easy. We may have to modify the size of it, but we can build it.”

Baker said the IPW averages about 100 volunteers every year.

Snow is a sign of winter and means great things for ski mountains and cross-country trails, but it’s not what you want when trying to build an ice palace.

“Snow is an insulator,” Baker said. “We need the ice to harden up, so we can cut it.”

This is far from the first year the Ice Palace has run into trouble. Last year, when the Winter Carnival theme was “Prehistoric Park,” a February thaw and warm rain closed the palace for a few days, dinosaur ice sculptures were wrapped in tarps, and the “2” in the “2019” sculpture melted completely. It melted even more in 2016 as captured in the documentary “Ice Palace, A Love Letter.” In 2005, they had to build the palace during Carnival week and tear it down immediately afterward.

Baker said he’s never experienced a year without a palace.

Despite looking very much like a castle, it is a palace, and the locals will correct you if you get it wrong.

This year’s Winter Carnival theme is “Myths and Legends,” which Baker said lends itself nicely to the palace design.

“It’s very hard to build to a theme unless it’s something like medieval times,” he said. “This year is going to be a little different. This year’s design won’t be a box.”

Baker said he hopes to start cutting ice by Sunday or Monday.

Is there a festival that goes with this? If yes, when is the Winter Carnival Ice Palace?