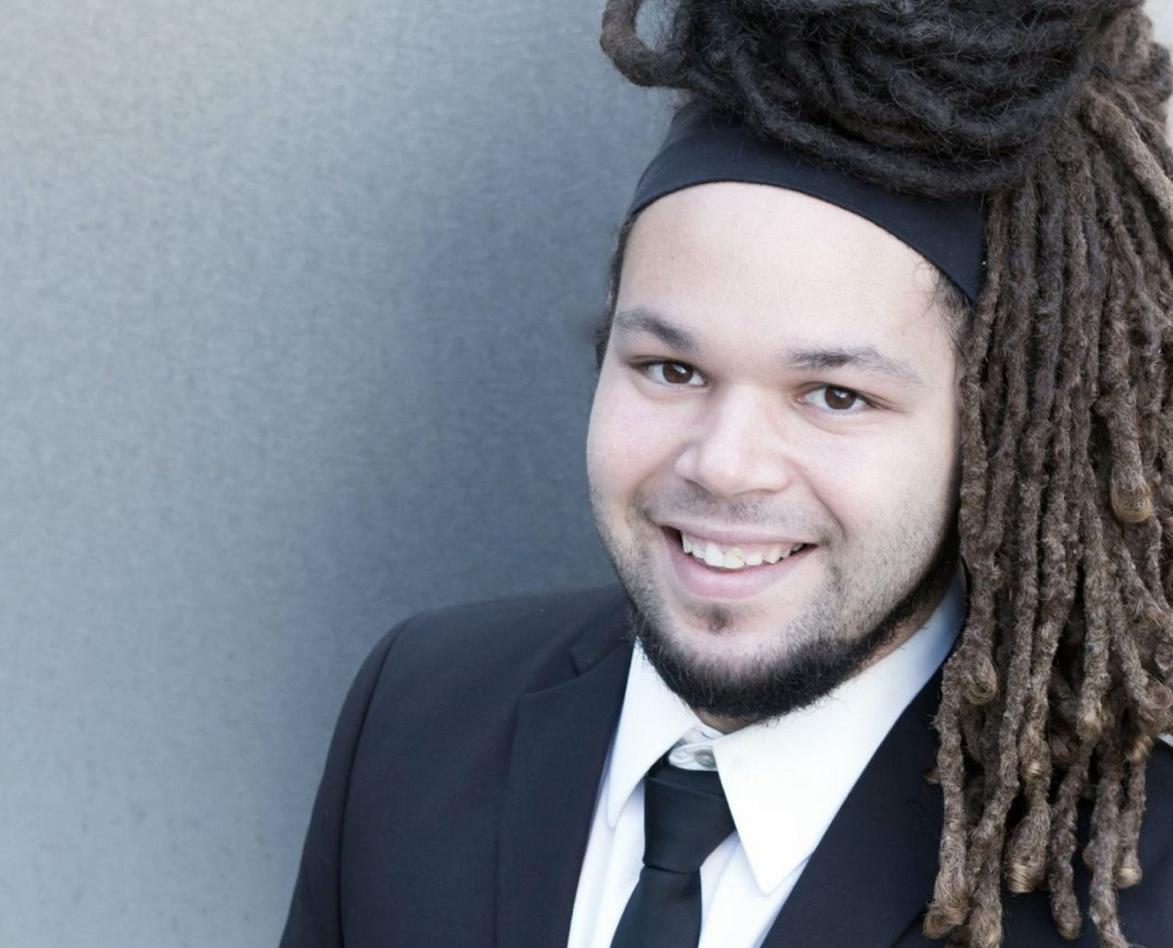 Above, Tracy L. J. Robertson has a busy musical career in Los Angeles. This is the photo from his bio page of the a cappella group m-pact. The San Francisco Chronicle calls m-pact “one of the best pop-jazz vocal groups in the world.” mpact.com At left, Billie Eilish gathers her golden Gramophone trophies at last month’s Grammy Awards, where Mr. Robertson was one of several who sang backup for Eilish’s performance of “When the Party’s Over.” CBS 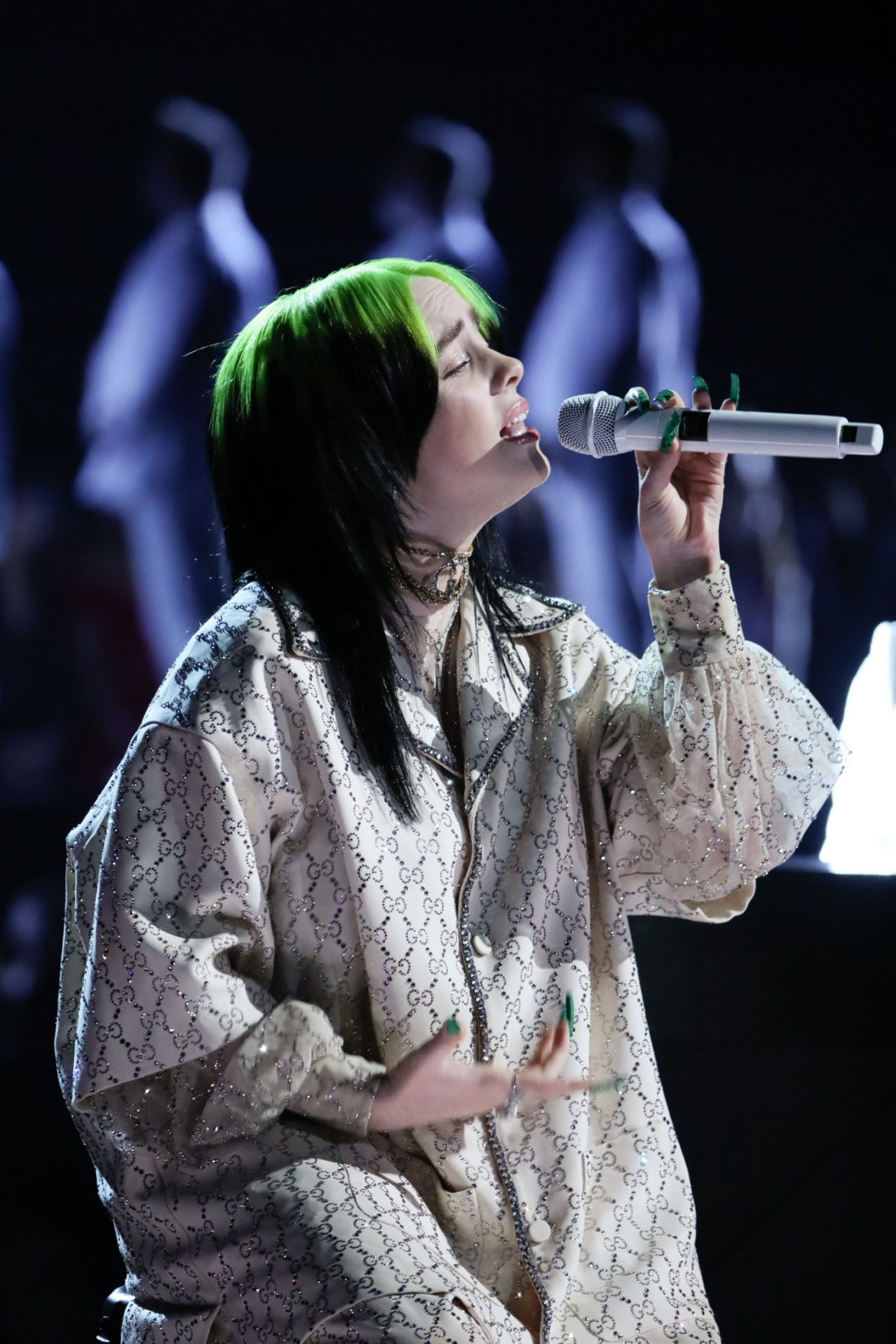 Billie Eilish sings “When the Party’s Over” at the Jan. 25 Grammy Awards. Indian River Central graduate and north country native Tracy L.J. Robertson was one of 24 singers who provided backup vocals for the song. Some of the singers are seen in the background. / CBS

Above, Tracy L. J. Robertson has a busy musical career in Los Angeles. This is the photo from his bio page of the a cappella group m-pact. The San Francisco Chronicle calls m-pact “one of the best pop-jazz vocal groups in the world.” mpact.com At left, Billie Eilish gathers her golden Gramophone trophies at last month’s Grammy Awards, where Mr. Robertson was one of several who sang backup for Eilish’s performance of “When the Party’s Over.” CBS

Billie Eilish sings “When the Party’s Over” at the Jan. 25 Grammy Awards. Indian River Central graduate and north country native Tracy L.J. Robertson was one of 24 singers who provided backup vocals for the song. Some of the singers are seen in the background. / CBS

When Tracy L.J. Robertson, found himself on a Los Angeles stage for the Grammy Awards on Jan. 25, it was just another step of what a love of music and performance has reaped for him.

The 2008 graduate of Indian River Central School has been singing in organized vocal groups since the age of 7. Nine years ago, he told the Times, “Singing is something I’ve been around so much, I can’t imagine doing anything else.”

Mr. Robertson is now doing what he loves, and making a living at it in Los Angeles, where he moved in the fall of 2015.

A few days after the Grammys, in a phone interview from his home in Los Angeles, Mr. Robertson reflected on his Grammy performance, where he was one of 24 singers backing up Billie Eilish, 18, who took home five golden Gramophone trophies, including for Best New Artist and Best Pop Vocal Album.

“This whole idea of having a full-on career of performing music was just so other-worldly to me,” Mr. Robertson said. “There’s all kinds of things I never imagined for myself. I just found myself in situations more and more often. The thought never occurred to me that this was something I could put on my bucket list.”

Mr. Robertson is the son of Tracy L. and Kari S. Robertson. The elder Mr. Robertson is a retired art teacher at Indian River and Mrs. Robertson, also a former teacher, is a versatile artist, with skills ranging from pottery to singing. The couple, formerly of Rutland Center, moved to Ithaca a few years ago.

At the Grammys, seen on CBS, Mr. Robertson wasn’t front and center and neither his nor any of his co-backup singers’ faces were seen. Their figures were background shadows as Ms. Eilish sang, “When the Party’s Over.” Regardless, Mr. Robertson said it was something he “never imagined” could happen to him.

“It’s kind of like beyond my hopes and dreams kind of thing,” he said.

He was especially impressed by how smoothly the Grammys was run as a production.

In Los Angeles, Mr. Robertson is a singer, instructor, instrumentalist and director. The route that took him to the Grammy stage with Ms. Eilish began with Justin Timberlake.

Mr. Robertson said that a few years ago, one of his music industry contacts reached him to see if he could sing on a music video by Mr. Timberlake. He agreed, and that contact reached him again and told him about the gig at the Grammys.

A recording session was held before the Grammys so the backup singers could create the soft background vocals for “When the Party’s Over.” At the live performance, Mr. Robertson and the backup choir lip-synced the backup vocals.

“That, way, they have a lot more control,” Mr. Robertson said.

Ms. Eilish, who did not lip-synch at the Grammys, attended the recording sessions where the backup singers recorded for “When the Party’s Over.”

“I just think that she’s an amazing human,” Mr. Robertson said. “I ddn’t get a chance to interact with her personally one on one. She had pointers and the way she would express herself was super cool, super chill and she was so gracious and grateful that we were there.”

Mr. Robertson is a 2014 graduate of Berklee College of Music in Boston, which he attended on full scholarship. He transferred there after two semesters at SUNY Fredonia.

At Berklee, Mr. Robertson was a member of the a cappella group Pitch Slapped. It competed in season two of the NBC show “The Sing-Off.” Mr. Robertson wasn’t in the group when it recorded for the show in Los Angeles in the summer of 2010, but he joined the group that fall, with the contest airing that October/November.

But the experience helped Mr. Robertson to make contacts in Los Angeles.

In L.A., Mr. Robertson is also an instructor at the Silver Lake Conservatory of Music, teaching piano and voice lessons. He’s a former instructor at Los Angles College of Music.

He’s still involved with an a cappella group, touring with the Los Angeles-based M-Pact, which the San Francisco Chronicle calls “one of the best pop-jazz vocal groups in the world.”

He also works with Urban Voices Project. Its self-described mission is to create “supportive community spaces with music to bridge vulnerable individuals to a sense of purpose and improved health.”

His particular project at Urban Voices that he conducts with others is exploring “empowering messages” from pop hits.

“We jam out on them and we also get people relating to them,” Mr. Robertson said. “We talk about what the lyrics are saying. That’s where the non-denominational religious service aspect comes in.”

The sessions, he said, are held in at-risk communities.

“I’m getting a chance to get reconnected in a powerful way to what it is about music that was always so inspiring to me,” Mr. Robertson said.

All of these musical projects, Mr. Robertson said, couldn’t be possible without the support he’s received over the years— from his parents to teachers. His parents, he said, have allowed “me to chase this thing” and noted one particular teacher, Daniel Hammond, who helped to guide him. Mr. Robertson attended Carthage Central School District, where his mom taught, until grade 9. Mr. Hammond, now band director and music teacher at Alexandria Central, taught at Carthage while Mr. Robertson attended that school.

“He got me involved in so many musical things that I never would have experienced if he hadn’t been just a cool, interesting guy who took an interest in me and saw that I had a little bit of extra drive to get involved with this stuff,” Mr. Robertson said. “It never occurred to me it was drive. It was just stuff that was legitimately interesting to me.”