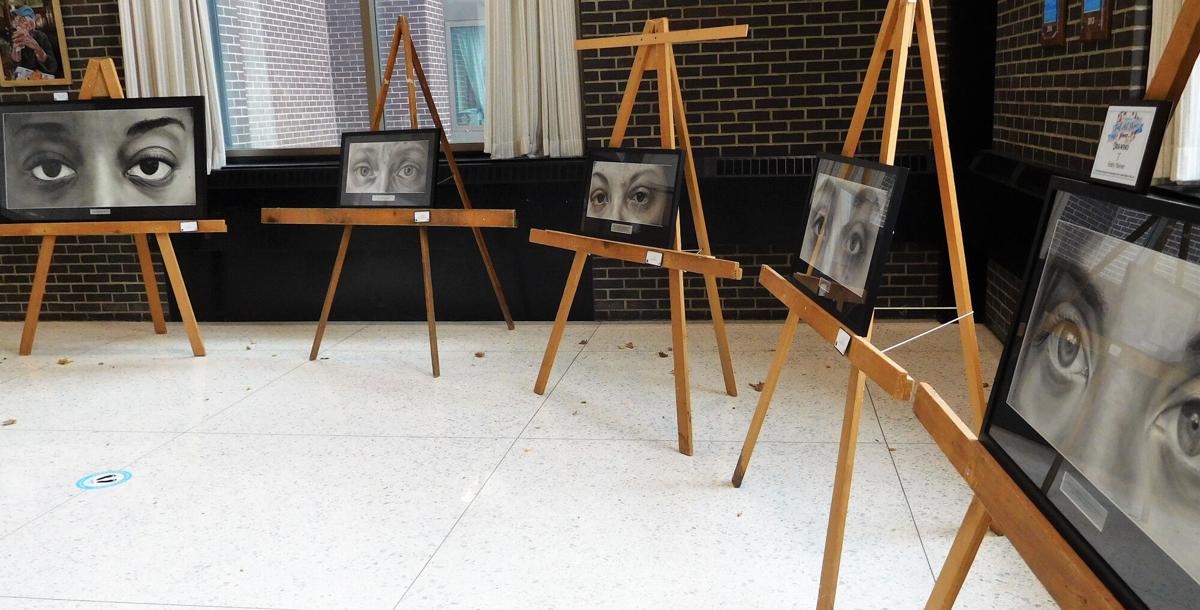 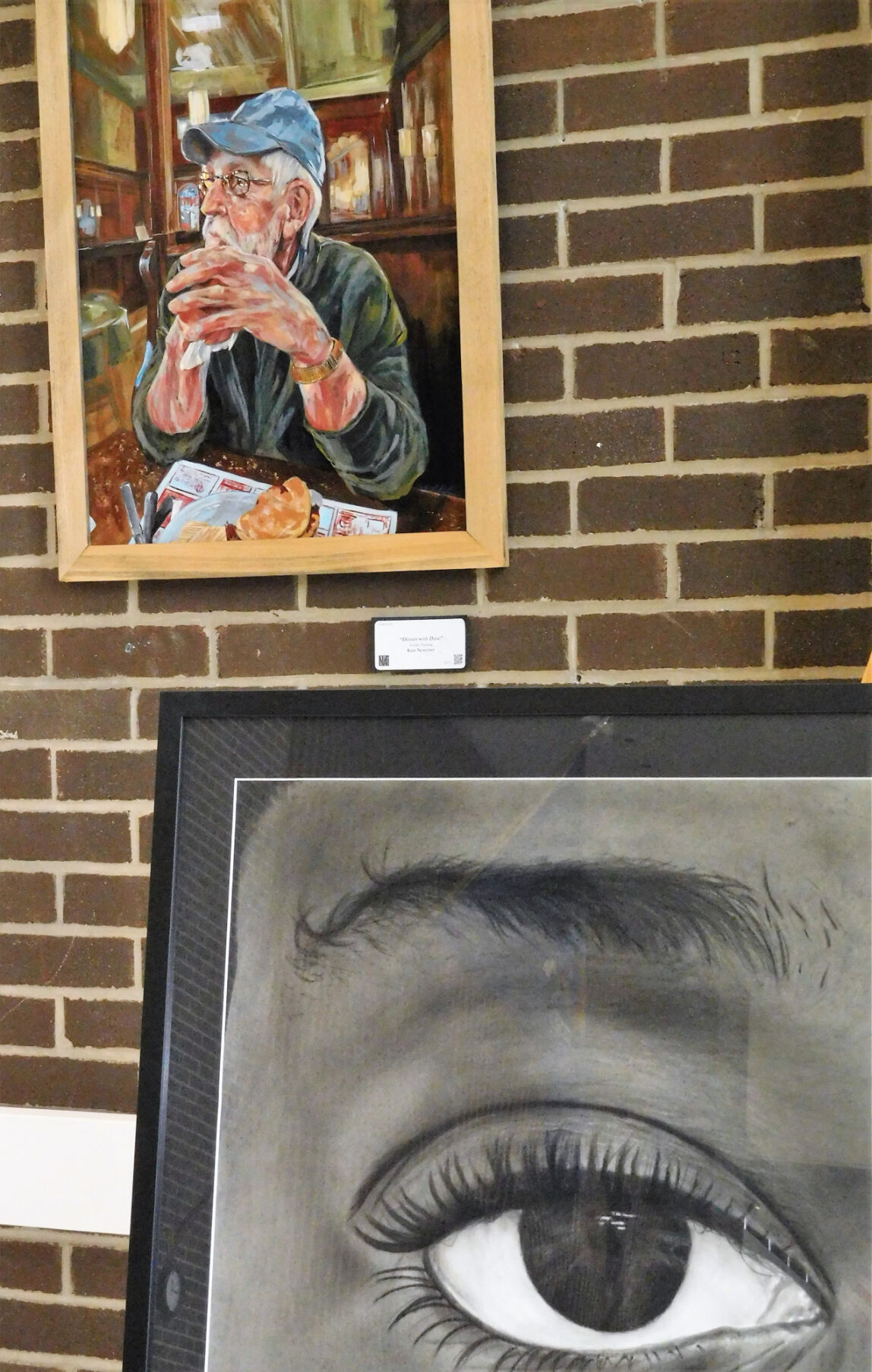 An acrylic painting by Kate Newtown, “Dinner With Dave” hangs behind one of the five drawings by Kristy Hoover at the exhibit. Chris Brock/Watertown Daily Times 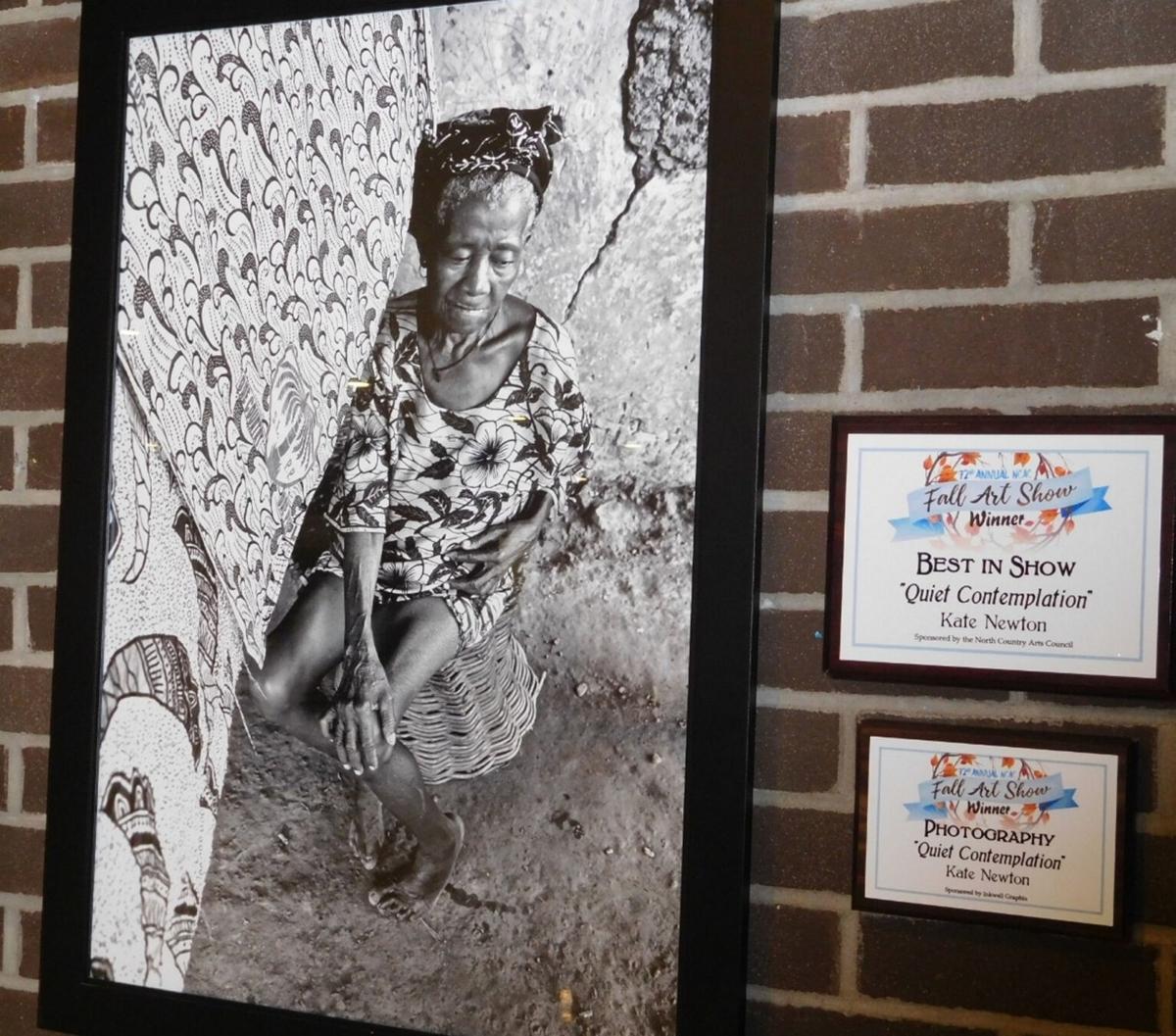 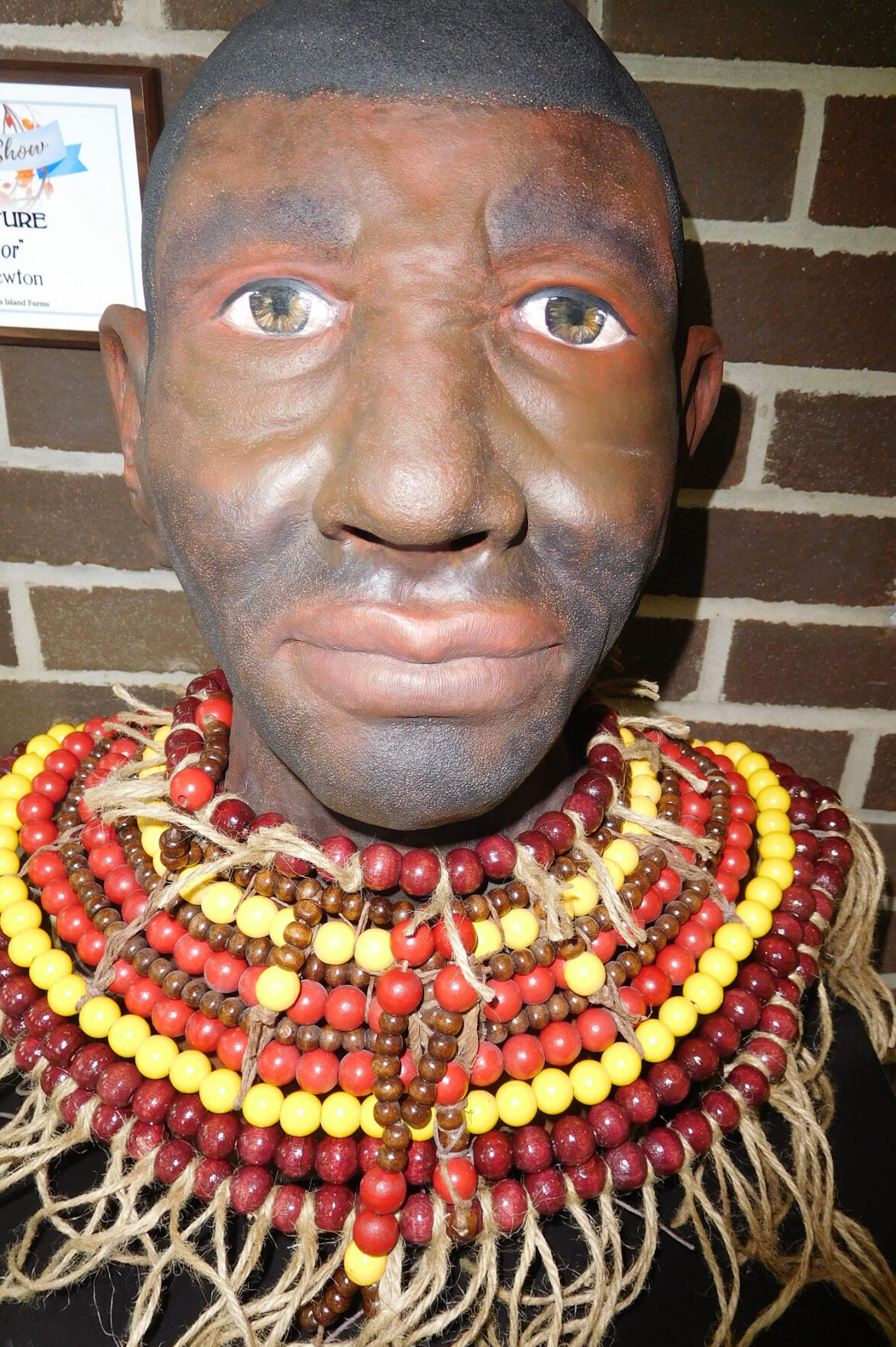 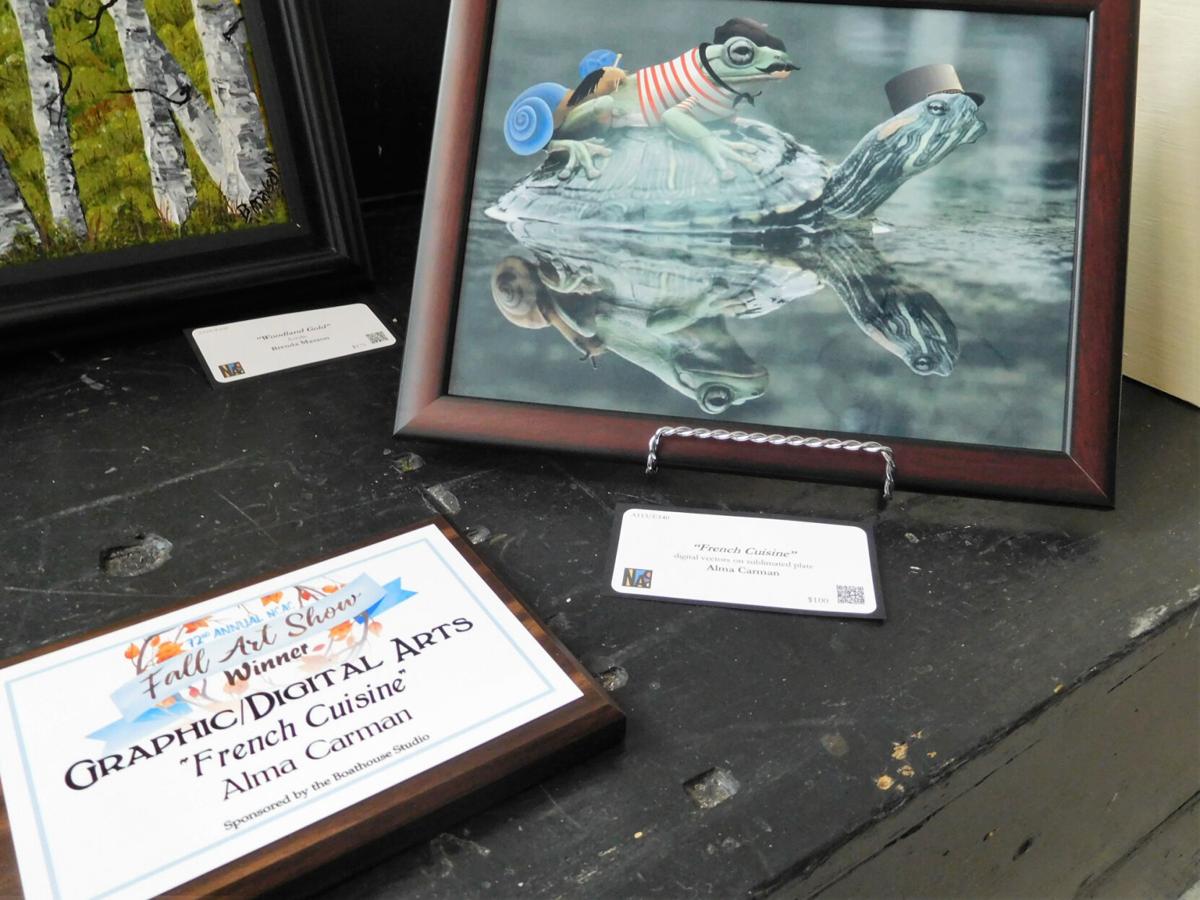 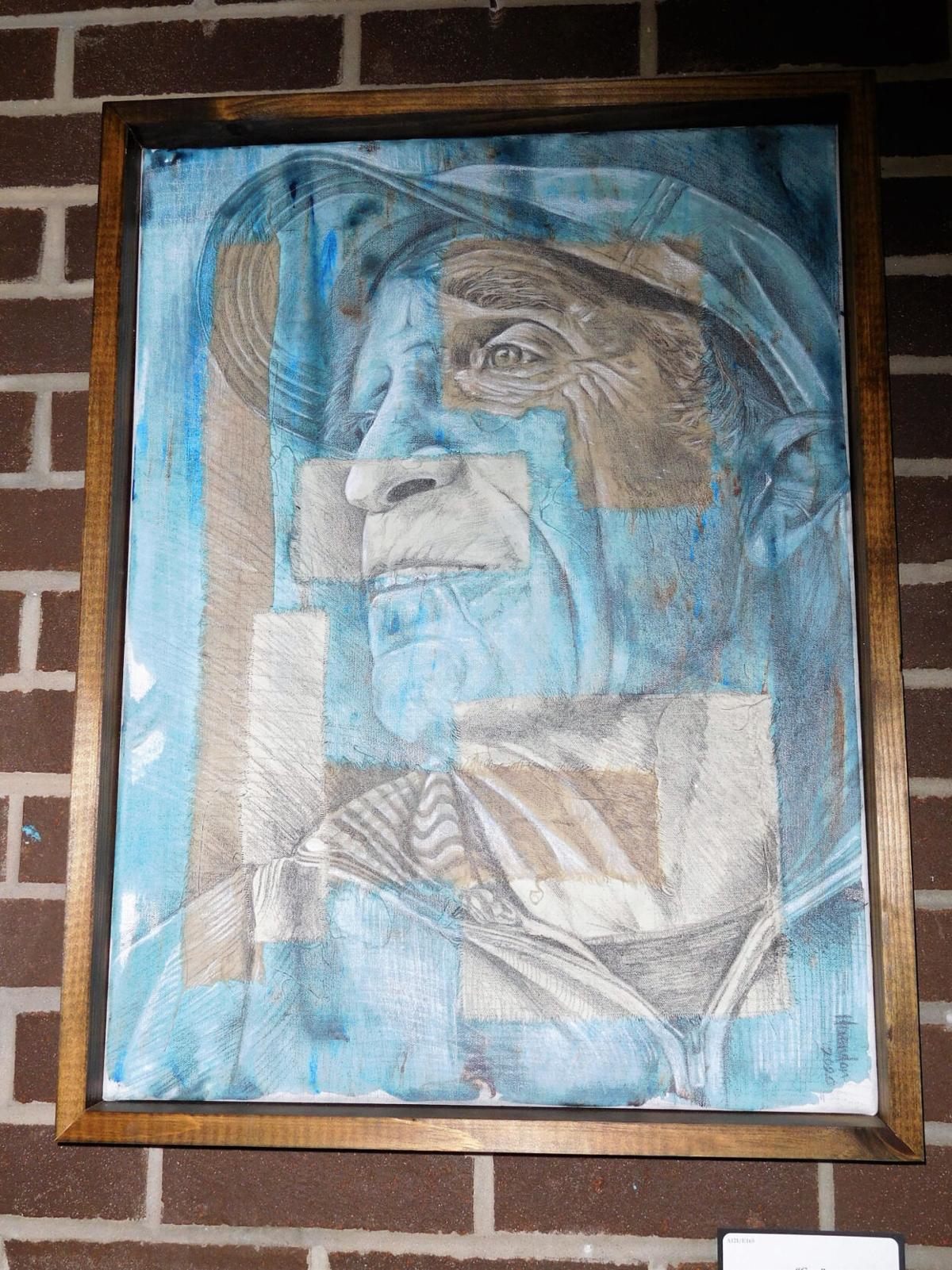 An acrylic painting by Kate Newtown, “Dinner With Dave” hangs behind one of the five drawings by Kristy Hoover at the exhibit. Chris Brock/Watertown Daily Times

WATERTOWN — Pairs of eyes in five separate frames are the first items one sees when walking into the exhibit of the 72nd annual Juried Fall Art Show of the North Country Arts Council at the Dulles State Office Building.

They are the eyes and foreheads of five distinct people, all females, and a viewer can’t help but wonder the story behind the faces, where there is no wonder, no mirth. They seem to be here simply to make a statement.

The five drawings (two graphite and three charcoal) are part of a larger body of work by artist Kristy Hoover that are intended as an installation. Ms. Hoover, an adjunct instructor at SUNY Oswego in teaching drawing 1/transfer drawing, said that when it comes to installation art, the meaning is more determined by the individual experience of the viewer within the space.

“As an artist, I wanted to create meaningful work that will be impactful on a personal, emotional level, as well as addressing social issues,” Ms. Hoover said. “The individuals whose eyes are portrayed are all survivors of sexual assault.”

The subjects behind the eyes have statements engraved into the frames of the drawings.

“Too often in our society, victims never come forward, as they are continually revictimized by the shaming and blaming that ensues,” Ms. Hoover said. “I wanted to give a voice to the survivors without them being revictimized while keeping their anonymity. The full title of each of these drawings is their statement.”

One drawing, a graphite on bristol, was selected as the R. Paul Saphier Memorial Award for top drawing. It’s titled: “It takes 7 years for each cell in our bodies to be destroyed and replaced. Today I have a body that you have not touched.” — J.

Ms. Hoover said that the full installation, and the first drawing in it, is a self-portrait and will be on display at the Rochester Contemporary Art Center (RoCo) for their members exhibition, opening Dec. 4.

“This body of work consists of an additional two large-scale figurative drawings, over 18 ceramic pieces, and so far over 30 statements made by the viewers who have been impacted personally by sexual assault,” she said. “It has been in the making for over three years now and is still growing, with three more drawings currently in the works.”

Miss Newtown is in her 16th year as a secondary art educator at Carthage Central School District and is also an adjunct instructor through the Jefferson Community College EDGE dual enrollment program.

She took “Quiet Contemplation” on her first trip to Sierra Leone in July of 2013. She traveled to the Upper Banta Chiefdom, in southern Sierra Leone with the Christian nonprofit Children of The Nations.

Her first trip was to work on the school at the base of Children of The Nations, doing tasks such as the painting of classrooms, desks and painting learning murals.

“Because of this trip, I now sponsor several children through this organization,” Miss Newtown said.

The Children of the Nation base is approximately eight hours from Freetown, Sierra Leone. “Quiet Contemplation” was taken in Mokpangumba, which Miss Newtown described as about an hour hike from the base through swamp, farmland, jungle and eventually a dug-out canoe ride across the river to the village.

Mokpangumba, Miss Newtown said, has a population of approximately 300 families, with 75% of those families women and children. The families are supported solely through subsistence farming, supplementing what they produce on their small farms with what they are able to catch in the river.

“As we were making our way through the village I would ask, with an interpreter, if I could take their picture,” Miss Newtown said. “The woman in the image was sitting in front of her house in a covered porch area with her lapas drying.”

Lapas are fabrics that come in a variety of bold colors and patterns and they are often worn as wraps, used to carry babies, laundry, food and supplies.

“She was beautiful in her own right, but the dynamic of the brightly colored fabrics she was wearing as well as the ones framing her, I loved. When I asked about taking her picture, she nodded in agreement and then looked away for the photo,” Miss Newtown said.

She was drawn to the colors and patterns originally, but as Ms. Newtown worked through her photographs, she was struck by the dynamic of the image in black and white: “With strong diagonals throughout the composition, and what felt like a tender glimpse in that moment. Life is hard there but beautiful.”

The image, Miss Newtown said, has a timeless feel in black and white, which she thinks attracted the attention of the judges in the show.

“It’s evident that it was taken somewhere else, which I think adds to the curiosity of it overall,” she said. “I also printed this photograph in a large 20-inch-by-30-inch format, further enhancing the dynamic of the piece.”

In addition to photography, Miss Newtown works in the mediums of acrylics, watercolors, graphite and ceramic. Her ceramic sculpture “Warrior” won the sculpture prize at the Juried Fall Art Show. It was a teaching example she made with an advanced ceramics class.

“This assignment took some time, but the student results were amazing,” Miss Newtown said.

Her acrylic painting at the show, “Dinner With Dave,” features a friend of the artist.

“I work with Dave on Thursday nights at Court Street Antiques for their extended hours, and then we hit up the Crystal Restaurant for dinner,” Miss Newtown said. “I wanted to take the time to capture the season and the friendship. Dave does refinishing work, and has done a lot of refinishing at the Crystal over the years.”

She has a couple of other pieces in the show:

“Eyes Wide Open,” a color pencil self-portrait and the graphite/watercolor “Patterns of Grace,” derived from another photo she had taken in Sierra Leone.

The winners from the 72nd annual Juried Fall Art Show of the North Country Arts Council: