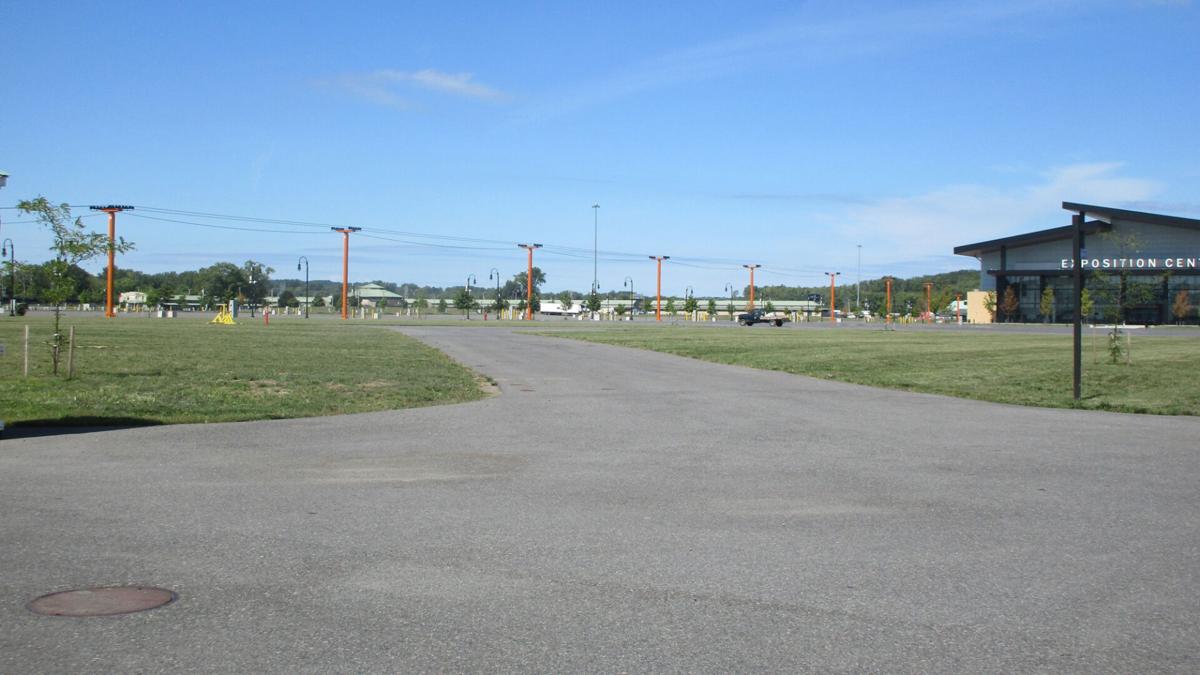 The emptiness of the fairgrounds near the Expo Center on Aug. 20 — the day before the fair would have opened. Debra Groom photo 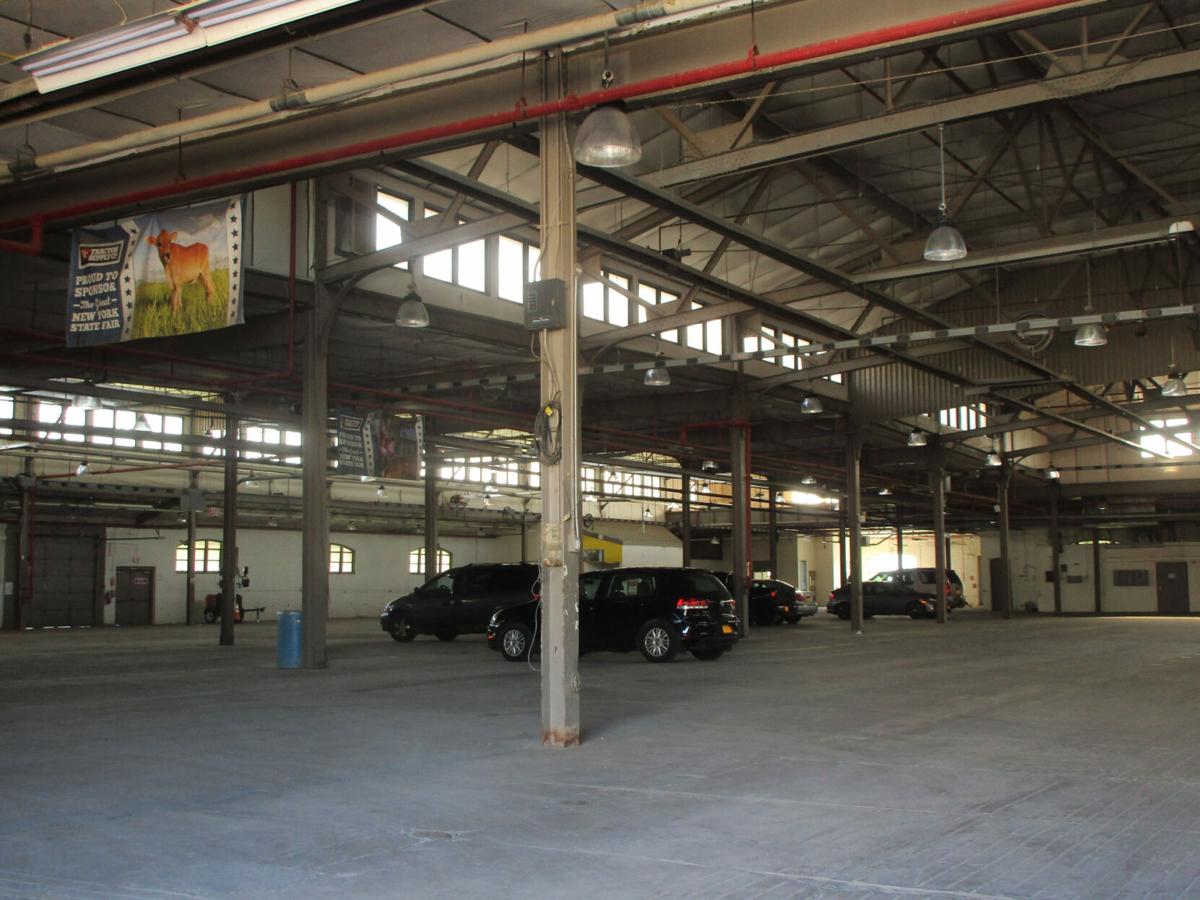 The inside of the Dairy Cattle Building on Aug. 20. Normally, this area would be filled with dairy cattle of various breeds brought in for shows during the fair. Debra Groom photo 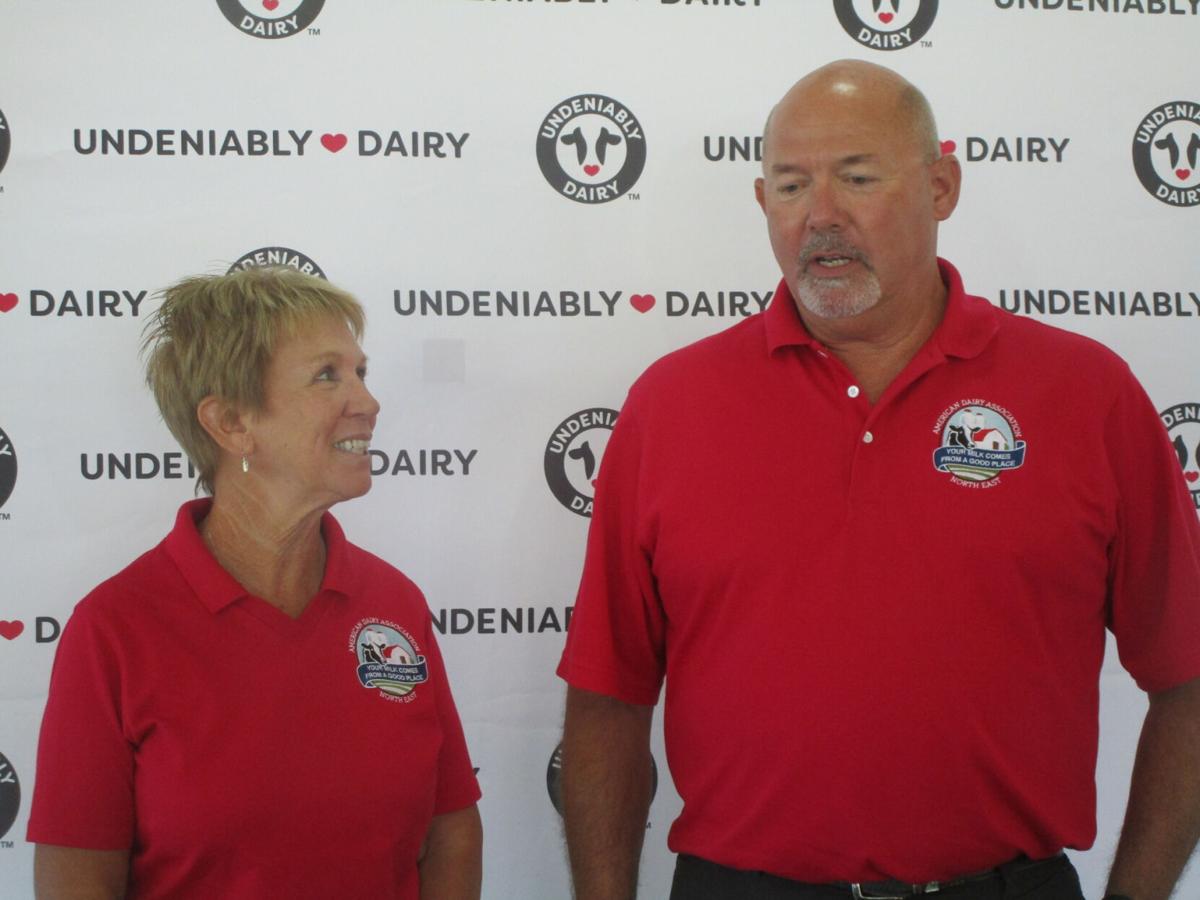 Peggy and Lynn Murray, of Murcrest Farm in the town of Champion, talk about the virtual butter sculpture during a press event at the fairgrounds Aug. 20. Debra Groom photo

The emptiness of the fairgrounds near the Expo Center on Aug. 20 — the day before the fair would have opened. Debra Groom photo

The inside of the Dairy Cattle Building on Aug. 20. Normally, this area would be filled with dairy cattle of various breeds brought in for shows during the fair. Debra Groom photo

Peggy and Lynn Murray, of Murcrest Farm in the town of Champion, talk about the virtual butter sculpture during a press event at the fairgrounds Aug. 20. Debra Groom photo

The crowds of happy fairgoers are missing. The jubilant cheers of people winning Midway prizes are absent. The laughter of children as they fly up and down on rides is gone. The wonderful smells of sausage, chicken and beef are nowhere to be found. And the glorious sounds of New York — mooing, oinking, neighing and cock-a-doodle-doing — are a memory.

The cancellation of the New York State Fair due to COVID-19 has left a hole in the hearts of many across the state. Farmers, vendors, 4-Hers, FFA members, exhibitors and fairgoers all are missing out on one of the — if not the — highlight of the summer.

During a recent stop at the fairgrounds, visitors saw just how lonely the place can be. It was Aug. 20, the day before the fair would have opened. The first-ever 18-day fair was set for Aug. 21-Labor Day. This is the second time the fair has been canceled — the first time was from 1942-47 during World War II. The fairgrounds actually was a military base during the war.

Normally this day before the fair opens is a rush of humanity and activity. Final touches being placed on booths. Animals being unloaded and given baths to ready them for shows. Building superintendents, vendors and others filing in and out of the administration building trying to fix problems and ask questions.

Aug. 20 — pretty much nothing. A few trucks driving around, but that’s about it.

Oh, there was a press event at the pavilion behind Chevy Court. The American Dairy Association North East announced it was sponsoring a virtual butter sculpture. More about that later.

While the New York State Fair is 18 days of fun and trying to keep the waistline in check, it also is a special time for agriculture. The fair began back in 1841 as a way for farmers and producers across the state to show off their animals and crops so all of us would see the bounty of the Empire State.

It also is a time for these farmers and producers to explain what they do to the non-agriculture people living in the state. It’s an educational venue and those in the agricultural field love nothing more to answer questions and show non-ag people what they do.

That’s all being lost this year.

Some agriculture organizations are trying to keep their little bit of the fair alive virtually.

The Dairy Cow Birthing Center is always a highlight of the fair. People crowd the bleachers three times a day to see the miracle of life — a dairy calf being born.

Eileen Jensen, executive director of the New York Animal Agriculture Coalition which puts on the birthing center, said this year will feature a traveling birthing center, dubbed “Dairy on the Moo-ve,” and can be viewed every day on the Ag Coalition’s social media channels.

“’Dairy on the Moo-ve’ aims to showcase modern dairy farming, including the birth of calves, what it’s like to be a dairy cow, the many jobs on the farm and the technology that helps dairy farms produce nutrition and delicious milk every day,” Jensen said.

The traveling birthing center will include videos and content posted to the Ag Coalition’s social media, including live streams from birthing barns at each farm stop over the next eight weeks.

The first stop was at Venture Farms in Tully, Onondaga County, last week.

Sculptors Marie Pelton and Jim Victor from Conshohocken, Pa., began work on the sculpture last week and it takes about 10 days for it to be completed. They use 800 pounds of New York state butter to make their masterpiece.

“The fair and the butter sculpture mean so much to the people of New York,” said State Fair Director Troy Waffner. “The cancellation of the fair is such a loss for people. They will miss the animals, the rides and the food. For the fair workers, it’s a loss of morale. Onondaga County officials would say there’s the loss of tax revenue.”

“We know how much the fair means to New Yorkers and while we’re busy planning the greatest fair in our history for 2021, we are grateful to our longtime partners at American Dairy Association North East for creating an important part of the fair in a difficult year,” Waffner said.

Peggy and Lynn Murray, who run Murcrest Farm in the town of Champion on the border of Jefferson and Lewis counties in the North Country, said New Yorkers are going to miss all the fun aspects of the fair such as rides, food and games. But they also will miss the joy of seeing farm animals up close and personal and learning about how they are raised by the farmers.

“People love to see the cattle, goats, sheep,” said Lynn Murray, who with his wife and son Mark milk 1,200 Holsteins on their farm. “So many people make a point of visiting year after year.”

Peggy Murray, who is retired from Cooperative Extension of Jefferson County, said the butter sculpture always is a big draw at the fair. She said whenever she would enter the Dairy Products Building during the fair, she would see people lined up to take their photos in front of the sculpture.

“The dairy association is doing a good a job putting this on virtually so people can still see it,” Peggy Murray said. “But it’s sad. They are doing a good job, but it’s not the same.”

After the fair ends on Labor Day, the butter sculpture is deconstructed — usually by Cooperative Extension Master Gardeners — and the butter is taken to a local dairy farm where it is recycled in a methane digester to create electricity. It cannot be used for eating because it is considered “scrap butter.”

10 a.m. Aug. 31 — This will be Virtual New York State Dairy Princess Day. The state Dairy Princess and princesses from counties across the state will demonstrate how to make ice cream at home and will announce the winner of the milkshake contest.

10 a.m. Sept. 1 — Unveiling of the butter sculpture. There is no live cam at the sculpture so it can be seen during the unveiling and through still photos on the dairy association Facebook page throughout the fair.