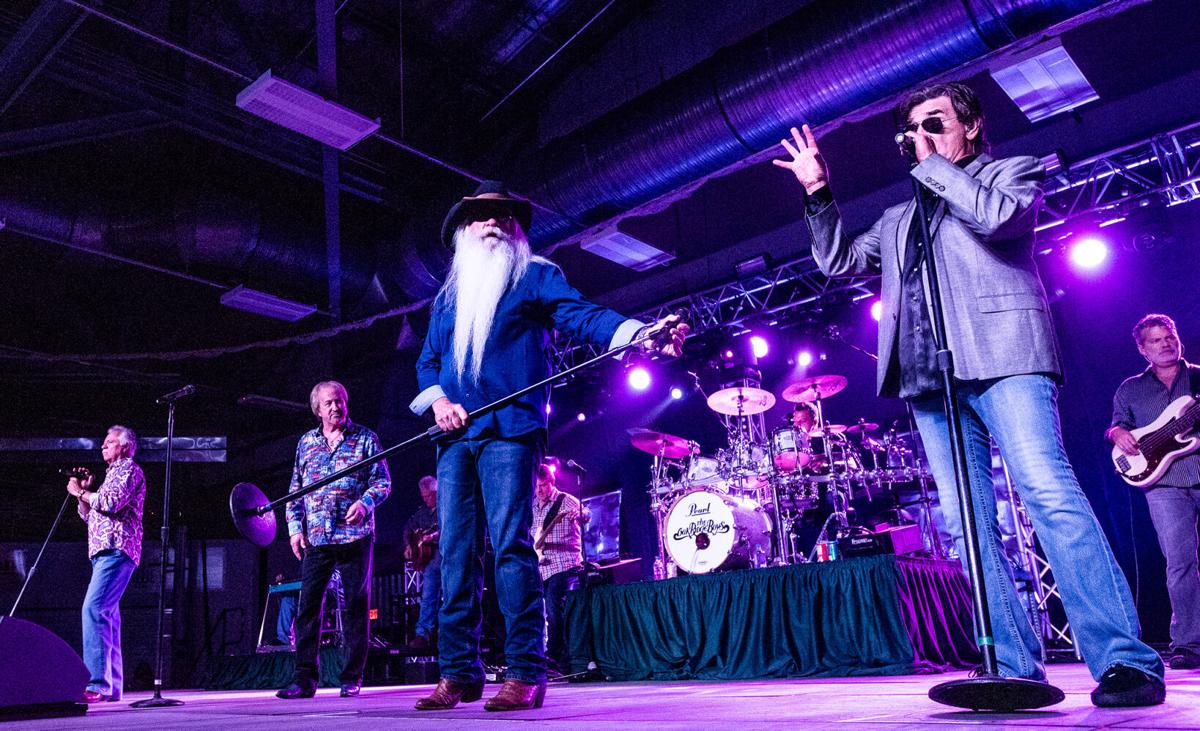 LOWVILLE — If you hear the beginning of the song, “Elvira” by the Oak Ridge Boys, your mind might jump directly to the “Giddyup” followed by a deeper than deep voice intoning, “Oom poppa oom poppa mow mow.”

And if that happens, you may have the depths of Richard Sterban’s voice weaving through your mind for the rest of the day.

On Friday at 7:30 p.m., the Lewis County Fair Grandstand will host the Oaks, including Mr. Sterban and his iconic bass voice, fusing the celebration of the 200th Fair with that of “Elvira’s” 40th anniversary, and this is just the beginning for that celebration.

“The good Lord willing, from August until the end of the year we’re going to be traveling all over the country celebrating 40 years of ‘Elvira,’” Mr. Sterban said.

He is also happy to be returning to the north country, noting is a beautiful part of the country and that it brings back memories of the years he spent living in Binghamton. The return also makes him happy because the Oaks’ tour drummer who was born and raised in Gouverneur, Austin W. Curcuruto, 37, is “so excited. It’s like a homecoming for him,” Mr. Sterban said.

Mr. Curcuruto lives in Nashville with his wife Deirdre and his daughter Gianna and has been playing with the Oaks since 2017.

Like for many, the COVID-19 pandemic shut down the music world from recording studios to live shows. The performers, support musicians, roadies, security guards, bus drivers and multitudes of other people that make those shows happen were all out of work.

And, Mr. Sterban said, like for so many people around the world in all walks of life, it was hard.

But this summer the Oak Ridge Boys including Mr. Sterban, Duane Allen, Joe Bonsall and William Lee Golden have reasons to celebrate.

With the spread of COVID-19 slowing and restrictions lifting, they have been able make a living again doing what they love best along with their team, crew and musicians — making music — both in the studio and hitting the road again for a tour.

The new Oak Ridge Boys album released in June, “Front Porch Singin’,” is unmistakably the antidote to so much of the mental stress people have been experiencing for the past year and half.

Featuring a cover of Keb Mo’s “Life is Beautiful,” gospel classics like “Swing Down Chariot,” old country songs including “Red River Barn” along with a number of new songs with titles that alone give comfort in trying times, like “Love, Light and Healing,” what started out as just another album evolved into a work focused on helping listeners with emotional fall-out from the pandemic.

“The theme developed on its own as we were working on the project. Every song really has a very inspirational message to it,” Mr. Sterban said, “And I think we ended up cutting an album that I think is very appropriate for the times in which we live. Everyone’s come through difficult times and I think we need to hear a positive message right now and a very inspirational message, a very healing message. I think music is healing anyway and I think we were able to cut an album that is very healing in nature, so we’re very proud of it.”

Mr. Curcuruto agrees with Mr. Sterban on the impact of the new album as he watches the crowds respond to the music.

“It moves people and it moves me through them. Love, light and healing is exactly what we all need right now,” Mr. Curcuruto said. “You watch these hard guys sitting up in the front row with tears rolling right down their cheek. You know you’ve touched their heart... that’s so incredible. I’ve had the modern country experience and it’s all sun dresses and red solo cups and that’s cool but to move people... that’s a big, big deal and very special.”

It’s not just the more emotional music that helps the crowds heal.

“Even ‘Elvira’ is healing,” said Mr. Sterban. “You cannot listen to ‘Elvira’ without smiling. Even here 40 years later, when we hit the intro to ‘Elvira,’ people still go crazy out in the audience. They stand up. They start singing along. They start dancing in a lot of cases. For however long ‘Elvira’ lasts, you take people away from their cares and their worries.”

Mr. Curcuruto said that “Elvira” is always one of the high points of the shows and agrees with Mr. Sterban that it takes people to a new energetic level.

“The show has energy ... we take ‘em up and down. We give them some happy songs then we give them some downer songs to make them reflect on things. Then ‘Elvira’ comes in and the roof just blows off. It doesn’t matter where we are or the demographic. It’s just unreal,” he said, “I mean, here I am, a poor boy from Gouverneur that had nothing but a drum set and now I get to play ‘Elvira’ with the Oak Ridge Boys.”

He notes that the song “came into the world” before he did.

“The thing about Austin that’s so cool,” Mr. Sterban said, “is that most of the hit songs he’s playing on were hits before he was born. He’s keeping us youthful, he really is.”

Meanwhile, the drummer is in awe of the four men in their 70s and 80s that are the Oak Ridge Boys, their constant and inspiring energy and enthusiasm and the extreme trust they put in him to deliver the quality of music without micromanaging.

Even after four years of playing with the band, he describes the experience as “completely surreal” giving a “euphoric buzz.”

Musically and technically, Mr. Curcuruto said that knowing “Elvira” and the Oaks’ other biggest hits only gives the smallest hint of how much material is in their catalog of songs to draw on for the tour and how diverse everything from the production to music styling trends and recording styles that have changed constantly come into play in a body of music made over decades.

“All national gigs that I’ve had were 14, 15 songs. You played the same songs every single night and you didn’t really have to think about too much six months or so into the gig. I took on the Oaks gig and I had to learn 55 songs,” Mr. Curcuruto said.

“Musically speaking, as a player, this gig is more fulfilling than any I’ve ever had as far as staying up on my chops and being a real strong player the Oaks gig shocks anybody that doesn’t know what it’s about.”

Coming home to the north country, Mr. Curcuruto brought some friends from Nashville to show them the beauty of the area he’s been talking about for years. He said he’s taken them everywhere he can think of, but the last thing he may do is go bass fishing, his “other” love besides his wife, his daughter and his music.

Over the past four years of touring with the Oaks, the biggest challenge has been to find a way to balance his touring life with his family life.

“She’s grown up on a bus,” he said of Gianna, but he noted he will eventually want to transition to a studio musician so he can spend more time being a dad.

But for now, Mr. Curcuruto will support Mr. Sterban and the other Oaks on the skins and celebrate “Elvira,” a song that was written with inspiration from a street sign in East Nashville on Elvira Street by Dallas Frasier.

He pulled over when he saw the sign, Mr. Sterban said, and wrote, “‘Elvira, Elvira, my hearts on fire for Elvira.’ Then, right there he wrote the, ‘Giddyup oom poppa mow mow’ part. The way he tells the story, he wrote the oom poppa mow mow part to imitate or mimic the bumps on the road. Evidently Elvira Street had pot holes... Of course when he got home, he wrote versus about a woman so the song would make sense.”

Bumps in the road led to a megahit that holds up 40 years later. Mr. Sterban said at the Lewis County Fair, fans will definitely hear his deep voice sing the bumps. Giddyup.

Tickets to the Oak Ridge Boys concert can be purchased online at lewiscountyfair.org.