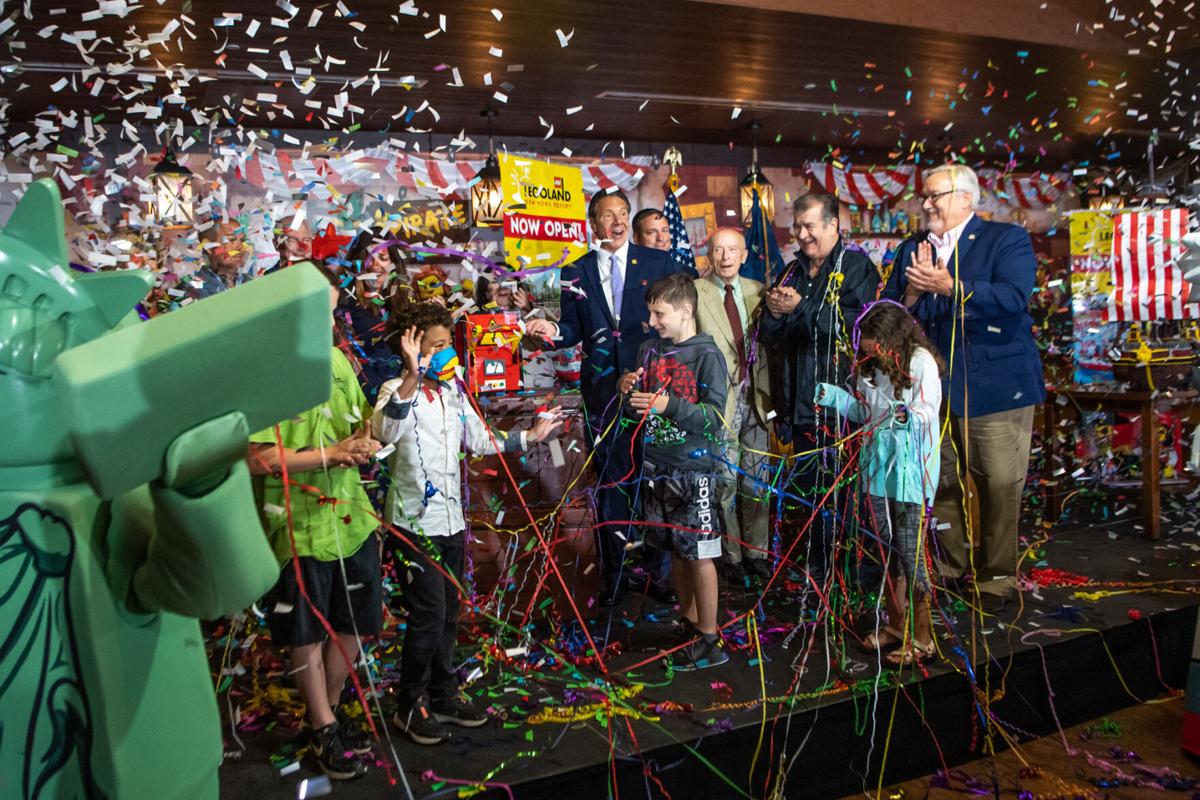 Cannons of confetti burst open in celebration July 9 after Gov. Andrew Cuomo cut the ribbon to officially open LEGOLAND in Goshen, Orange County, while LEGO Movie theme “Everything is AWESOME!!!” blared in the background. Courtesy of Gov. Andrew Cuomo’s office 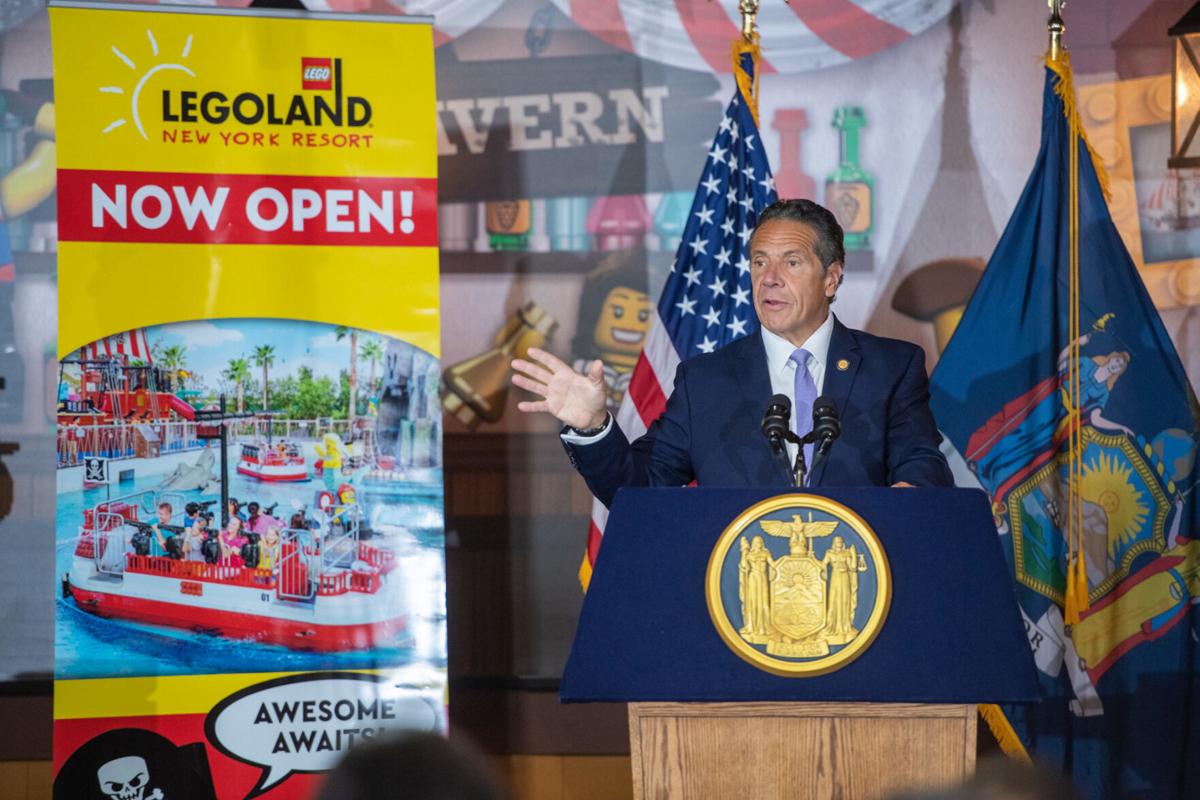 Cannons of confetti burst open in celebration July 9 after Gov. Andrew Cuomo cut the ribbon to officially open LEGOLAND in Goshen, Orange County, while LEGO Movie theme “Everything is AWESOME!!!” blared in the background. Courtesy of Gov. Andrew Cuomo’s office

GOSHEN — The LEGOLAND® New York Resort in Orange County opened with fanfare this month as the first Northeastern theme park to open in 40 years, expected to help the Hudson Valley’s regional economic recovery after the fallout caused by COVID-19.

The $400 million facility at 1 LEGOLAND Blvd. in Goshen features 50 rides and attractions on 520 acres. The resort includes a 250-room hotel.

“A major economic driver for this state is tourism,” Gov. Andrew Cuomo said at LEGOLAND’s grand opening Friday morning. “LEGOLAND is going to be a magnet — an attraction for a magnificent part of the state that has been unrealized to date.”

More tourists of all ages will be drawn to visit upstate because of the new theme park, the governor said, adding families may also visit other Hudson Valley attractions such as the Walkway Over the Hudson, the Storm King Art Center, Bethel Woods, Hudson River School landscapes and artist sites and other features of the Hudson River.

“And that’s what LEGOLAND is going to do,” Cuomo continued. “Yes, the economics and the jobs of LEGOLAND itself, but bringing people to see everything else that we have here. It is going to be an economic engine for the entire region, and that’s why we are so excited about it.”

Cannons of confetti burst open immediately as Cuomo and LEGOLAND® Divisional Director Stephanie Johnson cut the ribbon Friday to officially open the park. Children wearing face masks and danced as the theme song from the LEGO® Movie “Everything is AWESOME!!!” blared in the background.

Founded in 1968, LEGOLAND® Parks, based in Denmark, has 10 theme parks across the globe, including in Florida and California, and internationally in the United Kingdom, Germany, Japan, Dubai, Malaysia and Korea. The company also owns a host of discovery centers and waterparks across the United States and other continents.

“We appreciate the support of New York state and Empire State Development as LEGOLAND® New York Resort prepares to welcome guests from far and wide to build unforgettable memories this summer,” Johnson said. “We aim to be a child’s first theme park experience, and we’ve always seen the Hudson Valley as the perfect fit for LEGOLAND® New York Resort, not only for its picturesque setting, but its proximity to the largest tourist market in the world.”

Johnson was first to speak at Friday’s grand opening.

“After the challenges of the past year, we are pleased to see signs that people are ready to travel again, and we’re proud to play a part in the rebirth of New York’s crucial tourism economy,” she added.

The state invested more than $40 million in new road and bridge infrastructure to enhance capacity and improve reliability, including the reconfiguration of the Route 17 Exit 125 interchange, construction of a new bridge over Route 17, widening the South Street and Route 17M intersection and the reconstruction of Harriman Drive, according to the governor’s office.

“The Mid-Hudson Regional Economic Development Council is proud to have supported this project and eagerly welcomes the Northeast’s first LEGOLAND® park to our great region,” SUNY New Paltz President and Mid-Hudson REDC Co-Chair Donald Christian said. “For a decade, the REDC has been cultivating the Mid-Hudson region as a top destination for visitors and a great place for residents and businesses. Merlin Entertainment recognized this, and our positive, productive partnership will yield job opportunities, infrastructure improvements, and economic development locally and across the region.”

The new theme park will also bring significant community benefits to the town of Goshen in Orange County. LEGOLAND® New York will pay the town a host community fee based on attendance of at least $520,000 the first year and increasing each year thereafter for 30 years, with no cap on payments. The park will also host two community Days for the Town per year, donating 50% of event ticket sales to the town.

“Orange County is proud to welcome LEGOLAND® New York, which joins other attractions that make the county a destination for tourists from around the world,” Orange County Executive Steven Neuhaus said in a statement Friday. “We had a great opportunity to bring LEGOLAND® to Orange County and it will be a major economic draw for the region. Not to mention, it has made a lot of young children in the area very happy.”