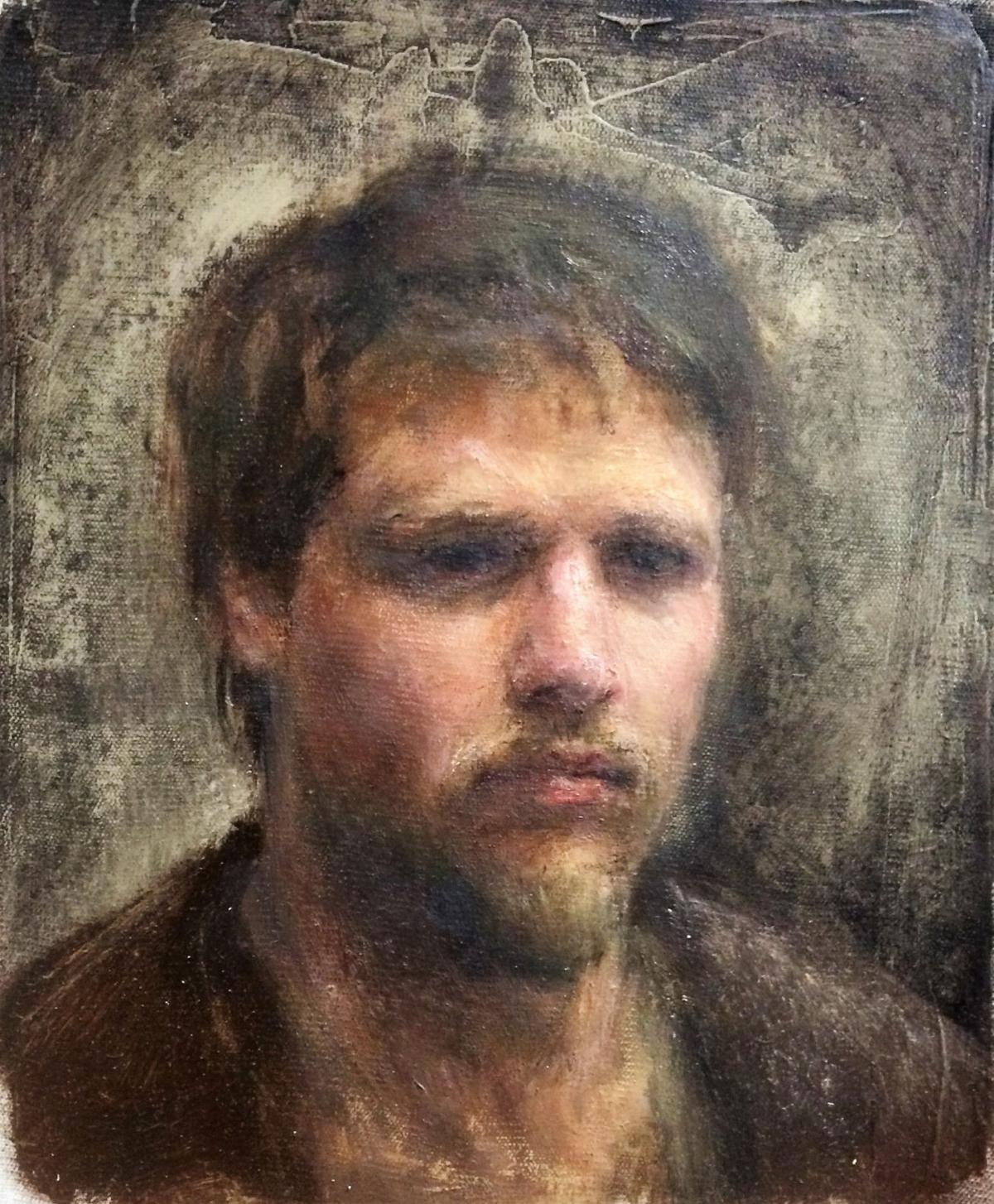 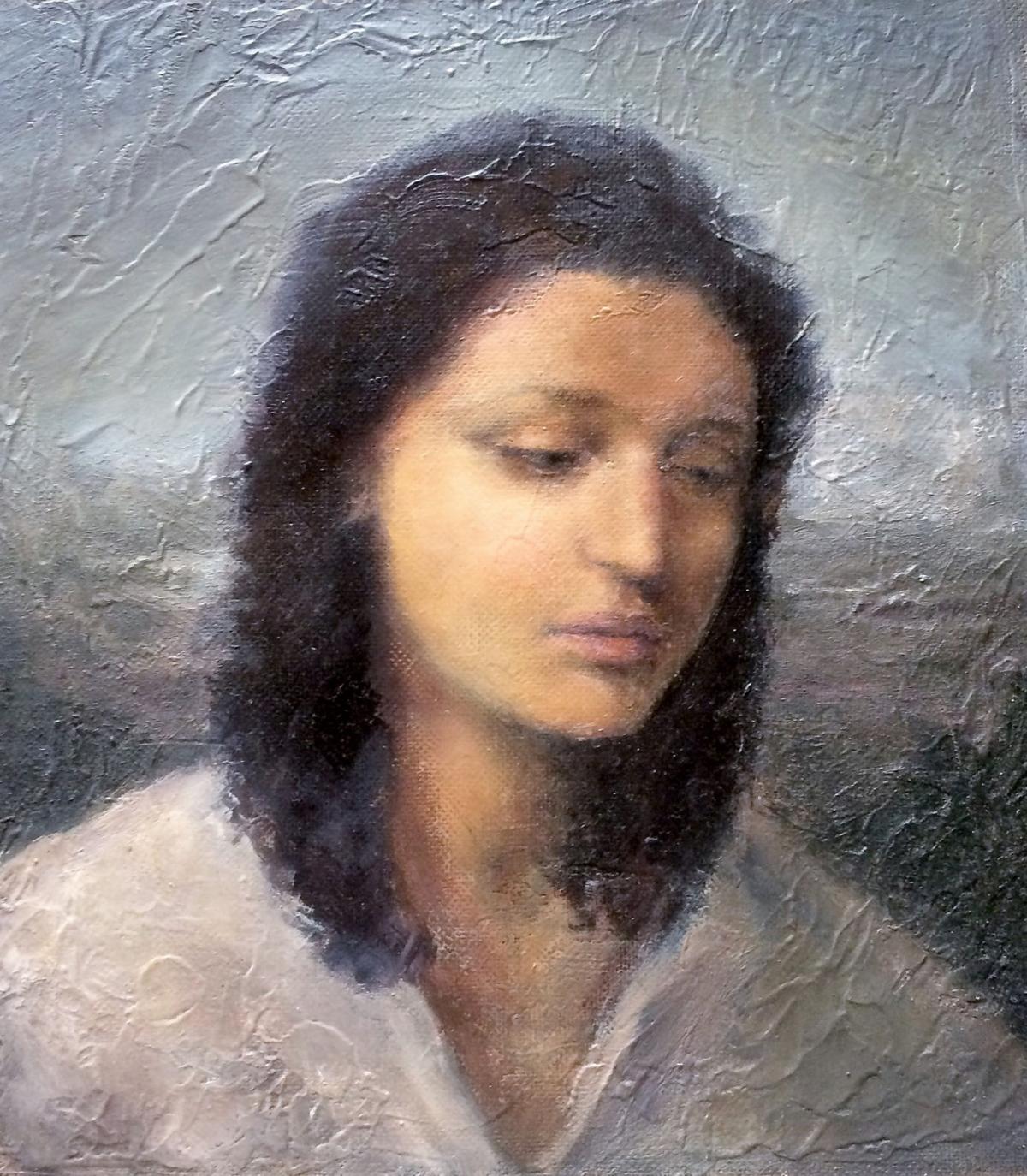 This painting by Andrew Aviste is titled, “Lost” — “as she is lay in thought in a landscape that is almost completely dissolved in a hazy darkness.” Andrew Aviste 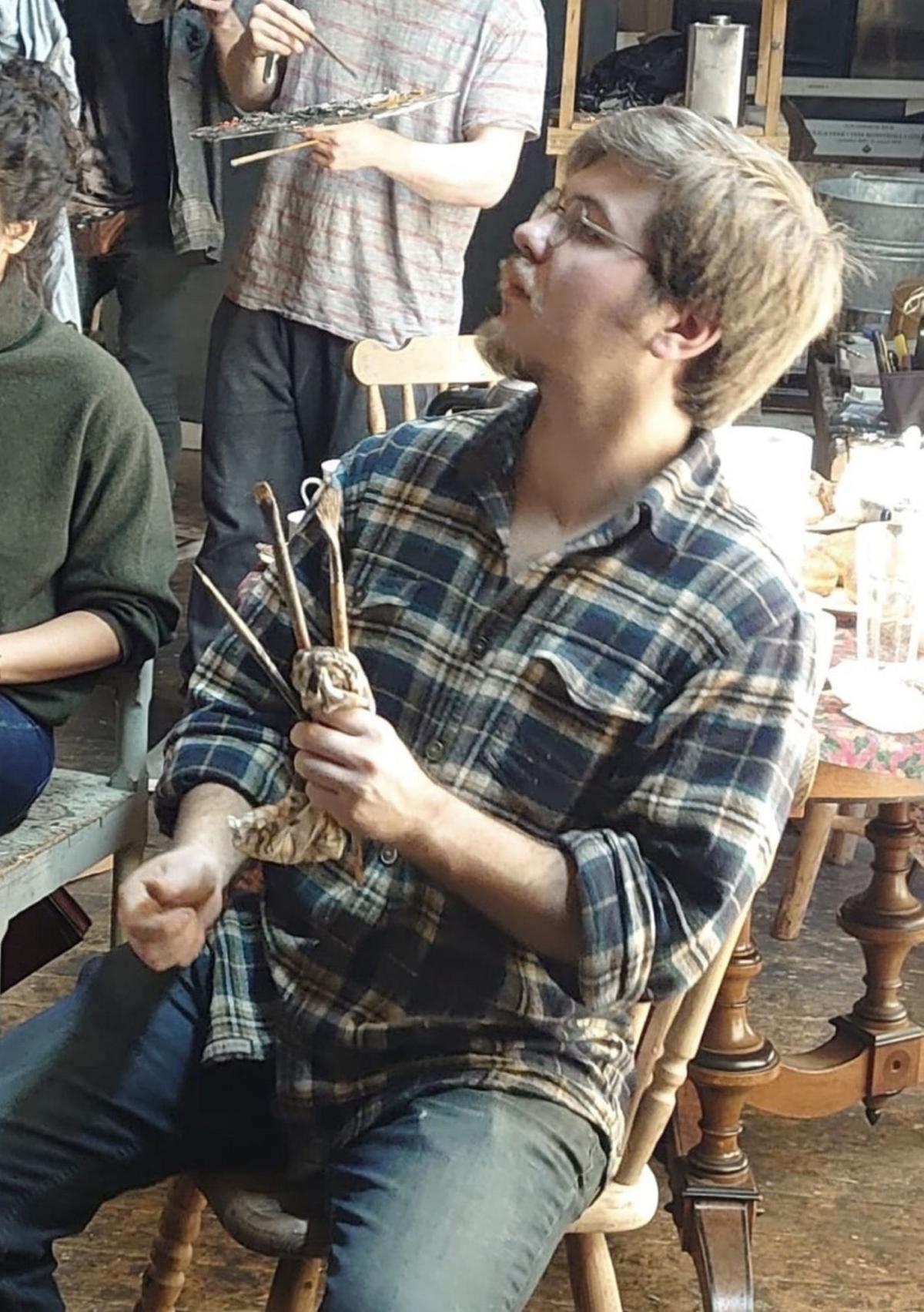 Andrew Aviste at work as an apprentice under Odd Nerdrum. Courtesy A. Aviste 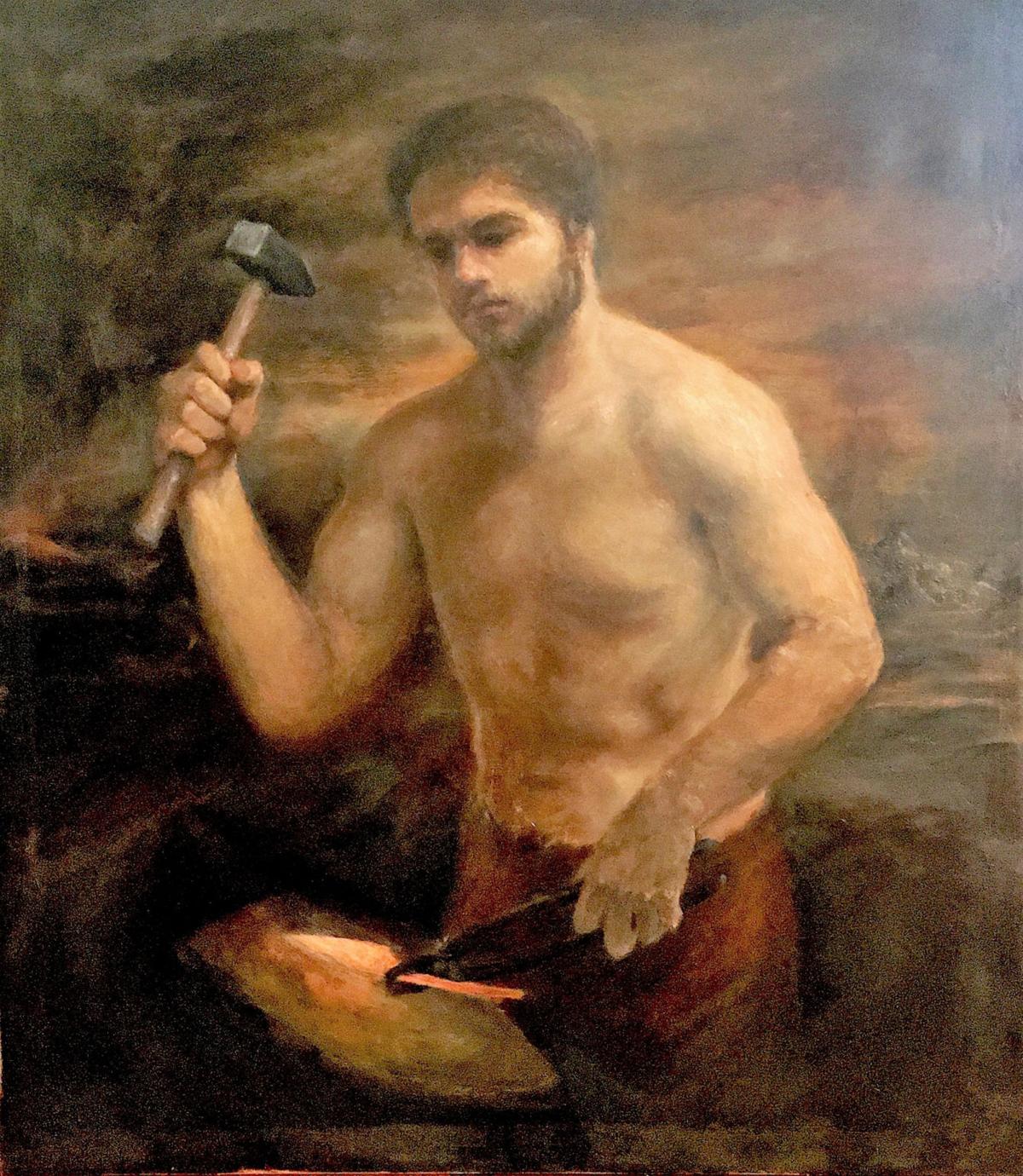 This self-portrait by Andrew Aviste as a blacksmith is titled “Hephaestus” after the Greek god of craftsmanship. Mr. Aviste has been painting in oils since 2017. Andrew Aviste

This painting by Andrew Aviste is titled, “Lost” — “as she is lay in thought in a landscape that is almost completely dissolved in a hazy darkness.” Andrew Aviste

Andrew Aviste at work as an apprentice under Odd Nerdrum. Courtesy A. Aviste

This self-portrait by Andrew Aviste as a blacksmith is titled “Hephaestus” after the Greek god of craftsmanship. Mr. Aviste has been painting in oils since 2017. Andrew Aviste

A Black River native has been in Sweden and Norway since August, serving as an apprentice to someone many people consider to be the greatest classical figurative painter alive.

Odd Nerdrum, 75, according to his bio on artsy.net, is inspired by the “old masters,” including Rembrandt and Caravaggio. The “old master” term applies to a distinguished painter or a work of the period from 1500 to 1700.

Andrew Aviste, a 2011 graduate of Carthage Central School District, also studied with Mr. Nerdrum for two months in 2017. His completed his latest lessons with the painter on Saturday. He’ll return to the U.S. two days from now.

According to the artsy bio on Mr. Nerdrum, “His painting is a rejection of modern art, with bizarre narratives and apocalyptic visions — likened to the work of his Norwegian forbear Edvard Munch—capturing the horrors of the 20th century in a highly figurative manner.”

Mr. Nerdrum has said his work is kitsch, not art. That philosophy and his 2000 book/manifesto, “On Kitsch” launched a movement.

The web site World Wide Kitsch says the antithesis of kitsch is art. The site goes into great detail on its development, but notes “the designation of painters and sculptors as ‘artisans’ emerged in the 1750s, following the advancement of an exclusive group of ‘self-important fellows.’”

The “Kitsch movement incorporates “the techniques of the old masters with narrative, romanticism, and emotionally charged imagery,” according to its Wikipedia page. “The movement defines kitsch as synonymous with the arts of ancient Rome or the techne of ancient Greece. Kitsch painters embrace kitsch as a positive term not in opposition to ‘art,’ but as its own independent superstructure.”

Indeed, the Facebook page of “World Wide Kitsch” calls it a badge of honor as it goes against “The art establishment.” It’s a philosophical movement separate from art.

Mr. Nerdrum’s paintings are in collections around the world, including in the U.S. at such places as the Metropolitan Museum of Art in New York City, the Walker Art Center in Minneapolis, the de Young Museum in San Francisco and the Hirshhorn Museum and Sculpture Garden in Washington, D.C.

Mr. Aviste, son of John and Evelyn Aviste, Black River, is one of a select group of oil painters from around the world chosen to apprentice under Mr. Nerdrum.

In response to emailed questions, Mr. Aviste, in written responses, first wanted it to be known that he doesn’t consider himself an artist.

“I do not create art,” he wrote. “I am a kitsch painter or just a painter.”

Mr. Aviste plans to return to Sweden by the end of the year to again study with Mr. Nerdrum. He said there are anywhere between one to 10 student apprentices at a time and all of them live with Mr. Nerdrum’s family.

“It really creates an interesting dynamic,” Mr. Aviste said. “We don’t have classes per se, but being completely immersed in painting and studio life as well as philosophy makes drastic improvement inevitable. The year is split between the studios in Stavern, Norway and Helsingborg, Sweden.”

Mr. Aviste started drawing around the age of 3 or 4.

“I just never stopped,” he said.

He enjoyed looking through books his father had on Leonardo da Vinci and Michelangelo.

“I remember around the age of 10 that it really stuck me how amazing these works actually were,” Mr. Aviste said. “Here, paint and stone has been turned into soft, luminous flesh. At the time, I thought, ‘I want to be able to do that.’ So I kept drawing.’”

Mr. Aviste began to attract the public’s attention in middle school and high school as the best drawings in his classes were entered for inter-school competitions and he received awards.

Robert Renaud, Andrew’s art teacher at Carthage, said that many times he can tell right away during a student’s freshman year that he or she will pursue art as a career.

“Andrew was a different case,” said Mr. Renaud, who will retire this year after 32 years at Carthage. “He was interested in so many things that I don’t think even he was sure what avenues he wanted to explore and pursue. But one thing that made Andrew stand out was his constant inquisitiveness. He didn’t just want to complete assigned projects, he always wanted to investigate more than the objectives I laid out.”

The veteran teacher isn’t surprised at his former student’s success.

“He never seemed to just except the status quo,” Mr. Renaud said. “He always pushed forward to see what more exciting and interesting things could done.”

Mr. Aviste said it didn’t cross his mind to make a career out of his art skills until about three years out of high school.

When he graduated from Carthage High School, he intended to become a luthier — someone who builds stringed instruments. He moved to Toronto.

“But it didn’t take me long to realize it was more of a passing interest,” he said of his luthier aspirations. “Now, here I was back to square one. What was I going to do with my life?”

He realized he had been drawing for longer than anything else in his life and he could translate that passion into painting. At first, it was discouraging for him.

“I wanted to paint like the old masters,” he said. “But every art school I went to taught you how to be creative, not how to paint. I watched documentaries and looked at galleries. The old masters were dead, nobody could paint like them anymore. I even made some modernistic art, but it just felt wrong, and it made me bitter.”

He then discovered Odd Nerdrum.

“It was in a YouTube video where he was in a debate with the British philosopher Roger Scruton (1944-Jan. 12., 2020) on the values of art and kitsch,” Mr. Aviste said. “After doing some research on Odd, I discovered that he took on apprentices free of charge.”

He wrote a letter and made a self-portrait, the standard application to study with the master, and was accepted.

There are many elements that attracted Mr. Aviste to the creations of Mr. Nerdrum; the skill displayed the most obvious.

“When you stand in front of his paintings, the figures aren’t just realistic or photographic, they are alive,” Mr. Aviste said. “There is a solidness and texture that makes you believe it would be possible to reach out and touch or converse with this person.”

This is because Mr. Nerdrum and his students work almost solely from “life and imagination,” Mr. Aviste said.

“The paintings reflect the way a human eye sees rather than the way a camera sees,” Mr. Aviste said.

He also enjoys the master’s storytelling and poetry that he sees in his works.

“Odd has told me more than once that he paints dreams,” Mr. Aviste said. “Not necessarily specific dreams he’s had, and not fantastical hallucinations, like the surrealists, but paintings that reflect the way we experience dreams. In a dream, the concept of time is completely abolished. Small details are also unimportant. The main focus is on what is happening — the story, which is usually full of human sentimentally and archetypical images.”

Mr. Aviste believes that the paintings of Mr. Nerdrum “will have the same effect on people now as in say, 500 years.”

Kant (1724-1804) and his “aesthetic theory” basically says that aesthetics form the philosophical grounds for the definition of art.

“It’s my intention to learn as much as I can from Odd, and to carry on the craft of narrative painting so that it does not die,” Mr. Aviste said.