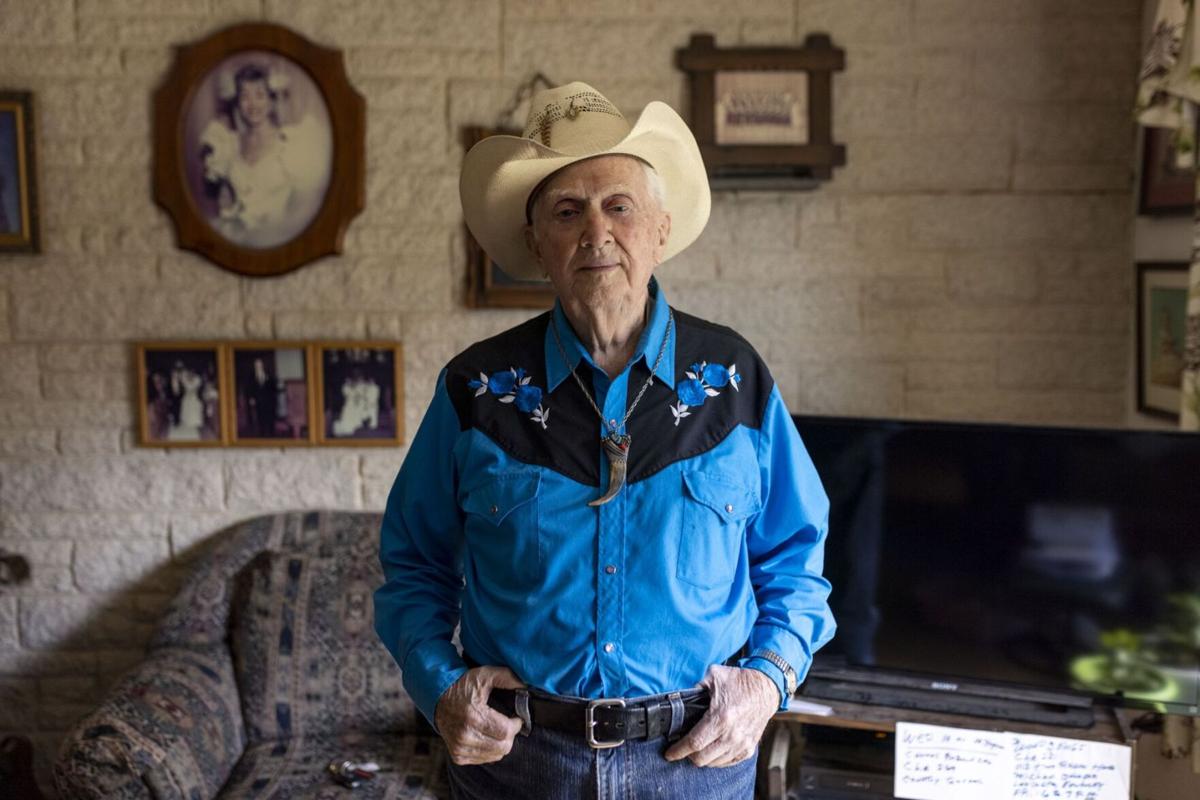 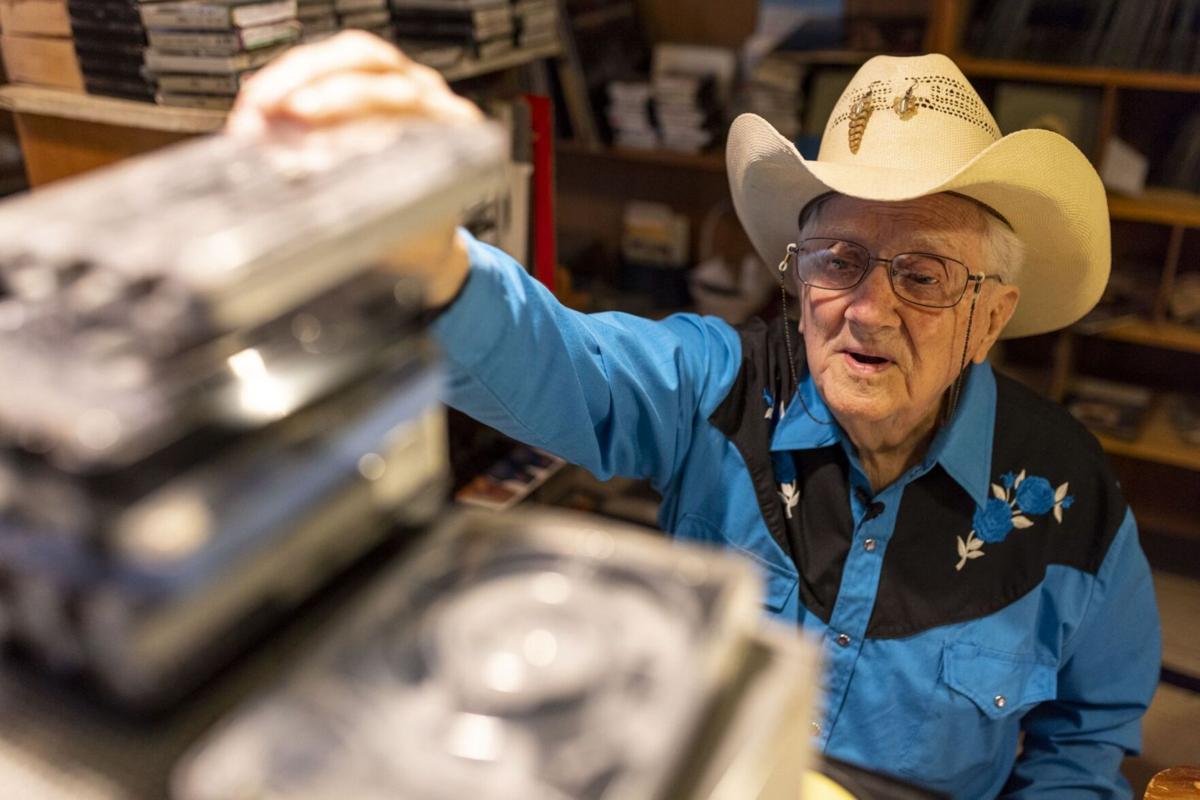 Country musician Al Shade for a recording featuring his granddaughter, Billie Joe Glassmoyer, on the guitar, at home in his basement studio. Tyger Williams/The Philadelphia Inquirer/TNS 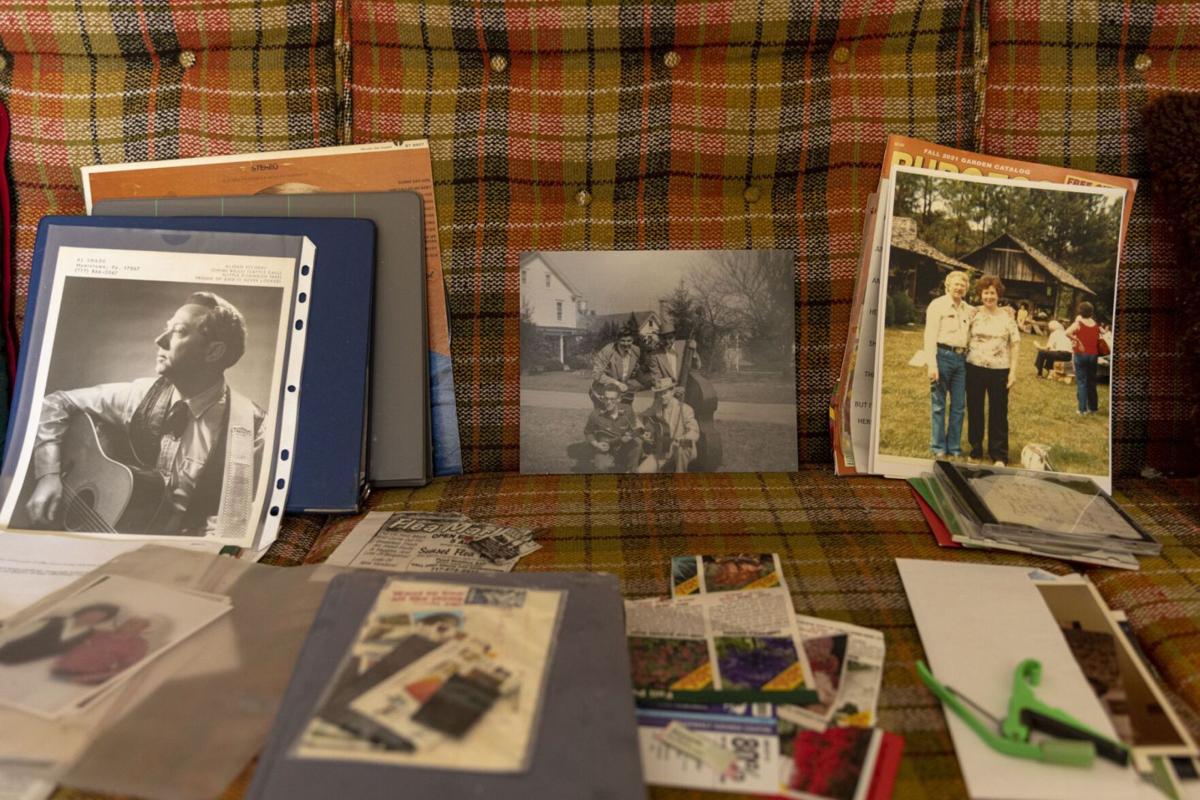 A spread of photos of country musician Al Shade, including a group photo with his first band members, at home in Myerstown, Pa., on Oct. 21. Tyger Williams/The Philadelphia Inquirer/TNS 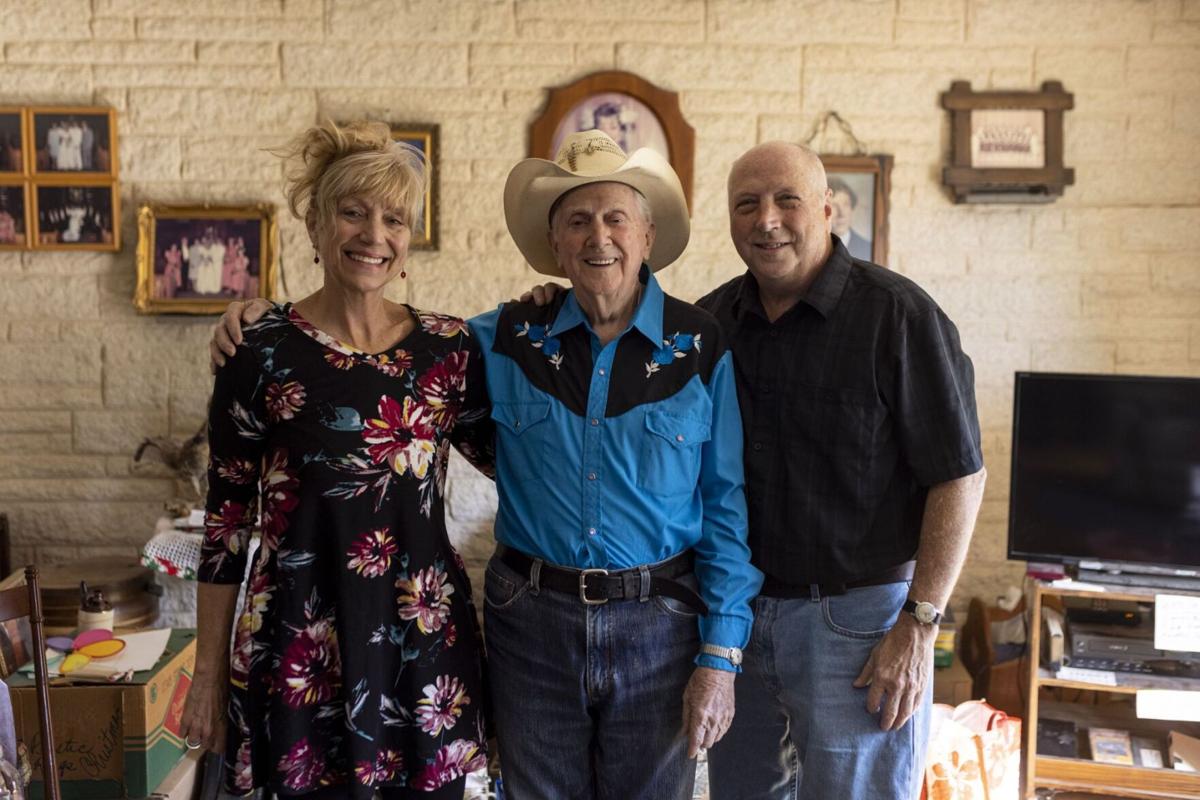 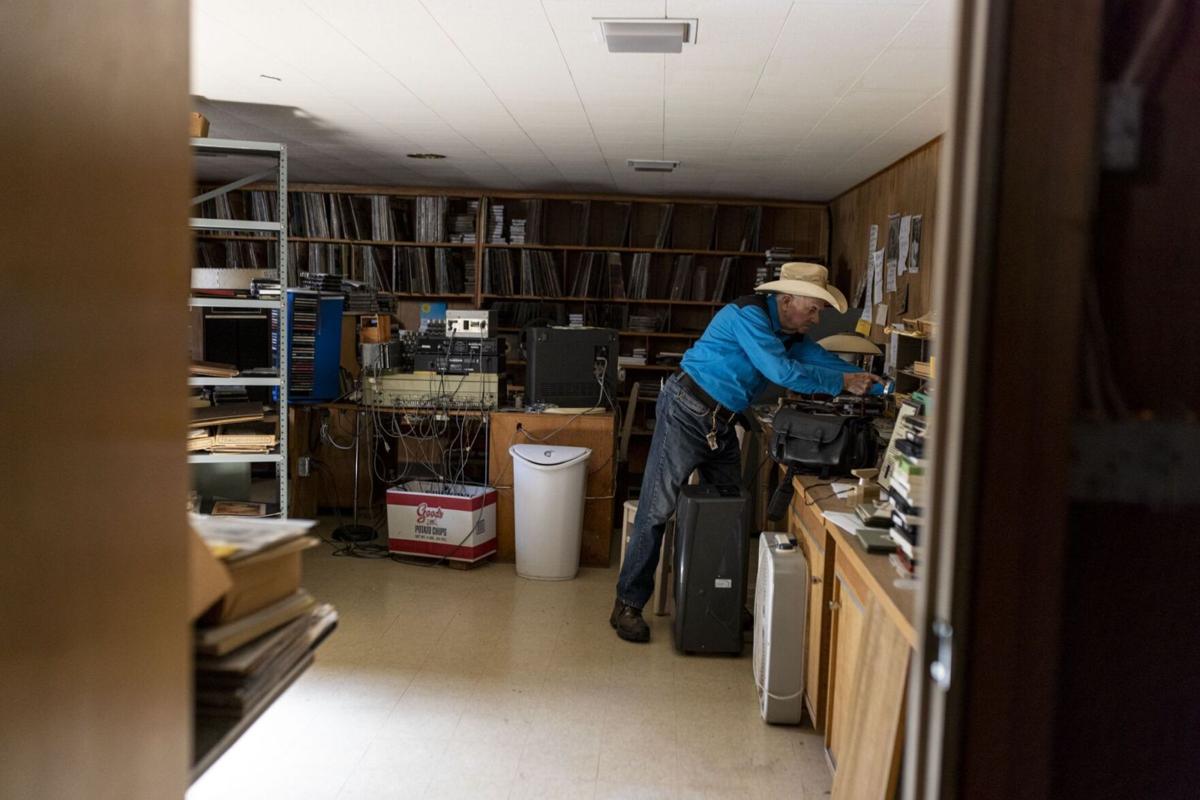 Country musician Al Shade, 94, of Myerstown, Pennsylvania, inside his basement studio where he keeps memorabilia, music, as well as a space to make music and run his radio station, on Oct. 21, 2021. (Tyger Williams/The Philadelphia Inquirer/TNS) 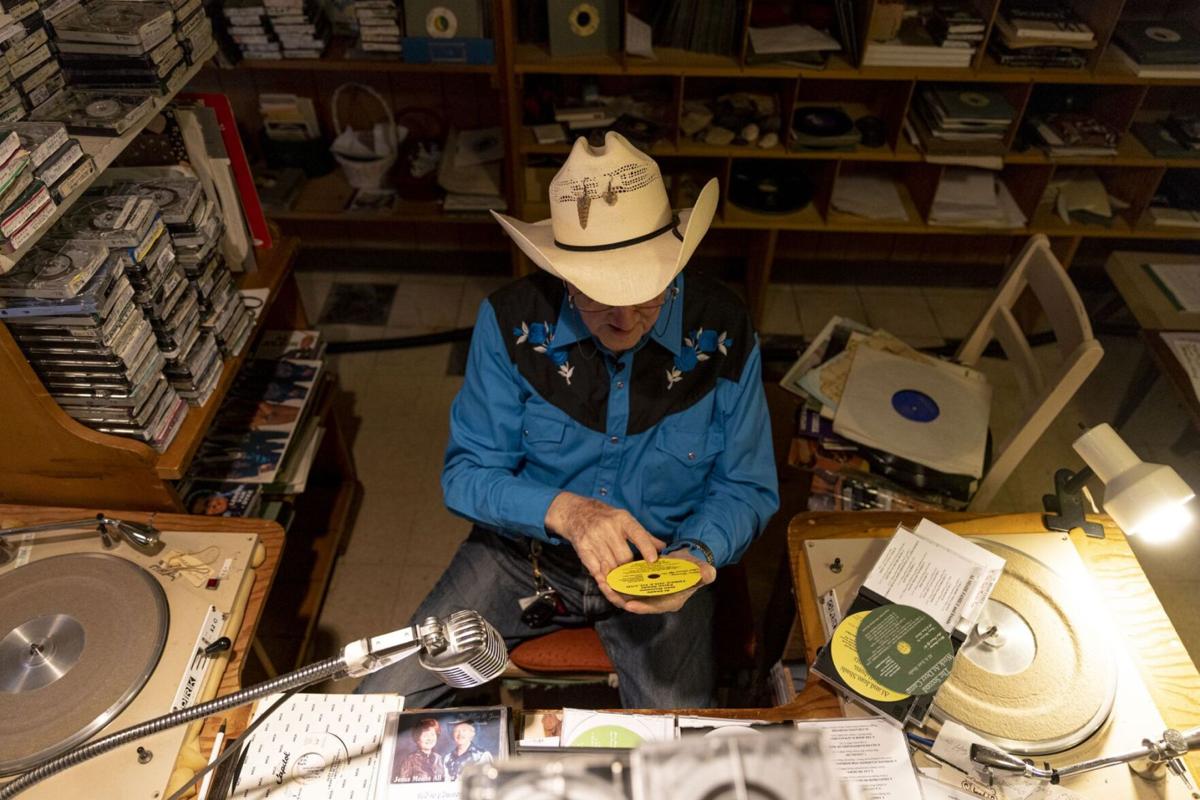 Country musician Al Shade, 94, of Myerstown, Pa., looks through CDs, tapes and records of music he’s made throughout his years, in his home basement studio on Oct. 21. Tyger Williams/The Philadelphia Inquirer/TNS

Country musician Al Shade for a recording featuring his granddaughter, Billie Joe Glassmoyer, on the guitar, at home in his basement studio. Tyger Williams/The Philadelphia Inquirer/TNS

A spread of photos of country musician Al Shade, including a group photo with his first band members, at home in Myerstown, Pa., on Oct. 21. Tyger Williams/The Philadelphia Inquirer/TNS

Country musician Al Shade, 94, of Myerstown, Pennsylvania, inside his basement studio where he keeps memorabilia, music, as well as a space to make music and run his radio station, on Oct. 21, 2021. (Tyger Williams/The Philadelphia Inquirer/TNS)

Country musician Al Shade, 94, of Myerstown, Pa., looks through CDs, tapes and records of music he’s made throughout his years, in his home basement studio on Oct. 21. Tyger Williams/The Philadelphia Inquirer/TNS

MYERSTOWN, Pa. — Down in Al Shade’s basement, there’s a music studio crammed with old vinyl records and a stuffed turkey. There’s guitar strings and cashed checks and decades-old publicity stills of the country crooner and his late, beloved wife, Jean — big hair and big hats — tacked to the wood-paneled walls.

There’s a yellowed, local newspaper article hanging there, too, near the collar of his beloved hunting hound, Princess, and the headline speculates on whether Shade, 70, at the time, would finally retire. But on this bluebird October day in Lebanon County, Shade sat at his broadcasting desk sorting through tapes, and the lamp light reflecting off the old condenser microphone made his eyes twinkle. He wore a classic western shirt embroidered with blue roses and the rattlesnake tails on his cowboy hat rattled when he bopped his head to the music. It was his 94th birthday.

“That’s because I’m a rattlesnake daddy,” he said of the hat.

Shade, who’s performed with the likes of Dolly Parton, Willie Nelson and Loretta Lynn, hasn’t tied his horse to retirement yet. He’s still got some rattling to do on the radio and in person, out in Pennsylvania, where’s he been singing and yodeling and making a living through country music for over 75 years. His Martin guitar and old, wooden box of music gear sit in the back of his Ford van in the driveway. His face and phone number are on the side and, every now and then, a retirement home rings, and Al Shade saddles up for one more show.

“Need entertainment?” is emblazoned on the van.

Shade’s enduring popularity in rural pockets of Pennsylvania isn’t surprising to the people between Philadelphia and Pittsburgh, in places where corn silos, mountains, and church steeples are the tallest things around and the radio stations scan from country to Christian and back again. There’s no country music sound unique to Pennsylvania, per se, but the state’s endless farmland and forest, its outdoor traditions and industries, even its ubiquitous county fairs touch on some the genre’s lasting themes.

“Pennsylvania music? It’s kind of hard to define,” said Linda Littleton, a folk musician and cofounder of the Pennsylvania Heritage Project. “But I think people in more rural areas generally like country music.”

Shade loved Pennsylvania so much that he penned a song about one of its most rural, rugged areas — Potter County — and a follow-up about one of its greatest catastrophes, the Three Mile Island nuclear accident.

Shade grew up in Gratz, a small Dauphin County town 35 miles north of Harrisburg. His father, Marlin, was a coal bootlegger, digging out his own mines under the cover of darkness. Money was scarce, Shade told The Inquirer, and sometimes that made his mother, Erma, cry.

“I used to go out picking dandelions to eat. You made a dandelion salad and cooked potatoes,” he recalled.

Two uncles — Bud and Clevis Huntzinger — introduced him to music as a boy, with guitars and nose harps.

“The Huntzingers were known for their great big noses,” Shade said.

Shade sat rapt by the radio on Saturday nights, when a country music broadcast from way out in Cincinnati reached his home. He paid $0.75 for weekly music lessons in the back of a furniture store and showed so much promise that his instructor gave him the Gene Autry practice guitar when he was drafted. Shade tried to get on local radio stations or find a place in a local band, to no avail.

After one year in the U.S. Army and some miserable days working in a Pennsylvania shirt factory, Shade landed a radio show — 10 minutes once a month — on WLBR in Lebanon. Shade said he wasn’t much of a soldier or laborer, and didn’t have the constitution to bootleg coal like his dad did. “I just knew I liked singing,” he said, and he sang so much his father used to make him go outside to sing in the outhouse.

“I used to play some square dances and I thought: I make more money in one night playing square dances than I do at the shirt factory in one month,” he said.

Shade got more airtime, more live gigs with full bands at carnivals and halls and parks. In the early 1950s, Shade met Jean Romaine Gesford, a farmer’s daughter from Hershey who sang duets with her sister. He booked them on his radio show. Shade said his voice harmonized well with Jean’s, and they made a lasting duet, marrying in 1955.

“I’ll be singing and playing my whole life,” he warned her.

Al and Jean Shade had two children, Faron and Debbie Ann, both of whom appear on countless recordings. Jean died in 2017 and, according to her obituary, was remembered for always having a “song in her heart.” Shade said he rarely sang alone after he met Jean. They played thousands of shows together as Al & Jean Shade, recording all over the country, including Nashville, yodeling in unison until their coda came. More than 800 people attended their 50th wedding anniversary in Leesport, Berks County, where they performed, of course.

“We were both as good as each other,” he said.

Shade said their home stage was the former Williams Grove Park, near Mechanicsburg, where he brought country icons Loretta Lynn and Willie Nelson to play. His backing band had “four of the best banjo pickers you ever heard.” Despite sharing stages with country stars, Shade said his fondest memory was playing some tunes for a Gratz boy who’d been having convulsions after being in a car accident. He played “What a Friend We Have in Jesus.”

“And that boy stopped squirming and wriggling right then and there,” he said.

Once described by a local news station as “Mister Rogers under a cowboy hat,” Shade had his rhinestone-studded outfits custom made. In his spare time, he hunted elk and grizzly bears out West.

Pat Garrett, another longtime Pennsylvania country musician, owns WWSM-1510, an AM station out of Lebanon County that still hosts Shade’s show. He said Shade’s always been a “good ol’ boy” and a consummate pro.

“He sells all his own commercials,” Garrett said.

And while most country musicians try to stake their place in Nashville, Garrett said Shade never left Pennsylvania.

“I really admire him,” Garrett said. “All he’s ever done is country music, and he’s been able to survive.”

Faron and Debbie Ann never asked their father to retire because music is his life, they said, not a job. Faron, a clock maker, even encourages his father to still play guitar. Faron said his father’s voice has deepened a bit over the decades but doesn’t waver. Debbie Ann often joins him to harmonize.

Shade said he scales the steep steps down into his basement studio 30 to 40 times a week, listening to favorite tunes, singing some out loud, and sorting through the memories piled up and pinned to the walls. He chooses most of the music that broadcasts on his radio show.

“I don’t usually listen to what’s happening today but I never run it down, because the times change,” he said. “I’m the kind of guy that realized everything changes, but I made my money on classic country.”

Upstairs, when someone calls, looking for entertainment, Shade’s answering machine tells them “we’re country and proud of it.” He also asks them to speak clearly and if the price is right, he’ll hit the road and take the stage.

“Music is just something that’s in my heart and in my soul,” he said. “It just makes me feel real good.”