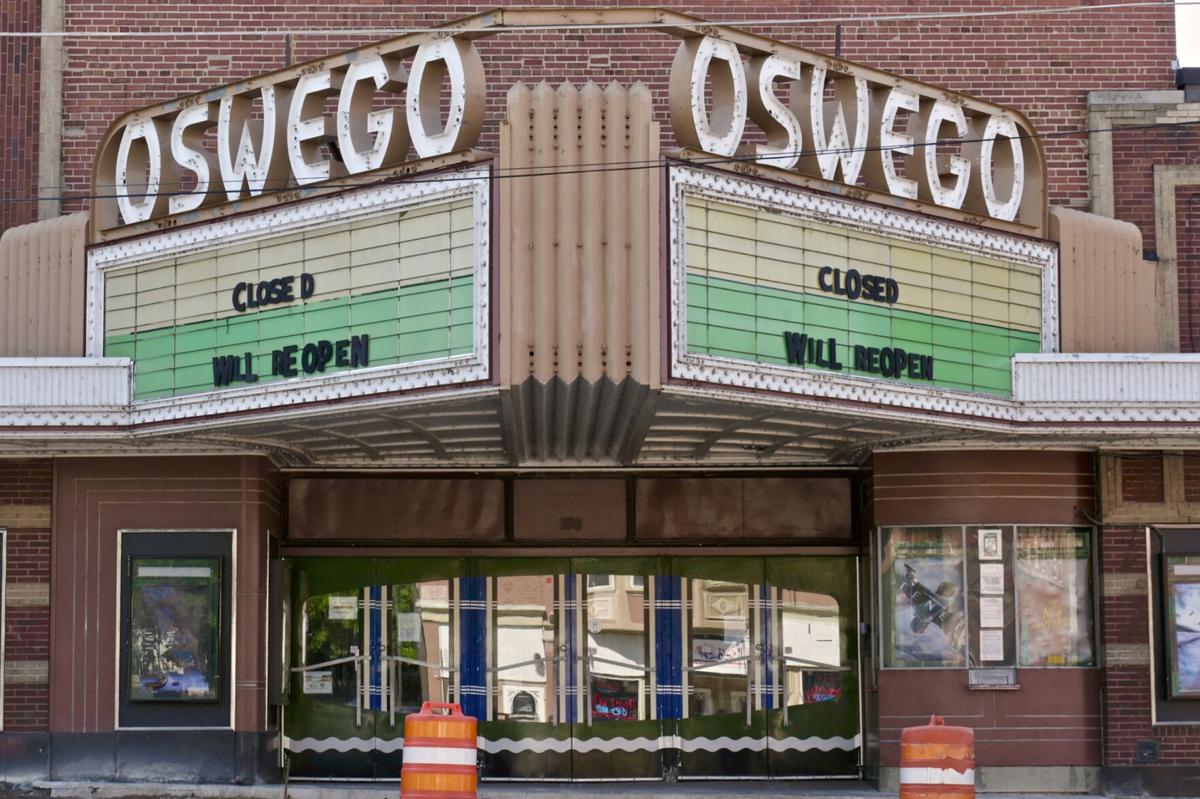 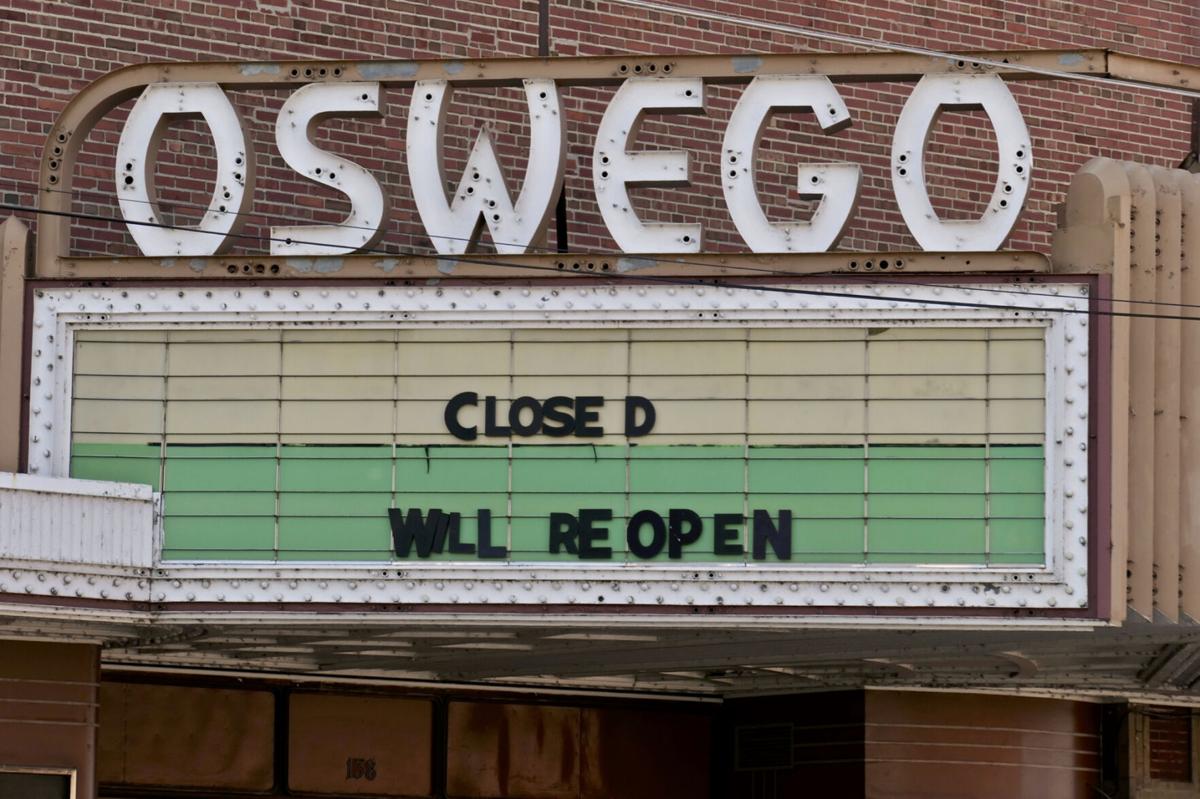 OSWEGO — The good times of the roaring ‘20s were a good time for the Austro-Hungarian émigré John Eberson (1875-1954), the era’s most famous architect of those fanciful “atmospheric” theatres of America’s early love affair with the movies. Of the 100 or so extremely ornate, exotic, and highly-detailed movie theatres he designed nationwide in that early style, only 16 survive today.

Known then as the “Valentino of theatre design,” Eberson and his good fortune went the way of the rest of America as the Depression, and the ensuing closure of one-third of this country’s movie theatres, took him in a much different direction to a style embodying the economy of excess that reflected the economy of the nation, yet one of perhaps a more lasting and classic beauty, that of the Art Deco, streamlined design that still graces Oswego’s West Second Street Oswego Cinema 7.

It was designed in 1940, opened in 1941, and recognized by inclusion on the National Register of Historic Places in 1988. Now it will get a facelift and technological modernization. On Aug. 19, Mayor William Barlow announced the theatre will receive an $80,000 grant to bring it back to its former glory as part of the Downtown Improvement Fund program through the city’s DRI (Downtown Revitalization Initiative). The grant funding will be used to refurbish and re-light the existing marquee, revive the exterior ticket window, replace fireproof doors, and upgrade the existing HVAC system with ultraviolet light filtration capabilities. The total project cost, including the $80,000 grant, is expected to come in at approximately $100,000.

In addition to providing the grant out of a state fund, the city will replace sidewalks and incorporate green space in and around the movie theatre during construction. The theatre’s owner, Zurich Cinemas, will pay the $20,000 balance of the $100,000 project.

Zurich Cinemas did not apply for DRI funding. Instead, Barlow said, the city “reached out to the theater owners to propose the project to them and offered the grant funding to help get it done. So, they applied after we encouraged them to apply.”

According to Barlow, the $80,000 came out of a “$575,000 set aside fund, from our $10 million DRI, we are using to help existing, small businesses do improvement projects or expansions.”

The theatre has been closed since March 17 due to COVID-19, but owner Conrad Zurich, of Fayetteville-based Zurich Cinemas, says the theatre will re-open, freshly refurbished and improved, once allowed to by Gov. Andrew Cuomo and when construction, expected to take from six to 10 weeks, is complete.

Originally designed as one large theatre, complete with balcony, the present Oswego Cinema 7 houses seven theatres, as the name implies, and has gone through numerous design changes and configurations over the years. It has, however, always maintained its Art Deco look, and Zurich intends to continue that tradition while bringing it back to life.

“It’s so unusual and so well-known, it’s just nice to be able to do that,” he said.

The new air filtration system is in response to COVID. “It’s something like ultraviolet which will purify the air. We’re putting all new filters in, and that will be something that will help a lot,” Zurich said.

Zurich is hoping a COVID vaccine will be available soon, but in the meantime, he said, they are working “to make sure everybody is safe and everything is completely kept clean. We’re going through extensive cleanliness procedures with the theatre.”

Though the theatre is 80 years old, Zurich has upgraded it a number of times throughout the approximate 25 years he’s owned it.

“We were the first theatre in upstate New York to install DTS digital sound in 1996. In 1997 we attached two additional auditoriums, and in 2014 we installed luxury reclining chairs,” he said.

Those chairs, so comfortable you’d almost go to any movie just to sit in them, are in five of the seven theatres of Oswego Cinema 7.

Asked whether the advent of Netflix and Amazon Prime Video has hurt his business, Zurich replied, “You know, you can eat at home, or you can eat at a restaurant. You can watch a movie on a small screen, or you can watch a movie on a large screen. There’s a tremendous amount of movies being made for hundreds of millions of dollars that we’ll be able to show, and by showing them on the large screen with very comfortable surroundings, with those lounge chairs, it’s really a completely different experience. And people like to go out for an entertaining night. Movies have always been a source of entertainment and escapism.”

Zurich Cinemas owns 12 other theatres besides the one in Oswego, 11 in New York state and one in Connecticut, for a total of 85 screens.

And though theatres throughout New York are presently closed, Zurich remains optimistic.

“Forty-seven states in the country are open right now and, unfortunately, we are not,” he said. “But hopefully, that will change very soon.”