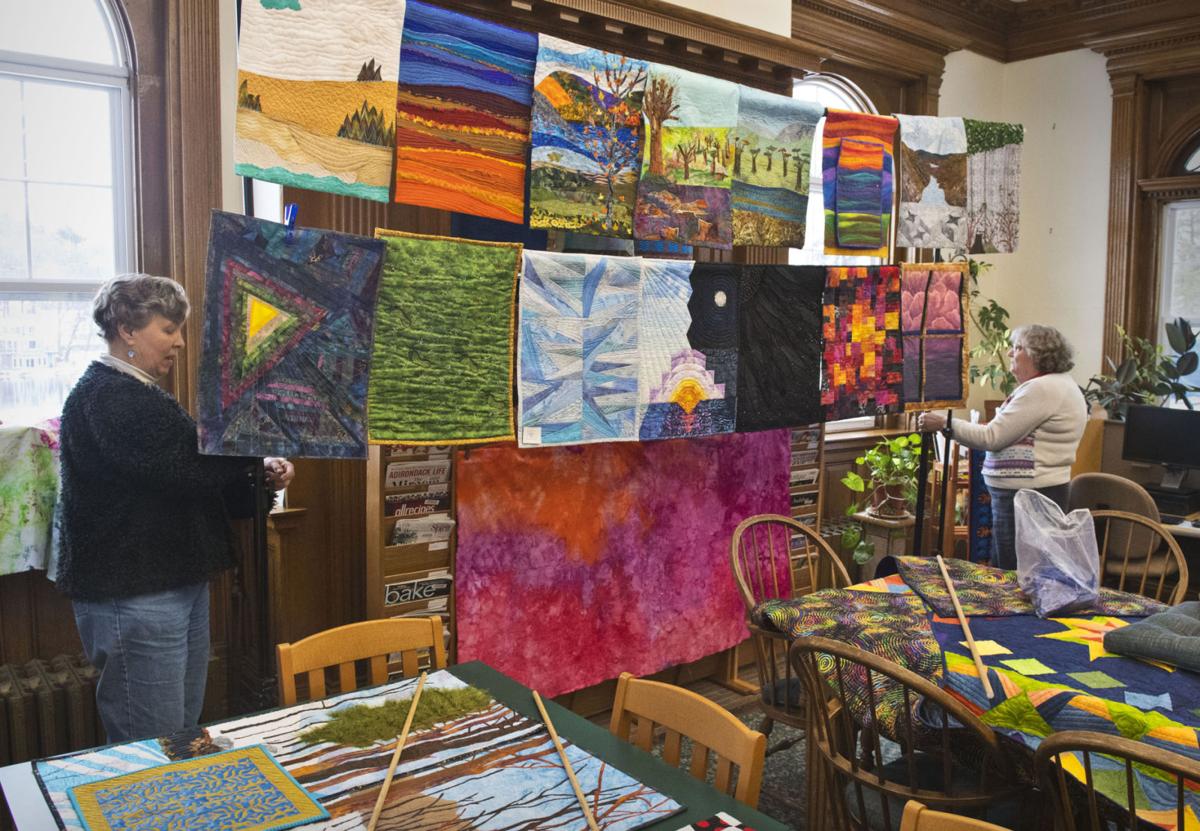 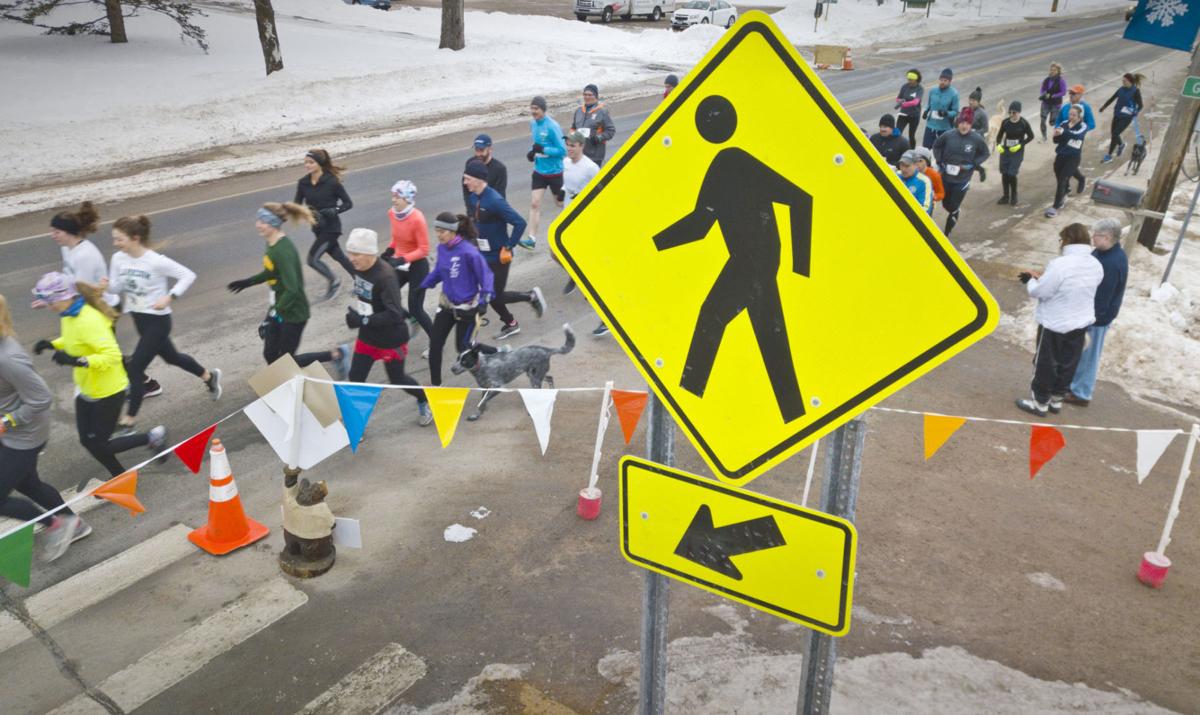 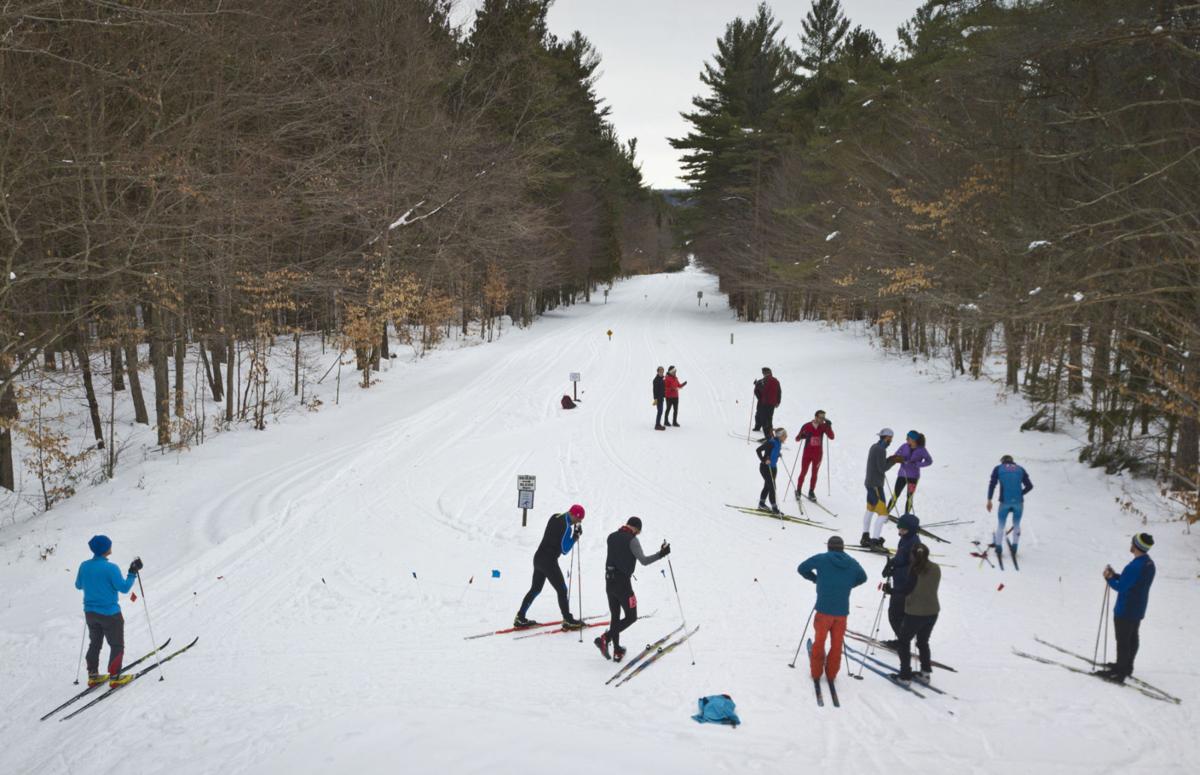 POTSDAM — As day three of Colton’s Winterfest kicked off Saturday with outdoor activities such as the 10-Mile Foot Race and the Rod Thomas Memorial Higley Hustle Ski Races at Higley Flow State Park, there were options to come in out of the cold and The Fiberistas gave Winterfest-goers a colorful one.

Inside the Colton Hepburn Library at 84 Main St., in the reading room off the left of the entrance, cables and walls were covered and draped with quilts designed with a bevy of themes, from landscapes to the elements.

And we’re not talking about the kinds of quilts you cover your bed with. These works were indicative of painting with fabrics and they were works of art.

Rebecca M. “Becky” MacKellar, Canton, was eager to talk about the creations, greeting visitors and walking through the nuances of quilting and the devotion to themes the quilting group created.

“We decide to do a challenge every year and this is what we call a slice quilt,” she said, pointing to a series of segmented quilted brownstone, storefront buildings that, when lined up, created a larger picture.

“We have a theme and last year’s theme was the elements of nature, so you have light, you have water — if you look close there is dew, ice, day and night, and then darkness — that one’s mine, fire and the air,” she said, pointing to the “Elements” slice quilt which hung along the wall. “They had to be bound, if you look on the edges you can see there is a frame. Those were the only restrictions and we pulled them out of a hat, what we got. I was all excited that I got darkness because I use a lot of black, until I realized you had to use light to show darkness and the woman who got light realized the same thing. Now I did it basically, I didn’t want to use light and if you look up close you can see there are a lot of textures.“

Sequins and beads are sewn throughout, causing light to reflect off them.

She said the guild has participated in Winterfest since 2014 and each year, it is where they premiere their annual slice quilt theme with the first year being a block in Canton, which she referred back to the brownstone storefronts.

The following year the Fiberistas created a 12-foot-wide landscape of a sugar bush as “slices.”

There are regular quilt guilds and then there are The Fiberistas. They do “fuzzy stuff, textural stuff. We do all machine stitching. We can do some nice hand stitching, we use paint, bugs can be used as a design,” Ms. MacKellar said.

“We chose to bend the rules a bit. Even having rules for these is complex to get people to follow the rules,” she said. “I find that when I’m making a quilt the worst restriction for me is size. But his was the right size, I did stick to it, but I didn’t wanna.“

And while Ms. MacKeller chooses to be more abstract with her work, Fiberistas Kathy M. Burns said she lays her work in more concrete form.

“It looks like a particular assignment,” Ms. Burns said, pointing to one of her pieces called “Tulip.”

Ms. Burns said part of the theme was to use the “ice-dye” method, which gives it a tie dye look about it, with swirls of yellow and pink. She said the original result was just too abstract for her.

“I just chopped the piece up because I like concretes,” Ms. Burns said. “So I had to make sense out off it, so I cut it into six pieces, six pedals, and I used a different stitch to represent each pedal and I graded it by the density of the pink to a counter clockwise, so there was a lot of thought into it.”

There’s all kinds of problem solving and proportion in making the designs, but there is also inspiration from life and words, Ms. Burns said, showing another creation that was based off the word “joy,” which she said another of the Fiberistas offered her as a direction to work in.

“I said give me a concept, gimme a word and she said, ‘joy,’ and I think, ‘what gives me joy? Music, family, it’s going to be really hard to narrow down so I decided on a tambourine.”

She created the tambour out of decorative coins and strips of different fabric, representing different themes and ethnicities, like shamrocks to represent her Irishness, were strewn about the quilt, giving a three-dimensional look.

“Everybody is represented here, there should be at least one fabric here that should appeal to anybody,” she said. “First I was going to group them in three because I needed the order and it was just making me crazy, so I said why don’t you just cut all the strips and it’s OK if it’s messy.

“Joy is like an explosion, so just make it look like that,“ Ms. Burns said. “So it was a great exercise for me to get outside my box.“