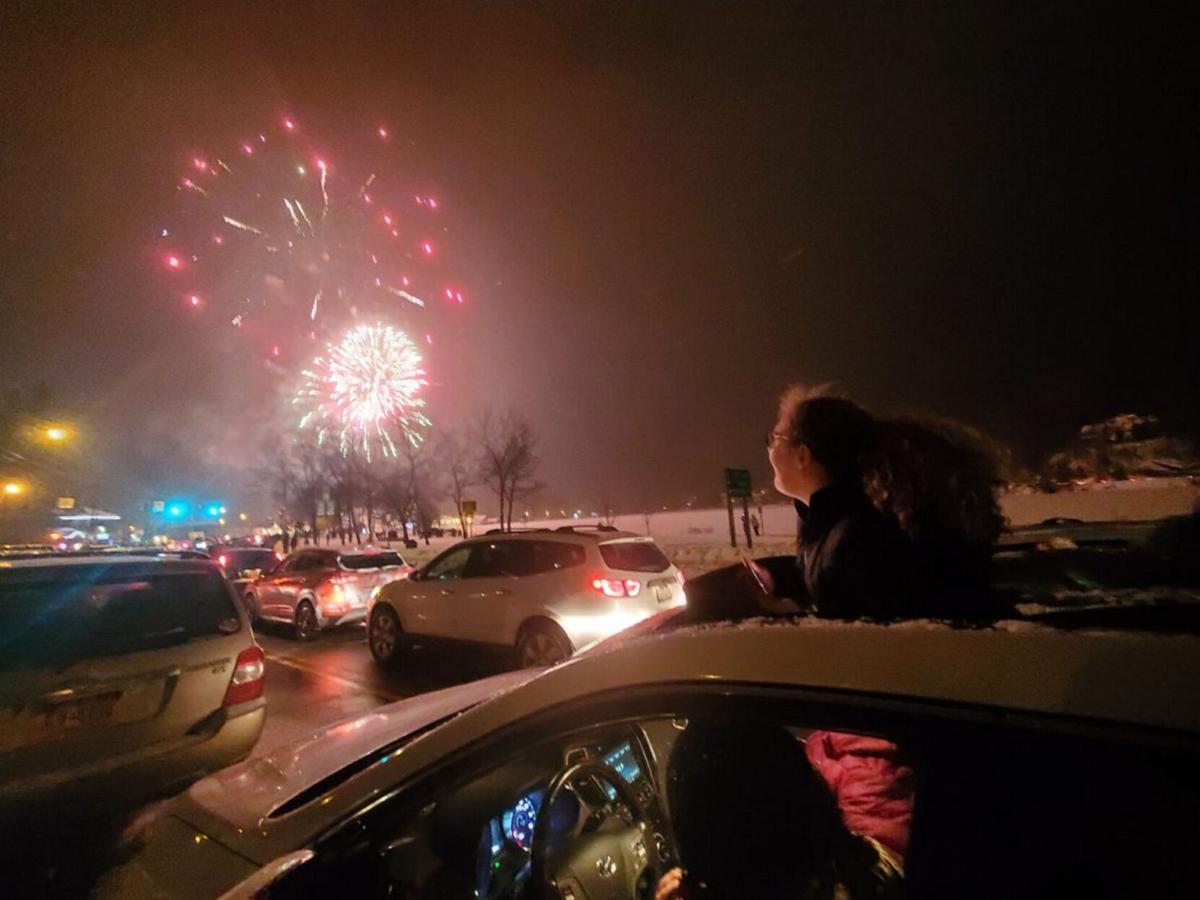 Kiera Ryan-Gadway pops out of the sunroof of a car to watch the Winter Carnival opening fireworks show Saturday amid a string of cars parked along River Street. She was celebrating her 14th birthday with her grandmother, Kathy Ryan, who was also celebrating her birthday from the passenger seat. Both said they were glad the show could go on. Aaron Cerbone/Adirondack Daily Enterprise 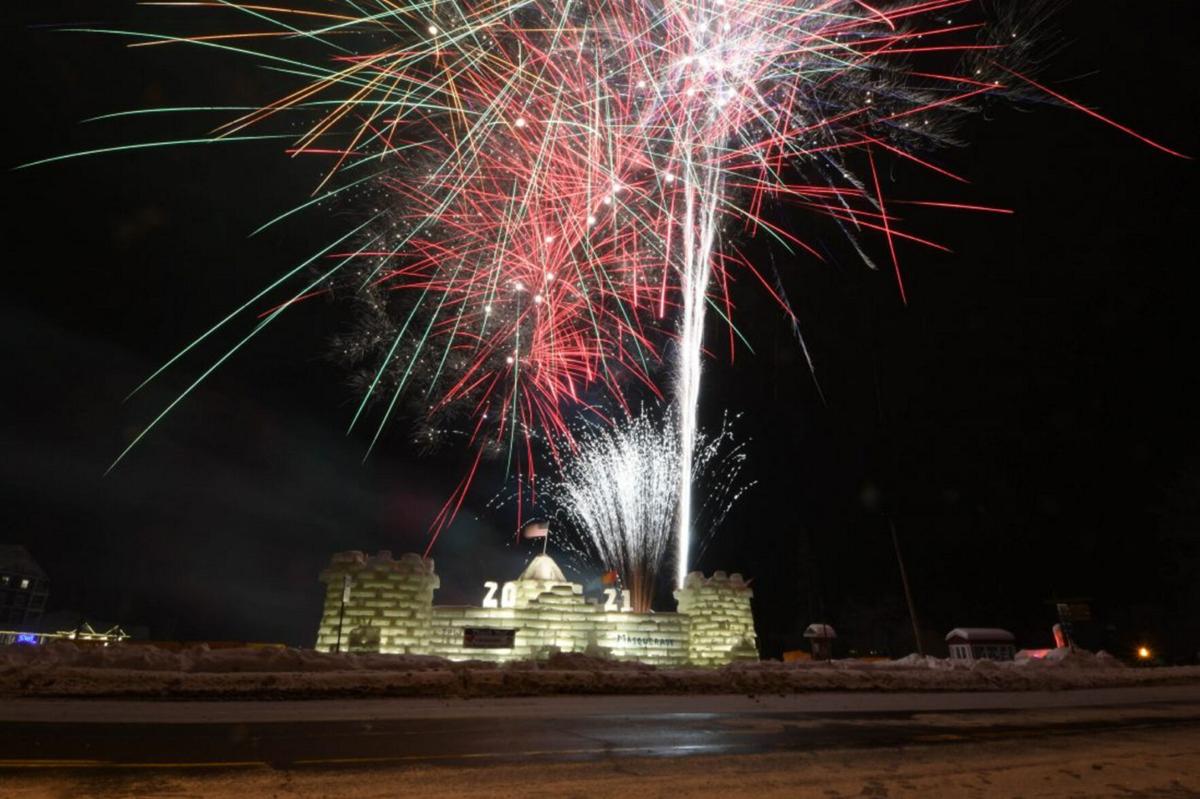 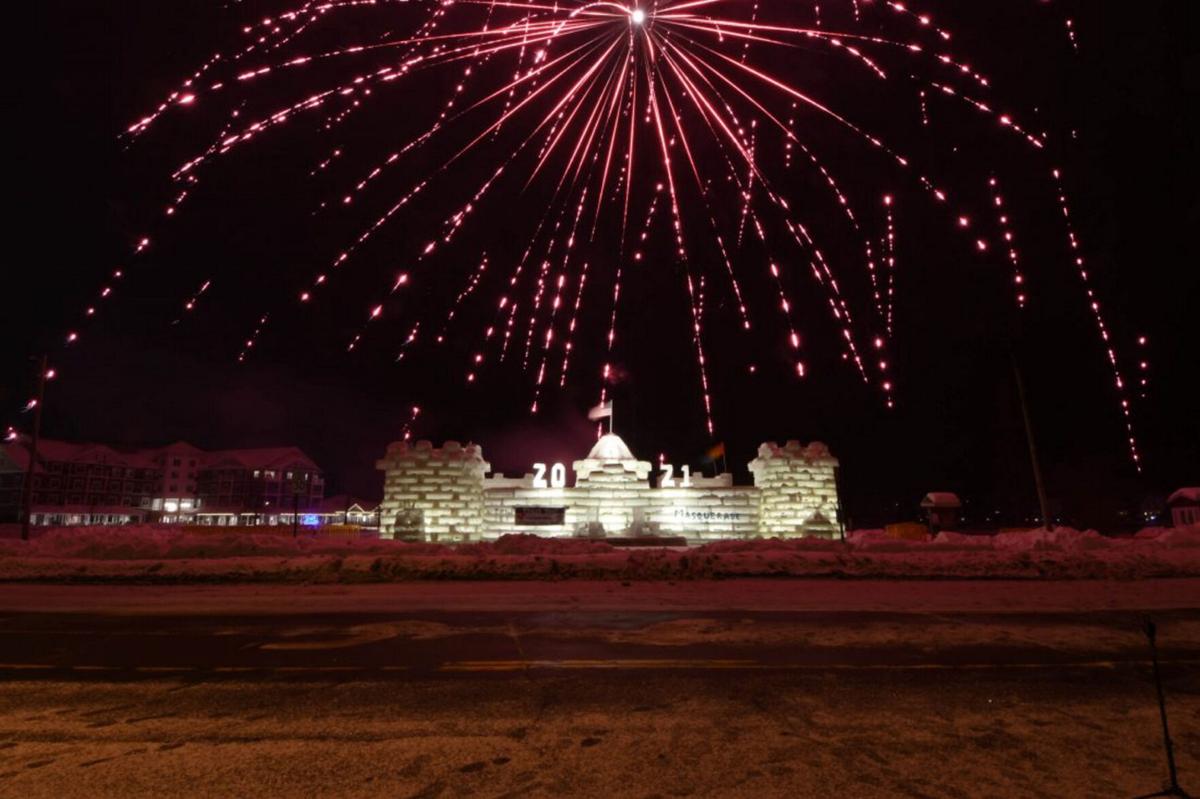 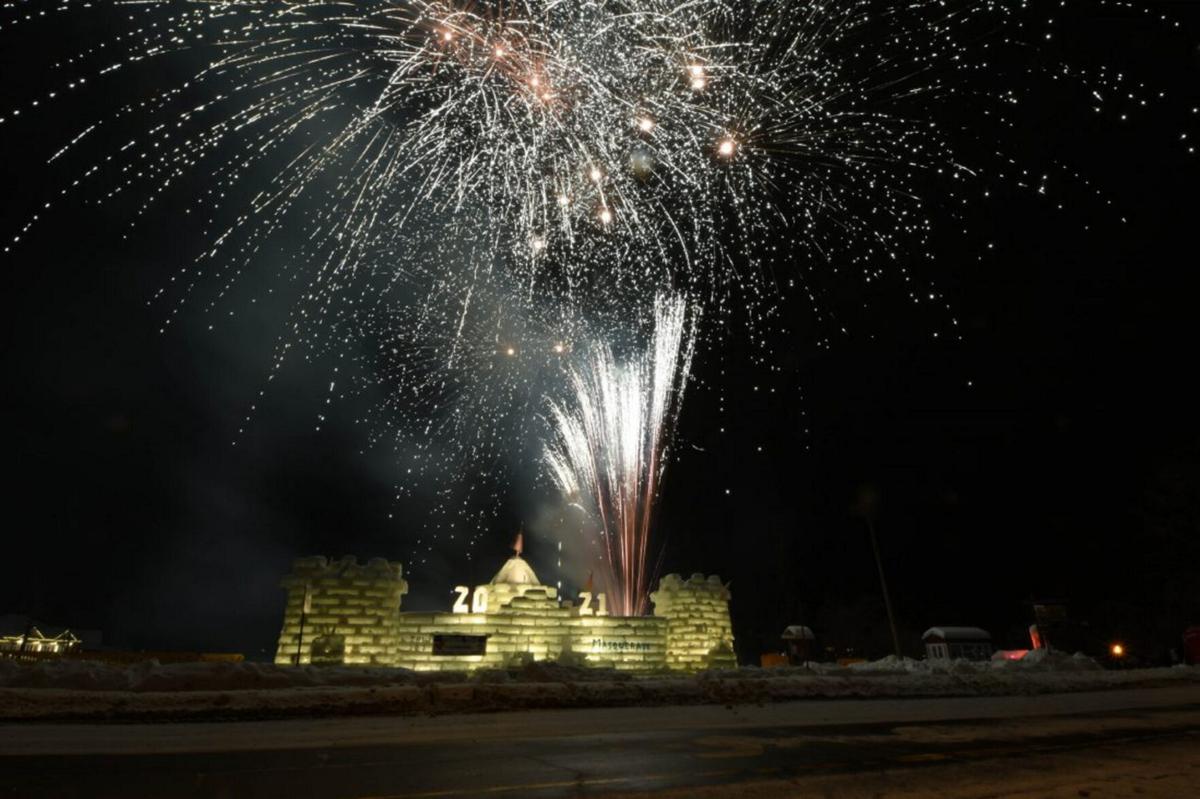 SARANAC LAKE — Hundreds of cars parked bumper-to bumper along River Street and across Lake Flower on Kiwassa Road honked their horns Saturday night, summoning the start of the 2021 Winter Carnival opening fireworks show and lighting of the Ice Palace.

Though the state has a 50-person limit on events due to the COVID-19 pandemic, local health officials approved a “park-and-view” plan for people to watch the lighting of the Ice Palace from their cars, socially distance and wear masks.

Winter Carnival Committee Director Jeff Branch asked that people stay in their cars, as they do not count toward that 50-person gathering limit. Not everyone showed up in a vehicle, though.

For the most part, the pedestrians who walked from around town to see the show were socially distancing in groups along the sidewalk and in the parks. A crowd of about 100 were gathered on the corner of River Street and Shepard Avenue in the Lakeview Deli and Fusion Market parking lots. Masks there were prevalent, with exception of some children and a few adults.

Carnival volunteers and Saranac Lake police officers were there reminding people not to gather too close.

Before the fireworks begin, the Winter Carnival Royalty and Court members traveled on a float from Sturdy Supply and Rental, down Church Street to the Ice Palace on River Street.

Carnival King and Queen Joe Szwed and Nancy Heath — who returned as king and queen again this year — said they looked forward to the procession as they sat on their mobile thrones Saturday night, but were more happy the high school seniors in the Court could be on the float.

“We’re just happy that the kids get to do it,” Heath said. “We wanted them to have some semblance of the stuff that we normally do, so it was great that they did this.”

In the video the high school seniors, wearing two masks — classy black ones over their mouths and noses, and fancy, sequined ones over their eyes — dance energetically to the Backstreet Boys’ song “Masquerade” in the driving snow.

Many layers of government had been notified of the plans for the event — the North Country Regional Control Room, Franklin and Essex county public health employees and legislators, and village officials — but the ultimate decision on if the plans were safe and acceptable came down to Saranac Lake Public Health Officer Ray Scollin. Other agencies said they wanted to see the plans but mostly stepped out of the way.

The outcome of Saturday’s event will determine if a second fireworks display scheduled for Saturday, Feb. 13, can be held, according to village Manager John Sweeney.

Scollin had not spoken with Sweeney or Branch by Sunday evening and said he could not comment on Saturday’s fireworks until he did.

Traffic flowed along Broadway and Main Street to River Street, where vehicles parked to watch the fireworks, the route the Carnival Parade usually takes. People hung out the windows of apartments overlooking the street, calling out “Happy Carnival” and taking pictures, and people in cars responded with honks and hanging out their windows to return the greeting.

Some people walking around were dressed up in masquerade attire.

When parking on River Street began, at least one car just trying to drive down the street was caught in the fireworks parking line. Police officers told them they could stay and enjoy the show if they wanted, but if they wanted to get to their destination they had better leave before the fireworks began.

Tourist pedestrians walking past were baffled by the unmoving line of cars and asked drivers what was happening.

Kiera Ryan-Gadway, from Rouses Point, was celebrating her 14th birthday with her family in two cars on River Street and popped out of the sunroof to watch the fireworks for a bit. The trip was a birthday surprise and she said the appreciated the Winter Carnival Committee’s plan to have the park-and-view fireworks show.

“I think it’s really good because they still found a way for it to be safe,” she said.

Her grandmother Kathy Ryan was also celebrating her birthday in the passenger seat. She was glad they could celebrate together and see the fireworks.

“Of course, we’re in Saranac Lake, so it’s going to be dynamic,” she said

A family member named John was running food between the two cars they had there, delivering pizza and wings to the socially-distanced birthday partiers on the road.

Several bars and restaurants downtown were busy with customers before and after the fireworks.

The show was synced up with music broadcast over FM radio, so people could listen in their cars.

After the crescendo of the show, an onslaught of booming fireworks set to the techno song “The Phantom of the Opera” by Harajuku, the assembled cars again beeped their approval before driving off into the night.

The fireworks, filmed by drone by Jordan Craig, can be seen at https://bit.ly/3oSJxx2.