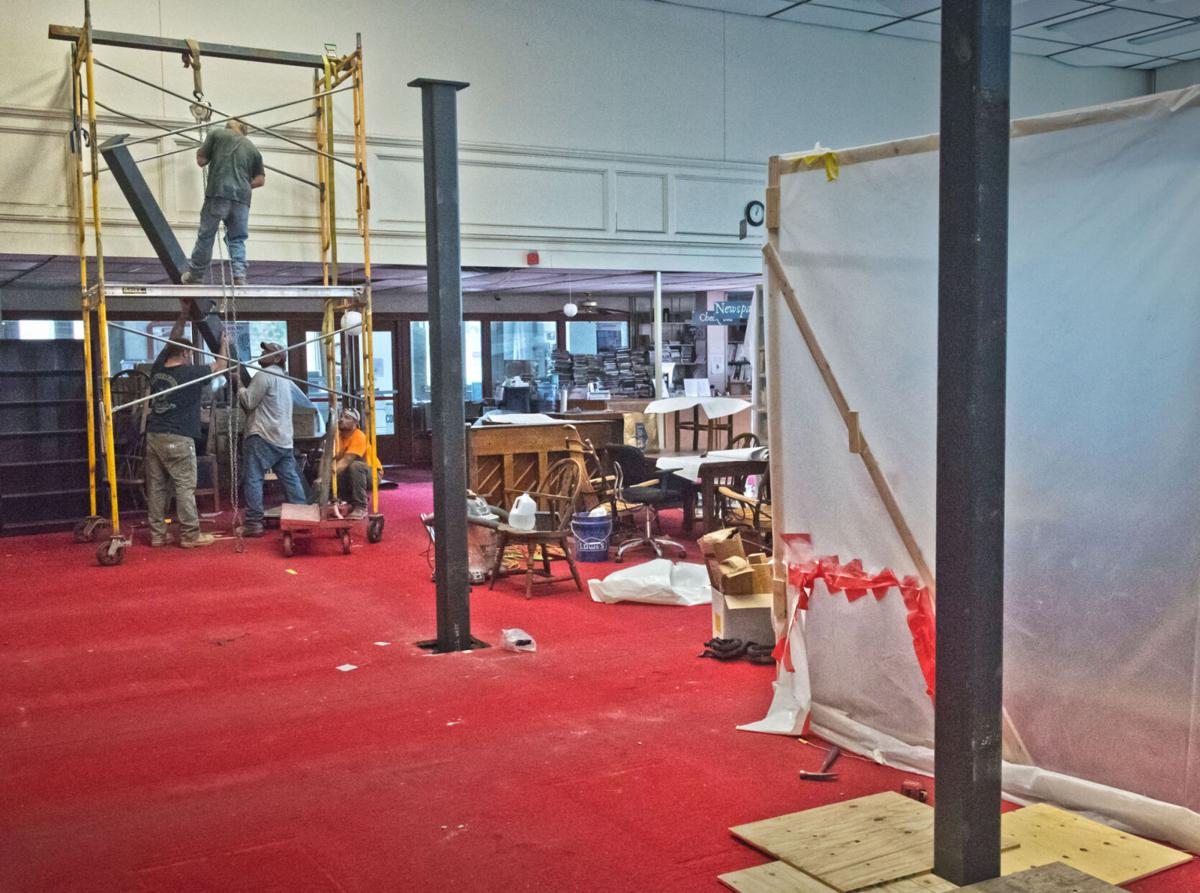 A crew from Continental Construction, Gouverneur, on Thursday sets the last steel column for the mezzanine being built at the Potsdam Public Library. Christopher Lenney/Watertown Daily Times 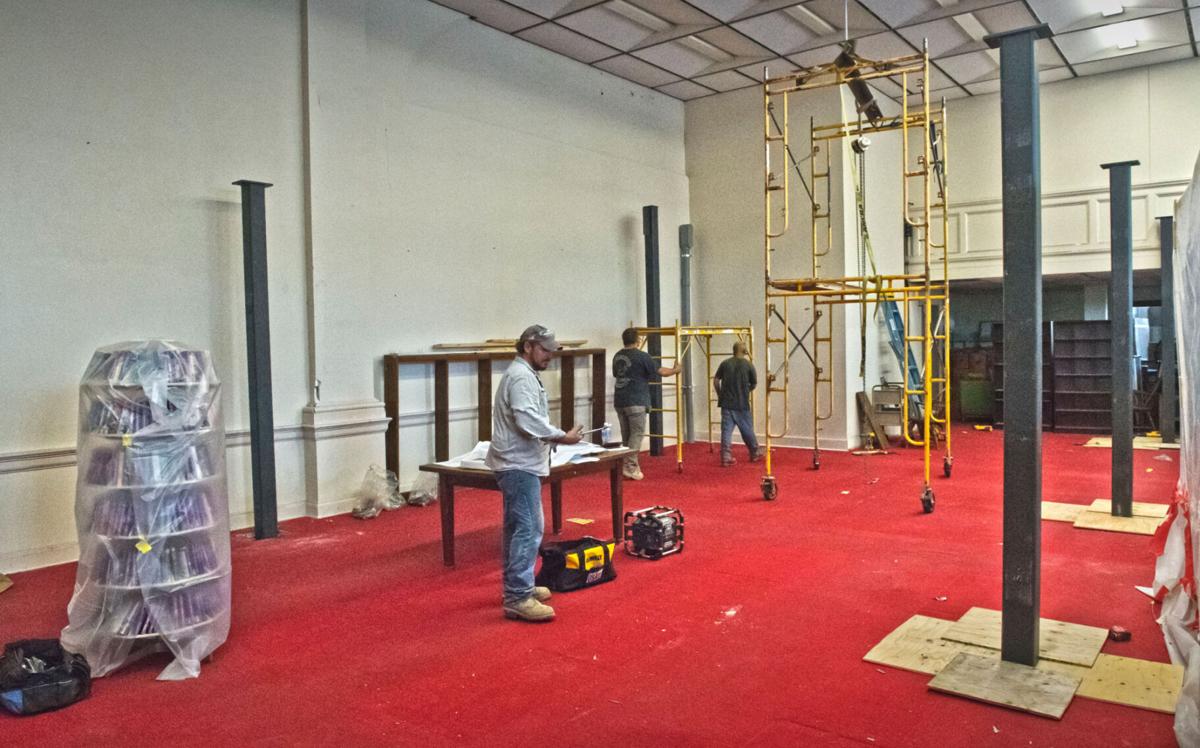 With steel columns in place Thursday, a crew from Continental Construction, Gouverneur, assembles scaffolding and prepares to install deck beams for the mezzanine being built at the Potsdam Public Library. Christopher Lenney/Watertown Daily Times

A crew from Continental Construction, Gouverneur, on Thursday sets the last steel column for the mezzanine being built at the Potsdam Public Library. Christopher Lenney/Watertown Daily Times

With steel columns in place Thursday, a crew from Continental Construction, Gouverneur, assembles scaffolding and prepares to install deck beams for the mezzanine being built at the Potsdam Public Library. Christopher Lenney/Watertown Daily Times

POTSDAM — Situated along Park Street, a three-sectioned stone building has served as the village’s civic center for decades.

The center — which now houses the Potsdam Museum at the northern end, the library to the south and municipal offices sandwiched between — has undergone several upgrades since it formally opened in the 1930s, and more are under way.

After delays to anticipated construction this spring when the COVID-19 pandemic arrived in New York, phase one of the three-phase Potsdam Public Library renovation is back on track.

Walking through the library’s main level this week, shelves and stacks are blanketed by plastic tarps, and a crew from Continental Construction, Gouverneur, placed steel beams to support a new mezzanine. A radio played hits as four men fitted beams through the floor, connecting to beams they previously set in the foundation.

“Having had it look one way for the 21 years I’ve been here, and now looking at everything torn apart, is stressful,” said Sarah L. Sachs, the library’s public service manager and leader of the Literacy is for Everyone, or LIFE, program. “But it’s going to be great.”

Now a years-long process, the library’s major overhaul stalled last year, after months of searching for a contractor. Construction was originally scheduled to begin a year prior, in October 2018, had a bid been accepted. By the time library staff prepared the building for phase one in March of this year, the novel coronavirus prompted the state’s roughly three-month pause.

With Continental on board to execute plans from Rebecca N. Weld, the principal and founder of Potsdam’s Renew Architecture & Design, and the pandemic beginning to subside in the north country, construction started this summer.

Phase one primarily accounts for the mezzanine build, which will create a raised space above one-third of the library and cover an enclosed children’s space below. The mezzanine level will feature seating, the adult nonfiction section and a computer center.

Phase two involves removing the dropped ceiling, now at a height of 16 feet. Once opened up, the ceiling will tower 24 feet. Floor work and installation of a new heating, ventilation and air conditioning system are also incorporated into the second phase.

Continental’s contract will end when phase one is complete, likely this fall before the end of the year, Mrs. Sachs said, though the pandemic or potential obstacles associated with renovating a 20th-century building could prompt additional timeline adjustments.

A second contract will be required for the second phase, and should Continental be granted the bid, work from phases one and two may overlap.

The library remains closed through at least phase one, though staff said they hope to begin a partial reopening — appointments for computer use, for instance — as soon as possible.

“People depend on library for so much more than books,” Mrs. Sachs said, adding that tax form assistance, internet access and an open community space are only a few of the basic services libraries provide. “It’s a real hardship for people not to have that access right now.”

Information about virtual resources and renovation updates is posted to the library’s website.

Libraries just attempting to justify their existence. I really don't see how a world can exist where tons of bookstores close (a trend that has already happened) while libraries generally stay open. Libraries may stick around longer than the underlying consumer behavior supporting them. Because funding libraries is a political, not an economic decision. People’s taxes confirm this. Nevertheless, I believe strongly that public libraries will turn into ghost towns in five to fifteen years, at which point it will become very difficult to justify funding them and keeping them open. Why? Because libraries have high fixed costs that need to be covered by a threshold level of demand and the demand just isn’t there..