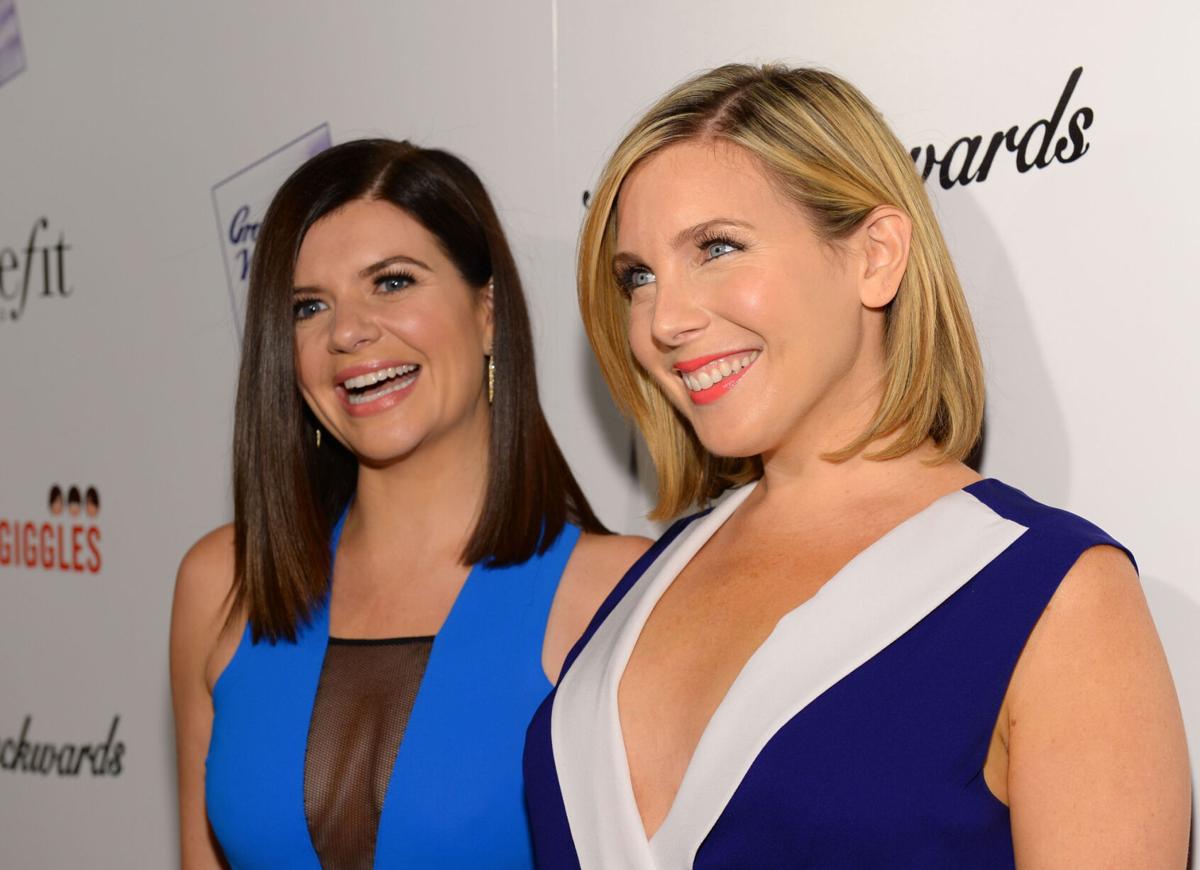 Casey Wilson , left, stars in “The Shrink Next Door,” on Apple TV with Paul Rudd and Will Ferrell. Mark Davis/Getty Images/TNS 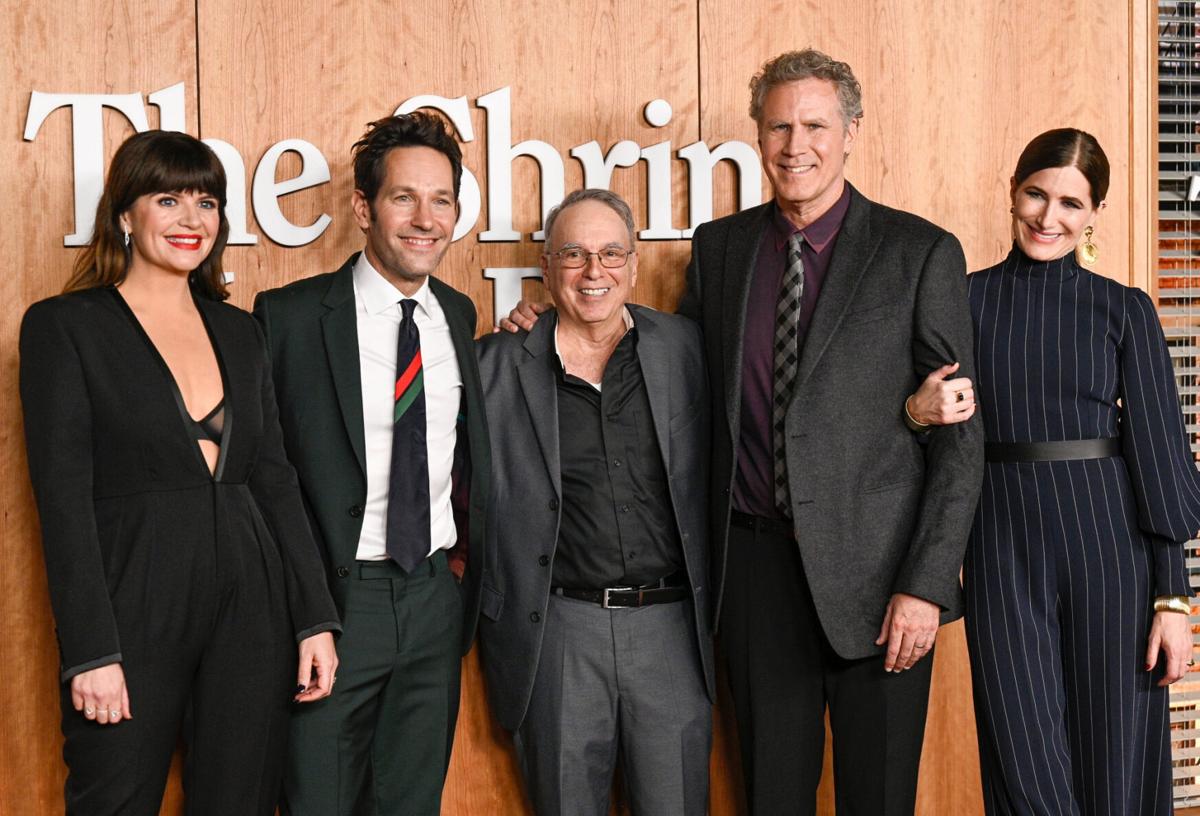 From left, the cast of “The Shrink Next Door”: Casey Wilson, Paul Rudd, Martin Markowitz (the real patient on whom the story is based), Will Ferrell and Kathryn Hahn. Evan Agostini/Evan Agostini/Invision/AP 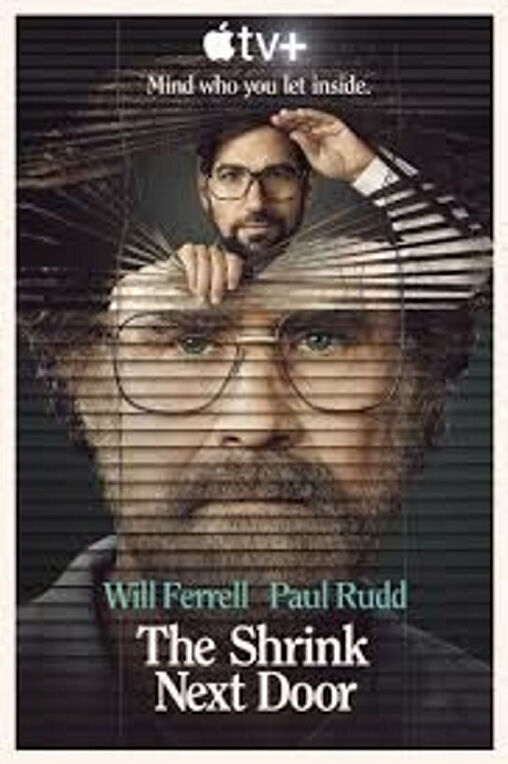 Casey Wilson , left, stars in “The Shrink Next Door,” on Apple TV with Paul Rudd and Will Ferrell. Mark Davis/Getty Images/TNS

From left, the cast of “The Shrink Next Door”: Casey Wilson, Paul Rudd, Martin Markowitz (the real patient on whom the story is based), Will Ferrell and Kathryn Hahn. Evan Agostini/Evan Agostini/Invision/AP

In the new Apple TV+ series “The Shrink Next Door,” Paul Rudd plays a psychiatrist who, over a period of three decades, manipulates and exploits a wealthy if vulnerable patient, played by Will Ferrell. It’s based on a true story that was also one of the most popular podcasts of 2019. Casey Wilson plays the doctor’s wife, who both benefits from, and is concerned by, his sleazy methods, which he used on other clients as well.

“In a way, she’s his first cult member,” said Wilson. “Ultimately, she’s so charmed by her husband initially because he’s so charismatic. So she’s fighting two emotions: One is that she loves her husband, and the other is that she has a deep sense that what he’s doing is very wrong.”

Early in her career Wilson had visions of being a dramatic actor, but said she discovered “sometimes even when I wasn’t trying to be funny people were laughing,” so perhaps it was inevitable that she made her name in comedy, first on “Saturday Night Live” and later on the Chicago-set series “Happy Endings,” created by Chicago native David Caspe, to whom she has been married for the last seven years.

When asked about a worst moment in her career, Wilson prefaced her story with a warning: “This is a bad one. It paints me in a bad light, so please include that sentence: I know I was quite wrong.”

“I was 23 or 24, so young and a bit dumber in the ways of the world and the business. I was comedy partners with my best friend, the actress June Diane Raphael, who’s on ‘Grace and Frankie,’ and we were doing this two-woman show at Upright Citizens Brigade Theater. We got agents off that show and we got noticed from it, and the UPN network, if you recall that one (the broadcast network has ceased operations), bought a TV pilot based on our lives.

“Every time something good would happen to us, we would be like, ‘(Forget) our old lives, we’re stars now!’ (Laughs) It was very strange behavior. This was long before I did ‘SNL.’ We’d done nothing. We hadn’t even done ‘Bride Wars’ yet (on which they were screenwriters). This is the first big thing to happen to us career-wise.

“So we’re at a party and we had just learned that we sold our pilot. We didn’t know enough to not brag shamelessly to people — we were waitresses and assistants — so we were like, ‘Oh my God, we just sold a show!’ We told everyone.

“And there was a guy at the party, a lovely guy who was in a band that we liked and he had a song that I loved. And I said, ‘We just sold a pilot!’ And he said, ‘Oh my gosh, that’s so amazing. Would you consider using my song in it?’

“Now, I was a little surprised. We hadn’t even started working on this yet. It was my first taste of ‘everyone is hustling out here’ and I was feeling very put off by this very innocent question. It was like, buddy, wait a second until we’ve done any of this before you start asking for something.

“So the next morning I sent June an email, like the catty little (jerk) that I was, and I said, ‘Ugh, can you believe it? Already people are hitting us up.’ Basically, like, we’re so famous that now everybody needs something from us. I was acting like some put-upon super star: ‘Can you believe our friend had the nerve?’ But I pointed out that it was a great song and he’s a nice guy.

“So I send the email. And I look up and realize I had sent it to him.

“I was probably thinking of his name and just typed in his email address. This was at a Kinko’s on Union Square in New York — remember when you would go into a Kinko’s to use the internet? — and in that moment I pushed back from my seat and screamed at everyone around me, ‘I need to get an email back from AOL, help me!’ (Laughs) I’m screaming! And people are alarmed, they’re thinking something terrible has happened. But it wasn’t great! Like, this nice guy is going to see me making fun of him.

“My hands were shaking. Shaking. My mind was completely racing. I didn’t even call June because I knew I needed to act fast. So what I decided to do is call him preemptively and cut this off at the pass. So I called him and I’m like, ‘Hey, you’re about to get an email from me.’ And then I tell a lie that is so shocking. Oh, by the way, June was on the email, too; I had sent it to both of them. That’s important to know.

“So I go, ‘Listen: I am in a potentially verbally abusive partnership with June and I really want to use your song, that’s the bottom line. But June gets so upset if I don’t run every little thing by her. So for the outcome to be that we use your song, I had to downplay it and act like I was shocked by your behavior, because sometimes she responds like a contrarian.

“And he goes, ‘What?’ And I’m like, ‘I know, you wouldn’t know it to meet her because she’s so nice. But not behind closed doors. And a lot of people don’t know that, so I hope that stays between us’ — because I didn’t want him to tell anyone! (laughs) I completely threw her under the bus in such an upsetting, unacceptable way. And while we were talking, I could tell he was reading the email and he could tell I was full of (it) but was gracious enough to be like, ‘Uh, OK.’ And I was like, ‘Do with that what you will, I’m sorry you had to get in the middle of our dynamic, but I had to do it in order to make a point to help you. I had to basically speak ill of you to help you.’ I think he knew the truth immediately.

“And that was that. I never spoke to him again. Never saw him again. Avoided him at all costs. It was awful! We weren’t close, but this guy didn’t deserve this. So this is a long overdue apology to him and I hope he can find it in his heart to forgive me, but I understand if he can’t.

“After I got off the phone with him I called June and I said, ‘I have some bad news, I had to sell you out.’ And she goes, ‘What?!’ She was horrified! And I was like, ‘Look, it was a moment of utter madness.’ She was very disturbed. But I was like, ‘You are my best friend and essentially I need you to corroborate this.’ And she was like, ‘Oh my God.’ She was rolling her eyes, like, I can’t believe you did this. It was shameful, but she was able to laugh it off. She was like, ‘Your mind is so sick and deviant, that that’s what you came up with that quickly.’

“We are still best friends to this day all these years later.”

It probably isn’t uncommon that when someone lands a big break, people might be a little insensitive with their timing and start asking for favors right off the bat.

“I didn’t want to say that, these are your words (laughs).

“I’ve both made these asks and been on the receiving end of asks. A couple times I’ve asked for a favor above my station, but I try to wait the appropriate length of time and just kind of let someone live in the happiness of their moment. But, you know, it’s a tough business. And having been in it this long, I also totally get it. Everybody has to hustle. It’s all about favors and I actually love to help people, which is ironic about this, because I’m like, God, if I can do anything to help someone, it feels great because it’s such a hard business.

“The thing with favors, Oprah said this: If you say yes once, your brain tells you that they’ll be satisfied with that and never ask you again. And actually it’s quite the opposite, it opens the floodgates and they think they can ask you for anything.

“But also at that time in my life, I was just kind of bratty and entitled (laughs). There’s no other way around it. It was quite humbling. It was like: You have gotten too big for your britches, and based on nothing. Your parents did not raise you this way. My parents would have been horrified to hear this story. Horrified.

“But I like to help people, is my bottom line, so I changed my ways.”

“It’s a ritual that I have never one time not done. It should be a lesson for everyone.”