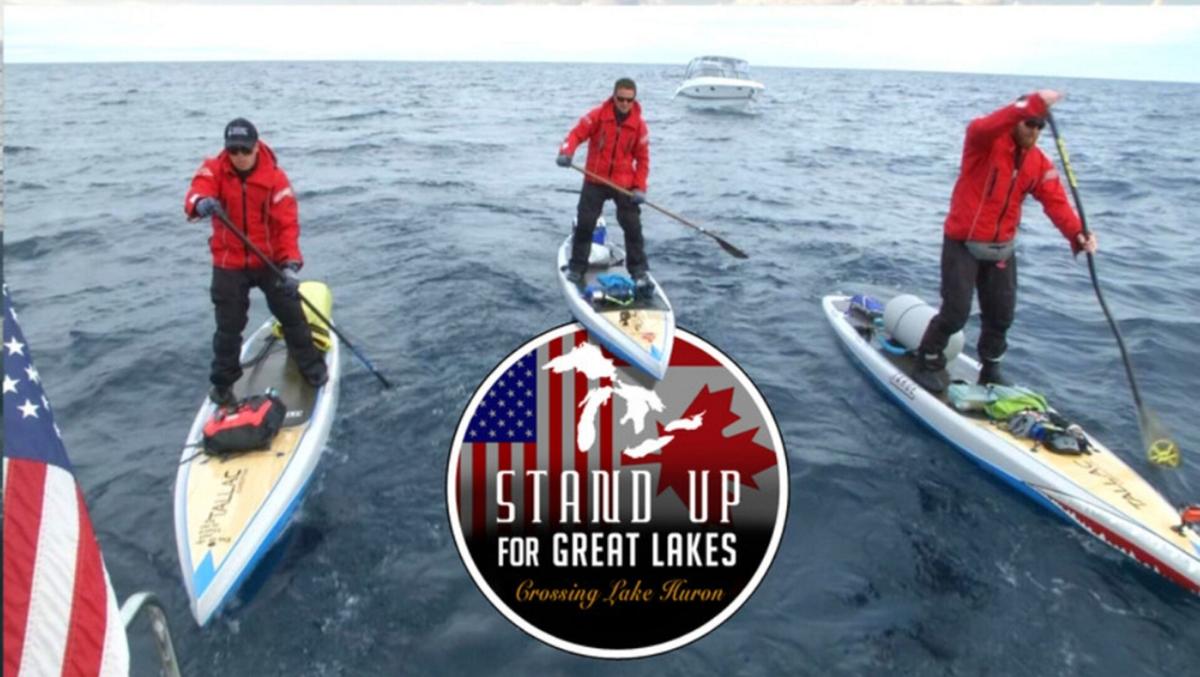 “Crossing Lake Huron” is one of the five films in the “Our Great Lakes Connection” film block of the Snowtown Film Festival. Fresh Coast Film 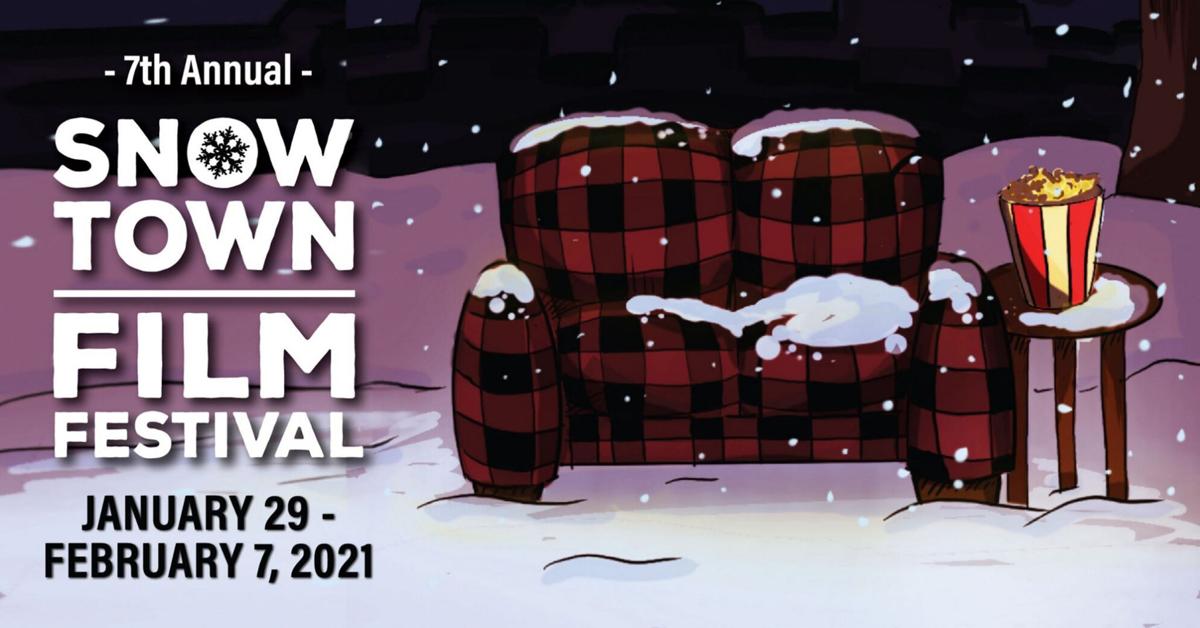 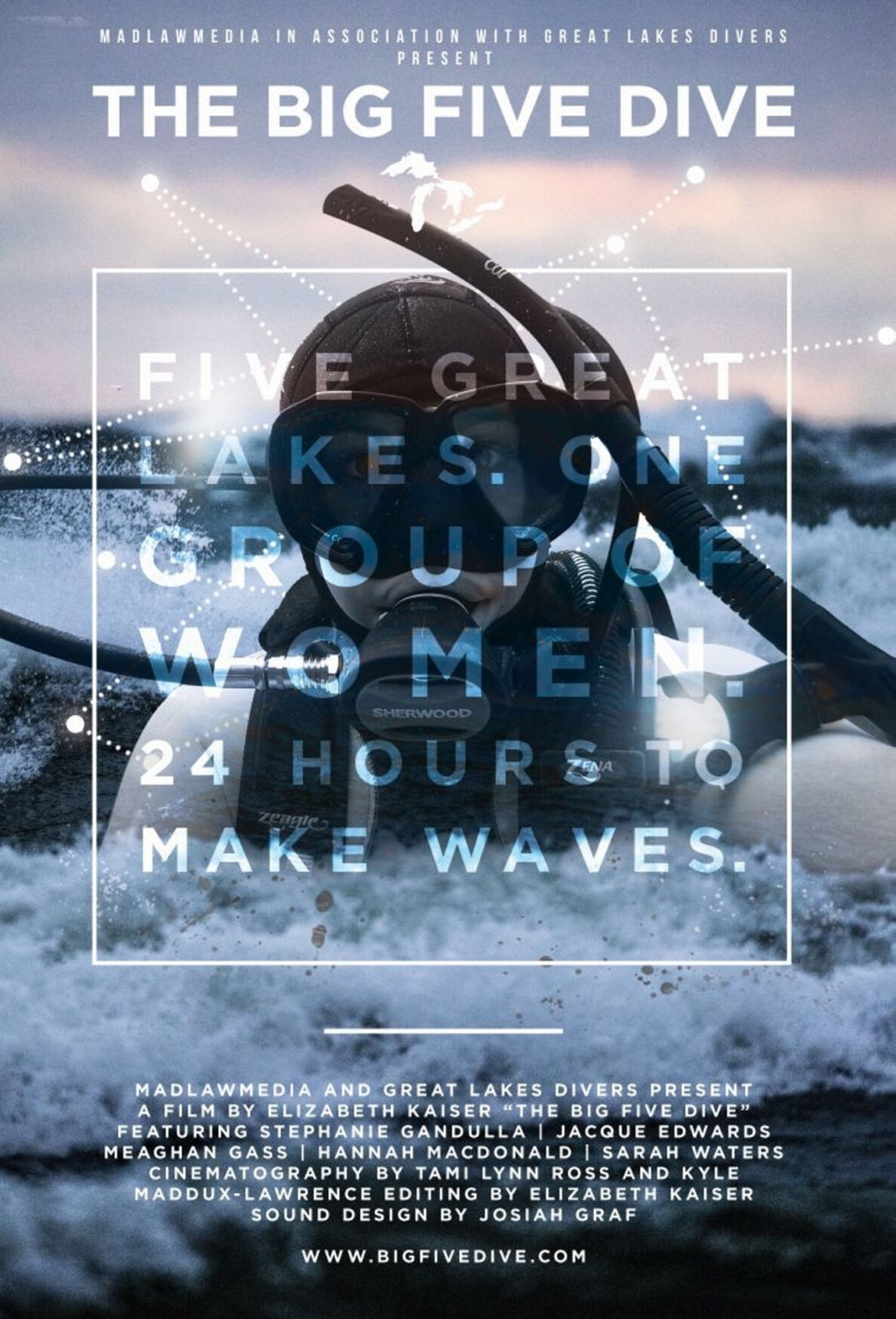 “The Big Five Dive,” one of the films in the “Our Great Lakes Connection” block, documents a group of women who attempt to dive one historic site in all five Great Lakes within 24 hours. / Madlaw Media 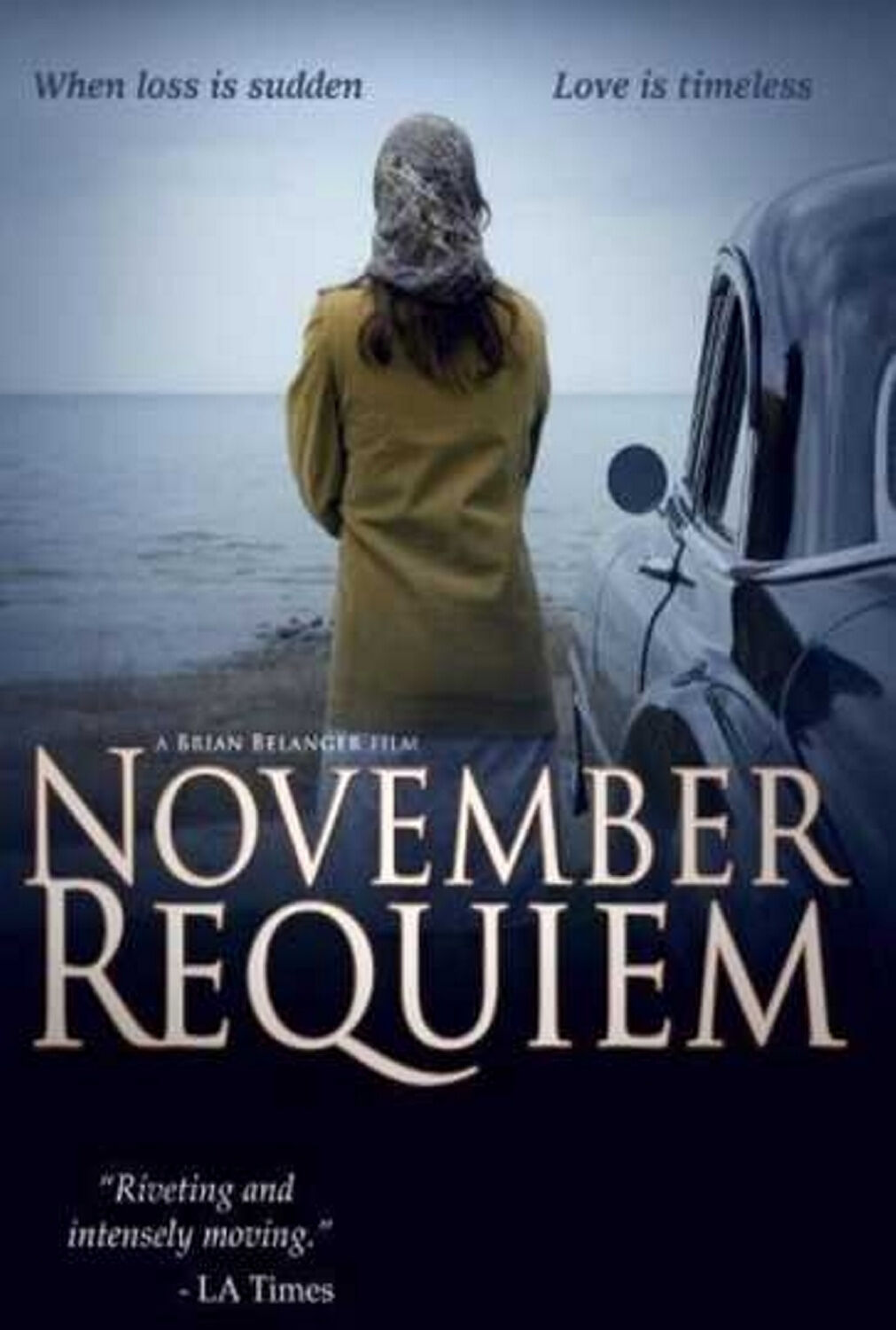 The hour-long film “November Requiem” tells the story of the November, 1958 sinking of the Carl D. Bradley on Lake Michigan from the viewpoint of families. Its part of the “Our Great Lakes Connection” film block. / Brian Belanger 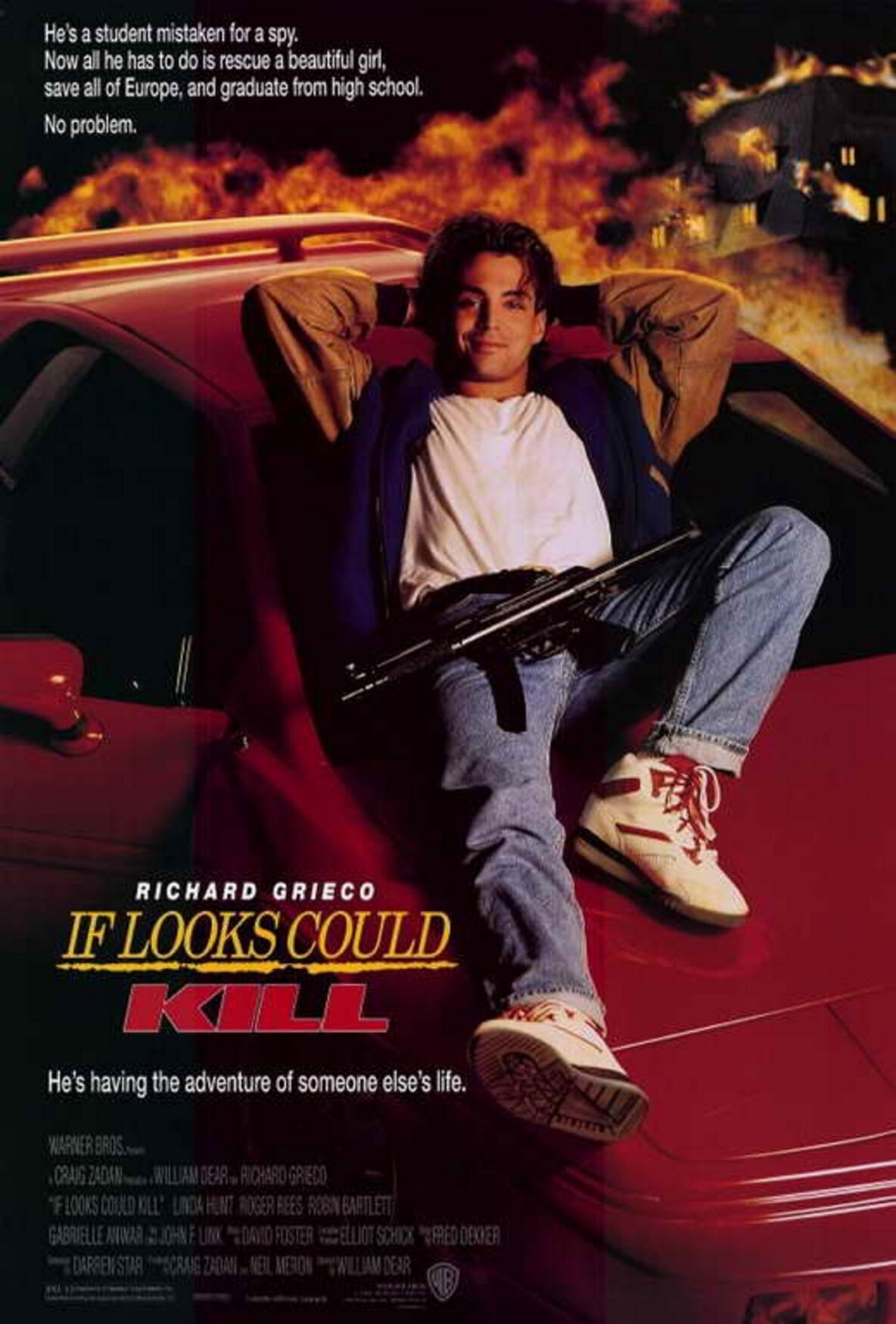 Watertown native Richard Grieco is scheduled to take part in a Q&A session at the Snowtown Film Festival following the 6 p.m. Jan. 30 showing of his 1991 film, “If Looks Could Kill.” / Warner Bros.

“Crossing Lake Huron” is one of the five films in the “Our Great Lakes Connection” film block of the Snowtown Film Festival. Fresh Coast Film

“The Big Five Dive,” one of the films in the “Our Great Lakes Connection” block, documents a group of women who attempt to dive one historic site in all five Great Lakes within 24 hours. / Madlaw Media

The hour-long film “November Requiem” tells the story of the November, 1958 sinking of the Carl D. Bradley on Lake Michigan from the viewpoint of families. Its part of the “Our Great Lakes Connection” film block. / Brian Belanger

Watertown native Richard Grieco is scheduled to take part in a Q&A session at the Snowtown Film Festival following the 6 p.m. Jan. 30 showing of his 1991 film, “If Looks Could Kill.” / Warner Bros.

WATERTOWN — The seventh annual Snowtown Film Festival will feature a new approach and a look to new horizons.

The new, temporary approach during these pandemic times has created a virtual film festival. Working with the online film festival platform Eventive, the Snowtown Film Festival will present over 50 short films, official selections and panel conversations.

Film festival passes allow for access to all films and live streaming panels. The cost is $12, with a 20% discount for active-duty members of the military.

In addition to providing nearly double the content, this year’s virtual format allows festival organizers to extend the festival from two to 10 days — Jan. 29 to Feb. 7.

Pass holders will have access to Eventive and the festival through AppleTV and Roku or directly through the internet.

This year’s festival will open with a Facebook Live preview party for the public at 6 p.m. Jan. 29. Festival organizers will walk through the new virtual format and provide a rundown of this year’s programming.

Films will go live to pass holders on Jan. 30, culminating in a 30th anniversary screening of, “If Looks Could Kill,” starring Watertown native Richard Grieco, at 6 p.m. It will be followed by a Q&A discussion with Mr. Grieco at 8 p.m., with participants having a chance to ask questions.

In lieu of the crowd-favorite flannel casual red carpet reception, pass holders are encouraged to submit “flanneled” selfies from their couches for a chance to win prizes.

Short films were selected by festival organizers from over 565 submitted from over 64 countries.

There are nine short film blocks, including, “Our Great Lakes Connection.”

A U.S. National Marine Sanctuary, managed by the National Oceanic and Atmospheric Administration, is a zone within United States waters where the marine environment enjoys special protection. The program began in 1972 in response to public concern about the plight of marine ecosystems. NOAA has established an advisory council for a proposed sanctuary in Lake Ontario.

Northeast Michigan’s Thunder Bay National Marine Sanctuary, located on Lake Huron, is estimated to contain over 200 shipwrecks. Established 20 years ago, it is the only freshwater national marine sanctuary in the U.S.

“We, as a sanctuary community, have inspired interest in designations across the Great Lakes,” Stephanie Gandulla, maritime archaeologist and spokeswoman for the Thunder Bay National Marine Sanctuary said in a phone interview from Alpena, Mich.

“We’re not just a field office out of sight, out of mind,” Ms. Gandulla said. “With the staff and volunteers, we truly are integrated into a part of the community.”

That interaction ranges from volunteering for other organizations to hosting programs about the sanctuary at local schools. The sanctuary’s film festival is one of their biggest outreach events.

“But I would say it’s our broadest outreach event,” Ms. Gandulla said. “Just the nature of a film festival encourages lots of different partnerships with local businesses, other cultural institutions in the community, other theaters, libraries, filmmakers and student filmmakers.”

The five films in the “Our Great Lakes Connection” block of Snowtown Film Festival selections, and their description:

n “The Big Five Dive”: A group of women attempt to dive one historic site in all five Great Lakes within the span of 24 hours. 27 minutes.

n “Crossing Lake Huron”: Three men attempt to cross Lake Huron from the Thunder Bay National Marine Sanctuary to Tobermorey, Ontario, on stand up paddle boards. The 90-mile open water crossing travels through Shipwreck Alley and some of the most treacherous waters in the world. 30 minutes.

n “November Requieum”: This film tells the story of the 1958 maritime tragedy of the sinking of the limestone freighter Carl D. Bradley from the viewpoint of the families of Rogers City, Mich., home to 23 of the ship’s crew. The ship, with 33 on board, was lost during a brutal Lake Michigan storm. 56 minutes.

Ms. Gandulla, who can be seen in the films “Crossing Lake Huron” and “The Big Five Dive,” said “Project Ship Hunt” is a powerful film, especially for the Thunder Bay sanctuary.

“It’s an amazing documentary made in 2011,” she said. “Even though it seems a bit old, we use it all the time. We play it in our visitors center. It’s a great documentary to inspire education.”

Ms. Gandula was on the crew of the safety boat for the filming of “Crossing Lake Huron.”

“The rules they set for themselves is that they wouldn’t take any help,” Ms. Gandulla said. “They succeeded. We were there just in case.”

Snowtown Film Festival organizers plan to make the partnership with the Lake Huron sanctuary and its film festival an annual affair.

“We hope north country filmmakers will be encouraged to explore Lake Ontario with the added exposure and audience this partnership could provide,” said Kylie Peck, Snowtown Film Festival board member and president and CEO of the Greater Watertown-North Country Chamber of Commerce.

The Thunder Bay sanctuary, Ms. Gandulla said, is known for its diversity. Its wrecks include schooners, freighters and steamers.

“Any vessel that worked the Great Lakes is found here in Thunder Bay,” she said. “We don’t have any war vessels like you guys do on Lake Ontario. I’m a little jealous of that.”

“We operate from the philosophy that people need to understand and connect to what we’re asking them to protect. What better way to connect with something than visiting it? You don’t need to be a deep sea diver to access the historical sites. You can snorkel to a lot of them.”

The sanctuary also has a visitors center with about 11,000 square feet of exhibits for all ages.

Katie Malinowski, vice chairwoman of the proposed Lake Ontario National Maritime Sanctuary advisory council, said the contacts in Thunder Bay have been beneficial for the local group. She noted that there’s another marine sanctuary in the works for Wisconsin.

“Wisconsin will likely get finalized before us, but we’re anxious to get going, get our name out there so local people will realize the work we’re doing,” Ms. Malinowski said.

She said the film festival is a creative way for shedding light on the Thunder Bay sanctuary and to show the potential for the proposed local sanctuary.

“Most of us aren’t divers,” Ms. Malinowski said. “We aren’t going to get out underneath the water and see any of these shipwrecks up close and personal. This is a way to get a glimpse into that and learn about all that exists on the lake bottom. I’ve lived in this area pretty much my entire life, and I’m learning things at every meeting we have.”

Ms. Malinowski is executive director of the Tug Hill Commission, but she is on the Lake Ontario sanctuary advisory council as a private citizen.

Ms. Malinowski said the Lake Ontario council thought it important to add a section that focuses on economic development to its draft management plan.

“We see a lot of potential to bring tourism and to boost economic development in the area once it’s finalized and designated,” she said of the sanctuary plan.

There has also been a proposal to extend the Lake Ontario Marine Sanctuary to the St. Lawrence River.

“We’re going to put a couple of different options on the table,” Ms. Malinowski said.

“One is staying more in the lake and the other option is going up the St. Lawrence River a bit and we’ll see what the public comments come back as and make a determination after that. Because this is supposed to be a locally driven process.

“I don’t think the council, and certainly not NOAA, want to get out too far in advance of local people. We’ll see about how people in the area feel about both of those options and go from there.”