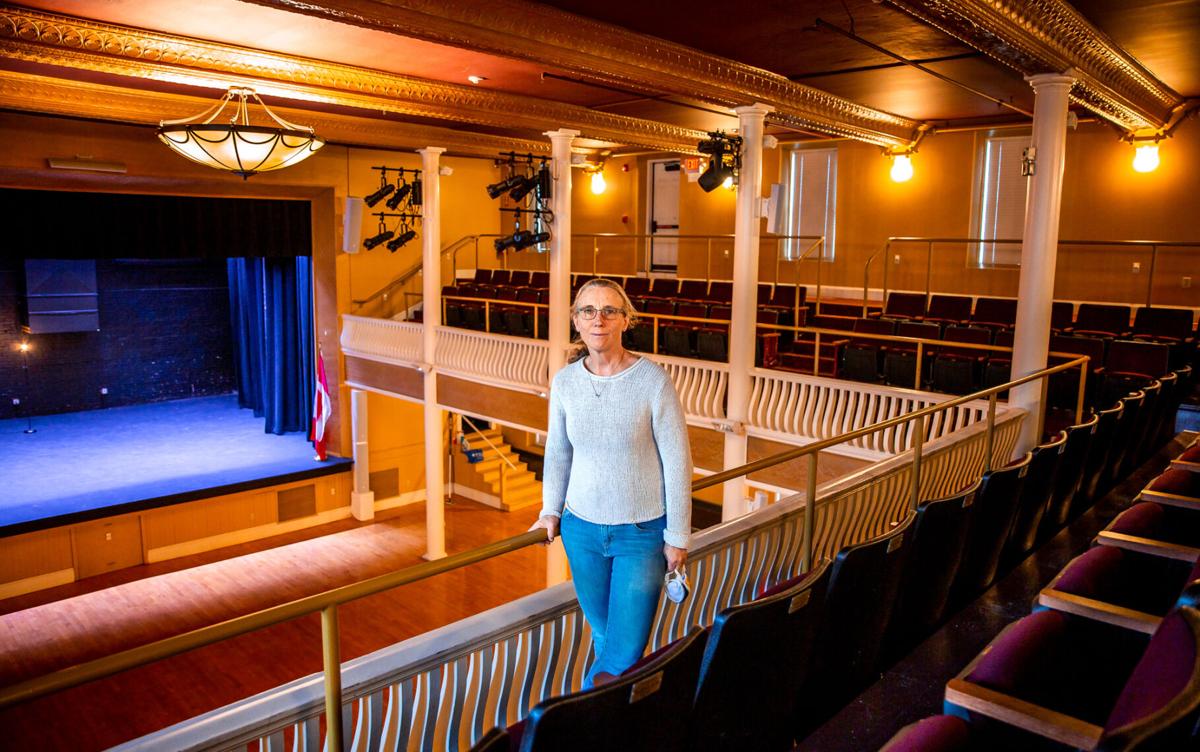 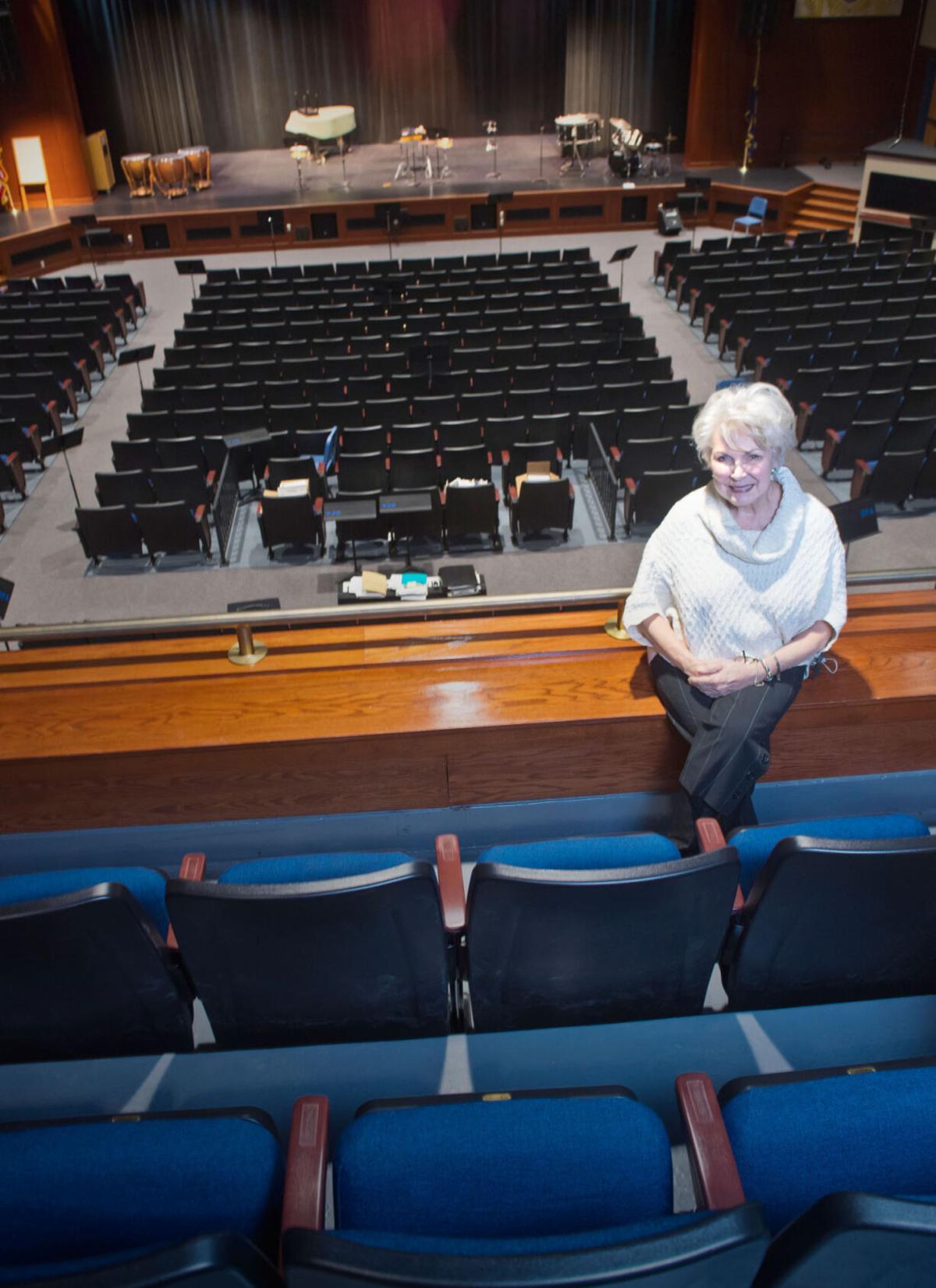 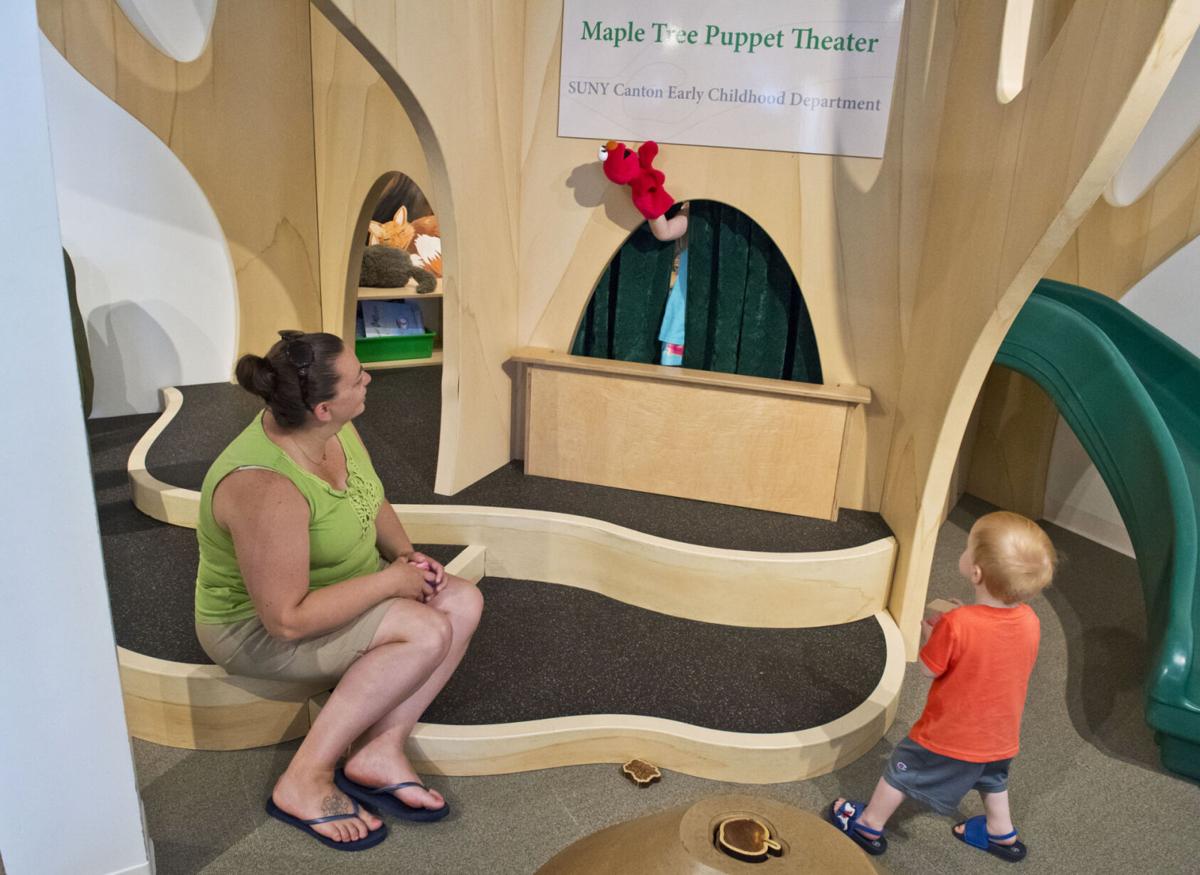 Ava Connelly performs a puppet show for her mother Kelly and brother Carter in the North Country Children’s Museum Maple Tree Puppet Theater on July 3, 2019. The museum in Potsdam may apply for funds in the Shuttered Venues Grant, according to Director Sharon Vegh Williams. The museum closed down in March during the state lockdown and took advantage of the PPP program. The museum opened back up in September. Christopher Lenney/Watertown Daily Times 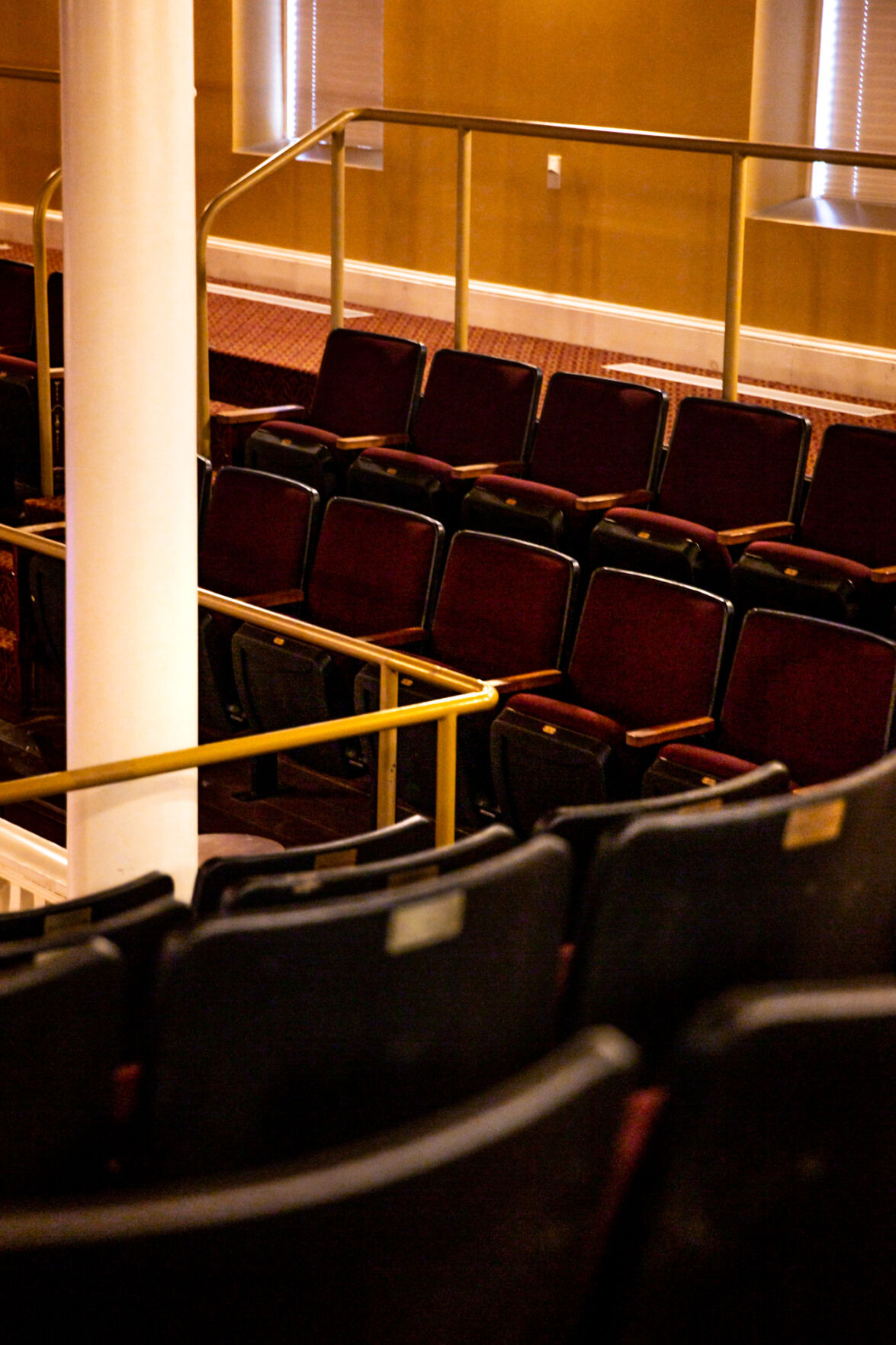 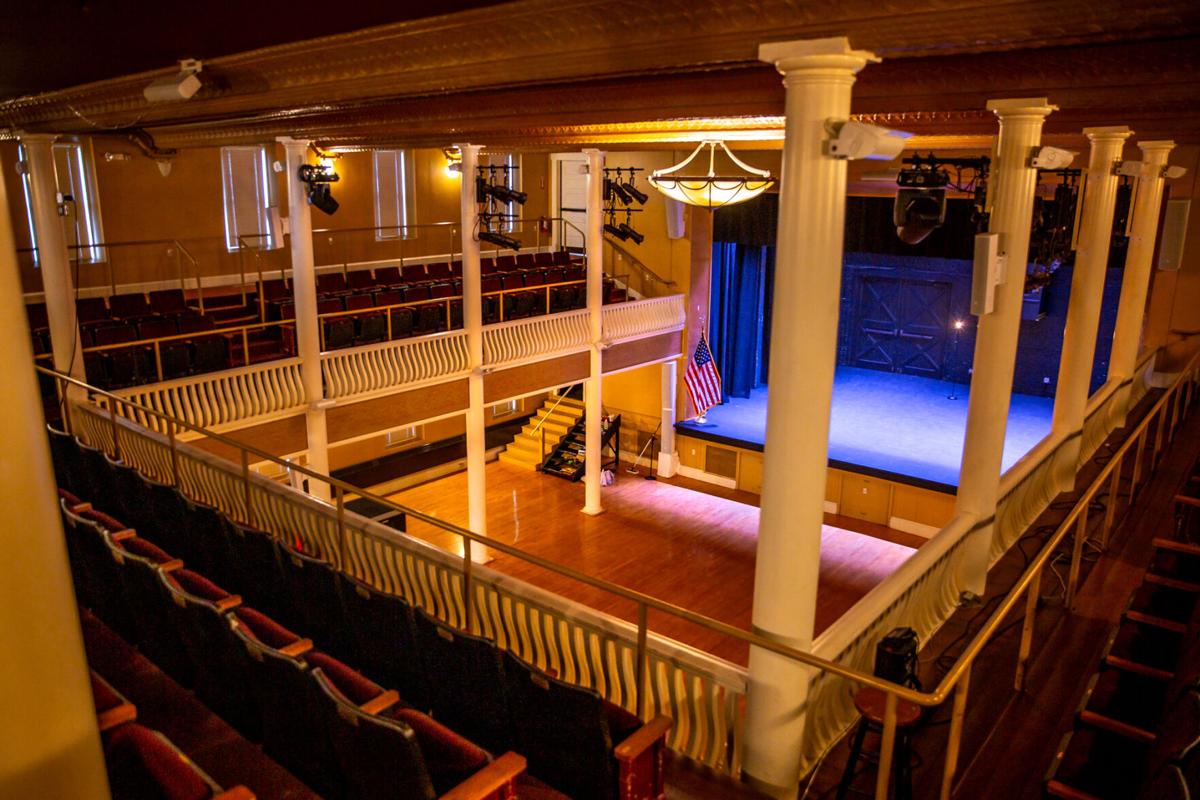 Seats have been empty since March at the Clayton Opera House. Kara Dry/Watertown Daily Times

Live entertainment venues that went dark last spring with COVID-related lockdowns and lockouts saw some signs of hope in late December with the passage of the coronavirus relief package signed into federal law.

The $900 billion in relief includes the Save Our Stages provision, providing $15 billion to independent venues such as live music stages, movie theaters and museums shuttered by the pandemic.

The Save Our Stages Act was originally promoted by the National Independent Venue Association, which says 2.1 million emails were sent to elected officials expressing their support for the provision. The relief package is now known as the Shuttered Venues Grant.

“Independent venues were some of the first establishments to close down and will likely be some of the last to open,” Sen. Klobuchar said in a news release. “I refuse to sit by and let the music die, which is why I was proud to introduce the bipartisan Save our Stages Act. This funding will get small entertainment venues the help they need to make ends meet and serve our communities for generations to come.”

Officials at local entertainment venues are waiting for more information on the program. As of Thursday, an application from the SBA wasn’t yet available for venues.

“There is a potential that we could get some money, but we’re not sure what that’s going to look like and when the money is going to run out,” said Julie R. Garnsey, executive director of the Thousand Islands Performing Arts Fund, which oversees operations at the Clayton Opera House.

That $15 billion could disappear in a hurry, Mrs. Garnsey said.

“When you think about that, there’s a lot of arts organizations nationwide that are going to completely go out of business because of this pandemic,” she said.

According to data from Sen. Klobuchar, 90% of venue owners, promoters, and bookers reported they are at risk of closing without additional financial assistance with an estimated $9 billion in losses should ticket sales not resume until later this year.

Mrs. Garnsey, who hopes to apply in the second round of funding, said that because of canceled 2020 shows, the opera house lost 75 percent of its income last year, but it could have been much worse, if not for loyal patrons.

“Our patrons typically donate every year anyway,” she said. “They still donated last year. We got several new people who came out of the woodwork because their message was, ‘We want to see you open your doors again.’”

Many of the patrons who purchased tickets for canceled shows last year donated the cost of those tickets to the opera house instead of asking for a refund.

“That was pretty huge,” Mrs. Garnsey said. “People really supported us. We’ve been fortunate. I’m so grateful to all the people who have stepped up and helped us in a year that was tough for everybody.”

But the loss of ticket revenue wasn’t the only financial hit at the opera house. Revenue from advertisements in would-be program brochures dried up and four opera house weddings were canceled. After benefitting from last spring’s Paycheck Protection Program, Mrs. Garnsey was forced to furlough her staff of three from the beginning of June to the end of October while she kept working.

“We brought them back with anticipation that we’re going to open our doors, hopefully in the first six months of 2021,” she said. “We do have a season planned with flexibility, knowing we may have to push things back.”

But a wild card is guidance, from the state, on allowed crowd sizes at public events such as concerts and sporting events; numbers that are tied to COVID cases. “That’s the biggest frustration,” Mrs. Garnsey said. “Right now, there’s no guidance, not even, ‘We’re going to let you do 25 percent capacity’ or anything like that. That’s one of the biggest frustrations that I think all performing arts centers have.”

But even 50 percent capacity would be a losing proposition for concerts at the opera house.

“We’d have to reorganize our schedule if we’re told we can only do 50 percent capacity, because we’d lose money on every show,” Mrs. Garnsey said. “We know that when it opens, we’ll have to be able to do near full capacity. With the vaccine and being hopeful this surge will settle down a bit, we anticipate that probably isn’t going to be until late June or early July.”

Hopeful for a February show

Sally F. Palao, administrator of Ogdensburg Command Performances, said her organization was able to get a few 2020 shows in before the pandemic closed things down.

“We have not had any income since last March,” Mrs. Palao said. “So we would qualify for the first 14 days of the (Save Our Stages) grant period. But they haven’t released anything as far as when the 14 days start, and the actual grant application.”

Like the TIPAF, the OCP has had several patrons who donated the cost of unseen shows last year back to the organization.

“They’re backing us very much,” Mrs. Palao said. “Out of my season ticket holders, I’ve had an 86 percent renewal rate from the year before.”

But as she awaits guidelines on crowd sizes, OCP has delayed the selling of tickets, even though a show has been scheduled: Feb. 27, for “Forever Young,” “an exciting look at the greatest pop, rock, and country hits of all time.”

“Because our mission is to keep theater affordable for an area that is economically challenged,” Mrs. Palao said. “When I book, say a big musical like ‘South Pacific,’ I know that the revenue I bring in from tickets will not pay for ‘South Pacific.’ That’s why it’s important I get donations. I write grants and we do fundraisers to make up the difference.”

The OCP didn’t have to furlough anyone during the pandemic because Mrs. Palao is its only employee.

“The only time I pay people is when we have a show in town,” she said.

Those workers range from a lighting designer to a technical director. Mrs. Palao does the work ranging from office duties, booking and acting as artistic director.

“I have had some very generous people give donations because they really believe in what we do,” she said.

Live shows at the Lake Placid Center for the Arts, like those at OCP, aren’t designed to be a main funding source, said LPCA executive director James Lemons. In addition to that “presenting” series, LPCA also has a visual arts and an arts education “pillar.”

“While we took hits in the other two pillars, fortunately those hits weren’t as intense as they are in the presenting ring,” Mr. Lemons said. “Our model is a little different from some other presenting organizations. We don’t rely on that ticket sale income to make profits. We cover our cost through other venues.”

Shows for the 2021 season have been pushed to October, Mr. Lemons said.

“It’s a 50-50 shot whether that happens, or not, depending on where we stand in the summer,” he said.

The LCPA has made it through the COVID crisis without furloughs and had assistance from the PPP to allow the staff of nine to keep working, but from home. But a couple of part-timers were furloughed, Mr. Lemons said.

“Because our income streams are really diversified, and we don’t tend to put all of our hats in the same bucket, we were able to mitigate some of the potential losses,” Mr. Lemons said. “It’s challenging, but we’re making it through.”

Steve Karon, director of the Sci-Tech Museum in Watertown, said the inclusion of museums in the law is in large part due to activity by the American Association of Museums, which he said should be commended for its work.

But the Sci-Tech Center won’t be able to take advantage of it. Mr. Karon said the Shuttered Venues Grant funding only allows museums that have performance or program rooms with “fixed” seating, among other requirements — “basically a specific performance facility with a daily presentation schedule”; something the Sci-Tech Center does not have.

The North County Children’s Museum in Potsdam may be applying for funds in the Shuttered Venues Grant, said director Sharon Vegh Williams.

The museum closed down in March during the state lockdown and took advantage of the PPP program. It opened back up in September.

Ms. Williams said the museum did well with grants, donations and other funding.

“We were able to meet the needs of the community and fulfill our mission,” Ms. Williams said. “But it’s still a challenge and will be until the pandemic is under control. We feel confident that with the community support we have, we’ll be able to move forward.”

No paid employees, no grant

Concert series such as the Norwood Village Green Concert Series aren’t eligible for the Shuttered Venues Grant because the programs are run by volunteers, not paid employees.

“As far as I can tell we are not eligible,” said Joseph M. Liotta, co-founder of the annual Norwood series. “This is not a bad thing, because instead of putting our limited but adequate resources in administration we are able to do more with programming.”

“We have put our down time to other uses like completing our lighting project and using the new lighting to enhance the outdoor seasonal celebrations like Halloween, and this just-completed holiday season,” Mr. Liotta said. “We’ve also used this time to bring up the standards of the rest rooms on the Village Green in a financially responsible way in cooperation with the village of Norwood.”

Mr. Liotta said “excellent progress” has been made in funding for the 2021 season.

“We have 17 events planned and are ready to present some of them to all of them as the pandemic dictates,” he said. “We’re being conservative and prepared to resume at the same time. As with everyone else, we remain flexible.”

The Orchestra of Northern New York, which also canceled the remaining of its 2020 season last spring, is researching if the organization would be eligible for the Shuttered Venues Program, according to Kathy Del Guidice, ONNY executive director.

Jeffrey A. Szot, owner of JS Cinemas in St. Lawrence County, said the Shuttered Venues Grant program sounds like something that would help his company, but he was seeking more info on it.

“There’s nothing on the SBA website and I’ve talked to some other people in the industry and we haven’t seen any applications or an entry portal anywhere,” he said.

JS Cinemas’ three indoor movie theaters — one in Potsdam, Massena and Canton — have been shuttered since March. The company’s 56 Drive-In in Massena was allowed to open under pandemic guidelines.

“My accountants are reviewing that right now,” he said. “We don’t have a deadline because we can’t find any documentation. That said, having a drive-in open might complicate that 90 percent a little bit.”