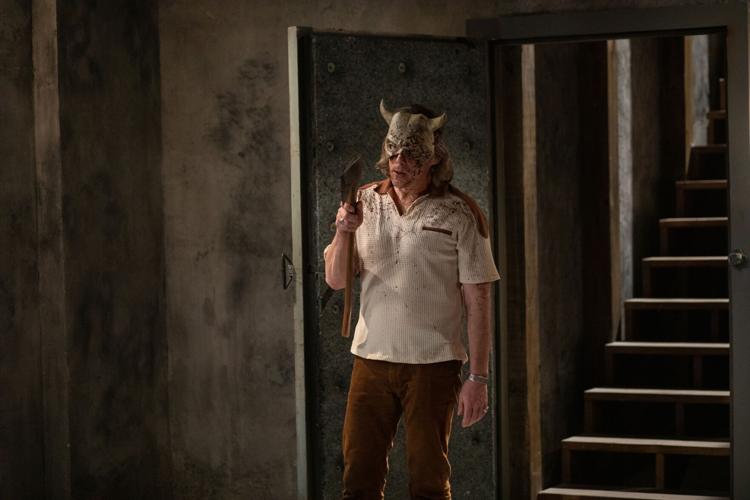 Ethan Hawke stars as The Grabber in the horror film “The Black Phone,” directed by Scott Derrickson. Fred Norris/Universal Pictures/TNS

Mason Thames stars as Finney Blake, a kid just trying to make it through middle school in 1978 Denver, in “The Black Phone.” Universal Pictures/TNS

Ethan Hawke stars as The Grabber in the horror film “The Black Phone,” directed by Scott Derrickson. Fred Norris/Universal Pictures/TNS

Mason Thames stars as Finney Blake, a kid just trying to make it through middle school in 1978 Denver, in “The Black Phone.” Universal Pictures/TNS

Joe Hill grew up in an old house in Bangor, Maine, the basement of which was home to a disconnected phone he found “creepy and unsettling.”

It served as the inspiration for Hill’s short story “The Black Phone.”

“It didn’t make sense for a phone to be in a basement with a dirt floor and crumbling concrete walls,” Hill says in the production notes for the stress-inducing big-screen adaptation of “The Black Phone.” “As a kid, the worst thing I could imagine was that phone ringing.”

Well, it makes a little sense to us — that’s exactly how we would have pictured a basement of a house belonging to Stephen King.

If you haven’t figured it out, Hill is the son of the horror-fiction master and is, apparently, a chip off the old spooky block.

“The Black Phone” was included in Hill’s 2005 bestselling short story collection, “20th Century Ghosts,” and it caught the attention of writer-director Scott Derrickson before he even knew of the familial connection.

With the help of co-writer C. Robert Cargill — with whom Derrickson has collaborated on the “Sinister” (2012) and “Doctor Strange” (2016) — the filmmaker has turned “The Black Phone” into a feature-length story that pulls you in and fills you with the desired dread, even if, like most horror movies, it also irritates you with character choices here and there.

Set in the northern part of Denver in the late 1970s, “The Black Phone” concerns a mysterious figure who is believed to be snatching young teen boys off the street, earning the kidnapper the moniker “The Grabber.”

The Grabber is, we learn early on in “The Black Phone,” an amateur magician with a van filled with black balloons. He’s played adequately disturbingly by “Sinister” alum Ethan Hawke.

After his latest classmate is abducted, 13-year-old Finney (Mason Thames) asks his younger sister, Gwen (Madeleine McGraw), if she thinks the police will find him.

Not the way they hope to, she answers.

Her opinion on this matters because she is experiencing dreams that seemingly offer visions of The Grabber. Talk of these dreams infuriates her alcoholic, sometimes-abusive father (Jeremy Davies of “Justified”) — her late mother had similar gifts, and he doesn’t want that future for his daughter — but they will be paramount after Finney is taken.

In the dingy, soundproof basement of The Grabber — who wears disturbing masks when he visits the boy — is little more than a mattress, a toilet, a single, out-of-reach window and, yes, a disconnected black rotary phone.

When it rings, Finney is startled and confused, but he soon learns the phone offers a means to communicate with former residents of that terrible room — residents who may possess information that will help Finney free himself before what has happened to them happens to him.

Without having read the short story, it’s hard to know how much of the credit belongs to Hill and how much to Derrickson and Cargill, but, regardless, the screen version of the story is peppered with nice little meaningful touches. For instance — and even though the payoff feels a little forced — that we see Finney getting bullied by schoolmates early on in “The Black Phone” will prove to be important.

“The Black Phone” also benefits from its two main young cast members. Newcomer Thames is fairly compelling, while McGraw (“Ant-Man and the Wasp”) is a firecracker as Gwen, not bashful about mixing it up with her brother’s bullies — and using some very colorful language in the process — and desperate to do whatever she can to save him once the danger he faces is much more serious.

Aside from Hawke, the supporting cast doesn’t exactly move the needle, with the exception of James Ransone (“The Wire,” “Sinister”), who gets some laughs as the out-of-work, cocaine-using, Grabber-obsessed Max.

“The Black Phone” is a return to horror for Derrickson, whose credits also include 2005’s “The Exorcism of Emily Rose” and 2014’s “Deliver Us From Evil.”

He had been set to direct the sequel to “Doctor Strange,” but, reportedly, creative differences with Marvel Studios led to him leaving the movie that became this year’s uneven “Doctor Strange in the Multiverse of Madness” and freed him up to make “The Black Phone.”

One movie’s loss is another’s gain.

Derrickson has a mostly deft touch with “The Black Phone.” Crucially, he gets you to worry deeply for Finney even if you’re pretty confident he’ll find a way to put The Grabber in his rearview mirror.

Oh, and jump scares? Derrickson has a few — including at least two that may, in fact, lead you to leap out of your chair even if you suspect they’re coming.

“The Black Phone” does, after all, have the bones of a ghost story.

If you don’t mind a little dread and terror with your buttered popcorn, pick it up when it rings.