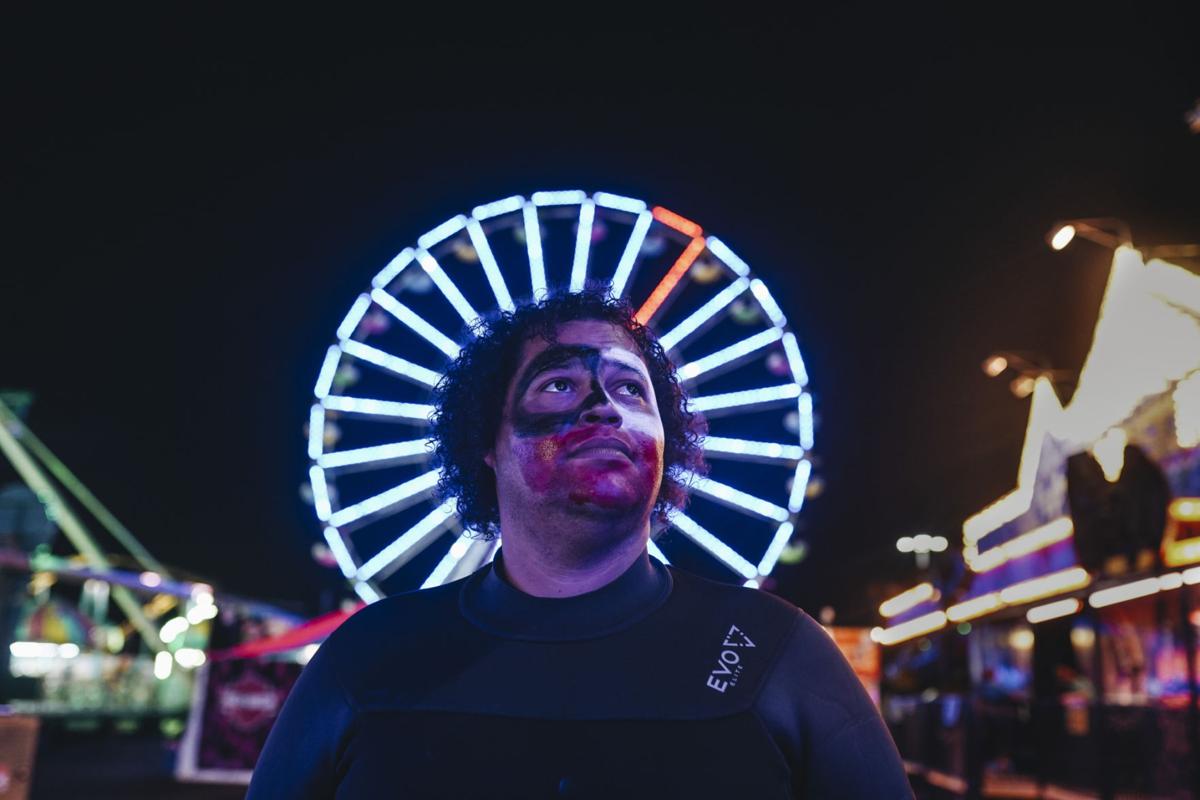 David Simmons, who grew up in Syracuse, is a dunk-tank clown. Here he works the Erie County Fair in Hamburg on Aug. 9. Libby March/New York Times 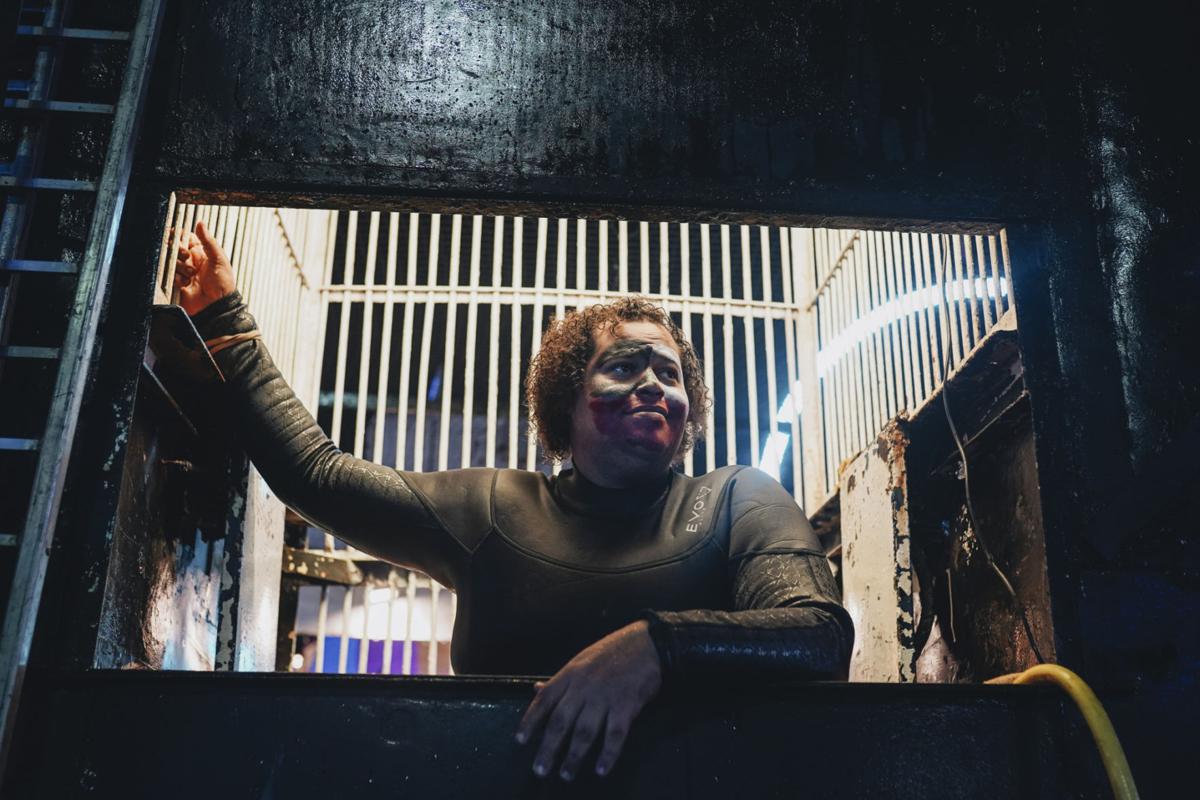 David Simmons, known as Patches the clown, in his dunk tank at the Erie County Fair in Hamburg, is looking for his next target. Libby March/New York Times 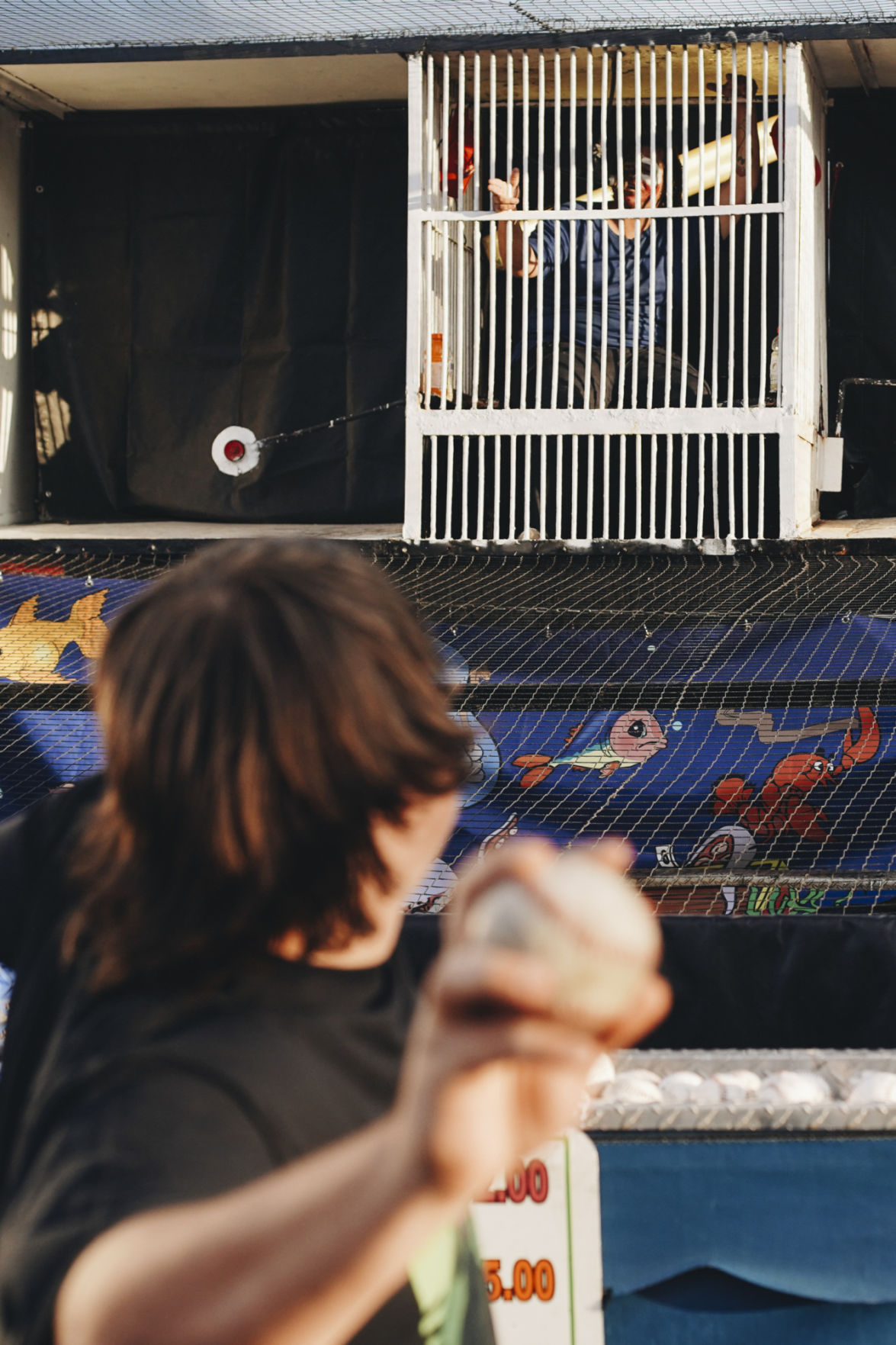 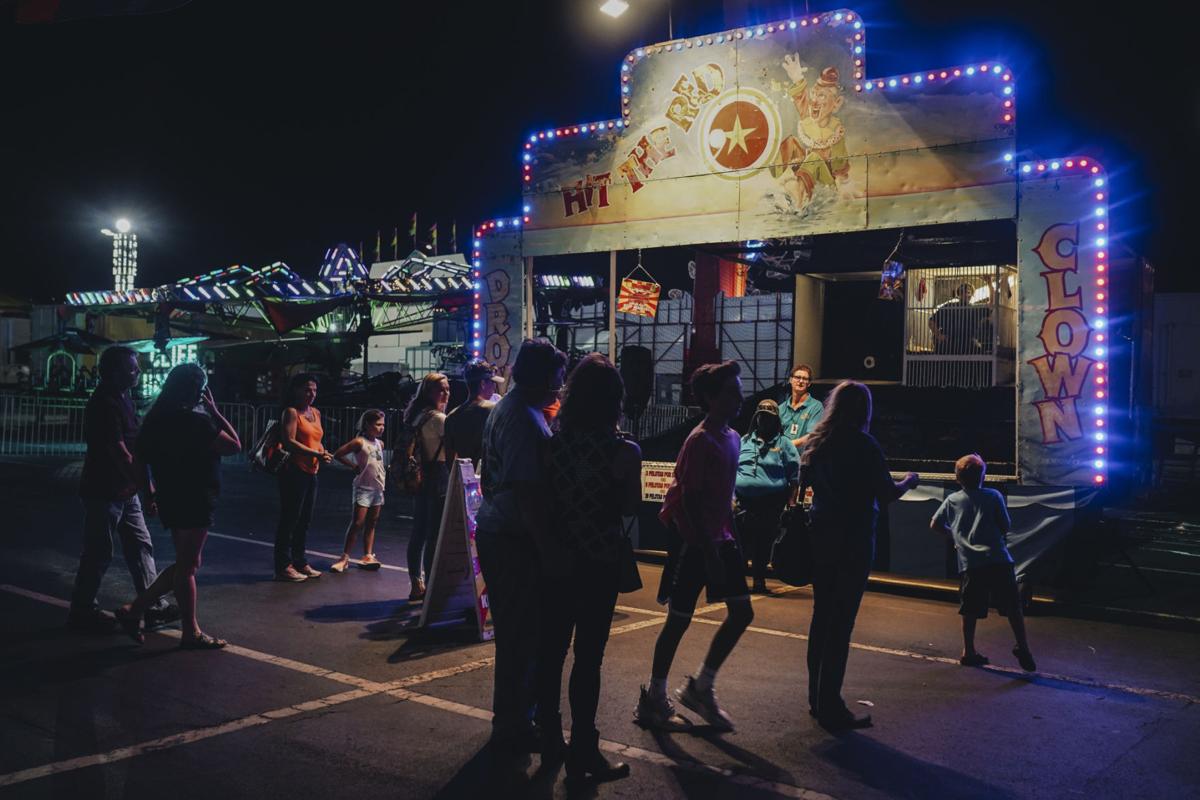 David Simmons, known as Patches the clown, heckles passers-by from his dunk tank at the Erie County Fair in Hamburg on Aug. 9. Libby March/New York Times 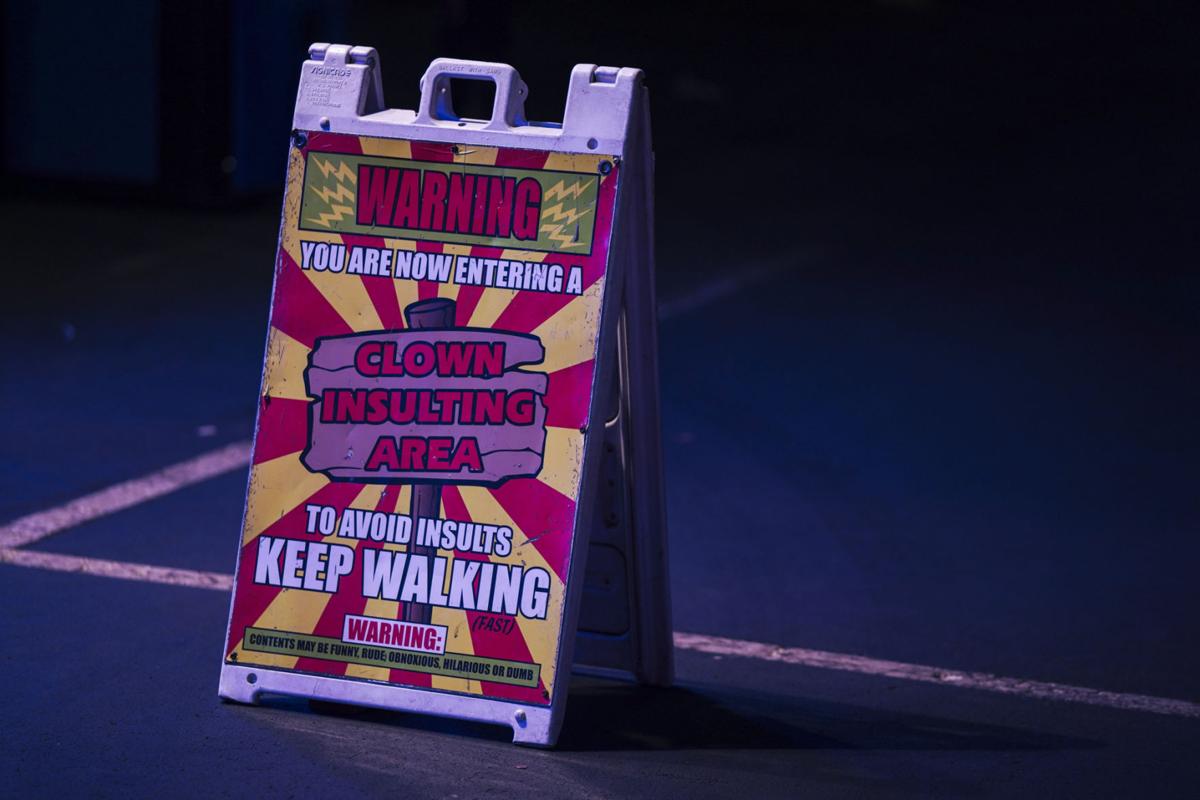 A sign at the dunk tank warns of a “clown insulting area” at the Erie County Fair in Hamburg. Libby March/New York Times

David Simmons, who grew up in Syracuse, is a dunk-tank clown. Here he works the Erie County Fair in Hamburg on Aug. 9. Libby March/New York Times

David Simmons, known as Patches the clown, in his dunk tank at the Erie County Fair in Hamburg, is looking for his next target. Libby March/New York Times

David Simmons, known as Patches the clown, heckles passers-by from his dunk tank at the Erie County Fair in Hamburg on Aug. 9. Libby March/New York Times

A sign at the dunk tank warns of a “clown insulting area” at the Erie County Fair in Hamburg. Libby March/New York Times

All David Simmons needs is a chuckle, a smile even, to set the hook and reel people back to his booth with more stinging insults — the weight of a man’s date or the cheap finish of a woman’s fake gold hoop earrings.

Simmons, who is 33 and known as Patches, is a dunk-tank clown. He makes a living by shouting insults at passersby at America’s small-town fairgrounds.

He is an anachronism in a wet suit and waterproof makeup, a gravelly voice with a microphone roasting people hard while they’re in his sightlines. His is a role that a more sensitive and inclusive world is now sweeping into the dustbin, not long after we did away with gawking at the bearded lady and two-headed boy.

Patti and Millie, his barkers, offer up revenge to the insulted: $2 for three baseballs and a chance to “drown the clown.” The game is simple, and as skills based as it gets for notoriously grifty carnival games. If you hit a tea-plate-size target with a ball, a lever beneath Simmons’ perch disengages, dropping his hulking frame into 150 gallons of lukewarm water.

“That’s the sound of making money,” Simmons said. “It’s like being laundry — you know what I’m saying — up and down, and by the end of the night, I’ll tell you, it feels like you done got the grater too.”

Dunk tank clowns, Simmons said, are fading away in a world where American are beginning to believe that cracking jokes about people’s skin color, size, poverty or intelligence is maybe not a good thing.

“They’re retiring left and right,” he said. “They’re being run out of town.”

Our taste for insults seems to be evaporating.

Tom Miller, a retired dunk tank clown known as Bozo, out of central Maine, said there was always one person at every fair he worked who got rankled by being insulted — and that those numbers rose in the last decade. Miller, now 65, said he tried to adapt toward the end of his 20-year career, struggling with both arthritis and new cultural norms.

“I miss the old days when I could weight-shame you,” he’d yell to someone trying to dunk him.

how it all started

The invention of the dunk tank clown shows just how far the line of what is considered appropriate for a society has moved over the decades.

The African Dip was a popular carnival attraction in the early 20th century. It featured a black man, often dressed as an “African savage” with a jungle backdrop, perched above a tank that sometimes resembled a caldron.

This was already a great progression forward from the African Dodger, an even more racist, flat-out violent attraction that can’t even be called a game. A 1924 help wanted ad, reprinted by the Jim Crow Museum of Racist Memorabilia at Ferris State University, lays out the duties of the dodger matter-of-factly:

“He just puts his head through a hole in a big piece of canvass and permits the aforesaid head to be used as a target by young men who toss baseballs,” the ad read.

There was no cage blocking those balls. Sometimes people cheated and threw rocks. Board games were created for anyone who couldn’t get to the fair.

The somewhat tamer African Dip drifted away from fairs around the 1950s, after states banned them.

The clowns took up their perch. And at least a little of this dynamic lingers.

David’s mother is white, and, in Syracuse, he said, kids accused him of not being black enough, calling him a “yellow bird.” When he moved south to Nedrow after a house fire, it was the opposite: He said he was called racial slurs daily. He ran away from home at 15.

Abrasive humor suited him as a defense, an age-old story shared by many people who use humor for a living. Take Jeff Ross, one of the comedy world’s preeminent roasters.

“For me it was self-defense, a survival mechanism growing up in Newark and working in my dad’s catering hall and being one of the only Jewish kids on the football team,” Ross, 53, said. “I always used comedy to break tension and defuse tense situations in real life.”

Simmons is the ruder of the two clowns who spent 11 days working the “Drown the Clown” sideshow at the Erie County Fair in Hamburg,which is about 13 miles south of Buffalo. It’s one of the biggest fairs in the United States but just a blip on the late summer and early fall fair season in the more rural stretches of America. For Simmons, Vermont would be next; Virginia after that.

Watching Simmons in action in the tank, it’s natural to flinch in 2019 — to scan the crowd to see if anyone is truly angry, to see which fairgoer is stomping off to the office or firing up a tweet to amplify their outrage.

But here on the ground his victims are mostly laughing, the white cheerleaders, the women he calls out to in Spanish — “Abuela! Abuela!” He goads black men about bad fades or for walking at the fair without any women by their side.

“It’s not black people that complain about black comics, it’s white people,” Simmons said. “It’s like, ‘You’re not even in the joke, go away.’”

Manuel Ortiz, a 37-year-old semiretired dunk tank clown from South Florida who goes by the name Baby Bozo in the cage, said the color of a clown’s skin, the sound of his voice, and which state he is parked in that night all determine what a clown can get away with.

Simmons and Ortiz agree: the farther north you get, the more sensitive the crowd is. And California? Forget it.

Simmons said his favorite fair is in Augusta, Ga., because he is basically uncensored. He doesn’t work the big, national motorcycle rallies, though.

White clowns can get in the most trouble, Simmons and Ortiz both said.

In 2014, a dunk tank clown at the Delta Fair in Memphis, Tenn., was fired when he used the term “nappy head” to insult a black woman and her family. Tanya Jones, the target of the clown’s insults, told a local television station at the time that she was humiliated.

Five years later, Jones, 42, said she hasn’t been back to the Delta Fair since.

“I still feel the same way I did then. It’s something that needs to go away,” said Jones, who lives in Atoka, Tenn. “I know you have to rile people and get them mad, but I think it crosses the line when you’re offensive, when you’re offending someone. So, yeah, I think it should go away.” She said the clown that insulted her in front of her children in Memphis was white.

That’s why, at the fair in Hamburg, Chris Angle, known as Jackels, from Fort Wayne, Ind., does the day shift. It’s when children and parents are more likely to be wandering about.

“I mean you’ve seen him, right? He’s Indiana white,” Simmons said. “I’m not like him. I’m a nighttime clown, and I’m a lot more vulgar. I’m the reason those signs were made — and that was to stop us from getting sued.”

That plastic sign warns passersby that they’re about to enter the “Insult Zone,” that something “funny, rude, obnoxious, hilarious, or dumb” may get slung their way, at their own expense.

Greg Chiecko, president of the Outdoor Amusement Business Association, said he polled his members about dunk tank clowns and that “most say they don’t know of any that still exist today.”

Maria Calico, president of the International Association of Fairs & Expositions, travels to two dozen fairs a year and said she has seen an insult clown once or twice in the last decade.

Calico just happened to be in Hamburg, though, and got a glimpse of Simmons working the crowd. “And I’ve not seen one elsewhere in years,” she said.

By Simmons’ estimate, there are now 10, at most, working tanks across the country today. No one else seems to be keeping hard, historical numbers on this small slice of weird America.

The last few soldier on. Ortiz broke a foot in the dunk tank, a hand too, but may put on the makeup once more for Santa’s Enchanted Forest, a holiday-themed fair that runs for several months each year in Miami. The Cuban Americans who attend the event love him, he said, so he likes to stick to Florida.

“It’s a dying art, making people laugh at themselves,” he said.

At the Erie County Fair, as a tie-dyed sunset swirled out over the midway, past the wine slushie stands and deep fried whatever-you-wants, Simmons’ grating voice cackled out from his cage.

The next stop for the dunk tank would be the Champlain Valley Fair in Essex Junction, Vt. Simmons thought that would be a good place to wear the red Make America Great Again hat he keeps in his cage. From there, he’d keep on going, on and on across America, at least until winter comes.

“I basically get paid to call people stupid,” Simmons said. “They lied in school when they said you can’t make a living being a smartass.”