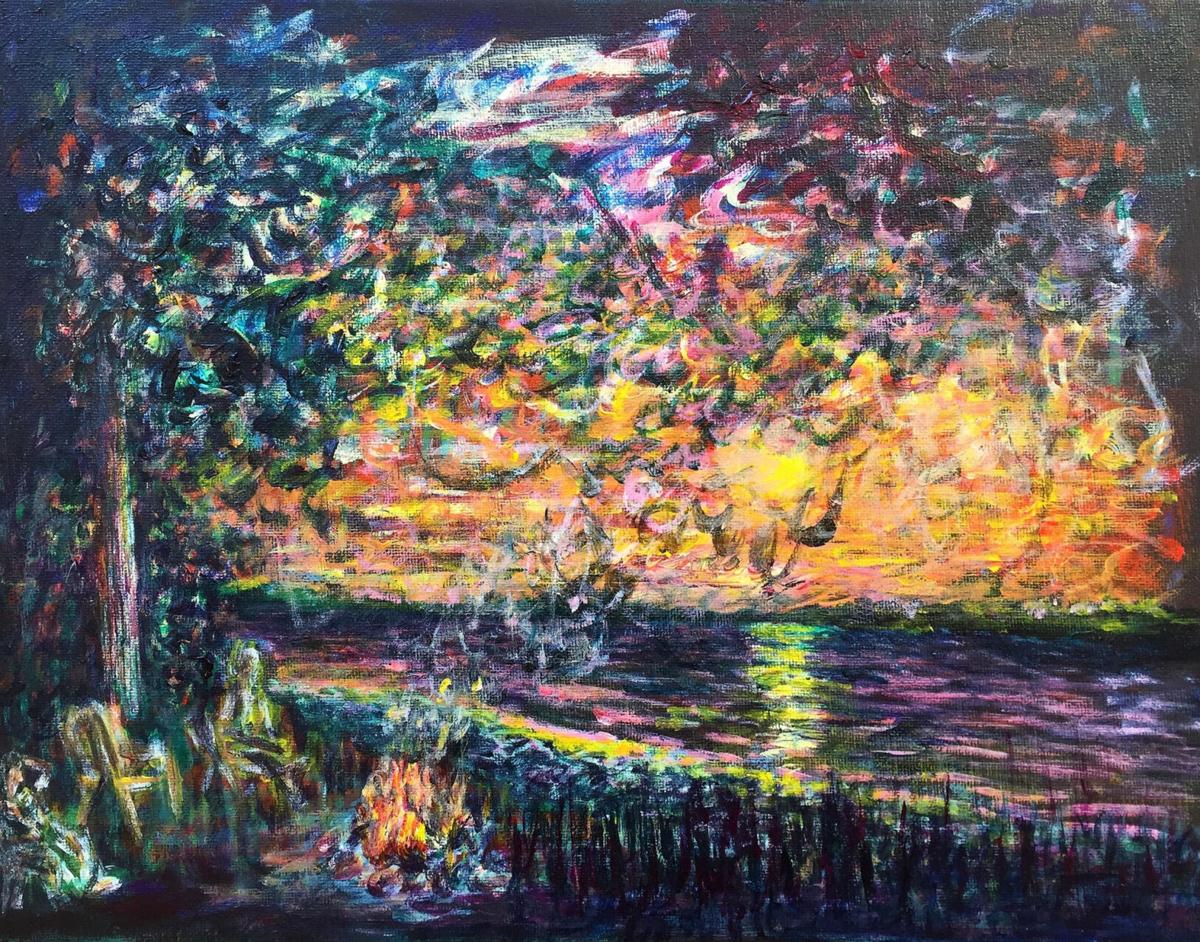 “Stories Around the Campfire,” acrylic on canvas by Thomas Continio, is on display at River Muse Art Gallery & Studio, 229 John St., Clayton. 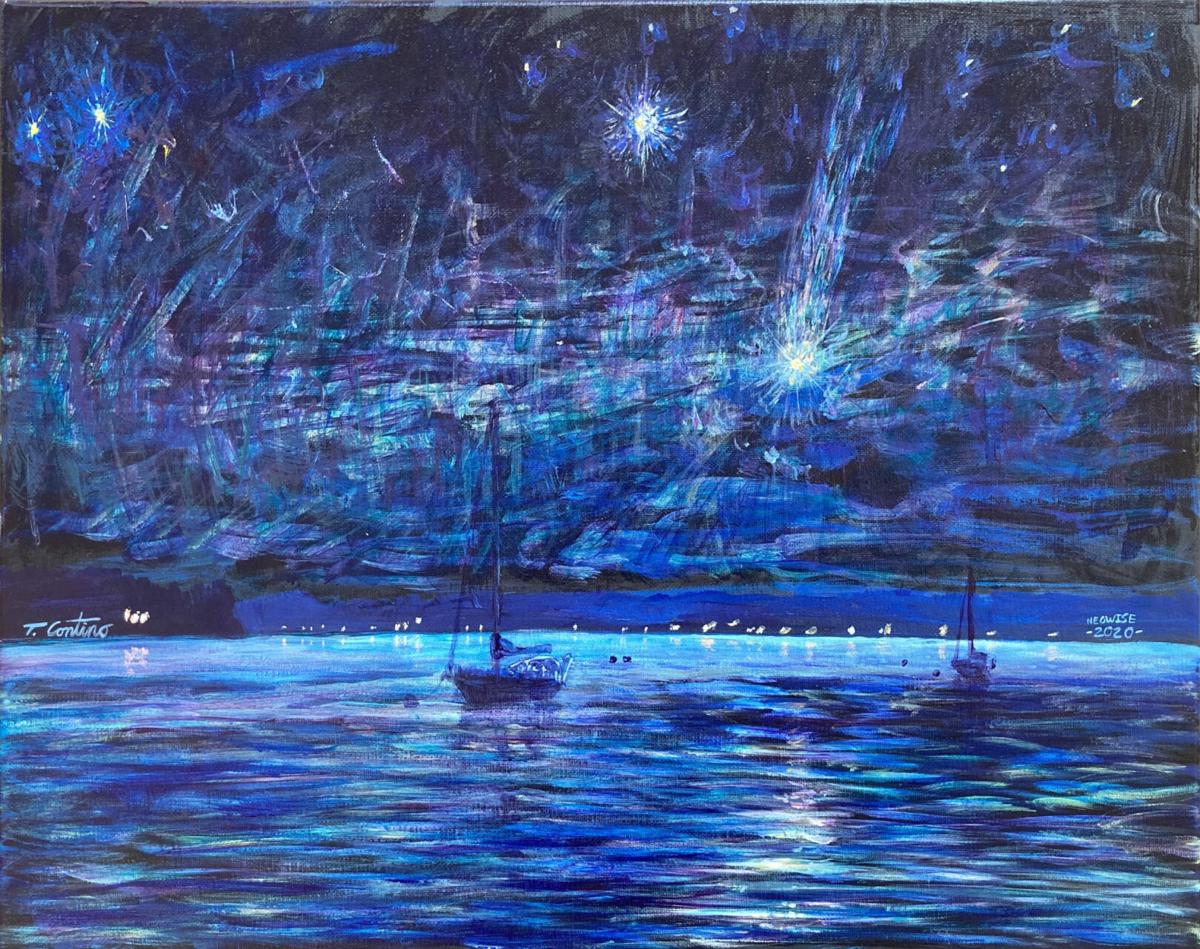 “Neowise Over Henderson Harbor,” acrylic on canvas by Thomas Contino 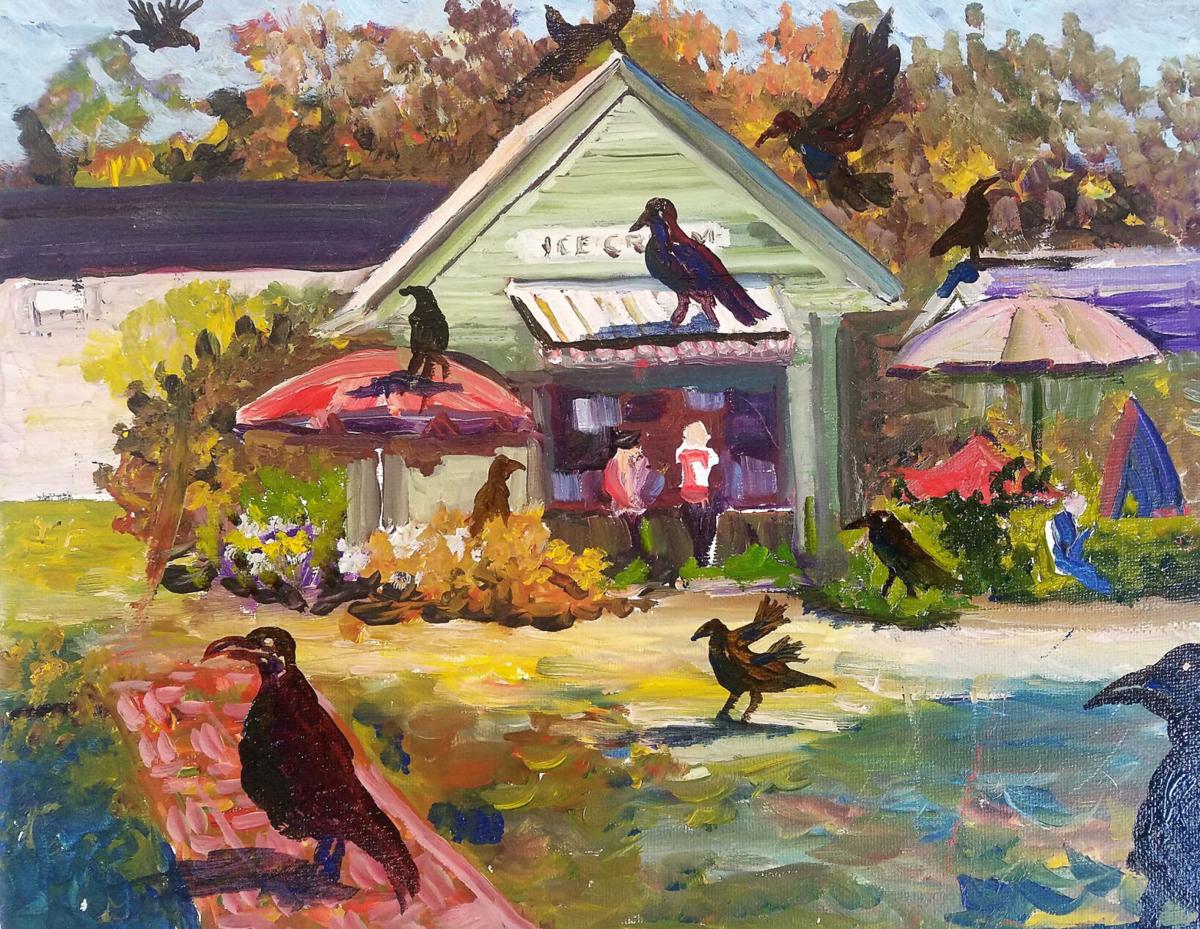 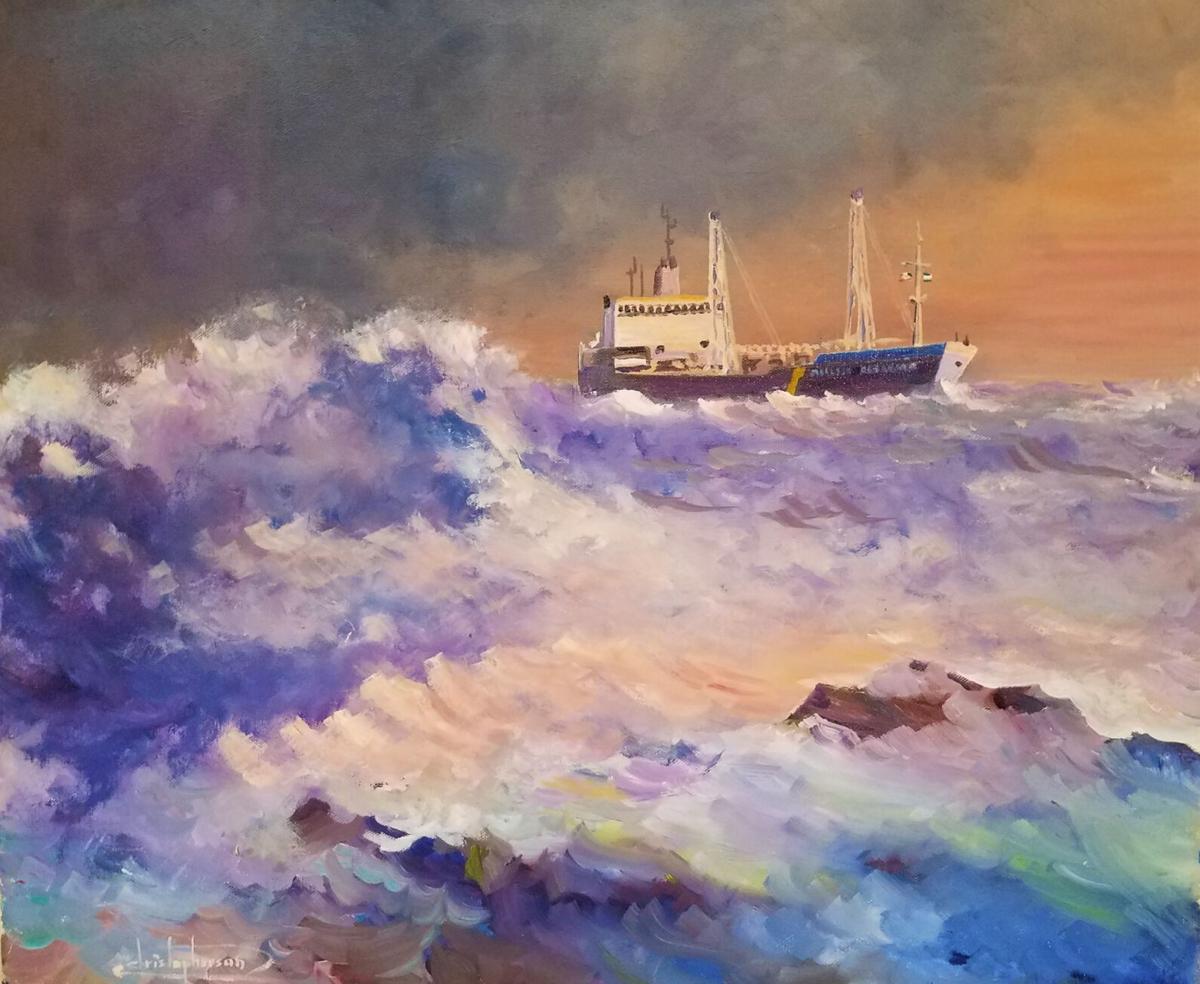 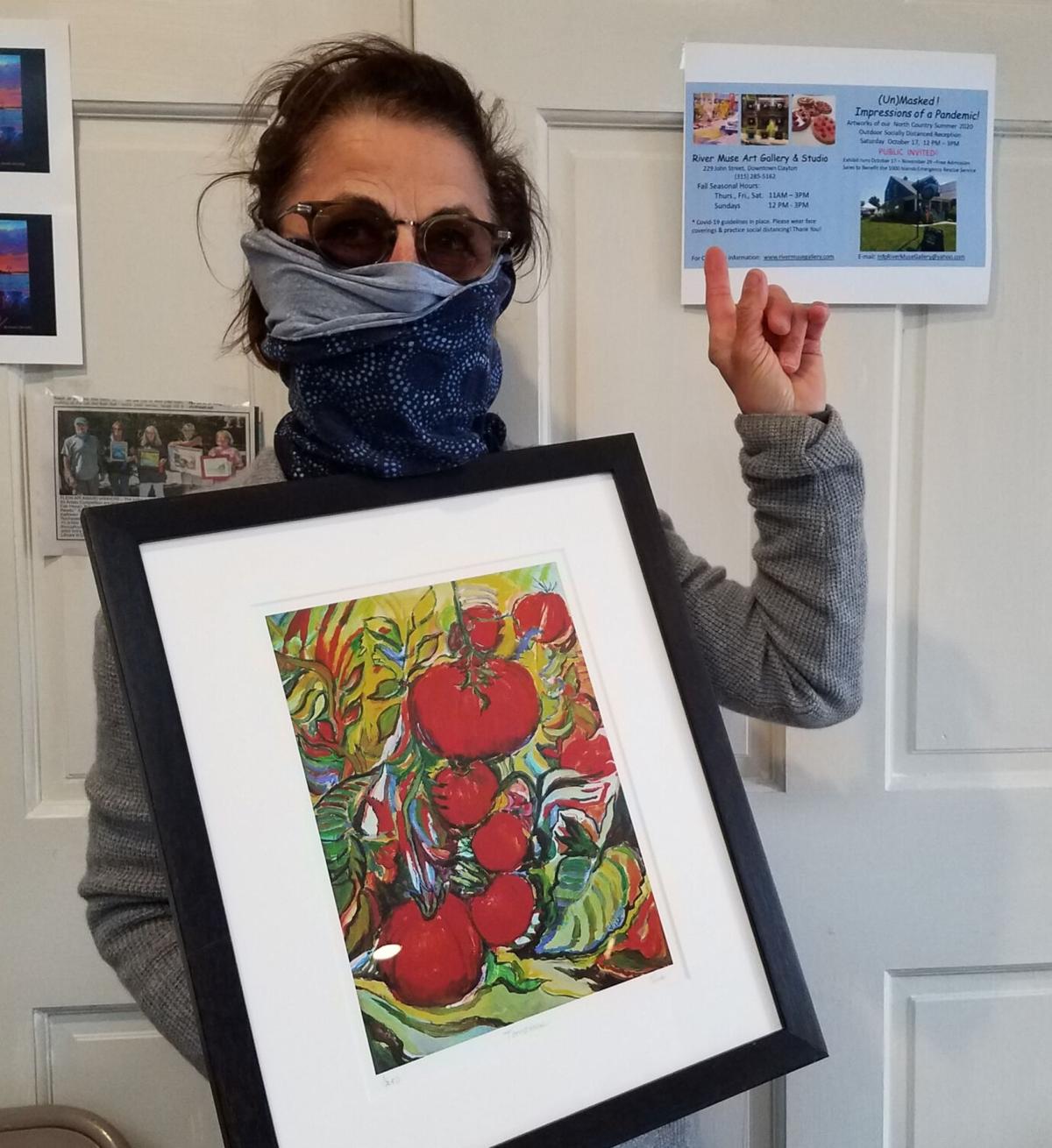 Artist Christine Tisa displays her “(Un)Masked!” entry ‘‘Tomatoes,” inspired by what she grew in her pandemic garden. Courtesy of William Christopherson 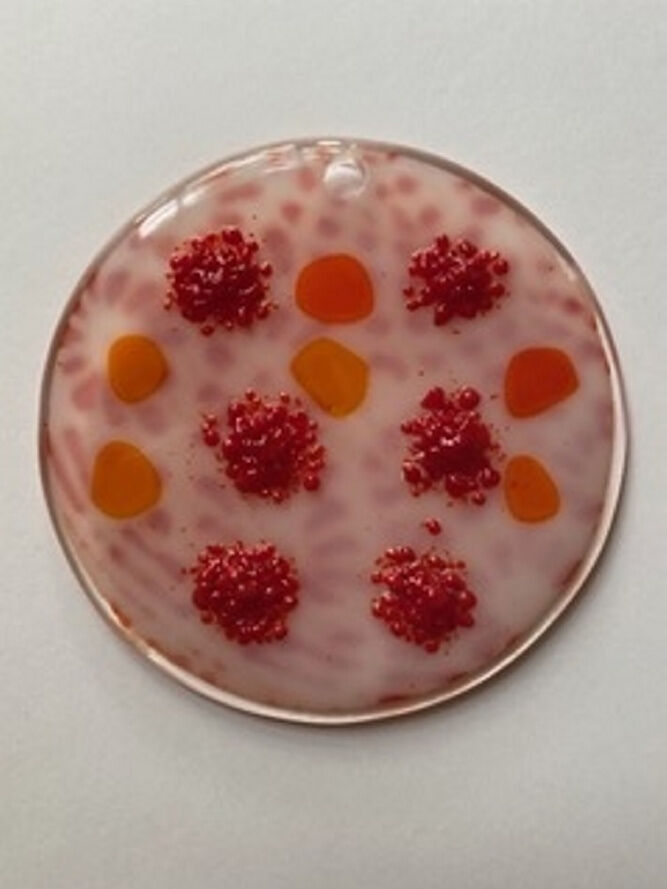 “Stories Around the Campfire,” acrylic on canvas by Thomas Continio, is on display at River Muse Art Gallery & Studio, 229 John St., Clayton.

“Neowise Over Henderson Harbor,” acrylic on canvas by Thomas Contino

Artist Christine Tisa displays her “(Un)Masked!” entry ‘‘Tomatoes,” inspired by what she grew in her pandemic garden. Courtesy of William Christopherson

CLAYTON — Thomas Contino’s acrylic on canvas painting, “Stories Around the Campfire” shows brilliant, multi-colored smoke hovering over the campers, or they could be just people in a backyard somewhere in COVID-19 America, eager to get out and about.

“The smoke is kind of going around and turning into a story, creating an atmosphere,” Mr. Contino, Henderson, said. “Especially during the pandemic, it’s getting out into nature and how people have to do whatever to socialize. We need ways to relate to each other. Camp fires are a good way to do that because you’re outside, you can be socially distanced, and you can still talk to each other.”

Mr. Contino is one of the artists who will be featured at the exhibit, “(Un)Masked! Impressions of a Pandemic” at River Muse Art Gallery & Studio, 229 John St., Clayton. The exhibit opens with a reception open to the public from noon to 3 p.m. Saturday.

“We’re concentrating on work that artists have completed during the quarantine period with the virus,” said William Christopherson, Watertown, who will also have paintings at the show. “Some of the art will be symbolic or representative of the pandemic itself. Other artwork is artwork that artists did while they were quarantined alone in their studios and things.”

Included in Mr. Christopherson’s entries for “(Un)Masked!” are the oil paintings “Navigating 2020 — Melissa Desgagnes at Tibbetts Point”and “After the Quarantine.”

His “Navigating 2020” painting features the Canadian cargo ship Melissa Desagnes in stormy seas off Cape Vincent as it heads into the St. Lawrence River. “After the Quarantine” features crows dotted around an ice cream shop in Sackets Harbor.

“I kind of had fun with it,” Mr. Christopherson said of his ice cream shop painting. “It’s kind of a play on the crows that Will Salisbury has. A lot of artists are doing crows nowadays. It’s a popular subject.”

Mr. Contino, a 2011 graduate of Belleville Henderson Central School, started to explore his painting skills while in high school.

“As I got into college, painting was a sort of a stress relief type of thing,” he said. “As it got more serious, it was a stress of its own.”

Mr. Contino attended Onondaga Community College for a semster and is finishing his bachelor’s degree at SUNY Canton.

In addition to “Stories Around the Campfire,” Mr. Contino has two other paintings in the “(Un)Masked!” exhibit.

“They’re a little bit different, a kind of variety to show some of the different things I do,” he said. “But there is kind of a dominant theme to them all.”

His two other works for the exhibit are, like “Stories Around the Campfire,” acrylics on canvas: “Night Stroll by the Gill House Inn” and “Neowise over Henderson Harbor.”

“Neowise” is the comet discovered on March 27 by astronomers during the NEOWISE mission of the Wide-field Infrared Survey Explorer space telescope.

“It kind of came out of nowhere,” Mr. Contino said of the comet. “Nobody knew it was coming until just before they found it, a couple months ahead of time. And it was a pretty spectacular display.”

The display caught his attention on one of his evening strolls in Henderson Harbor.

“I exaggerated a little bit, adding my style to the picture,” he said. The sky in his “Neowise” painting has lots of texture.

“It’s different colors than what you would normally see,” he said. “It’s almost aggressive and expressive brush strokes, a lot of layers. As you look at the painting from different angles, you kind of see different colors.”

Mr. Contino’s “Gill House” restaurant painting was also inspired by one of his nocturnal jaunts.

“It’s closed now,” he said. “It’s one of those restaurants that in my lifetime has changed hands quite a few times. I don’t think it’s been succesful in the last couple of renditions of people trying to run it.”

The emptiness of the building made him think of the pandemic.

“There’s almost like a ghostly or eerie feeling to it,” Mr. Contino said. “It’s an old building that used to be a vibrant part of the community and now it’s just sitting there vacant and falling in.”

The “(Un)Masked!” exhibit will also have three-dimensional artwork, such as the glassworks of Susan Berry, a summer resident of the Thousand Islands area. In the winter months, she teaches glass fusing and beadmaking at the Center for the Arts in Bonita Springs, Fla.

Her “(Un)Masked!” entries include two glass ornaments with images of the COVID-19 virus reproduced. Also, for her “Zoom Meeting,” a reflection of a computer screen during a Zoom session, four types of glass and colors were used, which were fired in a kiln.

“I chose transparent colors for the squares, which always looks amazing as a window hanger and I used dichroic glass for the ‘heads of my people,’ for its jewel-like shimmer,” Ms. Berry said.

When Ms. Berry sits down with an idea, she’s never sure her original perception will be viewed in the same way.

“For the ‘(Un)Mmasked’” exhibit, I thought of what I saw most often during this pandemic,” she said. “Through Zoom, I saw students singing, friends gathering, committees meeting and at one point, unbeknownst to an attendee, his corporate colleagues were seeing him in the buff! That inspired me to do ‘Zoom Meeting.’”

Due to pandemic-related protocols, exhibit organizers will arrange many of the art displays outside on the grounds of River Muse.

“We have to be very careful with the virus going around,” Mr. Christopherson said.

A maximum of eight people at a time will be allowed in the gallery. There will be hand-sanitizing stations and complimentary snacks such as cider doughnuts will be individually wrapped.

A portion of the proceeds from art sold at Saturday’s opening will benefit the 1000 Islands Emergency Rescue Service.