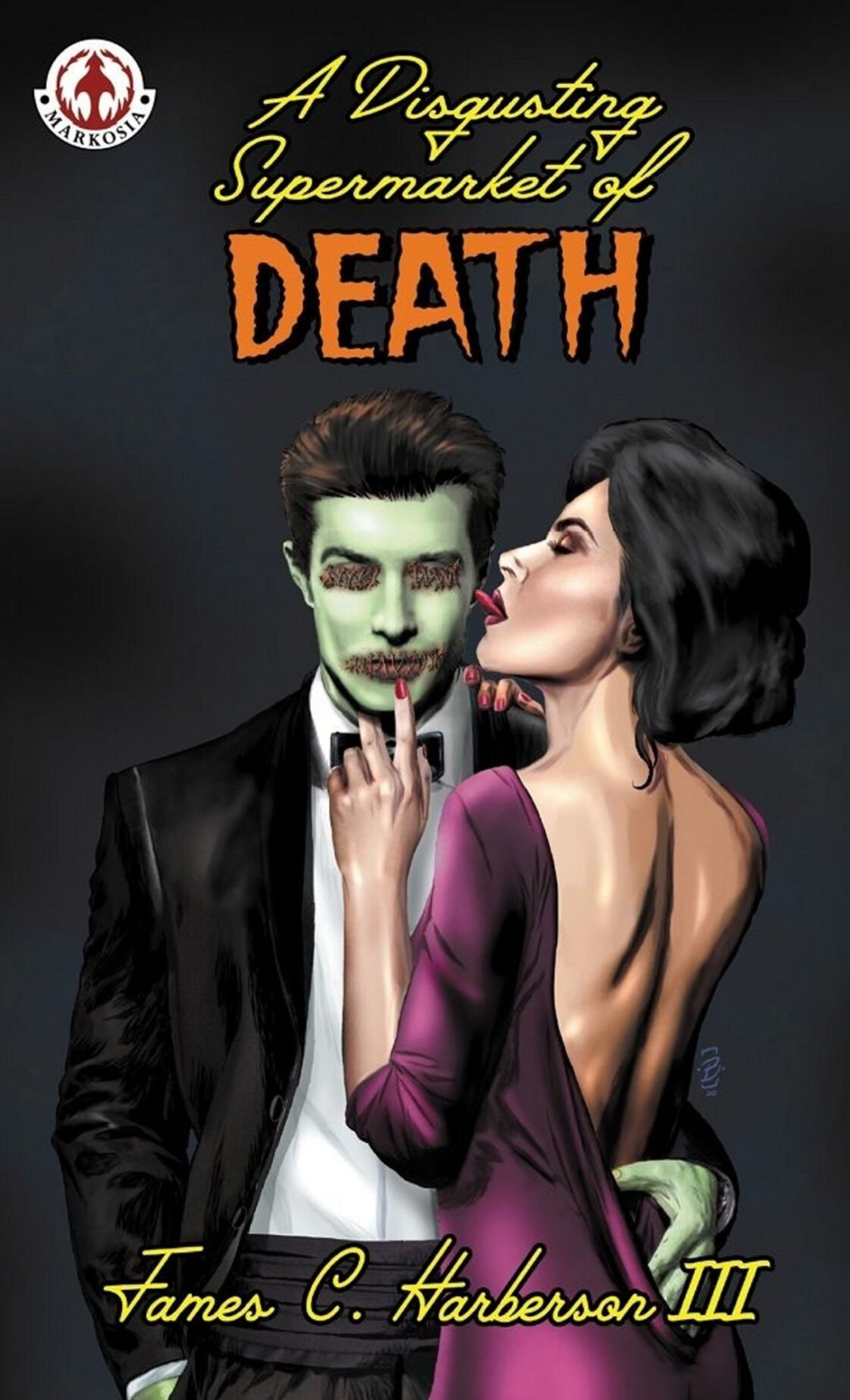 “A Disgusting Supermarket of Death” is published by Markosia. “People are absolutely fascinated with people who do monstrous things,” author James C. Harberson III said. “I think part of it is, ‘I want to understand why this person did this.’” Cover art and design by Stephen Baskerville 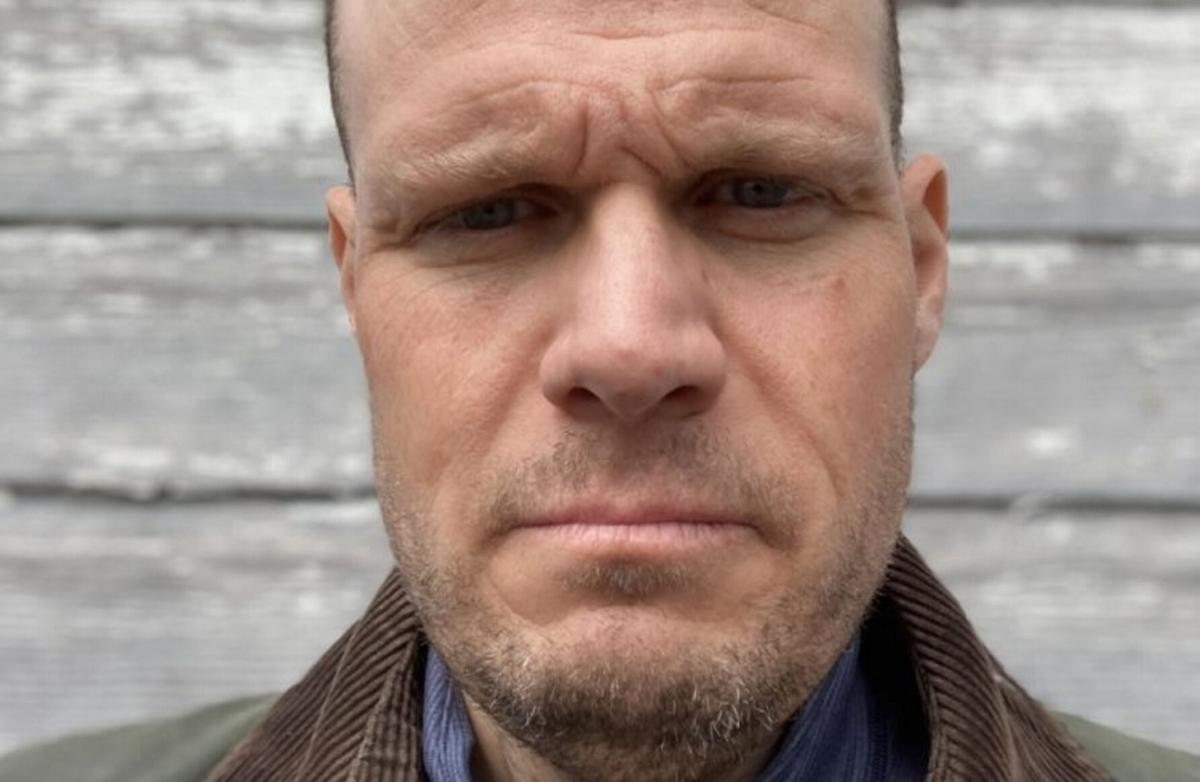 “A Disgusting Supermarket of Death” is published by Markosia. “People are absolutely fascinated with people who do monstrous things,” author James C. Harberson III said. “I think part of it is, ‘I want to understand why this person did this.’” Cover art and design by Stephen Baskerville

WATERTOWN — You will meet several unsavory characters in a new collection of short stories authored by city resident James C. Harberson III. So when he mentions that he has a friend who teaches at a Baptist university who worries about him, you will kind of understand where that friend is coming from after reading just a few of the tales in the book.

“He asked me once, ‘Where do you come up with these ideas?’ He was worried for my soul that I have all these dark thoughts,” Mr. Harberson said.

For his latest dark thoughts, it begins with the title of Mr. Harberson’s book, published by Markosia: “A Disgusting Supermarket of Death.”

“The stories are intentionally short and high octane,” he said. “I think of them as espresso or whiskey shots. Short and pointed.”

Some of the more milder plots of the 22 short stories in the collection:

n A person with obsessive compulsive disorder has an irrational fear of being falsely suspected of murder, which sends him on a neighborhood killing spree.

n A reporter attends an invitation-only screening of a horror film that drives viewers to murder and/or suicide.

n An extreme haunted house patron can’t tell if the murders occurring around him are real or just part of the entertainment.

If you think the above plot lines are scary, look around, advises Mr. Harberson, and please, don’t worry about his mental state. He said he has the same mind-frame of Carthage native and horror movie master John Carpenter.

“He said, ‘The real world is much scarier than anything you could put in a horror book,’” Mr. Harberson said. “I look at the real world, like mass shootings and all these other terrible things that people do to one another, and I see horror as a kind of coping mechanism. It allows you to manage the horror, appreciate it and discipline it in your own sense.”

Also, make no mistake, the stories in “A Disgusting Supermarket of Death” are brainy — a description not related to the various body parts that get splattered in the tales. Mr. Harberson has a master’s degree in religion and was a lawyer before embarking on his writing career. Those influences, along with his appreciation of the classics of literature and his love of horror movies are clear in “A Disgusting Supermarket of Death.”

There are sub-genres of horror, ranging from ghosts and Gothic to paranormal and vampire fantasy tales. Mr. Harberson’s stories tend toward the hyper-violent, if only to amplify the comedic aspects he introduces into some of his stories.

Mr. Harberson said that two of his favorite comedy/horror films are “Return of the Living Dead and “Re-Animator,” both released in 1985.

“They don’t take themselves too seriously,” he said. “It’s still serious to a certain extent, but what’s happening on screen is so horrifying that if you don’t have some ironic or comedic distance from it, it’s too much.”

The are several comedic one-liners in “A Disgusting Supermarket of Death.” In the story, “The Ice Cream Man,” the protagonist finds himself going on a killing spree and gets macabre satisfaction when he guides one body to plastic on his floor: “I wrapped him, unexpectedly thankful that Mom insisted I learn the art of gift wrapping.”

Several stories in “A Disgusting Supermarket of Death” share social commentary. For example, in “Team Player,” a freshman invited to join America’s winningest high school football team discovers he must enter a blood pact with Satan to succeed.

“That story is more about the insane football and sports culture that tends to eclipse, from what I see at least, what is the main purpose of education in this country, which is to teach people stuff,” Mr. Harberson said. “A lot of schools in this country have become a pretext for their sports programs, especially programs that rival professional teams. It’s a commentary on that — the idea that education in this country gets turned into some kind of sort of a secondary consideration to, ‘How much money can we make playing football?’ or whatever. I like football, but this idea that it becomes a life-defining event, especially for kids, it’s troubling for me. It’s sort of a derangement of what one might call a well-lived life.”

In “Extra Credit,” true crime fans get too much of a good thing.

“There are lots of people, and I’m one of them, who are really into that,” Mr. Harberson said. “But I’m not as enthusiastic as probably your average true crime person. There are people who are into true crime who make pilgrimages to famous murder sites.”

“People are absolutely fascinated with people who do monstrous things,” Mr. Harberson said. “I think part of it is, ‘I want to understand why this person did this.’”

But maybe there’s another side to the fascination, he added.

“You have to think that there are many people who probably have fantasies about doing some of the things these killers have done, so they can safely and imaginatively live out there fantasies without harming anyone.”

Markosia, the publisher of “A Disgusting Supermarket of Death” is the same U.K.-based company that published the violent graphic novel “Stay Alive,” last year. Its plot was co-created by Mr. Harberson and Frazer Rice. Mr. Harberson wrote its script. The graphic novel, for mature readers, tells the story of how a Hollywood starlet revives her fading career by provoking a group of serial killers, and then starring in “Stay Alive,” a reality TV show about surviving the killers’ attempts to murder her.

“Stay Alive” has been nominated for a Rondo Hatton Classic Horror Award.

“I think it’s safe to call horror one of the recession-proof aspects of the entertainment culture,” Mr. Harberson said. “It’s always in season. There’s lots of horror people out there.”