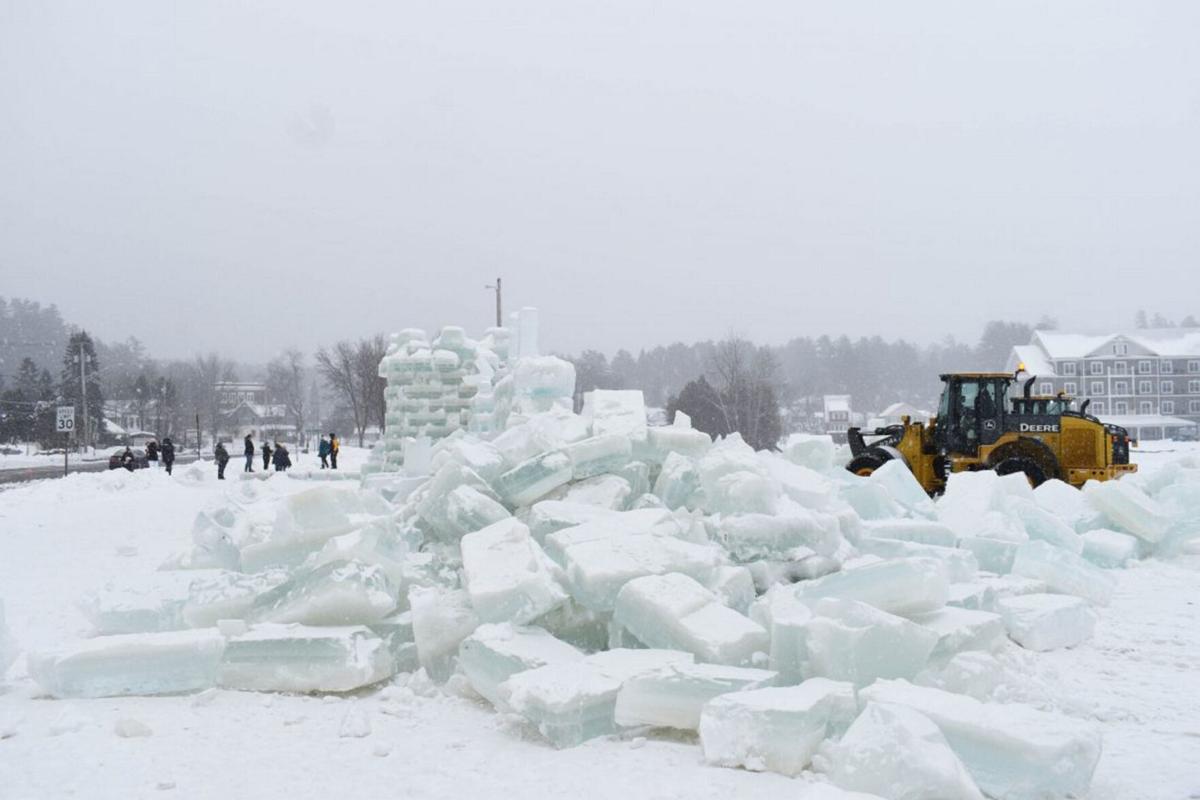 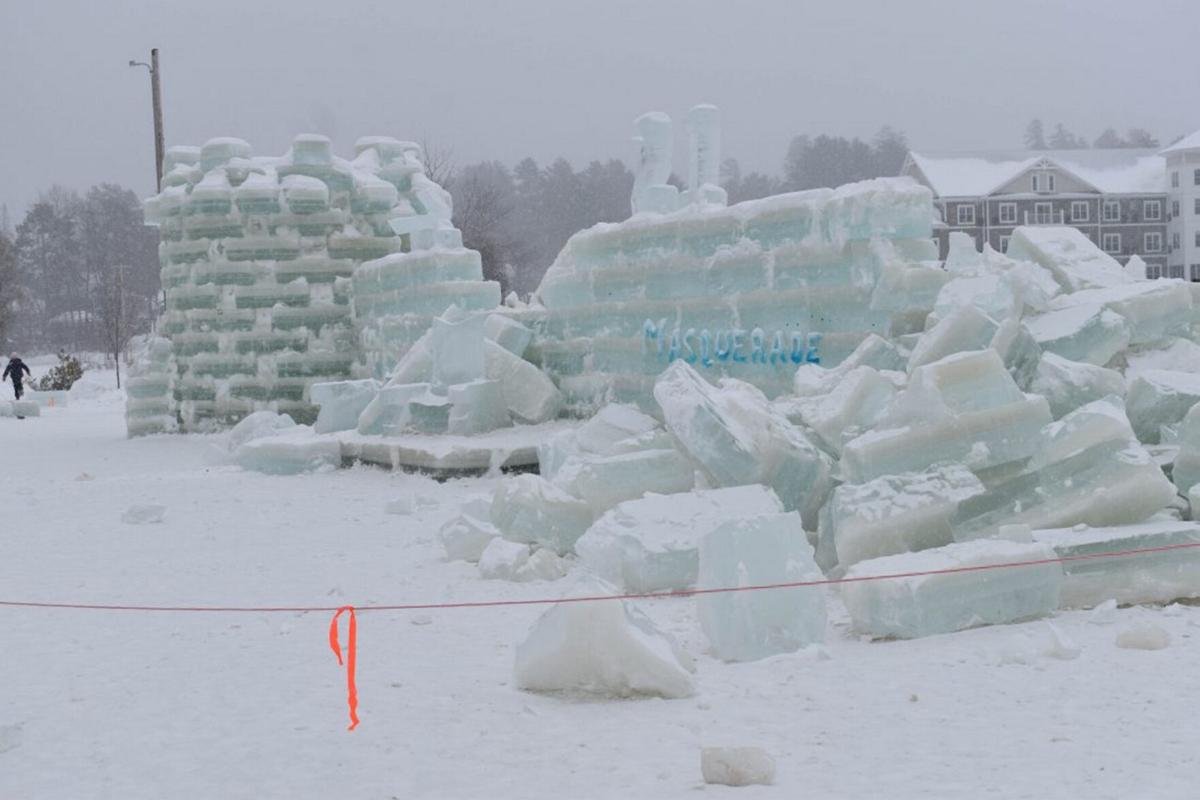 SARANAC LAKE — The strange 2021 Winter Carnival is over now, and Saranac Lake village workers demolished the Ice Palace on Tuesday.

Though the COVID-19 pandemic hampered many carnival traditions and events this year, Saranac Lakers found a way to celebrate virtually, in real life and in alternative ways.

Some innovations, like livestreaming events, may stick around in non-pandemic years. Others, like park-and-view fireworks and virtual-only events, organizers are glad to leave in the past.

Winter Carnival Committee Director Jeff Branch said the village tore down the palace early because it attracts too many people and because many of them were breaking COVID-19 pandemic guidelines and parking rules.

“We can’t control the crowds down there. We can’t be there 24/7,” Branch said. “In my mind, it was always going to be a short-lived thing this year.”

The Lake Flower boat launch parking lot has been blocked off with gates for the duration of carnival — the Carnival Committee got a permit from the state Department of Environmental Conservation to close it — but throughout the week, spectators were moving the gates and parking in the lot to walk over to the palace.

“We’d put them up. I’d get a call 10 minutes later and be back down there,” Branch said. “One day I went down and people had moved them and they were literally driving behind the Ice Palace.”

As workers tore down the palace on Monday afternoon, a portion of River Street was overrun with visitors trying to get one last glimpse at it. At one point in the afternoon, several cars were parked along the roadside near the Palace, some with emergency lights flickering.

Both sides of River Street are no-parking or idling zones, according to village police Sgt. Leigh Wenske. One parking lot usually used for customers of the Lakeview Deli was jammed with visitors to the Palace. Visitors darted from one side of the busy street to the next.

Even as heavy equipment operators put metal to ice to break down the palace walls, visitors continued to pose in front of the rubble and take videos of the structure as it was demolished. Shortly after 1 p.m., kids could be seen navigating the icy wreckage as parents looked on, snapping photos. One man, holding his child close, took a selfie with a pile of destroyed ice bricks behind him.

Dean Baker, director of the Ice Palace Workers 101 volunteers who build the Palace, said it was standing strong after a few weeks of cold weather.

“It’s very structurally sound,” Baker said. “They’re tearing it down because there are too many people down hanging around down there.”

He said construction this year was well-done and safe. Builders were limited to 50 people or fewer each day, there was a daily sign-up for contact tracing if needed, and workers wore masks and socially distanced. He said all these precautions made no difference in construction.

Baker said the ice blocks left on the shore of Lake Flower will likely last into the spring, when they will melt into the lake, weather depending.

“That’s the nice thing about the palace: We recycle it every year,” Baker said.

This demolition may be a disappointment to anyone hoping to purchase the Ice Palace, which was listed on the Zillow real estate website this year for a cool $5,500,000.

It was listed as a seasonal residence by local Realtor Jonathan Gorgas of Merrill L. Thomas Inc.

“I saw that they kind of wanted it to be virtual this year, so I thought it would be a nice way to get some pictures out there,” Gorgas said. “The mood in town was a bit glum this year for carnival, so I thought I would just try to make people laugh and smile.”

Baker said people have listed the Ice Palace as “for sale” before.

“That was pretty funny. Quite the price, too,” Baker said.

Around town, others found their own ways to celebrate Carnival: building Arctic Golf courses in their front yards, creating a mini-Ice Palace on Moody Pond, decorating their homes or wearing costumes. Branch said he was happy to see this.

“What it comes down to is, people in this community put things together that were spot-on,” Branch said. “It’s the people from outside the area that came and screwed it up for everybody. ... I know we’re here to bring business into town, but this year was a different year.”

The committee’s decisions came with a fair amount of controversy from many perspectives, but Branch said he felt they made good choices and held as much of a Winter Carnival as they could.

“There are a lot of haters out there that were cursing me up and down for saying ‘Stay home,’ but the bottom line is that we couldn’t handle what we had,” Branch said. “You see all that hate spewed out on social media, but the emails and comments I get that aren’t on social media are people who take time to call me or write a letter to the Carnival Committee ... they’re all very happy with how things went. Those are the people that you care about. You don’t care about the keyboard warriors who really have nothing better to do and don’t take the time to educate themselves about what’s really happening. You’ve got to kind of let that all run off your back.”

He said the committee did what they thought was right, based on the facts and what they believed was best for the community.

Do you support the decision to take down the Winter Carnival Ice Palace over concerns about crowds gathering during the pandemic?

What a weird story, brought about by a weird reaction from weird, controlling liberals. Let the people play! Let them enjoy the ice palace. So what if they're not following your stupid Rules! I think I fell asleep and woke up in The Hunger Games.