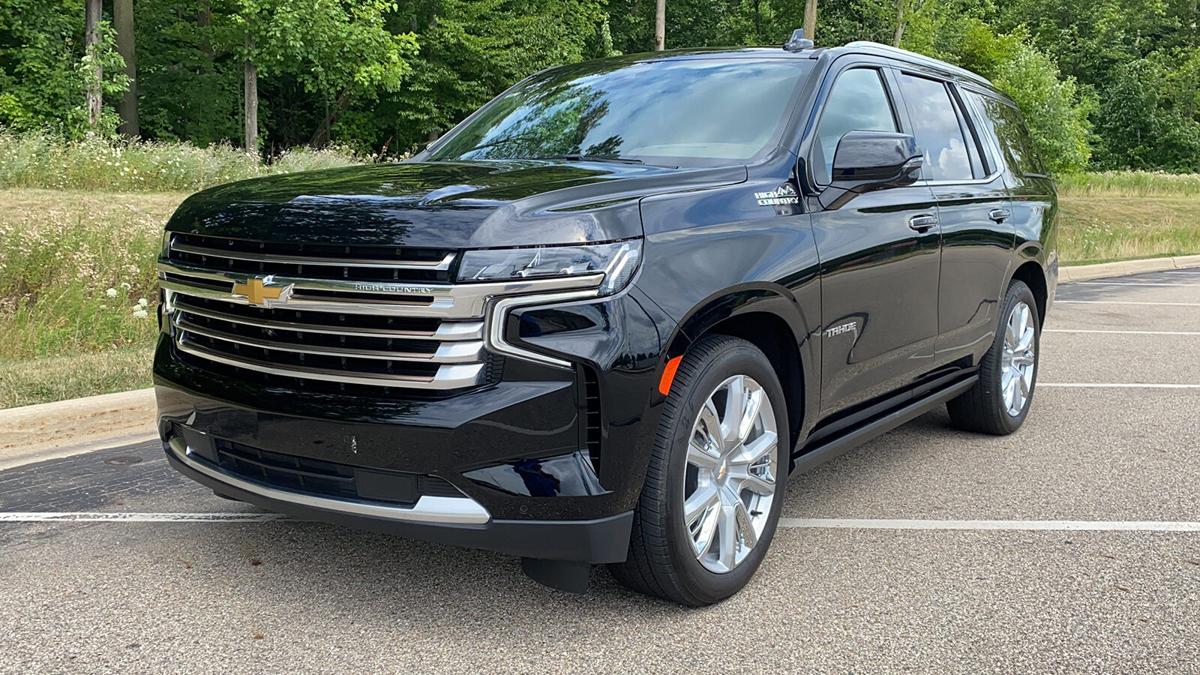 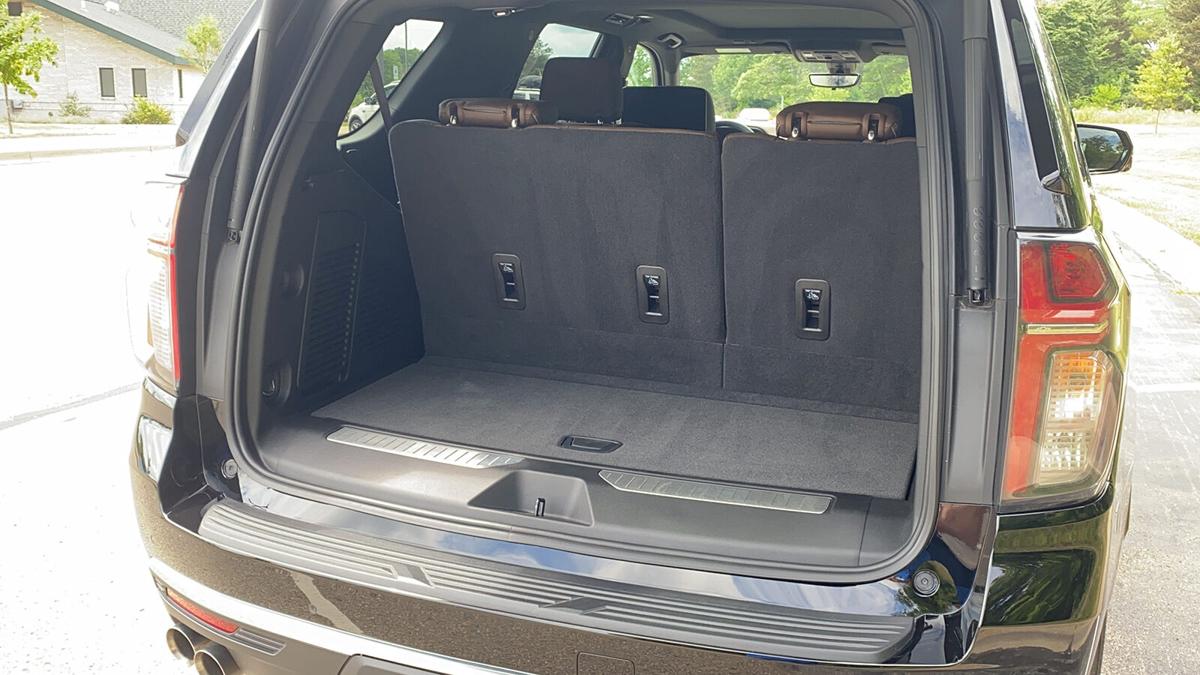 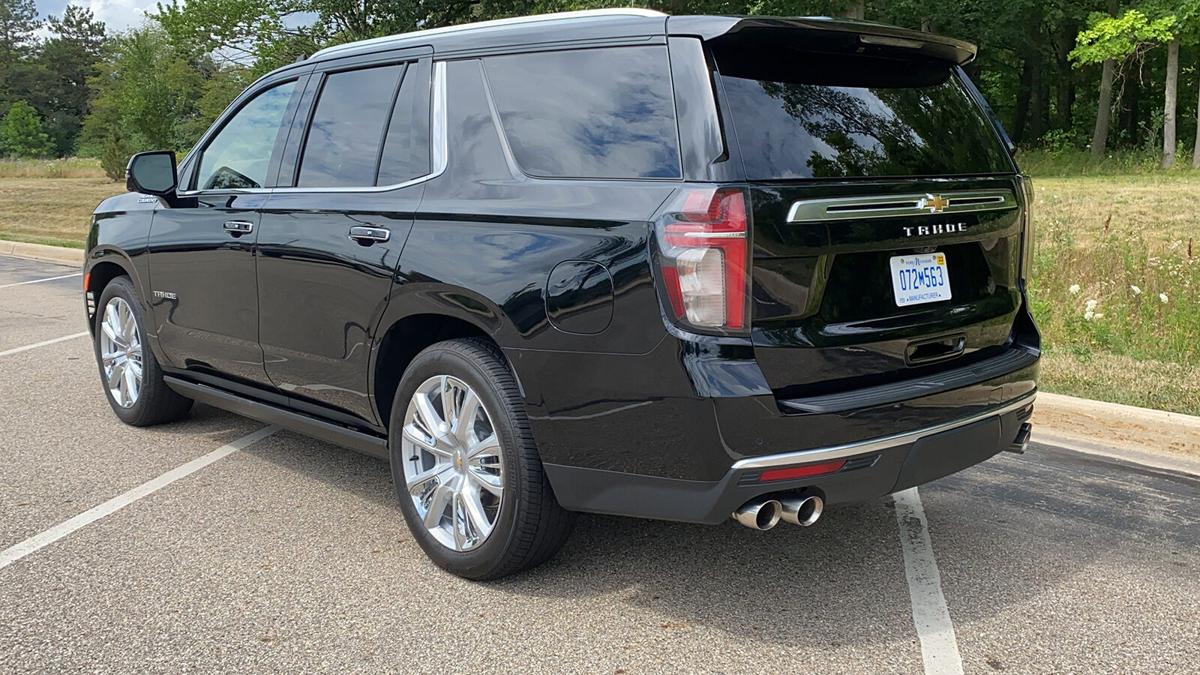 The 2021 Chevrolet Tahoe is 6.7 inches longer than the 2020 model. Mark Phelan/Detroit Free Press/TNS 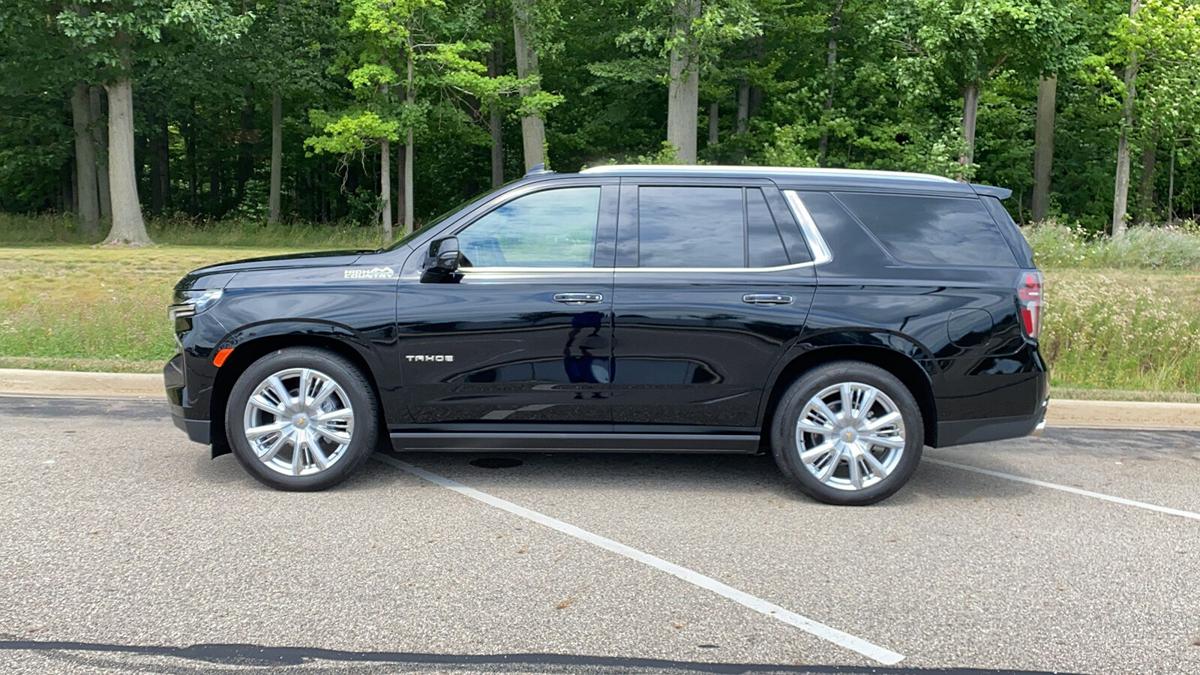 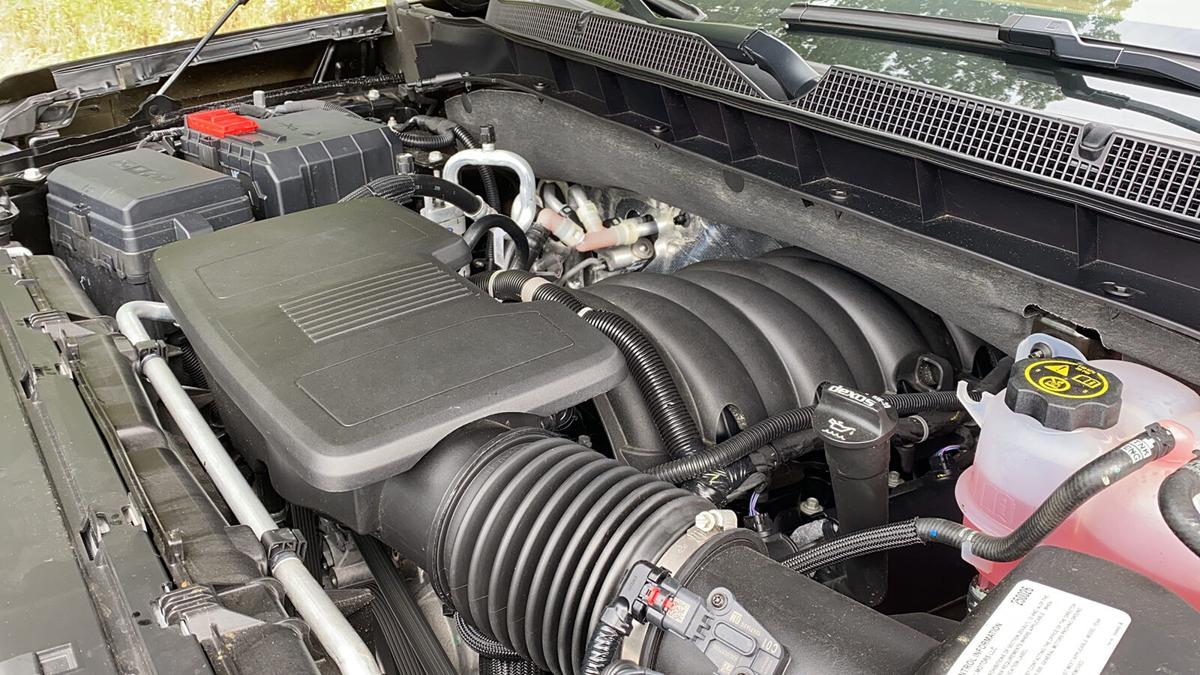 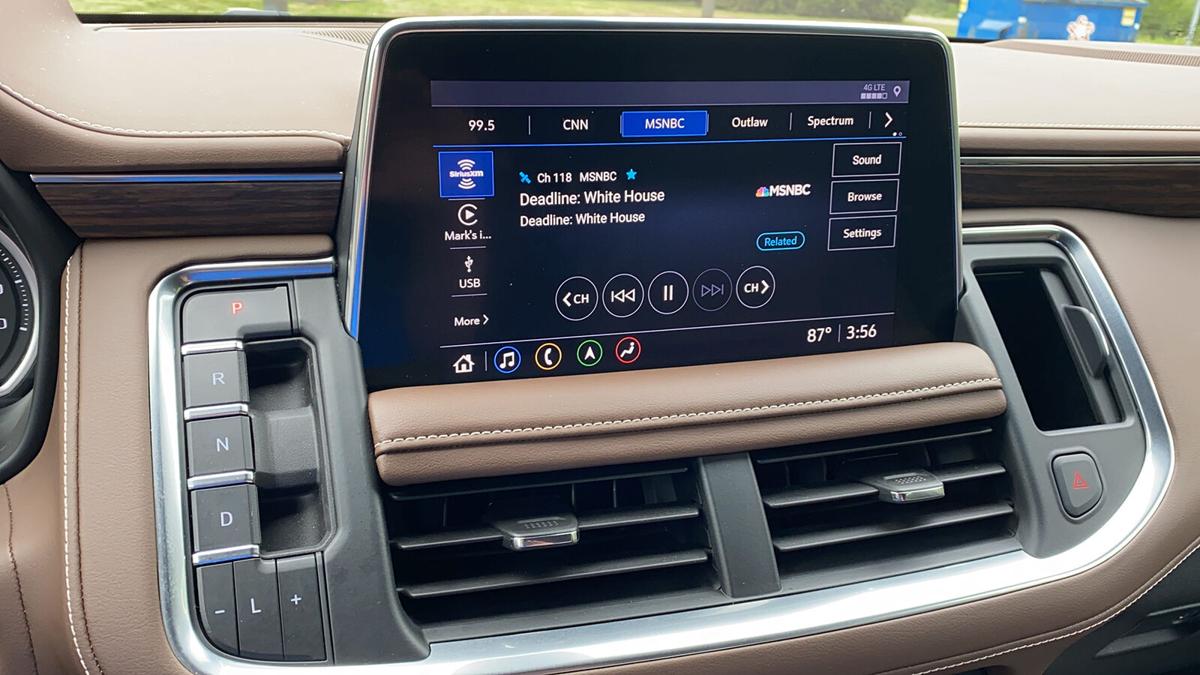 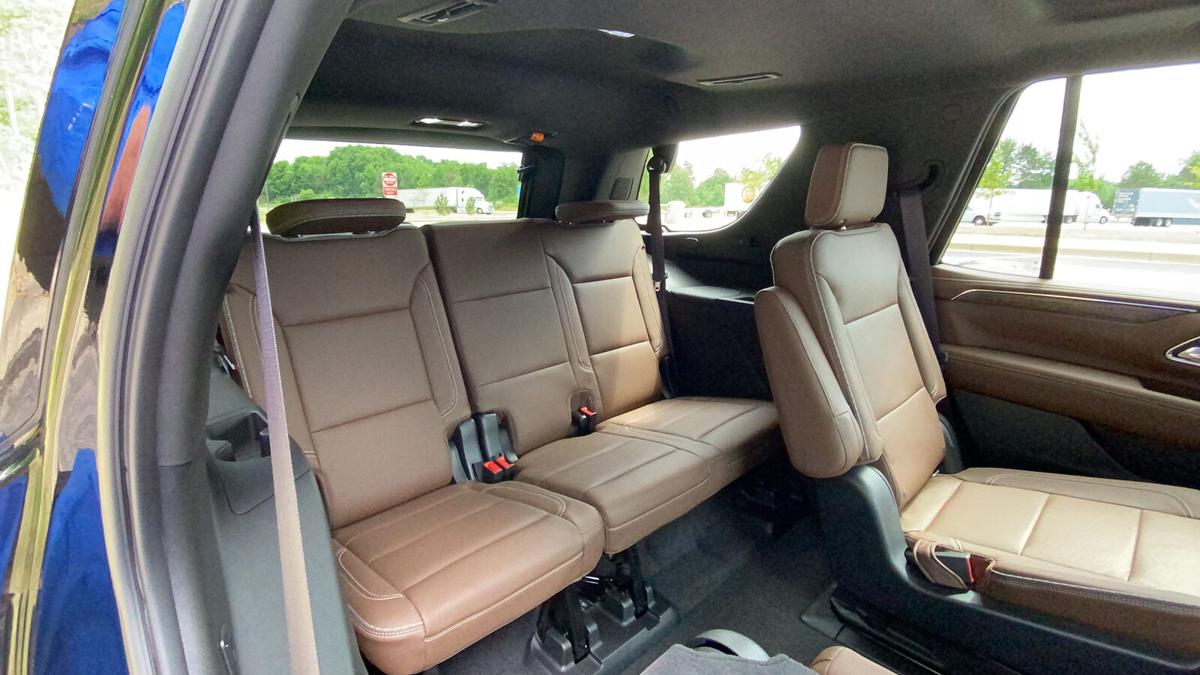 The 2021 Chevrolet Tahoe is 6.7 inches longer than the 2020 model. Mark Phelan/Detroit Free Press/TNS

DETROIT — Big vehicles don’t make me nervous. I grew up with them. My father, an engineer, drove a succession of pickups through fields and forests developing agricultural and construction equipment. My mother, 5 feet, 4 inches in heels, was decades ahead of auto industry trends, driving a Suburban — always calling it her car, never “the truck” — because of its commanding view of the road.

The Michigan State University School of Journalism asked me to chauffeur visiting editors around campus because I wasn’t afraid to drive a 15-passenger Econoline van in a parking structure.

So believe me when I say the 2021 Chevrolet Tahoe is big.

Big enough to maintain social distance from the front seats to its newly comfortable third row of seats — more than 6 feet away, by a tape measure stretched nose to nose.

The 2021 Tahoe is 6.7 inches longer than the outgoing model, but size is the tip of the iceberg. Most of the new SUV’s improvements are below the surface, including an independent rear suspension that improves ride, and, more important, transforms the third row of seats from an automotive penalty box into a premium perch my passengers wouldn’t vacate even after we measured.

The Tahoe — and its even bigger brother, the Suburban — rules the mass-market big SUV market, accounting for nearly 50 percent of the lucrative segment’s sales. Add the upcoming GMC Yukon, and General Motors dominates the segment at around 70 percent.

It’s also terrific, establishing itself as the big SUV to beat.

The 2021 Tahoe is arriving in dealerships now.

My top-of-the-line model had an adaptive air suspension and 22-inch alloy wheels. It devoured speed bumps like breakfast burritos and was quiet at highway speed.

It was easy to conduct conversations, even with third-row passengers pretending to be in a limo. The comfortable second row captain’s seats make nice foot rests when folded flat, incidentally. They also slide fore and aft and tip for rear seat access. Power running boards and adjustable ride height contribute to easy ingress and egress.

A smooth, quick 10-speed automatic transmission is standard. The Tahoe uses new shift controls built into the dash at driver’s 2 o’clock. Pull-toggles control the commands that set you in motion — reverse and drive — while you press buttons for park and neutral. It’s a layout that will probably be second nature in a few days. A rocker switch beneath those controls lets you shift up and down for trailering, hills, etc.

At 14 mpg in the city, 19 on the highway and 16 combined, EPA fuel economy estimates for my 6.2L 4WD High Country trail its direct competitor, a Ford Expedition with a less powerful 375-hp twin-turbo V6. GM recommends premium gasoline for spec-sheet power and fuel economy, while Ford’s EcoBoost V6 generates its figures with less expensive regular.

Maximum Tahoe towing capacity is 8,400 pounds. My 4WD 6.2L was rated at 8,100. Those ratings use SAE standards, but I didn’t have a chance to tow during my test.

Chevy builds a wide range of models: Six trim levels, three engines and rear- or four-wheel drive. I tested a top of the line High Country. That model starts at $69,600 for RWD, $72,600 4WD.

Tahoe prices compare favorably to the Ford Expedition, its only serious competition.

Features on my vehicle included:

Climate, audio and navigation controls are refreshingly easy to use, with a combination of voice recognition, 10.2-inch touch screen, and most important, buttons and dials for frequently used audio and climate settings.

You might ask what more a person could ask for, if you’d never been in Ford Expedition King Ranch or Platinum, or even a Ram Laramie Longhorn pickup. They have unexpected design flourishes, like the Ram’s hand-branded wood trim and saddle bag-style map pockets.

In that context, the Tahoe’s faux wood trim seems like a glaring omission, undermining the interior’s virtues: space, comfort and generally attractive and appealing materials.

The Tahoe’s interior does have plenty of appealing features, including a panoramic sun roof and a motorized storage bin in the center console that slides back for access by second-row passengers.

GM’s safety alert seats are among the auto industry’s best features, vibrating the driver seat’s front or side cushions in response to obstacles and oncoming vehicles. It may sound distracting, but quickly becomes second nature. I prefer it to alerts that beep or flash lights.