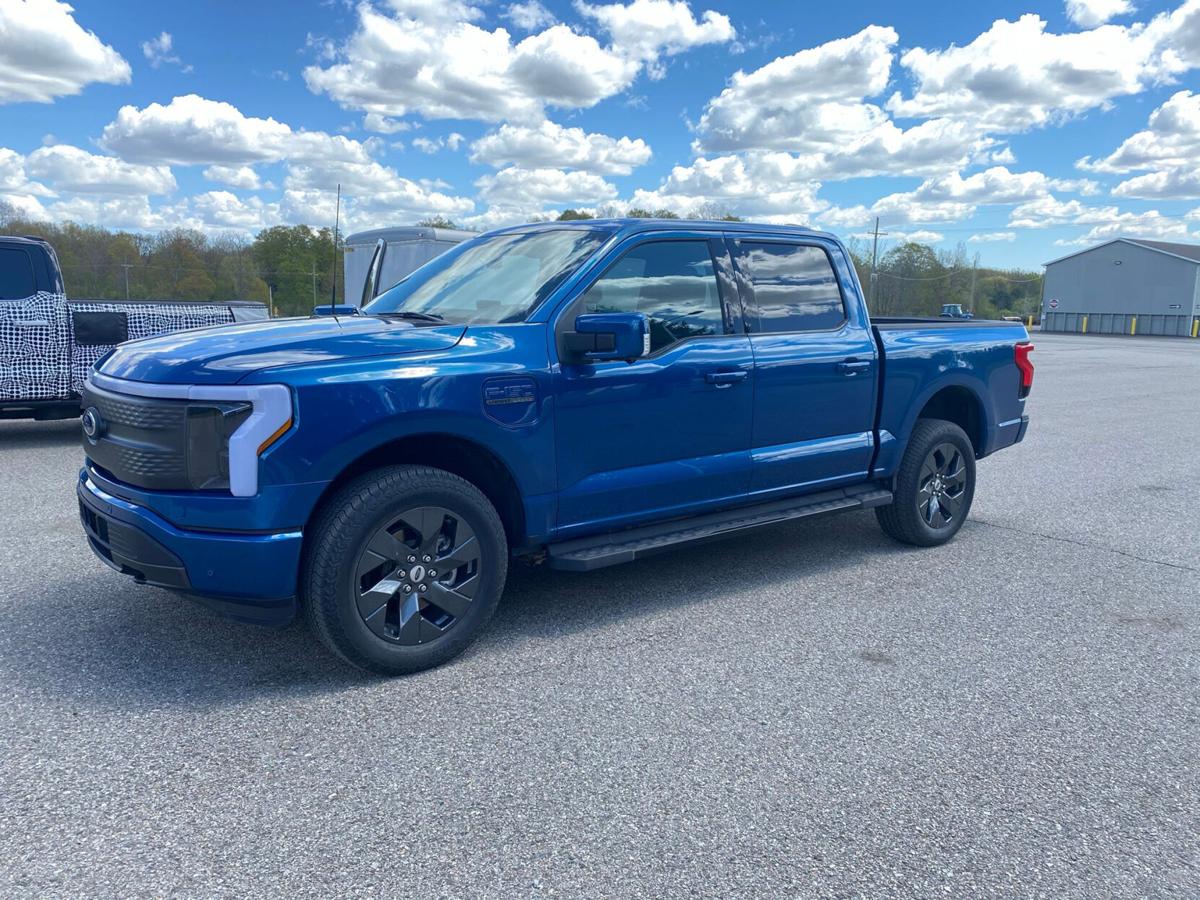 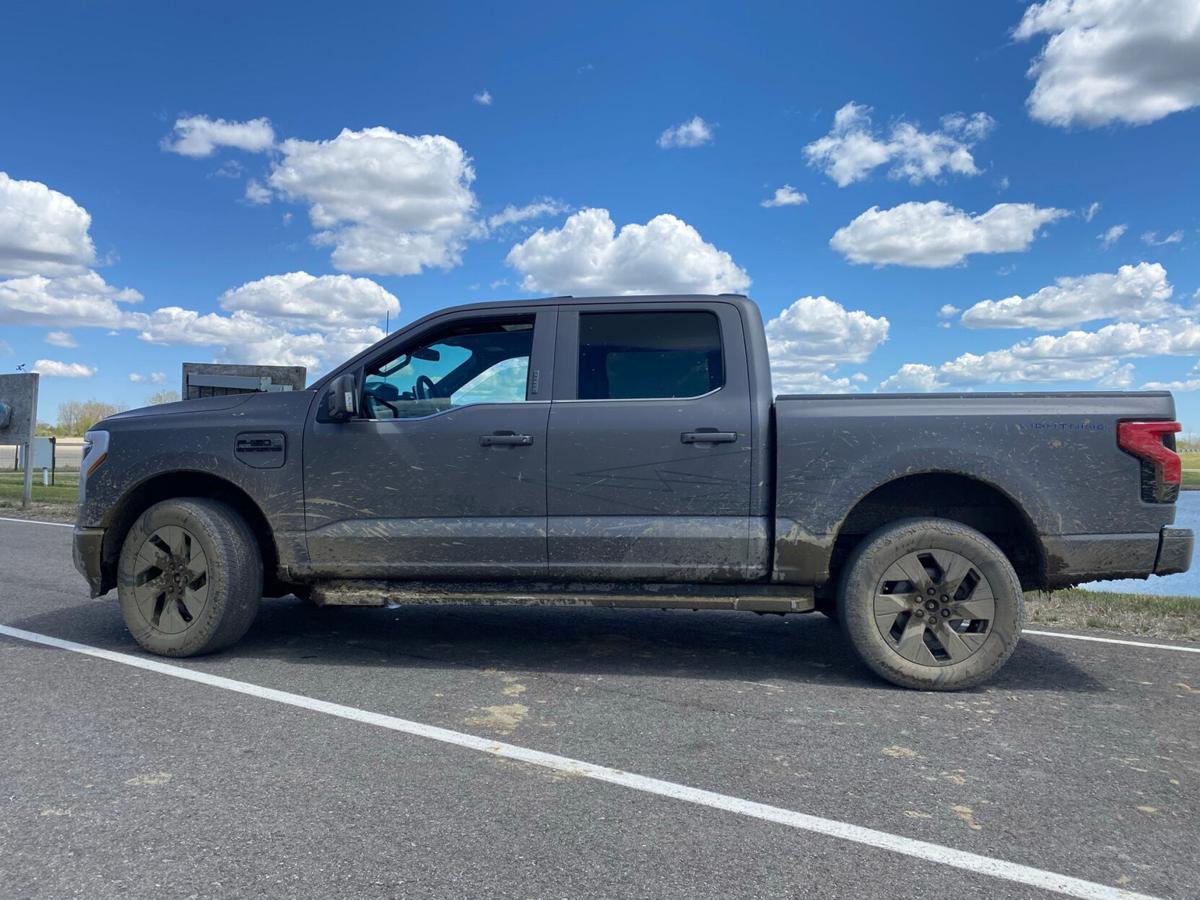 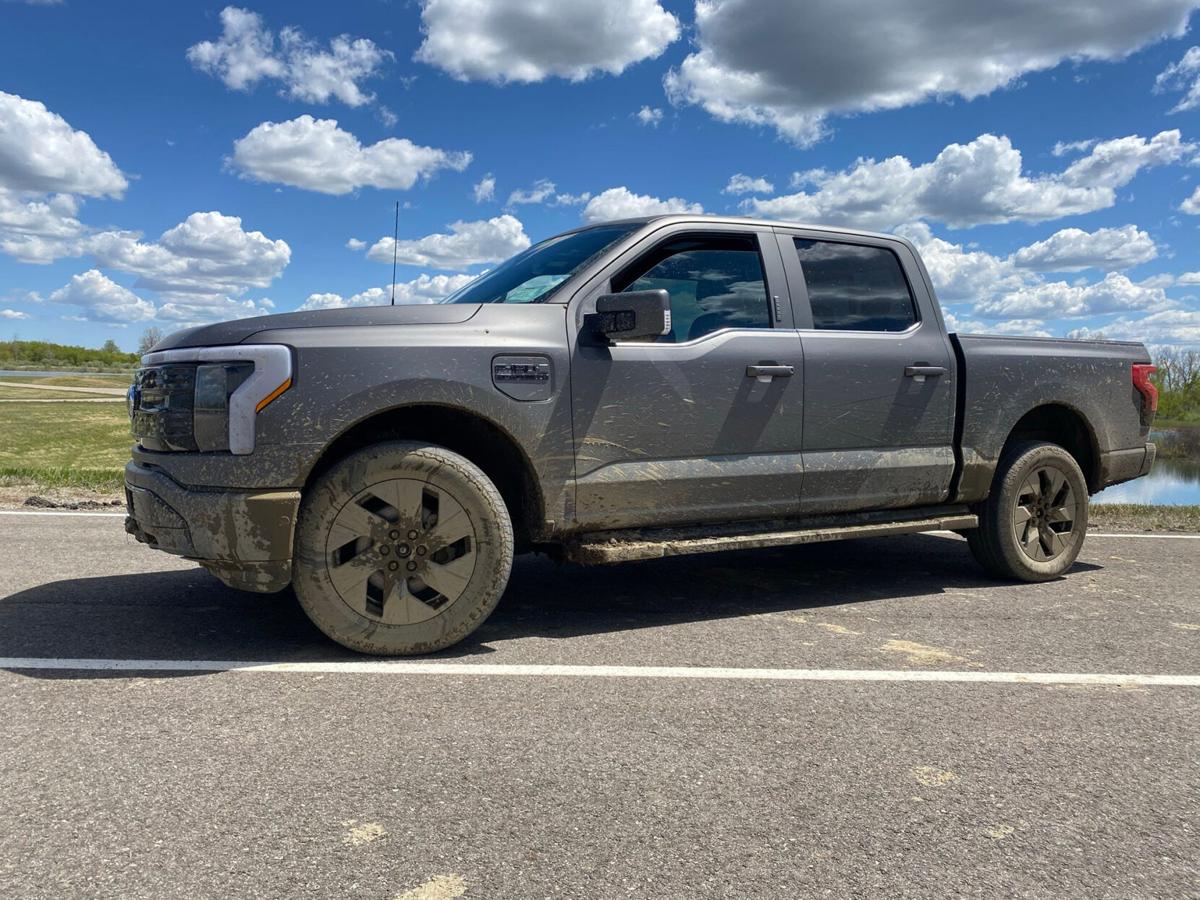 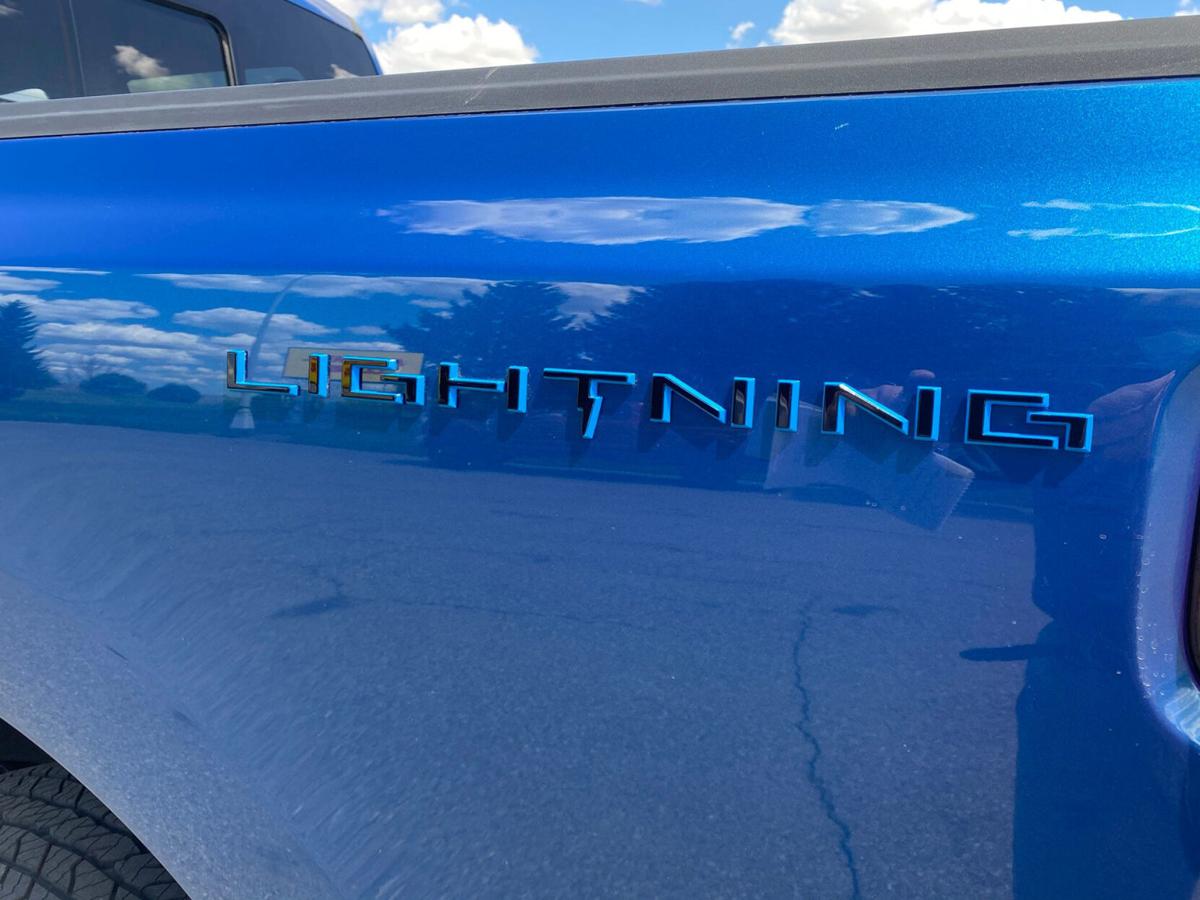 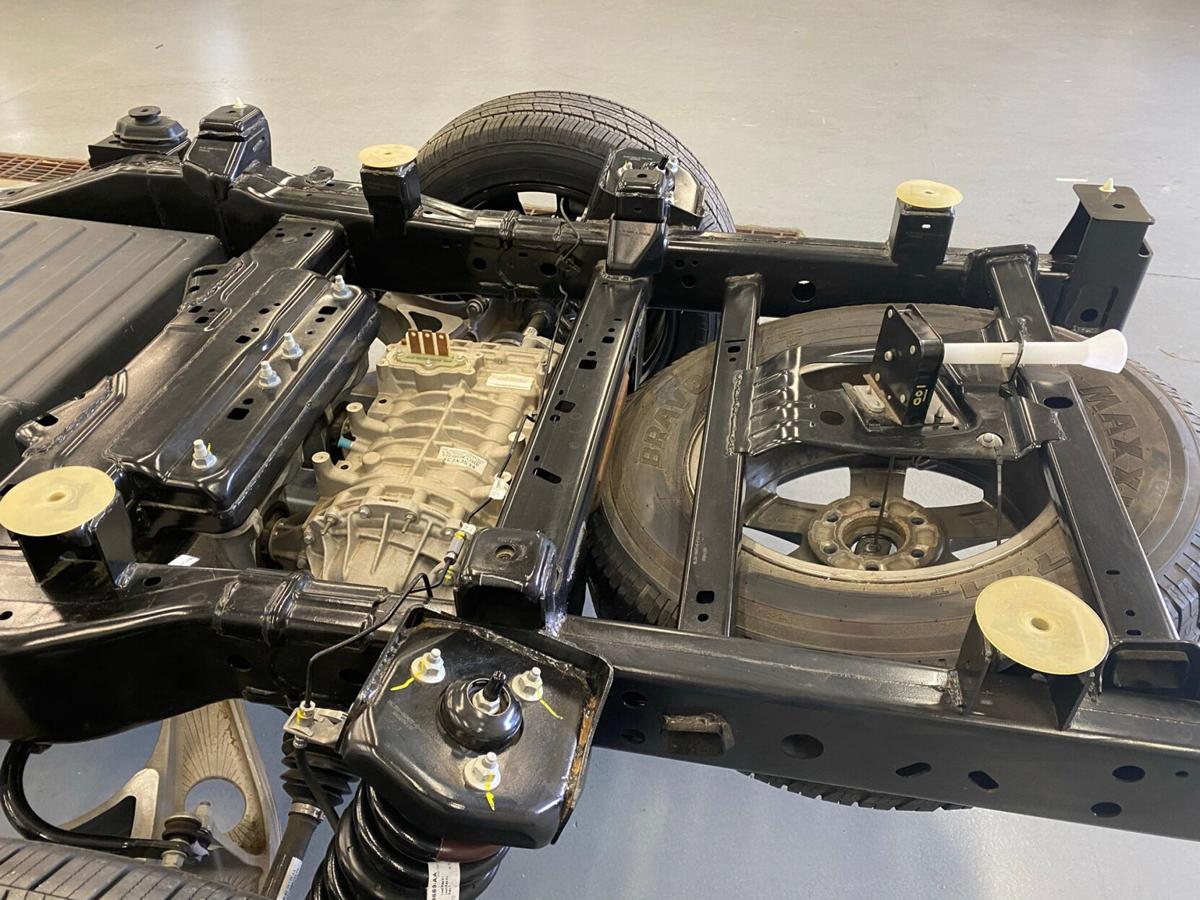 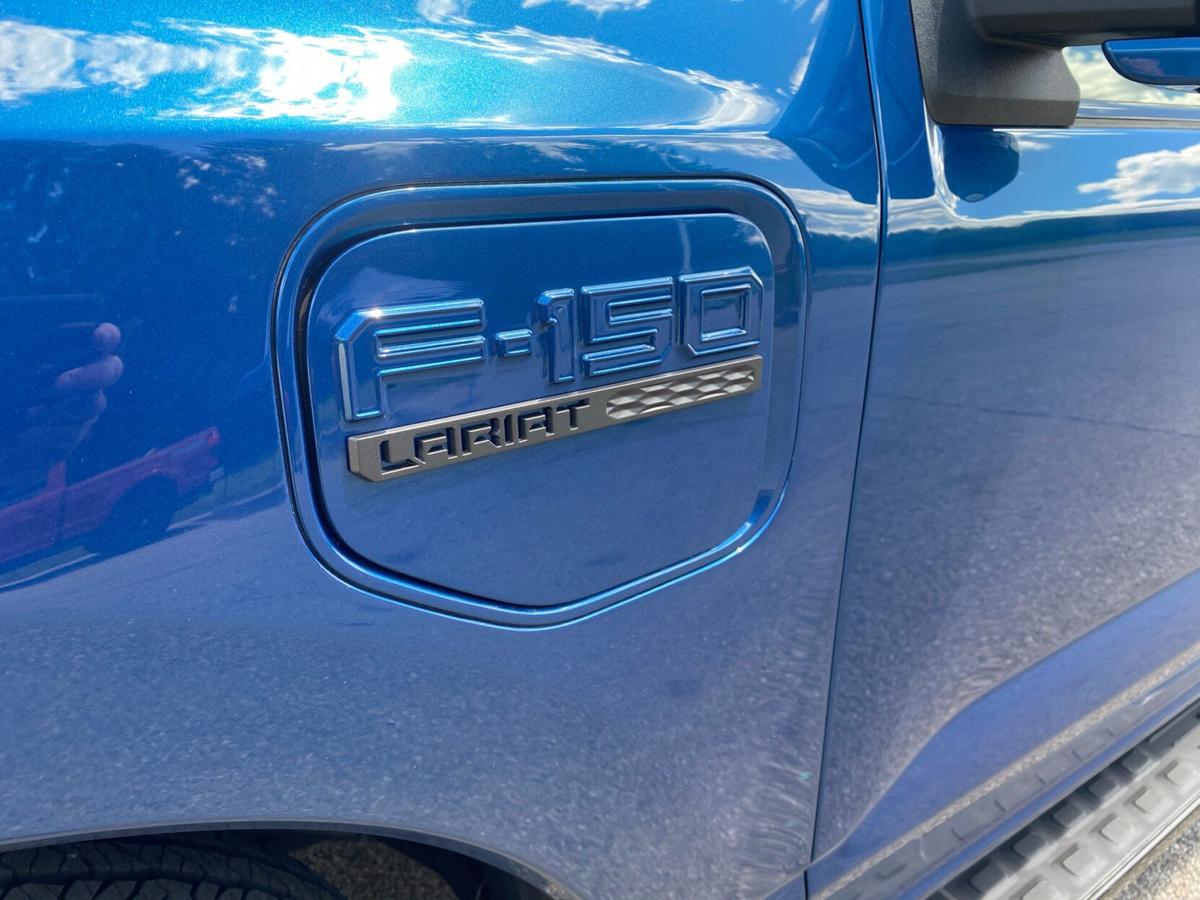 The 2022 Ford F-150 Lightning electric pickup has charging doors on either front fender, but only the driver’s side is real. (Mark Phelan/Detroit Free Press/TNS) 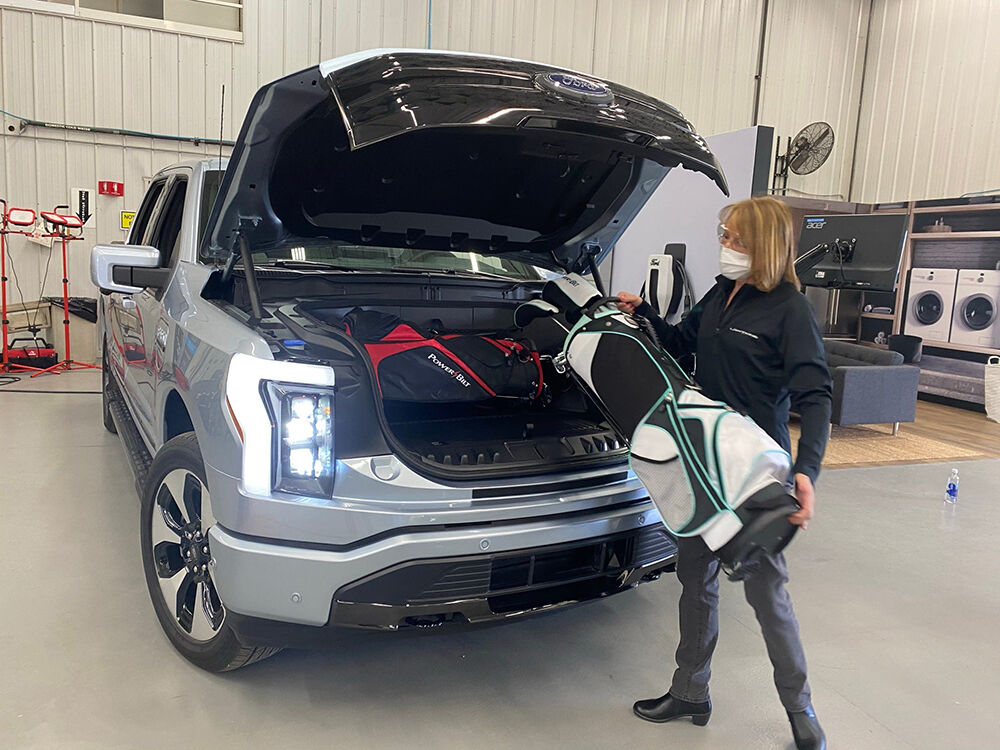 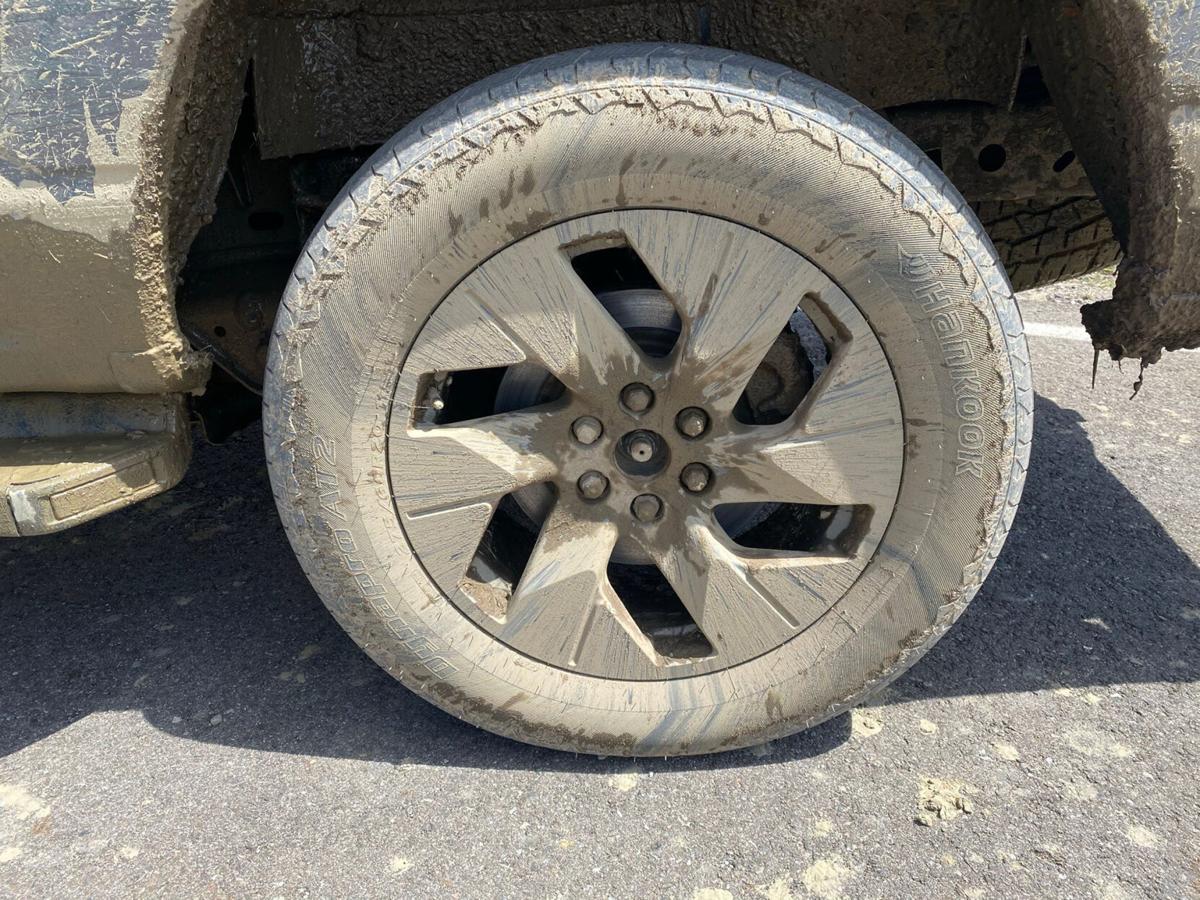 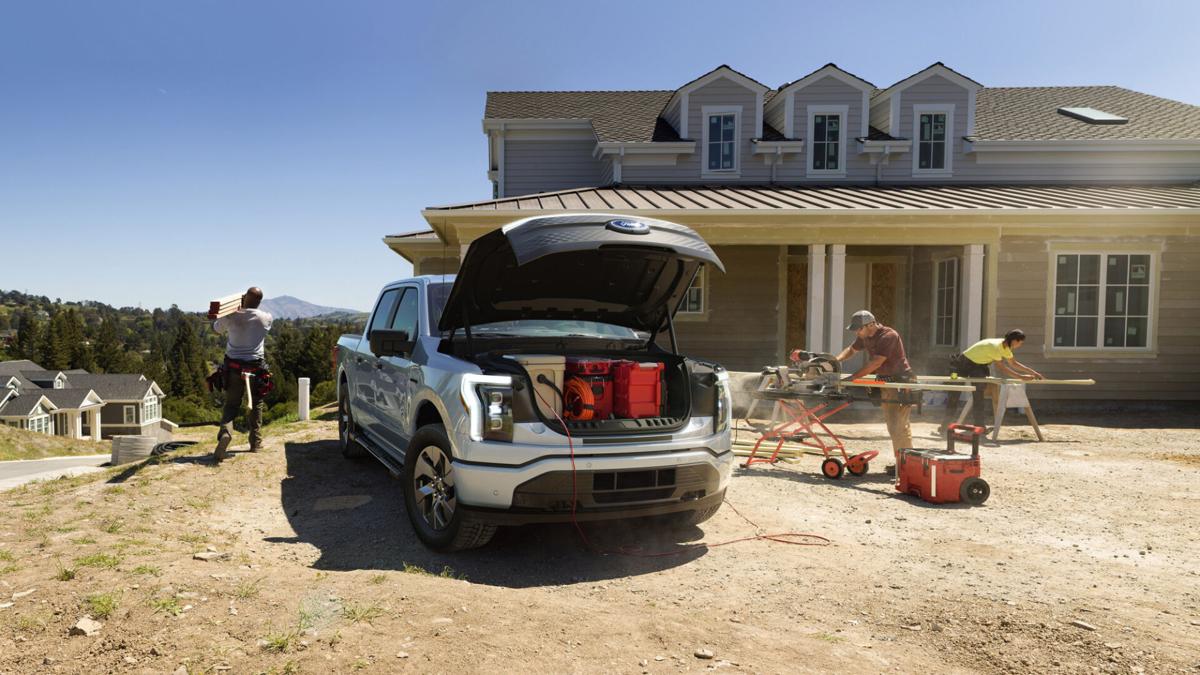 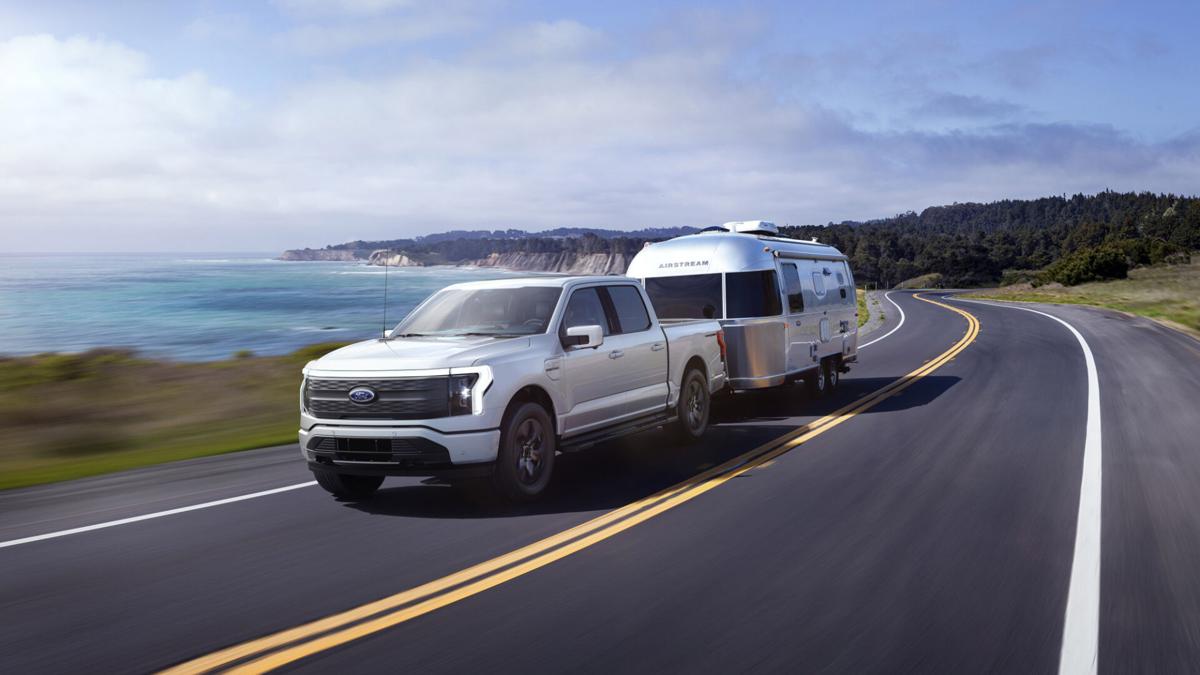 The 2022 Ford F-150 Lightning electric pickup has charging doors on either front fender, but only the driver’s side is real. (Mark Phelan/Detroit Free Press/TNS)

Ford Motor Co. put down a multibillion-dollar bet that lightning will strike twice in the same place Wednesday night when it revealed an all-electric version of America’s bestselling vehicle, the F-150 pickup, on a massive outdoor wall of video screens at company HQ in Dearborn, Mich.

The 2022 F-150 Lightning aims to drive electric vehicles into the heart of the U.S. car market, leading the next transportation revolution in the same way the company did more than a century ago when the Model T put the world on wheels as the first automobile an average worker could afford and use every day.

With prices starting at $39,745 and the kind of features and capability that have made the F-150 America’s bestselling vehicle for 44 years, the F-150 Lightning was designed to do all the things pickup owners expect — plus new goodies only an electric vehicle can deliver.

Most previous EVs have been either small, almost experimental, vehicles or expensive specialty models. The F-150 Lightning heralds EV technology’s entry to the heart of the U.S. vehicle market.

The pickup is a cornerstone of Ford’s $22 billion investment in electric vehicles that began with the Mustang Mach-E sporty SUV last year. Lightning sales should begin next spring.

“Ford knows what pickup owners want,” IHS Markit senior analyst Stephanie Brinley said. “This is just the beginning of what the electric F-150 will be.”

The F-150 Lightning’s basic structure, body and running gear are unique, but Ford tested the electric truck to the same durability and capability standards as the conventional F-150. The Lightning will be built at Ford’s historic Rouge assembly complex, which also makes the regular F-150 — a few miles from company headquarters in Dearborn. All Lightnings will have four-door crew cabs.

The Lightning promises to be powerful and fast. Two electric motors — one mounted on each axle — provide all-wheel drive that will precisely deliver power to any wheel for towing and challenging off-road conditions.

The motors develop 563 horsepower and 775 pound-feet of torque.

Ford claims a sport sedan-like mid-4-second, 0-60 mph time in addition to the ability to tow up to 10,000 pounds and haul a payload of up to 2,000 pounds in the five-passenger cab and bed.

In addition to automated parking, the Lightning can automatically back up to a trailer, freeing the driver from all the work except securing the hitch.

The Lightning’s standard full-time four-wheel-drive system has normal, off-road, towing and sport modes. The underbody uses full-length metal shields to protect the motors and lithium-ion battery, all located within the rails of the Lightning’s frame.

The rear suspension is independent, a first for the F-150 that should lead to a significantly smoother ride.

The sleek body is unique to the EV, but the interior carries over the space and key features F-150 owners expect.

The most obvious outer changes include LED head and tail lights and light bars running the full width of the hood and tailgate. The body is new and sleek. Aerodynamic 22-inch wheels complement that styling.

In place of an internal combustion engine, or ICE, power plant, there’s a big front trunk — or “frunk” — with 400 liters or about 14 cubic feet of space, including a small drainable underfloor compartment. Big enough for two standard golf bags, it accommodates up to 400 pounds and has four power outlets and two USB chargers to deliver up to 2.4 kilowatts of power.

LED lights mounted in the hood light the cargo space so it’s easy to find gear at night.

The black grill is part of the hood, giving the compartment a low opening for easy loading and unloading.

The five-passenger cabin retains most features and controls from the big interior change, plus the addition of a large 15.5-inch touch screen for top models. It’s in the vertical, tablet-style, orientation, unlike the ICE F-150’s horizontal, landscape orientation.

Most of the interior will be familiar to F-150 owners. That serves two purposes. It preserves popular features like a shifter that disappears into the console to create a flat, laptop friendly, workspace while also allowing business customers to do the same things in a Lightning they already do in ICE F-150s.

The inside of the cargo box is identical, a conscious decision to make it easy for businesses that use the ICE F-150 to adopt the Lighting without having to get new toolboxes and other expensive equipment.

The tailgate also retains popular features like a step for easy access and a ruler for measuring jobs.

“We’re not here to make an electric truck for the few — Ford is committed to building one that solves real problems for real people,” said Kumar Galhotra, Ford president of Americas and international markets.

An EV to power your house or business

The Lightning’s battery can run multiple lights and tools at a job site and power the pickup for an 80-mile round trip to work for about three days, Ford said. It also has enough power to keep a house going for several days in a blackout.

An update that should be available after sales begin will even allow owners to charge the Lightning at home during off-peak electric late-night rates and use that power to run their house at a lower cost the next day.

Power outlets in the bed can deliver up to 7.2 kilowatts of power on top of the front outlets’ 2.4 kW for 9.6 kW of total power.

In fact, Biden raved about the F-150 Lightning and what EVs can do for jobs, U.S. competitiveness and manufacturing during a visit to the Rouge plant in Dearborn on Tuesday.

The F-150 Lighting is the first EV pickup to reveal this much detail about pricing, features and capability, but several others may go on sale in 2022, including the offbeat Tesla Cyber truck, upscale models from Rivian and Bollinger — and F-150 archrival, the Chevrolet Silverado.

Ford’s advance look at the Lightning stole this round of the publicity battle, but it remains to be seen which company will hit on the right combination of price and features, and how many American buyers and businesses are ready for an electric pickup. A lot will also depend on information Ford hasn’t revealed yet, including charging times at varying voltages.

“There’s much we don’t know about the EV pickup market,” Krebs said. “How big is it? Are these traditional truck buyers, or are these people who haven’t purchased a truck before but are interested now that electric is an option?

“Who will these buyers purchase from — a traditional truck maker, with decades of expertise in truck making, or an upstart like Tesla, Rivian, etc.?”