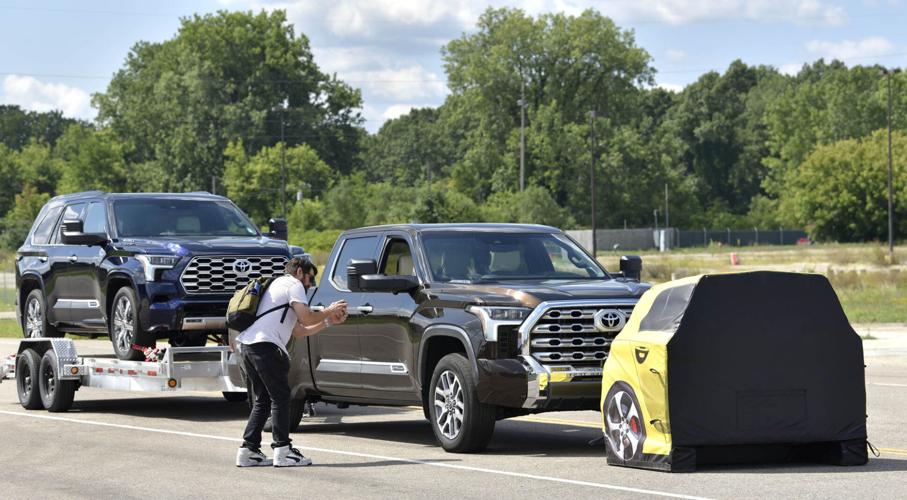 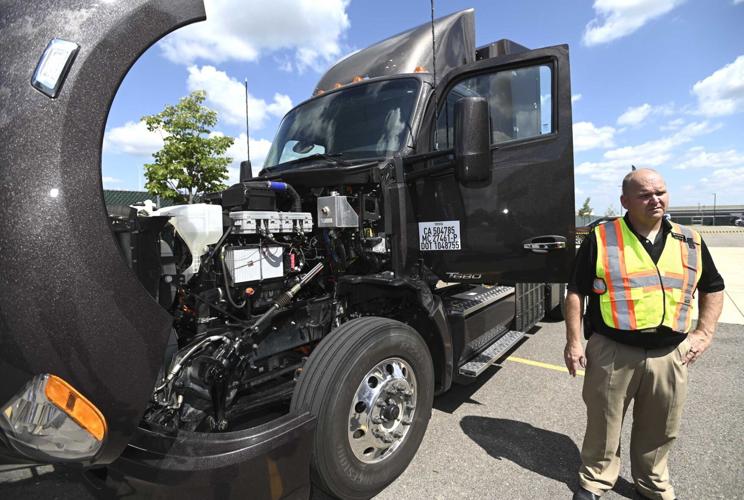 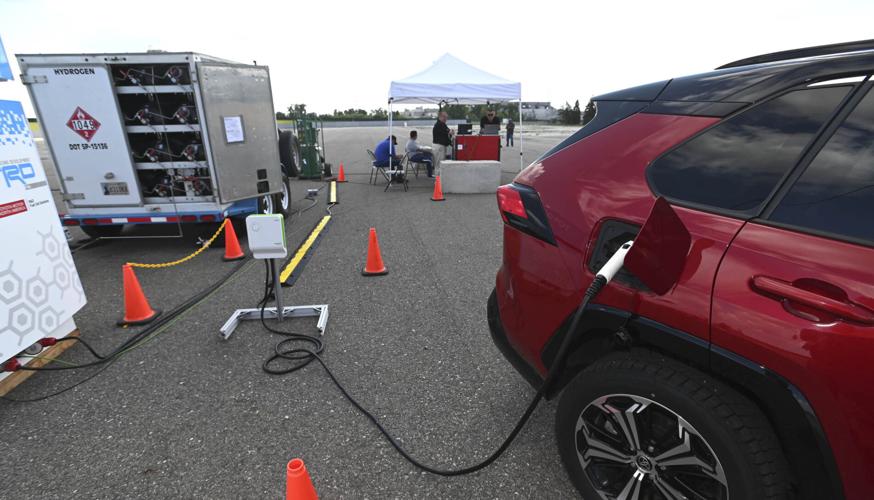 YORK TOWNSHIP AND YPSILANTI, Mich. — Toyota Motor Co. may not be the first company that comes to mind when it comes to Michigan automakers, but the Japanese carmaker says the state is playing a key role in the research and development of new products and technologies.

Research, design and development of North American SUVs and trucks is happening at Toyota’s facilities in Washtenaw County. It’s making and testing autonomous vehicles here, as well as performing safety tests for federal regulators and other organizations. The technology and innovation being produced are significant in Toyota’s transformation toward its connected, multi-pronged powertrain future.

“This is a Toyota success story, but it is also a Michigan success story,” Shinichi Yasui, executive vice president of Toyota Motor North America Research & Development, said during a tour of its R&D center. “Michigan, as we all know, is a global capital of the auto industry. It is a state that brought mobility to the world.”

The company celebrates 50 years of design and research in Ann Arbor this year. After more than $8 billion in investment, it has grown from a few people focused on North American certification to more than 1,800 employees today at the company’s largest R&D center outside Japan. Its responsibilities include product development, engineering, design, vehicle evaluation, powertrain, advanced research and purchasing functions. Michigan is home to the company’s only full-scale crash test facility outside Japan to support full vehicle development.

“They truly believe that Michigan is the center,” said Glenn Steven, executive director of MICHauto, the mobility arm of the Detroit Regional Chamber. “There are other centers and other areas of expertise, but none have the density or cluster of OEMS, suppliers and technology.”

The center tripled in size as it took over more of the development for vehicles like the Tundra pickup truck and Sequoia SUV based on the platforms that are designed in Japan. The U.S. also leads design and development responsibilities for the Avalon sedan, Sienna minivan and Tacoma midsize pickup.

“It’s really getting those needs and what we need that platform to do, and then all of the styling and upper body and detailed work is executed by North America,” said Stephen Provost, vehicle performance leader at the company’s technical center here.

Efforts also extend into the alternative fuel space. That includes hybrid and battery-electric products as well as hydrogen fuel-cell powertrains. Toyota has emphasized the need for more than one solution to leaving behind gas and diesel.

“Whether they live in a house with a garage where it’s easy to charge at night, whether they live in a city where it’s more difficult to do that,” said Gill Pratt, chief scientist of Toyota Motor Corp. and CEO of the Toyota Research Institute, “we want to provide each person with the way that they contribute the most to solving climate change. And we know that that answer is not to treat everybody the same way. If we do treat everyone the same, that will not result in as much carbon reduction as if we actually have a solution that suits every customer, that’s customized to each person.

“And so by giving people the flexibility to people to contribute the most that they can in their part of the world with their circumstance, we believe that will achieve the most net climate and carbon reduction to help with climate change in the future.”

The company’s Class 8 hydrogen fuel cell-powered semi truck was conceived and developed out of its Michigan office, and modules for the truck with a 300-mile range are expected to begin production next year in Kentucky. Other applications for fuel cells are being looked at for marine, busing and stationary power applications.

“There’s still a market for it,” Richard Ferguson, principal engineer of fuel cell integration, said of light-duty uses for hydrogen fuel cells. “There’s still a market for it, and of course that helps to build our infrastructure to having more vehicles on the road, which gives manufacturers and stations more incentivize to build. So, yes, we strongly do believe in the lightweight market, and it helps the mark volume as well helps to bring down the cost for the rest of our customers.”

Because of Toyota’s emphasis on diverse alternatives to fossil fuels, it has been seen as less aggressive on all-electric vehicles, despite its early leadership in hybrid technologies. The automaker, however, has announced plans for a battery plant in Liberty, North Carolina, that will open in 2025.

“We’re definitely absolutely studying the needs as needed for additional volume production either at that plant or other plants,” said Jordan Choby, vice president of powertrain control.

For now, its 2023 EVs won’t qualify for the new $7,500 tax credits President Joe Biden signed into law this month, and it’s not sure when it will. Because of North American requirements for vehicle assembly and supplier sourcing, few vehicles currently qualify under the legislation known as the Inflation Reduction Act. Over time, those requirements gradually increase.

“There are still a lot of things we’re studying about the Inflation Reduction Act that hasn’t come into effect yet,” said Ryan Grimm, vice president of purchasing supplier development. “But there are a lot of provisions that we are studying to answer exactly when we can achieve that.”

Choby said the legislation might help to accelerate Toyota’s plans, though not dramatically. Grimm wasn’t able to comment on whether the company will have a disadvantage in pricing, but said based on the work the company is doing around supply chains, Toyota will be competitive in the market even without immediate access to the subsidy.

“China has a lot of capability and a lot of the market share for certain sub processing of some of the materials,” Grimm said. “We are actively studying those options or other alternatives. I don’t have any clear answers specifically, if we can completely de-risk ourselves. That’s certainly the direction that we are going in terms of looking at all the different regions, all the different opportunities, and all the different zones.”

Leaders on Wednesday didn’t discuss whether that could mean new manufacturing opportunities in Michigan. Small-scale manufacturing done in the state includes 3D printing, prototypes and the Innovation & Monozukuri Lab, which produces up to 400 vehicles for a single project, said Bryan Hlavaty, senior manager or prototype development.

“The ability to do that here,” said Kristen Tabar, group vice president of vehicle development and engineering, “is certainly fostered from the collaboration that we have from our local supplier partners and our local competitors who really centralized that talent for automotive development in this part of the world as part of North America.”

These prototypes can be used for safety and crash tests on-site. The 155,000-square-foot facility does about four tests each week as well as simulated tests. In a front rigid barrier crash test on Wednesday, the airbags in the Tundra deployed after hitting the concrete barrier head-on at about 31 mph, and the hood crumpled.

“You’ll walk away from that crash,” said Don Federico, vice president of vehicle performance development, noting the human test dummies, which at $1 million each are double the cost of the prototype vehicles themselves, have 160 sensors and last about three years.

“If the crash is done in Japan,” Federico said of the facility, “how do we as designers and engineers react to that?”

The Michigan lab also outfits vehicles with autonomous technologies. Ann Arbor-based startup May Mobility, one of the companies supported by the automaker’s $500 million venture capital arm, is deploying five minivans this fall to offer an on-demand public transit service with 70 stops in rural Grand Rapids, Minnesota, the 11th city it will have launched an autonomous service. May Mobility has used Lexus vehicles in the past, too.

Toyota also emphasized that artificial intelligence can amplify the abilities of drivers, too, such as drifting into a tighter maneuver to avoid a surprise obstacle in the way. The company is expanding its facility and partnership with the American Center for Mobility at Willow Run Airport in Ypsilanti for more testing. It’s investing $6 million for a five-year lease there and has named a portion of the test track the Mobility4All Parkway. The facility can support 95% of Toyota’s advanced driver-assistance system testing needs, the rest of which is conducted in Fowlerville or at its Arizona proving grounds, said Nick Sitarski, vice president of integrated vehicle systems for Toyota North America R&D.

Toyota also demonstrated its trailer pre-collision system that halted a Tundra at about 20 mph pulling an 8,500-pound Sequoia on a trailer before it hit a representation of another vehicle. Another demonstration showed a proof-of-concept hitch-less towing system, a development from an idea proposed by a brake engineer in the chassis design department. The system has one vehicle following another using sensors, location information and communication between the vehicles. Further testing of the technology is starting at ACM in the next year.

“Everything you have seen today has its roots in Michigan,” Sitarski said. “I can’t think of a better region in the world to be doing this type of work.”