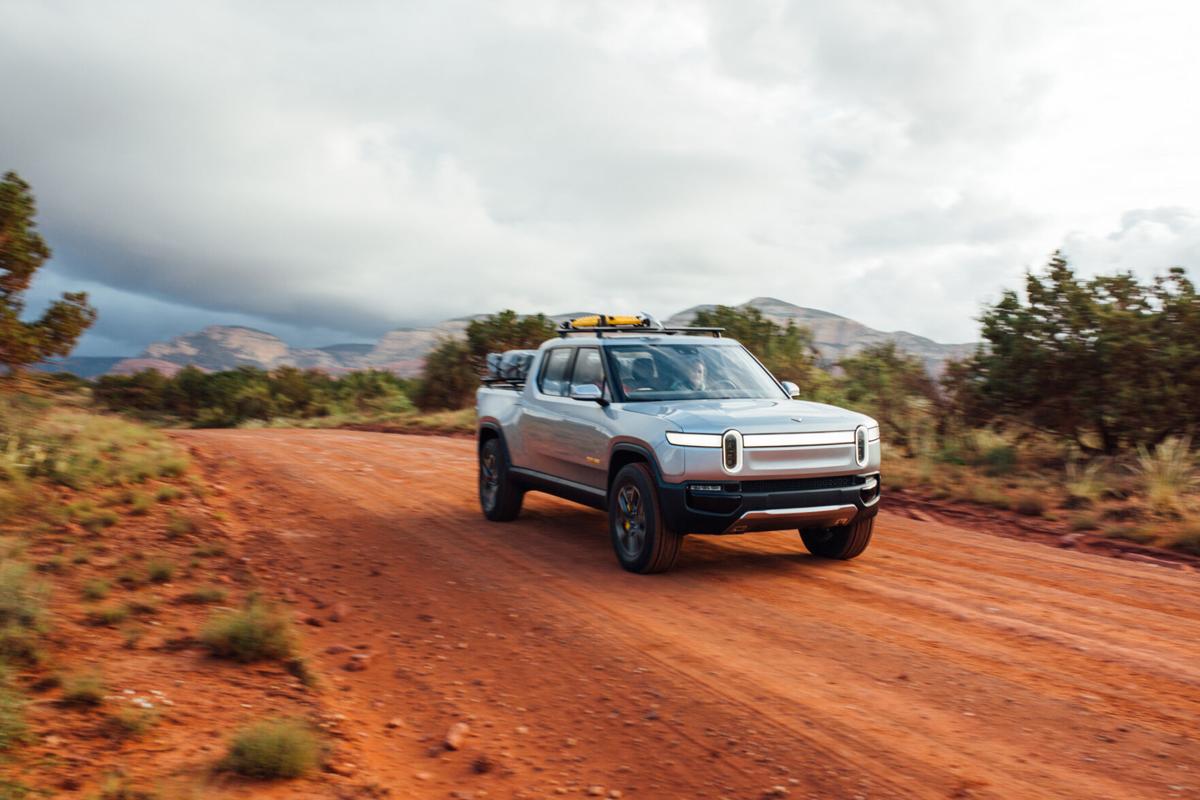 Rivian, an automotive startup with an engineering base outside Detroit in Plymouth Township, unveiled its five-passenger R1T electric pickup concept in conjunction with the 2018 LA Auto Show. Rivian/TNS 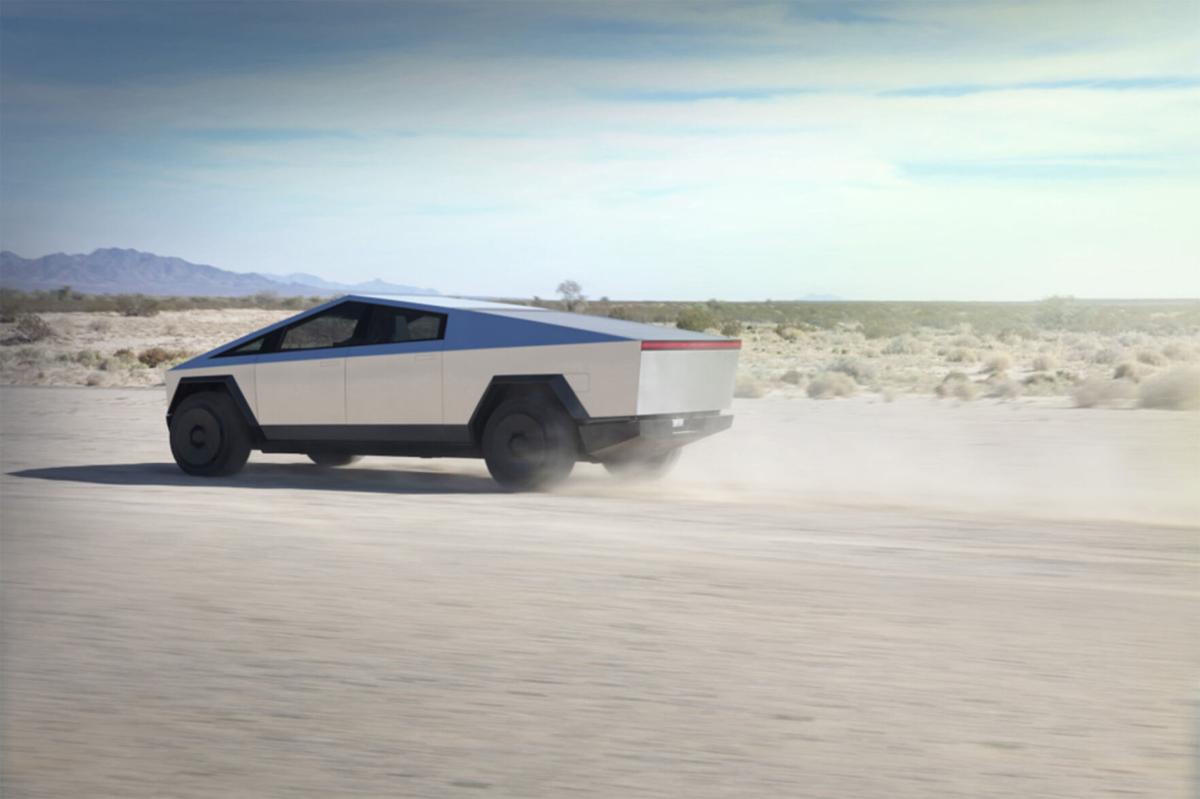 The Tesla Cybertruck that debuted in November is one of five electric pickup trucks scheduled to go on sale in the next two years. Tesla/TNS 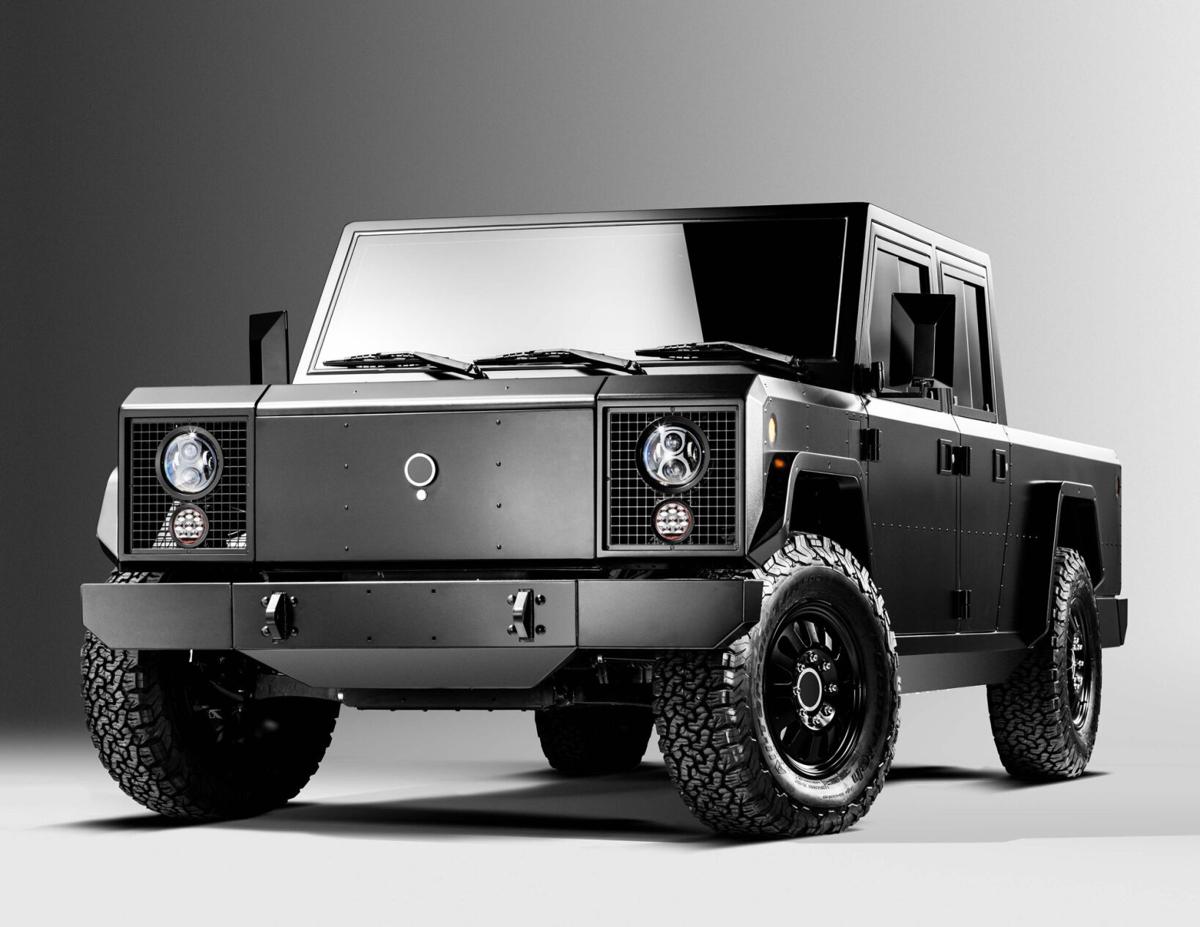 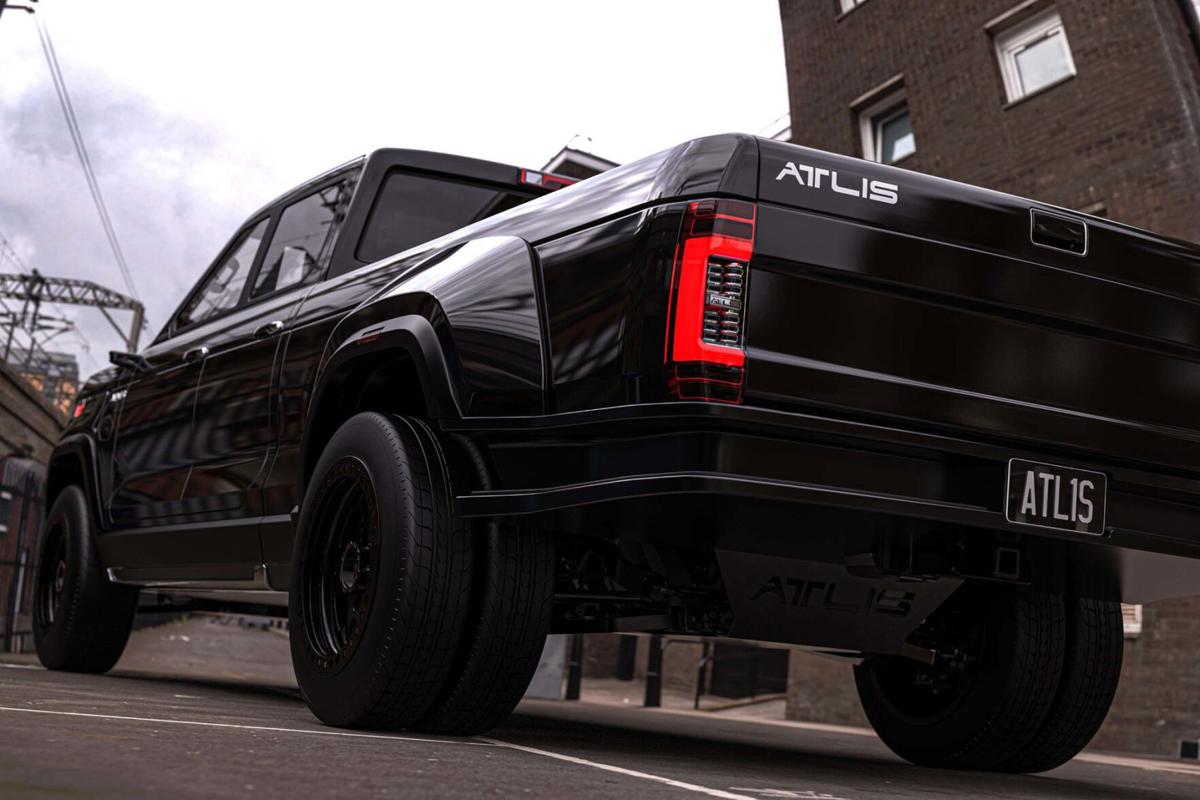 Rivian, an automotive startup with an engineering base outside Detroit in Plymouth Township, unveiled its five-passenger R1T electric pickup concept in conjunction with the 2018 LA Auto Show. Rivian/TNS

The Tesla Cybertruck that debuted in November is one of five electric pickup trucks scheduled to go on sale in the next two years. Tesla/TNS

Not since the early 20th century have there been so many startups in the U.S. auto industry.

Add Phoenix, Ariz.-based Atlis Motor Vehicles to a growing list of electric-vehicle startups across the United States — Rivian Automotive, Nikola Corp., Lordstown Motors Corp. and Bollinger Motors among them — seeking to make their marks. The surge in 21st-century startups is inspired by the meteoric success of Silicon Valley EV-maker Tesla Inc. as well as government regulations that for the first time mandate the powertrains automakers must use.

Upstart automaker Atlis Motor Vehicles is betting its Atlis XT electric pickup can compete against the Detroit 3. The Phoenix-based company plans to put the truck on the market late next year.

But where automakers a century ago were pioneers on the Industrial Revolution’s transportation frontier, today’s startups face formidable challenges from established Detroit-based and foreign automakers jockeying for the same space in a still-undefined consumer market. The competition is stiff and well-financed.

General Motors Co.’s Cadillac is going electric and its GMC unit has a new Hummer EV. Ford Motor Co. and Fiat Chrysler Automobiles’ Ram have electric pickups in the works. German rivals including Volkswagen and BMW intensify the competition.

Those legacy makers hold a big advantage in access to capital to build factories, manage distribution and establish dealer networks. But startups benefit from efficiencies created by in 21st century, including online marketing and low-maintenance electric powertrains.

Founded by Mark Hanchett, the Atlis XT pickup is aimed at the commercial vehicle market instead of the luxury niche targeted by Rivian and Hummer. Atlis promises a pickup starting at $45,000 with a flexible electric platform that fleet customers can configure to their own specifications.

“Organizations like Atlas are really looking at a much bigger picture,” Hanchett said in an interview. “It’s perfect for fleet owners. Electric technology is superior to the diesel technology that’s out there today.”

Hanchett breaks through the noise with a bold claim: that his trucks can recharge up to 500 miles on the Atlis high-speed charging network in just 15 minutes — competitive with the diesel trucks that dominate today’s market.

With a motor at each wheel, the Rivian pickup can spin left- and right-side wheels simultaneously in opposite directions to turn donuts in its own tracks like an Army tank.

The variety of planned EVs is broad, reminiscent of the early 1900s. The Industrial Revolution’s innovation of gas and steam engines were the perfect spark for the horseless carriage. The Duryea Motor Coach Co. launched the auto revolution in 1896 with the first gas-powered motorcar.

The first decade of the 20th century saw anywhere from 500 to 1,500 startup automakers (depending on the source) in the U.S. They ranged from names that would become familiar like Oldsmobile and Cadillac, to forgotten shops like Pope Hartford and the Thomas B. Jeffery Co. But when Ford Motor Co. broke through with mass manufacturing in 1913, boutique automakers found themselves in trouble.

“Capital became a huge factor,” said Matt Anderson, curator of automotive history for The Henry Ford Museum in Dearborn. “You had to have resources for manufacturing and then to weather World War I and the Great Depression.”

The demands of mass production inspired relentless consolidation as General Motors, for example, gobbled up Buick, Olds, Cadillac and Oakland. By 1929 the number of U.S. automakers was fewer than 50 with some 80% of production coming from GM, Ford and Chrysler. Ahead of the current wave, the last auto startups were Tucker Corp. and Kaiser Motors just after World War II.

The challenge of competing against the auto behemoths remains as true today as it was then. But the nature of EVs means that startup costs are much less than they have been for gas-powered vehicles in an industry whose barriers to entry historically have been high.

“A traditional gas-car company required $3 billion before you even put a spade in the ground,” said auto consultant Joe Phillipi, a veteran auto investment analyst who worked on Wall Street for decades. “Developing the powertrain, transmission, electronics were cost-prohibitive. But these new electric automakers have simpler powertrains, don’t have to worry about regulatory validation for emissions, and in some cases can outsource their production.”

California-based startup Fisker Inc. is one of the latter. Led by ex-Aston Martin designer Henrik Fisker, the company announced this fall that its $37,499 compact SUV, the Ocean, will be produced by Austrian supplier Magna Steyr.

Further reducing costs, the Ocean will be made on Magna’s own EV architecture. Fisker’s design will be coupled with off-the-shelf items from suppliers with Magna overseeing the car’s assembly. Magna has previously showcased an EV prototype for Sony and has experience assembling gas vehicles like Mercedes’ G-wagon SUV.

Atlis is a more-vertical company in the mode of Tesla. It not only builds its own vehicles, but also a proprietary charging infrastructure and battery cells. Ditto the plan for Atlis.

Atlis’ priority is raising capital, which has been plentiful for upstart EV makers. The biggest sources of cash: U.S. equity markets, venture-capital investors and sovereign investment funds from countries like Saudi Arabia. Even such legacy automakers as Ford, an investor in Rivian, are active in the space.

Hanchett is pursuing an initial raise of $25 million for battery development and charging infrastructure before revving up vehicle production in late 2021 with a second round of financing.

“There are billions in capital out there from venture funds across the world,” said consultant Phillipi. “The Saudis are investing heavily in this technology because they want to diversify beyond oil for the next wave of transportation.”

He adds that truck makers Atlis, Lordstown and Rivian — while not ruling out retail orders — are directly dealing with fleet customers to cut inventory costs, a major expense for legacy automakers that traditionally sell through dealer networks.

“We don’t see anybody in our lane,” Lordstown CEO Steve Burns told The Detroit News of his Endurance truck. “There is nobody with a full-size truck for workers priced in this range, and it is hard to get a lane to yourself in modern-day automotive.”

Even as these EV startups seek to upend Detroit’s three automakers’ hold on the truck market, they have a symbiotic relationship with them.

Besides GM’s investment in Lordstown, GM is working on a deal to partner with Phoenix-based Nikola to make electric and fuel-cell trucks together, including Nikola’s Badger truck. When announced in September, the deal was to give GM and 11% stake in the company.

Even Tesla, which claimed the best-selling luxury car in 2018 with its Model 3, is dependent on legacy automakers. The company would be unprofitable were it not for selling emissions credits to gas vehicle-producing manufacturers so that they stay in compliance with, for example, California’s stringent emissions rules.

Already this year, Tesla has banked $1.2 billion in emissions credits across the globe. Not just Detroit automakers, but Japanese makers like Honda which — under heavy pressure from European regulators to reduce its CO2 footprint — paid Tesla for credits after disappointing sales for its highly touted electric Honda E.

Twenty years on from the debut of the Toyota Prius gas-electric hybrid, electrified cars were just 4.1% of U.S. sales in 2019, according to the U.S. Department of Energy, even as startups and legacy automakers tool up to flood the market with new electric models.

A century later, innovators like Tesla’s Elon Musk and Atlis’ Hanchett say advanced battery technology has given them a new advantage over gas competitors. Both entrepreneurs had previous success with technology firms, not automakers.

“I’m not a fan of government intervention,” said Hanchett. “I’m a big fan of building products that move us forward.”

Now the legacy makers are scrambling to catch up by purchasing stakes in EV makers, tracking their advances, and creating startup-like projects of their own including GMC’s Hummer EV and the Ford Mustang Mach-E.

These startups are all developing electric pickup trucks to compete with Detroit’s three automakers:

Bollinger Motors: Founded by successful New York cosmetics businessman Robert Bollinger in the Catskills, the company moved to Oak Park, Michigan, to fully develop its B1 and B2 pickup trucks and related SUV. Due in 2021.

Lordstown Motors: Founded in 2018 with manufacturing in the GM’s former Lordstown Assembly in northeast Ohio. Led by entrepreneur Steve Burns, it expects to begin deliveries of its fleet-focused Endurance pickup in early 2021.

Nikola Corp.: Founded in 2014, now located in Phoenix. It has promised a number of EVs, most prominently the Badger pickup with deliveries due in 2022. Nikola is in negotiations with GM for a partnership.

Tesla Inc.: Founded in 2003 and led by CEO Elon Musk since 2008, the Palo Alto company’s Model S sedan redefined EVs as premium performance cars. Its Cybertruck pickup is due in late 2021.