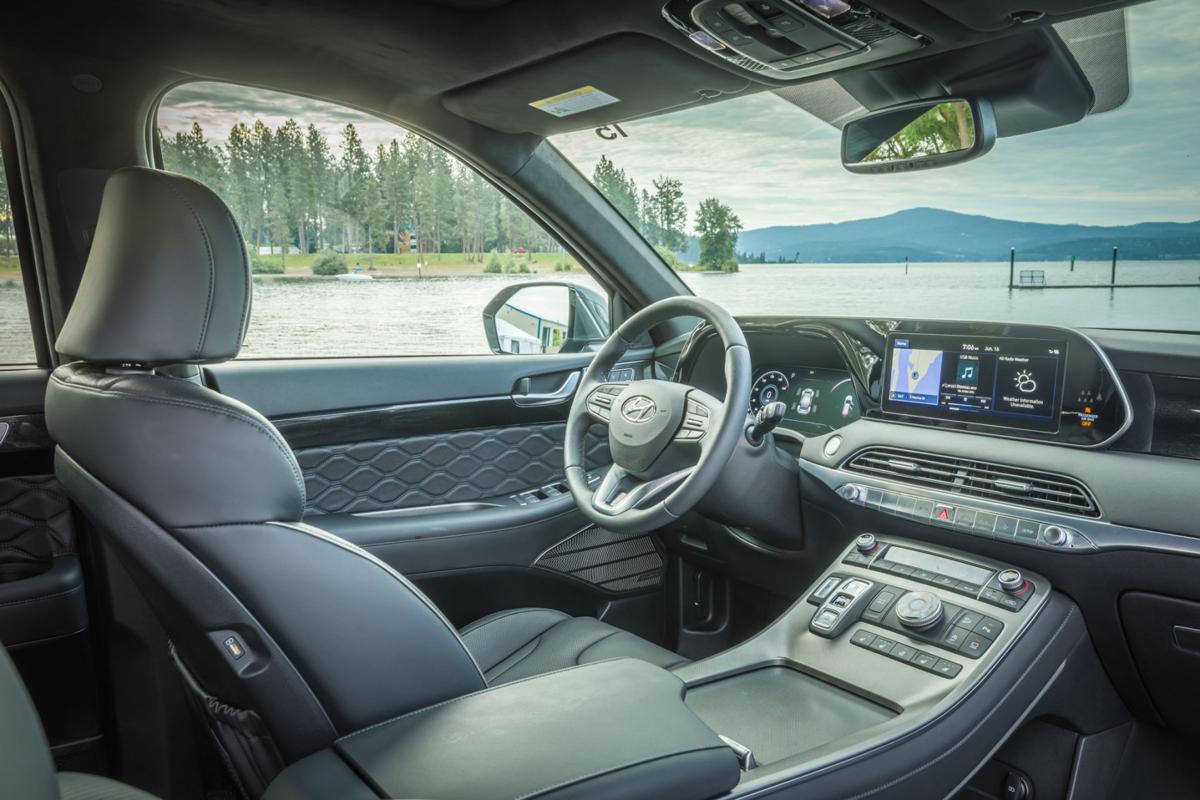 The Palisade is Hyundai’s three-row SUV that rides high and offers spaciousness, luxury, and plenty of new features. Bruce Benedict/Hyundai/TNS 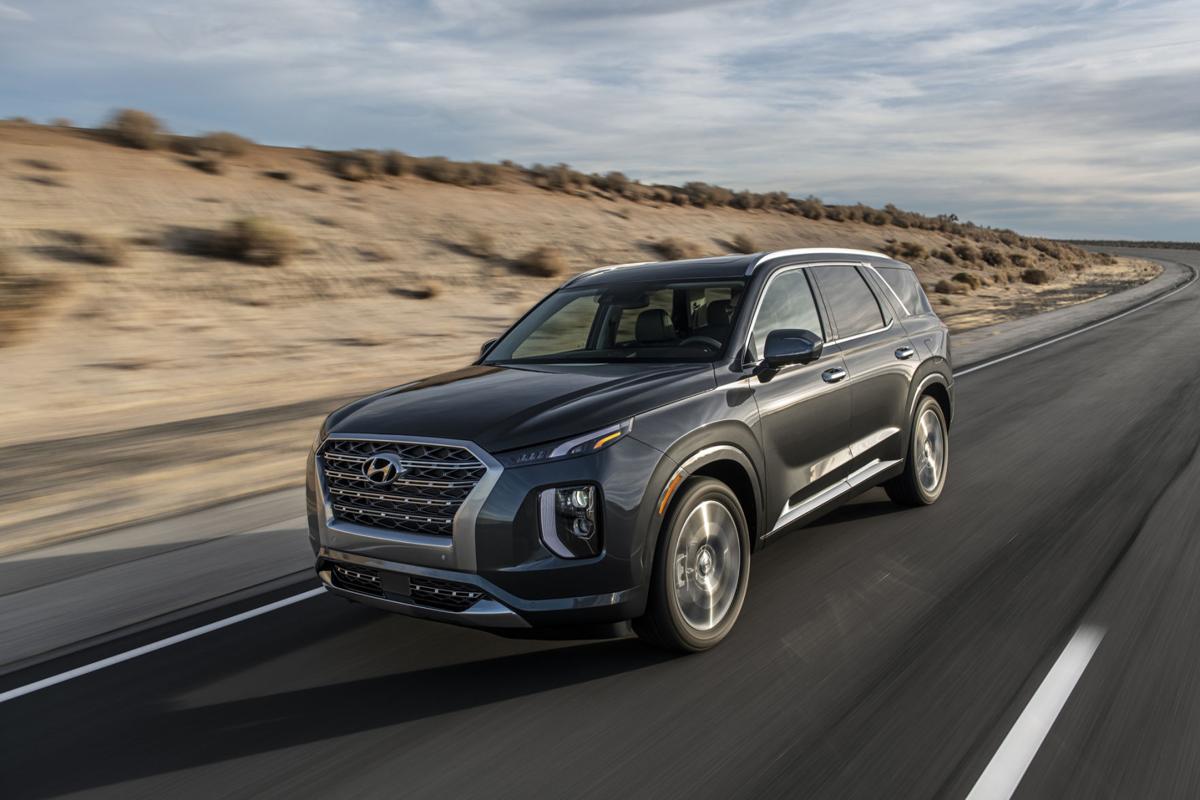 The Palisade is Hyundai’s three-row SUV that rides high and offers spaciousness and plenty of new features. Drew Phillips/Hyundai/TNS

The Palisade is Hyundai’s three-row SUV that rides high and offers spaciousness, luxury, and plenty of new features. Bruce Benedict/Hyundai/TNS

The Palisade is Hyundai’s three-row SUV that rides high and offers spaciousness and plenty of new features. Drew Phillips/Hyundai/TNS

Conventional wisdom: Car and Driver liked the “simple controls, proprietary features, a great value” but not the “wind noise, love it or hate it looks.”

Reality: A relative bargain for three rows of luxury, but only if fun is optional for you.

What’s new: The Palisade is Hyundai’s answer to the new Telluride. It’s a three-row SUV that rides high and offers spaciousness, luxury, and plenty of new features, and both were new for the 2020 model year, although they made their road debuts early in the cycle.

Unfortunately, the Palisade is missing much of the charm of the Kia cousin.

Up to speed: The straight-line acceleration should make any potential buyer quite happy. The 3.8-liter V-6 creates 291 horsepower and gets to 60 mph in 7.1 seconds, according to Motor Trend. And plenty of power is available for passing and other speed-enhancing maneuvers.

On the road: I’ve often remarked that Hyundai is the fluffier version of Kia, with softer handling but a smoother ride. But it’s been a few years since twin models were this obvious about it.

The Palisade’s handling is far inferior to the Telluride. When I hopped in the Telluride, I remember just thinking “Oooooh.” It glided over the twists and turns of my home territory with more ease than any three-row SUV had the right to, even before I made any adjustments.

The Palisade, on the other hand, lumbered through those same stretches, bouncing me around and sending me on a desperate quest for the Sport mode. But even that didn’t improve the handling noticeably.

In fact, with five drive-mode choices, a perfect blend should be available, but alas it is not. Handling remained adequate at best, and choppy at worst. The Palisade most reminded me of the old Expedition or Sorento.

Shifty: The 8-speed transmission worked pretty quietly under the hood, keeping the momentum. It’s operated through a Honda-style series of buttons.

Driver’s Seat: The Nappa leather seats included in the Limited trim are kind of firm, and also slippery; when I set the bolster full on to try getting myself comfortable, I could feel myself shifting from corner to corner. But overall the seats were not too bad.

The view of the dashboard was clear, although the steering wheel doesn’t telescope as much as I might have liked.

High tech: Among the gizmos are cameras on both sides that show the view of the nearby lane when the turn signal is switched on. The left side of the instrument panel displays the view to the left and to the right. Nice idea; a little hard to see. Turning one’s head and looking is still the best solution, but this is a nice additional feature.

Friends and stuff: It’s worth noting that the Lovely Mrs. Passenger Seat was not bothered by a hard seat. But, having endured childbirth times four and years of whining times five, she’s way hardier than her spouse.

The giant Sturgis Kid 4.0 enjoyed stretching out in the second row of the Palisade, which featured captain’s chairs. But when I suggested we stuff all seven family members for a five-block trip to Sturgis Fiance 1.0’s birthday dinner, he quickly demurred.

The third-row seat is snug, with little knee room because it sits so close to the floor. But overall, it’s not bad for what it is, unless you try cramming three adults back there. Uh-uh.

Cargo space is 85.4 cubic feet with two rows folded; 45.8 with one down; and 18 behind the third row, all fairly healthy, but still little more than half a Sienna.

Play some tunes: The Harmon Kardan premium audio operated pretty easily. Dials control volume and tuning, while a row of buttons gets around main functions.

Keeping warm and cool: The heater controls are mixed into a panel with the traction control, and it all becomes a little overwhelming. Dials control the temperature settings and buttons control the other functions.

Fuel economy: I averaged around 20 mpg in the usual range of Philadelphia region testing, pre-COVID-19. Feed the Palisade whatever.

How it’s built: Consumer Reports predicts its reliability to be a four out of five.

In the end: There’s a lot to like about the Palisade, but I’d definitely take the Telluride instead.