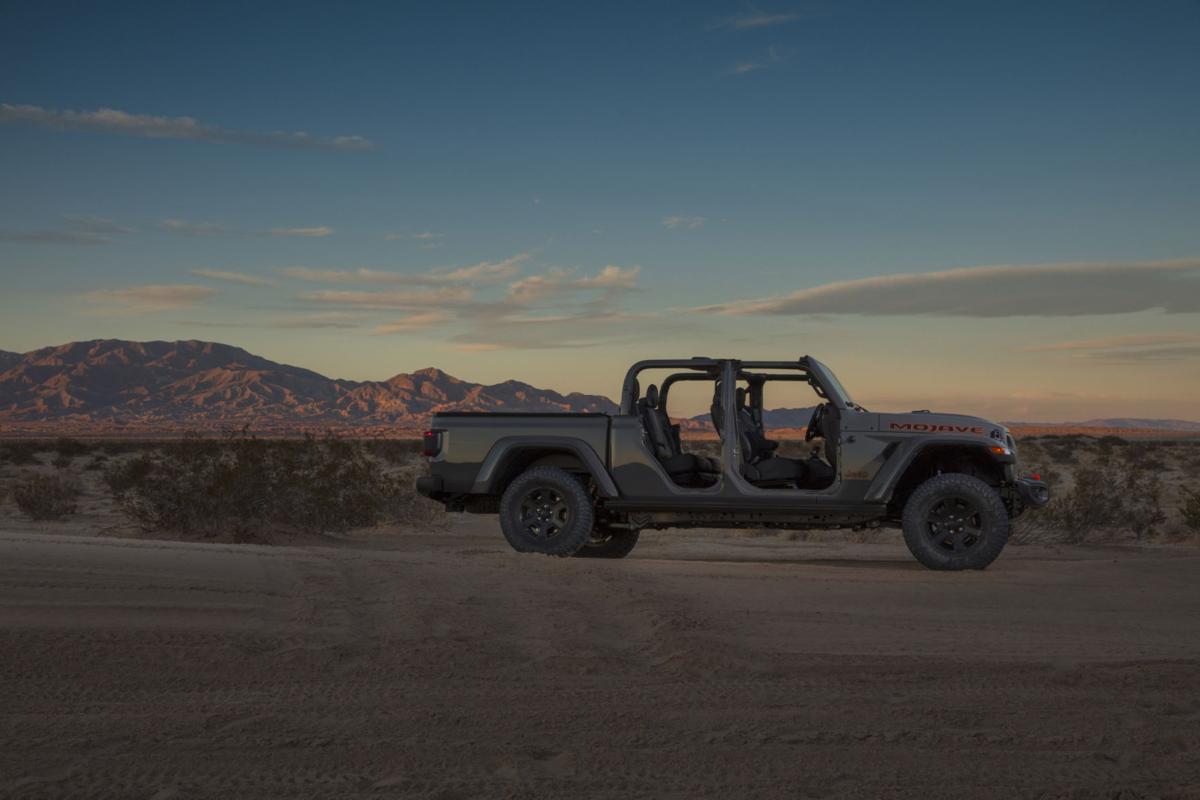 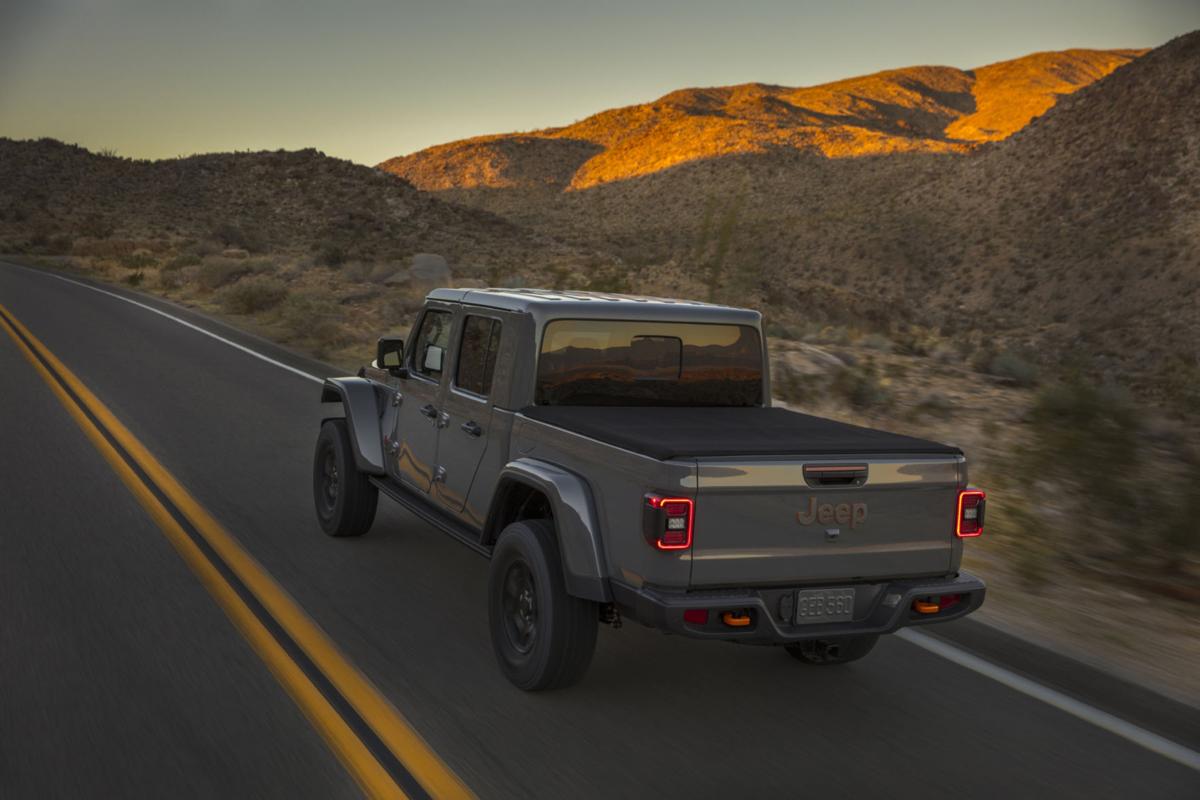 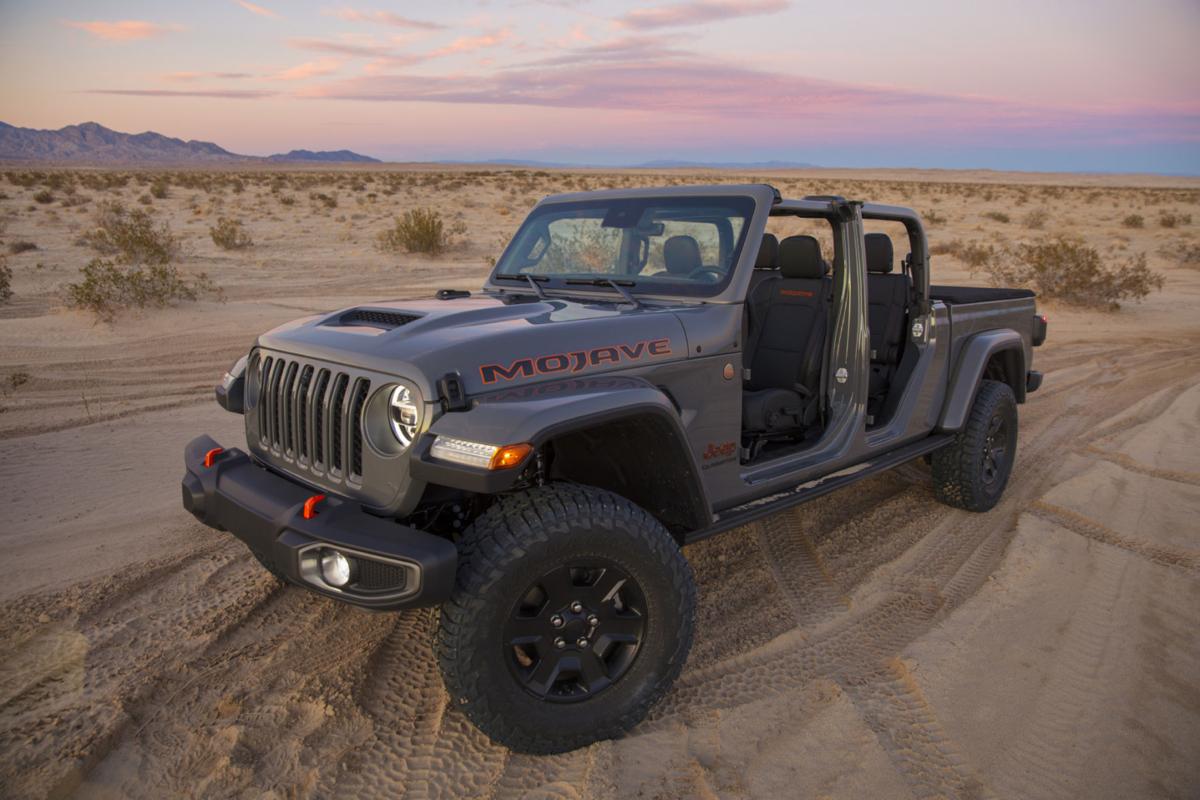 A tall step into the cab is the price you pay for the height and suspension travel that allow racing through the desert. FCA US LLC 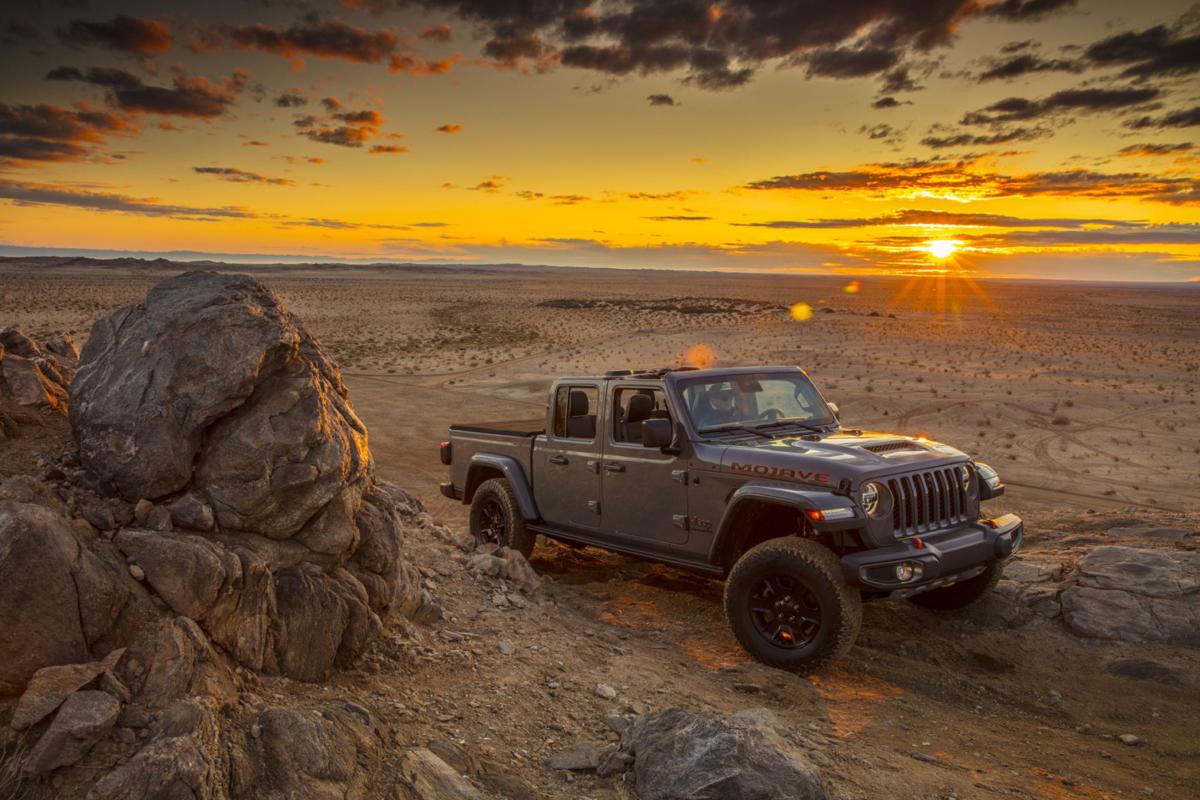 A tall step into the cab is the price you pay for the height and suspension travel that allow racing through the desert. FCA US LLC

Coming soon: The neighbor with endless stories about why their “desert-rated” truck is the cat’s pajamas not just for the legendary Baja 1000 race but for daily drives on Woodward Avenue, the Long Island Expressway and Lakeshore Drive.

Fiat Chrysler, which does special editions and limited-run models as well as anybody in the auto industry, has done it again, creating a model with unique looks and performance benefits that should rub off on the rest of the model line.

Gladiator Mojaves, which feature shocks and other running gear tuned for flying over sand dunes — but are surprisingly smooth and comfortable in daily use — will roll into dealerships when the Toledo, Ohio, plant that builds them resumes production after shutting down for COVID-19.

“Jeep and Fiat Chrysler are really good at special editions in line with the vehicle’s purpose and the brand’s DNA,” IHS Markit analyst Stephanie Brinley said. “The Mojave is credible and competitive, with a level of detail that shows Jeep thought the vehicle through.”

Prices start at $43,875, high for a midsize pickup, but reasonable for a specialty model at the top of the Gladiator lineup, alongside the “trail-rated” Gladiator Rubicon.

Is it a Raptor beater?

Ford created the idea, if not the term, of desert rating for vehicles meant to go fast off road with its F-150 Raptor.

The Gladiator Mojave isn’t exactly a competitor for the Raptor, though. The Raptor is longer, wider, heavier, more powerful and expensive. Prices start at $53,455. The Raptor’s also probably faster, though the Gladiator Mojave’s ride comfort will be tough to beat, and its smaller size promises maneuverability that will be welcome on the trail and in neighborhood parking lots.

The next all-new vehicle likely to test demand for desert-rated vehicles, or whatever name Ford chooses to use, will likely be a top model of the upcoming Bronco midsize SUV.

What’s the difference between “trail-rated” in Jeep speak — and desert-rated? Speed and terrain.

Speed is not your friend when picking your way over boulders, around hairpin bends and between trees on the legendary Rubicon trail. Speed’s an ally if you want to clear the top of a sand dune or slalom through the Empty Quarter in the Arabian Peninsula, where the sand can be as fine as sifted flour.

That’s the Mojave’s sweet spot. The truck has a revised four-wheel-drive system that allows for some wheelspin in sand and allows you to hit 50 mph in the lowest range of gears. A Rubicon, tuned to pick its way carefully over shifting rocks, slows the wheels to avoid spin, and tops out at 30 mph in its low range, or crawl ratio.

An “off-road plus” setting available only in four-wheel drive activates the system’s ability to sense when some wheelspin is desirable and when the driver’s likely to want max traction.

The suspension, particularly shocks, is different, too. Rock-crawling requires the ability to protect the frame, transmission and driveline from impacts at low speed. Sand racing, which almost nobody does but everybody thinks looks super cool, depends on absorbing high-speed impacts, like when the truck lands after going airborne or is going fast when it reaches level ground at the bottom of a dune.

To my surprise, that capability also made the Mojave smoother and more comfortable over potholes and rough roads. In a week of driving fast on winter-ravaged roads, I found the Mojave to be a very pleasant daily driver.

“There will be people who buy the Mojave for its looks, but really appreciate the smoother ride,” Jeep North America boss Jim Morrison told me.

“Jeep is well known for going slow over rocks with trail-rated vehicles. The Mojave is the same for going fast in the desert.”

I tested a well-equipped soft-top Gladiator Mojave that stickered at $59,450. All prices exclude destination charges.

Wind noise from the soft top is quite noticeable at highway speed, but people had no trouble understanding me on hands-free phone calls.

The Gladiator’s interior is roomy and accommodating. Headroom is plentiful, the front seat has plenty of storage space — but not a good place for smartphones in the center console.

The Mojave’s 11.6 inches of ground clearance is 1.6 inches more than a base Gladiator and half an inch higher than a Rubicon.

Climbing into the cab will be challenging for kids and shorter adults, despite well-placed grab handles inside each door. Running boards would defeat the purpose of increased ride height, though. A tall step into the cab is the price you pay for the height and suspension travel that allow racing through the desert.

Power seats are not available, a concession to the rough conditions and driving the Gladiator will face, but hardly a selling point in a model costing $60k out the door.