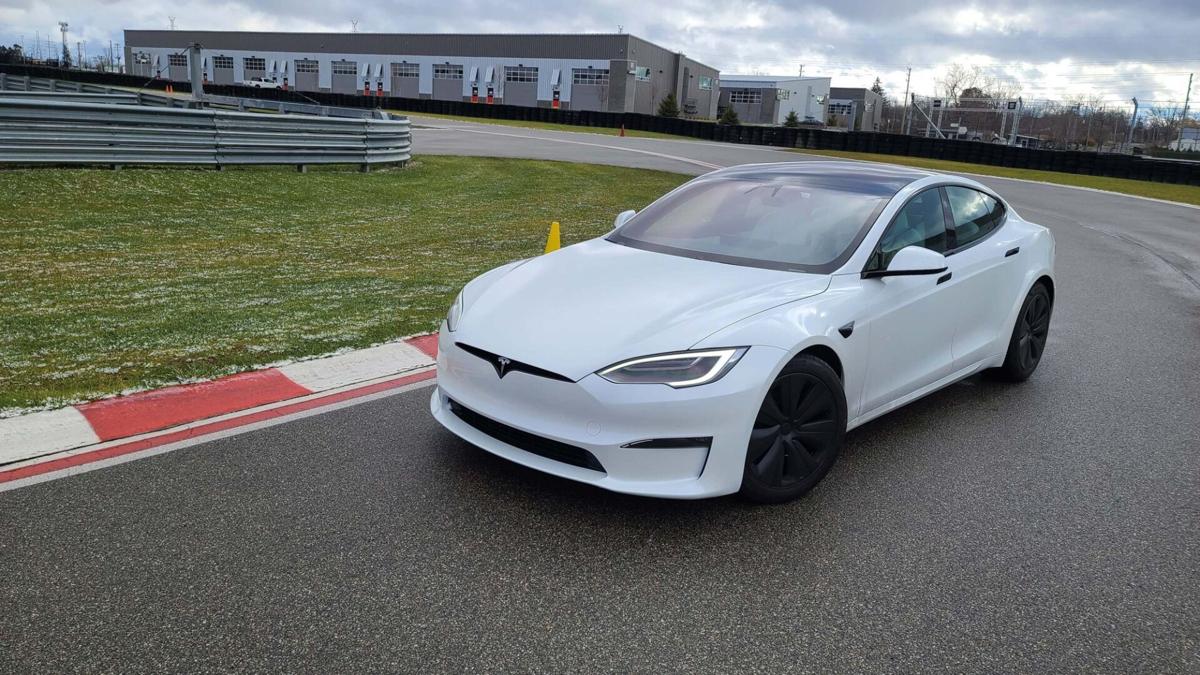 The 2022 Tesla Model S Plaid can hit 60 mph in less than 2 seconds -- a first for a production sedan. (Henry Payne/The Detroit News/TNS) 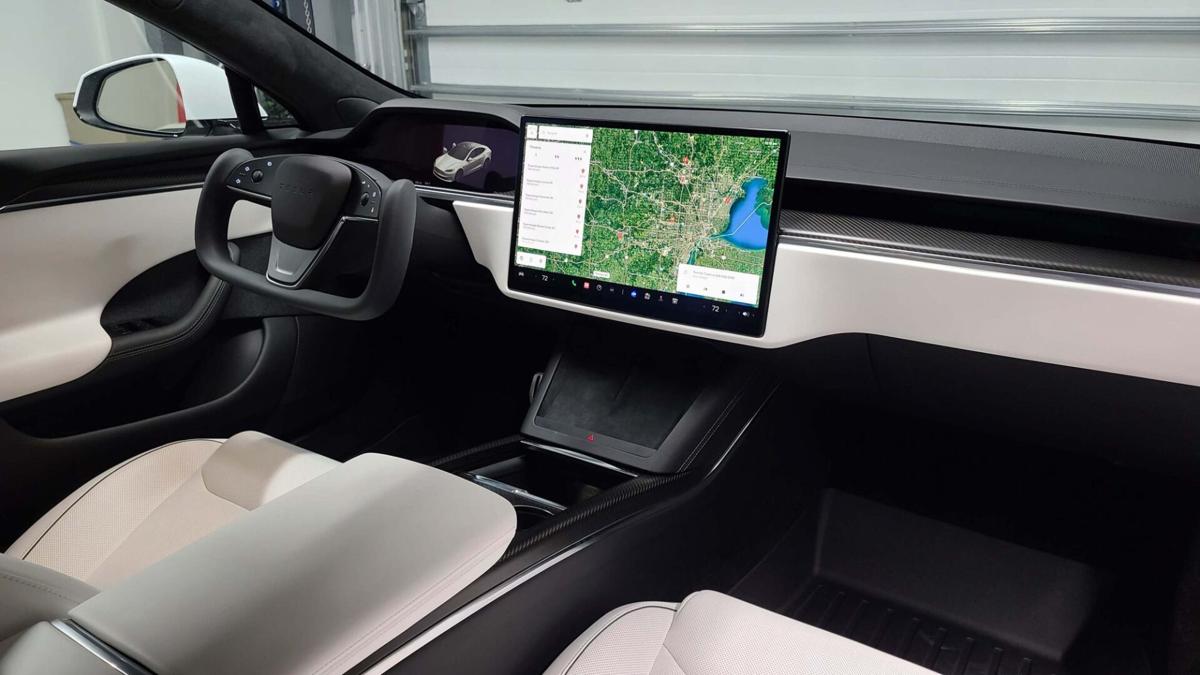 The simplified interior of the 2022 Tesla Model S Plaid takes its cues from the Model 3. Henry Payne/The Detroit News/TNS 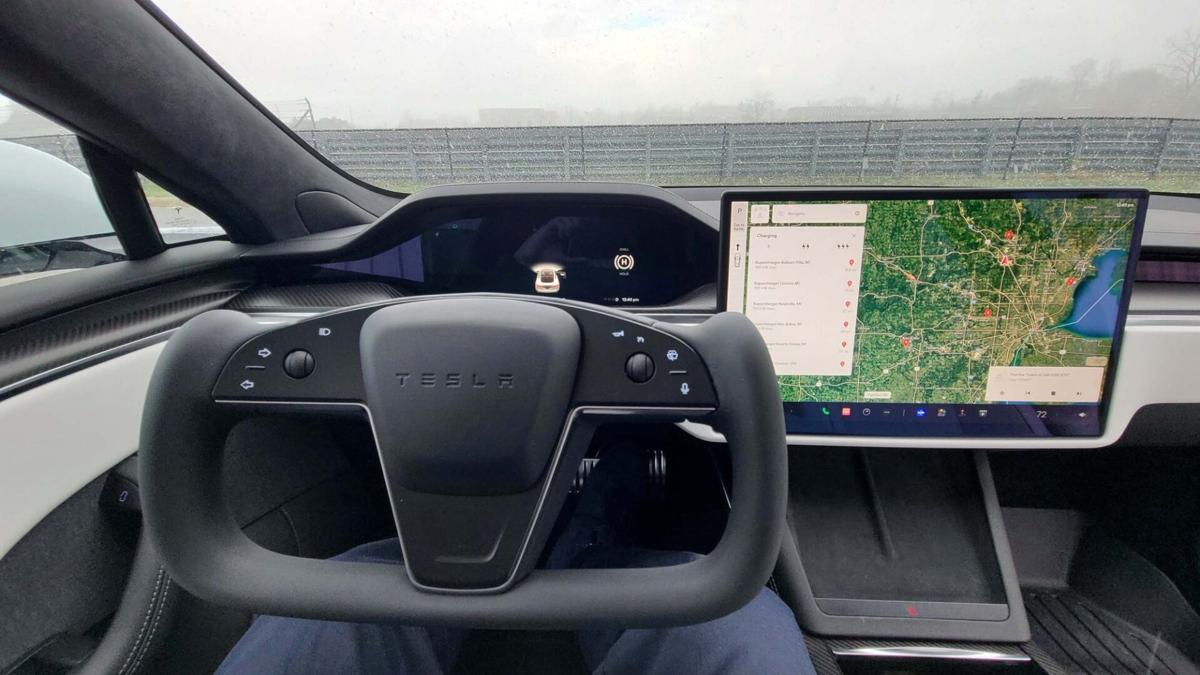 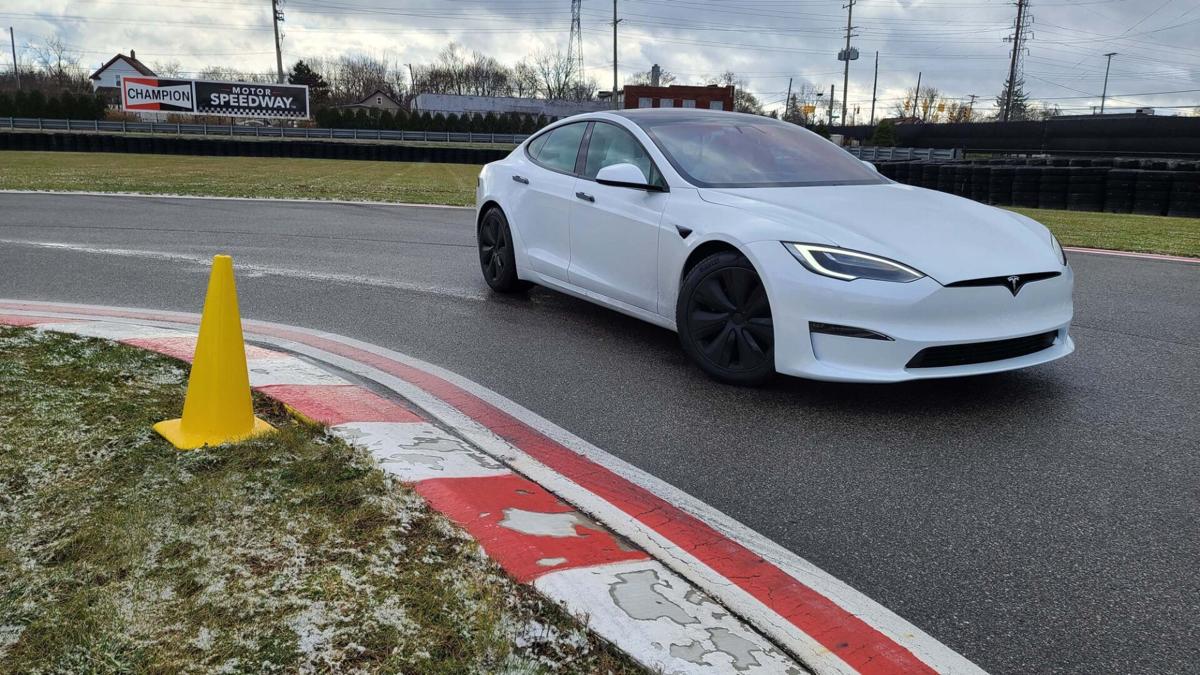 The 2022 Tesla Model S Plaid can hit 60 mph in less than 2 seconds -- a first for a production sedan. (Henry Payne/The Detroit News/TNS)

The simplified interior of the 2022 Tesla Model S Plaid takes its cues from the Model 3. Henry Payne/The Detroit News/TNS

PONTIAC — When Spaceballs One hits Plaid speed in Mel Brooks’ classic “Star Wars” spoof, the space ship shakes like a tin can, the engines scream, the crew cowers, and the evil Dark Helmet (played by the incomparable Rick Moranis in a send-up of Darth Vader) yells: “What have I done? My brains are going into my feet!”

The 2022 Tesla Model S Plaid isn’t quite so harrowing. Though I think my brains did bounce off the back of my skull.

But I did manage a series of 2 1/2 -second, launch-controlled, 0-60 runs that were a serenely violent experience.

Set Launch Control by matting the brake and accelerator pedals with (respectively) your left and right feet. Release the brake. Holy Mother of Mercy.

The Model S Plaid briefly recoiled as if it been hit by a bolt of lightning. The instrument display lit up with Spaceballs-like orange Plaid graphics. Then the Tesla exploded forward, the tri-motors’ instant, 1,050 pound-feet-of-electric-torque silently crushing my spine into the seatback. According to the data crunchers at Motor Trend, Plaid generates 1.00 g-load at launch, peaking at 1.23-g at 32 mph.

Sixty mph blew by in a snap, but Plaid didn’t stop there, hitting 120 mph in about seven seconds — or about the time it takes a Nissan Leaf EV to hit 60.

“Just stop this thing! I order you! Stooooop!” yells Spaceballs’ Dark Helmet as he holds on for dear life.

But as the end of M1’s back straight rushed up, I simply hit the Plaid’s big brakes and the sedan rotated beautifully into the long, 150-degree Turn 7 sweeper. Another data point? Plaid not only shattered Motor Trend’s acceleration records, it went from 0-to-100-and-back-to-0 again in 8.2 seconds, beating the McLaren Senna supercar by 0.3 seconds.

Tesla CEO Elon Musk is obviously a Spaceballs fan and Plaid has always been the goal of the Tesla’s flagship Model S. But Model S’s performance long ago reset expectations for EVs.

I tested Ludicrous six years ago and it made me light-headed, so instant was the torque. It was a Cedar Point roller-coaster ride, and you could do it over and over and over. Zero-60? 2.8 seconds. Now comes Plaid — nearly 30% quicker.

But Tesla has always been about much more than straight-line speed. Musk and his elves are about rethinking the automobile (no coincidence Model S badging echoes the revolutionary Ford Model T of a century ago). And legacy automakers are paying attention.

Desperate to catch the American car company that has been eating their lunch the last decade (something Detroit premium makers struggled to do), German makers have brought out the big guns with EVs like the Porsche Taycan, Mercedes EQS and Audi e-tron GT.

Your move, Tesla. If Model S’s exterior plays it safe (subtle changes include front/rear face tucks and rear Plaid badge), the interior does anything but. Where brand halos usually set the lineup’s tone, Model S takes its design cues from its popular Model 3 junior sibling.

The signature 17-inch center screen has been flipped to landscape mode against a simple horizontal dash (secluded air vents and all) like the Model 3 I’ve owned for three years. Unlike 3, S still features an instrument display, now more subtly integrated into the dash.

What’s really daring in the 2022 Model S is the yoke steering wheel.

Obsessive about pushing the envelope, Tesla has adopted a wheel more common to game consoles and Formula One Racing. Dude, round is sooo 15 minutes ago.

The design improves instrument-display visibility (see that Plaid light show) and is easy to use on track. But it takes getting used-to around parking lots and other tight turns typically negotiated by rotating the wheel hand-over-hand. I found myself learning one-handed driving in tight situations like a baton twirler. If Tesla introduced one-pedal regenerative driving, why not one-hand steering?

The Model 3’s clever, multi-functional scroll orbs are now the heart of the Model S yoke. But Musk & Co. continue to push boundaries by striking the shift and turn signal stalks. Shifting between park, drive and reverse is now done by a screen slider, turn signals by wheel-based buttons. The latter can be maddening.

Cruising along I-75, I actuated Navigate on Autopilot with a simple press of the scroll orb — then automatically changed lanes with the turn-signal button.

At the limits, no one can compete with the Porsche Taycan for handling talent, but Plaid makes a good effort with its state-of-the-art adaptive suspension. In COMFORT mode, I floated above Detroit’s pocked streets. In PLAID mode, the Model S crouched low — hugging M1 Concourse’s turns despite wintry conditions.

Overcooking it into Turn 9, I caught the Plaid’s rear end easily, the car’s electronics helping herd its 4,677-pound girth back into line.

The first significant makeover of the Model S in a decade, Plaid once more raises the bar for luxury performance. With its unmatched Supercharger network, shocking speed, predictable handling and leading-edge tech, it’s the most ambitious sedan in the world. No doubt, its price is only attainable to a few. But at $134,490, it is not only $50,000 cheaper than the comparable Porsche Taycan or Merc EQS, it’s $5K less than the P90D I drove in 2015.

Tesla has gone Plaid, and the competition is still catching up.