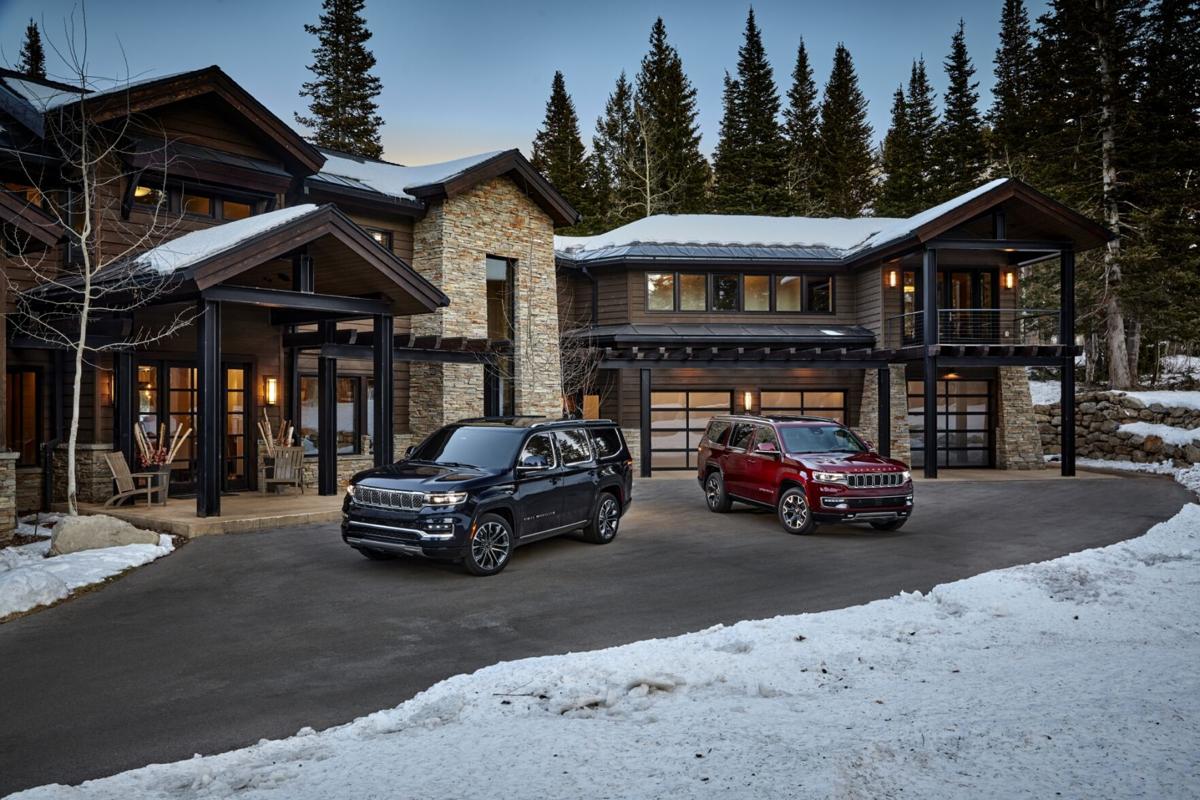 The interior of the 2022 Jeep Grand Wagoneer features premium materials accentuated by the use of customizable ambient lighting and other technology-rich appointments. Jeep

The interior of the 2022 Jeep Grand Wagoneer features premium materials accentuated by the use of customizable ambient lighting and other technology-rich appointments. Jeep

Jeep is jumping into the super-sized SUV space with a pair of old friends: the Wagoneer and Grand Wagoneer.

The three-row utes resuscitate the luxurious Wagoneer badge that adorned opulent, wood-trimmed ocean liners for the last four decades of the 20th century. The Jeeps complete the brand’s expansion as a full-line SUV maker by offering models in the industry’s biggest, most luxurious segment.

Built on a Ram truck-like ladder frame chassis, the Wagoneer will take on segment heavyweights like the Chevy Tahoe/Suburban and Ford Expedition, while the more opulent Grand Wagoneer will train its guns on land yachts like the Cadillac Escalade, Lincoln Navigator, and BMW X7.

Sitting atop a Jeep SUV lineup that now includes the Wrangler, Renegade, Compass, Cherokee and Grand Cherokee, the standard Wagoneer is 10 inches longer and six inches taller than the mid-size Grand Cherokee. Prices will start at $57,995 with a fully loaded Grand Wagoneer topping out over $100,000. It’s the second Jeep to eclipse the six-figure mark after the performance-focused Grand Cherokee Trackhawk.

“Wagoneer and Grand Wagoneer are born from the Jeep brand, but they have a flair of their own, building on a rich heritage of craftsmanship and refinement, while offering new levels of sophistication, comfort and legendary 4x4 capability, as well as a new level of customer service,” said Jeep brand chief Christian Meunier.

The Wagoneers boast Jeep’s signature square wheel arches and seven-slot grille, though the latter is notably thin at a time when even BMW has given in to a full-fascia kidney grille. You’ll know the Grand Wagoneer by its two-tone black roof, retractable side steps, fender flares, and a sculpted grille that Jeep describes as “laser-etched grille rings, similar to a knurled finish seen on fine watches.”

Don’t look for wood paneling like the Grands of old -- for this generation, all the Satin American Walnut will be on the inside. And it anchors palatial interior digs.

Sealed off from the outside world by acoustic-laminated windshield and front door glass, passengers can luxuriate in a 23-speaker, 1,375-watt, 3D surround McIntosh audio system.

This rolling living room is then outfitted with state-of-the-art tech. In a smartphone age where hi-def digital screens are a plus, Wagoneers will wow with available, dual, stacked 12-and-10 inch dash screens. The set-up will be familiar to Audi users with the tablet-like main screen dominating the landscape.

The Grand Wagoneer features a four-zone climate system controlled by the front 10.25-inch screen and a similar 10.25-inch screen in back. Eleven USB ports and a Wi-Fi hot spot that can handle eight devices to keep passengers connected.

So big is the dash that Grand Wagoneer customers can option a third, passenger-focused 10-inch touchscreen over the glovebox. An HDMI plug allows the screen to mirror a tablet or smartphone. Capable of showing content independent from one another, the screens aim to create a “cinematic experience.” Including available second-row touchscreens, the Grand totals 75 inches of interior screen space.

The touchscreens will be operated by Jeep’s latest Uconnect 5 user interface — five times quicker than the outgoing system. They will also be available with industry-first Amazon Fire TV access using Alexa so passengers can stream a variety of movies, TV shows and apps.

Other available toys include a 360-degree camera, night vision camera with pedestrian and animal detection, and a digital rear camera mirror first seen in Escalade.

“These huge SUVs went away in the Great Recession, but now they are back more opulent than ever,” said ISeeCars executive auto analyst Karl Brauer. “The level of luxury technology and materials is impressive. The Wagoneer doesn’t just compete against Cadillac and Lincoln; it goes after Mercedes and BMW.”

Wagoneers come in three trims — Series I, II, III — with the Grand offering a further Obsidian trim that wraps the SUV in a black tuxedo including 22-inch black wheels, grille, badging, exterior mirrors and doors.

Both beasts are powered by V-8 engines. Wagoneer comes standard with a 392-horsepower, 5.7-liter mill. It’s paired with a 48-volt battery (also found in the Ram 1500 pickup) that enables improved fuel economy. Grand Wagoneer sports a 471-horse, 6.2-liter stump-puller that Jeep says will hustle from 0-60 mph in just six seconds. Drivers operate an eight-speed transmission with a rotary console shifter.

Self-driving features like Caddy’s Super Cruise and Ford’s Active Drive Assist are all the rage, and Jeep’s land yacht will be offer its own hands-free drive assist on divided highways. Parking won’t require a tugboat as the Wagoneers offer self-park assist.

The big utes won’t (yet) be trail-rated like some of their smaller kin, but they will still benefit from up to 10-inches of ground clearance, air suspension and all-wheel drive with drive modes for Rock, Snow and Sand/Mud. The Wagoneer comes standard with four underbody skid plates. Additional capabilities include fording up to 24 inches of water and towing 10,000 pounds up north.

Jeep is a rare brand cross-shopped by mainstream and luxury buyers alike. Wagoneer dealers will be trained to roll out the red carpet for customers including 24/7 concierge support, roadside assistance, and vehicle service pickup/delivery.

Not seen since 1993, the Wagoneer badge returns to showrooms in the latter half of 2021. Open the front doors and the outer edge of the dash features an inscription — EST. 1963 — that pays homage to the first model year of the original Wagoneer.