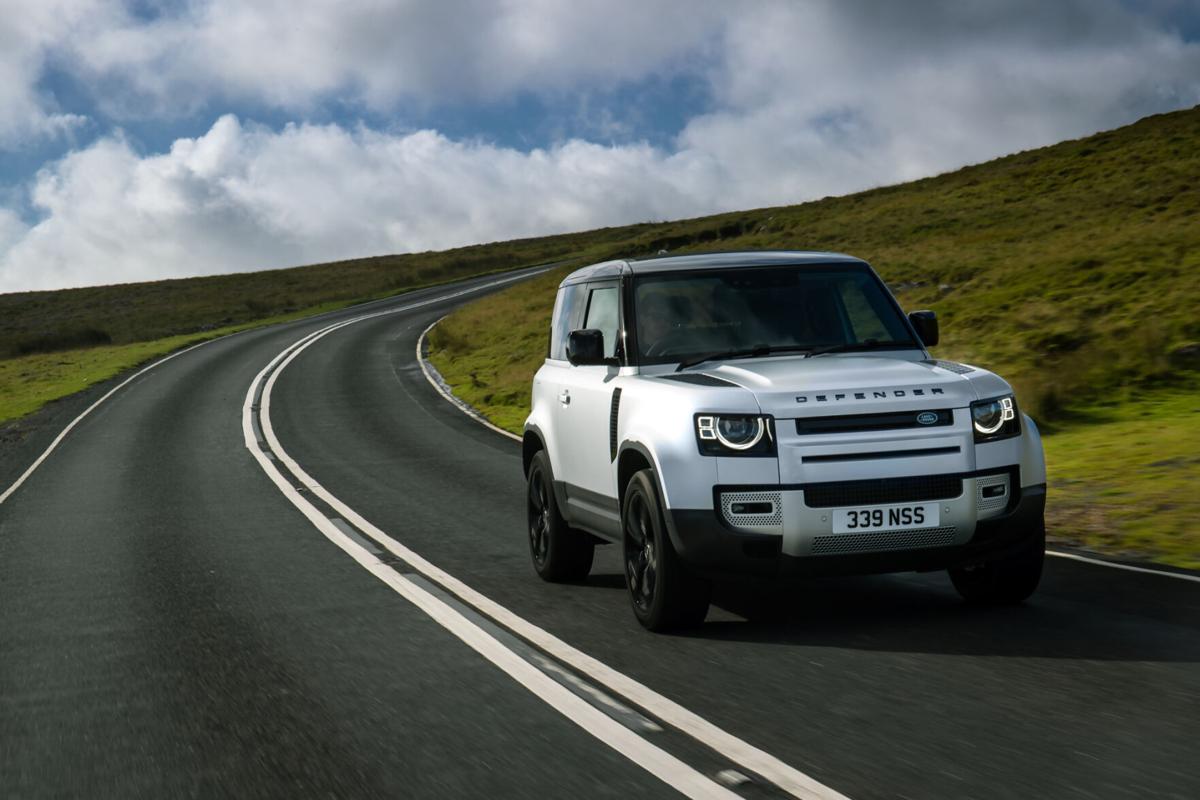 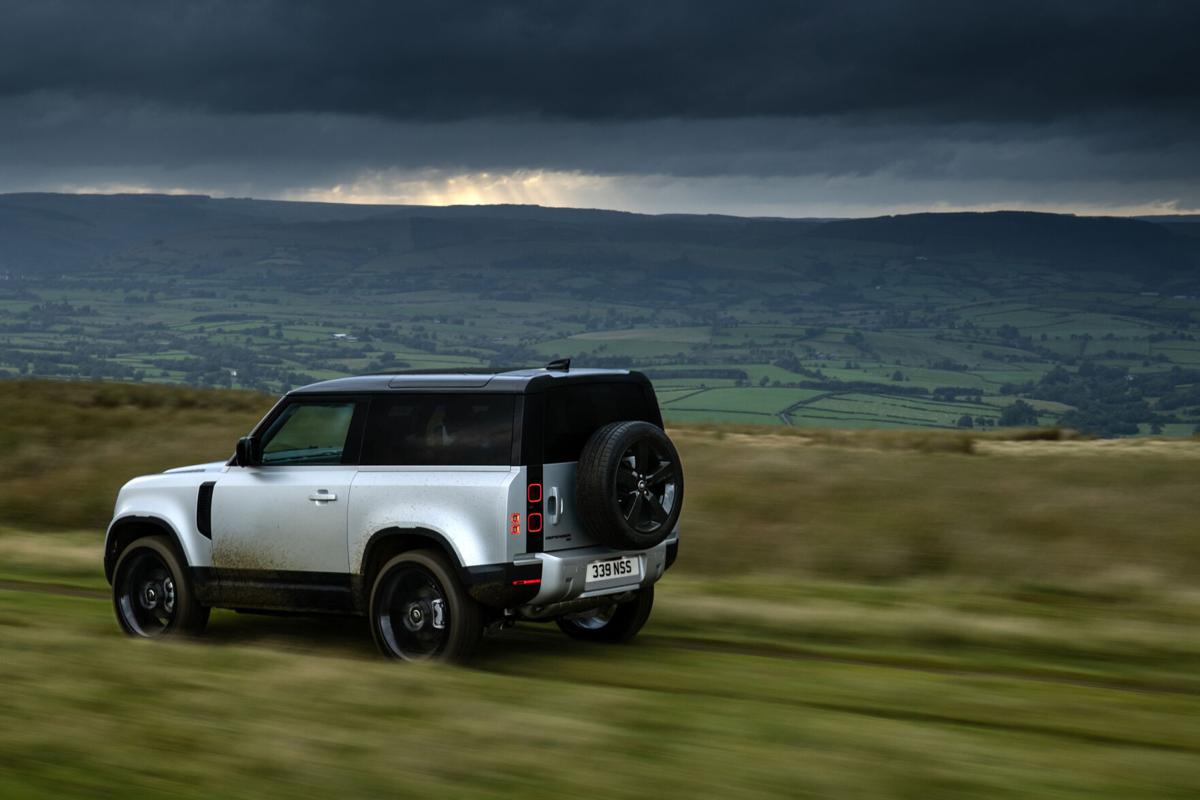 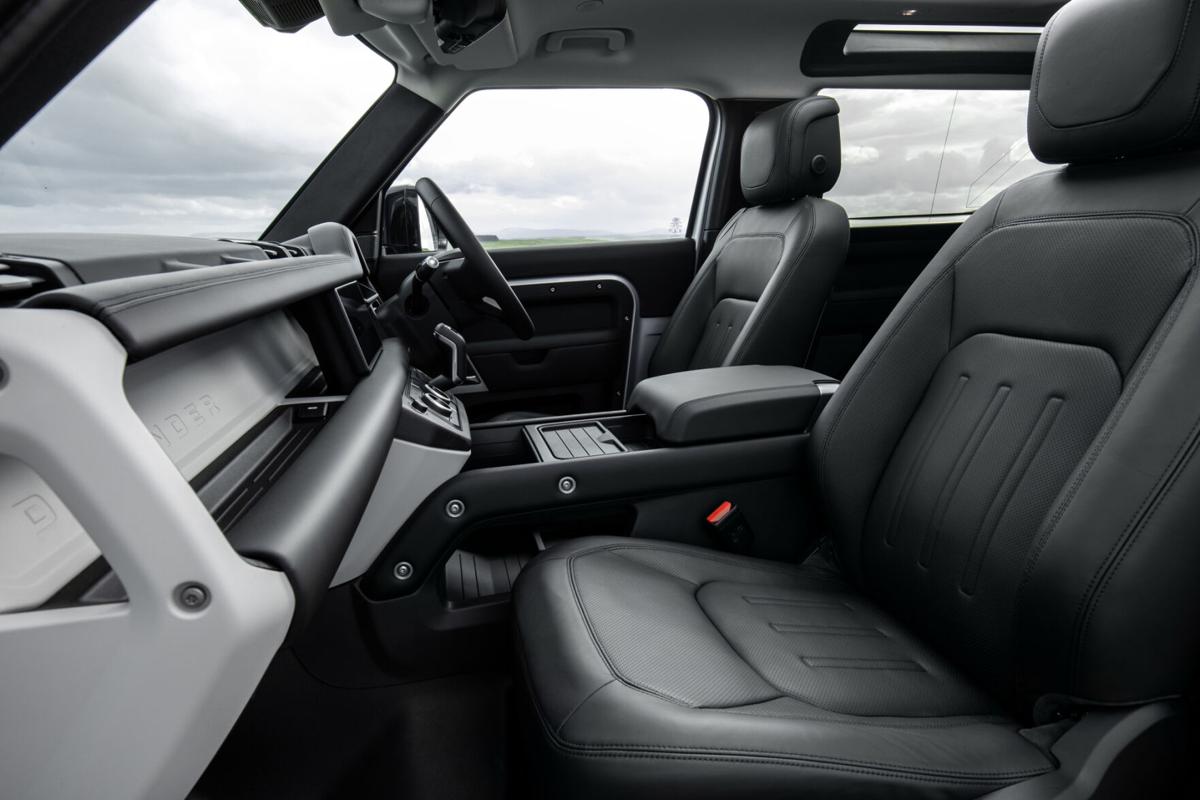 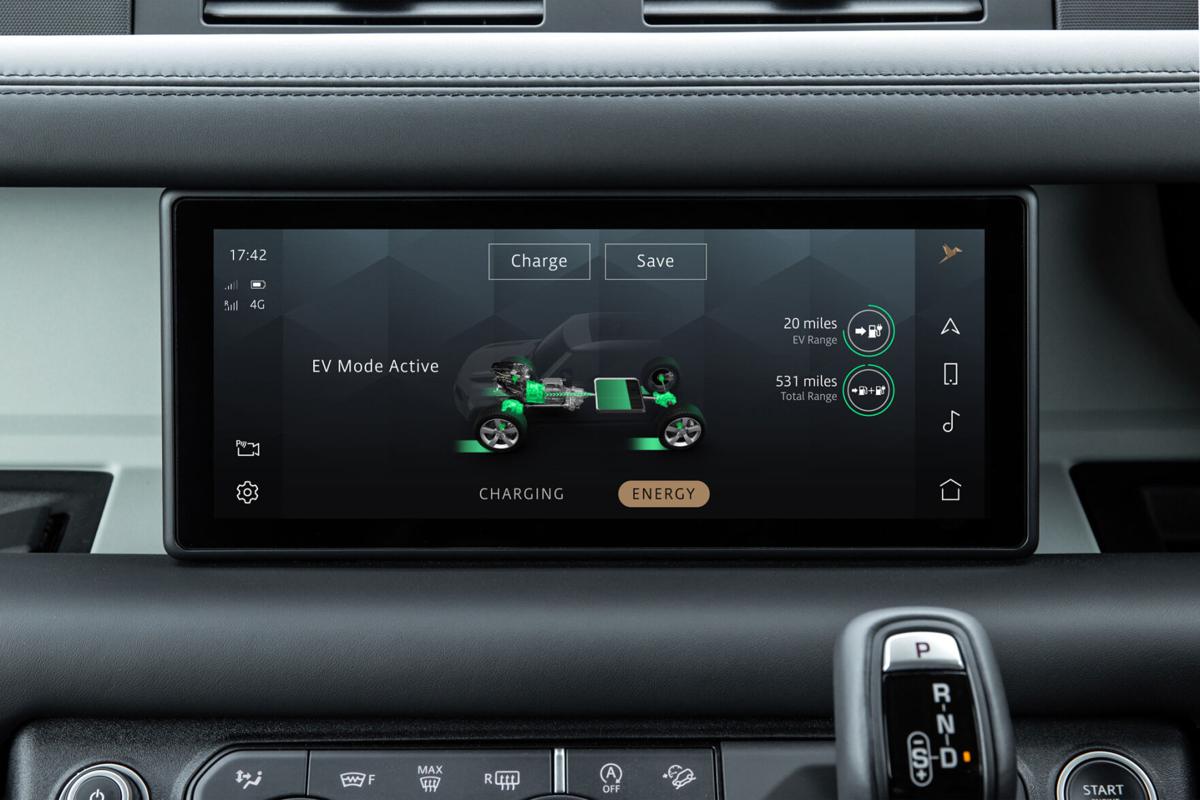 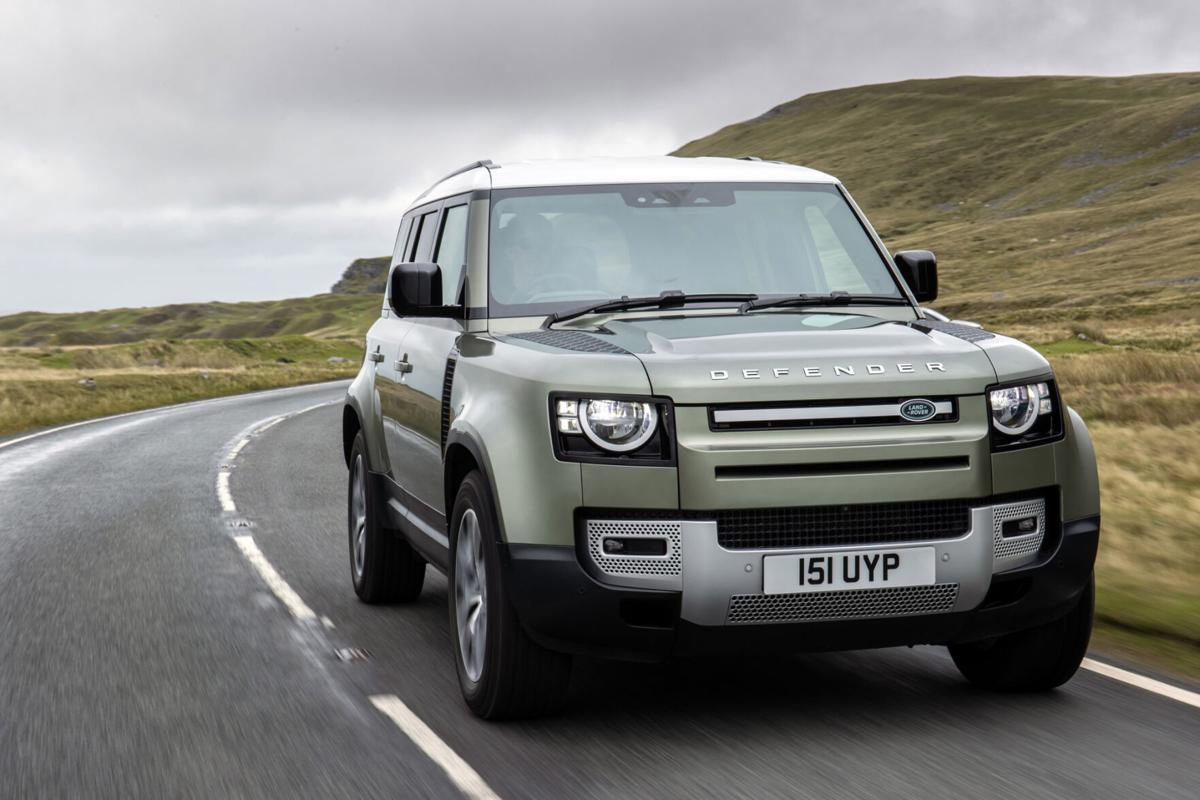 The Jeep light transport vehicle, General Dwight Eisenhower once said, was “one of three decisive weapons the U.S. had during World War II.”

Over 70 years later it inspires three of the most important SUVs in the U.S. auto market.

The Jeep Wrangler, Ford Bronco and today’s tester — the 2020 Land Rover Defender — all have their roots in the World War II Jeep. In an SUV-crazed market, their war-era history still resonates with customers. The Wrangler is the direct descendant of that Jeep. Ford also built Jeeps during the war, a legacy that ultimately inspired the Bronco.

And Land Rover? Its first model was built in 1948 on the Jeep warrior’s chassis.

Today, that vehicle has evolved into the Defender SUV. But while its sister Wrangler and Bronco are mainstream badges, the Defender is aimed at a higher demographic. It’s a Wrangler for the luxury class.

Like many Americans, I thought Land Rover was exotic even before I knew what it was. The “Series I” SUV (before marketing came to its senses and called it Defender) co-starred in the movie “Born Free” that I watched umpteen times as a kid. Rover’s occupants were beautiful people with English accents. Lions lounged on its roof. It drove across Kenyan grasslands. Cool.

The 2020 Land Rover Defender has standard 8.5 inches of ground clearance, shown here, that can be raised to 11.5 with air suspension.

By contrast, my first memories of Jeeps were windshieldless, machine-gun-toting Army vehicles. The Bronco? It won Baja 1000 races in the Mexican desert. Crazy, rugged stuff.

Turns out the modern variants pretty much follow the stereotypes. The Wrangler and Bronco can be stripped naked of their body panels for extreme off-roading. I’ve tested the Wrangler through off-road muck and rode shotgun as Bronco did the same. They feature articulated suspensions, so they can crawl over rocks at all kinds of weird angles. The Defender has none of these things. While plenty capable in the sticks, this is a more refined tree chewer.

So, naturally, I took it the grasslands of Kenya — er, northern Michigan.

Alas, I didn’t see any lions or Brits, but the Defender impressed with its off-road refinement. Start with the adjustable air suspension.

The 2020 Land Rover Defender has all the latest in electronic gizmos.

The Defender already comes with impressive 8.5-inch ride height. But as I encountered the long grass and uneven terrain, I wanted more. I toggled the suspension-lift button on the dash and Rover hiked its skirts to 11.5 inches. The transition took just seconds, upping the Defender’s specs to a class-competitive 38-degree approach angle, 28-degree breakover angle and 40-degree departure angle.

The Defender also comes with an encyclopedic range of drive modes including Grass and Sand, Mud Ruts, Sand and Ocean Bottom (kidding about that last one). I selected Grass and Sand and grunted happily along — splitting narrow tree lines, climbing grades, navigating rocks. The gnarly, off-road tires — Goodyear Wranglers — clawed the earth.

On a couple of occasions, deep ravines turned me back. If I want to go that rugged, I’ll slap 40-inch monster tires on a Jeep, thank you very much. The Defender is for more civilized outings.

At $72,180, my tester was dressed in classy jungle green over a body that can best be described as premium Lego.

Governments may demand electric cars by 2030 — but the 2020 Land Rover Defender needs lots of gas to get to the outback and back.

The vehicle’s traditional, boxy design (“A shape a child could draw,” says Land Rover design chief Gerry McGovern) has been cleverly updated to match its modern electronics. Like Lego blocks, the pieces fit in place. Snap in round LED headlights embedded in glass blocks next to a block grille. Snap on black plastic strips on the hood. A white roof. A body-colored C-pillar block that defines the side view.

You can’t miss it.

And not just because of its design. This is a big vehicle. Nearly 10 inches longer than the compact Wrangler, the mid-size Rover is six inches wider and four inches taller. This translates into five more inches of shoulder room inside — 78 cubic feet of cargo with the rear seats down.

Like its famous ancestors, Rover comes in two-door (90) and four-door (110) variants. Unlike Defenders of yore, the brute is built on a unibody which Rover engineers say eclipses the old ladder frame for strength. It felt plenty solid off-road, but the Defender was quite comfy on my drive up Interstate 75. Made to shed its doors, the Wrangler is noisier than Defender, which could pass for a normal SUV. It’s an off-road wolf in sheep’s clothing.

This being luxury class, the Defender inline-6 is supercharged and turbocharged for gobs more power than Wrangler’s six. The result is 395 horses trampling the grasslands (a 296-horse turbo-4 is also available).

Echoing the exterior, the interior is Lego simple.

The interior style — Rover calls it “constructivist modular” — is punctuated with faux screws, as if the body panels were screwed in by 10-year-olds. The polyurethane steering wheel spokes are snapped in place. The dash is a wide trough interrupted by a simple tablet screen.

The center console offers lots of room, including subterranean storage. It’s particularly purse-friendly. I have a weakness for popcorn, and a popcorn box fits nicely. Land Rover figures you’ll spend hours in this car, and the passenger-friendly touches continue in back with a row of USB and charging ports.

The rear of the 2020 Land Rover Defender is as distinctive as the front with its vertical taillights and spare tire.

The vehicle’s screens are rich in capability. Land Rover has struggled to keep up on electronics, so I used available Android Auto app for directions. But vehicle-specific information is excellent.

Assuming owners want to get their $72,000 SUV really dirty, drivers can wade through up to 35 inches of water. Dirty passengers needn’t worry — the seats are made from tough, washable fabric.

I threw lots of luggage in the back, the door-like hatch swinging open left to right. This being a Brit, it’s oriented toward left-hand drive English roads. There’s loads more room on top, with roof rails that can take 660 pounds of stuff. You know, for any lions that want to lounge up there when you’re in Kenya.

The 2020 Land Rover Defender comes in 90 (two-door) and 110 (four-door) trims. All vehicles are four-wheel-drive with the ability to wade into 35-plus inches of water.