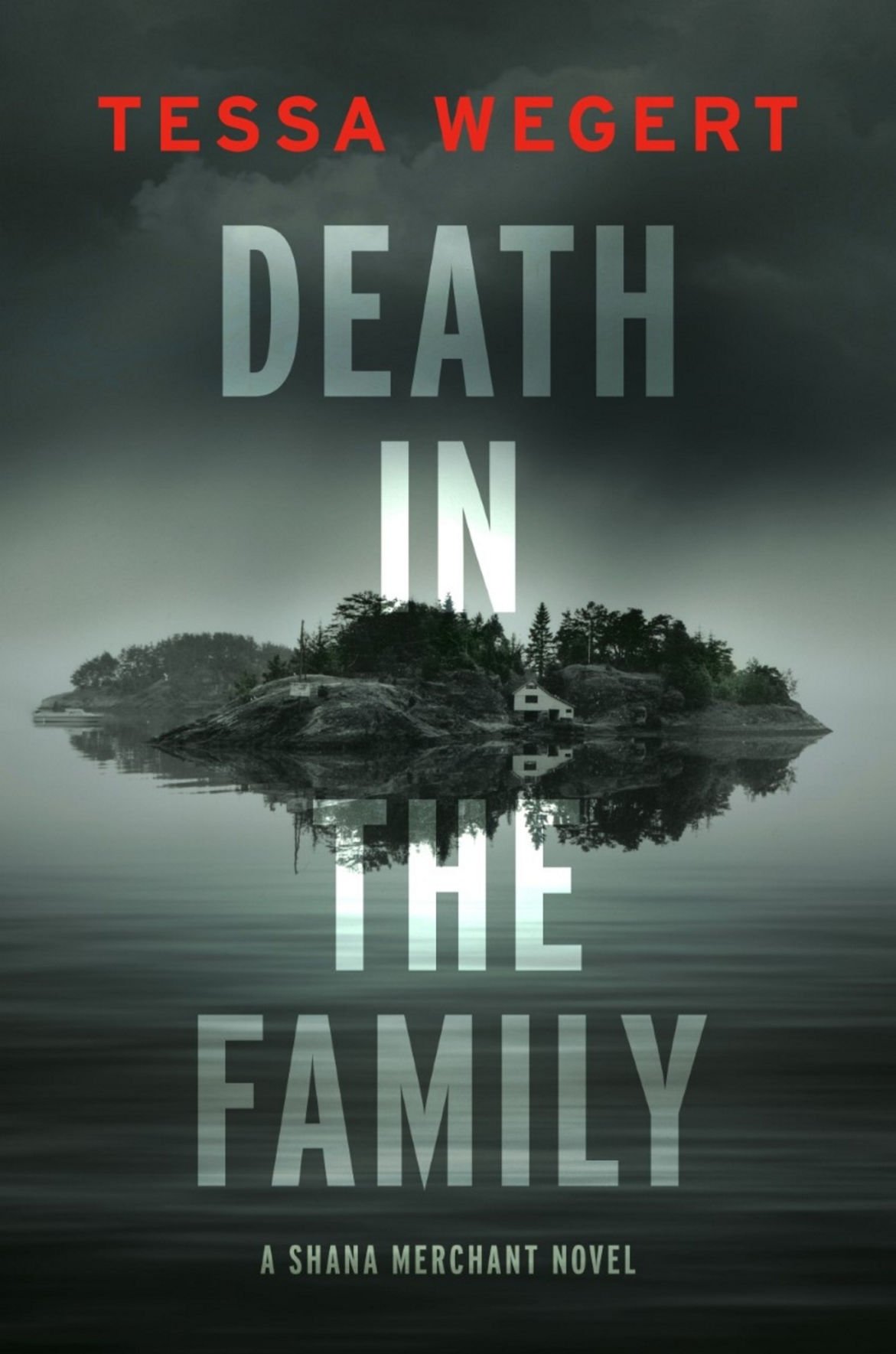 The sequel to “Death in the Family” has been fast-tracked for release in December. Berkley Prime Crime 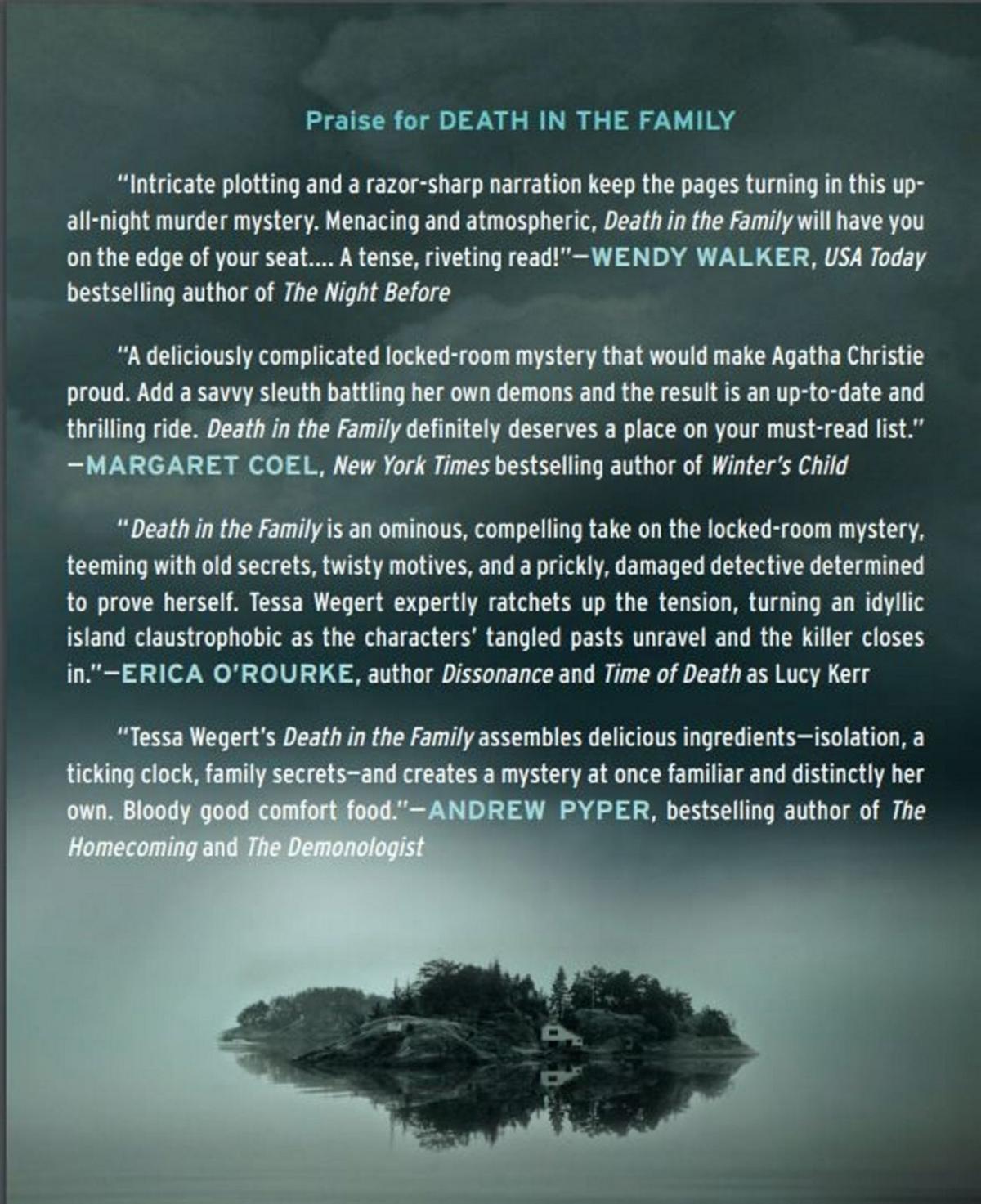 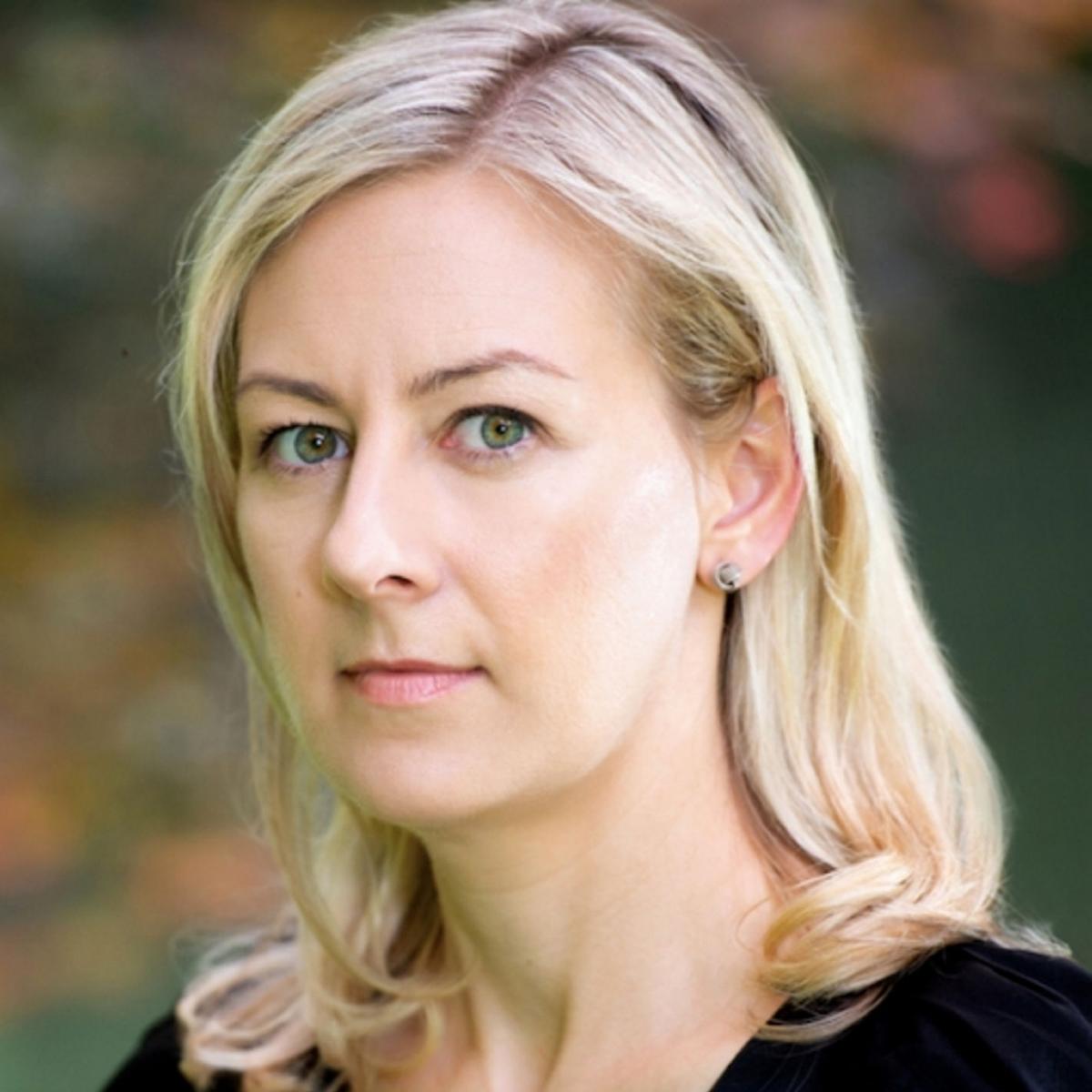 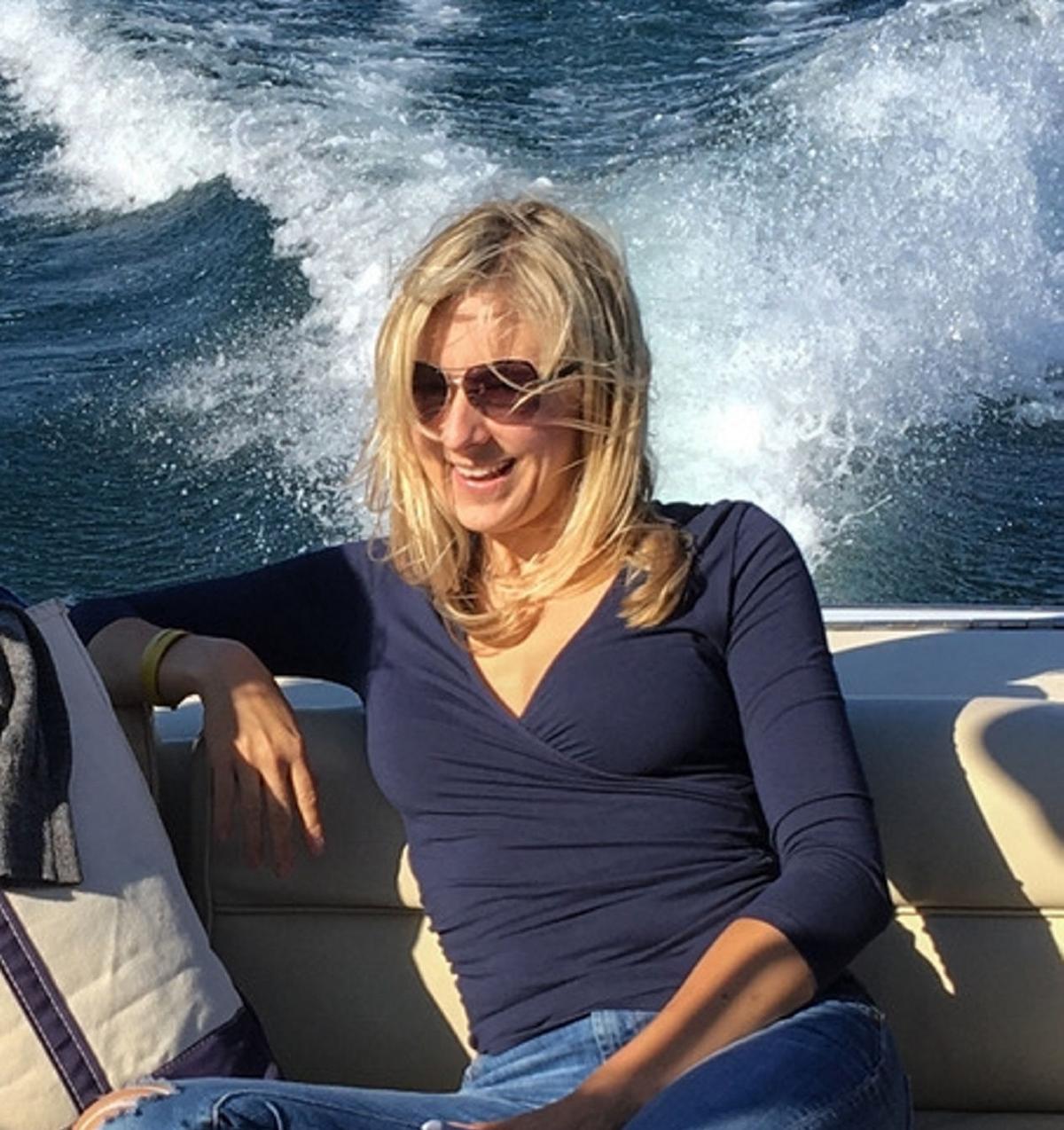 Novelist Tessa Wegert, here relaxing on the St. Lawrence River, wondered, “What would happen if there was a crime on an island. How would that play out?” Submitted photo

The sequel to “Death in the Family” has been fast-tracked for release in December. Berkley Prime Crime

Novelist Tessa Wegert, here relaxing on the St. Lawrence River, wondered, “What would happen if there was a crime on an island. How would that play out?” Submitted photo

A locked-room mystery set in the Thousand Islands and reminiscent of the works authored by Agatha Christie has been so well received that its major publisher has fast-tracked its sequel for release in December.

For first-time author Tessa Wegert, it’s no mystery what inspired her to write the first book of the two, “Death in the Family,” released in February by Berkley Prime Crime, an imprint of Penguin Random House LLC.

Ms. Wegert grew up in Quebec, but first visited the Thousand Islands about two decades ago after she met her future husband. She’s been returning to the area every summer since then, and particularly to a small island near Alexandria Bay, in the channel, owned by her parents-in-law.

The history and remoteness of the area intrigued Ms. Wegert, whose non-fiction has appeared in Forbes, The Huffington Post, Adweek and The Economist.

“A few years ago when I decided to try my hand at writing a mystery, I thought, if I’m going to set it somewhere, this is such a wonderful location,” Ms. Wegert said in a phone interview from her home in coastal Connecticut. “There’s a lot of interesting history and there’s opportunity to create situations for characters where there’s kind of a remote location and trap them there.”

“Death in the Family” is the first in a series that focuses on the life of protagonist and police investigator Shana Merchant. She arrives in the Thousand Islands following a traumatic episode in New York City. Here, she becomes a state police Bureau of Criminal Investigation officer.

“There’s history here — real-life aristocracy. This is where America’s elite come to play,” Shana’s fiance tells her in the novel.

The story in “Death in the Family” plays out in late fall and when Shana and another police investigator arrive on an island to investigate a mysterious death. But a nasty storm, a nor’easter, limits their options. All on the island become stranded. There’s a blood-soaked bed, a missing man and a mansion full of suspects, some of them heirs in a family that has generations of wealth.

Shana’s partner believes they’re dealing with a runaway case. But Shana is convinced that it’s a case of murder. As the storm intensifies, she starts conducting interviews and discovers the Sinclair family and their guests are “crawling with dark and dangerous secrets.”

“I got really interested in, ‘What would happen if there was a crime on an island?’” Ms. Wegert said. “How would that all play out? How would local law enforcement deal with a crime of that nature?”

As part of her research, Ms. Wegert contacted Jefferson County Sheriff Colleen M. O’Neill. The sheriff picked up the call when Ms. Wegert called the station.

“She just chatted with me and told me what she knew,” Ms. Wegert said. “I ended up having several other conversations with her because she was such an amazing resource. I somewhat based the character of the sheriff in the story on her.”

Sheriff O’Neill is the first elected female sheriff in New York state. Her law enforcement career began in 1984 with the New York State Police, eventually working her way up to the BCI unit as a senior investigator.

Sheriff O’Neill said she was surprised when she discovered Ms. Wegert based a character on her.

“I had no idea,” the sheriff said. “I’m honored that she chose to pick my brain and I was pleasantly surprised that there was a character in there that kind of followed the same career path that I had.”

The sheriff was sent a copy of the book and is anxious to someday meet the Ms. Wegert.

“I read the book and thought it was great,” she said.

Ms. Wegert has been writing fiction for about 10 years, mainly thrillers.

“I read a lot of Agatha Christie and golden age of detective fiction novels,” Ms. Wegert said. “I had been re-reading the Agatha Christie story ‘And Then There Were None’ around the time I decided to try mysteries. I correlated that story with this story taking place in the Thousand Islands, and at the same time, my kids were really getting into playing the board game ‘Clue.’ All this kind of came together and those are the type of mysteries that I like the best — those traditional ones.”

She was worried about the story becoming “cliche at times.”

“Because those are some very familiar tropes, if you will,” Ms. Wegert said. “But I took this kind of traditional story and tried to give it a contemporary twist.”

In her previous unpublished books, Ms. Wegert said she wrote by the “seat of her pants” as she went along.

“This time around with the complexity of it, particularly with the number of characters and the different subplots going on, I thought that might be a little bit tricky and take far too long to sort through,” she said. “So I wrote an outline that was about four or five pages long that basically touched on every major action point I wanted to have occurred in each of the chapters.”

But that outline changed, basically who did it and why, as she progressed. The reader guesses and deducts along with protagonist Shana Merchant.

“I like that as a reader — to follow the detective throughout the story and just getting glimpses into what they’re thinking and then having that big reveal at the end is such a big payoff for readers,” Ms. Wegert said.

The second book in the Shana Merchant series, “The Dead Season,” is scheduled for release on Dec. 8.

“It also takes part in the Thousand Islands, but part of the story shifts to Vermont, where Shana is from,” Ms. Wegert said. “In that book, you’ll get a lot more of her back story and delves a lot deeper into her connection with Bram, the serial killer who abducted her when she was working in New York (city).”

Ms. Wegert previously lived in Chicago, and when she talks to her acquaintances, many are left scratching their heads about the location of the Thousand Islands.

“My experience has been that when I talk about the area, most people have never heard of it before. That makes it seem like such a well-kept secret,” she said. “Part of me worried a little bit that by writing this book, I would expose it to more people and I didn’t necessarily want that and didn’t know if the locals wanted that either because it’s so quiet, quaint and charming because it doesn’t have that overly commercial feel to it.”

After a decade of writing fiction, scoring the publication of two books in one year with a major publisher is “kind of unbelievable” for Ms. Wegert.

“Readers will like the fact that the second book is coming out so quickly,” she said. “It actually was fast-tracked. It was supposed to come out next February. Readers won’t have to wait so long to find out what happened with some of the loose ends at the end of the first story.”

Ms. Wegert also said she and her agent had a bit of luck when pitching “Death in the Family,” her first attempt at a novel, to publishers.

“My agent started submitting this first book to editors right around the time when the locked room mystery concept was coming back into fashion,” she said. “There were several other authors who had written other locked room mysteries that had an Agatha Christie vibe to them and people were really interested in that. I didn’t know that when I first started writing this book. It was just my good fortune that’s how it turned out and my timing was right when the story was ready to submit.”

Her success can also be linked to her tenacity. She now looks back to the early fiction she wrote.

“I think, would I really be comfortable with those being on the market now? I’ve come so far from that point and as with anything else, the more you do it, the better you become. I’ve been working on the craft of writing all these years and I’m at the point now where I know my style, know my voice and I’m comfortable with the genre that I’ve chosen. I don’t know if any of that would have happened if I didn’t put in those 10 years.”