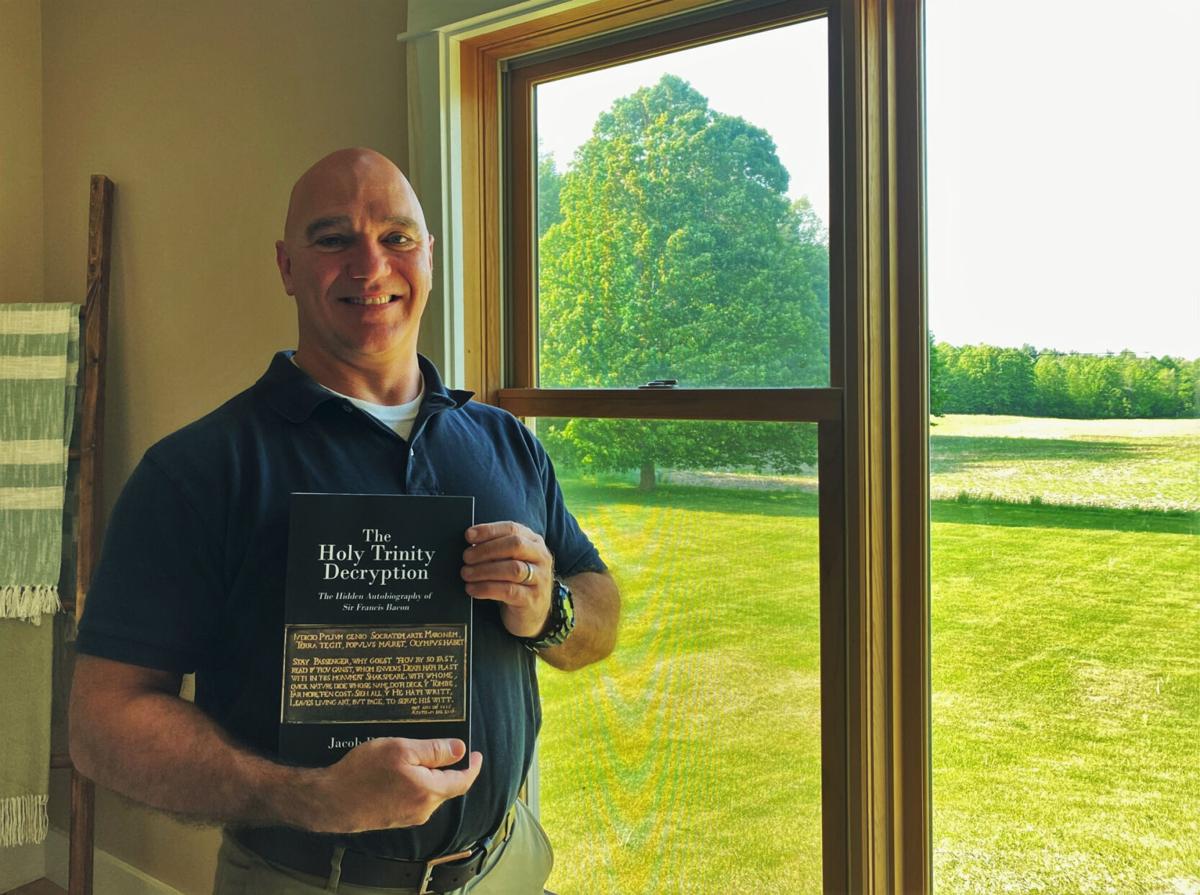 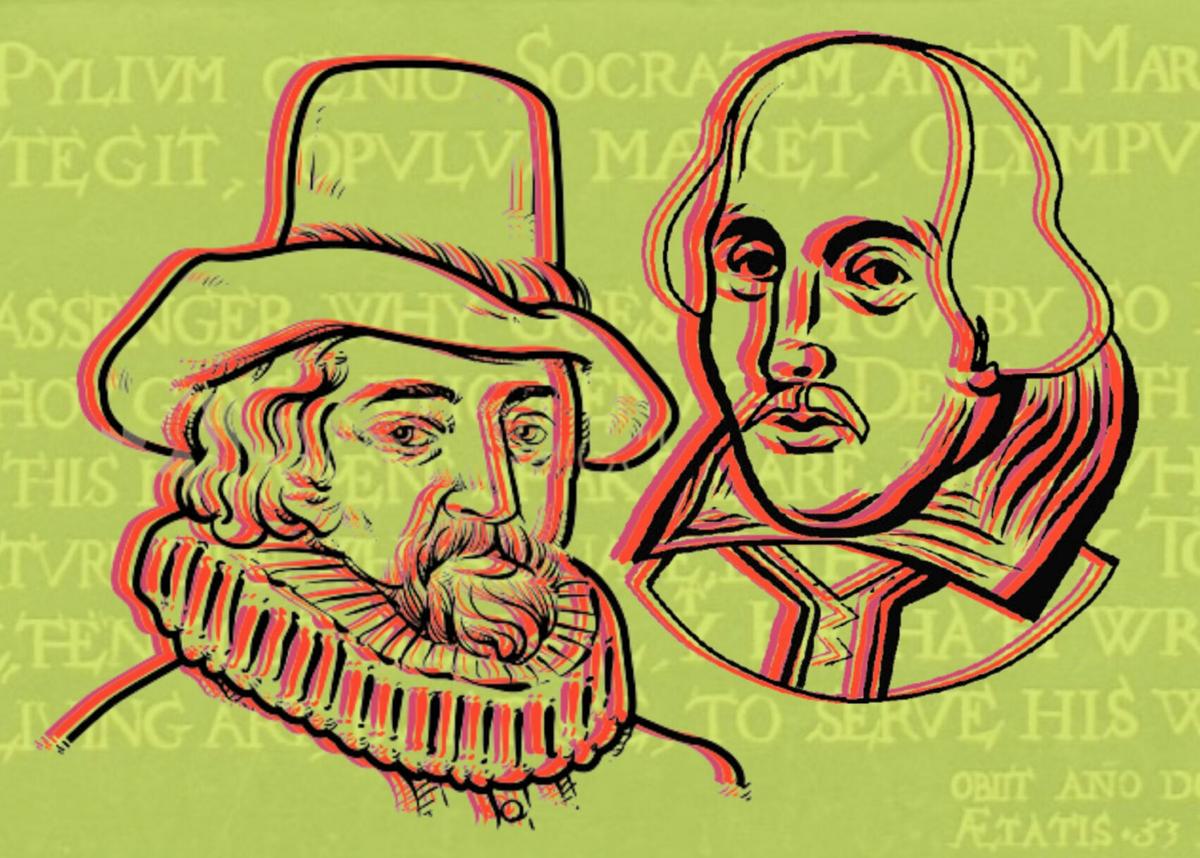 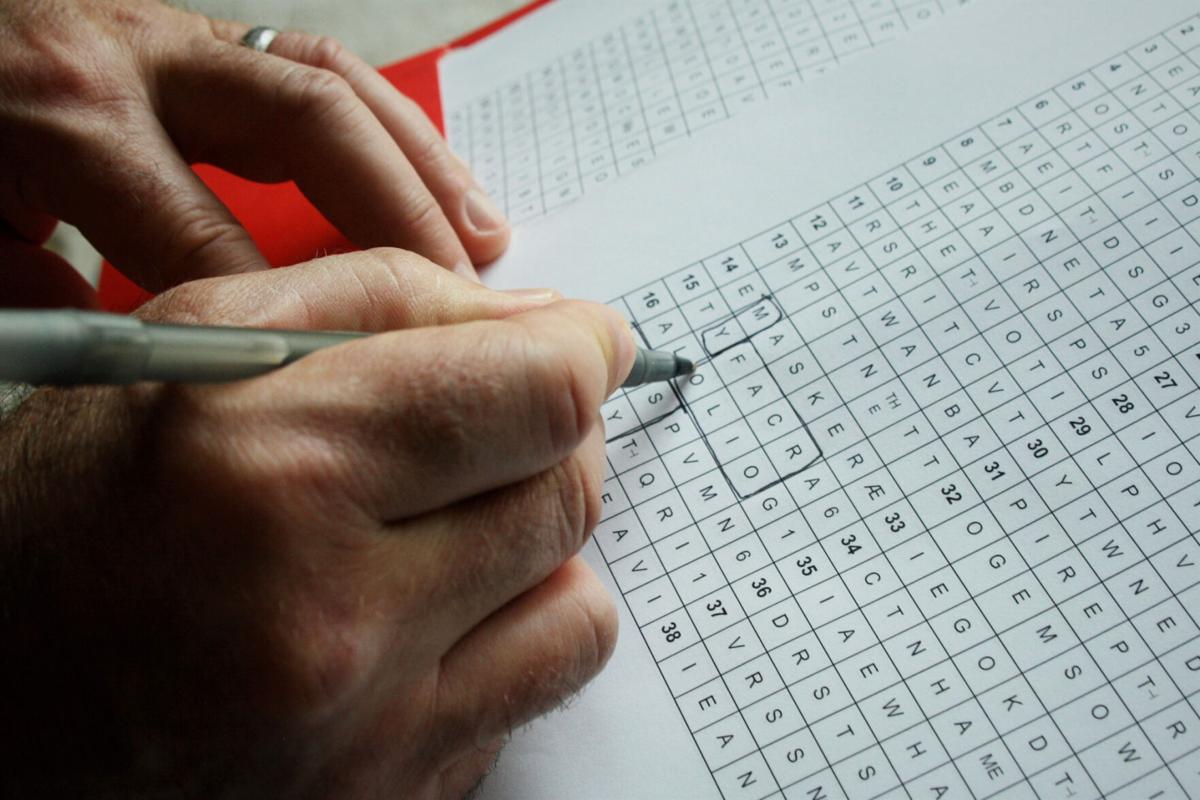 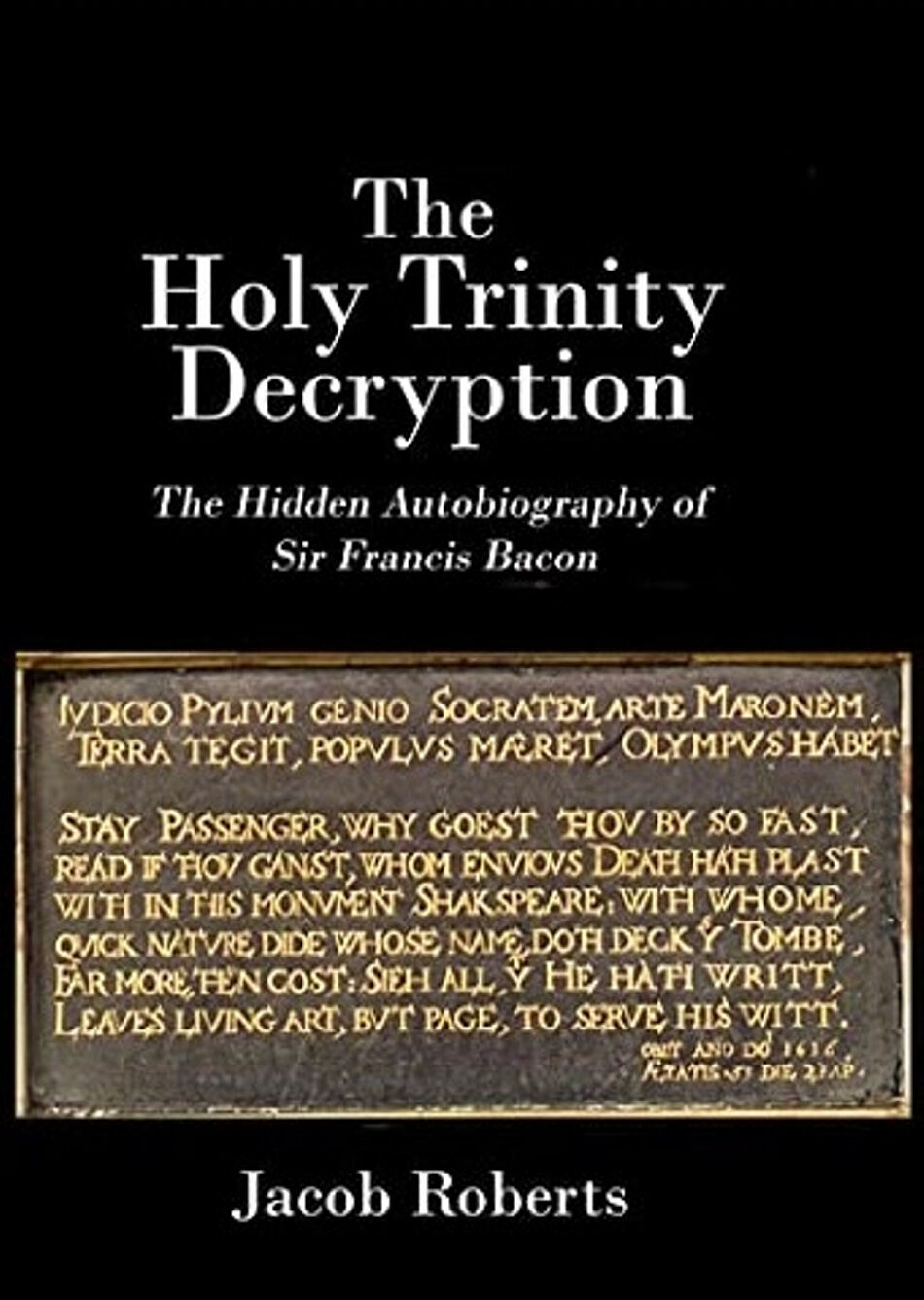 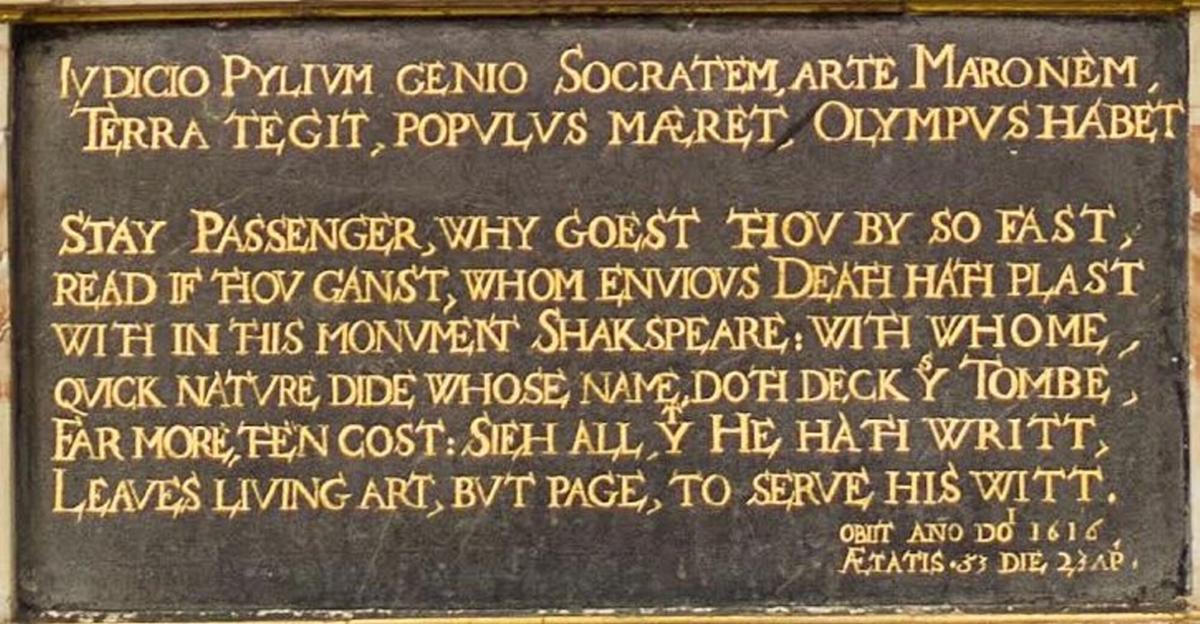 William Shakespeare’s funerary monument, often called the Stratford Monument, at Holy Trinity Church in Stratford-upon-Avon, England, features a plaque below a bust of the 16th-century poet.

William Shakespeare’s funerary monument, often called the Stratford Monument, at Holy Trinity Church in Stratford-upon-Avon, England, features a plaque below a bust of the 16th-century poet.

The high school English teacher was sent home from Potsdam Central last spring, with educators and students nationwide settling into virtual classrooms. Still teaching full-time and biding time locally near his home southeast of the village, Mr. Roberts found himself scribbling in a notebook while waiting for students to sign on for lessons. His scrawls became much more calculated over 14 months as an intertwining narrative took shape: William Shakespeare’s funerary monument contains coded messages.

“Instead of going stir crazy, I just focused my attention on this little project,” Mr. Roberts said. “And it turned into a really huge project.”

After a few years of casual interest stemming from the Oak Island mysteries and increasingly earnest research, Mr. Roberts has penned his first book, “The Holy Trinity Decryption: The Hidden Autobiography of Sir Francis Bacon.”

The 369-page paperback edition was published in April by Slewfoot Publishing and is available on Amazon and as a Kindle text.

“The Holy Trinity Decryption” focuses on a singular plaque that appears below a bust of the 16th-century poet, together known as the Stratford Monument at Holy Trinity Church in Stratford-upon-Avon, England. Shakespeare was baptized, married and buried at the Church of England site, about 40 miles northwest of Oxford.

Inscribed on the plaque is a paragraph with an opening phrase imploring passersby to stop and remember Shakespeare’s work. Three dozen plays and more than 150 sonnets are the centerpiece of a 400-year-old scholarly debate over who actually wrote the works for which the middle class Stratford man is credited.

Doubt is commonly underlined by circumstantial evidence in the literary content itself — works are imbued with the French language, intricacies of the English court and depictions of Italy, content some argue would have been out of Shakespeare’s educational scope. Supporting claims point to the First Folio — collected comedies, histories and tragedies — as containing coded messages revealing Shakespeare as a proxy.

Researchers tend to agree a man named William Shakespeare existed and died in 1616, and that the legacy of The Bard’s works is powerful and eternal. But for every new book or essay asserting definitive Shakespearean authorship, another presents a different history, and factions of theorists have developed around several 16th-century contemporaries.

Popular notions include the works were written by a group of people or by one alternative person. The 17th Earl of Oxford Edward de Vere, the Countess of Pembroke Mary Sidney Herbert, playwright Christopher Marlowe and Sir Henry Neville are all represented in theories.

Based on his research and decryption, Mr. Roberts belongs to yet another camp: Sir Francis Bacon wrote Shakespeare.

“This was definitely an accident,” Mr. Roberts said of where his research took him. “A happy accident, but an accident just the same.”

Bacon was a scientific and philosophical politician and lawyer, prominent in noble and cultural circles. He’s often credited as setting the foundation for the modern Scientific Method, and he developed his own cipher systems, including a bilateral cipher with similar principles as the binary code more formally developed years later in the 17th century.

To understand how Mr. Roberts drew his Baconian conclusion, a reality television series must first be considered. Enter “The Curse of Oak Island.”

Premiering on the History Network in 2014, the series’ eighth season aired in November, concluding in early May. The show follows a team of treasure hunters searching for Oak Island’s hidden secrets off the shore of Nova Scotia, Canada. Legend is central to the team’s starting points, with engineering and scientific approaches used in digs on the island.

Friends of Mr. Roberts were studying Shakespeare’s Stratford Monument for the show when they asked him to look at the plaque as a steganography tool.

Unlike direct substitution ciphers that might be readable with a corresponding code, steganography uses an already readable message to conceal a different one. In other words, the jumbled letters of a simple substitution cipher are an obvious visual cue of encryption. Even the presence of a secret contained in a readable sentence is trickier to detect, let alone a secret’s meaning. The specific encryption method used in the plaque — transposition — made the cipher text more covert still.

“It really is like learning another language,” he said.

Just as Mr. Roberts was diving deeper into the plaque’s 305 characters, the COVID-19 pandemic was gearing up. He read books and taught himself how to identify and read keys written by Bacon himself.

“There are all these little clues, that by themselves don’t mean anything,” Mr. Roberts said. “But when you add them all together, along with the context of all the different messages within it, all of a sudden you say: ‘I have something.’”

Using five transposition keys, a series of ciphers, the fixed English alphabet, context markers and corroborating theories that Bacon was The Bard, Mr. Roberts decrypted multiple messages and documented every step of the process.

The messages embedded in the Stratford Monument, which is separate from Shakespeare’s grave at Holy Trinity, indicate Bacon was responsible for the plaque’s text and state that he used the name Shakespeare, according to Mr. Roberts. The book title specifies a “hidden autobiography,” Mr. Roberts said, because the cipher texts explicitly identify Bacon’s parentage and aliases he may have used as an English spy and legal adviser to Queen Elizabeth I.

“Today people are skeptical, and they should be,” Mr. Roberts said. “But we’ve forgotten how important ciphers were back in the day. Anyone who was literate, anyone of nobility was using their own cipher systems.”

Mr. Roberts has been teaching English in Northern New York and exploring literary symbolism for nearly 30 years. He said he’s likely not the first person to apply cryptography principles to the Stratford Monument, and that there’s more to discover. Up next is further investigation of Bacon’s possible aliases.

For his students, cryptography newcomers, authorship skeptics and devout defenders of Shakespeare as Shakespeare, Mr. Roberts said he hopes readers of “The Holy Trinity Decryption” remember one thing: “There’s still wonder in the world.”

No matter the mind that imagined the timeless lines, Mr. Roberts added, the artistry of Shakespearean word and performance doesn’t change.

“Brevity is the soul of wit,” Lord Polonius tells King Claudius and Queen Gertrude in “Hamlet.”

Opening “Twelfth Night,” Duke Orsino says “If music be the food of love, play on.”

And “The Tempest” reminds us: “Hell is empty, and all the devils are here.”

“The art of the work itself stands up on its own,” Mr. Roberts said. “Nothing will ever change that as far as I’m concerned.”

To keep up with Mr. Roberts’ work, visit theghostsofbacon.com.