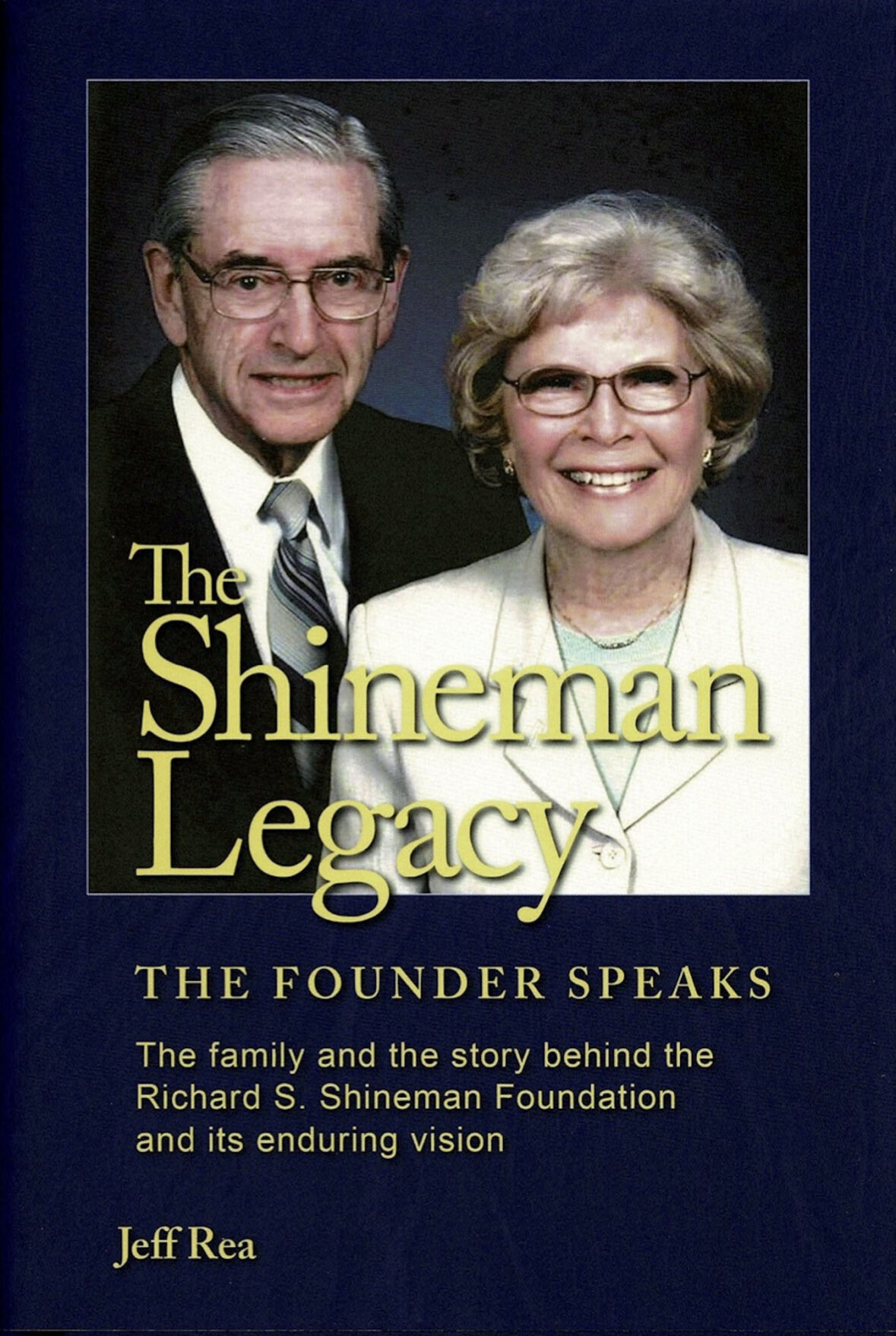 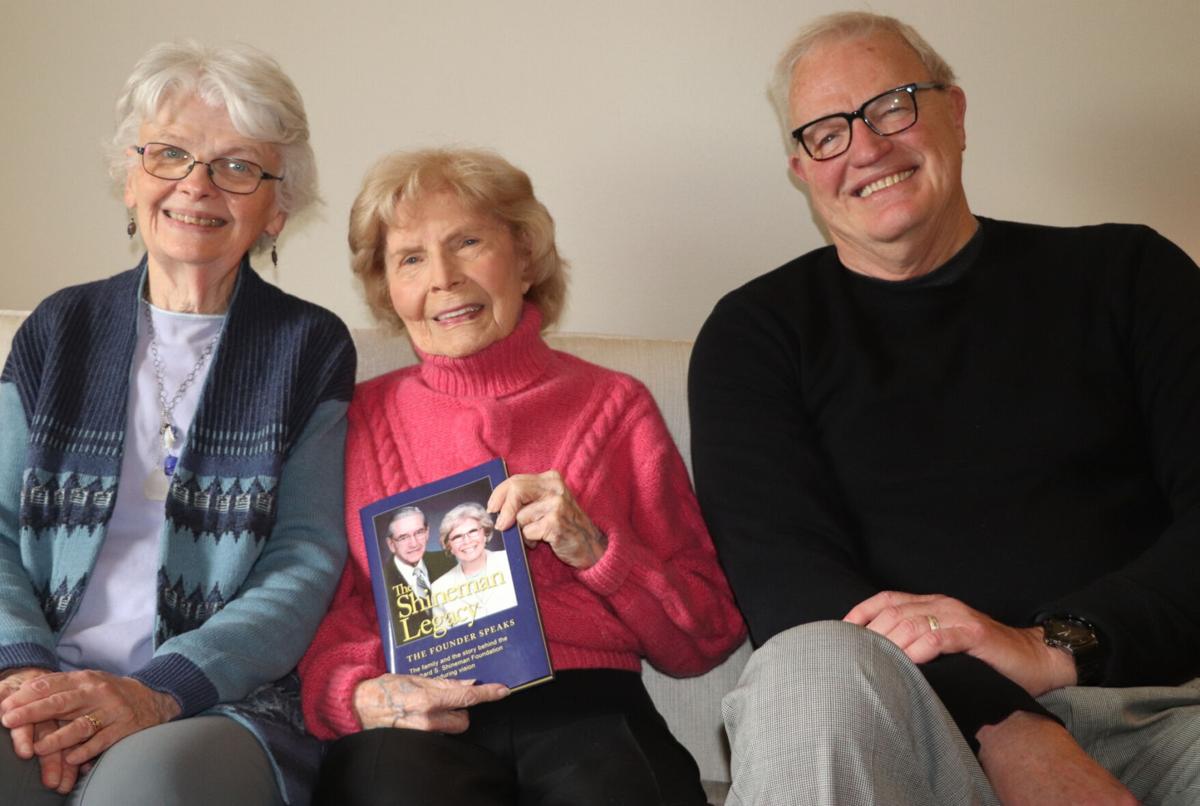 OSWEGO — “The Shineman Legacy: The Founder Speaks,” a new book released on Wednesday, April 21, explores the lives of two SUNY Oswego professors who met in middle age, lived humbly and productively — and gave a fortune to create a foundation that today serves a key role in making Oswego and Central New York a better place to live.

Author Jeff Rea, a newspaper veteran as well as a SUNY Oswego alumnus and former employee, and the Richard S. Shineman Foundation announced the release, on Barbara Shineman’s 93rd birthday.

Tuesday, April 20 was a “Happy Book Day,” as the author and a delegation from the Shineman Foundation surprised the charitable organization’s founder at Barbara’s current home in Fayetteville in time for her birthday. She expressed delight at the finished product, some 16 months in the making following a dozen lengthy interviews in early 2020.

Ten years ago, the tiny, iron-willed Barbara set about bringing to life her husband Dick’s wish in his 2010 last will and testament: to use Dick’s inheritance of his father’s Beech-Nut baby food and chewing gum fortune — wealth that Dick actively grew until his own death — to make a lasting impact in Oswego County and the region in education, science, economic development, human services, the environment, the arts, and so much more.

The book reads as memoir, philanthropic history — and as a romance. It includes dozens of color and black and white photos from the early 20th century to the present.

The germ of an idea for a memoir-like book to honor and preserve Dick Shineman’s legacy was Barbara’s; she and daughter Kathy Barker invited Rea to write it, and the Shineman Foundation commissioned the work, which began early in the challenging and tragic year of 2020.

“The Shineman Legacy” also highlights the evolution and growing maturity of the Shineman Foundation, whose endowment has grown from Dick’s initial bequest of $25 million to over $38 million today. By the end of 2020, income from astute investments overseen by the foundation’s board had accounted for $11.7 million in grants — and counting — to dozens of nonprofits around Oswego County as well as regional organizations offering programming in the county.

The book explores the vastly different childhoods of Barbara Ann Irvine of Albion and Richard Shubert Shineman of Canajoharie: Barbara, a child of the Great Depression, grew up relatively poor; Dick had a privileged upbringing that included prep school at Deerfield Academy in Massachusetts. Both worked as professors at SUNY Oswego; Dick as founding chair of the college’s chemistry department and Barbara in elementary education, starting at SUNY Oswego’s former laboratory for teachers in training, the Campus School.

In Barbara’s own words, “The Shineman Legacy” conveys the sweep of her and Dick’s unassuming and generous lives, with the twists, turns and tragedies that have marked their years: her marriage at 19 to Robert E. Palmer, and her widowhood at 43; her and Dick’s meeting in a church parking lot, and their eventual marriage and happy life in Oswego, on campus and in retirement; the too-early death of her son, and the births of children, grandchildren and great-grandchildren; and their separate and mutual gifts of money and time.

Perhaps the best-known donation came about posthumously for Dick, in 2012, when the newly formed foundation made a naming gift to SUNY Oswego of $4 million over 10 years — supplemented by Barbara’s own $1 million gift — for the 233,000-square-foot, state of the art Richard S. Shineman Center for Science, Engineering and Innovation.

For more than eight years, the foundation that also bears Dick’s name has made hundreds of grants to nonprofit organizations, large and small, including the Oswego Renaissance Association, Fulton Block Builders, Pulaski’s LaVeck Concerts, the Rural Transportation Center, the Red Cross, Children’s Museum of Oswego, and many, many more.

“The Shineman Legacy: The Founder Speaks” is available now at the river’s end bookstore, 19 W. First St. in Oswego, and via its website, riversendbookstore.com. It is independently published. The dust jacket, cover and colorful interior were designed by Peter Allen Music and Art of Syracuse.