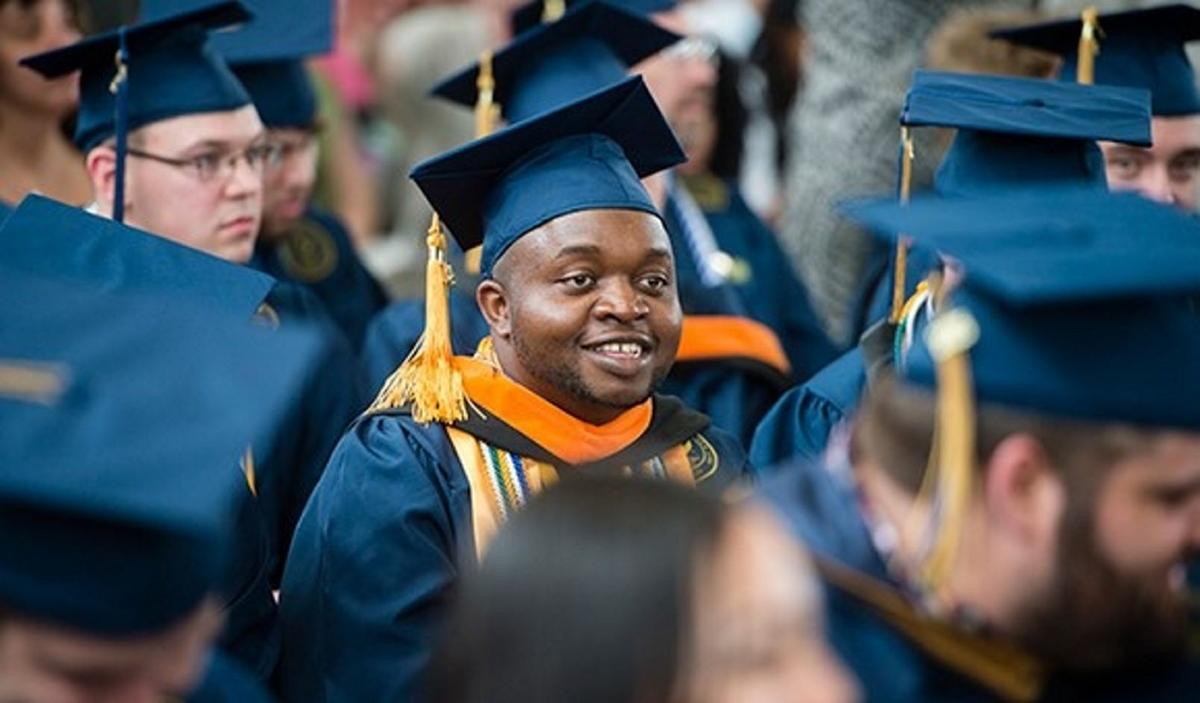 Pierre Nzuah graduating from SUNY Canton in 2015. Mr. Nzuah came to Canton from Cameroon where he grew up in a mud brick hut. He later earned a master’s degree from Clarkson University. Greg Kie photo 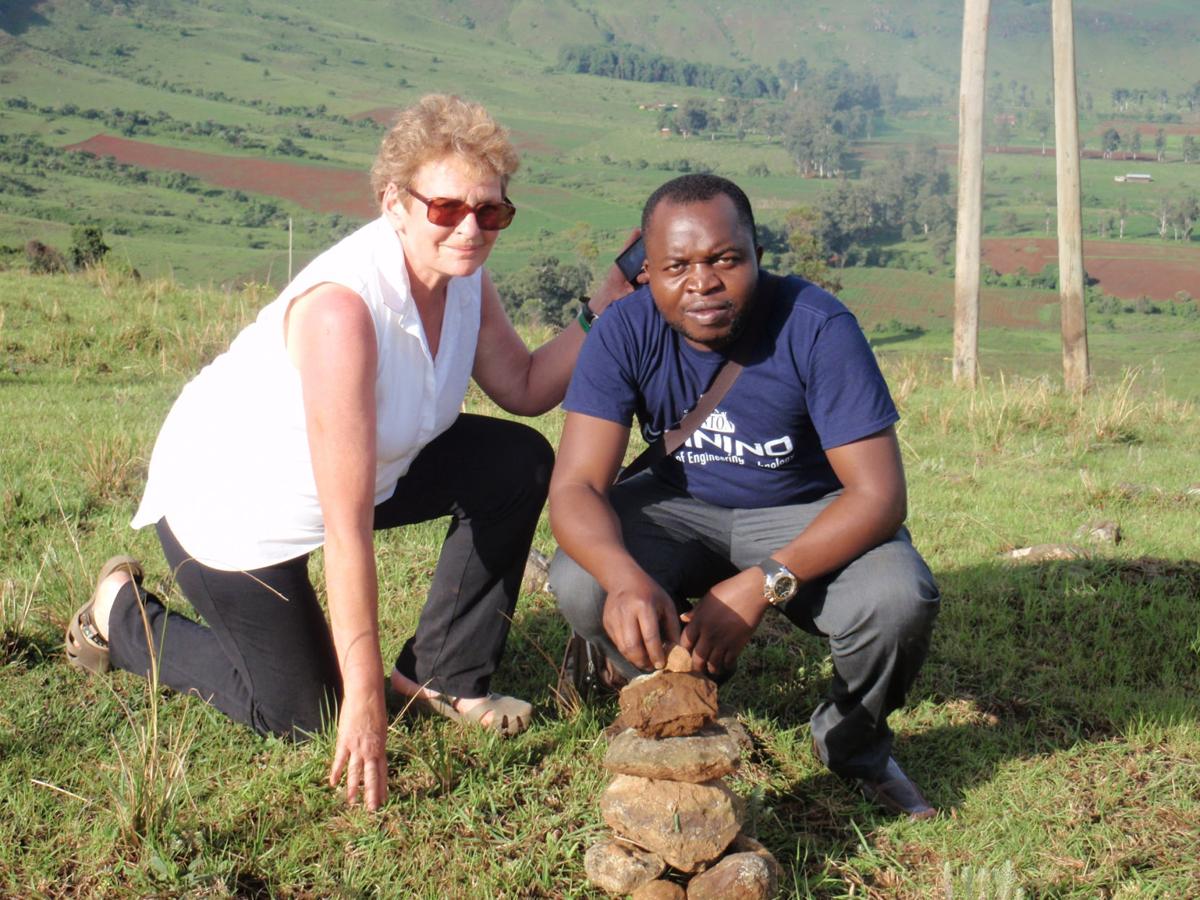 Pierre Nzuah with his American mother Ellen Rocco in Cameroon in 2015 while visiting Mr. Nzuah’s homeland after his graduation from SUNY Canton. Photo provided 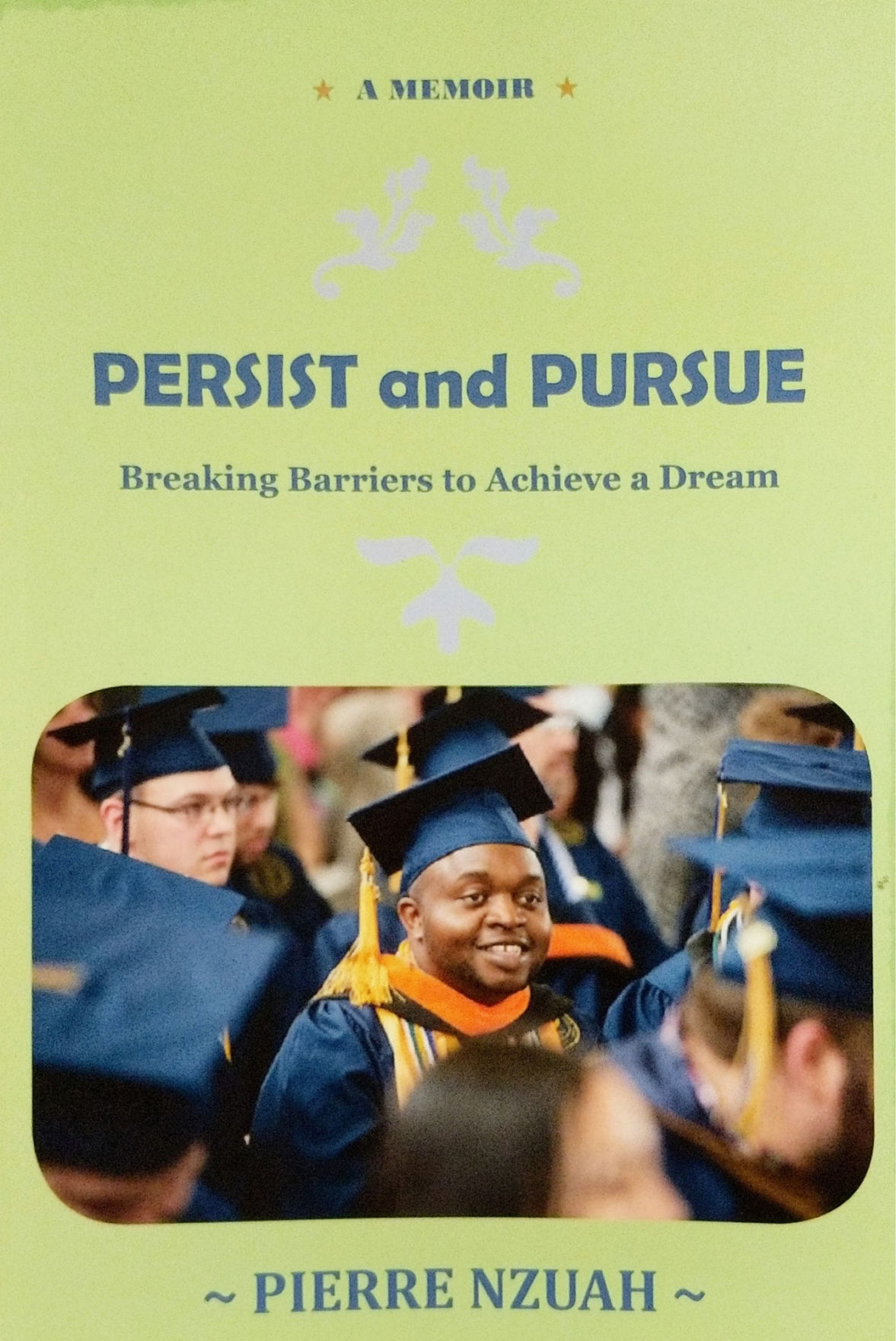 Pierre Nzuah graduating from SUNY Canton in 2015. Mr. Nzuah came to Canton from Cameroon where he grew up in a mud brick hut. He later earned a master’s degree from Clarkson University. Greg Kie photo

Pierre Nzuah with his American mother Ellen Rocco in Cameroon in 2015 while visiting Mr. Nzuah’s homeland after his graduation from SUNY Canton. Photo provided

Pierre Nzuah approached the challenge of writing his memoir like an engineer. The recently published book, “Persist and Pursue, Breaking Barriers to Achieve a Dream,” tells the unlikely story of a boy raised in a mud brick hut in Cameroon who becomes an electrical engineer designing substations in Liverpool.

“I had a lot of dreams in my life,” Mr. Nzuah said from his apartment, where he has been working since the pandemic shutdown began. “But, I never had a dream that I would someday be writing a book.”

Mr. Nzuah tells his story methodically, year by year and, once he lands in America, semester by semester.

“I had no idea how people write books. My dream was to be an engineer,” he said. He wrote the book because he was encouraged by the many people who heard his story of hard work, persistence and success.

The book begins in the Baligham village in the northwest region of Cameroon. His childhood was something someone in North America would be hard pressed to even imagine.

“My family is polygamous — two wives and one husband,” he wrote. “My parents were subsistence farmers, and the farm work was mainly done by my mother and ‘stepmother.’ My mother, Odette Ngegang (aka Mama Bar), has seven children — six boys and one girl. My stepmother, Mboying Suzanne (aka Mami Suzanne), has eight children — two boys and six girls.”

To begin his education, Mr. Nzuah had to take an ill-fitting uniform from his older brother and sneak off each morning. When his father discovered he is attending school, he only agreed to pay his tuition if he came in first in his class.

He managed to meet his father’s demands. This first of many obstacles was likely the smallest challenge he faced in getting an education in the Equatorial African nation.

Mr. Nzuah said he struggled with the parts of the book that dealt with his childhood.

“It was really depressing, going back and reliving,” he said. “There were parts of my past life that I did not want to relive. I would start writing and I would get emotional and I would just stop.”

The incredible series of events that led Mr. Nzuah to St. Lawrence County roll out before the reader at a steady clip. He lives on his own as a middle schooler — not at a boarding school — he had to find a place to live, find a way to feed himself and somehow finish at the top of his class to continue on. If any one of those things hadn’t happened and if he hadn’t overcome dozens of other obstacles that would have made most people give up, Mr. Nzuah would not have completed his journey.

Part II of his book, Overcoming Daunting Odds in America, opens at Hancock International Airport in Syracuse. It is January of 2011. He hadn’t considered the weather while making plans in Cameroon.

“I had seen snow. I watched a lot of American movies when I was in Cameroon,” Mr. Nzuah said. “I saw snow on TV, but when you see stuff on TV you have it in your brain that this is just a movie. Landing at the airport and seeing all these piles of snow. I was thinking, is this real?”

In the book he describes his first step outside in America:

“As soon as I went through the door, it felt as if someone with huge palms was grabbing and squeezing my face — it was so freaking cold! I rushed back inside. Now I understood what the pilot meant by 20 degrees below zero. I had left Cameroon during the dry season when the temperature rarely fell below 80 degrees. I was still dressed in my black suit and pointy dress shoes. I had no winter coat, no hat and no boots. I am going to die here, I said to myself.”

Mr. Nzuah was unique for an international student. He had no money and was not sponsored by his country. But, he soon found himself surrounded by caring teachers and administrators and more importantly a church family at the First Presbyterian Church on the Park in Canton and an American mother in Ellen Rocco, the former North Country Public Radio station manager.

Mr. Nzuah spent his summers in the U.S. living and working on Ms. Rocco’s farm in DeKalb. She accompanied him on two trips back to Cameroon, helped him find money for school, helped him establish a charity that aids schoolchildren in his home region and gave his book its first edit.

“I wrote the book and then got Ellen to edit because she knows the most about me,” he said.

It took three years to write and get the book published, Mr. Nzuah said.

He spent time unsuccessfully trying to get agents interested and then ended up self-publishing with Bloated Toe Publishing from Peru.

His goal, he said, was to simply get the book out to hopefully have an impact on young students.

“That is something I want to accomplish with this book,” he said. “I hope it can reach a younger audience like middle and high school kids. A lot of them could learn from my experience.”