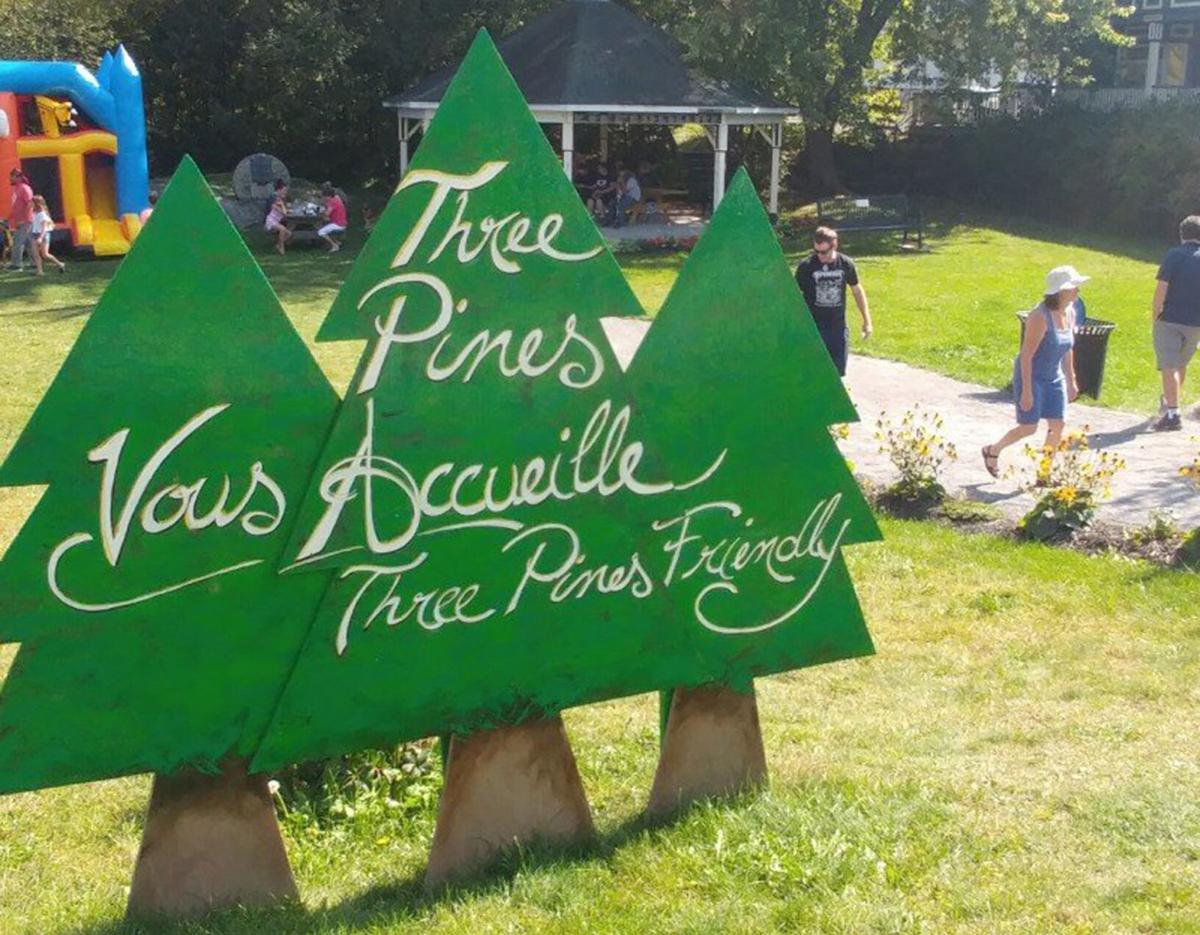 A cutout of Three Pines welcomes visitors to the village park in Knowlton, Quebec, hub of a visit to mystery author Louise Penny’s fictional universe, which began with with her first book of the series, “Still Life.” (Danielle Viau/threepinestours.org/TNS) 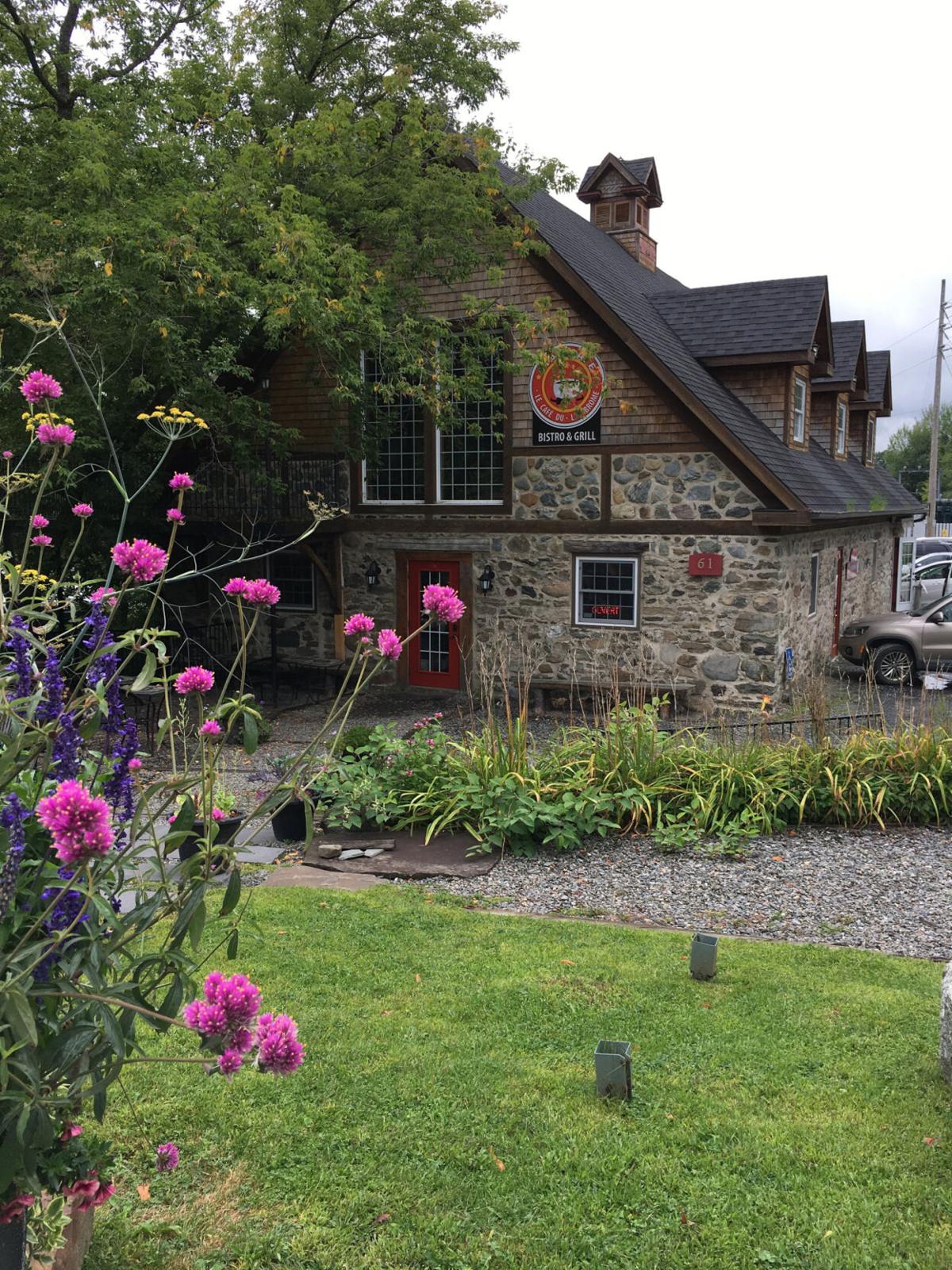 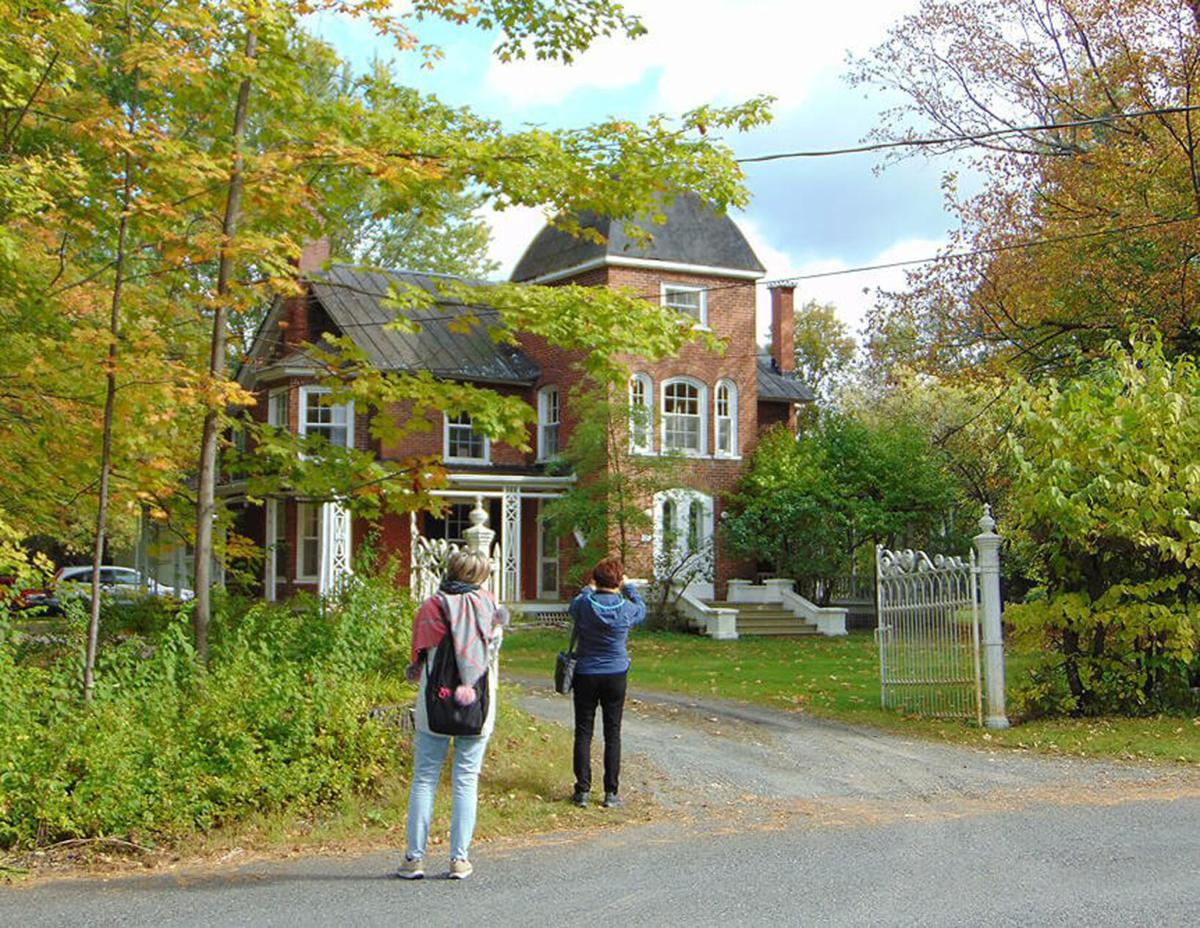 Visitors on a tour of sites mentioned in Louise Penny’s Three Pines mysteries snap a picture of a house that reminds them of one in the books. (Danielle Viau/threepinestours.org/TNS) 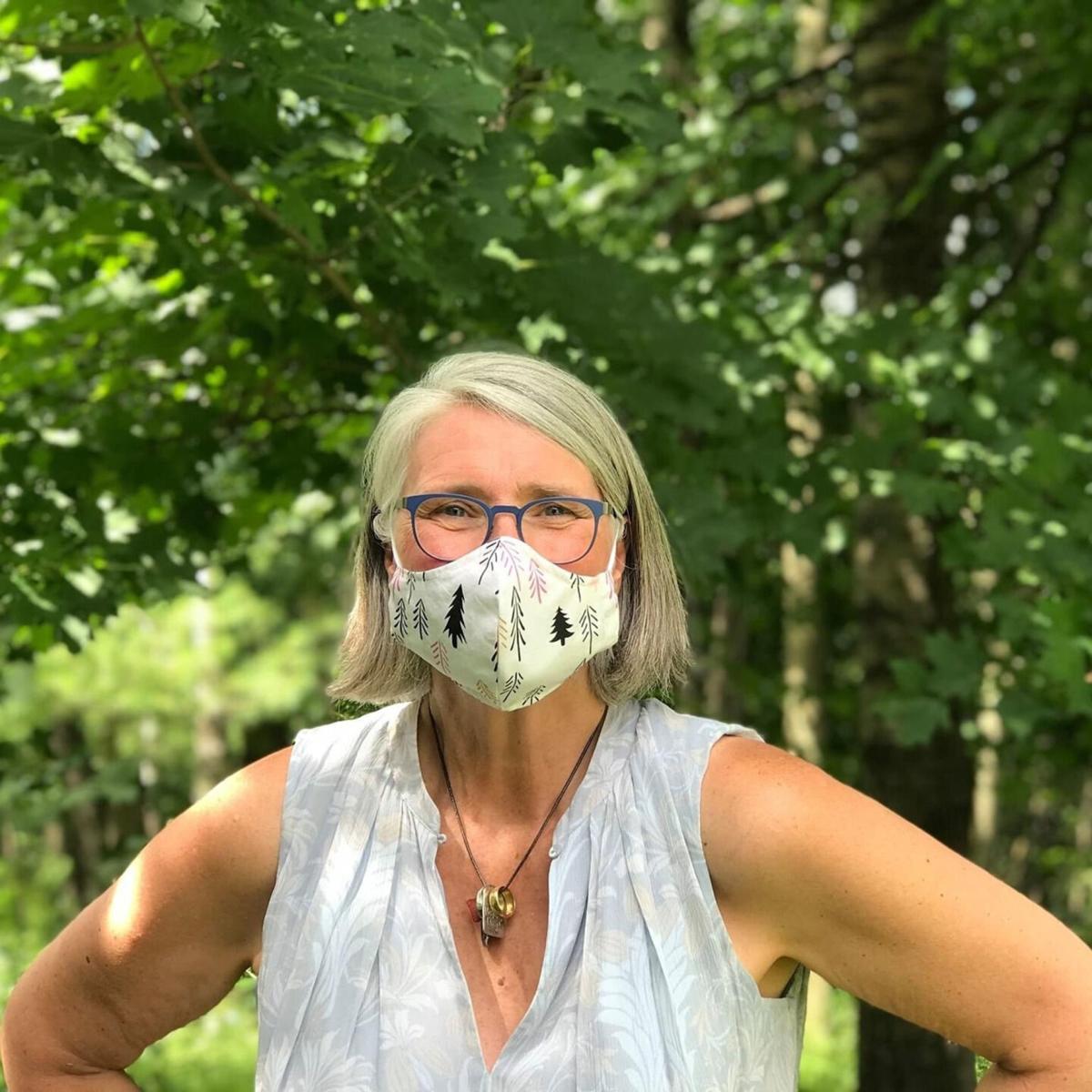 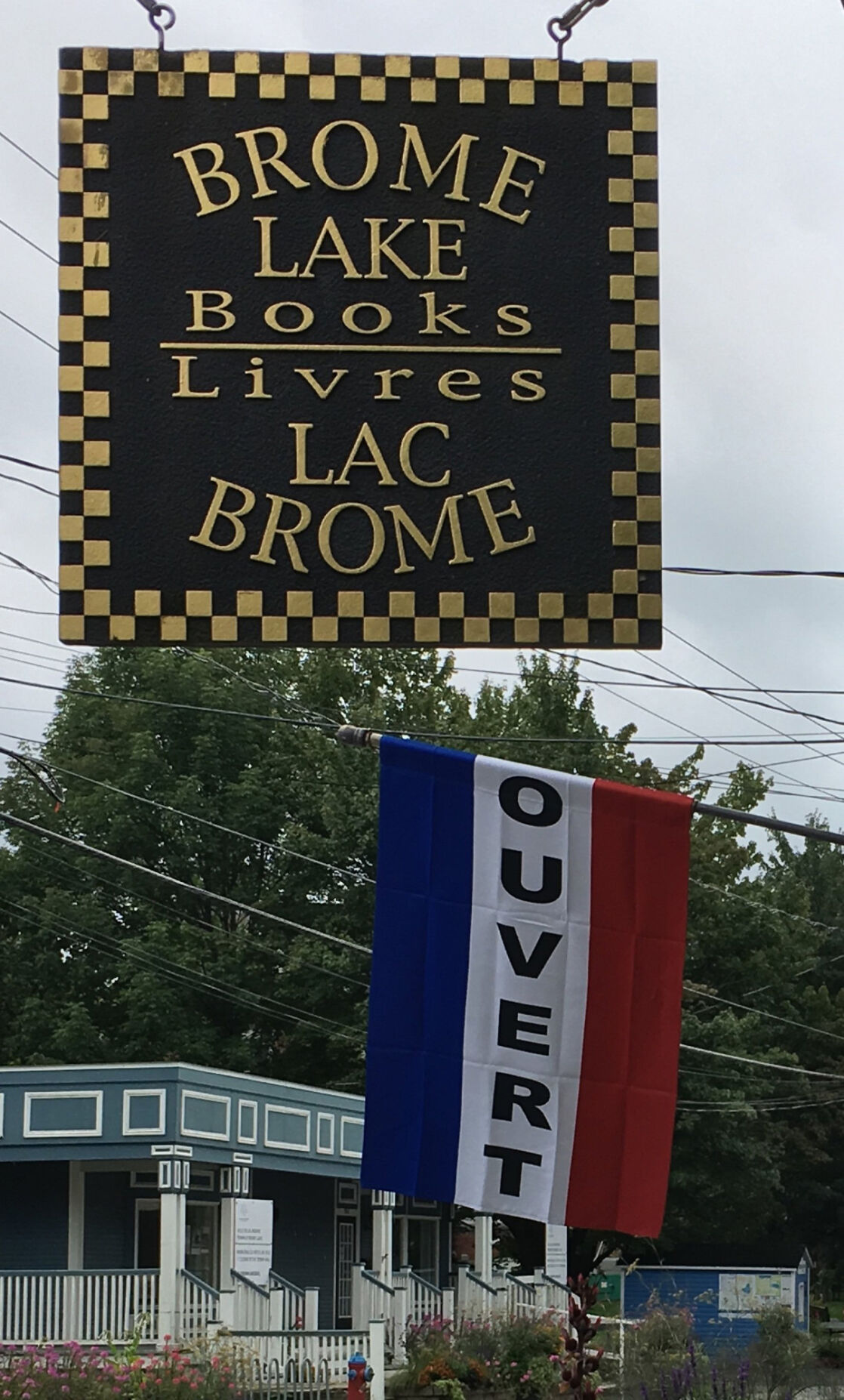 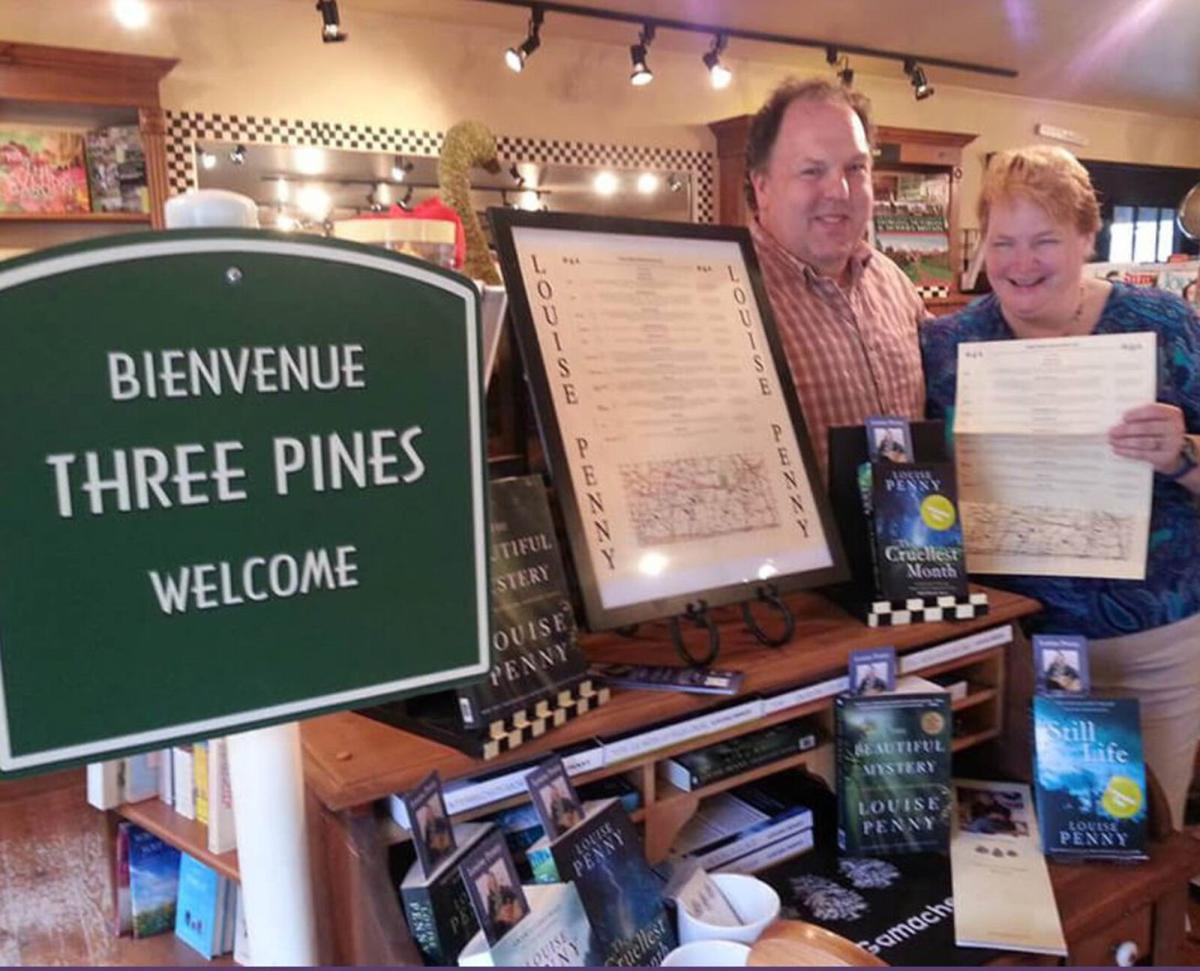 Danny McAuley and Lucy Hoblyn are proprietors of Brome Lake Books in Knowlton, Quebec, a first stop for visitors to the fictional Three Pines. (Danielle Viau/threepinestours.org/TNS) 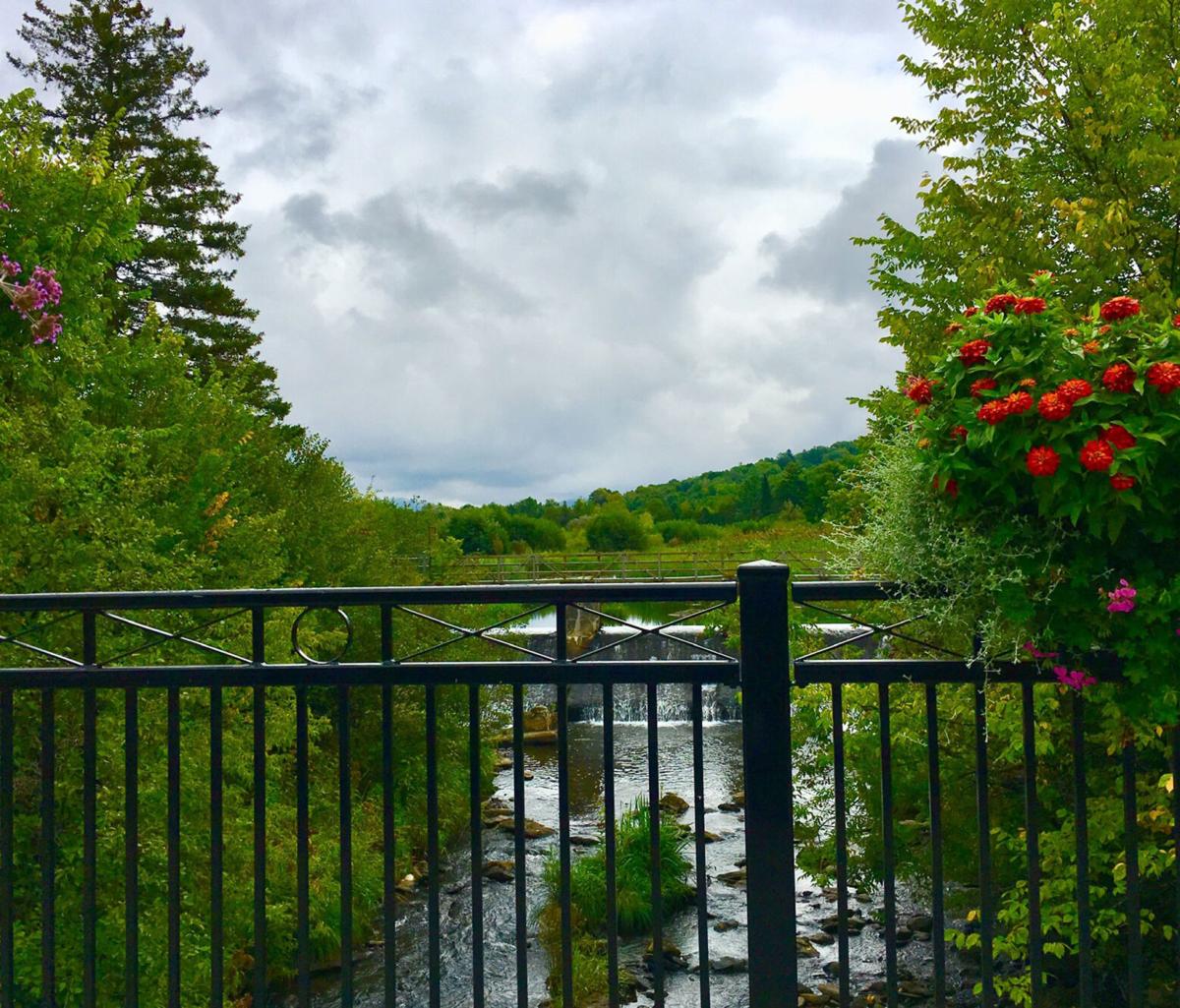 A stream running through Knowlton, Quebec, is sure to remind visitors of the Rivière Bella Bella in the fictional Three Pines. (Gail Pennington/TNS) 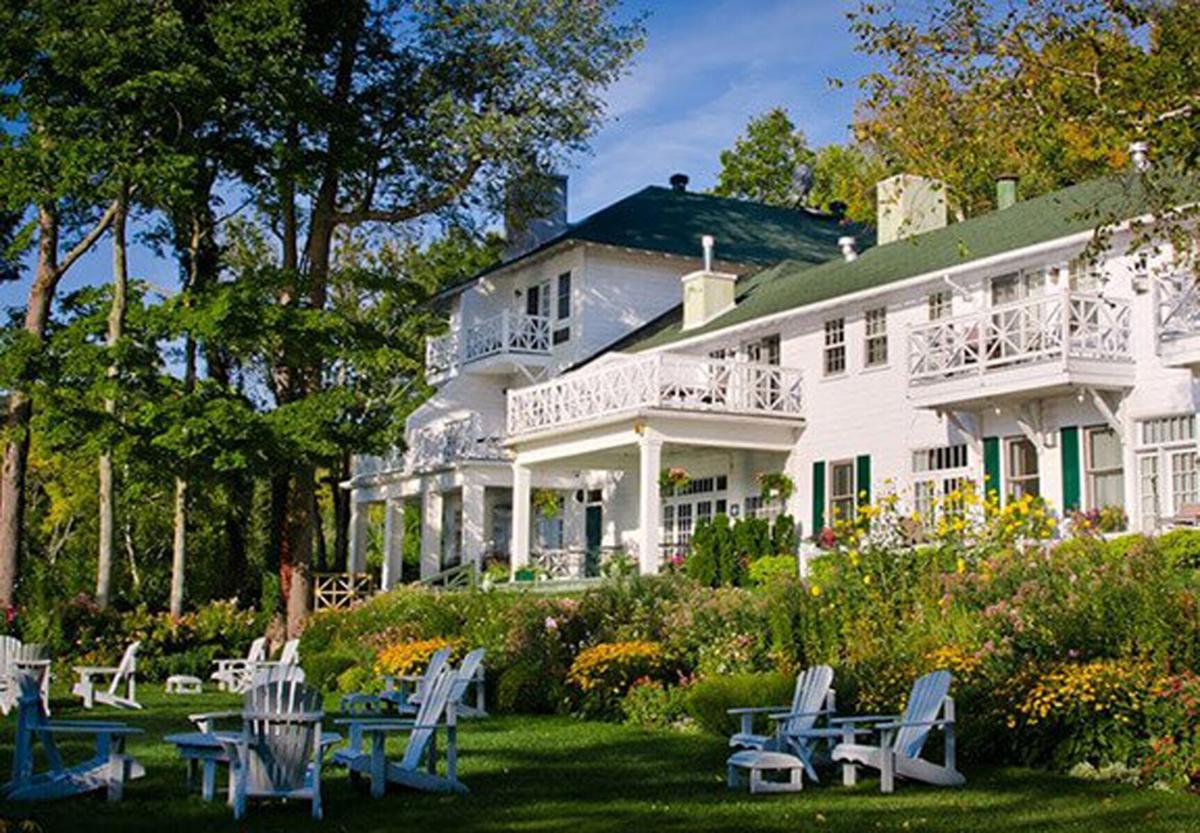 A cutout of Three Pines welcomes visitors to the village park in Knowlton, Quebec, hub of a visit to mystery author Louise Penny’s fictional universe, which began with with her first book of the series, “Still Life.” (Danielle Viau/threepinestours.org/TNS)

Visitors on a tour of sites mentioned in Louise Penny’s Three Pines mysteries snap a picture of a house that reminds them of one in the books. (Danielle Viau/threepinestours.org/TNS)

Danny McAuley and Lucy Hoblyn are proprietors of Brome Lake Books in Knowlton, Quebec, a first stop for visitors to the fictional Three Pines. (Danielle Viau/threepinestours.org/TNS)

A stream running through Knowlton, Quebec, is sure to remind visitors of the Rivière Bella Bella in the fictional Three Pines. (Gail Pennington/TNS)

KNOWLTON, Quebec — Louise Penny adores her adopted village of Knowlton in Quebec’s Eastern Townships. And she’s delighted that her Three Pines mystery series has inspired fans to make the trek southeast from Montreal, searching for sites mentioned in her books and hoping, magically, to stumble into the real Three Pines.

The bookstore was smaller (it has moved and enlarged twice) and Knowlton was quieter when Penny published “Still Life,” the first book in the Three Pines series, in 2005. In it, a murder brought senior cop Gamache and his team, including right-hand man Jean-Guy Beauvoir, from Montreal to a tiny village in southeast Quebec, so far off the map that it was almost invisible, and filled with charming eccentrics — and at least one killer.

Minus the murder, the discovery was similar to Penny’s own. Originally from Toronto and a former radio broadcaster, she moved to Knowlton with her husband, Dr. Michael Whitehead, who died in 2016 after battling Alzheimer’s.

The village gave Penny the sense of community she had been looking for. “I had spent a lot of time moving around,” she said recently by phone from her cozy living room. Wanting nothing more than home and roots, “I found that here,” and that inspired the Three Pines community others now find so welcoming.

Danielle Viau leads highly recommended tours of “Three Pines,” including sites mentioned in the books or ones Penny has said inspired her fictional locales.

“I started the tours in 2018 with the endorsement of Louise,” Viau said by email. “The idea came from the fact that no matter what day of the week, you would always see fans of Louise in the village. So I thought, let’s do a tour to showcase the different sites that have inspired Louise to create this fabulous Three Pines.”

The tours “immediately took off with great success. Ninety-six percent of participants are fans from the States, 26 different states last year, then from Australia, Belgium, Peru, England, Canada,” Viau said. Fans “want to see it all and soak it all up. Some have arrived with T-shirts they had made specifically for the trip. A few have even cried being so happy to see a site.”

On a day trip from Montreal last fall, two of us regretted not having time for the tour ($295 Canadian per person for a full day; threepinestours.com), instead covering as much ground as we could on our own.

Our first stop was Brome Lake Books (Livres Lac-Brome, 42 Lakeside Road), an airy, wood-floored oasis that is three quarters well-stocked independent bookstore and one quarter everything Three Pines, including mugs, T-shirts and even licorice pipes, as sold in the fictional Bistro. The Louise Penny reading corner, with a guest book and comfortable rocking chair, is dedicated to Penny for her “talent, inspiration and commitment to this community.” (“Vive Gamache,” the sign concludes.)

The bookstore sits on a stream that might be the Riviere Bella-Bella, the Beautiful Pretty River that runs through Three Pines and flooded disastrously in last year’s “A Better Man.” Its bridge is a perfect spot for picture taking, as is the bench with the plaque “Surprised by Joy,” in memory of Penny’s late husband.

Across the parking lot from the bookstore, we followed a sign saying “Bistro” and wound up having a late breakfast at the Star Cafe, where Olivier and Gabri, proprietors of the Three Pines Bistro, were nowhere to be found, but the bacon was artisanal and delicious. We were too early for a blowout Sunday lunch at Le Relais in L’Auberge Knowlton (286 Knowlton Road; aubergeknowlton.com), said to be an inspiration for the Bistro so pivotal to life in Three Pines.

Pick up a Three Pines Inspiration Map at the bookstore to trek farther on your own. But be aware, as locals will warn you, that some of these spots are farther afield than you might expect. For that matter, traffic makes the drive from Montreal to Knowlton take close to 90 minutes. To get the full experience, plan to spend at least one night; we’ll do that next time.

Consider, maybe, a sojourn at Hovey Manor in North Hatley, the spectacular inspiration for Manoir Bellechasse, where Armand and wife Reine-Marie spend their anniversary in “A Rule Against Murder.” Chances are very good that no corpses will turn up under fallen statuary.

We did make it to Sutton, only 10 miles from Knowlton and 10 miles from the Vermont border, a chic and busy little metropolis where La Rumeur Affamee (15 Rue Principale N) at least partly inspired Sarah’s Bakery, seen in “The Cruelest Month” and other books. Enjoy the array of cheeses and the heady aroma of baked goods; take a butter tart or two home.

If you’re staying longer in the Eastern Townships, you can also hear Gregorian chants at the Abbaye du Saint Benoit-du-Lac on Lake Memphremagog. Penny called it Saint-Gilbert-entre-les-Loups in “The Beautiful Mystery,” in which Gamache and Jean-Guy investigated the murder of a singing monk. Cheeses are sold, but not, apparently, the book’s chocolate-covered blueberries.

Back in bustling civilization, Gamache fans can also take a “Bury Your Dead” walking tour in Old Quebec, visiting spots mentioned as Gamache solves a murder and unearths a long-hidden mystery, at the Literary and Historical Society. ($44.99 Canadian; toursvoirquebec.com)

As long as you’re in Quebec City, how about a side trip to Charlevoix and Baie-Saint-Paul, the artist enclave pivotal in “The Long Way Home”? The 17th century village, about an hour away, is the home of both the Algonquin School of landscape painting and of Cirque du Soleil, and is full of art galleries and craft boutiques. The area also offers spectacular scenery, including cliffs and waterfalls. (tourisme-charlevoix.com)

The Eastern Townships themselves are also beautiful, encircled by rolling, wooded hills that turn bright red and gold in autumn. (Late September and early October are the best times for fall color.) We left feeling that we had missed a lot, while still loaded down with purchases from the bookstore and other shops, plus bags of pastries.

With U.S. residents barred from entering Canada because of the COVID-19 pandemic, fans won’t be able to make the trip to Knowlton and the Eastern Townships this fall. (Viau, however, is already taking bookings for next year.) Instead, readers will travel to Paris with the Gamaches in the new book, “All the Devils Are Here,” set an ocean away from Three Pines.

The fact that we’re stuck at home makes this is a perfect time for this travel story, said Penny.

“Really, if you can’t travel, don’t you want to read about travel?” she asked. “We can travel in our imaginations.”

And in any case, Three Pines is above all a state of mind.

Gail Pennington is the retired television critic of the St. Louis Post-Dispatch. She visited Canada in September 2019.

IF YOU GO SOMEDAY

How to get there: If you won’t be in Montreal, as we were after a cruise, a convenient route to the Eastern Townships is via Vermont. Burlington is 78 miles south of Knowlton. Montreal is slightly closer in miles but is justly famous for its traffic.

Cost: Remember, everything is less expensive than it seems. The Canadian dollar currently equals 75 cents U.S.

More info: easterntownships.org and bonjourquebec.com have information on the area.