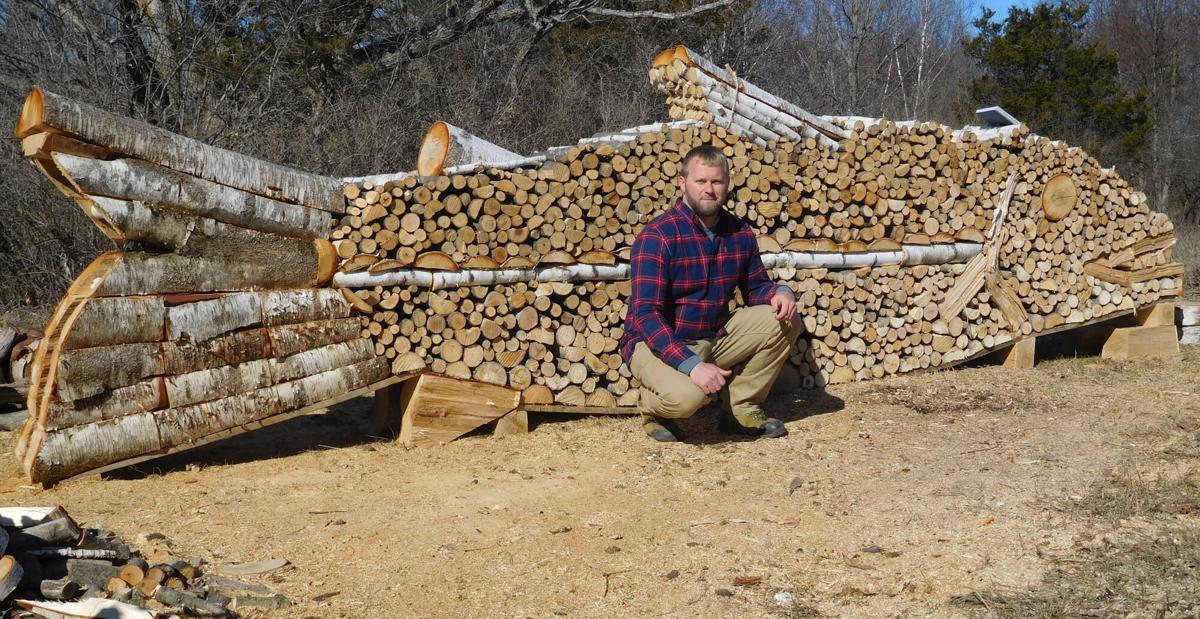 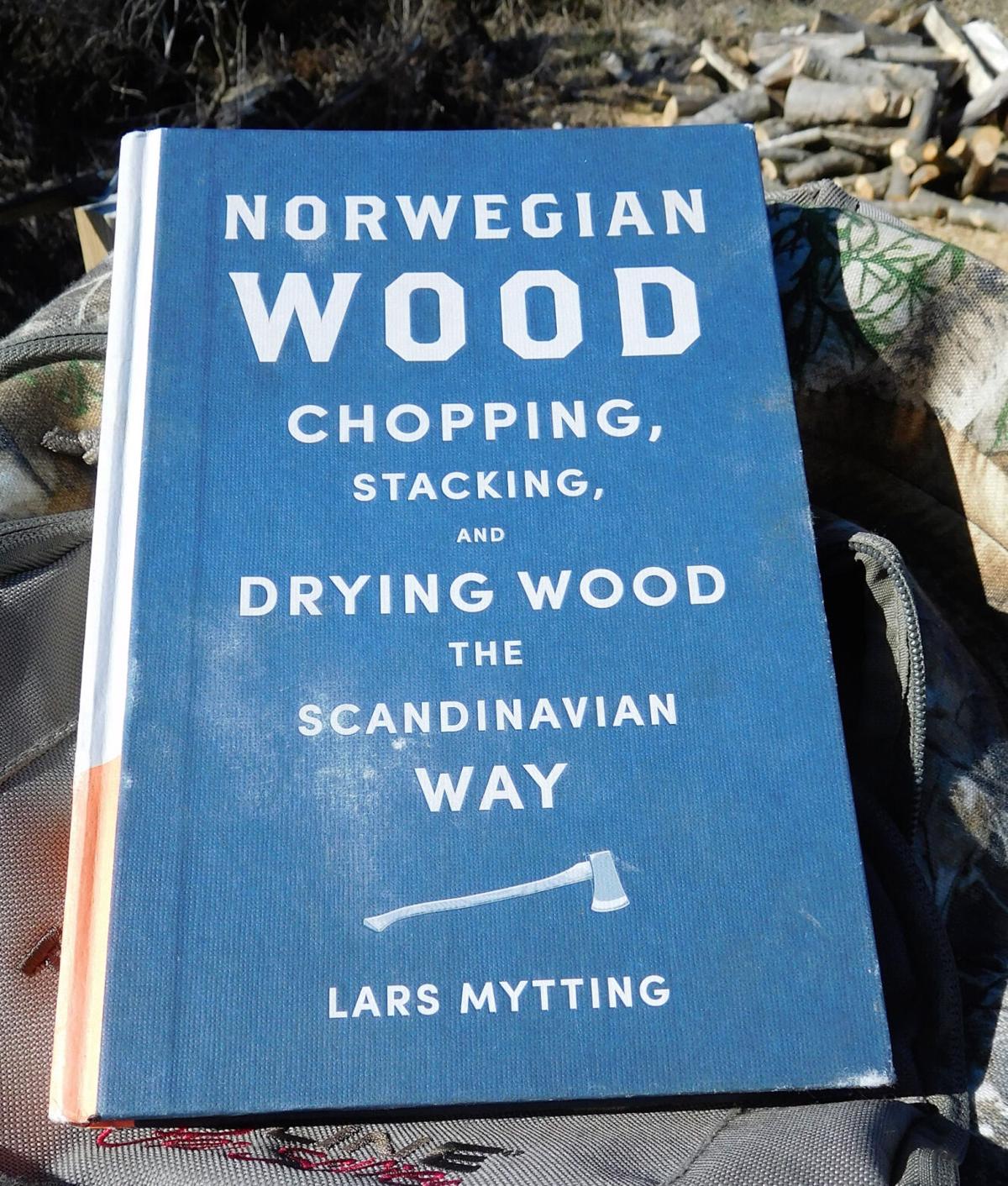 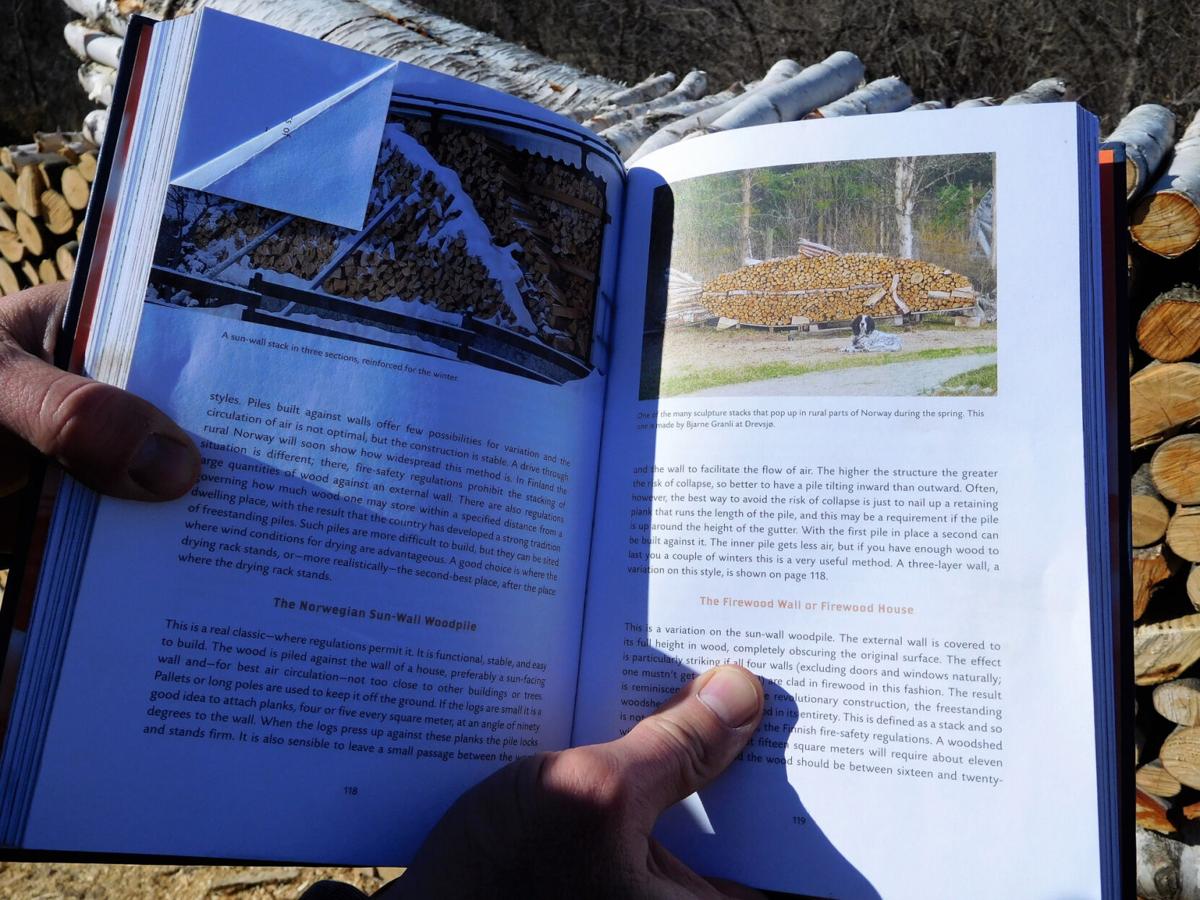 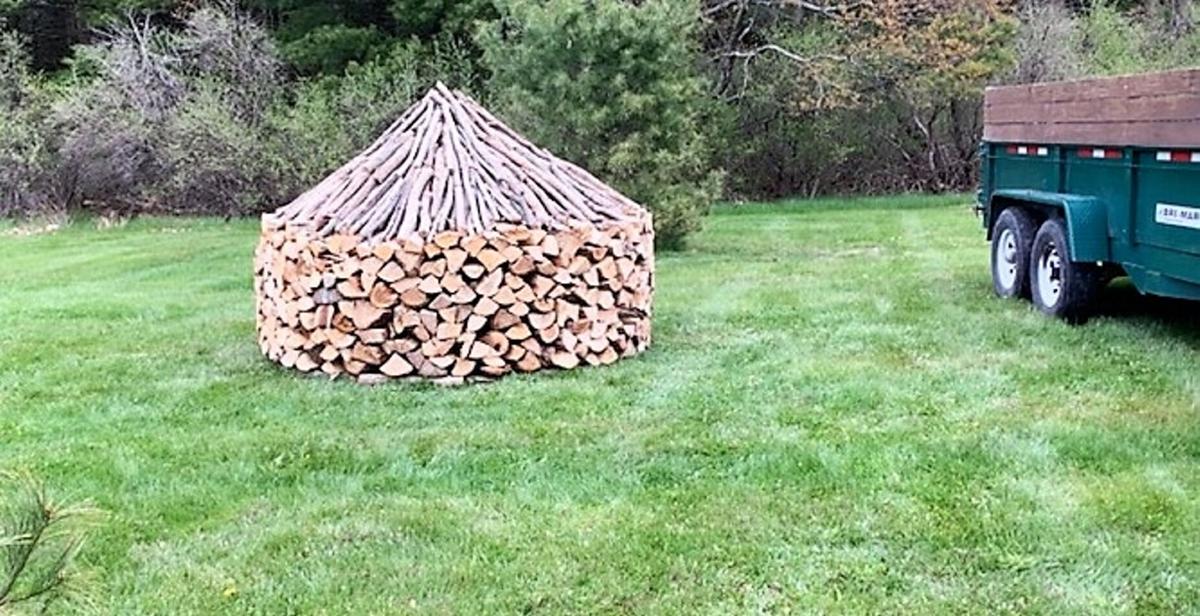 Eric J. Youngs created this circle stack as his first structure that was inspired by ‘Norwegian Wood.’’ Submitted photo 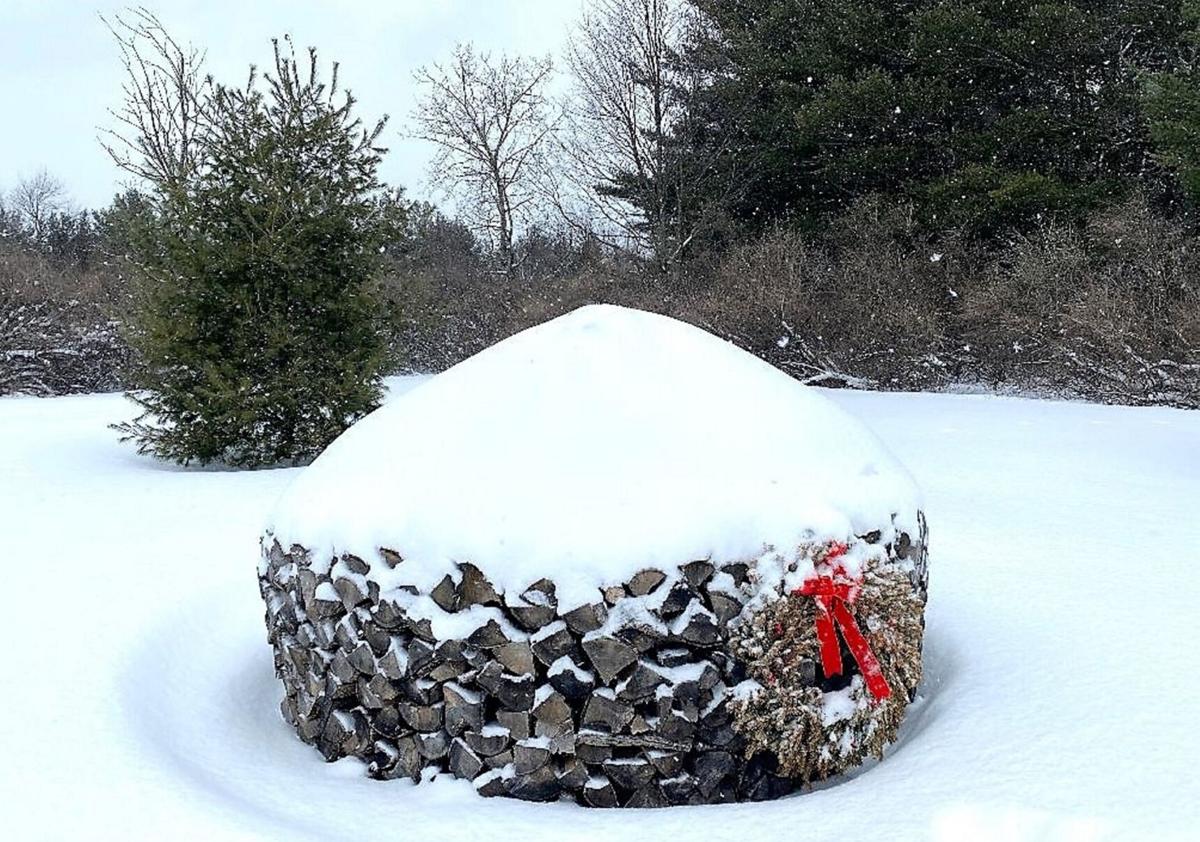 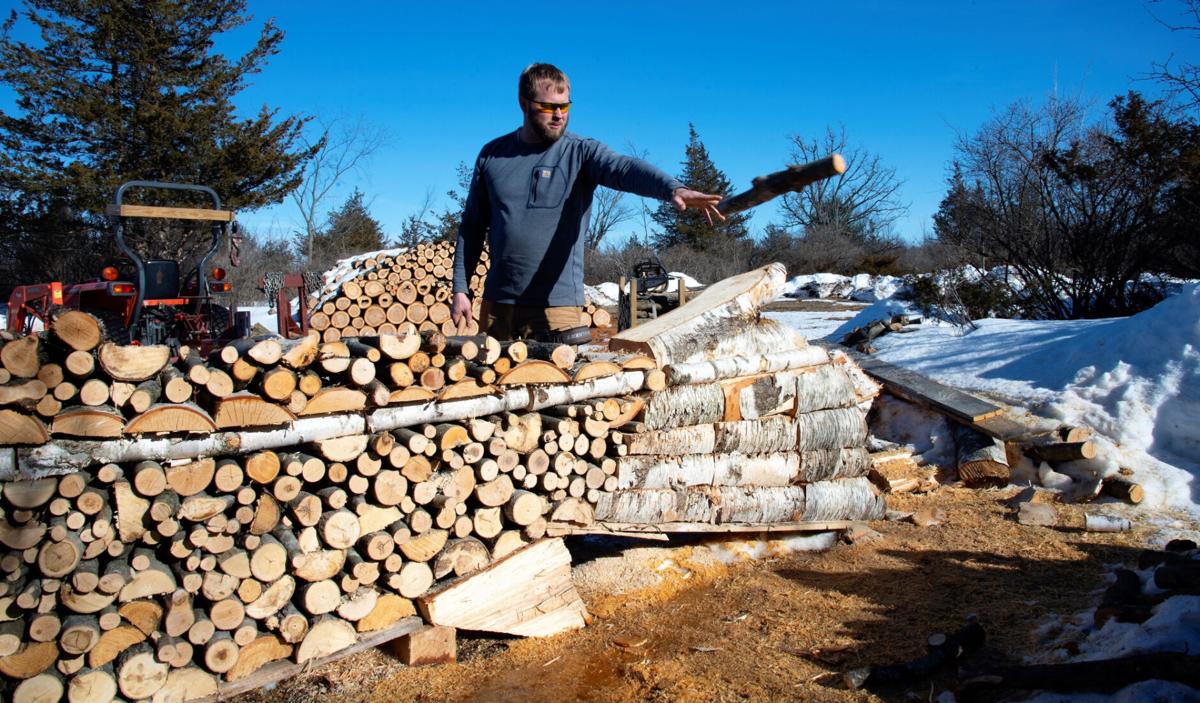 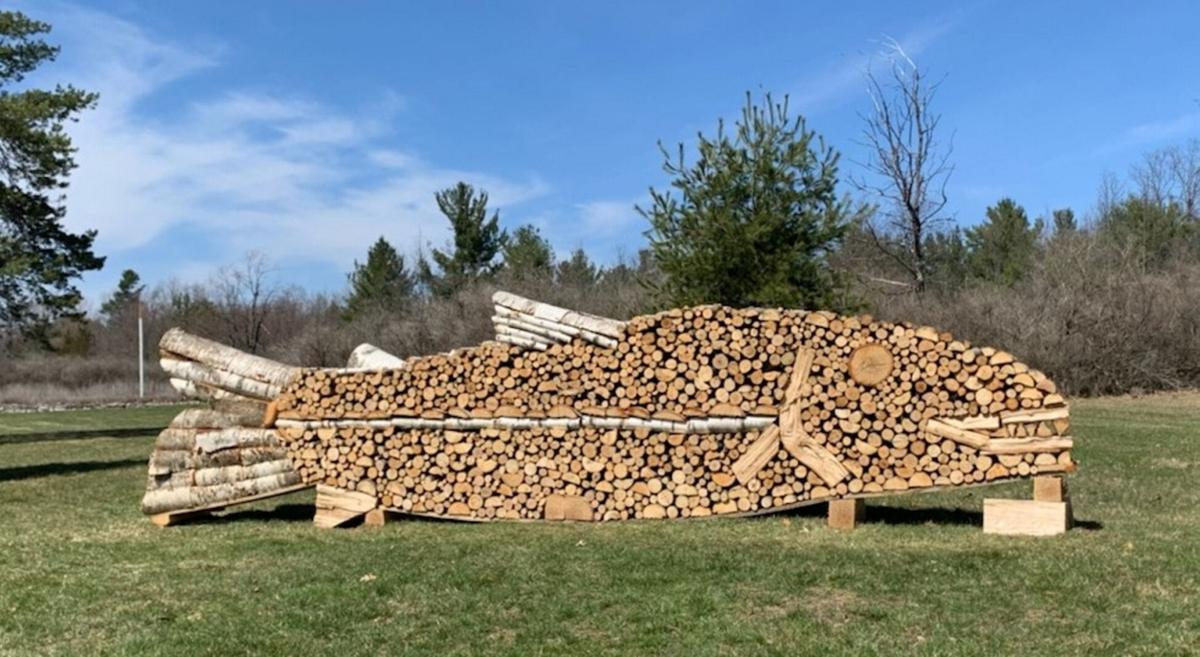 The fish/wood pile was moved to its new home off Route 12E, Clayton, on Monday and Tuesday. Photo courtesy Eric Youngs

Eric J. Youngs created this circle stack as his first structure that was inspired by ‘Norwegian Wood.’’ Submitted photo

The fish/wood pile was moved to its new home off Route 12E, Clayton, on Monday and Tuesday. Photo courtesy Eric Youngs

Eric J. Youngs has a passion for firewood that could be a result of his Scandinavian lineage. But it was a book published in 2015 that became a best-seller in Europe that lit his artistic flame.

About a week ago, Eric escorted me on a five-minute walk on a woodlot path located a couple miles past DePauville on County Route 9. At the end of the path was a fish structure, approximately 4-feet-by-12-feet, made of stacked wood, drying in the cold sun and brisk wind.

Persistence led to the creation of this fish out of water, Eric said.

“What started out as a project I thought could be completed in about a week led to a journey spanning over several beautiful winter months,” he said.

Its creation was mainly due to a book gifted to him at Christmas 2019, from his mother-in-law, who knew of Eric’s love of firewood.

The book’s back jacket says it “provides in-depth information about tree types, wood-stacking methods and stoves; it also examines the history of man’s longstanding need for warmth and his passions for open fire.”

Eric first read it with an eye on the basics: the best way to chop and preserve wood.

“The main thing it taught me was the appreciation of having seasoned wood prepared for winter,” Eric said. “In the past two years, I’ve gotten ahead on my wood so it’s seasoned while I’m burning it. I go through less wood now because it’s seasoned. In the first 10 years that I burned wood, I would always be behind, always down to my last stick. Now that I’m trying to get ahead of things, the book showed me a lot of good ways to stay ahead of my needs.”

Eric manages the land parcel off County Route 9 for its owner.

“Any tree that I cut down has to fit a code,” he said. “It has to be about to die, or blown over by the wind. So I’m just kind of combing through the woods and doing in what’s in the best interest of the land. I don’t make a single cut unless I know it’s 100 percent the right thing that’s going to benefit the forest.”

Eric, 33, grew up in Cape Vincent and now lives on House Road in the town of Clayton. He and his wife, Katie, have three daughters: Madelyn, 7, Emma 5, and Lauren, 3. Eric’s mother, Pam Gabrielsson Youngs, is a native of Helsinki, Finland and relocated to America as a young child with her family.

Eric, who owns the landscaping business Youngs Lawn and Landscaping, is also the property manager for National Geographic photographers, Clayton residents and the husband-and-wife team of David Doubilet and Jennifer Hayes.

“Eric helps me keep track of things when we’re traveling,” Jennifer said. “He’s my peace of mind, my secret weapon. If a tree comes down, he doesn’t have to call me if I’m in say, Antarctica. He just deals with it.”

Earlier this week, Eric’s wood-stacked fish creation found a new home when it was moved to Route 12E on a piece of property, an 1890s’ farmhouse, that Jennifer and David purchased about five years ago. They’ve been renovating it since then.

“I drove by it, and it was a wreck,” Jennifer said. “David said, ‘Don’t stop the car! Keep going!’ And it became a midlife crisis purchase. I saw it and said, ‘We have to have this house.’”

The property is a little over 4 acres and includes a pollinator garden.

“We’re just trying to bring it along and I wanted it to evolve with nature,” Jennifer said.

While taking breaks from his wood duties, Eric would often read “Norwegian Wood” in his truck. He began to notice the elaborate wood-stacking structures that Lars Mytting advocated. He mentioned the book and structures to Jennifer, who became fascinated and purchased a copy of the book.

She hoped Eric could build one of the structures on her farmhouse property, but he had already begun one at the wood lot.

Jennifer finds that burning wood outside is mentally soothing. She often takes hikes through her farmhouse property looking for kindling.

“I burn a lot of wood outside for peace of mind,” she said. “These wood creations become purposeful, functional art, where you can dry the wood and eventually be able to use the wood.”

In March of 2020, around the start of the pandemic, Eric began one of the structures featured in the book, a wood circle, also called a Norwegian round. It’s about 8 feet in diameter.

“My daughters and I had time on our side so we just took some of my firewood I had set aside for the coming year that was in a pile. So we made a circle. The girls played in the circle when it was empty and then we had to fill the circle with firewood, loosely thrown in. And then we made kind of a roof out of limb wood so it sheds water. In the book, they talk about how that’s a good way to season your wood. It helps keep the rain out and the sun and the wind dry up he moisture around the edges.”

The Norwegian round, after it was completed at the wood lot, was deconstructed and built again at Jennifer’s farmhouse property last year.

“I love the round wood pile,” she said. “I sit on the porch of the farmhouse and I stare at it. When I just come in from a big deadline, or I want to procrastinate on a big deadline, it’s just calming.”

It has also attracted the attention of passersby who see it from the road.

“People stop and go, ‘What is that?’” Jennifer said. “‘Do you have gnomes in your property?’ I go, that’s the Norwegian way of stacking wood. It’s called a circle stack.”

The wood consisting of the circle is now seasoned.

It took Eric about 100 hours to create the wood-stacked fish sculpture. He began it in January. During my visit, he told Jennifer, who also stopped by, “I just wanted to make sure I could get it figured out before I even considered telling you about it.”

On Saturday, April 3, the fish also was deconstructed and loaded onto Eric’s dump trailer. It was rebuilt at Jennifer’s Route 12E farmhouse property on Monday and Tuesday.

“We moved the circle stack to the other side of the property where Jen’s outdoor fire pit is, so it’s closer to the pit and to the entrance of her house where she has a wood stove,” Eric said on Wednesday.

It took Eric and Jennifer about four hours to relocate the circle stack. It took Eric three hours to deconstruct it and load it up for the trip.

It took Eric two days, working a couple hours each day, to reconstruct the fish at the farmhouse property. It’s now nestled between three white pines.

“Jen prefers that location because it’s kind of a natural stage,” Eric said.

“The wood has to cure so you get to live with that art,” Jennifer said. “It’s natural art. It’s landscape art. It’s art that comes from the land that gets to go back if you get the courage and heart to burn it.”

Does she have that courage? “I don’t know yet. I’m not going to make promises.”

The features of the fish, such as eyes, mouth and gills are birch wood. But the vast majority of body wood that makes up the fish is ash and maple limbs. Eric thinks it most closely resembles a Northern Pike.

“It was a good project for me,” he said. “It was one of the more challenging things I’ve done. It was kind of a tortuous process some days, getting things right. But it’s going to be rewarding to have it completed at Jen’s. She and Dave have spent most of their lives underwater and I think a lot of people will appreciate it.”

Eric hopes the sight of the giant fish as they cruise along Route 12E will inspire people to push through adversity, much like what he did when creating it.

“The most active ingredient in creating the fish is simple hard work,” he said. “Felling trees, skidding logs and collecting limb wood was the majority of the project — the discipline to make sure each piece obeys physics, to balance just right.”

He wasn’t discouraged on those days when the balance was off, or the limb wasn’t the perfect fit.

“I said to myself on bad days, ‘Well if this is my biggest problem in life right now, I’m doing pretty good.’”

To contact Eric Youngs for landscaping and/or artistic inquiries, write to him at eyoungs.greenscape@gmail.com.