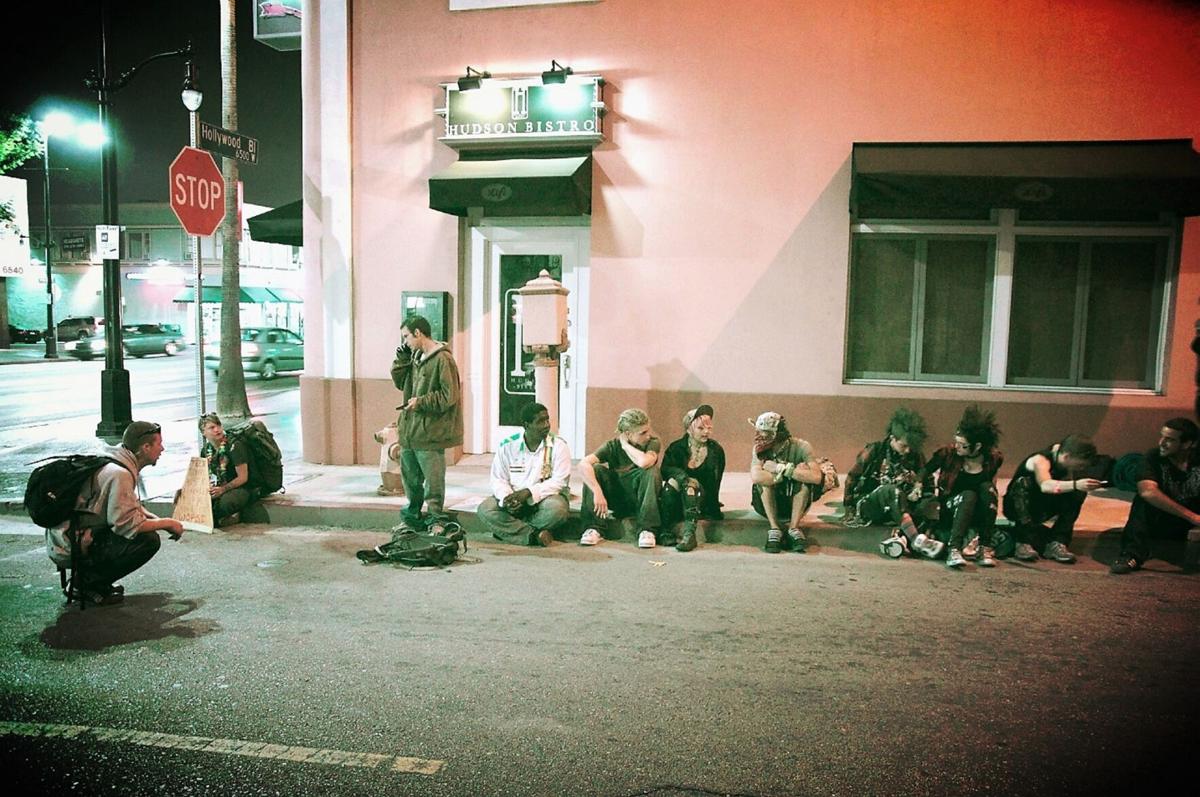 Watertown native Michael Leoni hit the streets of Los Angeles six years ago to do a public service announcement on teen homelessness. It has turned into a documentary, “American Street Kid,” released on major streaming platforms on Saturday. Jeff Farkash 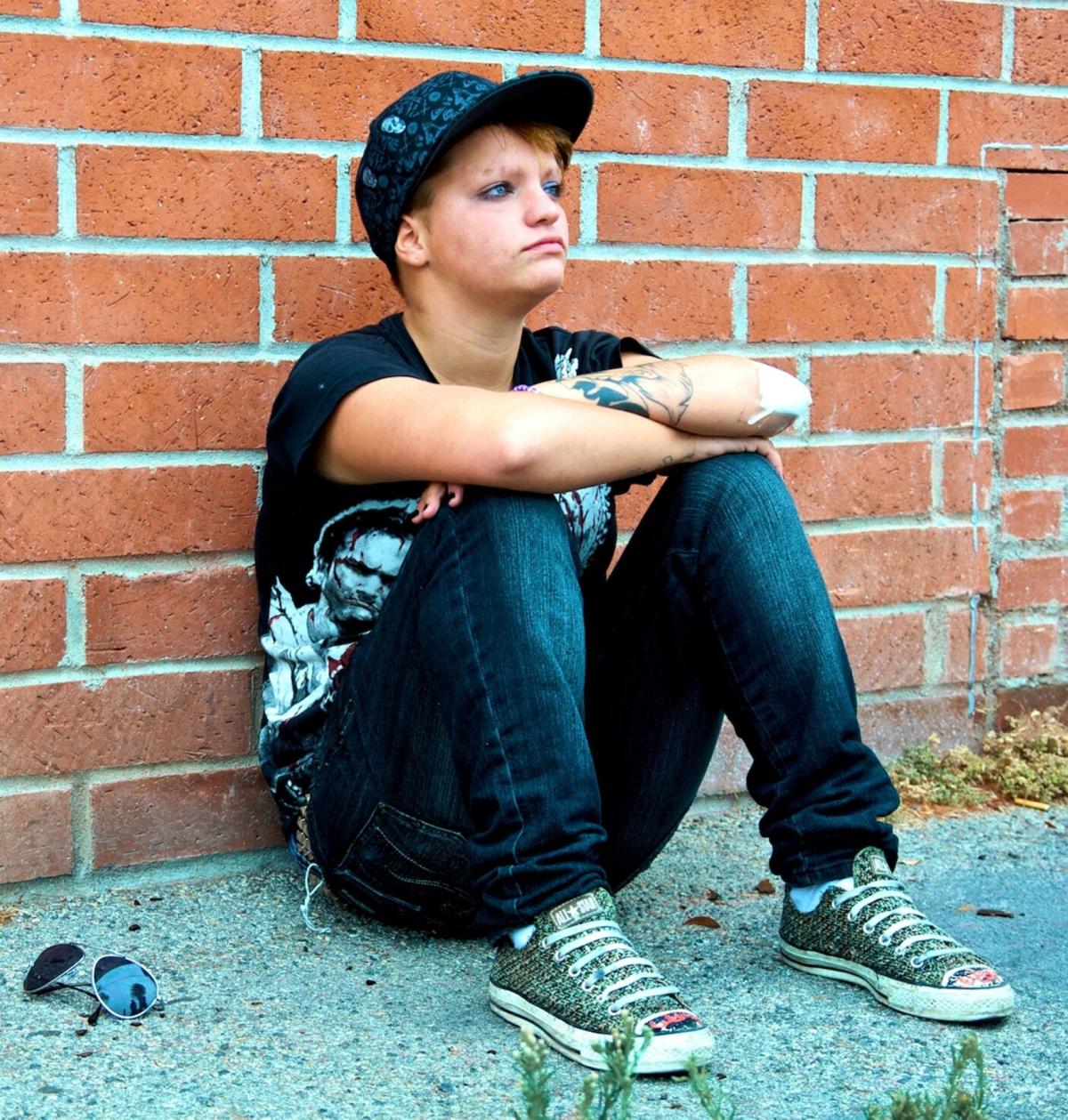 Cheyanne Doolitte, aka Bublez, is interviewed during the filming of “American Street Kid.” Jeff Farkash 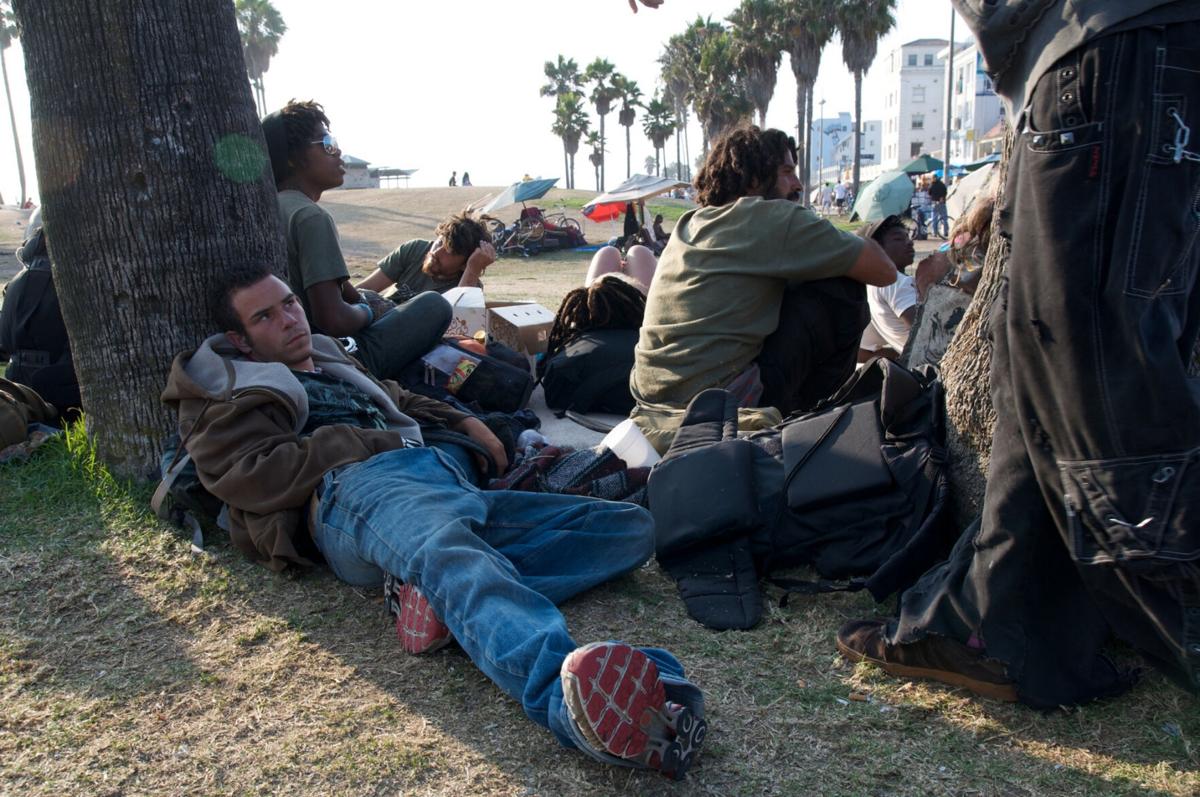 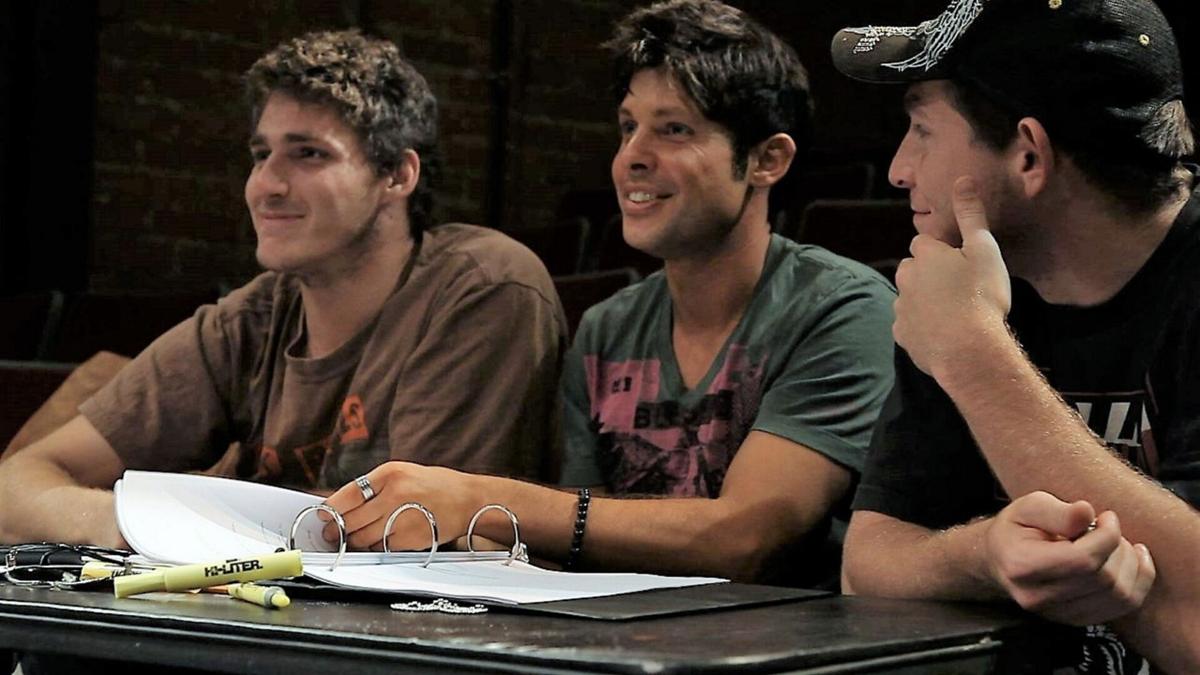 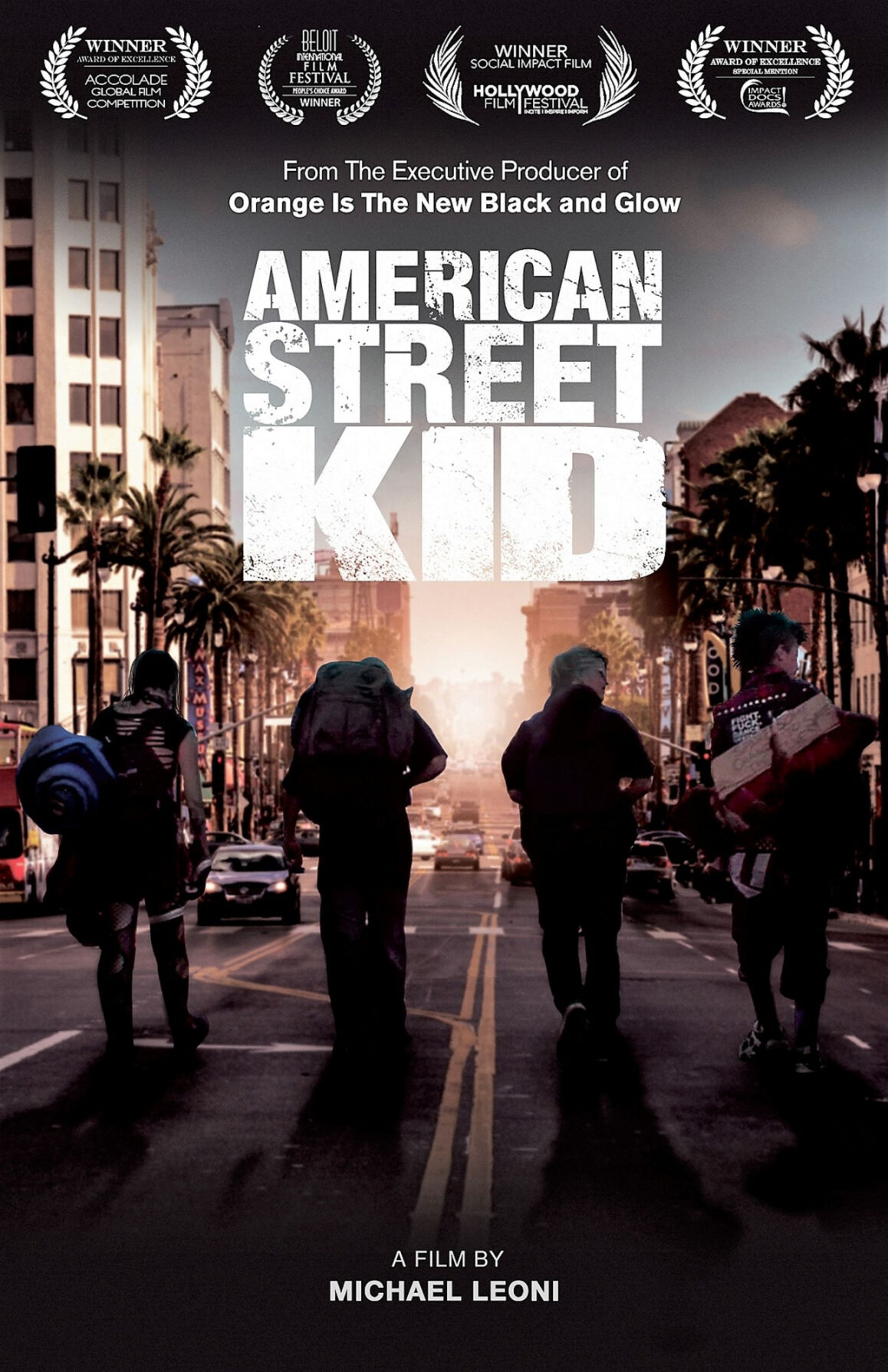 Watertown native Michael Leoni hit the streets of Los Angeles six years ago to do a public service announcement on teen homelessness. It has turned into a documentary, “American Street Kid,” released on major streaming platforms on Saturday. Jeff Farkash

Cheyanne Doolitte, aka Bublez, is interviewed during the filming of “American Street Kid.” Jeff Farkash

When Watertown native Michael J. Leoni hit the streets of Los Angeles six years ago to gather insight into the teen homeless issue of the city where he lives, he expected it to be a short project and to the point.

“I went out on the streets to do a PSA (public service announcement) with some friends and that PSA turned into six years,” Mr. Leoni said in a phone interview from Los Angeles. “I got sucked into that world and realized there was more than two minutes that needed to be addressed.”

Mr. Leoni’s 104-minute documentary “American Street Kid” was released on major streaming platforms on Saturday. It had been steadily gaining buzz leading up to the release date. Toronto native Howard Barish, an Oscar-nominated and Emmy Award-winning producer, director and distributor, eventually signed on to executive produce the film.

“He saw the film and immediately jumped on board,” Mr. Leoni said. “We were looking for the right home and were on hold at many different places. What took so long was that we care so much about the kids and we wanted to make sure it was at the right home that cared about it for the right reason. We felt that Howard had the passion for the kids, not just for the movie, but for the kids. That was the most important thing for our team. He’s like an angel to us.”

“It’s appealing to people all over the world, which is amazing,” Mr. Leoni said. “It’s a human issue. Yes, it’s about homeless kids and yes, it’s about what’s going on out there. But it’s about how we treat each other as human beings and knowing that we’re all family in this world and that these kids aren’t ignored and they’re not invisible. We’re all part of this human family.”

“American Street Kid” follows eight teens – Marquesha Babers “Kiki”, Ryan, Greenz, Bublez, Nick, Ish, Crystal and Mischa — who have been living on the streets since ages 15-16. In order to survive, the kids are forced to sell drugs, beg for money or sell their bodies. They live under bridges, in abandoned houses or anywhere else they can hide to remain safe from the dangers they face daily on the streets.

The trailer for the film previews its stark realities with some of the voices of the teens:

“Two years ago, my mom kicked me out because she couldn’t afford me and the dog.”

“Sometimes you have to dig stuff out of the garbage and eat it.”

“I see people dying and it’s scary, you know, because I’m having to live that life.”

“I interviewed about 300 kids,” Mr. Leoni said. “Some unfortunately are still on the streets. I probably talked to 20 of them regularly and five or six of them are still my best friends, part of my family.”

Mr. Leoni is the son of Kenneth D. and Catherine (Carbone) Leon of Franklin, Mass. The couple has a summer home along Lake Ontario near Sackets Harbor. Michael moved with his parents to the Boston area at the age of 14.

He added an “i” to make his last name match that of his grandfather, Victor E. Leoni, who came to this country from Italy. (Immigration officials dropped the “i” when Victor came here.)

Mr. Leoni caught the directing bug in Watertown as a youth. He directed plays through the YMCA’s School-Aged Child Care program and also was involved in Watertown Little Theatre and Watertown Lyric Theater.

While in Boston, Mr. Leoni directed “Jesus Christ Superstar,” “Hair,” “Falsettos,” and wrote and directed, “Wanted,” “City of Dreams” and “Omerta.” He was then accepted into the Hartt School/Conservatory at the University of Hartford in Connecticut on a talent scholarship. He left Hartt at he age of 19 and moved to New York City, where he began working with homeless youth and was on the verge of becoming homeless himself. In New York City, he later wrote, directed, and produced “Enigma” and “Deviants.” He also directed “This is Our Youth” and the Off‐-Broadway run of “LOUD,” an original rock musical that received several nominations at the New York City Fringe Festival.

He is the founder of An 11:11 Experience, a Los Angeles-based theater and film production company dedicated to creating projects that promote social change. Its first project was the original workshop version of “The Playground,” a music-infused piece inspired by the lives of homeless kids and teenage runaways. It had six successful runs and positive reviews.

“I wanted to make sure I was representing them accurately and I was going to mentor them,” Mr. Leoni said.

But both of the youths died within a year. That was when Mr. Leoni decided to do the PSA, which turned into the new documentary. In it, he reveals the answers to the most crucial questions: How did they get there? And why can’t they get off the streets?

The film is resonating with a wide variety of audiences, Mr. Leoni said.

“What’s connecting people is that we’ve all experienced loss, grief, feelings of abandonment or disappointment in life, and I think that’s what people are connecting to — the hearts of these kids and the passion of these kids and the fact that no matter what their circumstances are, they never feel bad for themselves. They’re in pain, but they strive to do better,” Mr. Leoni said.

A misconception, Mr. Leoni said, is that the homeless teens prefer to be on the streets and it’s a lifestyle choice.

“It’s exactly the opposite,” he said. “They were abused and kicked out of their homes at a young age. They created street families on the streets and that’s how they brought me in. They made me part of their family and that’s how I got access to all the information.”

The director said “American Street Kid” can be difficult to watch at times.

Mr. Leoni recently finished the feature film, “When Today Ends,” which is about teen suicide.

He’s turning his stage show, “Famous” which ran for eight months in Los Angeles, into a film.

“It’s about kids growing up with drug addiction and the paedophilia ring in Hollywood, which is very disturbing,” Mr. Leoni said.

He was asked what draws him to the issues faced by today’s youth.

“I’m drawn to helping kids and helping the situation that they’re in,” he said. “It’s not easy to grow up in this generation with social media and all the disturbing things coming at them and all the access that they have. It starts with the youth, and that’s what I think I’m drawn to — helping the youth be heard and to be seen.”