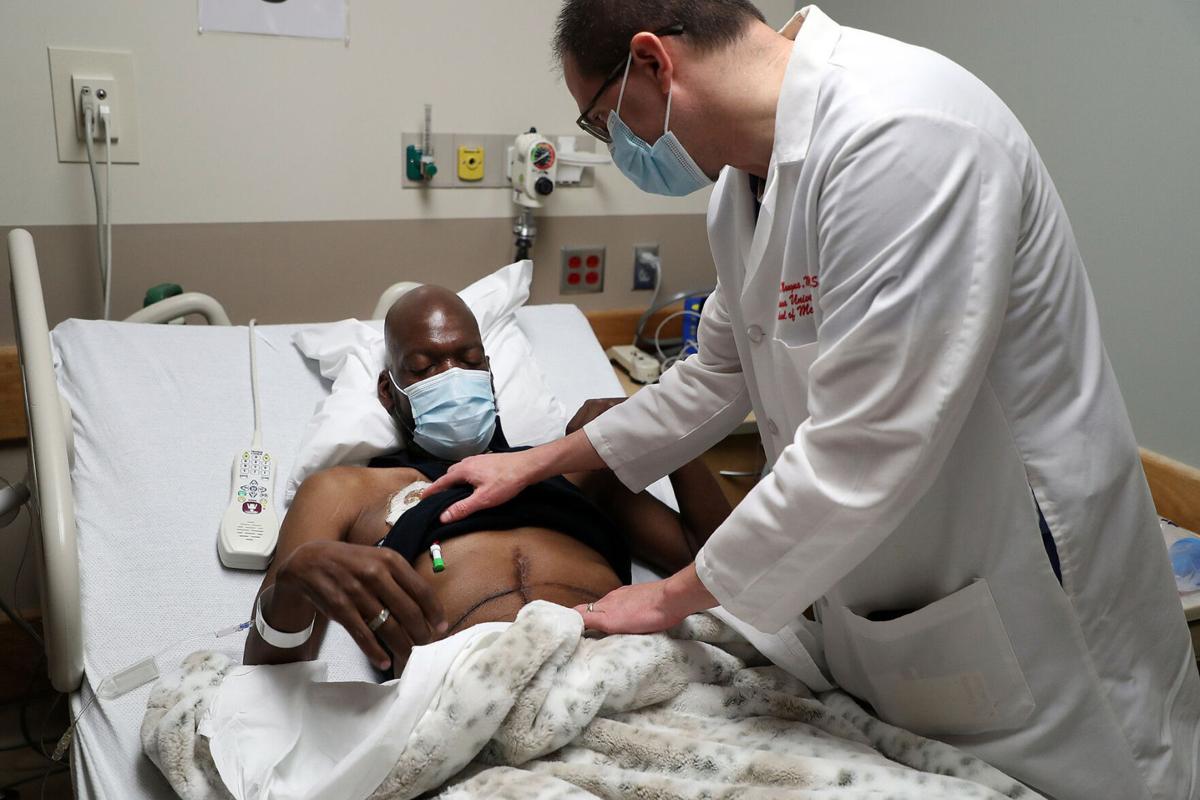 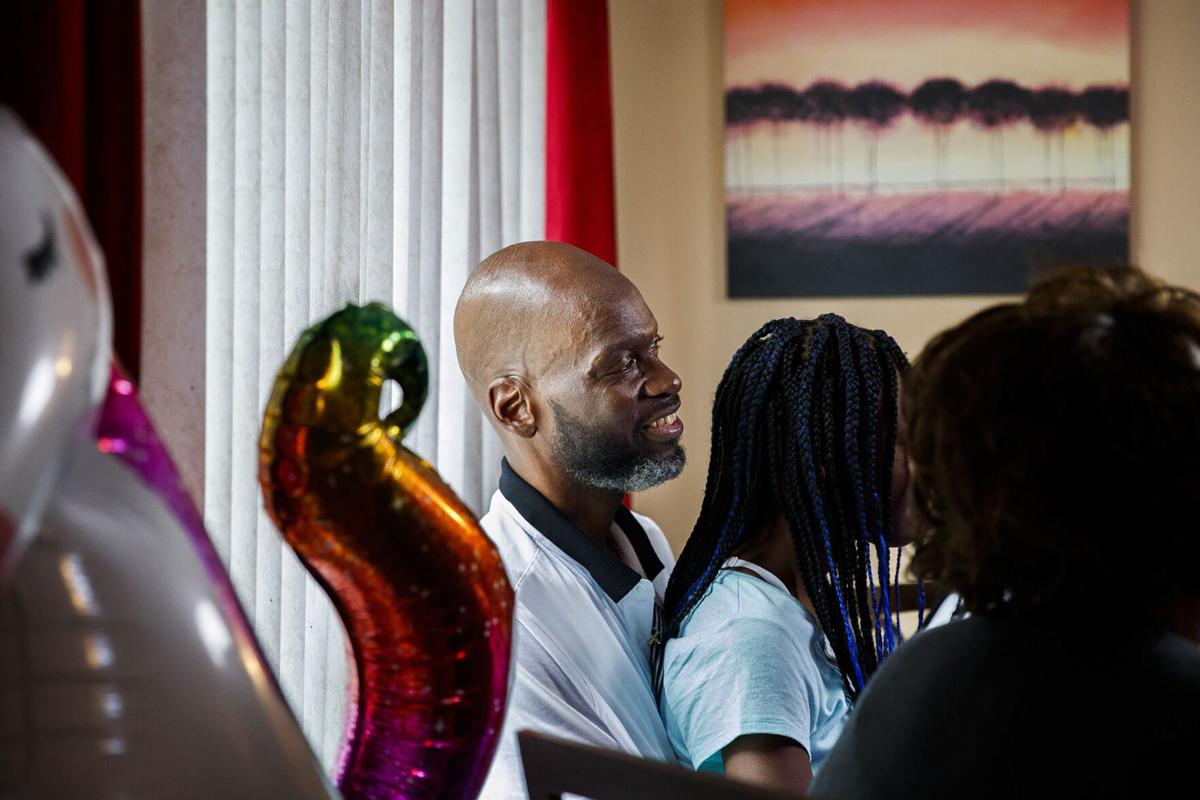 Phillip Hanks, 50, sits with his daughter Aliya Hanks, 13, during her birthday party with family and friends on July 21 in Joliet, Ill. Photos by Armando L. Sanchez/Chicago Tribune/TNS 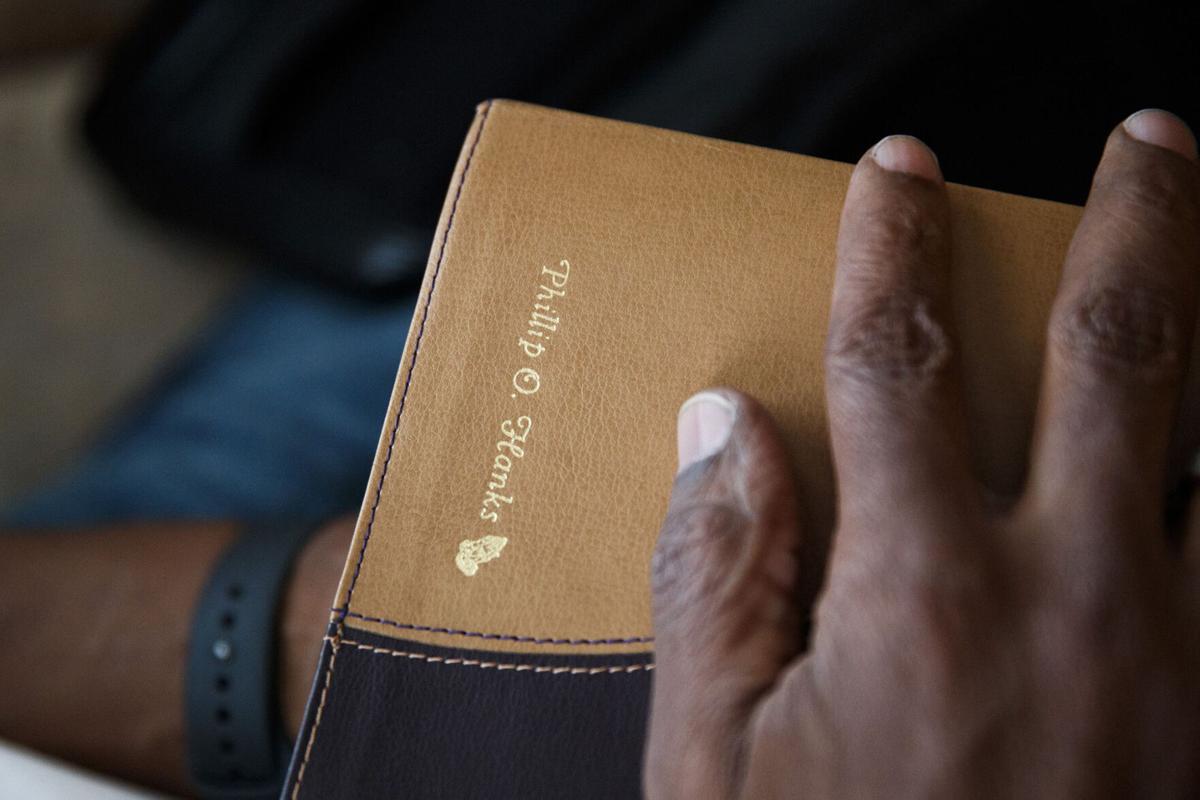 Phillip Hanks, 50, sits with his daughter Aliya Hanks, 13, during her birthday party with family and friends on July 21 in Joliet, Ill. Photos by Armando L. Sanchez/Chicago Tribune/TNS

CHICAGO — Unique, one of a kind — all terms used to describe individuals and their distinctness. But did you know your insides have a doppelganger out there somewhere? For Phillip Hanks of Joliet, Ill., it was that person, someone he had never met, who would save his life.

Hanks, a father of six, received a multivisceral transplant — a simultaneous transplant of multiple organs — at Indiana University Health in Indianapolis in late April. He received a new liver, small and large intestine, stomach, pancreas and kidney.

He laughs when he’s compared to the star of the show “The Six Million Dollar Man.”

“He’s very motivated — not just motivated, but very committed to getting himself better, to making himself as well as possible,” Hanks’ transplant surgeon Dr. Richard Mangus said. “I think he has a lot of things he wants to accomplish in life and he wants to stay healthy to be able to do those things.”

At the age of 50, Hanks has already lived a life worthy of a television movie. Growing up the youngest of four siblings in a single-parent home, Hanks said he had to fight bullies to, from and in school regardless of whether he was growing up in suburban Streamwood or on Chicago’s South Side attending public or Catholic school. Threatened by gangs his senior year of high school, he got his GED, putting college on hold to contribute to the household.

Eventually, he would go into information technology after encouragement from his mother to take electronics courses at Olive Harvey College. Fast forward past a bad first marriage to a meet-cute in a Jewel store where Hanks met his current wife Tiva, a first grade teacher in South Holland. Oh, and the former IT director is still recuperating from his previous transplant.

That’s right, previous transplant. The 2021 multivisceral transplant was a redo.

The first was a liver transplant in 2007 after Hanks developed hepatitis C from what physicians believe was a re-sterilized needle used in one of his two tattoos.

Hanks’ recuperation from the 2007 surgery didn’t go smoothly, according to Tiva Hanks.

The new liver had an extra valve that his old liver did not and when he was in recovery, he began to bleed internally through it. That pushed him into renal failure.

“They put him on dialysis, and he was in an induced coma for about a week. He had all kinds of issues,” Tiva Hanks said.

“They had to massage my heart to keep me going,” Phillip Hanks said. “It took a long time to recover from that one.”

But Hanks bounced back and started living his regular, active lifestyle once again — one of exercise, family and faith. In fact, it was when he came out of the coma that his wife gifted him with the news that they would be having their first child together (the pair have two children each from their first marriages). That child, Aliya Hanks, celebrated her 13th birthday in July.

Life was lived until 2019, when a pickup game of basketball with his son revealed the need for a new liver and a new kidney. During the game, a pain shot down his arm, and up his back. He shrugged it off on the court, but as the day went on, the pain grew stronger. When he got back to the house, he was almost in tears, the pain was so intense, Hanks said.

“Over the course of the three days, I went from taking two 800 milligram ibuprofen, every four hours to popping them like they were candy,” he said.

Hanks went to the hospital and stayed for a month and a half, hoping professionals could find the source of his pain. By the end of his stay, Hanks had a diagnosis of fourth-stage kidney failure, and a need for a new liver. Frustration set in.

“Me taking the ibuprofen — I had diabetes at the time as well, I was diagnosed with that in 2005 — the stress from the diabetes put extra strain on the kidneys and the liver. And that’s the reason why I needed a new liver. The ibuprofen I was taking, over the course of that time, it pushed the kidneys over the edge,” Hanks said.

The couple learned scar tissue from the 2007 transplant surgery completely closed off Hanks’ portal vein (the vessel that drains blood from the gastrointestinal tract and spleen to the liver). Medical professionals, unable to reopen the vein, referred him to transplant centers in Indiana and Nebraska; the Hankses chose the former with IU Health.

“We do around 550 a year total transplants; it’s a busy center,” Mangus said.

“They explained that a multivisceral organ transplant would be the best step for him,” Tiva Hanks said. “They’d replace everything, so you don’t have to worry about the portal vein.”

Having made it through the first liver transplant, Hanks relied on his faith to push through this most recent transplant. Even Mangus had to contemplate whether he would be willing to perform the surgery. He said there are about 50 of these types of multivisceral transplants done in the country every year out of 300 million people.

“It’s pretty risky to do a redo liver transplant,” Mangus said. “Most of those patients, if they needed a re-transplant, they would be too sick, too frail, and they just wouldn’t be a candidate for it and they’re allowed to die. Only about 4 percent of all liver transplants are in people who’ve had a previous one. The 4 percent are the ones who are still healthy and strong enough that we think they can make it through a redo transplant; it’s not very many.”

Mangus said he was swayed to do the transplant after seeing Hanks’ physical health, support system and attitude.

“You need that positive attitude; you need a lot of energy,” Mangus said. “Some of these patients after a multivisceral are here for three, four or five months in the hospital trying to recover. So many things can come up and be setbacks that you have to have people that are really committed to, ‘I’m going to fight and I’m going to survive.’”

Mangus gave him a 50% chance that the transplant would be successful and a 50% chance that it wouldn’t be, and all of this was during a pandemic. Two days after his 50th birthday, he got the call that a donor was found. The first surgery was April 26, when the intestine, stomach, liver and pancreas were placed over the course of 71/2 hours, Hanks’ wife said. During the second operation, the following day, Mangus placed the kidney in 41/2 hours.

Within an hour and a half after waking up from the second surgery, Hanks was sitting up and asking to walk the hospital floors. Nurses and doctors were in awe at the speed of his recuperation. When physicians were saying can’t, Hanks was saying can. Something his late mother had instilled in him.

“I was taught when someone tells you that you can’t do something, prove them wrong,” Hanks said. “Dr. Mangus doesn’t want me doing anything to put strain on my abdomen, because he had to sew scar tissue to scar tissue and it will be real easy to pull it apart. I see him every Friday, asking: Can I do this now? Is it OK to do this? He’s like ‘slow down, take time to recuperate.’ My wife and family keep telling me the same thing.”

Restricted from heavy lifting, Hanks is currently trying to put the weight back onto his 6-foot-3-inch frame that he lost during his illness. In the meantime, he’s moving forward with the goal of helping others. He wants people to glean inspiration and faith from his story.

“I think attitude and frame of mind has a lot to do with recovery. ... The mind is a powerful tool,” Hanks said. “I try my best to stay positive because if you get negative, you can get defeated.”

Hanks is taking chaplain classes online in hopes of taking his message of positivity to as many platforms as possible — public speaking, a possible documentary or a book. He’s also open to being on posters for organ donation.

“I’m very sorry for the loss of the family of the person I got the organs from, but one loss of life saved another life,” Hanks said. “Speaking on that platform, speaking on a faith platform to people out there with negative attitudes and the ‘can’t dos’ ... that’s on my brain. I’m just a passenger in this; God was driving. That’s why I’m looking into ministry.”

Hanks is doing clinical hours with a 24-hour Christian hotline and chat room. He’s been asked to speak to other individuals who are having a hard time after transplant surgery. He’s also talking to a couple from Kentucky referred to IU Health for their transplant needs. Hanks and his wife said a lot of people have never heard of a multivisceral transplant.

“We never knew this was possible,” Tiva Hanks said. “If we can share this information with people so they know that there are options, then we’ve done something. This is not something that happens all the time. We just kept going until we didn’t get a ‘no’ because we didn’t have a choice.”

Mangus agrees, saying most patients come to his institution through a Google search, instead of a referrals from major transplant centers.

“I’ve personally taken many patients out of hospice and said, ‘We can do something to fix this,’” Mangus said. “Phillip quite honestly is one of those types of patients ... most people would have just gone home and said ‘OK, that was it.’ You have these individuals at home on their computer trying to figure out how to stay alive.”

“There’s nothing about this situation that is normal or OK, but it could happen,” Tiva Hanks said. “When I watch him, I think he’s a walking miracle. If you don’t believe in God, I’m looking at it right now. I witnessed both his surgeries, and his health and my faith is stronger than ever.”