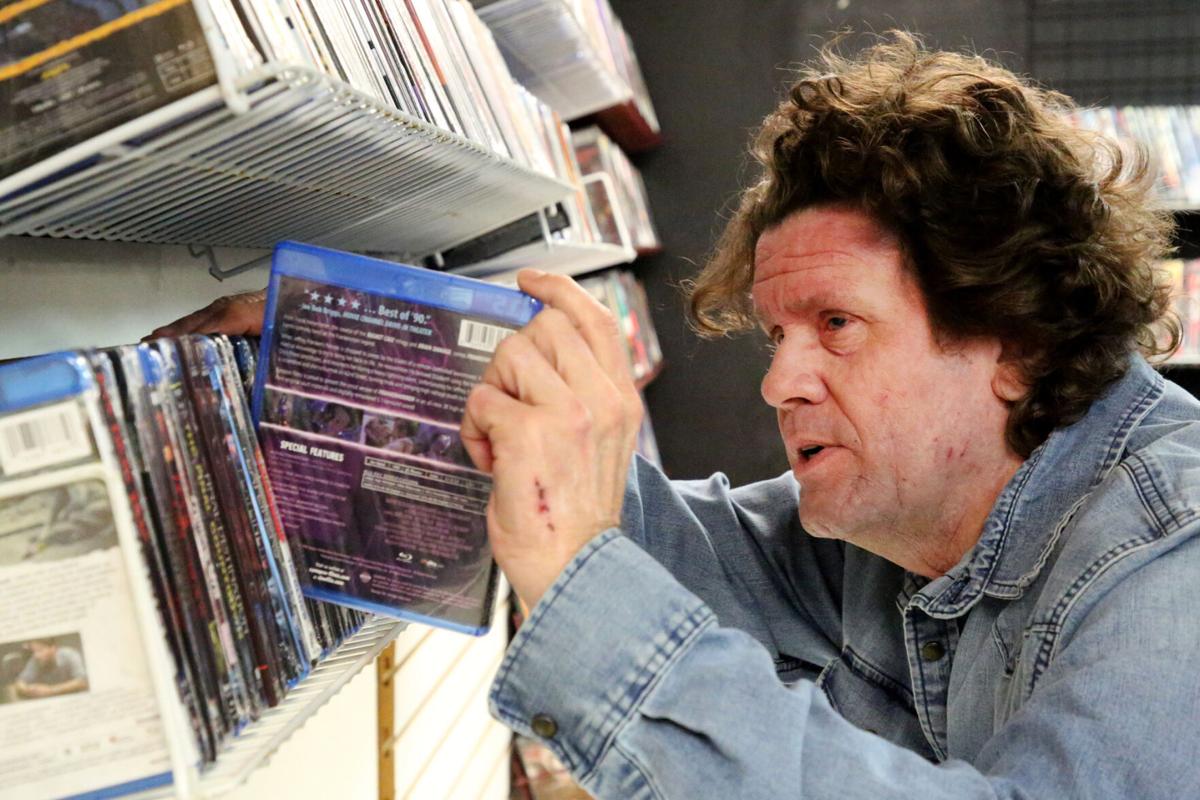 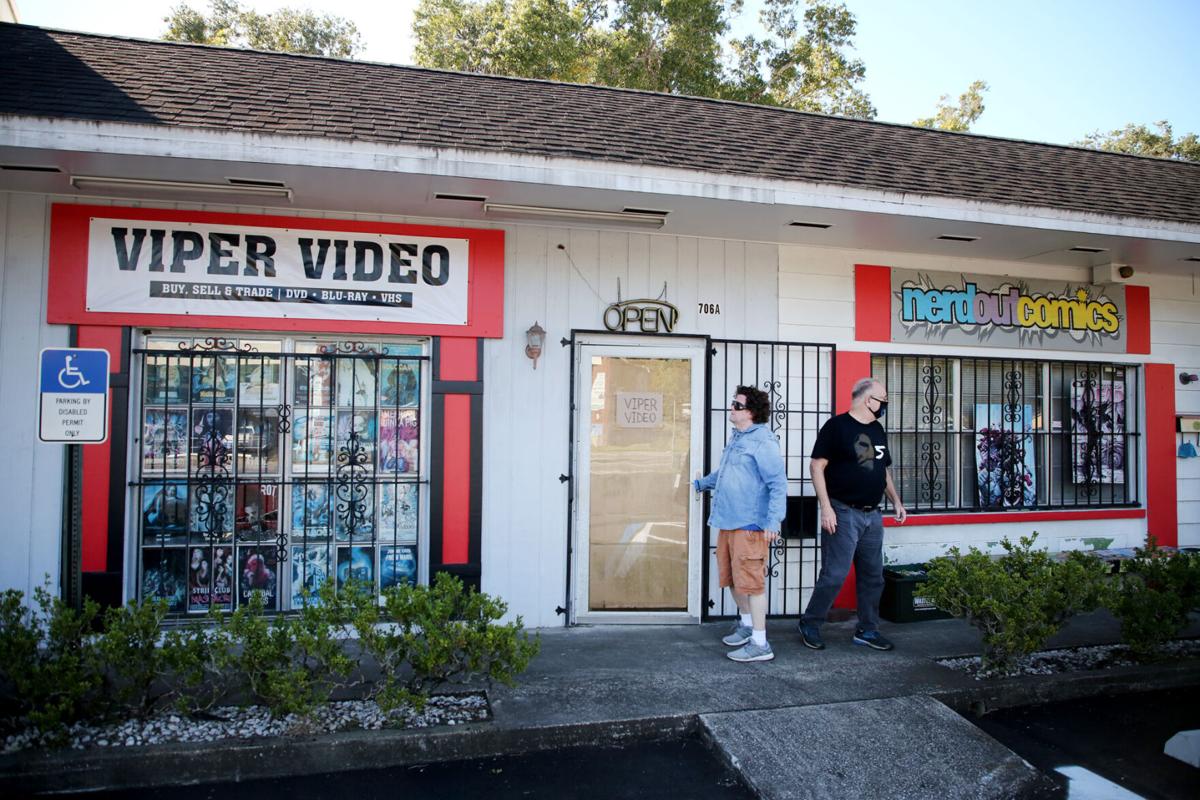 “Yeah, I know it’s 2021 and not 1981,” McIntyre said with a laugh. “My family and friends have been asking me that for weeks. They think I’m crazy to open a video store when everyone has moved to streaming.”

He must zoom his computer screen to 400 percent when doing inventory and use a digital magnifying glass to read DVD cases.

It carries original VHS tapes, but McIntyre expects customers to primarily come for the re-releases of classics via 4K Blu-ray box sets, some of which include deleted scenes, director’s commentary and a book detailing the production.

The store has such box sets for the original Dune, The Shining, Children of the Corn and He Came from the Swamp.

Viper Video is also independent film friendly. Local filmmakers can drop off DVDs and cut a deal with McIntyre.

An hour before opening the store for the first time, Tampa filmmaker Joel Wynkoop, known as king of the B-movies for having nearly 200 low budget film credits, started a “Joel Wynkoop Section.”

“Let’s be honest, this is not the type of store for the guy who watches Fast & Furious,” McIntyre said. “This is a place for hardcore collectors who still want a movie they can hold and pick up and put on display. They want beautifully crafted box sets of classics restored in 4K with extra features.”

There are other Tampa stores that sell videos. Chains like Walmart have bins. Sound Exchange sells used DVDs.

But McIntyre thinks Viper Video is Tampa’s only true video store, excluding those that focus on adult films.

His business model has worked before at the same location.

Viper Video took over the storefront previously used by Grindhouse Video, which carried the same sort of inventory.

Grindhouse Video suspended brick and mortar operations at the start of the pandemic and focused on internet sales.

Then, around six months ago, McIntyre said, owner Mike Sandlin announced the store was permanently closed and he was moving to Knoxville, Tenn.

“When he opened Grindhouse seven years ago, I was kicking myself for not coming up with the idea first,” McIntyre said. “It was a brilliant idea. So, when he said he was moving, I said I want to fill that void. Mike was supportive. He didn’t want to leave his customers without an option. A lot of this inventory came from him.”

McIntyre even hired one of Sandlin’s longtime employees, Jude Butera.

For McIntyre, the store keeps him in the film industry that he loves.

He is an independent film producer whose credits include the “Strip Club King: The Story of Joe Redner” documentary. He was also a special effects makeup artist specializing in horror films.

Seven years ago, he was diagnosed with keratoconus, an eye disease that thins the cornea. It does not cause total blindness, but vision can become so impaired that the person is legally blind. There are treatments, but McIntyre said none have worked for him.

Vision is “fully blurry” in his right eye, he said, and the left eye is “getting there too. At some point, I’ll need a full cornea transplant. Hopefully, that does it.”

He has not worked a makeup effects job since 2016.

He still produces movies, but rarely visits the set.

“I don’t want to be that guy bumping into things,” McIntyre said.

For a few years, he filled the movie void as a talent agent for Benz Model & Talent Agency, but eventually gave up that too.

“My eyes,” he said when asked why. “Even this store is not possible without a lot of help from my family and friends.”

His first customer, Kyle Brady, strolled in seconds after the store officially opened at 11 a.m.

Brady was a regular at Grindhouse Video and worried he’d struggle to add to his collection of more than 4,000 videos without a local store.

“Streaming is not the same as owning a physical copy,” Brady said. “I’m a collector. Thank God this place opened.”

As Brady walked past a shelf with television series box sets — “Magnum P.I.,” “Beavis and Butt-Head,” “Aqua Teen Hunger Force” — he chatted with Butera about favorites.

“‘Frankenhooker’ is a classic,” Butera said.

Released in 1990, the movie is a horror comedy about a mad scientist who creates super crack that causes users to explode. He then gives it to prostitutes so he can use their body parts to rebuild his dead girlfriend.

“This is why we need this place,” McIntyre said. “It’s not just a store. It’s a place to hang out and talk about movies.”

He then pulled a “Frankenhooker” DVD from the shelf without the use of his digital magnifying glass.

“Found it easily,” he said, rubbing his eyes. “You’ll never hear me feel sorry for myself. I have the will. I’ll find a way.”