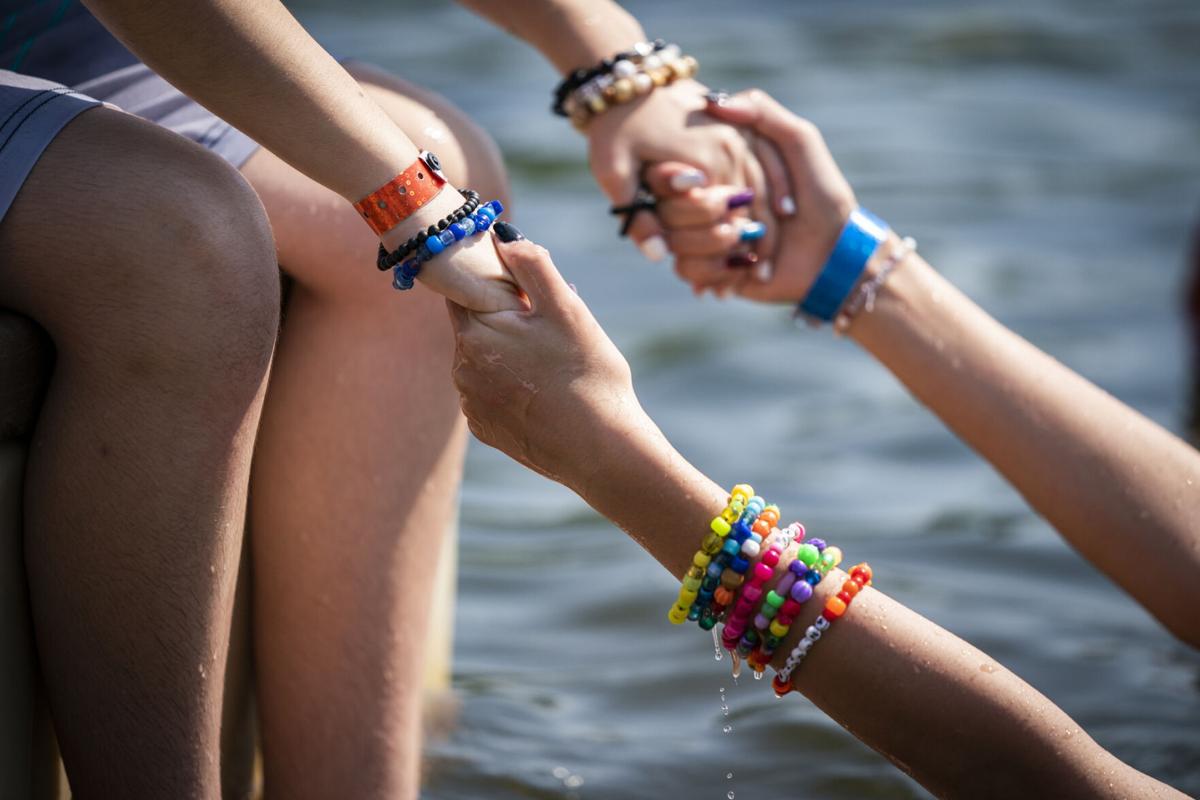 Oliver MacKinze, left, 13, of Florida, who uses he/him pronouns, and Russo Capel, 13, of Plymouth, Minn., who identifies as gender fluid, play in the lake together during Camp True Colors on July 26 in Willow River, Minn. Leila Navidi/Minneapolis Star Tribune/TNS 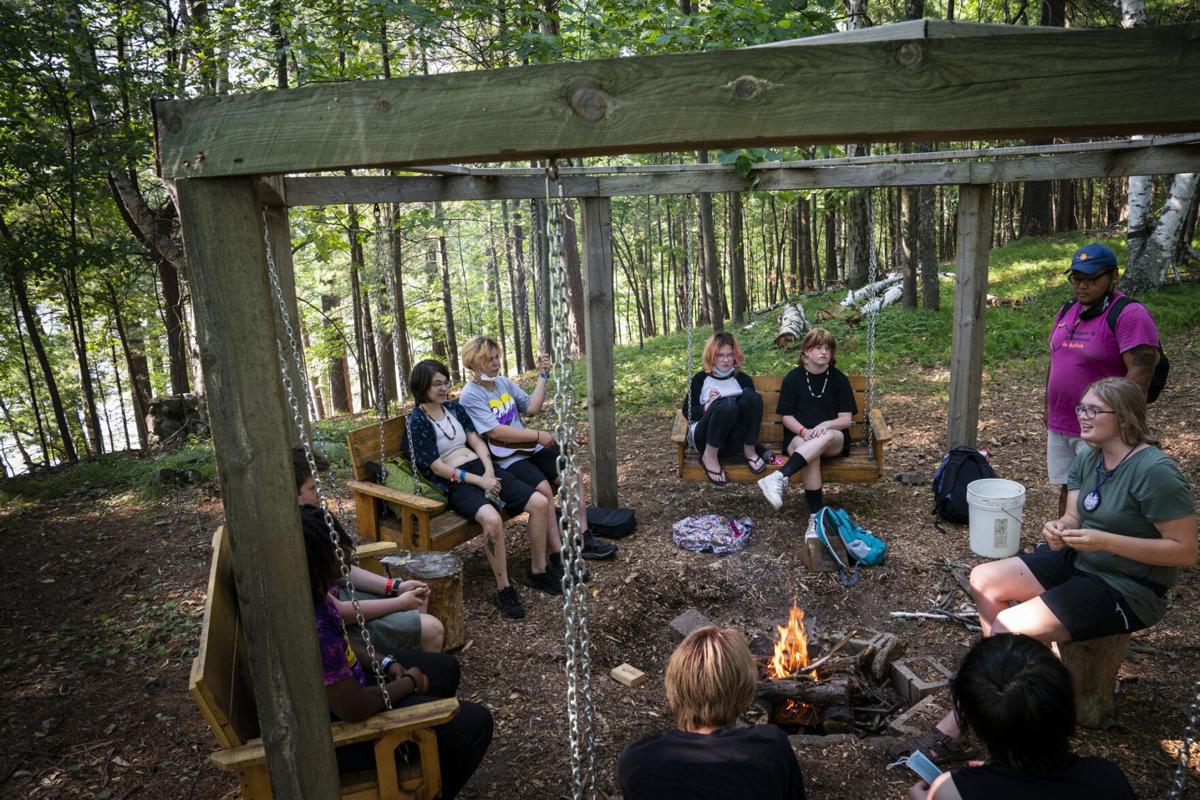 Cabin No. 2 offers some camaraderie by the fire during a cook-out dinner at Camp True Colors on July 26 in Willow River, Minn. Leila Navidi/Minneapolis Star Tribune/TNS 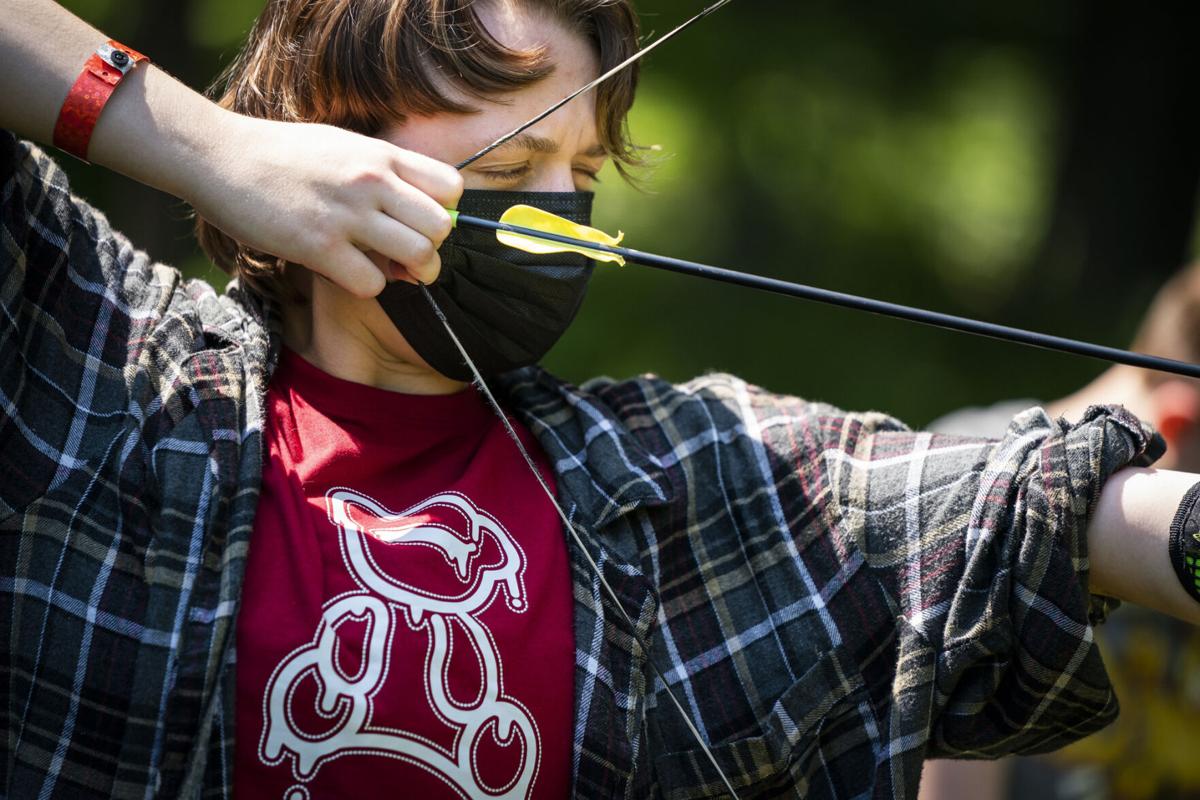 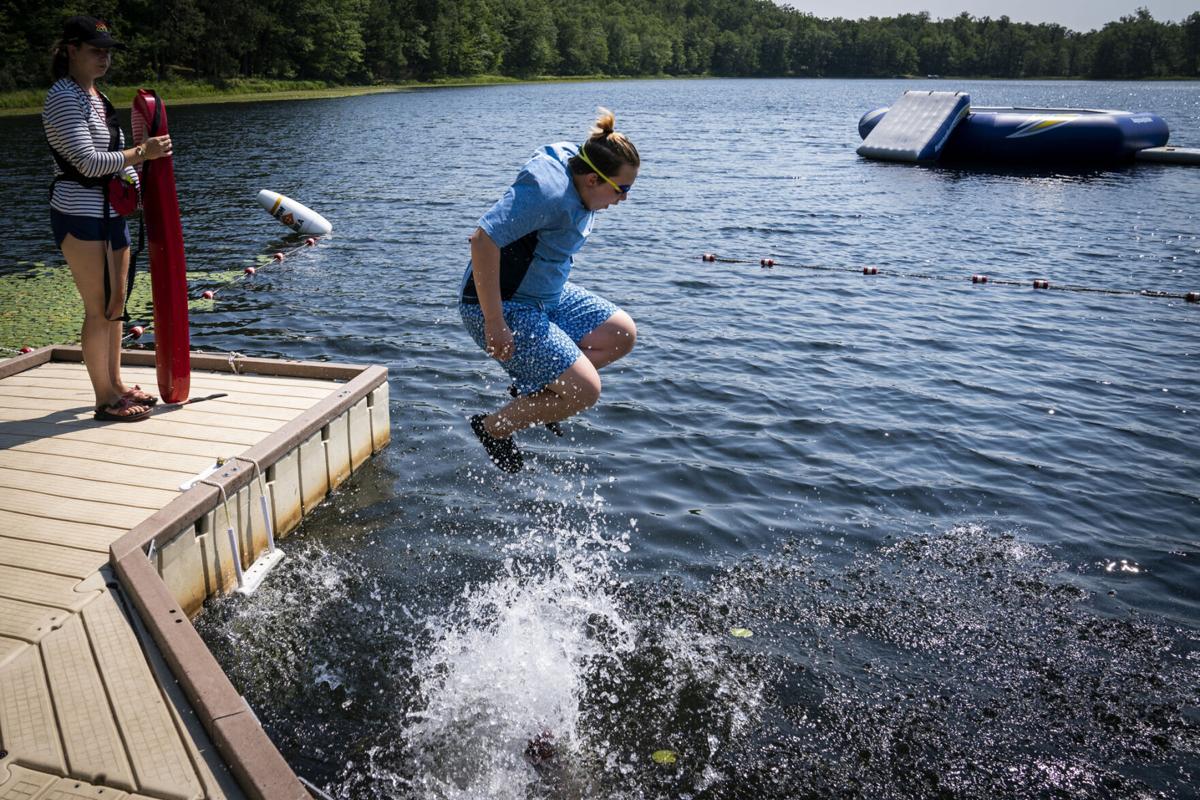 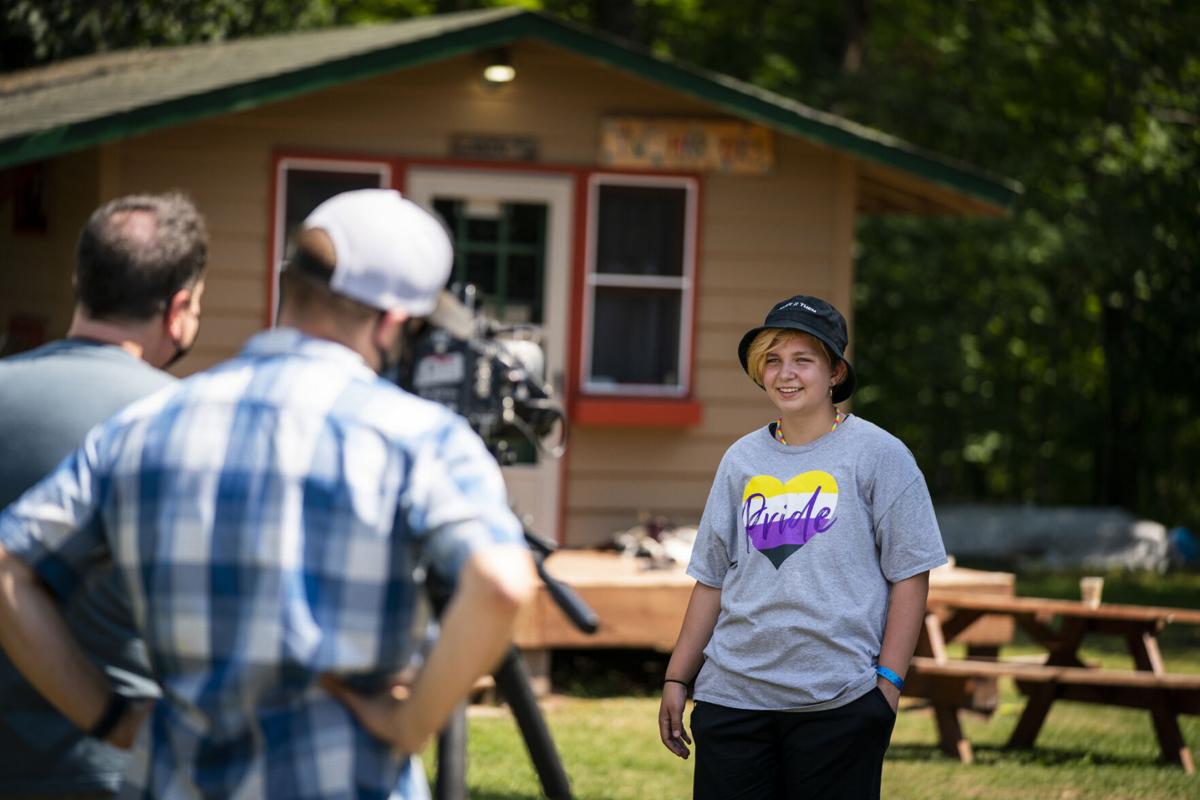 Oliver MacKinze, left, 13, of Florida, who uses he/him pronouns, and Russo Capel, 13, of Plymouth, Minn., who identifies as gender fluid, play in the lake together during Camp True Colors on July 26 in Willow River, Minn. Leila Navidi/Minneapolis Star Tribune/TNS

Cabin No. 2 offers some camaraderie by the fire during a cook-out dinner at Camp True Colors on July 26 in Willow River, Minn. Leila Navidi/Minneapolis Star Tribune/TNS

MINNEAPOLIS — Camp True Colors, at a woodsy, lakeside retreat just north of Hinckley, Minn., is summer camp with all the trappings.

There’s canoeing and archery and tie-dyeing and a giant water trampoline. There are bunks in the cabins and cookouts over campfires — and, some believe, a friendly ghost inhabiting the bathroom, who campers contact via a homemade Ouija board.

There is also an abundance of rainbows: on socks and masks and shirts. And painted on the wooden name tags campers wear to share their pronouns.

Attendees describe Camp True Colors in otherworldly terms, as if they’ve found the proverbial end of the rainbow: “like heaven on Earth” and “like a paradise.”

Evan McNiff, 16, a veteran camper attending his fifth session, keeps coming back to his “happy place,” he said, “because life is really hard sometimes — especially being a queer kid.”

Camp True Colors, run by the Minnesota-based nonprofit One Heartland, is one of the country’s few camps for LGBTQ+ youth.

Camper Syd Anderson, 14, of Edina, played a ukulele before dinner.

In a world that can often be misunderstanding of, if not outright hostile to, people of diverse sexual orientation and gender identities, campers say True Colors makes them feel not just accepted, but celebrated for who they are.

Though public support for LGBTQ+ issues has increased in recent decades, social biases still contribute to higher rates of depression, anxiety, and suicide among LGBTQ+ youth. Feeling like you always have to tiptoe around or explain your identity, or being bullied or dismissed by those who won’t accept you, can take a toll on mental health.

By contrast, being around people “who get me,” as McNiff put it, “takes all the weight off — at least for a week.”

During the past three decades, One Heartland has hosted some 20,000 campers dealing with a range of health and social challenges.

The organization began as Camp Heartland, in 1993, to give kids with HIV/AIDS a respite from the worries and discrimination they faced.

When he was 22, founder Neil Willenson knew a 7-year-old boy who was HIV-positive. Willenson raised money to rent a summer camp near Milwaukee for a week to host his young friend and youth like him.

Camp Heartland was a rare haven in an era when kids with HIV/AIDS received death threats after joining sports teams. Two brothers who attended that first camp session had seen their home burned by arson following their successful lawsuit to attend public school.

Willenson thought Camp Heartland would be a one-time event. But when a very ill camper, who had spent more time in the infirmary than attending activities, called the experience “the best week of my life,” Willenson knew he needed to keep it going.

A few years later, when Paul Molitor, the former Twins player and manager, was negotiating a new contract, he suggested that owner Carl Pohlad close the gap with a $250,000 donation to Camp Heartland. Those funds helped Willenson purchase the camp’s permanent home.

In 2006, the organization changed its name to One Heartland to reflect how its programs had expanded to reach other children facing significant health challenges or social isolation, including those struggling with housing instability or weight issues.

In recent years, demographic changes and funding declines have caused some of those sessions to be reduced or phased out. But Camp True Colors has been growing. (It takes its name from the song made famous by pop star Cyndi Lauper, who is a major funder.)

After canceling 2020’s programs because of COVID, One Heartland offered four weeks of True Colors sessions this summer, which attracted campers from as far away as Alaska and Hawaii. Due to long wait lists, True Colors will expand to six weeks for summer 2022. (Registration begins Dec. 1.)

One of this summer’s sessions was offered specifically for youth who are transgender, nonbinary or otherwise gender-expansive — a rarity even among other LGBTQ+-focused camps.

This made it especially popular among campers, and, not unexpectedly, a target for transphobic comments, said Patrick Kindler, who has served as One Heartland’s executive director since 2011. But he said the organization has been proud to pioneer camp opportunities for the transgender population, just as it has with other stigmatized groups.

“We were one of the first and we didn’t blink,” Kindler said. “We didn’t worry about this, that or the other. We knew it was needed and we started it.”

During a late July session of Camp True Colors, for ages 13-17, Syd Anderson, 14, of Edina, wore a black bucket hat displaying the words “they/them,” to share their pronouns.

The hat was a Christmas gift from their parents, who have been very supportive, Anderson said. Initially, Anderson came out as gay the summer before seventh grade, and, soon after, verbalized thoughts about also maybe being transgender.

“My parents were like, ‘Cool, just like, tell us your pronouns and we’ll do our best,’” they said. “It was never really a big deal.”

Anderson is a member of their school’s gay-straight alliance, but it only has a few members and none are trans. “I don’t really get to see a lot of trans people, especially that are my age, so coming here has been awesome,” Anderson said.

Being at camp has helped Anderson feel less alone and less pressure from others.

“If I’m like, ‘OK, if I’m nonbinary and I like girls, what does that make me? I have no idea?’ People will be like, ‘It’s fine to not know, you’ll figure it out,’” said Anderson. “There can be a lot of pressure about giving yourself a label and knowing what you are.”

Programming at One Heartland’s camps includes educational discussions on topics such as healthy relationships, leadership and life skills. Some are tailored to specific camps. True Colors includes discussions on LGBTQ+ history and intersexuality.

It also provides an opportunity to experiment with self-presentation. Anderson mentioned another trans, non-gender-conforming cabinmate who had never worn a binder (a tightfitting garment to flatten the chest) before and was able to try on another camper’s spare.

“I remember when I first put on a binder and how great I felt and then seeing someone else have that feeling was really, really cool,” Anderson said.

Anderson also debuted a new first name at camp. Another cabinmate decided to switch to a new set of pronouns a few days in and the group quickly adjusted — a change that likely would have occurred less fluidly among peers with more rigid ideas about gender.

A typical afternoon at Camp True Colors looks like teens being teens: splashing around in the lake, cracking corny jokes, or doing one another’s makeup. But doing those ordinary activities within this special community has a much deeper impact.

Experiences that affirm the identities of LGBTQ+ youth, such as True Colors, can positively impact mental health — and save lives among those at increased risk of self-harm.

A 2020 national survey of LGBTQ+ youth by the Trevor Project, a nonprofit focused on suicide prevention among this group, found that lower rates of suicide attempts were reported by respondents who said their pronouns were consistently respected, that they had access to gender-affirming clothing and to supportive people and affirming spaces.

To be more accepting of LGBTQ+ people, camper Anderson suggested people consciously use more gender-neutral language. For example, Anderson asked their softball coach to address the team as “players” instead of “girls.”

Rather than assuming a person’s pronouns, asking their preference is really not as weird or embarrassing as you might think, Anderson added.

“Being like, ‘Hey, what are your pronouns?’ will make a lot of people way more comfortable.”

C.J. Schlotthauer, 17, who arrived at True Colors from Rochester, Minn., by way of googling “inclusive summer camp,” recently started experimenting with using gender-neutral pronouns. Introducing the terms xe/xem (an alternative to they/them) a few weeks before camp didn’t go so well, due to a lack of familiarity.

“Mom and Dad tried to use them in public once and people were very confused, so Mom and Dad kind of stopped using them,” Schlotthauer explained. “But here, people have been using my right pronouns, and it just makes me so happy.”

Schlotthauer said that True Colors has been a fertile ground for forming friendships — a sentiment many other campers express.

Executive director Kindler noted that follow-up evaluations have shown 80% of attendees say they regularly connect with other former campers.

“A big piece of this is for our campers to meet other kids dealing with the same things they are, so they have a support network,” Kindler said.