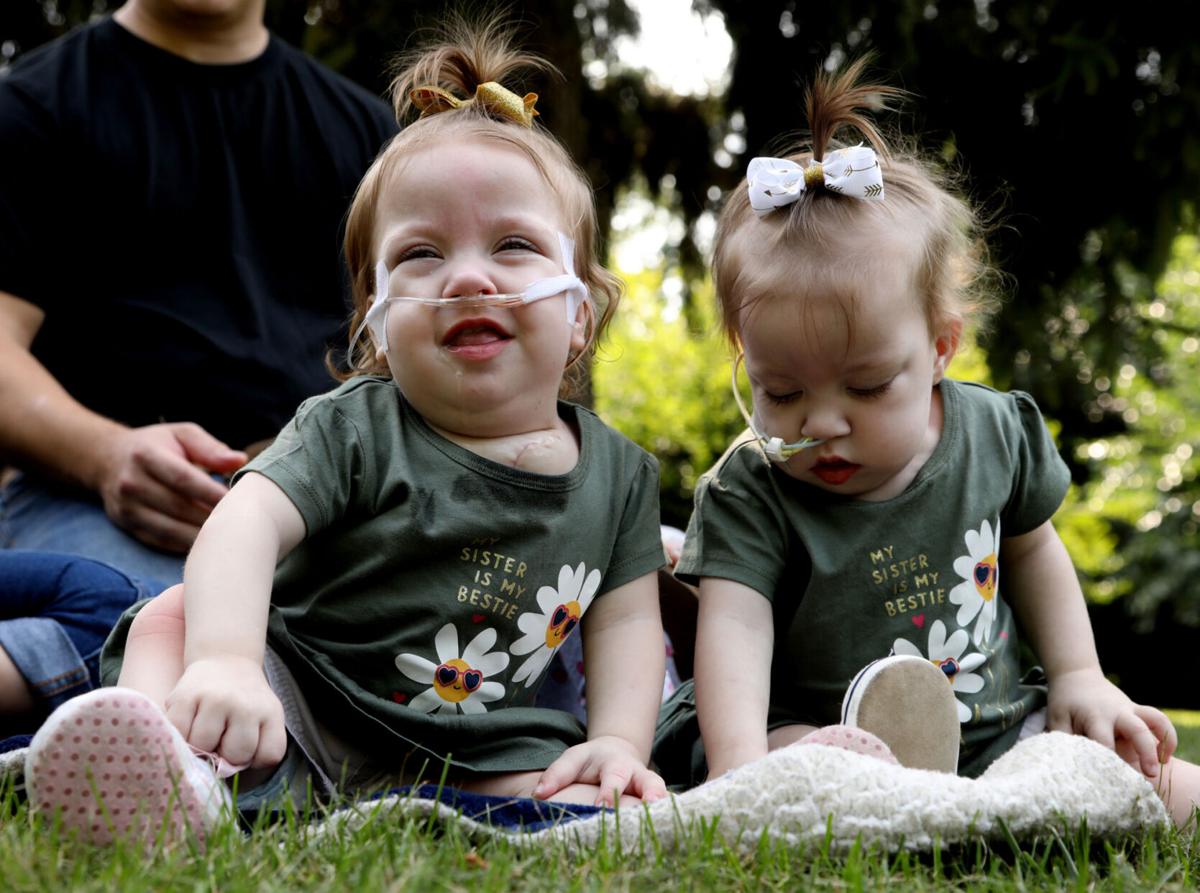 The 15-month-old Irwin twins, Amelia and Sarabeth Irwin, at their Petersburg, Mich., home on Sept. 12. The twins were born conjoined at the chest in 2019. This past July, during a 10-hour surgery at C.S. Mott Children’s Hospital in Ann Arbor, their liver was divided, their chest reconstructed and each had belly buttons made. Eric Seals/Detroit Free Press 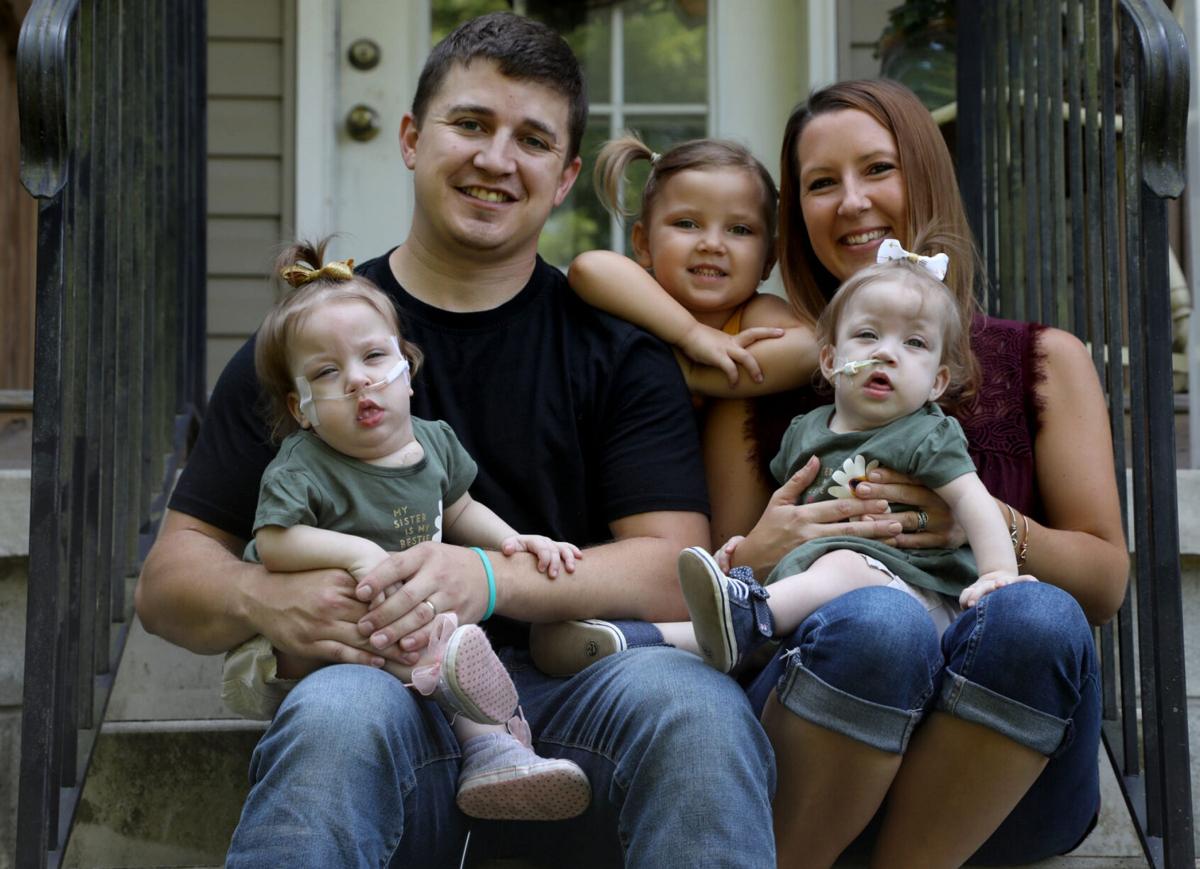 The 15-month-old Irwin twins, Amelia and Sarabeth Irwin, at their Petersburg, Mich., home on Sept. 12. The twins were born conjoined at the chest in 2019. This past July, during a 10-hour surgery at C.S. Mott Children’s Hospital in Ann Arbor, their liver was divided, their chest reconstructed and each had belly buttons made. Eric Seals/Detroit Free Press

About 14 months later, the twins returned to Ann Arbor, where they underwent an 11-hour surgery Aug. 5 at C.S. Mott Children’s Hospital, becoming the first known set of conjoined twins to be successfully separated in Michigan.

“‘They’re so rare,” said Treadwell, explaining that just 1 in 100,000 to 1 in 250,000 pregnancies involve conjoined twins. Few survive delivery, and even fewer live long enough to be discharged from the hospital and go home, like Sarabeth and Amelia did.

Two teams of surgeons — one for each girl — and more than a dozen other medical staff spent months planning how they’d safely separate Sarabeth and Amelia, giving them a chance at independent lives.

Just a few weeks after the first-of-its-kind surgery, Sarabeth sucked on a pacifier, leaning against her father’s leg on a blanket in the grass outside their house in Petersburg, about 10 miles north of the Ohio state line in Monroe County.

Amelia spotted a cell phone on the ground and began to crawl for it. She looked up at her big sister, Kennedy, who was running across the lawn, and said, “Sissy.”

“Other than taking our word for it, you would almost never know that they were conjoined,” said their father, Phil Irwin on a warm mid-September day.

But neither Alyson nor Phil could ever have dreamed they’d be able to say that about their twins when they fist discovered they were conjoined in late February 2019.

Although the plan was to perform a cesarean section to deliver the twins between 35 and 36 weeks gestation, Treadwell said the babies were showing signs of distress at 34 weeks.

Amelia and Sarabeth shared an umbilical cord, which Treadwell said, had “a lot of different blood vessels in it, more than what you normally would see. We started noticing that some of the blood flow was no longer normal in the umbilical cord. And that’s why we decided to move the delivery up a little bit from what we initially planned.”

A 3-D model of the twins was made to simulate the delivery, and a team of doctors nurses and other medical staff was assembled.

“As you can imagine there’s challenges with taking care of two babies that are attached. Where do you put IVs? And how do you help them breathe if they need help breathing? Those kinds of things,” Treadwell said.

The models allowed Treadwell and her team to accurately estimate how big the incision in Alyson’s abdomen would have to be to safely pull the twins from the womb.

“This is not an ordinary C-section because with an ordinary C-section, you just have to make an incision big enough to deliver one at a time,” she said. “This surgery would require making an incision not only in her abdomen, but also in her uterus, that can accommodate the delivery of two kids simultaneously without pulling on those shared organs or causing any kind of disruption to them.”

Mychaliska said the medical team planned for every possible outcome.

“We practiced what resuscitation would be like right after they were delivered,” he said. “We had to figure out a process for monitoring two separate patients that were conjoined and have electronic medical records that had to capture two separate babies.

June 11, 2019, dawned, and the Irwins made a 45-minute drive to Ann Arbor to finally meet their baby girls, knowing that as many as 60 percent of conjoined twins don’t survive delivery, and even fewer live long enough to be discharged from the hospital.

Amelia and Sarabeth defied those odds.

“I remember them briefly putting the girls on my chest. It was very sweet and special being able to hold them and see them for the first time,” Alyson said. “It was just very surreal. There was so much adrenaline from everything that led up to that point.”

The girls weighed a healthy 9 pounds, 4.5 ounces together — more than 41/2 pounds apiece.

“They were both vigorous when they came out,” Treadwell said. “What I remember is the joy of seeing them, and the fact that they both looked good.

Although the outlook was exceptionally good given the odds, being born prematurely and as conjoined twins, Sarabeth and Amelia remained hospitalized for 85 days.

SOME GOOD NEWS, AT LAST

Sarabeth and Amelia shared a chest wall, but each twin had her own diaphragm muscles, said Mychaliska, who also is the co-director of the Fetal Diagnosis and Treatment Center and the Dr. Robert Bartlett collegiate professor of pediatric surgery at U-M.

They had one small, shared sternum bone that would have to be divided, and separate livers that were fused, he explained.

Although the twins had individual hearts, they shared an outer membrane or protective sack, called the pericardium.

Both girls needed an artificial sternum, which the cardiothoracic team built out of titanium bars to stabilize their chests, Kasten said. Gore-Tex fabric was used to place a patch over the holes in the pericardium around each of their hearts.

“One thing that we really didn’t know until they were separated and the breathing tube came out was what their chest wall mechanics would be like,” Mychaliska said. “Breathing is a complicated thing that involves your lungs, your diaphragm muscle and your chest wall, and it has to all kind of work in sync.

The team used an innovative intravenous fluorescent dye to guide them when they separated their livers, Mychaliska explained.

“There were not too many blood vessels that went from one baby to another,” he said “ ... An innovation that we observed on their CT scan is that when one baby received IV contrast in her vein, it outlined the edge of her own liver, and marked the middle. We thought to ourselves, it would be great if during the operation, we would know exactly where that line was, so we could divide it.”

The process worked during surgery just as they’d hoped.

Because of COVID-19, the couple waited in the car outside the hospital during their surgery, getting frequent updates. They were thrilled when they got the news that it had gone so well, doctors even had time to construct a belly button for each of the girls.

Sarabeth came home from the hospital first, in late August. Amelia followed soon after, joining her family, their dog and two cats at home on Sept. 5.

Six weeks post surgery, Amelia and Sarabeth have matching scars that run down the center of their chests, forming a question-mark-like shape over their bellies that is likely to fade but might never completely disappear as they adjust to their newfound independence.

They may need additional surgeries as they grow and their bodies developed, but doctors are optimistic that Sarabeth and Amelia will grow up to be just like any other kids.

“Their outlook is really quite good,” Mychaliska said, “especially with their parents. Their parents are really special people. They got the perfect parents for being conjoined twins. Not only because of their commitment, love and support, but because they’re just very innovative and optimistic people. I think that really made a big difference.”

Life for the Irwins is busier than ever now as they juggle occupational therapy and physical therapy appointments for the twins along with diaper changes and feedings, Sarabeth’s oxygen tank and preschool for Kennedy.

But they wouldn’t have it any other way.

“For us it’s been a whirlwind, an absolute whirlwind,” Phil said. “You look back at it, and it’s like man, remember what used to stress us out? It’s perspective.”

As this pandemic continues, “people are realizing how much positive we really need.

“This has been a giant experiment in the power of positive and the power of prayer. You know, so positive news, people need that. People live on that.”